The old man and the arrow

Here we are again. Yawan, myself and Harris the tracker. The dew and cold has soaked through to the bone and the grass seeds have found the vitals on our anatomy as only they can. Glassing the herd of maybe 50 buffalo we did see at least two decent old bulls with hard tops.

We were in the Nkala section of the Kafue National Park hunting area in Zambia. Sounds like fun? Let me tell you that between all the red tape, corrupt officials, Tsetse fly, cold, grass seeds and bad roads did I mention BAD roads, life as a beach-bum sounded great!

We started our safari hoping to get a Lion, Leopard and a good Buffalo with some plains-game as an ad on. It was 1 June 2008. We needed bait and lots of it. Lions do need food to keep them in an area and Leopard needs special titbits to bring in the big tom.

Yawan, being who he is is obsessed with Buffalo. Anything big, bad, black and buff sounds just jiffy to him. I do not know how long my nerves will last with him and his quest for Nyati. We have hunted them in plains, Jesse, mountains, swamp and all other terrain a PH can think of. Give him a choice and he will hunt them instead of any other big five. It is me who has to plead, for us to go after some other game just to get away from those beautiful, black bastards.

We did get a wonderful Common Reedbuck, which went against my taste buds when we had to use it for Spotty bait, as well as a fine Defassa Waterbuck just the day before. The only reason Yawan said yes to a lion was because he knew that Buffalo makes excellent bait for the big cats. The fact that we came here to hunt a Kafue Letchwe was forgotten somehow. 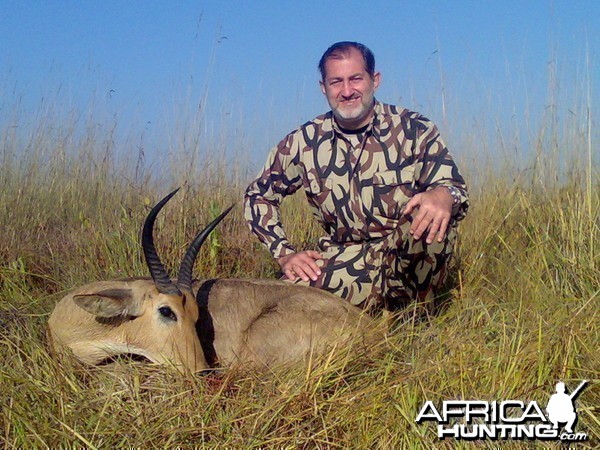 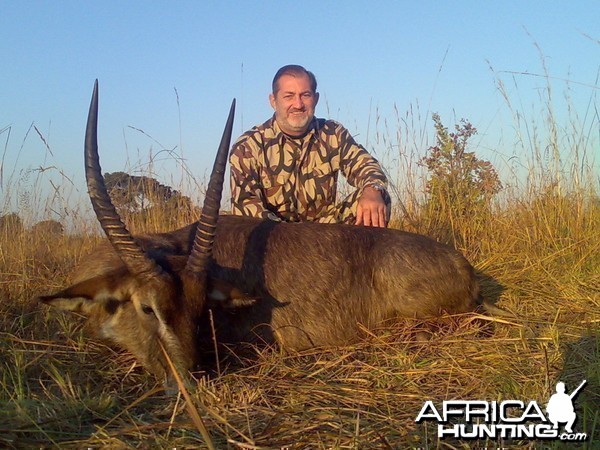 We spotted the herd crossing the road just after we checked the first Leopard bait. As soon as Yawan saw them he got the same look on his face a Bullterrier gets when he sees a Maltese Poodle. As boss of this safari, I got outvoted. If Yawan sees Buffalo all other things we needed to do went straight out the window.

The group was feeding into the wind. The two bulls were all over the place as they drifted and fed between, in front and behind the rest. They settled down some what in a fairly open place and we began the approach. Sitting on our backsides with the bow or rifle on your lap and then going crab-wise closer works very well. You can keep an eye on them and come to an immediate, comfortable stop if one should look your way.

The one bull was lying down chewing the cud. We moved closer ever so slowly. At 40 yards we stopped to asses the final leg before we commit. He was not the biggest bull. Yawan has hunted to many to worry about size. We were looking for any old bull. At 30 yards we got a clear shot at him while some cows were looking at us wondering what we were. I told Yawan that I will try to get the bull to stand up. The chance that he would face us was guaranteed. In a normal voice I spoke to the old man and said (Hey! Get up)

He did get up and stood there with his head high, aiming at us over 4 bore nostrils. The 90lb Hoyt Vecrix came to full draw and the pin was dead on at a spot 6 inches above his brisket. The next thing I saw was the yellow nock disappearing in the bull's chest. He spun around and took the whole herd with him. The 31 inch Easton ACC 371 with a PC 6,3 shaft inside and tipped by a 210gr German Kinetic for a total weight of 980gr has gone full into the old bull.

After the shot we just sat there with me wondering how on earth they can make so much dust with everything so wet. In all my years of hunting buffalo with a bow only about half of them ever gave the death bellow. We slowly got up and looked at each other. No words were spoken. This was what we did and we did it often. My old 416 Rem. was ready and Yawan nocked a new arrow. As we saw the bull no further than 80 yards away lying on his side we came in on his blind side and another arrow went into him to make sure. 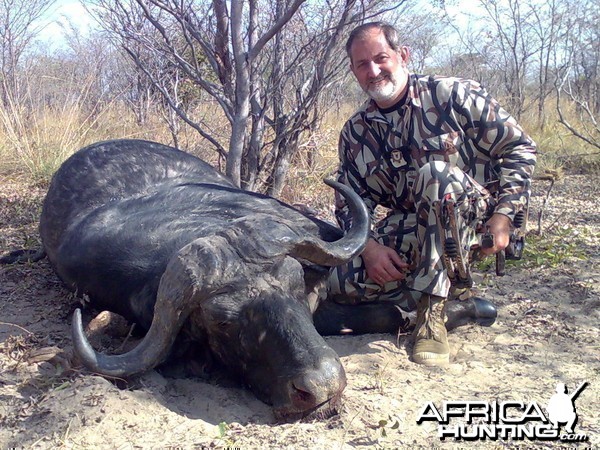 He was old. His one ear looked like my open hand. He had hardly any teeth left. He went to the green pastures where all the old buff go. He would be remembered.

The Lion and Leopard hunt is to be told another time. For now let us just remember the old man and the arrow.

Fritz Rabe
Askari Adventures (Fritz Rabe Bowhunting)
Last edited by a moderator: Dec 1, 2016
You must log in or register to reply here.

The old man and the arrow