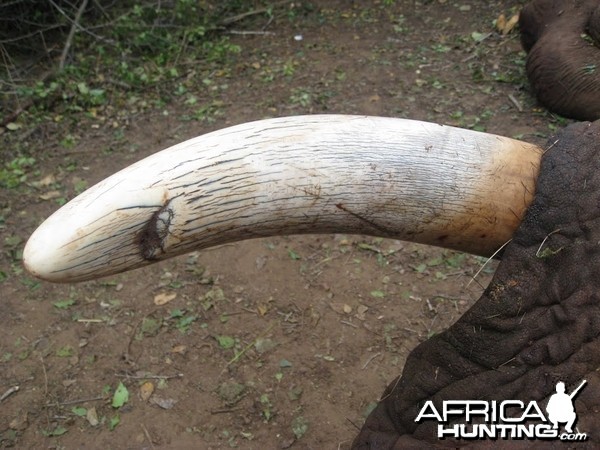 As we climbed down from the truck, the moon was in the shape of an elephant tusk, and Orion, the constellation of the hunter, was bright in the sky. Dave Haydon took that to be an auspicious sign and the excitement continued to build.

My husband and I had decided to go to Zimbabwe just 3 weeks earlier, after hearing that Gordon Stark, our outfitter and PH, had a cancellation. Because Dave had a very successful buffalo hunt with Gordon in 2005 it was impossible to pass up this trip. Gordon works very hard to make every trip interesting and fun as well as successful. I was along as photographer because Dave couldn't get a hunting buddy on such short notice. It was only my 3rd African trip with Dave and turned out to be a physically demanding, yet wonderful adventure. I was very glad I was there. 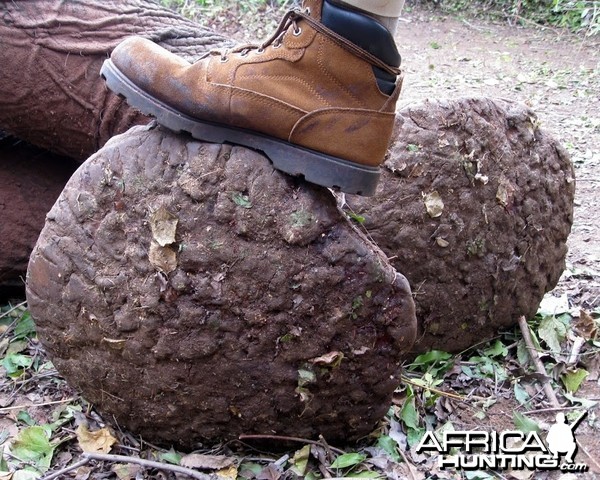 During the previous 5 days we spent time interviewing villagers, studying elephant tracks, roaming dirt roads and fields looking for sign, and waiting in ambush while the elephants went in another direction. On a lonely dirt track, Dave had missed a chance at a big one by seconds and passed on a shot at a small one. One day was spent hiking quickly across veldt, up and down steep, rocky terrain, and crossing streams while hot on the trail of a big bull. We pulled closer and closer and the sign got fresher and fresher. At last we arrived at a stream that bordered a preserve, where we not permitted to hunt. That old bull had out-raced and out-smarted us! And now we would have to start over.

Tomorrow we must leave for home. We spent the morning in the villages and scouting the back ways for a hint of tracks. Elephants had killed 6 people in the last 4 months we knew they were in the area. But where? Gordon sent people out in all directions in hopes of finding fresh signs and news. From all the information gathered, it sounded like there were two likely locations and it was decided we would set up in a cornfield that afternoon. The trackers spread out and we waited and waited. In the early evening we were told that two elephants tried to cross a road and head our way but were frightened off by a car. So, we waited again while watching the sun set and the moon rise. 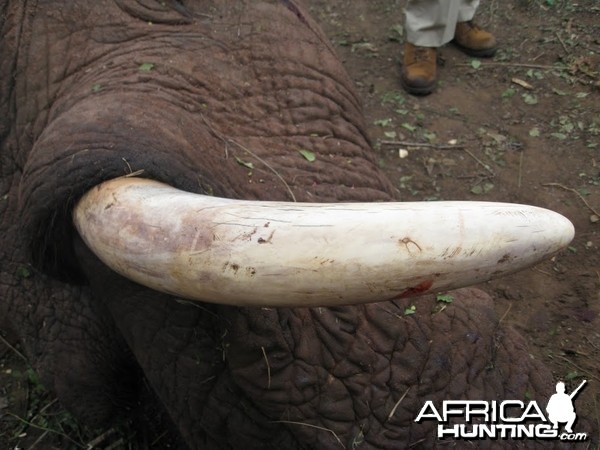 Suddenly, we received word that a large bull had been spotted in a cornfield about two miles away. We rushed to the trucks and were off on a fast and bumpy ride. When we arrived, there were a dozen villagers waiting to show us the general area. However, we wondered if we could find anything, even something as big as an elephant, in the dark.

We walked down a little dirt road and then left the villagers in a safe spot while we forged on. Dave and I were counting on the great experience that Gordon and his team brought to the hunt. We also appreciated their hearing and sight, both excellent compared to ours. As we walked through the fields, we seemed as noisy as a whole army because we were stepping on dried corn stalks. With its big ears the bull surely knew we were headed its way. 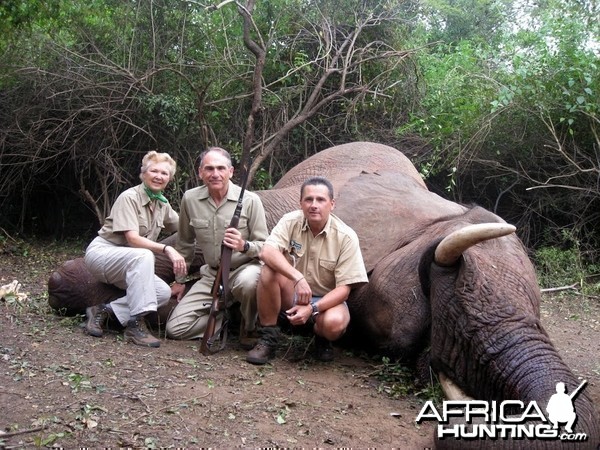 At last a large light shadow showed in the dark and was stationary as we approached. In the dark it was hard to tell how far away we were, but Gordon and Jeb thought we were pretty close. Dave stepped to the front and prepared to shoot his 375 H & H. Gordon told him that Jed was going to shine a light on the elephant and Dave should shoot immediately. He needed to hit him just behind the shoulder, into the lung and heart. Jed turned the light on and there he was, a big bull about fifty-five yards away and facing us. As soon as the light went on, he started turning to our left and Dave shot. Was it a good hit? It was too dark to be sure. Gordon took a backup shot but the elephant was spinning away and then Dave took another shot for the spine. He must have missed the spine because the animal kept going. The elephant ran and disappeared in the dark. Even with a perfect shot, many animals will run for long distances before dying. Was this one fatally wounded?

His trail was found and carefully followed. No blood. Wait! There are some red spots on those leaves! And so we followed. After a few minutes it was realized that some of the leaves had a red pigment that naturally showed up at night. We backtracked to where we had turned off and found the true trail again. 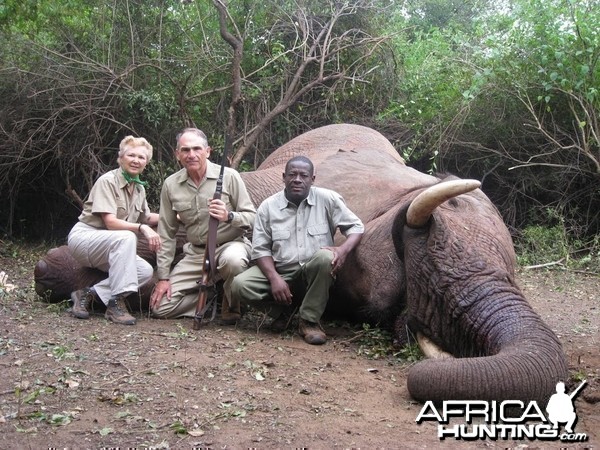 Hiking through 250 yards of downed corn stalks, crossing trampled barbwire fencing, and tracking across a field, we occasional spotted a bit of blood. Shouldn't there be more? We finally arrived at a thick wall of heavy shrubbery and trees. There was blood on the ground and a bit on the branches. Dave, Jed, and Gordon all had their guns ready.

Gordon and Dave slowly stepped forward. Gordon used the barrel of his gun to move a few branches away and see what was beyond. There was the elephant, facing us from just feet away on the other side of the leaves and branches, lying on the ground and exhaling his last breath. He had gone into the brush and turned so that he could charge us when we arrived. Thank heaven weå£‡ lost the trail for a few minutes! The great bull died quickly because Dave had made a perfect shot to the lungs and heart area. 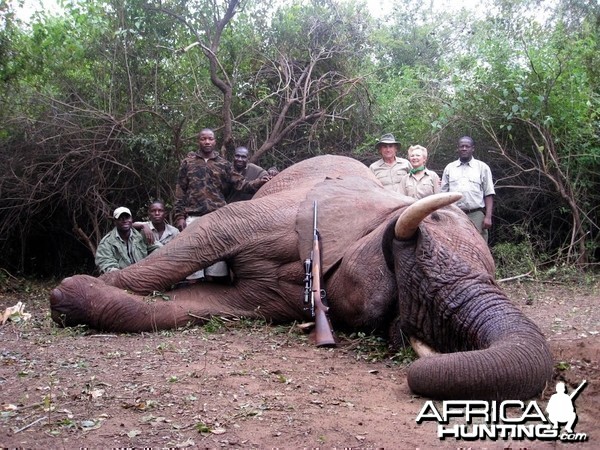 The blood bubbled out of his nose and mouth as he exhaled, and we couldn't help but feel sorrow at the loss of such a magnificent animal. As a sign of respect, Dave performed the tradition of Letzter Bissen and placed some greenery in his mouth, representing his last meal.


We send a sincere Thank You to Gordon Stark of Nhoro Safaris, Jed, Pierson, and all the team for an exciting adventure. 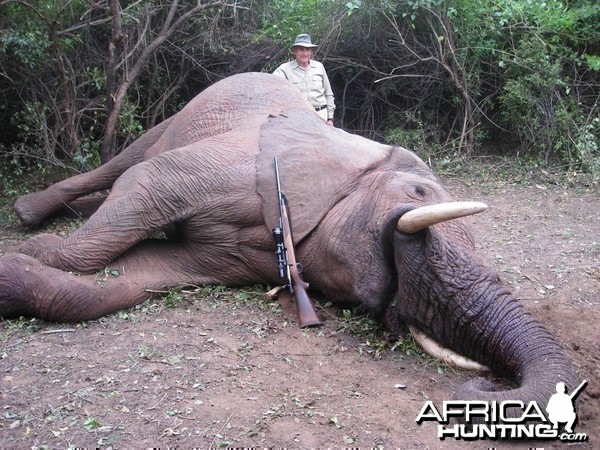 Last of the Botswana Elephant Hunts

Buffalo Hunt For The Books!
2 3

Thursday at 7:35 AM
BAYLY SIPPEL SAFARIS

Elephant in the Jesse