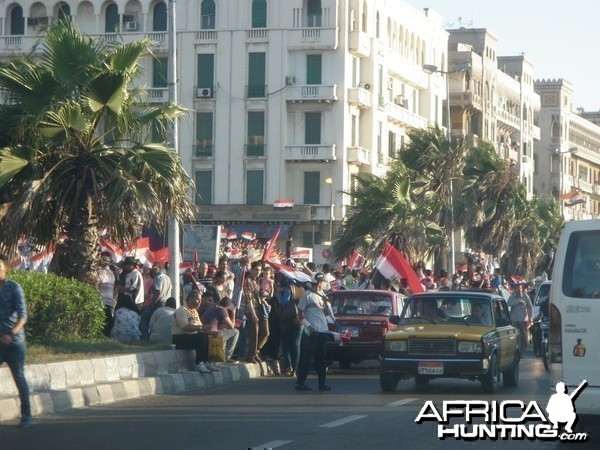 By the time the US State Department announced that all non-essential US citizens leave Egypt following the resignation of former President Muhammed Morsi, Global Rescue's security personnel had been on the ground for nearly a week, advising our members and preparing evacuation routes.

During this time, protests coordinated by supporters and opponents of President Morsi led to massive rallies and violence that resulted in a number of deaths, including that of at least one American.

To support our clients, Global Rescue's on-the-ground security specialists directed communication between members and their home organizations. Global Rescue's members - including a number of individual travelers, students participating in study abroad programs, and corporations- all received detailed security advice from our deployed operators.

Throughout this entire period, Global Rescue's intelligence analysts provided our personnel with detailed reports on developments throughout the area, which were quickly shared with each of our members in the region. Global Rescue's security advice included information on planned demonstration locations and actionable recommendations for traveler safety.

Faced with the possibility of continued instability, Global Rescue prepared evacuation resources and established unique rally points for each of our members and clients in the region.

On July 7, Global Rescue's security personnel escorted approximately sixty members to a privately chartered aircraft and evacuated them to safety.
Last edited by a moderator: Dec 1, 2016

i dont know if you can share this. but did you have any incidents where your staff was threatened, or put at serious risk, by people demonstrating in Egypt. th situation looks confused in media reports. but quite often the news stories dont capture the real "mood" - they just give an instant glance at one location.

Great to hear from you, I am glad you took the time to ask for further information. Unfortunately, I cannot comment on any specific incidents or risks that our staff experienced while in Egypt. I do recommend though the below excerpt from a Boston Global article highlighting the operation:


"By the time Egypt's president, Mohammad Morsi, was ousted from office in early July, Global Rescue, a Boston security company, had been on the ground in Alexandria for a week, monitoring protests and identifying the best routes out of the city.

So when a Washington company called on the firm to bring its workers home, Global Rescue's 11-man team quickly loaded 60 people into vans, drove them to a hotel outside the city, and put them on a plane back to Washington.

It wasn't a nerve-wracking escape like the one depicted in the movie "Argo," said the former Navy SEAL who led the evacuation, because of the carefully devised plan that avoided roadblocks and crowds of protesters. In fact, he said, "It was pretty cut and dry."

To read the full feature story on Global Rescue in the Boston Globe, please take a minute to go to our blog

Yes - glad to know it went well.
It's good to know what your firm does.
Do you primarily do evacuations for staff from consulates, or do you also do private companies as well?

Thanks again for your outreach. I would definitely recommend looking further through our website and blog to become more familiar with the company. Global Rescue works with a number of different government contractors and academic institutions, as well as numerous public and private companies that vary in size from Fortune 1000 to small retail businesses.

I will send you a PM - just for reference.

It's good to know what you can do. If hear that someone in Africa needs help and evacuation in a crisis zone - I will gladly point them in your direction. I'm sure your services will be needed in the future.

cheers,
Upepo
You must log in or register to reply here.

Keep informed while you travel this season

Global Rescue Deploys To Uganda For Member With Cerebral Malaria