We took off for Zimbabwe on June 12th, getting to our final destination on June 14th. We went with Impondo Safari's in northern Zimbabwe, about an hour south of Victoria Falls airport. Impondo owns 10,000 acres fenced, and leases another 60,000 acres open range. Our PH, John Greeff was at the airport to meet us. As you all know, it was a long trip but I was able to get some sleep on the way there.

My hunting companion, Scott had hunted last year with John and had taken his lion. He was after an elephant this trip and I was after a Cape Buffalo first, then we would see. Since we had 12 days, we started with the elephant on the 15th. Scott and I had discussed had said all along that he wanted me to back him up on his hunt. Of course I was willing and super excited.

First morning leaving lodge I spotted something ahead of us in the road and I thought and said "cheetah"! Sure enough, two cheetahs ahead of us and the PH was really excited. He said they hadn't seen any cheetahs for a couple of years. Good luck, I thought.

After traveling an hour into some rugged territory we started seeing elephant dung in the road, littered all over the place. I was amazed. I told the head tracker I think the elephants wait until they get to the trail then poop! He laughed. Lots of tracks in the road also. Stopped and looked at some fresh tracks, walked up the road for a ways and then we heard some commotion in the bush. I didn't recognize the sounds but they said elephant. Sounded more like growling to me but into the bush we headed. Scott had his father's Krieghoff double in .375 flanged. I had my Browning A bolt in 375HH and the PH had a bolt action Mauser in 458.

We went in a couple hundred yards and could still hear them. The tracker stopped and said to back out. They were headed to the road. We rushed back to the road and backed down quite a ways. It was pretty funny, we bent down and could see elephant legs but the brush was so thick we couldn't see the bodies. Wasn't a couple seconds later out a couple came, one young bull. He turned and looked at us. He looked huge at 40 yards. His ears were flared out and we froze. He eyed us for a few seconds and then busted back into the brush. There was a couple small groups there and 15 or so crossed the road. They didn't seem too spooked but there wasn't a big bull in the group. A very exciting introduction to Africa and elephants.

We saw lots of sign and another small group of cows and calves. Many other animals but nothing worth going after so at dark we went back to the lodge. Plenty tired on this first full day of hunting.

Next morning we were at it again and an hour after daylight we saw a few elephants in some more open land. The group of elephants were a half mile from the road but heading our way. The trackers said all cows and two small bulls. Exciting but nothing to go after. Lots of miles today and checking out tracks and water holes. Around 11am the trackers spotted a big bull track in the road. Off we go on a chase as we are not far behind. We come upon some real loose watery dung. We follow for quite a while and they realize that we must have been winded as they are moving faster and we won't catch up to them. This stalk took about 2 hours. We stopped for a drink of water and went back to the truck.

We hadn't gone a mile when we saw a few cows near a water hole right from the road. We stopped and heard more commotion and saw another group a half mile away. The brush was shorter and more sparse and that group looked huge. Cows and calves said the tracker and PH. A larger waterhole was just down the road so we headed for that. Parked the truck and walked the last hundred yards. This waterhole had a bank on one side so it hid our approach. We peeked over the edge and saw another elephant on the opposite side, only 150 yards away. PH sat down and we watched. Another small bull came to water. Pretty exciting watching these guys and they didn't seem to notice us.

Then we saw another huge elephant coming through the brush. It was big but I thought another big cow. PH had his glasses on it as it was 500 yards away. As soon as it cleared some brush and he got a look at the tusks, the hunt was on. He gave Scott and the tracker the thumbs up/ We used the bank as cover and headed his way. I assumed he was going to water but we believe he was heading to the noisy cows behind us. Single file we went and the bull was quartering to us still on the move. We were getting close and then the sticks went up. The bull noticed the extra movement and he stopped and turned, ears flared and looking right at us. I was 5th in line and a little to the left of the line. Scott got on the sticks and I thought he was going for a brain shot. He didn't shoot and the bull was getting nervous. He swung to turn and bang, shoulder shot from Scott. I thought, shoot again. I sensed something was wrong and time seemed to go in slow motion. Scott was doing something with his gun and the PH fired. I immediately fired as he was quartering away now. He was hit hard but moving. Since Scott and I had studied shot placement in a booklet he had, I knew the next shots needed to be in the tail section. I racked another and aimed at the tail, racked another and shot in the same place. He dropped in the back. Scott and John quickly closed in on him and one more shot and he was down. Whew, that was an introduction to Africa!!!

All downhill from there. Two days later the trackers picked up a single big buffalo track and we started following them. The head tracker and assistant tracked that bull through some pretty rough stuff where I couldn't even see a track. He joined a small herd and we could see him but couldn't get him separated. We got within 85 yards and they busted. We kept after them and finally got him in the open. He was facing me and PH put the sticks up. About 100 yards and I hit him good. He lunged and was off. Other buffalo around him so I couldn't get a second shot in. We found his track and he was bleeding a lot. I thought he won't go far. Half a mile later we jump him. I fire two more and one connected. He wasn't done though. We circled around and I was trying to load more ammo while keeping up with the PH. Scott was right beside me and had his Winchester 70 in 375 HH. He said take his and we swapped guns. I was able to close the distance to 50 yards and clear shooting. Two more and he was done, bellowing before the final shot. And I thought the elephant was tough. Those buffalo are too. He was an old bull that the PH said had been kicked out of the heard but went back on occasion!

Two days later, after many miles and lots of animals, we pull up to the mile long airstrip they have on the property and spot a group of six Impala's at one end. They were about a half mile away so we go on foot in the bush on one side of the strip. We keep checking and close the gap to 260 yards. They were mock fighting and moving making it hard to decide which one was the right one. PH kept telling me which one. Up on the sticks I take the shot and down he goes. They were pleased that I got him, as I was too. Sticks are not as steady but I had practiced quite a bit and was pleased. Nice pretty Impala.

We hunted and covered a lot of ground the rest of the hunt and saw lots more animals, both on and off the private property. Really looked for a Kudu and Eland but nothing big enough. It was a great experience and saw many new things. Took one day and toured Victoria Falls which was nice. Also our local Safari club sent us over with a Blue Bag which had a few items for an orphanage, and money for groceries. We went to Hwange and grocery shopped and took the food to the orphanage. They already had received some of the elephant meat and that was drying in one section of the open air building. This place was more of a food bank where local children could get fed. They needed it and appreciated everything.

I turned 65 on June 21st during the trip. They made me a birthday cake, had six and a half candles on it and our server sang happy birthday to me. It was a memorable birthday.

The weather was great, 70-75 during the day and 45-50 at night. Great sleeping weather in the open air thatched roof chalet's we had. Not a cloud in the sky and bright blue skies everyday. Hardly any bugs and didn't see any snakes. 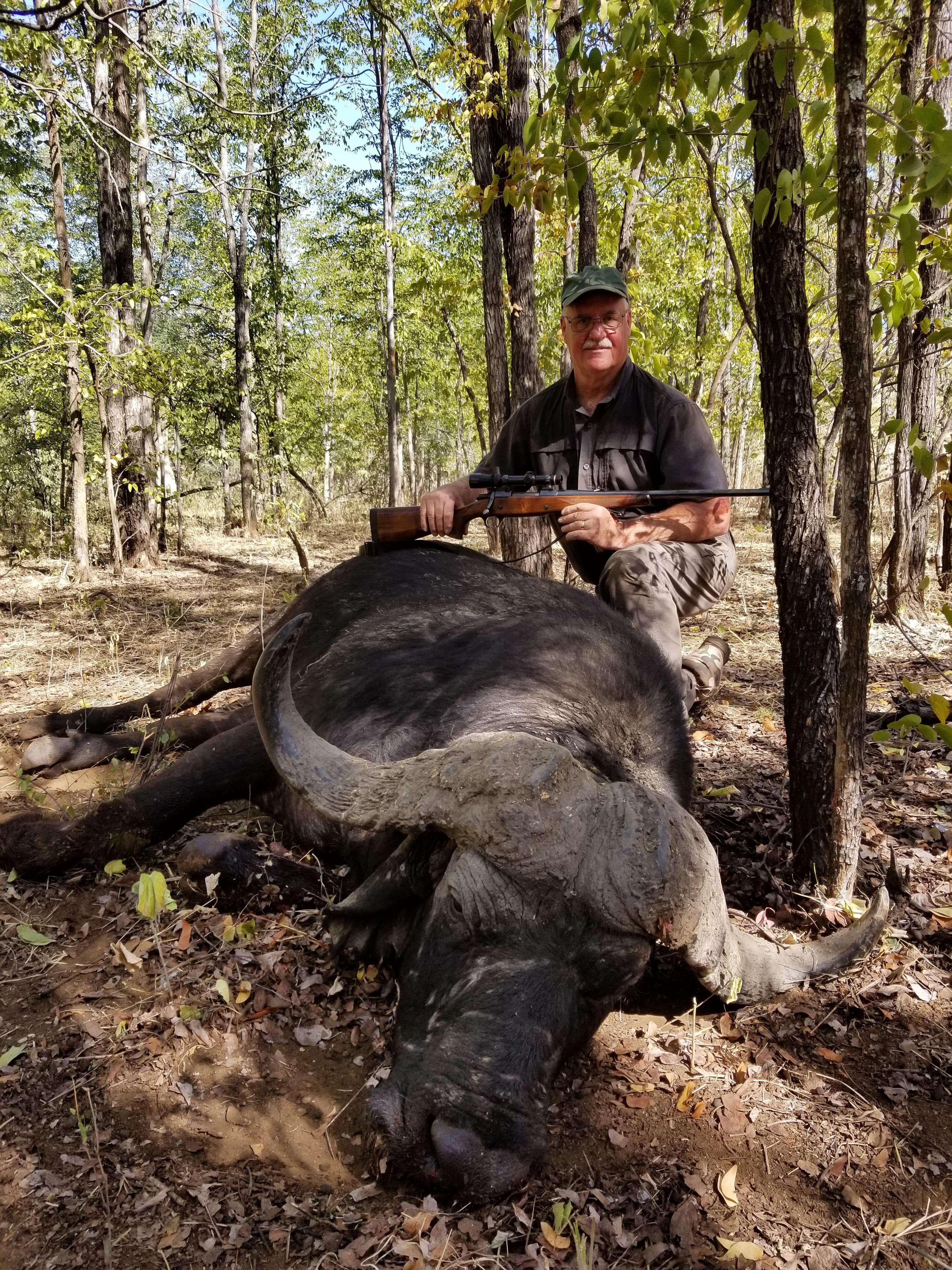 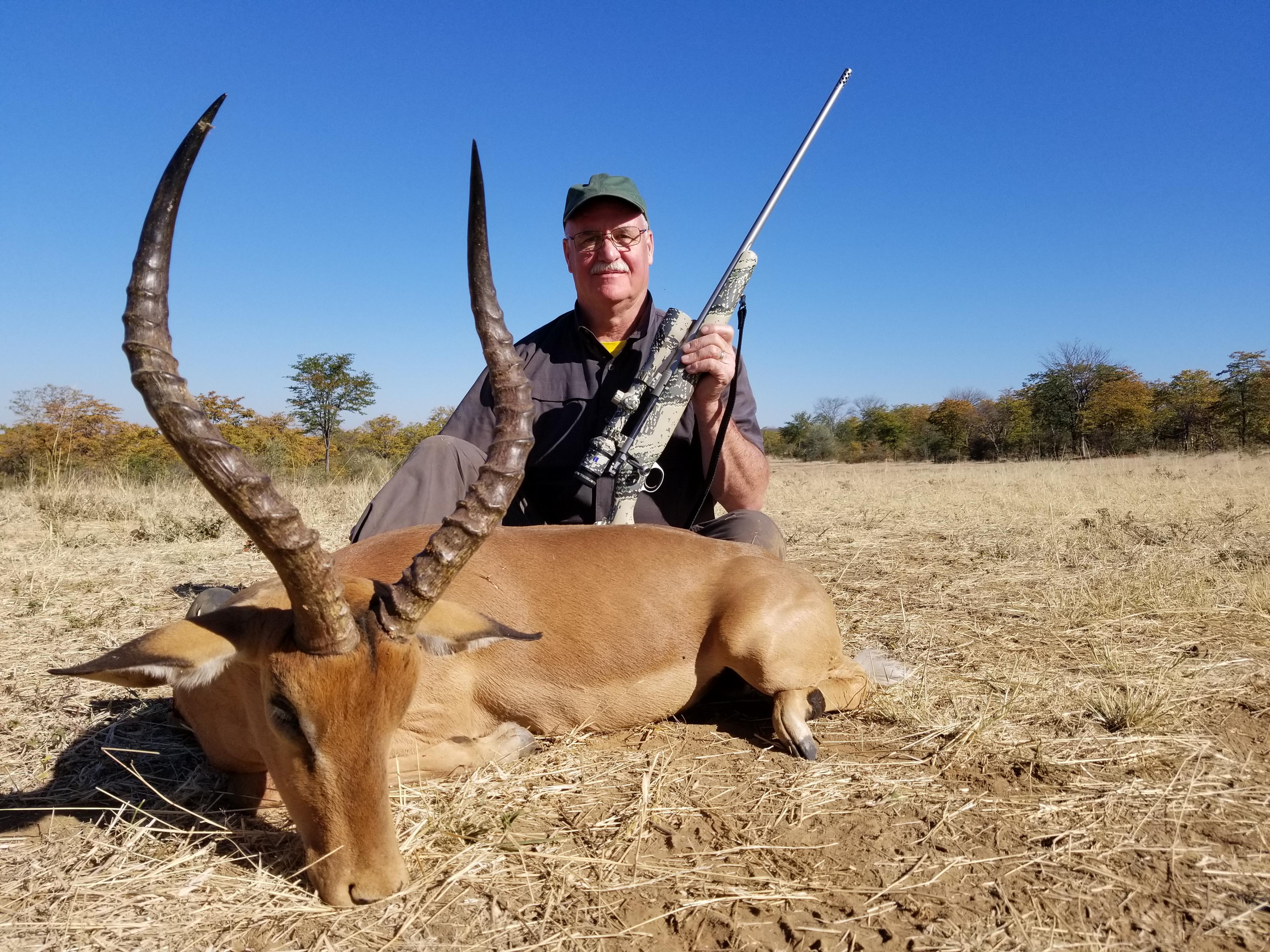 Nice Buffalo! Sounds like a great time of year to hunt Zimbabwe.

WOW! What an exciting first Africa adventure! Congratulations on a couple of fine trophies! But it sounds like the hunt itself, as always, was the true trophy! Thanks for sharing such an exciting time!
Africa on my mind.

Great Buff, congratulations and thanks for sharing the adventure!

Thanks for sharing your hunt.
You certainly had some incredible experiences with your friend. Congratulations.

Congrats on a great experience, and very nice trophies !

Thanks for sharing your story. The weather sounds perfect!
Captain of the Luddite Society
https://www.africahunting.com/threads/zimbabwe-hunting-the-bvc-in-zimbabwe-for-buffalo-john-sharp-safaris-exceeding-expectations.53046/

Perfect weather and a great first hunt....you'll never forget it!

Great Buff. You did have a good hunting. Thanks for sharing.

Awesome Hunt! I’ll be hunting the Deka Tail safari area next month, which it close to the area you were hunting.

Nice old Cape buffalo!
You must log in or register to reply here.