Well I'm two weeks back from Africa so I'd better get busy and write some thoughts down before it all becomes a blur!

I was scheduled to retire for the third time on July 1st. Having failed at retirement twice before, I thought that scheduling five weeks on safari would ensure that the event took place. Imagine my surprise when my company asked me to stay on until November 1st even with 5 weeks off in Africa! I guess if someone wants to pay for your retirement party you may as well let them!

Since I'm a buffalo hunter we're going to start with the buffalo hunt even though it was sandwiched between the two plains game hunts. The hunt was booked with Charlton McCallum Safaris in the Dande hunting block on the Zambezi river. The area borders Mozambique to the East and Zambia to the North. Our PH was Len Taylor. For those of you who enjoy the safari shows on TV, Len is no stranger. Len is one of the old school Zim PH's, an incredibly talented hunter, a true gentleman, and above all humble and unassuming. Most importantly, my wife was very comfortable hunting with Len, and as this was to be her first buffalo, that was a prime consideration.

Below is a picture of Len looking out over the valley. It is incredible country with fantastic buffalo, elephant and cat numbers. 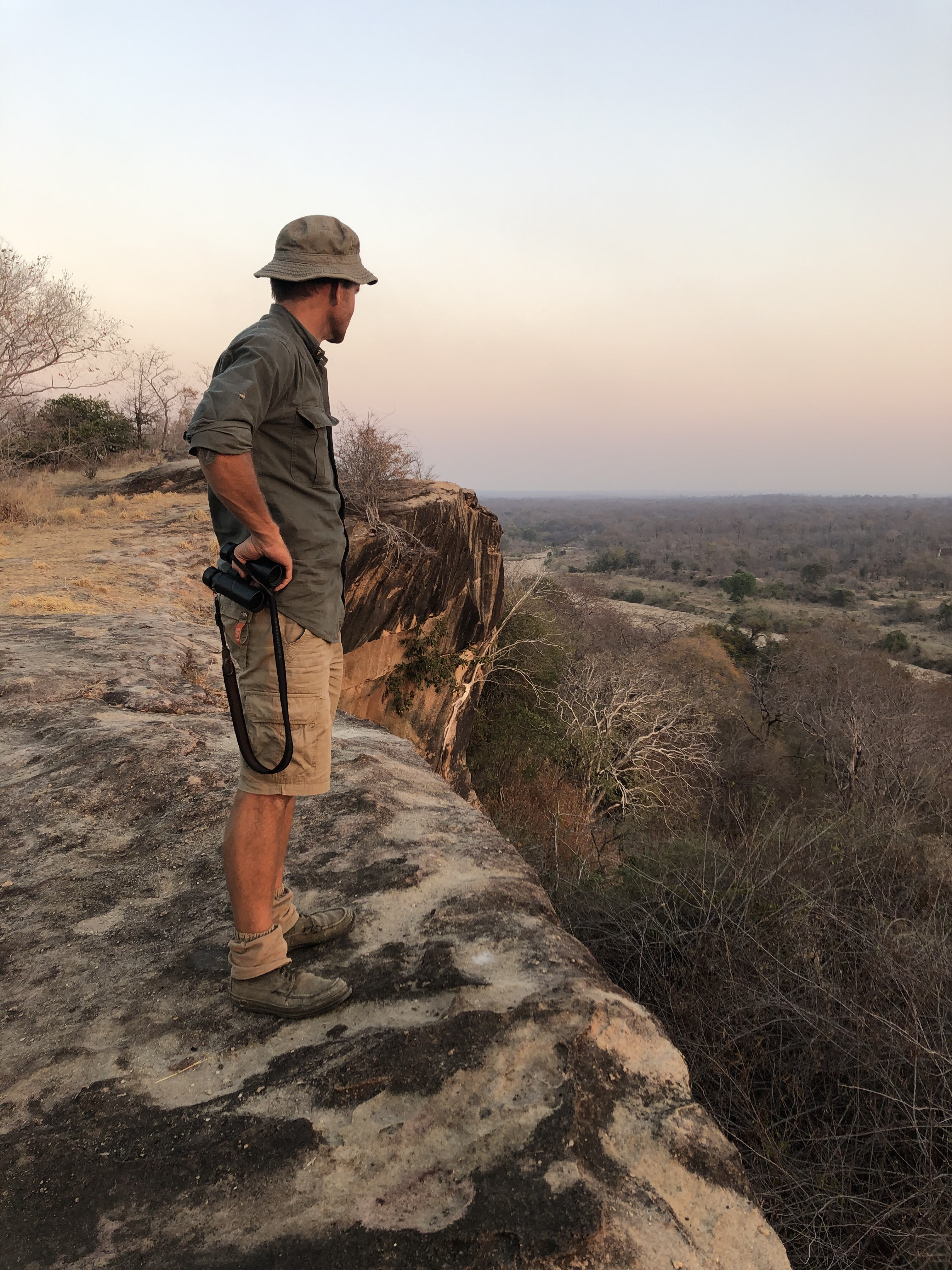 We flew in from Harare in a 206. I loved every minute of it, however my wife, prone to motion sickness, had a very different experience. We flew over prime farmland for the first hour of the flight. Having grown up on a farm in Canada and being in the Ag industry, I was saddened to see the ruin that Mugabe's land reforms had left the country in. They have truly turned a land flowing with milk and honey into a wasteland. I hope that the future brings positive and I will leave it at that as this is a hunting story, not a political diatribe.

Len was at the strip to meet us. We loaded our gear into the cruiser and embarked on the 45 minute drive to camp. The drive convinced me that we had made the right decision on this hunt. This is truly remote country and encompasses nearly a million acres of prime big game hunting. This meant that buffalo could be hunted in the way they should be hunted, tracking on foot, and the chances of running into any human activity or boundary that would impede them or us was remote.

We were staying at Mururu Camp. A classic Zimbabwe bush camp with thatch roofed huts on a dry riverbed. The camp was well situated, well maintained and well run. We were grateful for the efforts of the cook, who did an outstanding job with the game meat, but also provided excellent salads, fruits and vegetables in the meals. For those who have been on a meat and potatoes diet on safari, you will understand how nice it is to have a more balanced approach to dining! As usual, there was a great selection of fine South African wines that are notably absent in our liquor stores! 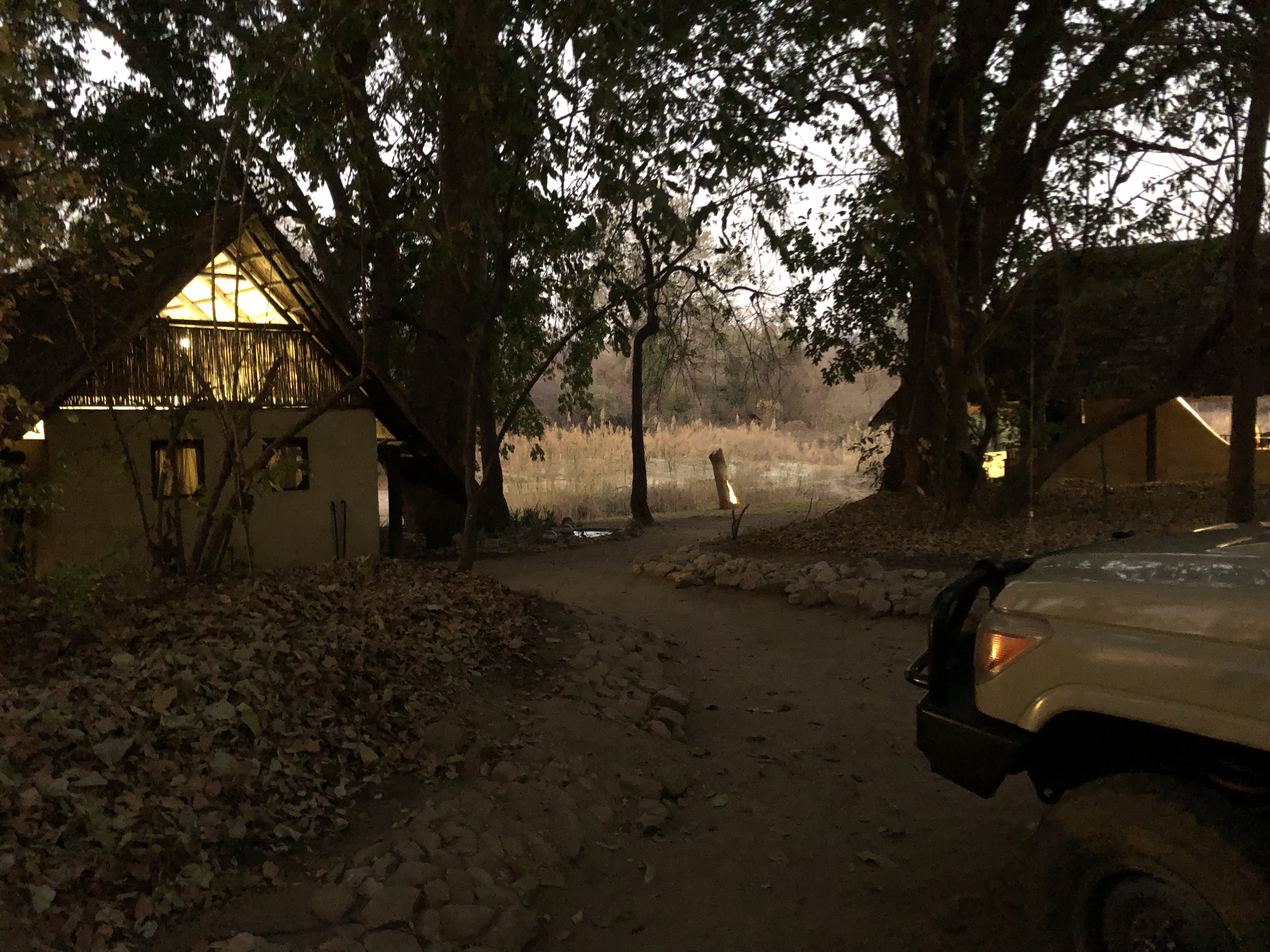 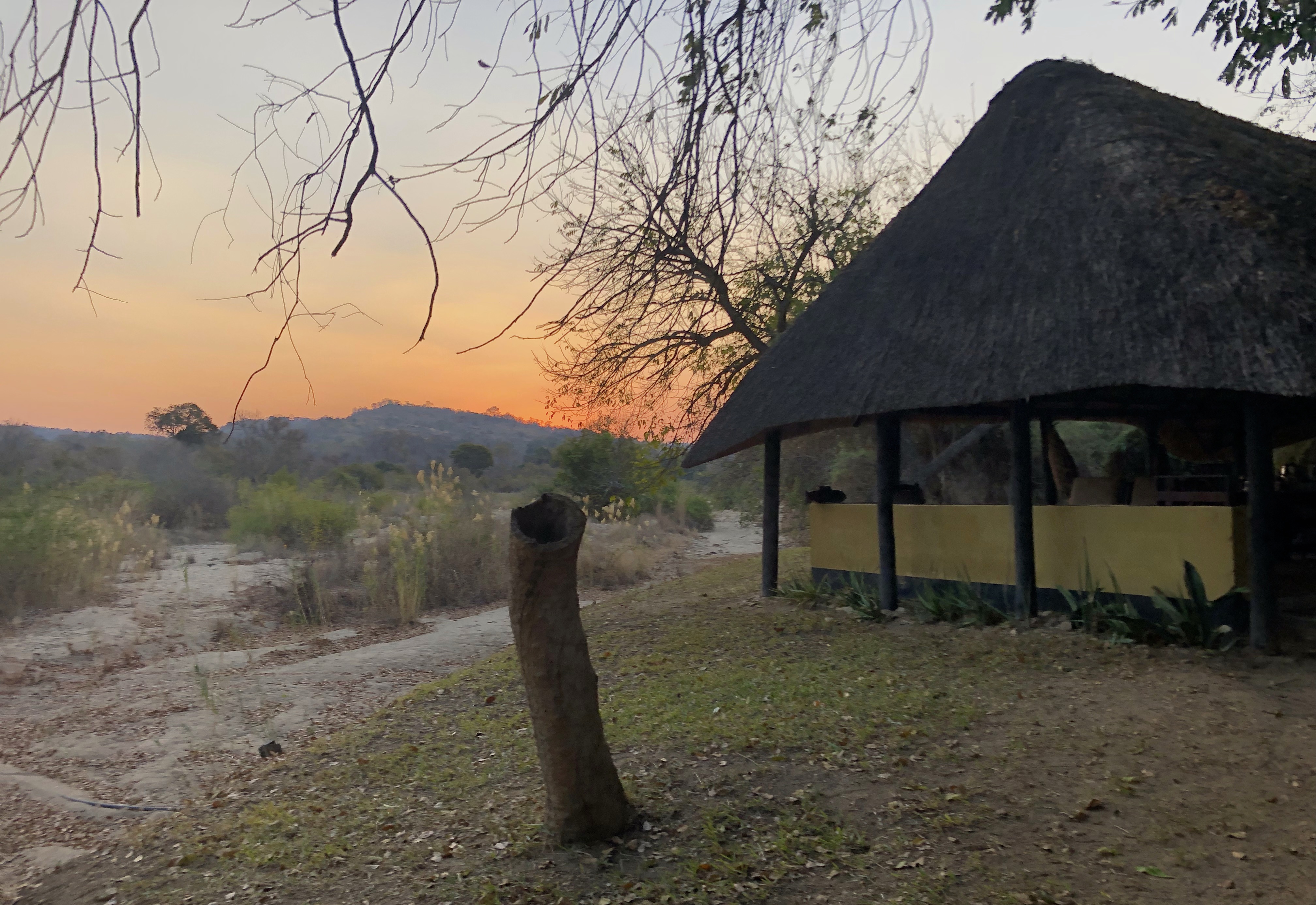 The first morning started as I wish all mornings did, with a cup of coffee drunk around a fire. After a light breakfast we were off to see what the day would bring.

It being her first hunt, we decided that we would hunt until Sue was presented with a good killing opportunity. I would hunt my buffalo when she was done. We cut tracks early and were in a herd after about a four mile follow up. It was fun to watch Sue as we worked in tight and were pinned by curious eyes. Until you've done it, it is difficult to understand the excitement of working in tight on buffalo. Len hunted as well as I've every seen anyone do it, circling ahead of the herd, finding opportunities to move in, and above all being patient and cautious. Eventually the late morning winds began swirling and we backed out.

We quickly re-engaged in the afternoon and worked the herd until dark. It is likely that I could have shot, however, we were being particularly cautious to get Sue a very high quality shot. As stated previously, this was her first buffalo, and it was the first time either of us had seen a 9.3x62 used on the big bovines.

Day 2 was a carbon copy of day 1. We were quickly into buffalo, worked them all morning, ate a bush lunch and rested until the afternoon winds settled in, re-engaged and worked the herd until dark. If there is a better way to spend a day I don't know what it is! 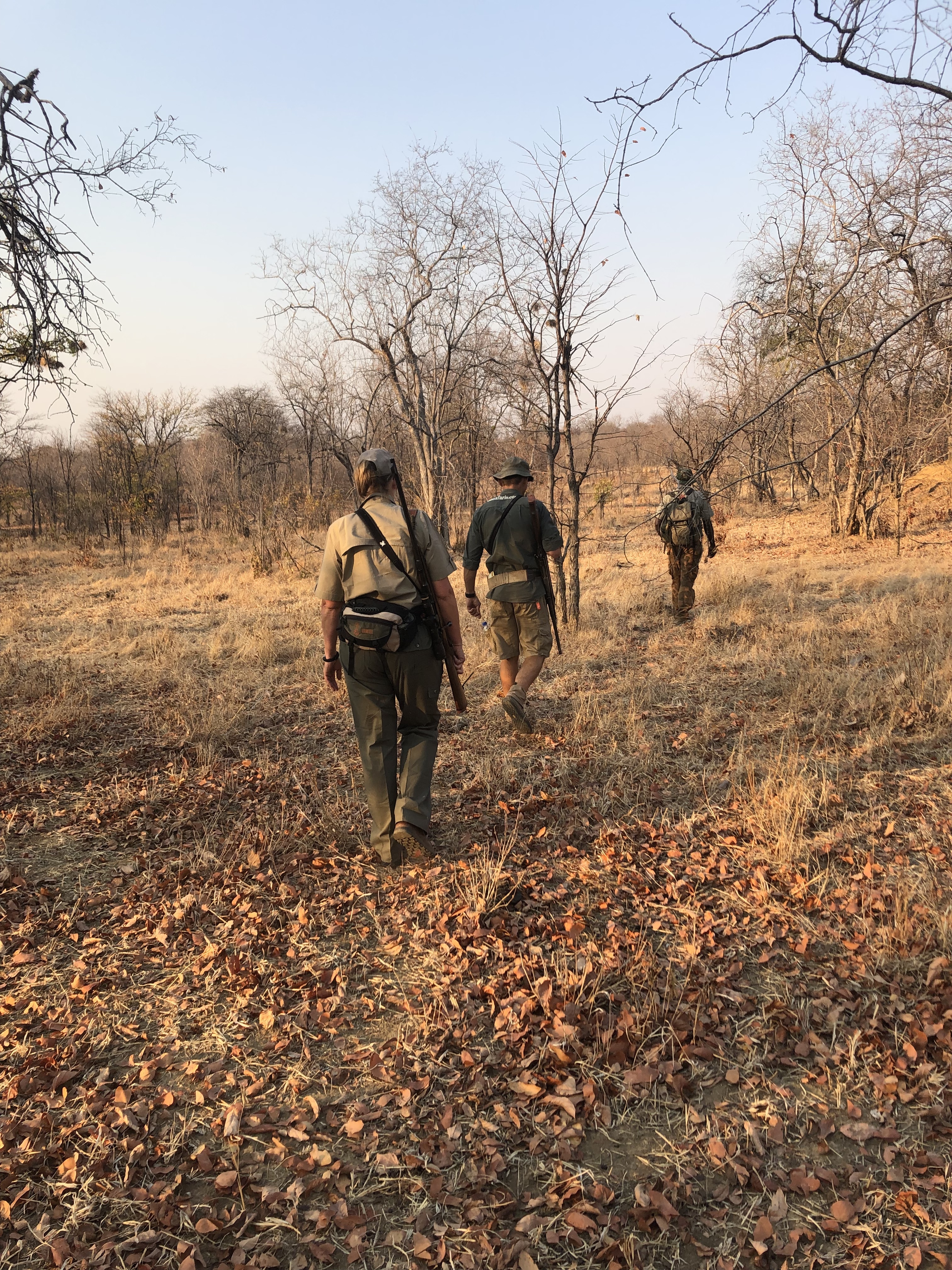 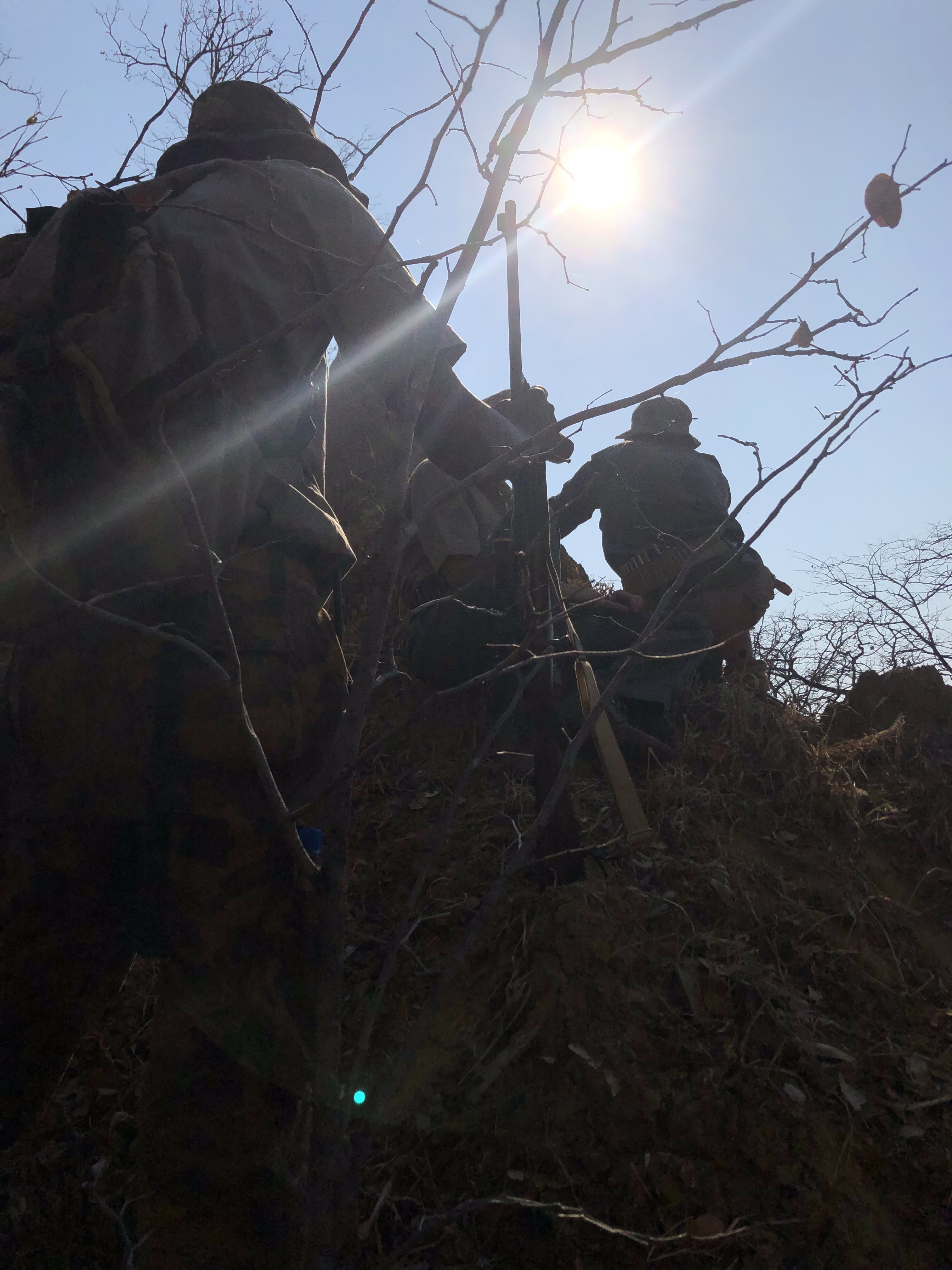 An attempted bushwack from a termite mound!

Day 3 began properly with a cup of coffee around a mopane fire. Once again on tracks early we were off. Unfortunately the winds became unstable early in the morning. After bumping a herd with a particularly interesting bull twice we decided that we needed to back off. About halfway into a five mile forced march back to the cruiser we suddenly pulled up sharp as we had bumped into a particularly old warthog. Having already shot an ancient pig on our first safari, Sue declined the shot. I took one look and decided that this pig was going down! I borrowed Sue's 9.3 and it was quickly in the salt. Perhaps not the biggest pig in the world but very respectable and a truly old rascal. 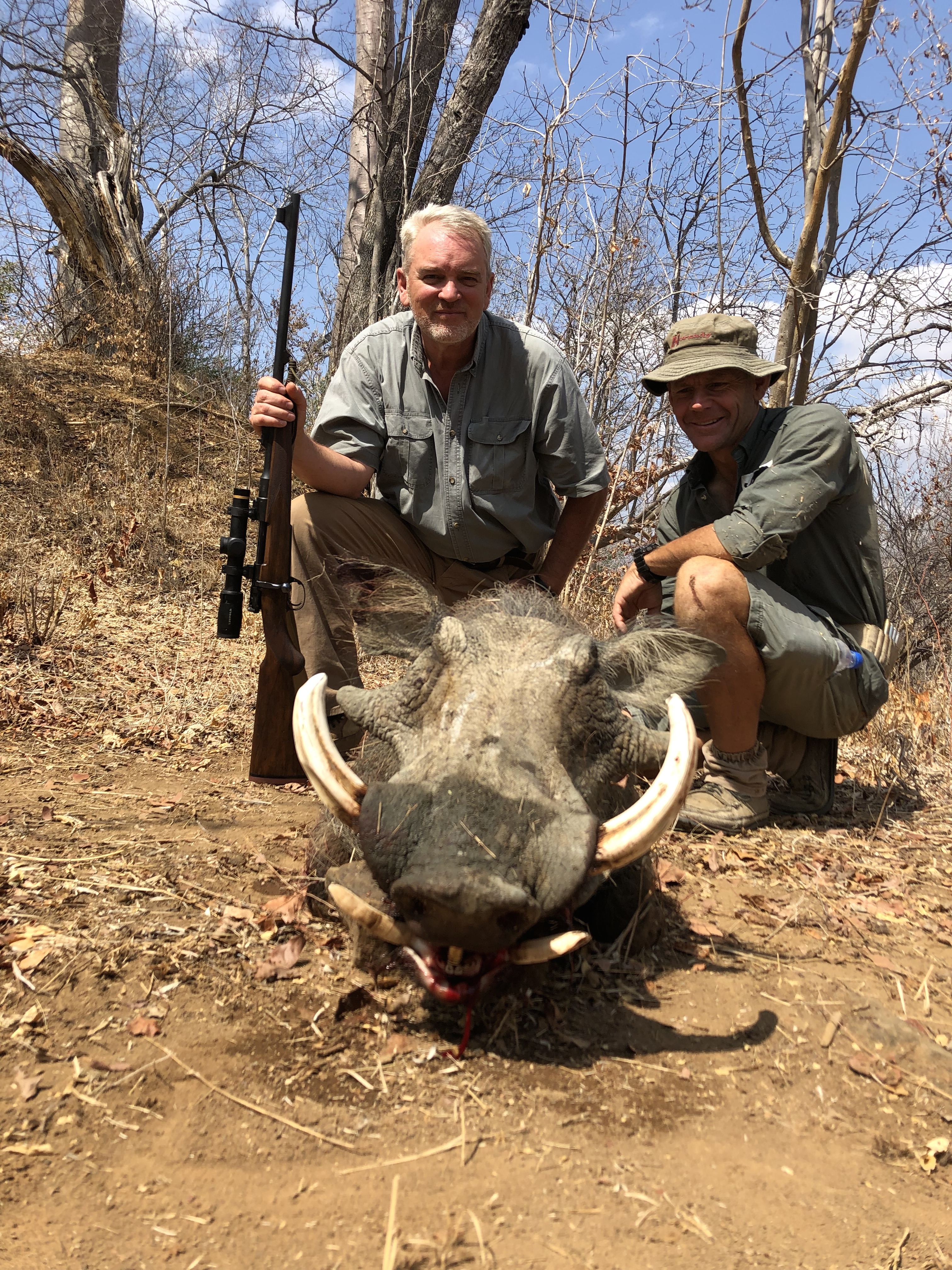 We had been pushing so hard (35 miles covered at this point early on day 3 in very rough terrain) that part of me was looking forward to the break that the pig would provide, man was I wrong! The guys each grabbed a leg and they were off. If anything, we were eating up the miles faster with the pig in tow than we had been previously!

After returning to camp with the pig and to grab some lunch we were back out for the afternoon hunt. This is the only time we went out after buffalo that we did not make contact. The speaks loudly to the exceptional quality of the area, the PH and the trackers! 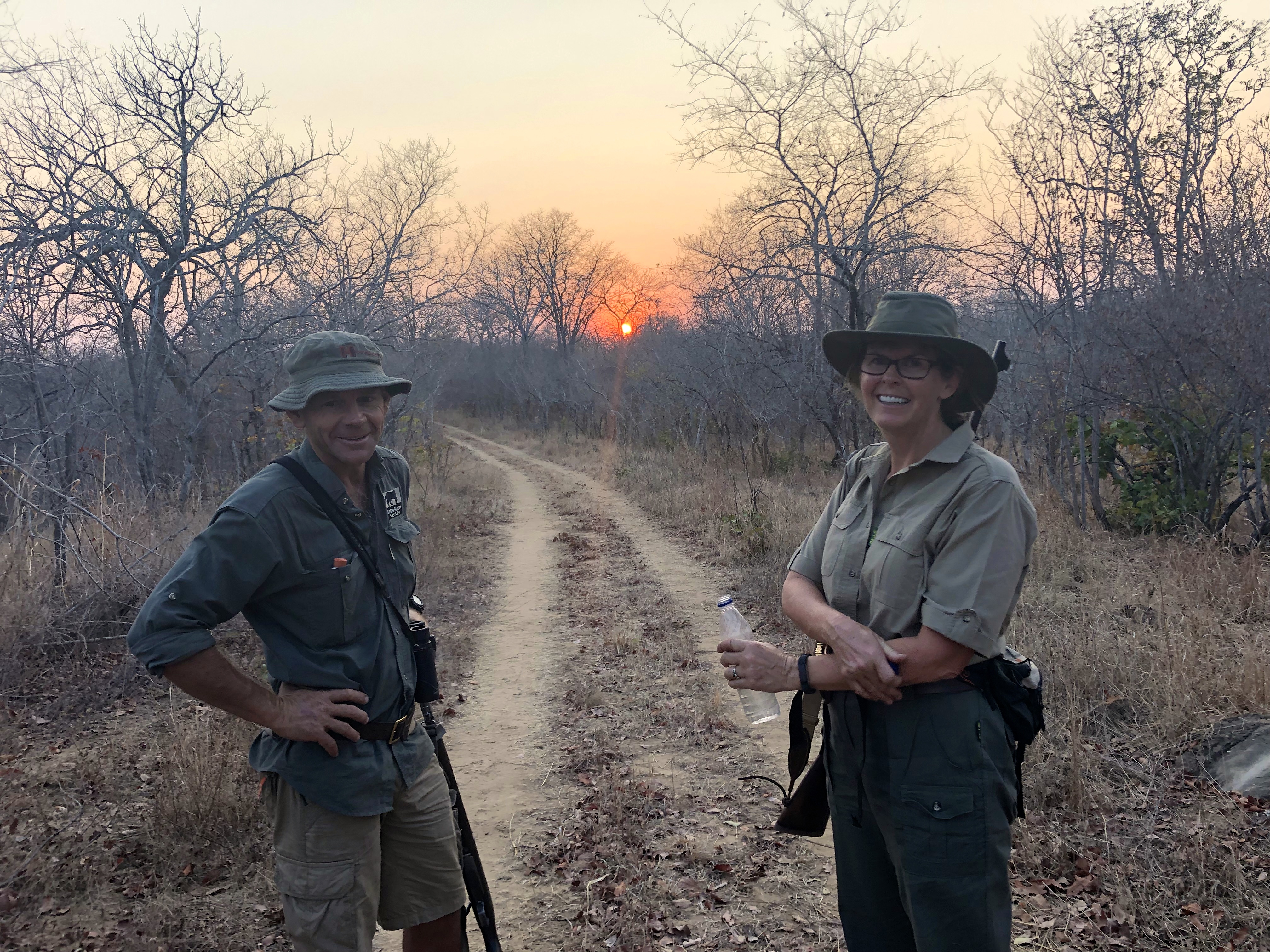 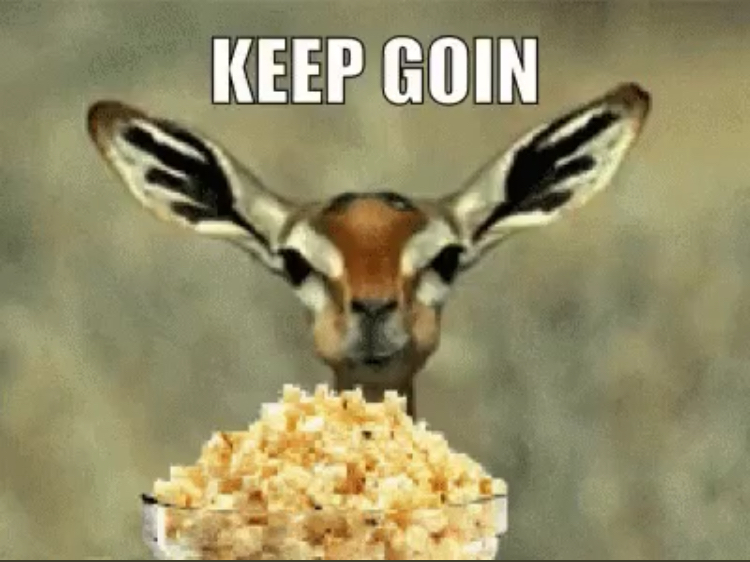 Day four began like the three previous, but somehow it felt different. Perhaps it was just an underlying belief that continuing to do the right things would eventually bear fruit. We were once again on fresh tracks relatively quickly. Roughly five miles of tracking brought us into contact with the herd. An hour of cat an mouse put us ahead of the herd as they filtered through the trees in front of us. The valley is extremely dry and dusty this year. The dust the herd was putting up created an almost surreal movie set effect with buffalo emerging from the mist, filtering by in front of us, and then disappearing into the mist ahead. Sue was on the sticks, Len on the binos and then it happened. An old bull came out of the mist, head down, following the cows in front of him. Len told Sue to take him if she was comfortable. Sue went down on the rifle, I saw her tense for the shot, and the bull was down! As quick as he was down he was back up and gone before a second shot could be fired. The reaction caused us some concern as this is often an indication of spinal shock, however, the shot looked good and Sue felt good about it. Our tracker, Charles, took up the track and we were quickly satisfied that it was indeed a killing shot. The bull was pumping large quantifies of blood that was spraying 3 to 4 feet to the side of his track. Suddenly there he was, laying in a wash, done. Sue paid the insurance and we all just looked at each other, 3 1/2 days of tracking and stalking covering in excess of 40 miles had culminated in a perfectly placed shot and a clean kill. I am very proud of Sue, she hunted properly, worked hard and shot cleanly! The 286 grain bullet from that little 9.3 smashed the on-side shoulder, went through the heart and lower lungs, and lodged in the off-side shoulder. Typical swift A-Frame performance, 96% weight retention and a perfect mushroom! I have to make a plug for Rigby, that little Highland Stalker weighs 7.8 pounds bare, regularly puts 3 shots in 1/2" at 100 yards, and has very manageable recoil. I am a big fan of the rifle and the cartridge! 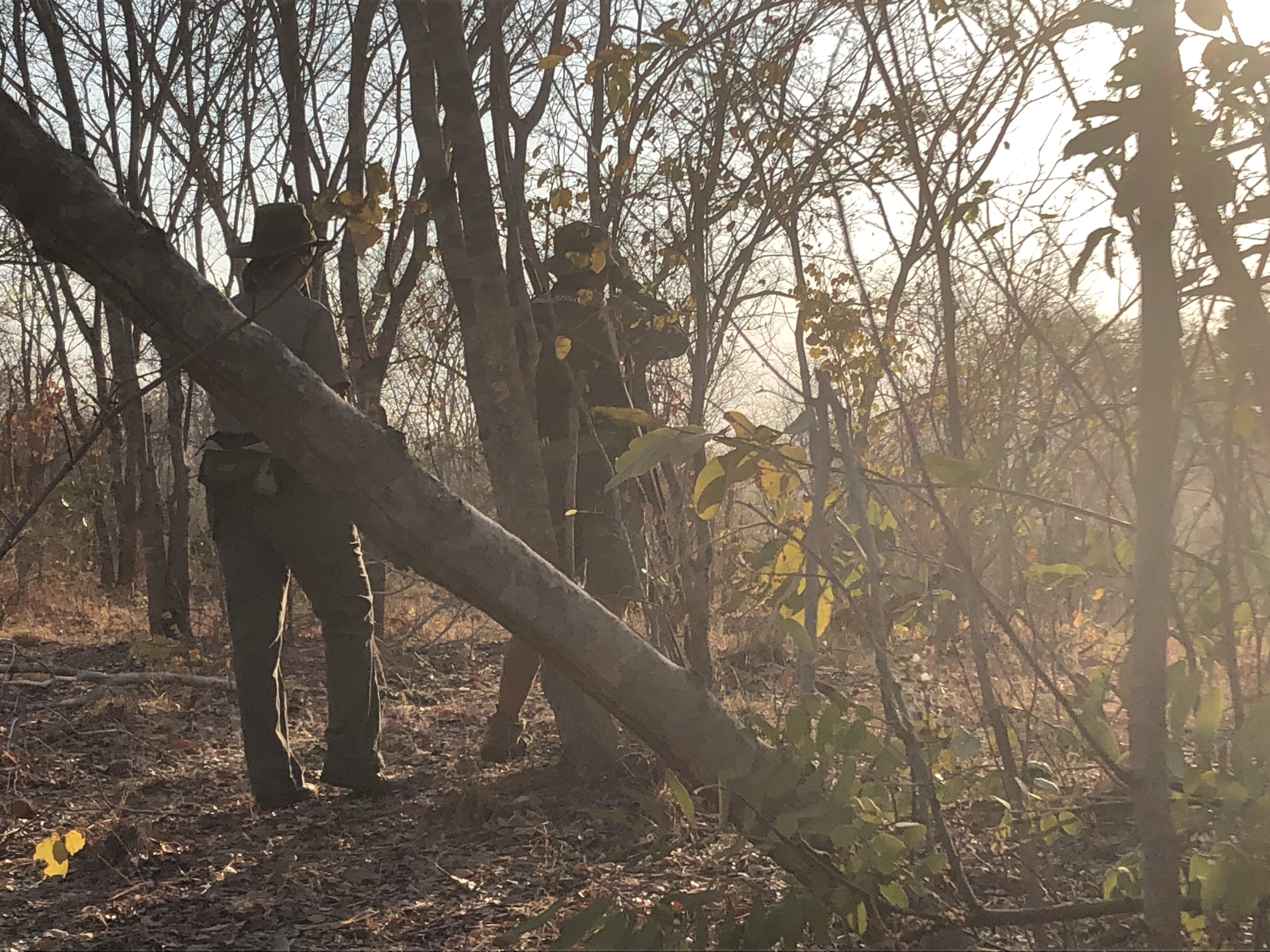 Immediately after the shot! 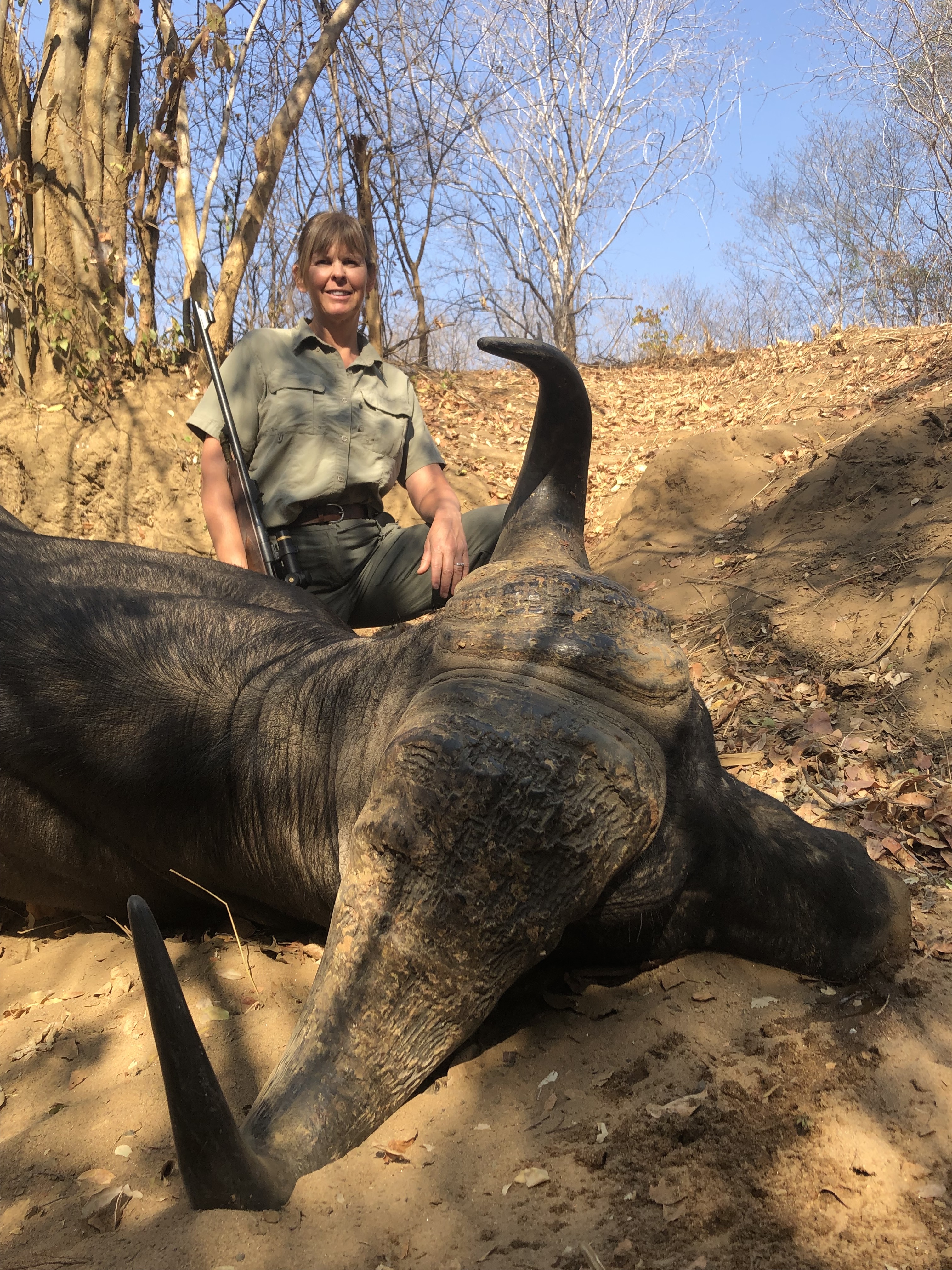 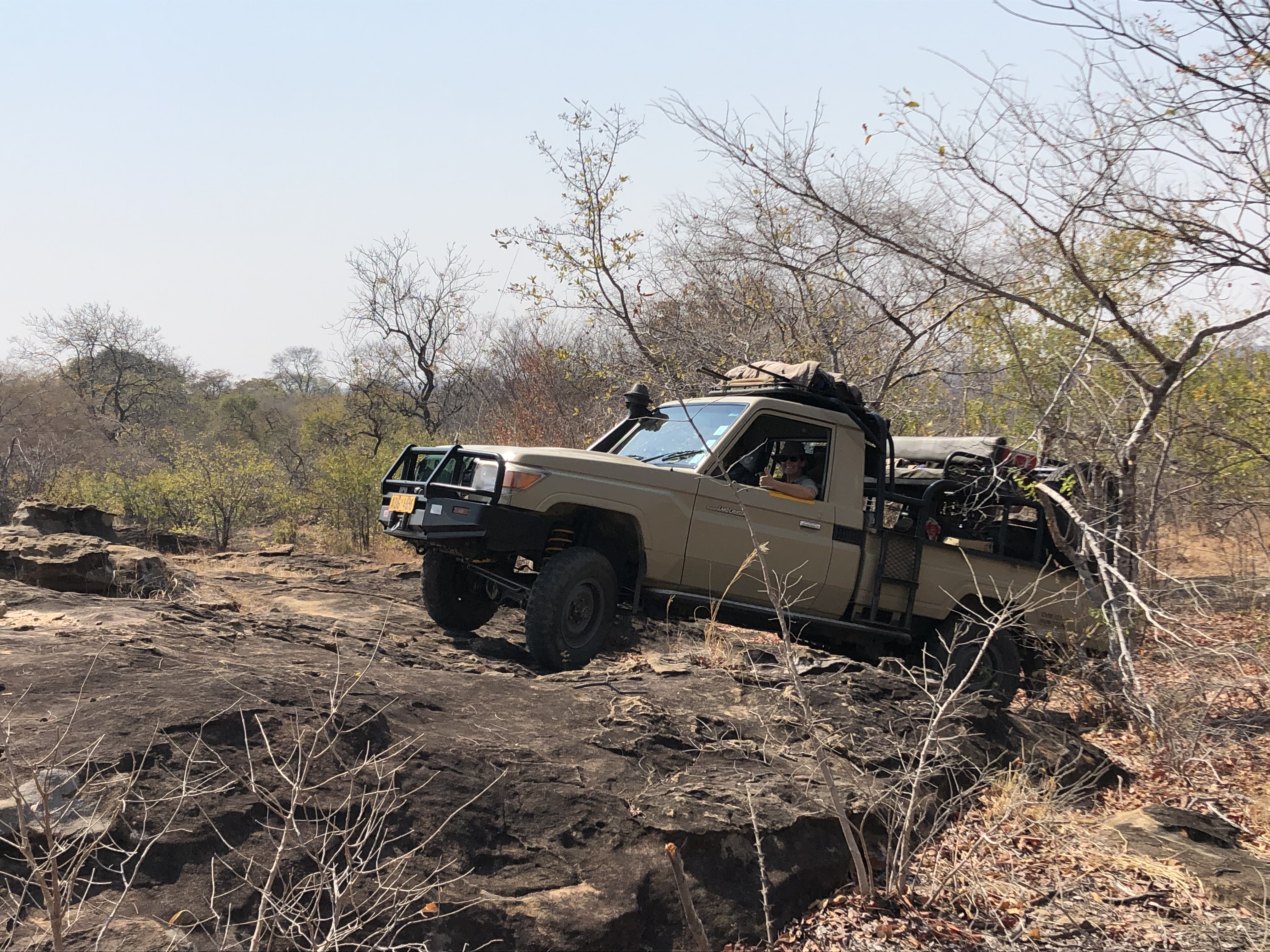 Recovery, I sure wish we could buy these cruisers in the USA! It's hard to believe that there is 1,500# plus of buffalo in the back of that rig!
Last edited by a moderator: Sep 14, 2019

It seems to me that if this is your third time to retire, you may want to try to pull it off a few more times before you finally throw in the towel! It seems to be working out for you and the wife quite well!

What a grand experience! Your little lady did exceptional! Lucky guy!
Africa on my mind.

Well done. Congratulations
Tommorow is promised to no one. Go live your dreams.

Outstanding! What a great bull and to do it in the care of one of Africa’s truly legendary PH’s. And darn well told as well.
"We sleep soundly in our beds because rough men stand ready in the night to visit violence on those who would do us harm" American Novelist - W. Churchill

Fantastic hunt report! Congratulations to Sue, she must be happy.
"When my friends tell me that I have led a remarkable life, I have to admit having done my best to make it so" - John Kingsley-Heath

Congrats to all on a great Buffalo. Enjoying the report.

Congratulations on a nice bull, the 9.3x62 is one of my favourite rounds. Looking forward to the rest of your adventure.

Beautiful bull! Congratulations, hard work always pays dividends!
"Montana seems to be what a small boy would think Texas is like from hearing Texans" John Steinbeck

Great buff and congratulations to Sue and the entire team!

Now get back to writing...

Enjoying the read!! Congrats to Sue on the buff and a nice pig also!
John 3:16

Well, that pig is quite nice too

Congrats on a great buffalo Sue. Keep the story going.

Wonderful looking bull, congrats!
You must log in or register to reply here.

SOUTH AFRICA: The Tootabi Hunting Safaris Report & Hunt Of a Lifetime In The East Cape
3 4 5