I arrived in Southeastern Zimbabwe with my PH from Somerby Safaris, Charles Humphries, on the afternoon of May 18th and met their Zim concession partner and staff at their remote camp adjacent to a very large national park. I was here to hunt an old dagga boy and a leopard. It was my second time to hunt Nyati and my first time for Mr. Spots. While remote, the camp was very comfortable and the people very friendly. This felt like a truly wild place, different from my past experiences in South Africa. Not any judgment about one being better or worse, they are just different.

We cut the tracks on my dagga boy the first morning of my hunt and followed them for about 20 minutes where we first encountered him. However, he did not present a shot, so we followed him, ultimately back into the park. Fortunately, we cut his tracks coming back out of the park the following morning and followed him until he bedded. We left him until late afternoon, where the trackers picked him up once again. We were following his tracks until we heard elephant stomach noises. The PHs said we would go a bit further, but would have to call off the stalk if we did not find him soon as the elephant there are aggressive. Fortunately, we encountered the old bull feeding. I placed my Model 70 in 404 Jeff on the sticks, centered on his shoulder and fired. At the impact of the 400 grain tsx, he bucked and then came charging. I don’t believe that he was charging us, per se, as I don’t believe that he knew where we were. He was charging wildly at the shot at about a 45 degree angle towards us. My shot had taken out his heart. He was dead, but did not know it. We put in four more shots before the old warrior lay still and gave us his death bellow. My God, how I love hunting buffalo! 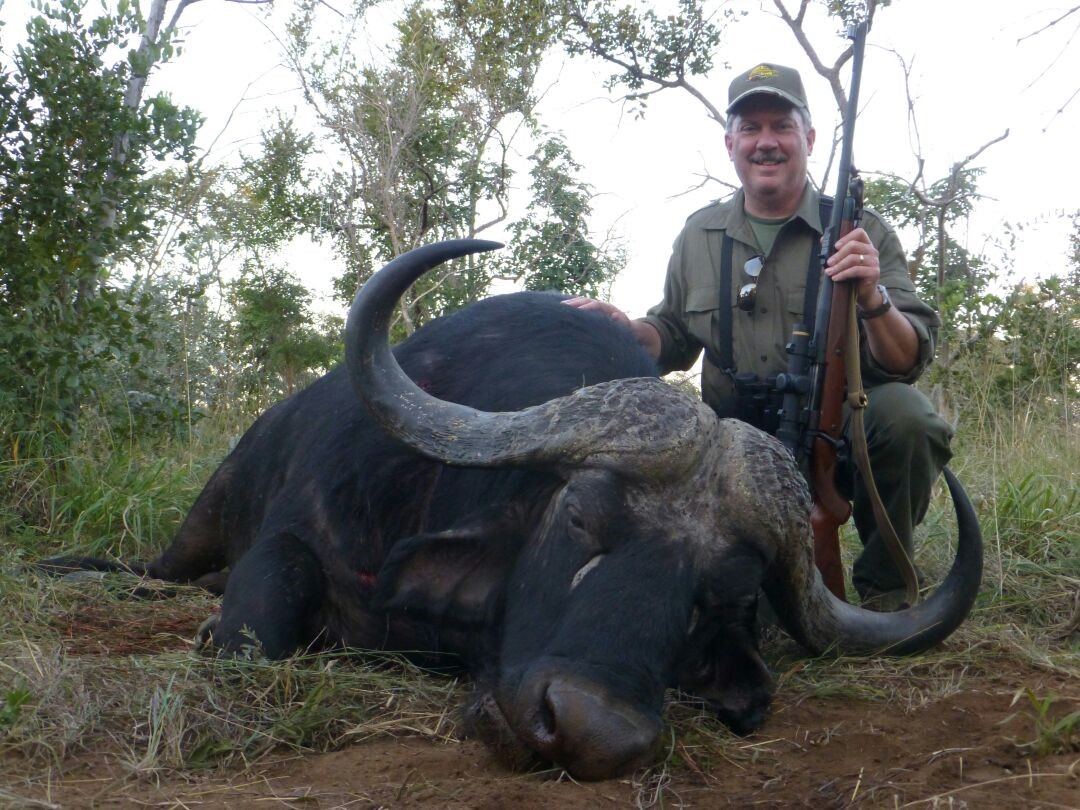 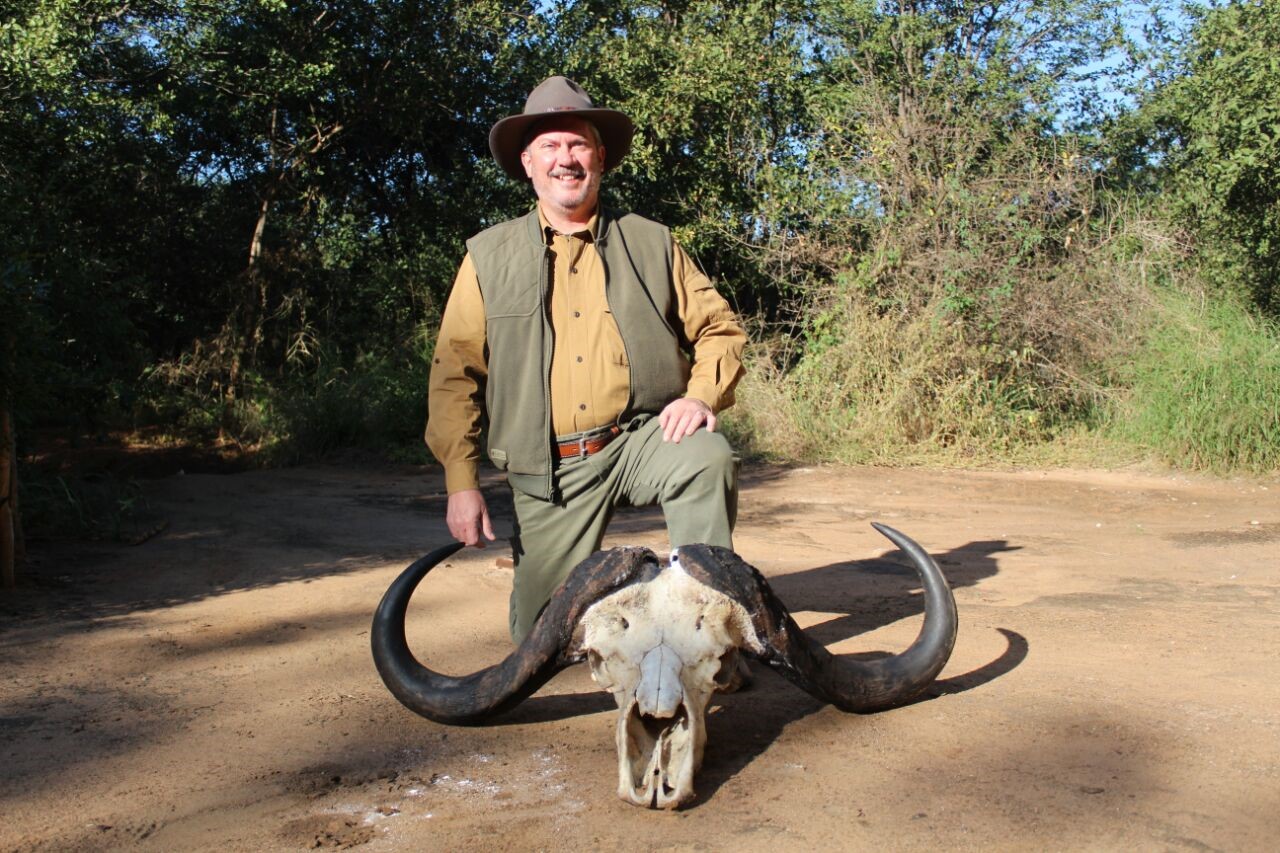 After harvesting my dagga boy on the second day, we focused on leopard in earnest. Two hunting areas had been baited before my arrival, but we hung new baits the next couple of days. We settled into a routine of checking baits in the morning and dragging them in the afternoon. This continued until the morning of the 7th day when we had a strike. The baits were all hung in trees near pans. The pan near this bait was called the buffalo pan. Hence, I called this tom the buffalo pan leopard.

The staff built a blind that afternoon and we returned at 4:30, prepared to sit. Around 6:30 we heard the tom approaching, giving his “huff, huff, huff” call. The PH tapped my leg once, meaning the leopard was approaching and to be very still. We waited for what seemed an eternity, but he did not climb the tree. It seemed he had sensed us and knew we were there. After a couple of hours, we called the truck to try an old trick. We left the blind, made a commotion and then sent the truck away again. No more than 10 minutes later, we heard the tom approach from behind us, go around our right side and climb the tree. The PH tapped me again, meaning to move forward to the gun. I did, and he turned on the spotlight. I searched in the scope but could only see the bait swinging. He had left the tree. We tried the trick one more time that evening, but the wary cat would not come in, having been educated by us.

We checked the bait the following morning, and determined our tom fed after we left. After much debate, we decided to sit in the same blind for fear that constructing a new one in more favorable wind might really send him away. Again, we came to the blind at 4:30 and prepared again for the sit. We heard the cat stirring in the area after dark, and then he came straight toward the blind! We heard him come to the front, then around the left side and stopping at the back, so close we could hear him breathing and sniffing our scent! My heart was pounding in my throat but I dared not move! Eventually the cat moved off and, again, we called for the truck. I thought surely this would not work again, but it did! Shortly after sending the truck away, we heard the tom climb the tree. He fed slowly at first, then aggressively. The PH tapped my leg and I moved forward to the gun. Many thoughts were racing through my mind. We had changed to a red filter on the light as we were concerned the white light would spook him. Could I find him in the scope? If I did, could I make the shot? Then the PH tapped my leg again and hit him with the light. I picked him up, but he was crouched behind the bait. He stood and lifted his right leg to take a step down the tree when I squeezed the trigger on my 300 win mag. I reloaded when I recovered from the recoil and listened. We had heard the cat fall to the ground and I felt the shot was true. We heard him run off and then silence. After 15 to 20 minutes, we followed up and found him lying still, 30 yards behind the tree. We laid eyes on him – a very large, very old and clever cat with tattered ears and many battle scars. I feel very fortunate to have taken this old, wary tom on my first leopard hunt. 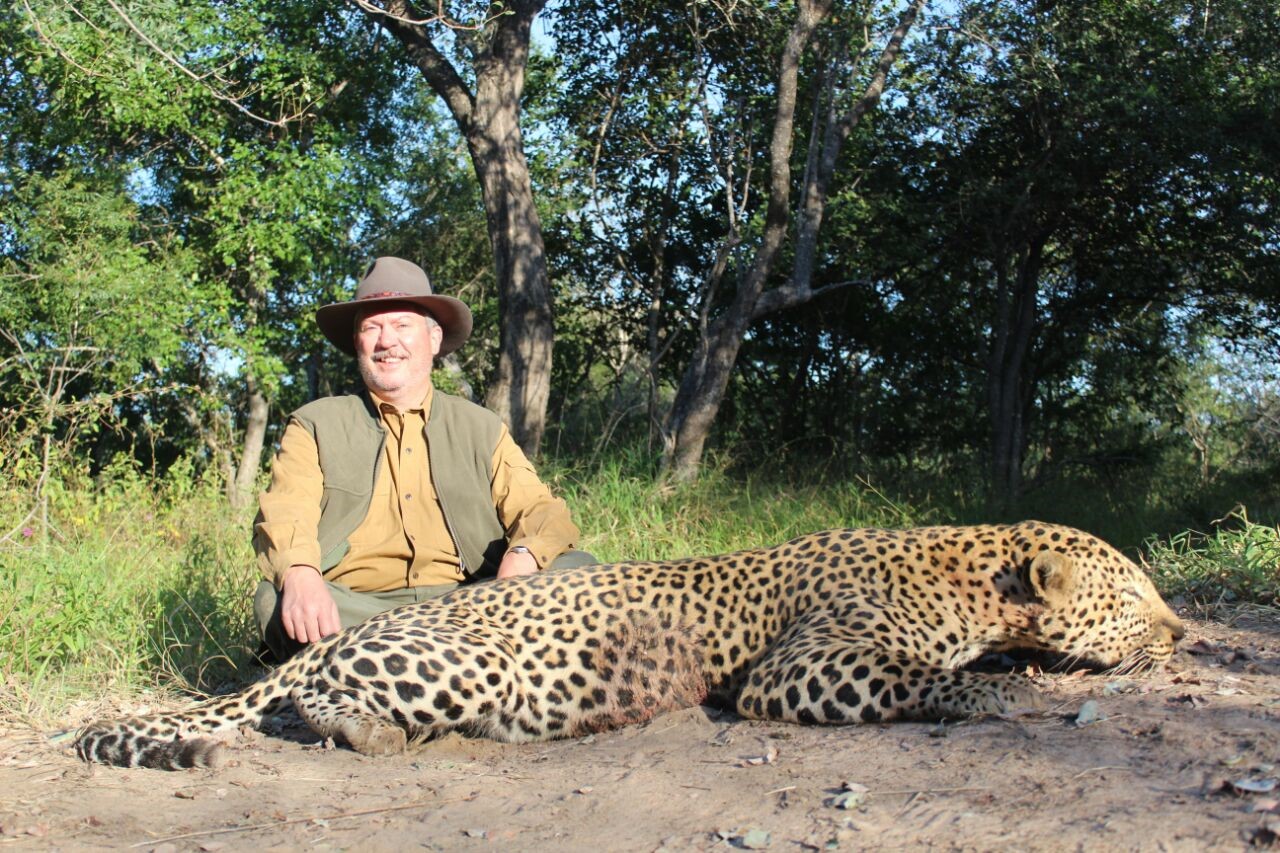 The safari was all I could ask for. Tracking the old warrior buffalo was exciting and the experience of checking and dragging baits for leopard was fascinating. I watched the video "Patience and Pressure: Hunting the African Leopard" several times before my trip and it is true. Leopard hunting requires extreme patience while baiting and especially when sitting in the blind over the bait. The pressure comes at the moment of truth. The cat is feeding - can you perform and make the shot? Craig Boddington says it is at once the easiest and most difficult shot you will ever make. It was an experience I will remember for the rest of my days.

P.S., I'll upload some more photos when I get a chance to sort through them. I've been slammed at work since I returned.
Last edited: May 31, 2017

Awesome Tom, well done. Nice buff too. You used a great calibre on the buff!

Thanks for sharing your story. Looks like you had a great time and certianly got a great buff and leopard!!
John 3:16

reedy0312 said:
Thanks for sharing your story. Looks like you had a great time and certianly got a great buff and leopard!!
Click to expand...

Thanks, Reedy. I was sorry to read that you did not get your cat. I went in prepared for that outcome, too, but the stars seemed to be aligned on this hunt. I also read Rookhawk's report. Sounds like he had a real rodeo!

Wow Doug, that was exciting for sure!! Congratulations! Sounds like the M70/.404 is working well. Shot mine, er uh, I mean Donna's just recently for first time. Looks to be a very accurate shooter with CEB's. But also a little light, need to add some weight to tame recoil a bit.

Thanks, Phil. Yes, I am really liking the 404. Mine weighs about 10 1/4 lbs scoped, which seems about perfect for the loads I am shooting. I am shooting 400 grain tsx at 2250 fps. Recoil is very manageable.

Congrats sir! That is a fine looking cat. Indeed your patience paid off...along with a few tricks. How far from the tree was the blind?
What bait were you using when you got him to feed?

Thanks, Charlie. The blind was 47 yards from the tree. They used donkey quarters in that area as plains game are hard to come by - principally because the bush is so thick. They buy old and sick donkeys from the local villagers. Felt a little sorry for the donkeys, but not enough to call off the hunt!

What a great adventure. Memories are one thing that never wear out. Enjoy.

Custom, thanks so much for the awesome report! Fine looking trophies! Interesting bit about the truck coming and going.
Congratulations!
Africa on my mind.

Custom said:
Thanks, Phil. Yes, I am really liking the 404. Mine weighs about 10 1/4 lbs scoped, which seems about perfect for the loads I am shooting. I am shooting 400 grain tsx at 2250 fps. Recoil is very manageable.
Click to expand...

Yep, that would be butter. Donna's is may be 8lbs or so even with scope, so a bit lively.

Congratulations on both animals. Love the trickery on that old leopard.

Congratulations, two fine animals! You were truly blessed to bag both on this hunt!
Cheers,
Cody
"Montana seems to be what a small boy would think Texas is like from hearing Texans" John Steinbeck

Great stuff sir! Awesome story with both the buff and the tom!

Two eclectic hunts in one!

Great looking animals. Congratulations on the hunt. I'm truly happy for you. Hope to hear more about it in Dallas.
And here I am, returning to Africa of many faces;.... the sloe-eyed temptress with flowers in her hair who stole my youth and my heart, and left me an old man with a kaleidoscope of conflicting memories of many dashed hopes and some fulfilled dreams. E. Echols

Congrats on the hard earned trophies! Great experiences and memories for a lifetime!

Excellent write up of a great hunt!

Wow, what a great hunt! Thank you for such a great and detailed description of the hunt, I felt like if I was there. Outstanding trophies. Congratulations sir!
You must log in or register to reply here.