ZIMBABWE: May 2017 Hunt With Mbalabala Safaris

We check the baits this morning and nothing has hit. IT now hits me that my pursuit of leopard is over, as we must leave for Victoria Falls because that where I fly out of. We get back to camp and pack up and leave by 9:15. We drop our Zim Parks scout off in West Nic and then head to Bulawayo and make it about 12:45. We get some lunch at Lin's house, then head out for the remaining 5 1/2 hours to his Zambezi camp. We head in the direction of Hwange, and there is some nice scenery along the way. I did see an elephant on the side of the road, which was exciting because this is my first elephant sighting in the wild! Another nice sunset.... 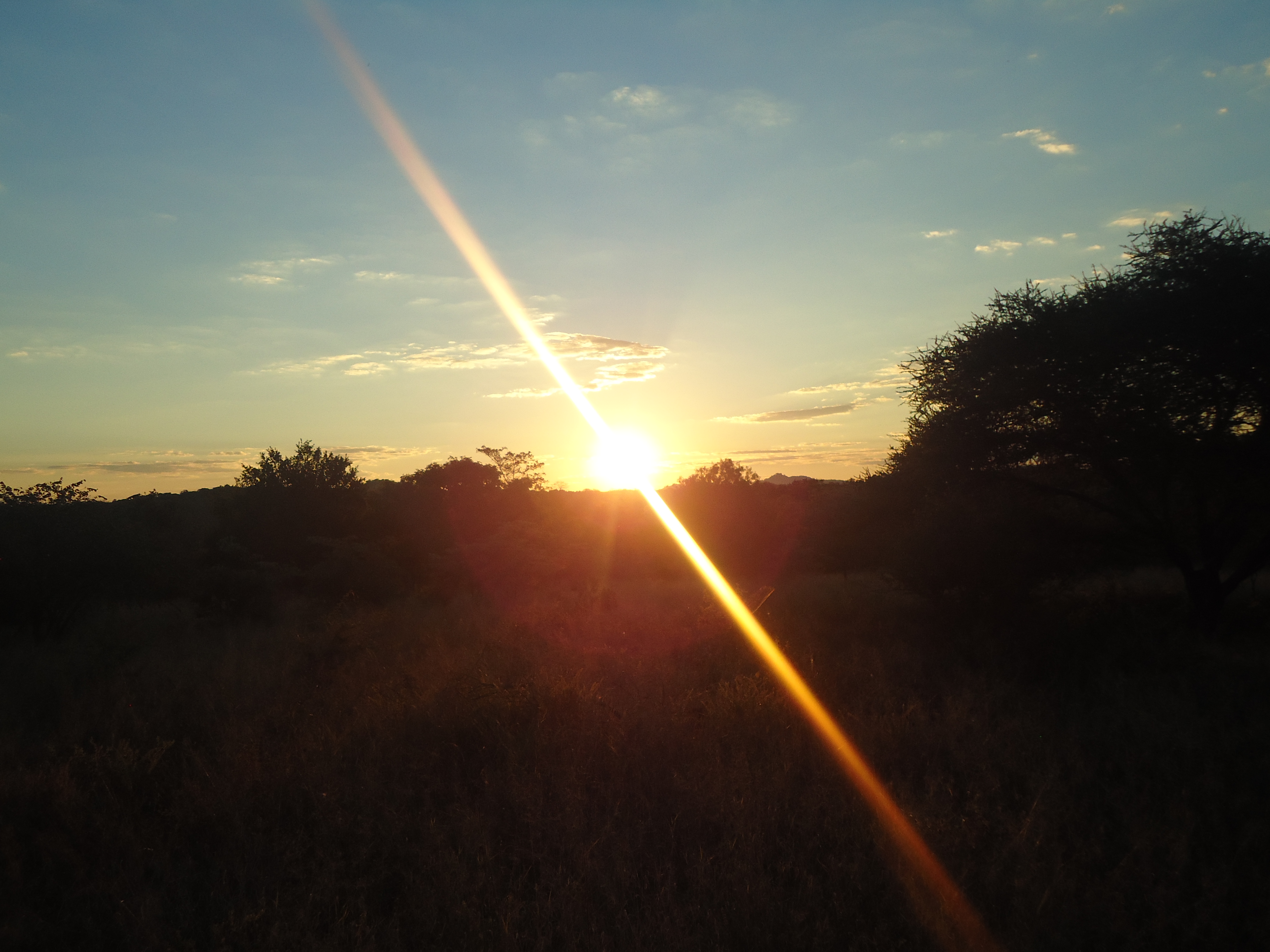 oh man, I am sorry! You certainly put in the time and effort!! Thanks for the great report. I was regularly checking in for the next installment. Bummer. But, fantastic Eland!
"When my friends tell me that I have led a remarkable life, I have to admit having done my best to make it so" - John Kingsley-Heath

Reedy, what a fantastic report/safari. When you posted the scenery pics of the hills and rocks, I truly thought you were about to post a picture of a TOM. You gave it your best.

Sorry you didn't get a Leopard. I've read it can be diificult sometimes.

@reedy0312 Congratulations on a great hunt. Excellent post. Sorry no leopard.... however, I have a feeling the story isn't over.

Thanks guys, yes we tried hard and Lin and his team put in max effort, it just wasn't in the cards this time around.
John 3:16

BWH said:
however, I have a feeling the story isn't over.
Click to expand...

Thats right Brad, a few more posts to make on this report!
John 3:16

We are now at Lin's camp on the Zambezi. What a setting and beautiful area this is. The camp looks over the river right at Zambia! The river was mving fast with all the rains they had the past few months. At night is sounded like you were at the beach or a waterfall..

Looking from the campfire and eating area over to Zambia.. 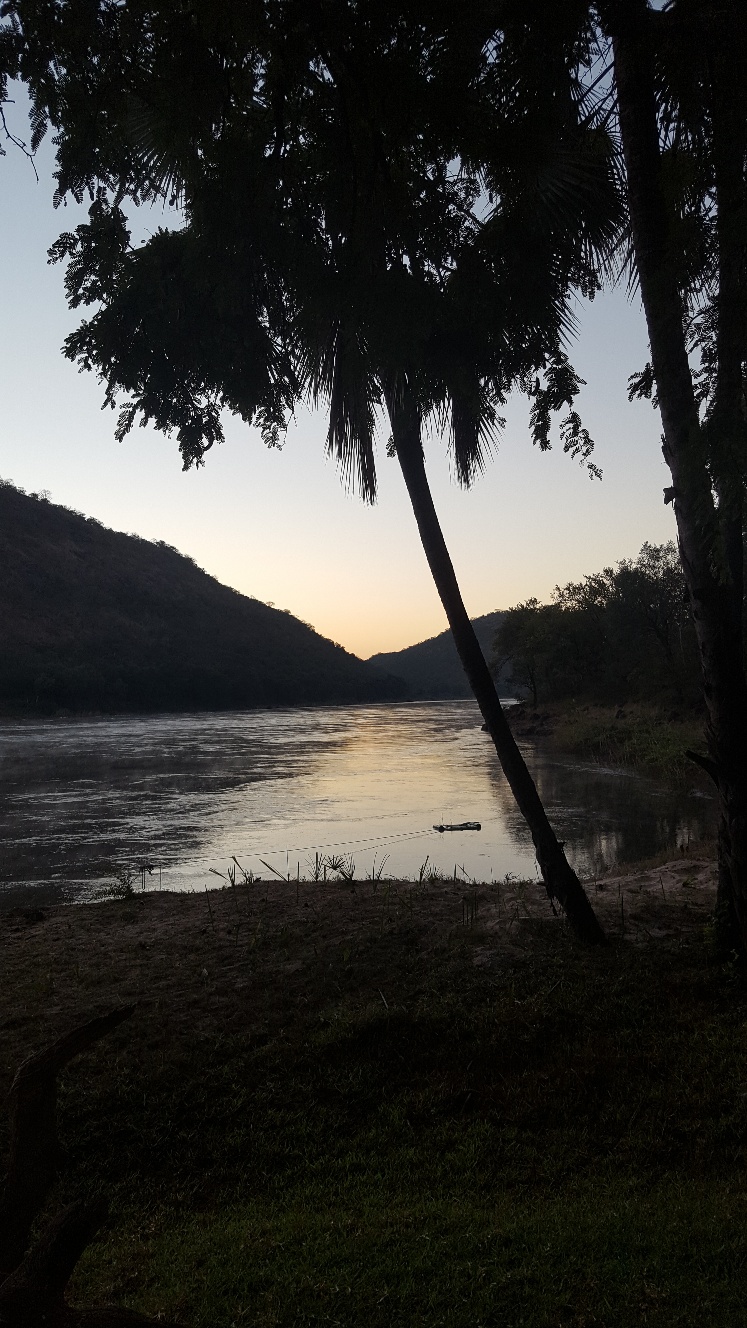 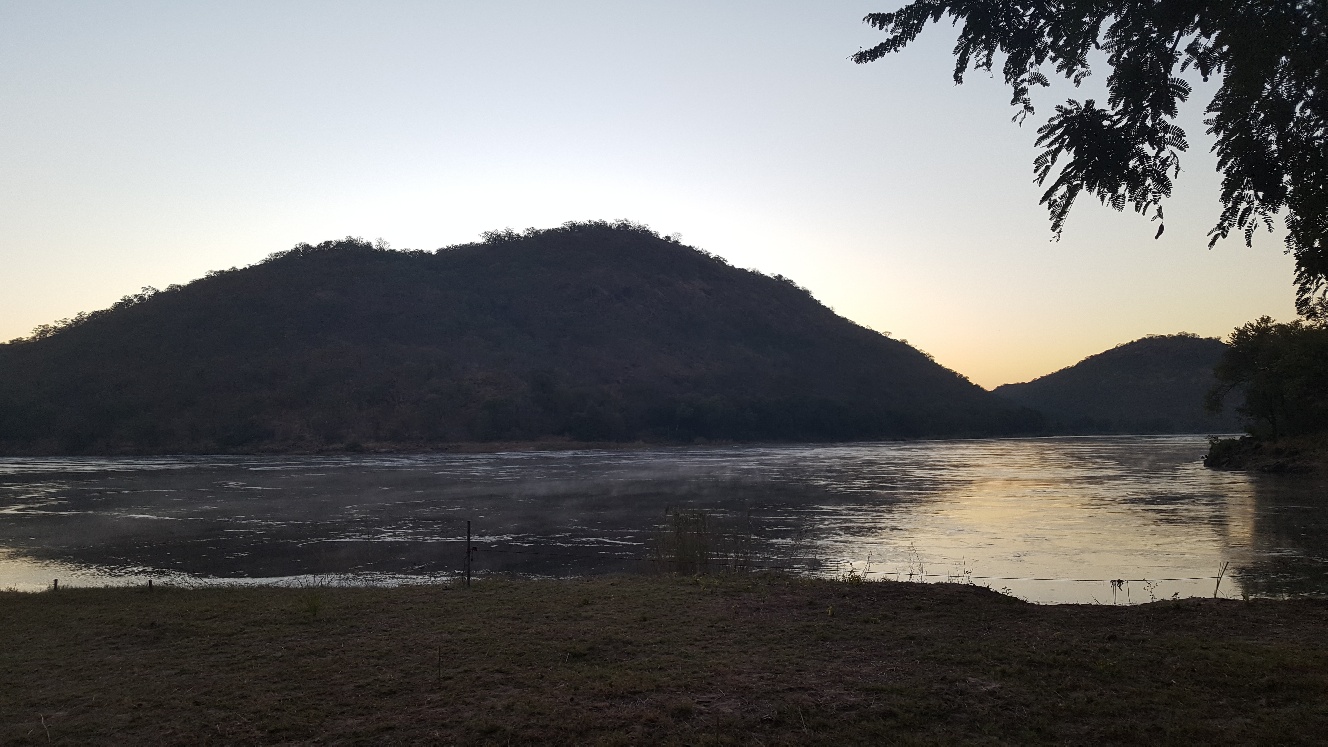 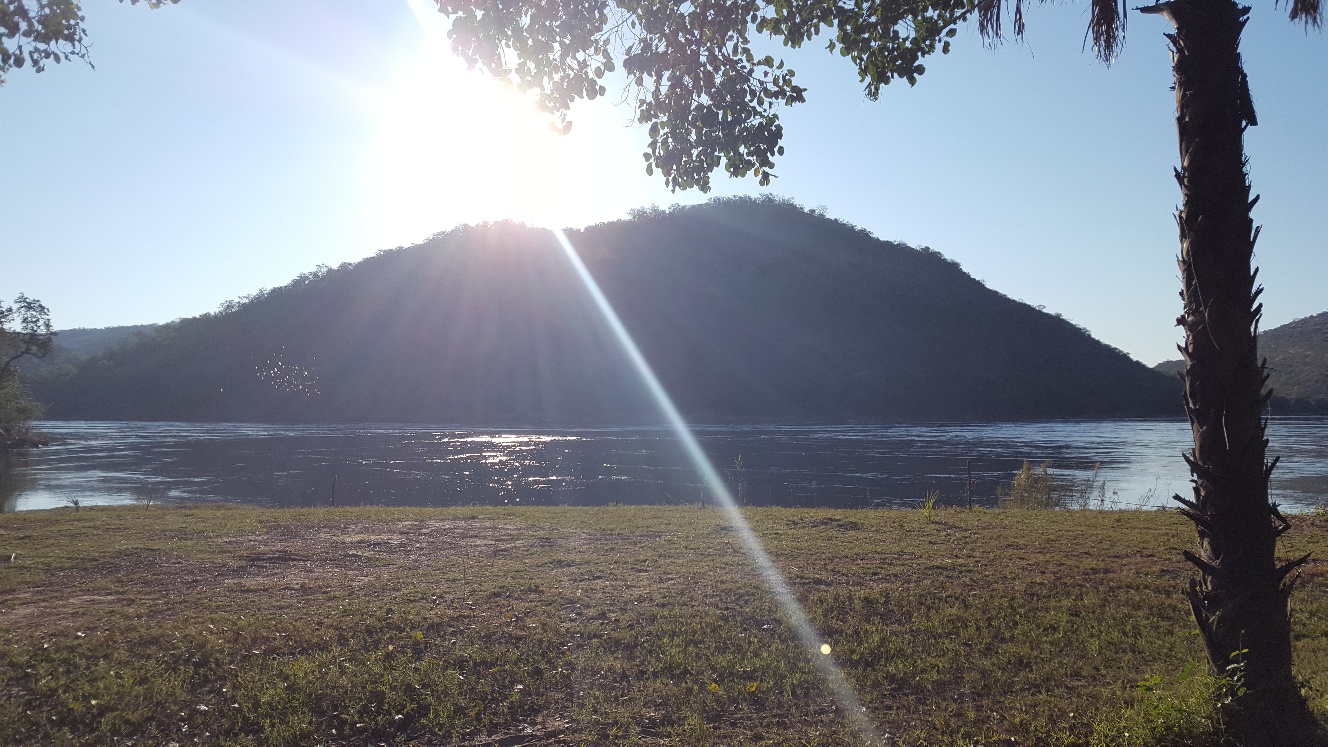 Great I am hooked, thanks for a great report.

With one full hunting day left I decided to after hippo as there were a fair amount in the area. We went to an offshoot of the Matetsi ans Zambezi rivers and found a pod of hippo. After about 30 minutes Lin identified a shooter bull in the pod.

The only pic I got you can make out a hippo. To hear these things surface and blow, and also below/grunt at us was amazing!!! 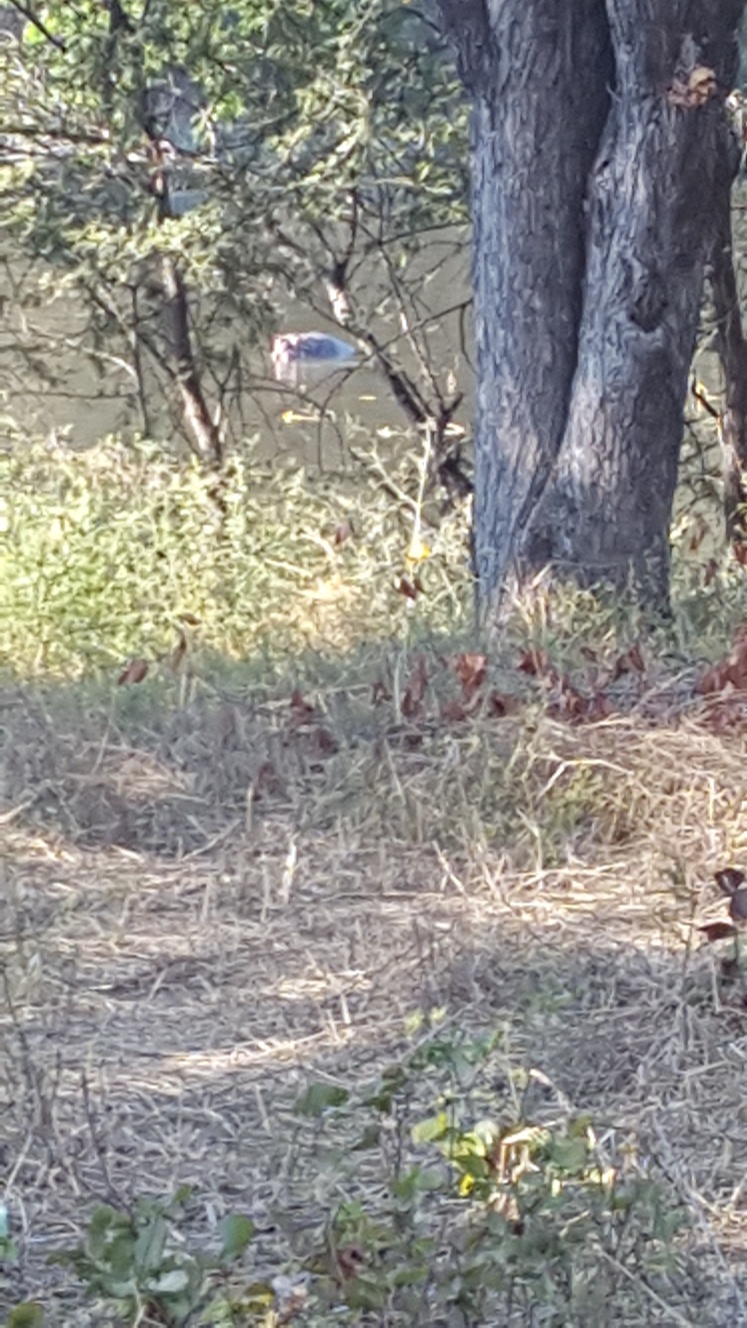 Great report and great trophies even if the leopard wasn't in the cards "this time". Thanks.

You joined the Leopard club.
Max effort does not guarantee a Leopard in Zim or anywhere for that matter.

At least it appears with this turn in the tale that you were provided an new DG option.

So about 9:00 we finally get into position and he presents us with a shot, probably about 60-75 yards out. Boom, splash... looks and sounded like a hit. We had it on video and went back to check and I hit what looks like at least a foot in front of him (low not to the right). Hmmm, I mean yeah I've missed lots of shot but didn't think I could miss that bad. Let me also mention about the black mamba encounter we had!! I am terrified of snakes, especially really bad ones like the black mamba. While we were sitting waiting for a shot, Lin spots something swimming through the reeds and coming towards us. He says its a mamba, I almost freeze from shock. Let me tell you, those things can swim FAST! I said if that comes this way I will have to get up and run. Luckily it went to the back to our right about 30 yards. Once on the bank we could tell he was a good 8 ft or longer!!!

Anyways, back to the hippo. We let them settle down and they stay in the area. About 1 hour later we go back and the bull is a little further in the inlet. We must go to the other bank, yeas the bank where the mamba went!!! Ok, I'm kinda worried but try to put it out of my mind. We get into position and the bull starts to grunt at us. We settle in for the shot, boom... splash.... Miss!! uuuggghhhhhh

Dejected, we head back to camp for lunch. After lunch we check the rifle and its 5 in low and about 2 inches left. Well, now I don't feel s bad!

While in camp the staff tells us there are some hippo downstream so we put a boat in to go investigate. 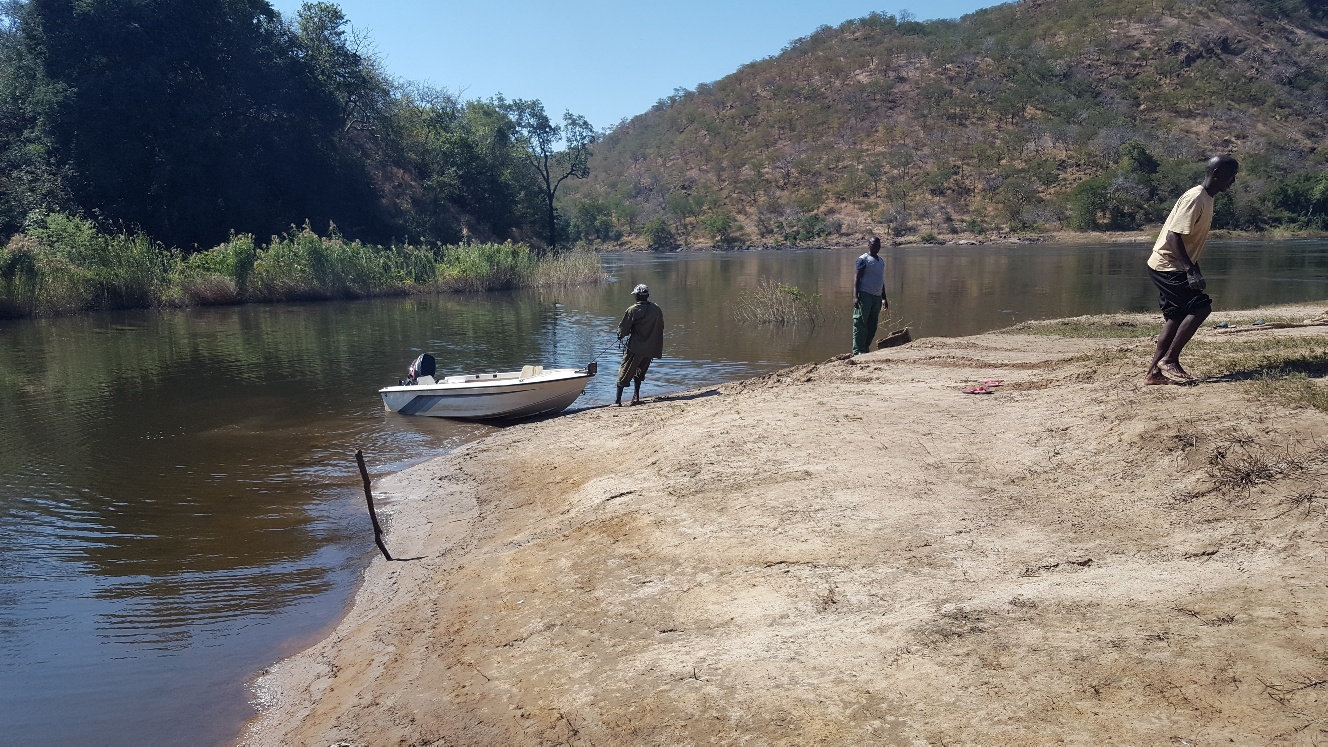 We ride down the raging Zambezi... side note its really cool that I'm on the Zambezi!

We find them on a little island in the center of the river, but with the tide there is no way to try for one. So we head back in. While heading back we spot a couple of huge crocs on the Zambia side. Lin estimates 14 footers. 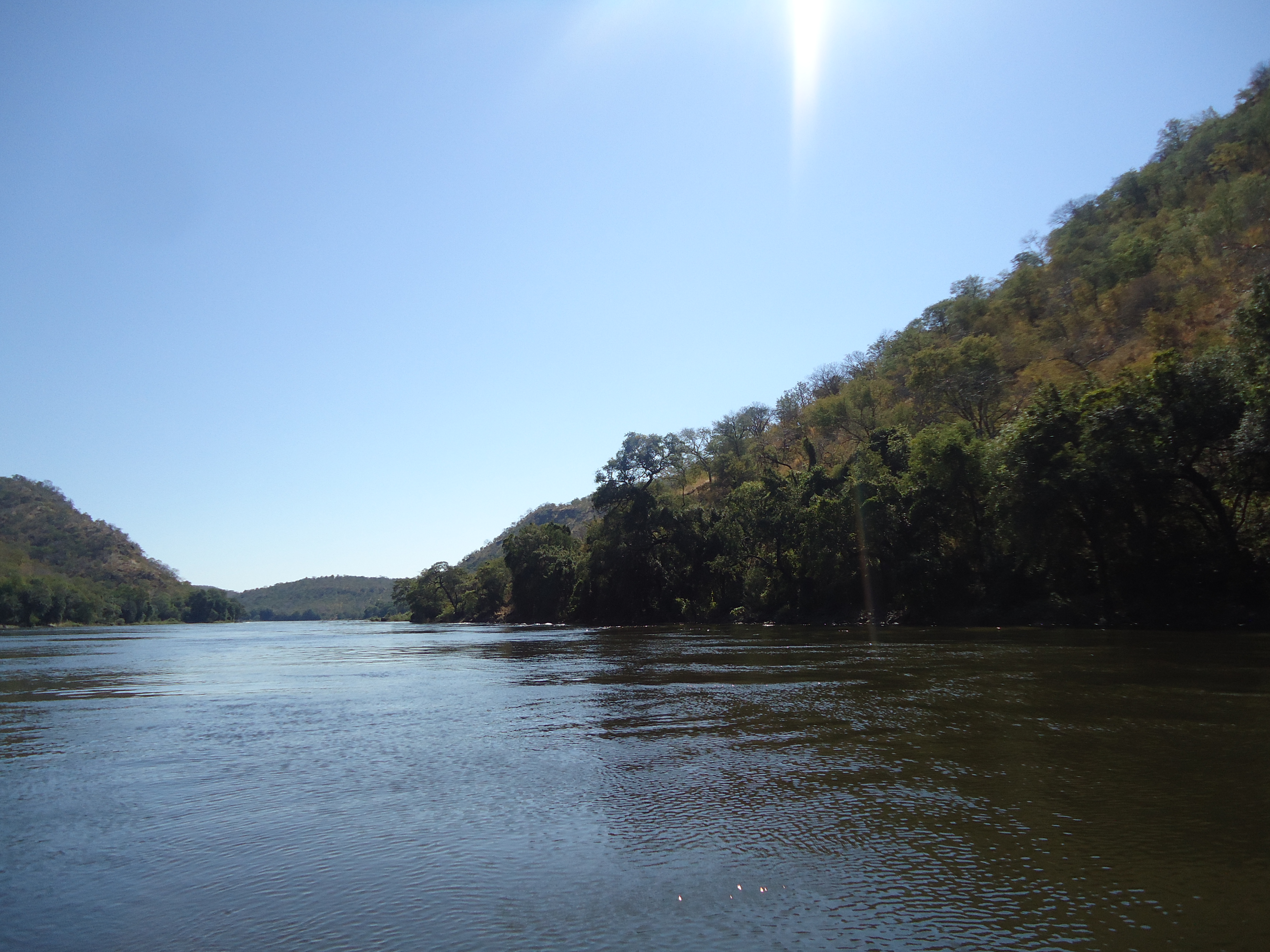 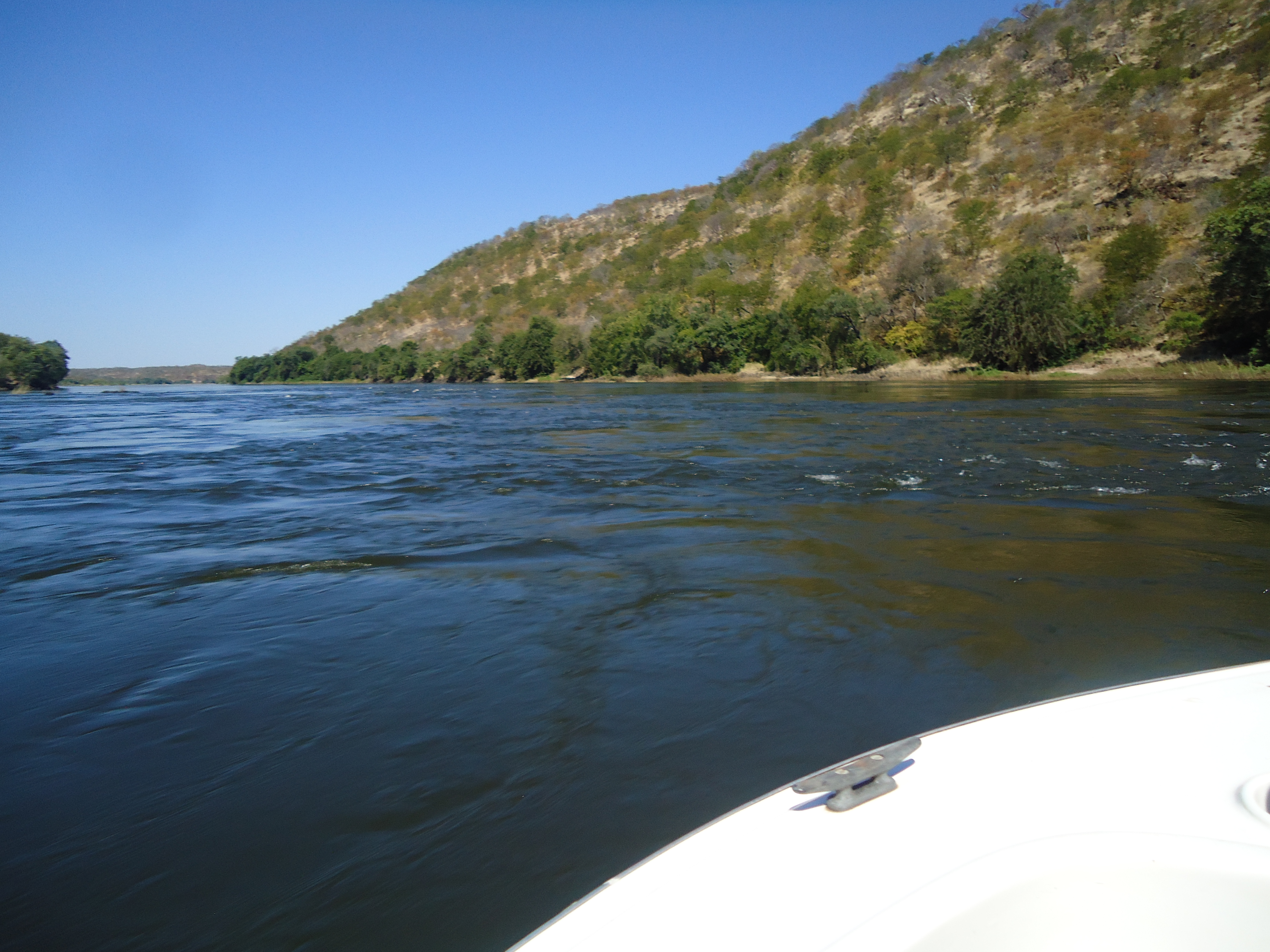 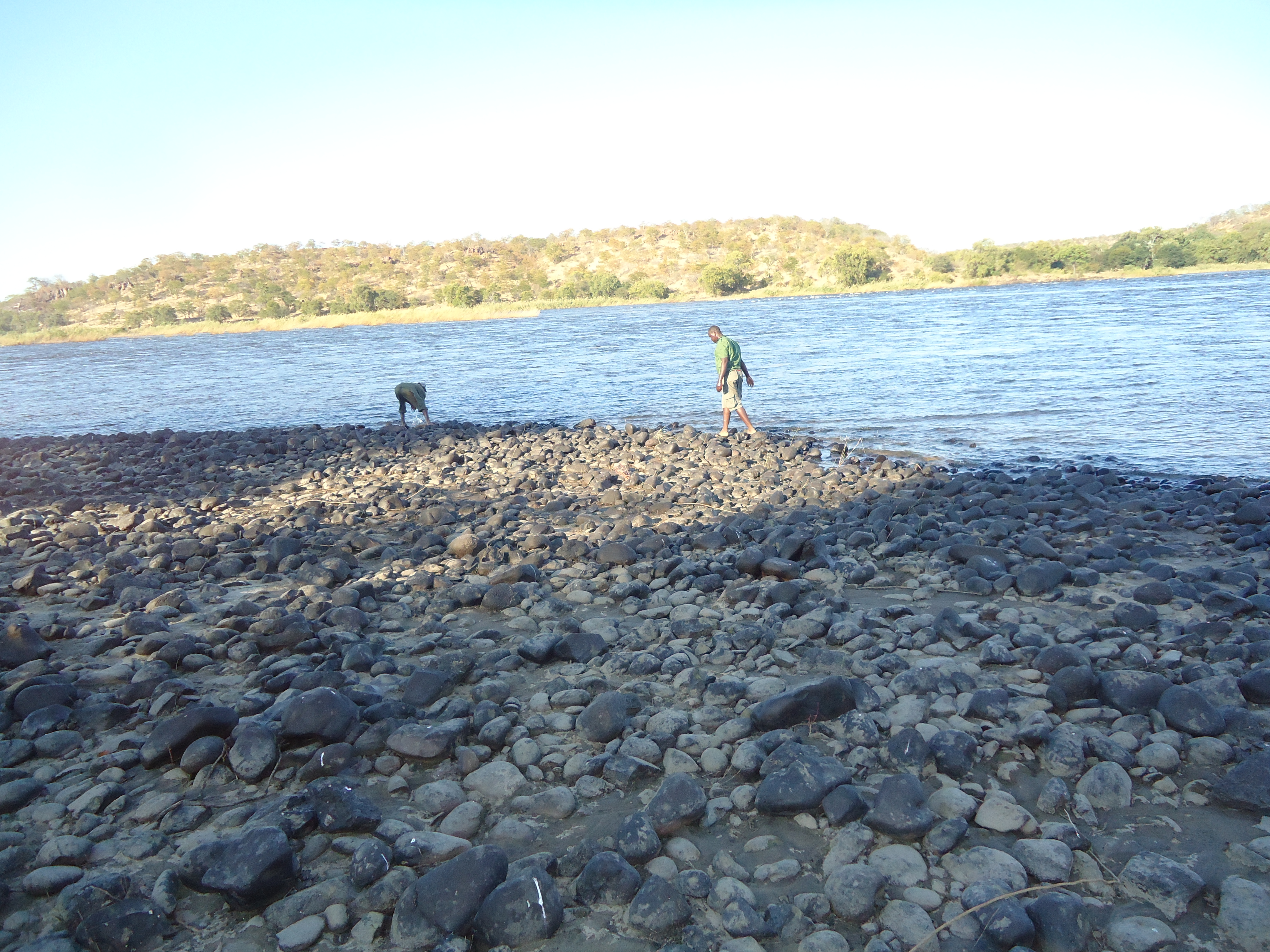 Sounds like a great hunt that you'll never forget.

So after we get back to shore we get in the truck and take the 30 minute drive to where we left the bull this morning. We get into position and wait for the shot. After about 30 minutes we get a shot and I squeeze. Boom, thud... ok that was a hit right. We all are pretty sure and wait a few minutes. Lin is glassing the hippo who are emerging (about 7 in total). A few minutes later he identifies the bull and says that him. What?? Your joking right?? That was a hit there is no way that's him! But it was him. How did I miss? Apparently it must have been just over his ear, skipped off the water and smacked the rocks or mud on the other side of the bank! Dangit!!!!!

He pops up again a few more times so I get another crack at him. Boom...thud.. Ok that was a hit right!! I think so...... a few minutes later Lin delivers the words I didn't want to hear. There he is still alive and kickin. You have got to be kidding me, at this point I'm beside myself and so dejected. Even though I probably only missed both shots by inches, it might as well have been miles. Bummed to say the least. Lin brightened the mood by saying "hippo 1, Charles 0" which I had to laugh at. At this point it was about 5 and time to head for camp as the bull had enough and we say him walking/swimming away.

Time for a beer!! I feel about an inch tall at this point. I am bummed about not connecting on the hippo but what are you going to do, it happens. It wasn't the first time and certainly wont be the last time.

Back to camp for a fire and beer! 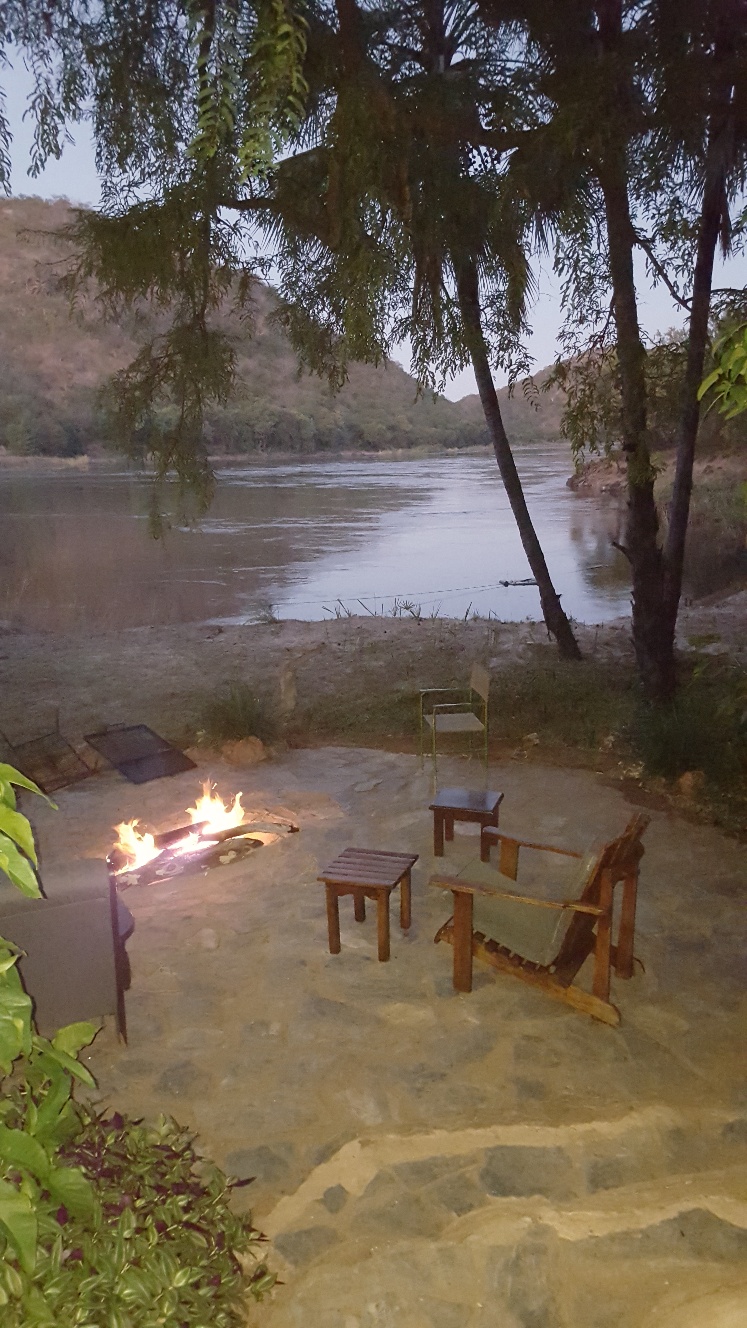 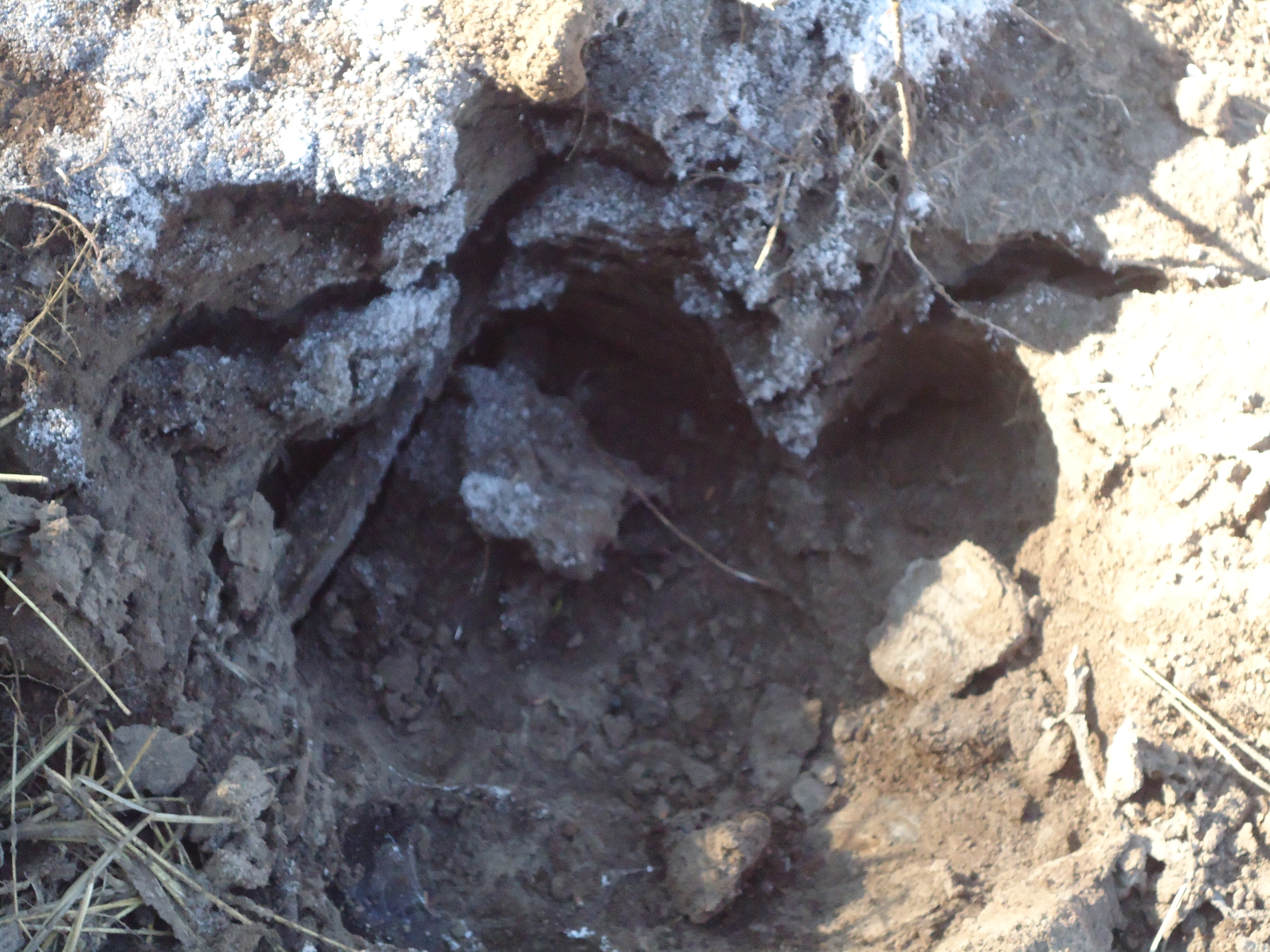 gizmo said:
Sounds like an awesome trip. Sorry about the leopard but sounds like it was a great hunt regardless. Congrats and you took some spectacular animals.
Click to expand...

Thanks man, it sure was a great hunt in a amazing place!
John 3:16
You must log in or register to reply here.

ZIMBABWE: Mbalabala Safaris Anyone Hunt With Them