What’s been one of the best-performing investments of the past seven years? Shares in Facebook? London property? Bitcoin? Up there with the best, believe it or not, are Zimbabwean 100 trillion dollar notes.

A trillion, by the way, is a million million. There are 12 zeros in a trillion. Add another two to reach the total on the Zimbabwean 100 trillion dollar bill, the note with the most zeroes of any legal tender in all recorded history. The bills circulated for a few months in 2009 at the zenith – or, more precisely, the nadir – of one of the most terrible instances of hyperinflation in history, before Harare finally abandoned the Zimbabwean dollar in favour of the South African rand, the US dollar and several other foreign currencies.

At one stage a hundred trillion dollar note would not even cover a bus fare. You needed a bale of notes just to buy a few household essentials. However, it’s thought that only a few million of them were ever printed.

I remember buying one on eBay. It is on the wall in my office. John Wolstencroft, a private investor, bought a batch of them to give away. “I always found they were a good conversation starter,” he says.

In 2010-11, Wolstencroft was living in New Zealand where he joined an investment club, made up mostly of locals and US expats. At the time, the great central banking experiment of quantitative easing and a 0% interest rate policy was making a lot of people nervous. He brought a handful of the Zimbabwean notes along to his first meeting to give out as a way of saying thank you for letting him join the club, but there were more people there than he was expecting.

“I didn’t have enough notes to go round,” he says. “People started offering me money for them. I tried to explain they were just a gift, but they just upped their offer. I realised then these notes were going to become a collector’s item.”

Wolstencroft went away and bought several hundred more notes. The price had already risen since his first purchase; they were £1.50 each. He gave some out to members of the club, as promised, and kept the rest. When he returned to Britain he gave some to a financial company he works with. “One of the independent financial advisers used to give the notes out to prospective clients to show why they should invest away from cash in a diverse range of assets, such as real estate, gold, stocks and shares,” he says. “Over the long term, cash loses its value.”

Wolstencroft wasn’t alone in seeing the potential of trillion dollar notes. The Wall Street Journal reported in 2011 that David Laties, owner of the Educational Coin Company in New York, had speculated about $150,000 (£104,000) importing the notes from Zimbabwe, sensing they would become “the best notes ever”. Frank Templeton, a retired Wall Street equities trader, bought “quintillions of Zimbabwe dollars” (that’s thousands of trillions) for between $1 and $2 each, via a broker from the Zimbabwe central bank. He would then sell them on for several times the price.

Vishal Wolstencroft, John’s 12-year-old son, noticed late last year that these same 100 trillion dollar notes were now changing hands on eBay for as much as £40 each. He talked his father into a joint venture. Vishal is responsible for the listing, photographs, posting, packing and advertising, while father John supplies the goods. Their profits are shared 50:50. Business is good. According to Vishal, it’s quite a step up from his previous venture selling old toys at a local market stall. Most 100 trillion dollar notes fetch close to £20-£25 on eBay, but set against the £1.50 paid by Wolstencroft in 2011 it is a striking return. In percentage terms, it is – close to 1,500%, compared with the miserable 5% rise in the FTSE 100 over the same period.

In an extraordinary irony, the 100 trillion dollar note – a symbol of financial mismanagement on a colossal scale – has turned into one of the best-performing asset classes of recent years.

The country’s central bank could not even afford the paper on which to print its worthless trillion-dollar notes. President Mugabe issued edicts to ban price rises, of comedic value were it not for the devastation that hyperinflation wrought upon the people. The miserably low savings and incomes of the impoverished population were wiped out; shopkeepers would frequently double prices between the morning and afternoon, leaving workers’ pay almost valueless by the end of the day.

In 2009 the government scrapped the currency, leaving US dollars and South African rand as the main notes and coins in circulation. To this day, Zimbabwe still has no currency of its own, although the government last year offered to swap old deposit accounts into US dollars, giving savers $5 for each 175 quadrillion (175,000,000,000,000,000) Zimbabwean dollars.

In an extraordinary irony, Zimbabwe now suffers among the world’s worst deflation, currently at -2.3%.
And here I am, returning to Africa of many faces;.... the sloe-eyed temptress with flowers in her hair who stole my youth and my heart, and left me an old man with a kaleidoscope of conflicting memories of many dashed hopes and some fulfilled dreams. E. Echols

It's an interesting story for sure! A sad state of affairs, I remember when Zimbabwe was at is best agriculturally and safari wise (great value for the price).

I saw one of these notes framed on the bar wall at my Kalahari lion hunt. I wasn't sure what it was until the farm owner told me the story. He told me it would take a bag full of them to buy bread.
A

The first bitcoins I bought in 2011 only cost $3, so this turned out to be my best investment ever. But personally I wouldn't recommend to invest everything in bitcoin only. There are more than 1000 different coins, altcoin seems a decent alternative to Bitcoin
Last edited by a moderator: Mar 27, 2019

@Wheels, that article is three years old. How much are they worth now?
"Every man dies. Not every man really lives". William Wallace
J

My internet search indicates approx. $120 each. I'm almost tempted to buy one , frame it and caption it "The results of socialism".
"To be ignorant of what occurred before you were born is to remain forever a child. For what is the value of human life, unless it is woven into the lives of our ancestors by the records of history?"
Cicero

Hogpatrol said:
@Wheels, that article is three years old. How much are they worth now?
Click to expand...

That's because I posted it three years ago.


Quick glance on ebay looks like they are $70-90 each. Now if I had bought 10,000 back in the day, I might be posting this from a hunting camp in the southern hemisphere.

Last edited by a moderator: Mar 27, 2019
And here I am, returning to Africa of many faces;.... the sloe-eyed temptress with flowers in her hair who stole my youth and my heart, and left me an old man with a kaleidoscope of conflicting memories of many dashed hopes and some fulfilled dreams. E. Echols

So does this make the Courteney shoes I paid $30 for in '96 worth a few hundred thousand now??
C

I bought a pair while living in Zimbabwe in 2001. They were a little too big so about two weeks later when I got back to town I tried to exchange them. The price had gone up about $30K Zim in that two weeks, and they wanted me to pay the difference along with the exchange. You just can't win!!

I know people that went long on the Dinar..... pretty sure them only people that made a dime were the money/exchange brokers.

When a currency gets soooo depressed, they typically scrap & start over.

In 2008 I gave all my Guides and Cook a million dollar bonus. Zimbabwe! 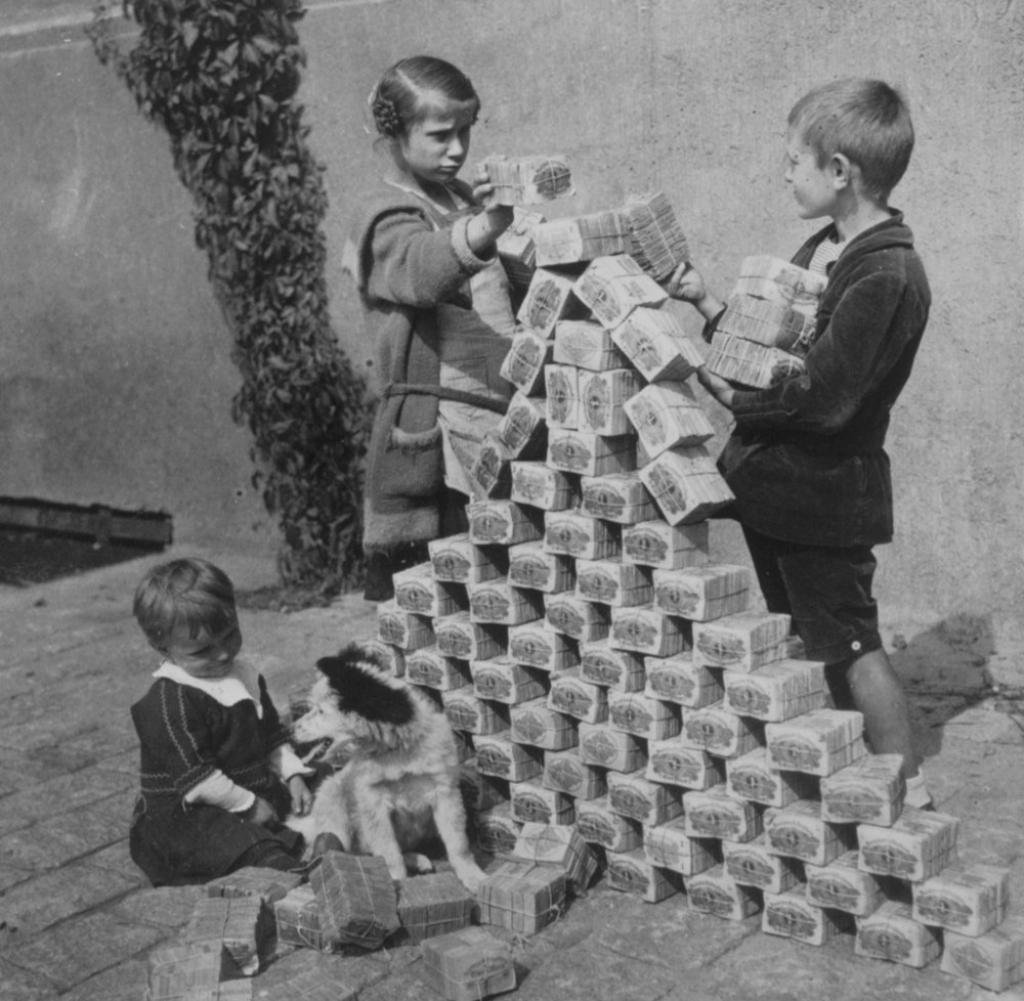 French Africa can count itself lucky ,that France is taking control with the "CAF" currency, otherwise they would no longer have their own money and the misery would be even greater.

We had that, too.
Many people have literally starved to death or died of debilitation in that times.
My grandmother told me, the women came to the factories with wheelbarrows to collect the wages of their husbands.
The EU and the USA print money like toilet paper.
I wonder when it will be 1923 for us.
Foxi

haha so what is the exchange rate at because google is claiming that the next 3 generations of my family will never have to work again and i make bill gates look like a pauper from one of these. ( I am pretty sure that is is not correct)
-"You don’t hunt turkeys because you want to; you hunt turkeys because you have to." —Tom Kelly
-“Look deep into nature, and then you will understand everything better.” — Albert Einstein
-"Accept the challenges so that you can feel the exhilaration of victory." George S. Patton

Foxi said:
View attachment 302609
French Africa can count itself lucky ,that France is taking control with the "CAF" currency, otherwise they would no longer have their own money and the misery would be even greater.

We had that, too.
Many people have literally starved to death or died of debilitation in that times.
My grandmother told me, the women came to the factories with wheelbarrows to collect the wages of their husbands.
The EU and the USA print money like toilet paper.
I wonder when it will be 1923 for us.
Foxi
Click to expand...

Fantastic photo. Never seen it before. Appreciate your posting it.
And here I am, returning to Africa of many faces;.... the sloe-eyed temptress with flowers in her hair who stole my youth and my heart, and left me an old man with a kaleidoscope of conflicting memories of many dashed hopes and some fulfilled dreams. E. Echols

Whatever happened to real money?

sestoppelman said:
Whatever happened to real money?
Click to expand...

It is currently about $1,540/ounce!
Captain of the Luddite Society
https://www.africahunting.com/threads/zimbabwe-hunting-the-bvc-in-zimbabwe-for-buffalo-john-sharp-safaris-exceeding-expectations.53046/

Shouldn't there be a hunt report out soon??
You must log in or register to reply here.

No End In Sight For Zimbabwe Cash Shortage