My Cape buffalo trophy from Zimbabwe is at home now .

I did not trust to write the story about this hunt,because english is a foreign language for me ,but now, over a year later, my english is always worst, but you dont look at the vocabulary and grammatic so much please.

In an german hunting newspaper I red an advertisment in January 2014 of a zimbabwean hunting conservancy near Hangwe National Park.

I made the contract clear and flew in the summertime via Joburg to Bulawayo with my trusty .375 H+H ,some Honady DGX and a few Fullmetall Jackets. Absolutely no problems by the officials because my gun.
When I was standing in the line of the connecting flight to Bulawayo, I thought I was on an interior flight in China.
99% Chinese people around me. Make your own thoughts, who is the winner in Africa…….

The owner of the hunting property was a business man, in a compound with serveral farms bordering to the Sikumi forest . A hunting banned area to the Hangwe NP.
The neighbour property, where "Cecil" was killed.

The lodge was comfortable and my PH a very nice guy.
Bevor he was a PH, he was 20 years Game Warden in the Park, responsible for elephant control and live catch for the other game. A perfect man for hunting. 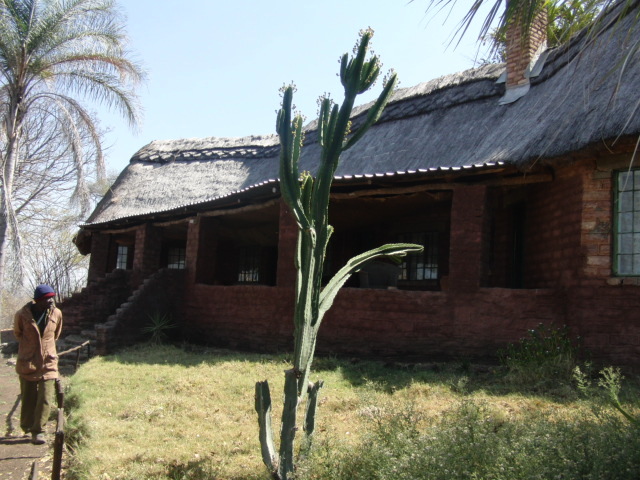 
It is a hard area for hunting there. Not so much game was to see. 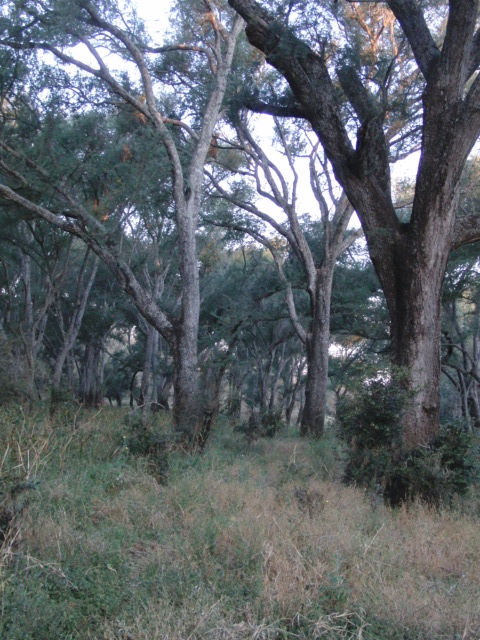 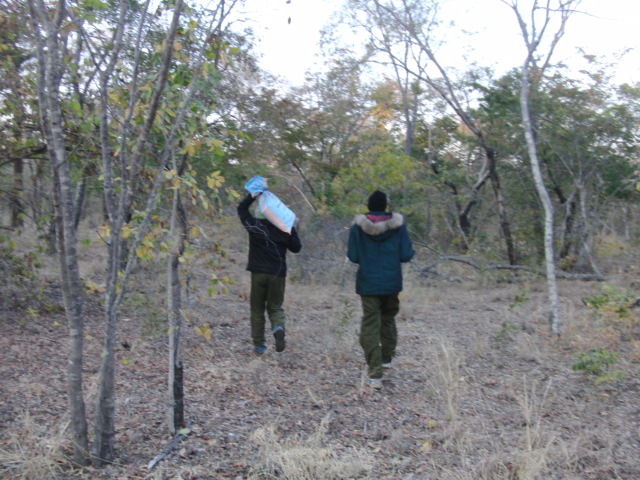 Here you see how salt was brought out.
Day for day we was searching for a fresh buffalo track and nothing was to find.

The motivation was not so high in these days, but suddenly they was there.

A big heard from round 4-500 heads, called the black train. 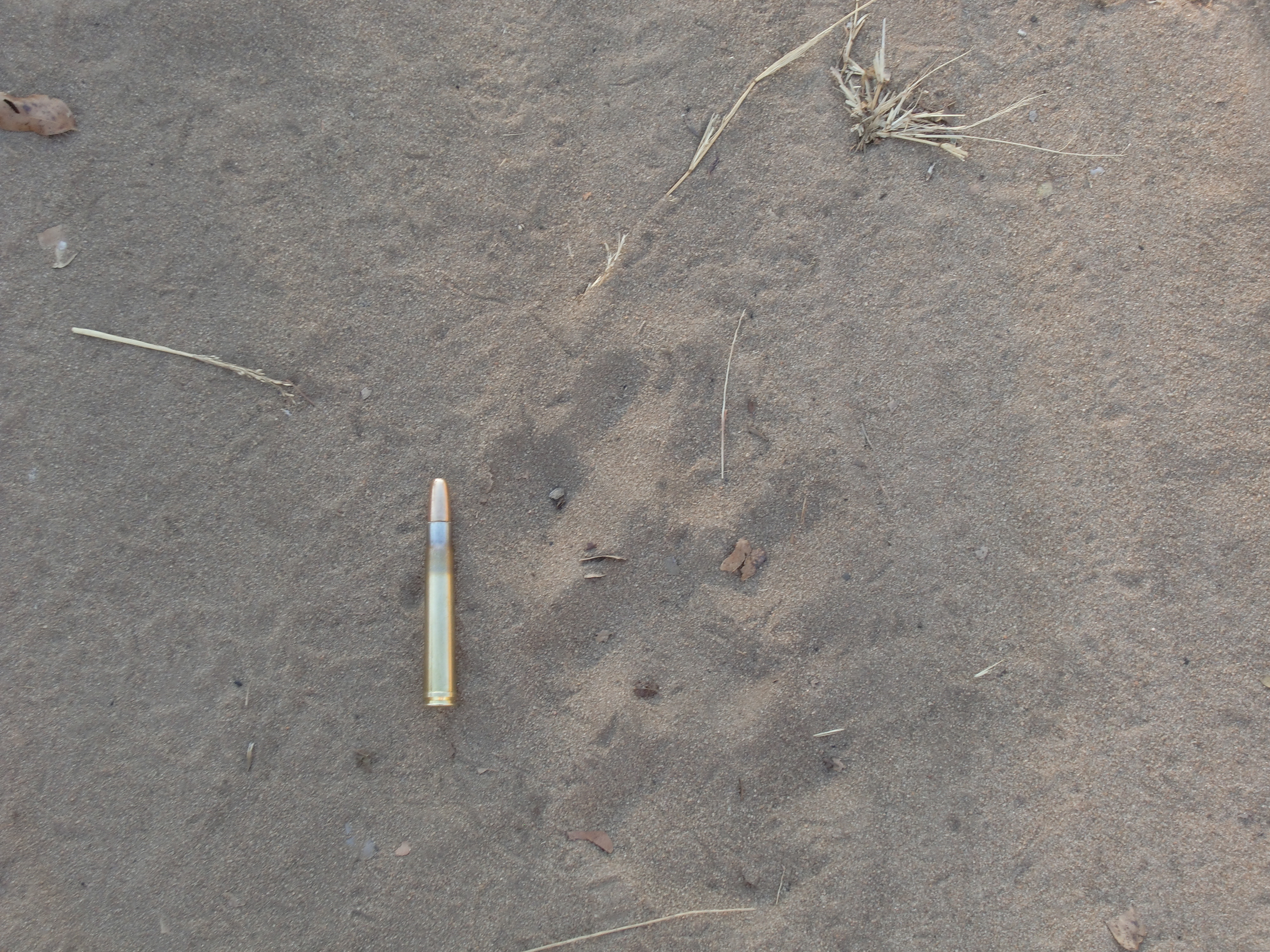 Roaming over several kilometers. Thirty here, fifty there, five there.
But here you can see, we was not the only hunter on buffalos -lion track.

On the day five or six we was stalking the whole day to the moving bunch, but no way to get an old bull. Sometimes we could near them 20 meters , but in the next moment he was on the other side, or not more to see.

On one day we observed a cow, which was caught in a swamp. She had a really hard fight to get out of this stuff. You could see she was angry, saw us and trotted to us. My hunter, carrying at this moment shooting stick, said, "get ready she is coming“ .

But I was just fascinated from this animal and so the PH jumped like a leopard to the trecker, took his gun and aimed to the cow.

On the distance no 20 meters, she turned away.The PH said “Foxi, don’t dream, it was just a split of miliseconds when she decide to charge us. Always be careful“.
At home we say “sometime you are standing beneth the line“.

And I stood beneth at this moment J.

We stalked the whole day, the buffs always was greesing and moving in front of us, and we had no chance to get on a good bull. 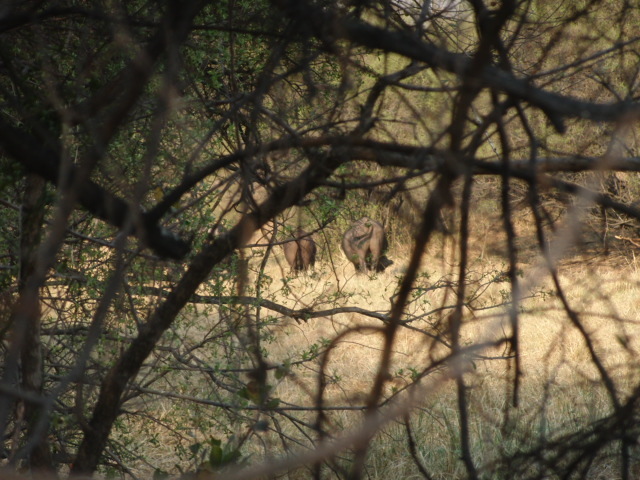 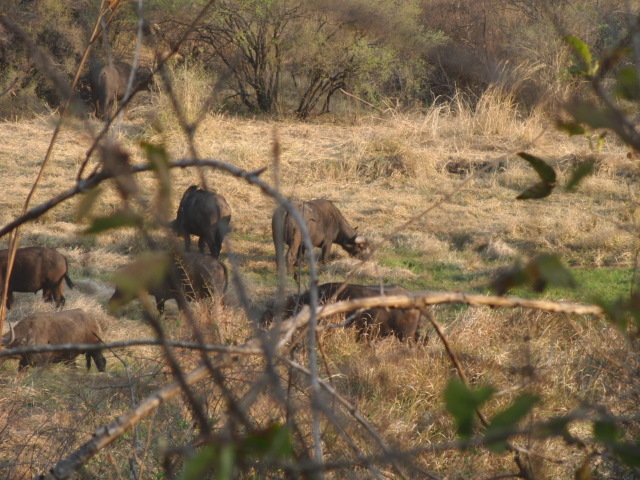 Tired we went to our car and after an hour the tracker said, look leopard 60 meters away.
I saw nothing, but carried my gun with much more attention as before.

The bush saw us before the dawn next morning and when the light was good we followed fresh tracks. In the thick bush it was very difficult to get near to the buffalos and when we arrived some buffs, the wind changed and the stage was empty. So it was the play over hours. 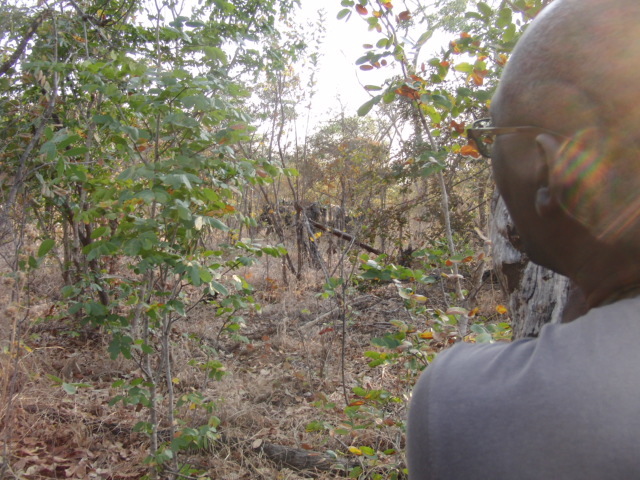 Here is a herd cantering to us. I had mixed feelings at that moment. 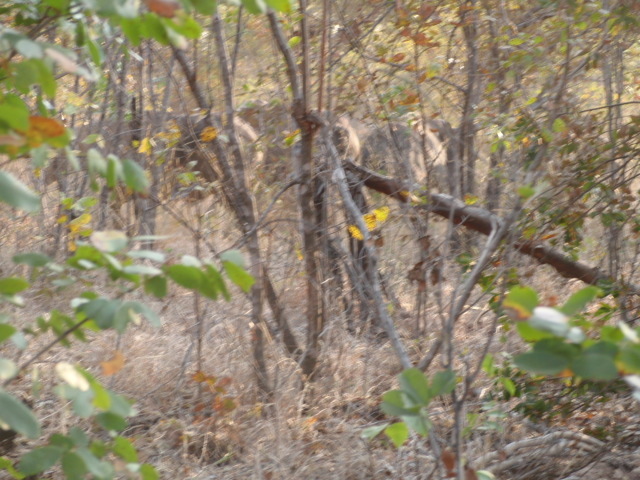 A word to the guns and calibers:

Zimbabwe so it seems to me, is a .375 H+H country and than, with a distance following is the .458 Win Mag.
And than nothing. You are getting other calibers only with difficulties there . Bred and butter by the local big game hunters is the .375 H+H
My PH shot over 500 elephants on control in Hangwe with old Brünner CZ iron in .375
Nearby I met an zambian big game hunter this week in Nürnberg at the IWA shot show, he is shooting since 40 years also only .375 H+H. From Duiker to elephants.
They say : this caliber has a perfect penetration .
Gwayi River is an elephant area, and sometimes some guests don't want to go with my hunter on elephant when they hear that he uses only a 375................
So he says now he is carrying a .458 and all is good. 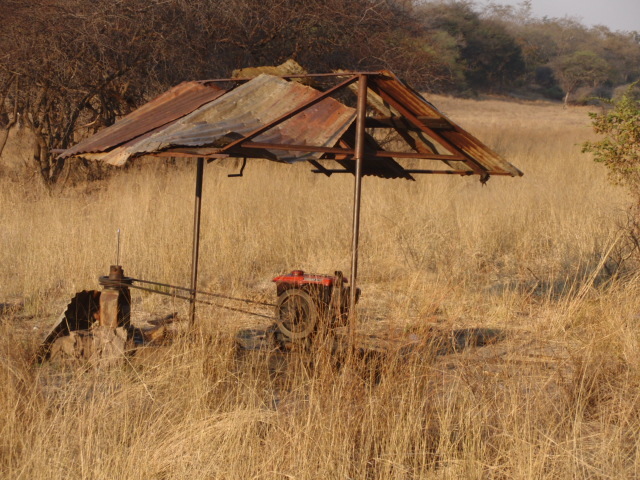 We had to take care, because the buffalos could move over the border, when we always followed them successless. Exactly at High noon, we held a war council what futher is to do, suddenly the tracker saw a movement.And really, on a distance at 70m a head from a big buffalo was to see.
I love to carry big variable scopes on my weapons, because when I have no time to judge a trophy I don’t use my binocular, I do it through the scope only.
The sun was shining on the buffalos head and I saw it was a perfect one .
My hunter guessed him as good also and at an age from ten years up.He hissed to me "get ready“.
Oh fellows, how I love these words and I guess, no drugs in the world world can give you a better feeling when you are aiming than to a buffalo.

No chance to get nearer, and we had to hurry before the wind changed.

But in this thick cover there was no gap for a save shot.
In my scope ( 3-12x56 Swarowski) I saw every fly on his skull and my Brünner CZ (a rough iron)
was laying total quiet on my three leg stick. My hunter wispererd change to a solid and hope the bull doesn‘t run away.
I took a a solid and aimed tot he buff. I think, a black PH is more risky than a white one,and he said ,shoot under the boss.
My hunter Hartley (RiP) in Zambia would never allowed me to do that shot on this distance.
But responcibility is mine and so I gave fire.
Not on the skull , but in the helse,I‘ve seen for a split of a second.

The quiet after the shot was uncanny.

We heard absolut nothing. No bird,no sound from my buff and no sound from the other ones.
And now, things happend what authors of african hunting literature lamants since 100 years:
My stuff want to immediatly to the place where the buffalo was standing.

So Gentelmen, the rest of the story is following, I promise.

Nice write up so far, Foxi! Keep it coming!

Look forward to the rest of the story! Thanks for sharing
John 3:16

Waiting to hear the rest.
Tommorow is promised to no one. Go live your dreams.

Great job Foxi, keep it coming. Your English is fine.
Y'all can go to hell, I'm going to Texas! Davy Crockett

I appreciate the effort. Your english is much better than my German.
Thank you for writing up your hunt report.
I am enjoying it immensely.

Ah Foxi I am loving your story. Thank you for sharing so far. I look forward to the " rest of the story".

Nice, but you have left us hanging when your almost done. Hurry up and finish PLEASE. Bruce

A good respectable hunt with a good ending and nice story to back you up.

Keep posting Foxi
Be Yourself Everyone Else Is Taken

Thank you guys for the good words,you make me hope
@ Jerome ,the Edit time with 30 minutes to correct words is much to less for me.
Is there a chance to get 3 days ? Three hours ??

Ok,here is part II of my story :

I told you that Gwayi River area is mostly an elephant country.
We hunted between Dete and Gwayi,looking to the Sikumi forest.
My PH and his boss, was over decades Park Ranger in Hange NP,former Wankie NP and before I forget, I will tell you what this experienced men ,
together over 800 elephants (only .375 H+H) on their list,said to me about

Elephant Controll or so called Culling :

to protect the habitat it is/was absolutly necesarry to kill complete groups of elephants.
These majestic animals, when they are to much are killing the whole greater Flora and make an habitat to a desert.
The culler,always three of them, was always working in a big V. 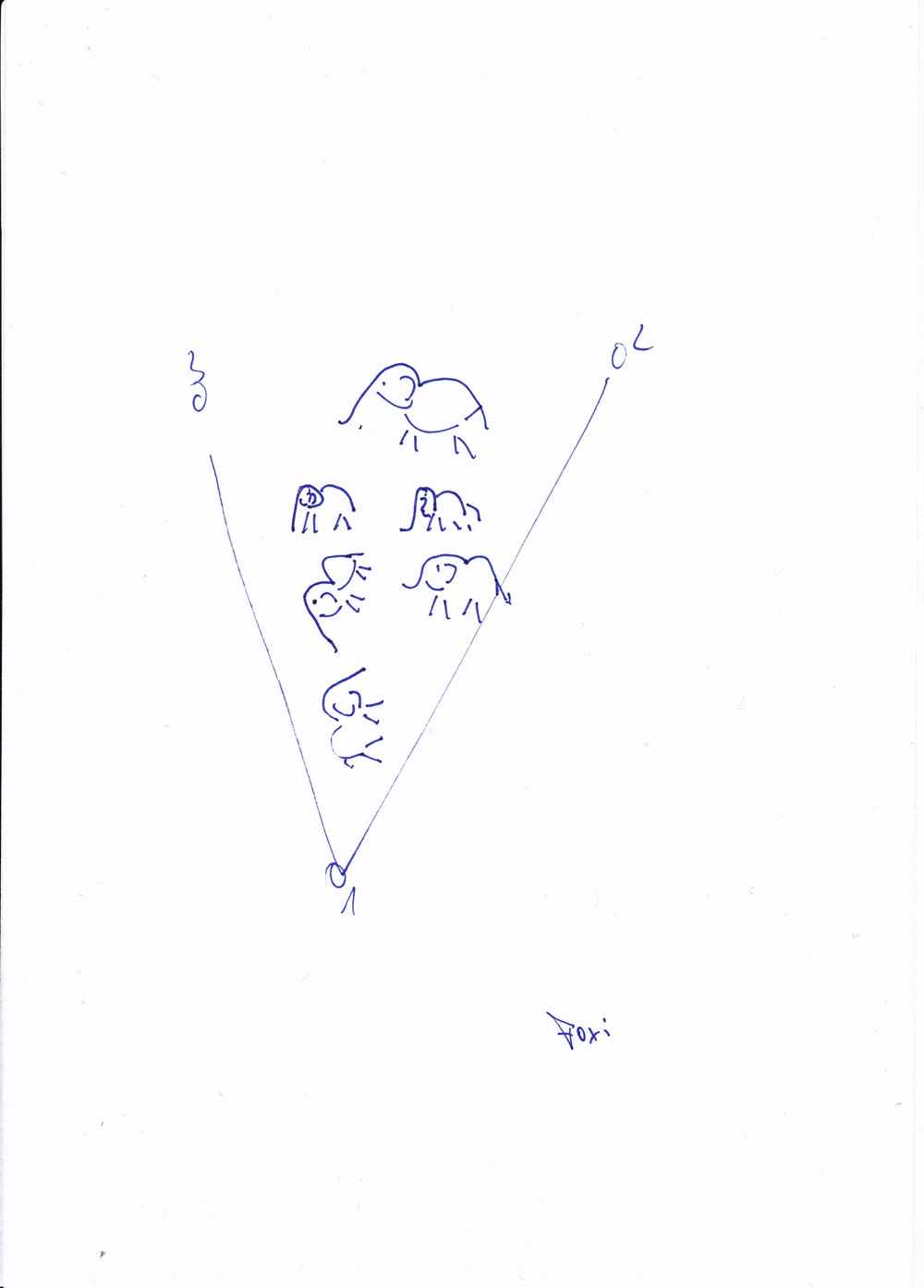 When you can take a look at my artful painting ,on the point of the V, there was the boss of the group ,only he had to decide which is the Matriarch.
The other shots,Nr. 2 and Nr. 3 was at the end,everyone on his side.Inside the V there was the herd.
Ideal 10-30 heads.
The first shot must kill the Matriach absolute,then all other elephants was running around there until all of the group was shot.
They took mostly .375 and .458 Win Mag.They had no other calibers.
Every culler had a loader,you have no time to load ,that must do the helper.
It is a terrible action ,when these wonderful animals were killed one for one.
They don't leave the leading cow until they are all dead.
It happened in maximum 20-30 minutes.
But when the culling boss made a mistake and shoot not the matriarch with his first fire ,than he produced a so called bombshell,the herd
sprays outside and they had to run for their lives.

Culling is a big, big operation.
Until 300 men was waiting behind the battlefield.
Skinner,butcher,packer,veterinarys,lorry and truck drivers,helper and, and, and, had to do their jobs now.
My PH swored to me, that almost no meat in all the years he has done that ,rotted in the bush.
On big culling operations-nothing.The logistic stood behind.

The world has been a small village now and elephant controll in that style has gone.
Imagine ,in the WWW comes a headline "National Park is killing his elephants"
No country survives this shitstorm.
Remember the elephant desaster in the 70ies at Tsavo/Kenia.
They let them starve.And now they accept that they can starve again.Hunger makes no noise.
The Parks in Zimbabwe needs every tourist and I hope you will visit Zimbabwe one day(again) .
It' s a nice country and times are changing . 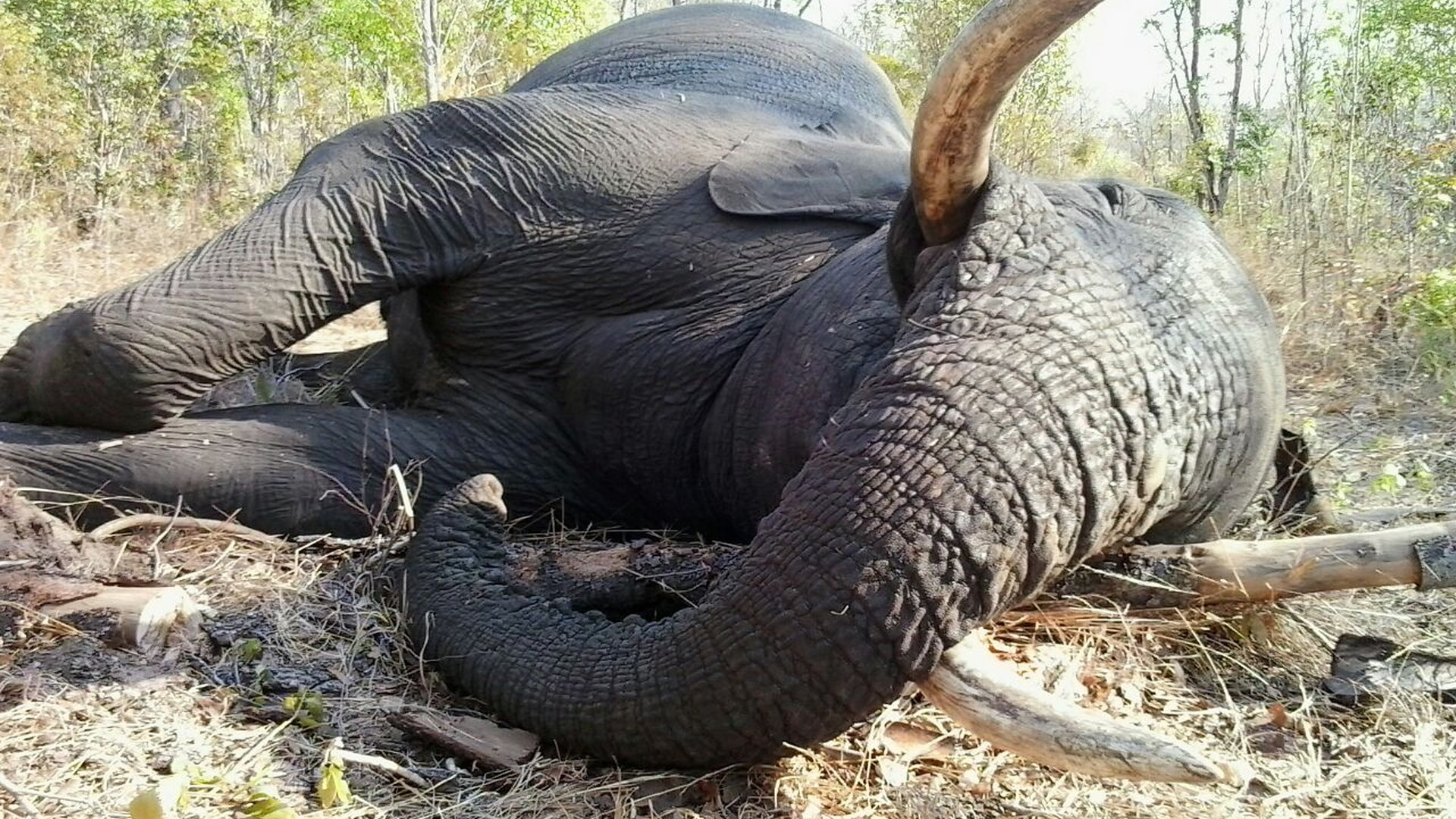 No gents , I haven't shot this bull.
My hunter sent it per Whats App.
A 60 pounder (almost) from Gwayi River.
An impressive picture of that prey.

Thank You for sharing your story! I look forward to reading the ending......

A great story sir! Thank you!


Foxi said:
They let them starve.And now they accept that they can starve again.Hunger makes no noise.
Click to expand...

This is a great statement as well as a very sad one....
HUNTERS make importation bans work!

Thanks for sharing
John 3:16

Having recently been to Zimbabwe and Hwange NP, I can say first hand that they have an Elephant problem and a big cull is needed. The damage they cause is great and only getting worse, but as Foxi says, it would be a PR nightmare!
You must log in or register to reply here.

ZIMBABWE: The Story Behind Chap's 45" Buffalo