Many here on this site already know what Victoria Falls has to offer, and I would like to share our experiences briefly for those who are not familiar with Victoria Falls.
My wife has never had any interest in Africa. At an SCI meeting, she overheard a gentleman by the name of Bill Calliciofi from New World Expedition (https://newworldexpeditions.com/) discuss Victoria Falls and she said she wanted to go. Bill offers the trip to fundraisers such as SCI chapters and other non-profits.

October 16, 2019. My wife, one daughter, sister in law and myself left Cincinnati for Atlanta and then connected to Johannesburg.

October 17, 2019, Arrived in Johannesburg and met the rest of the group for dinner. A good bunch of people and we were introduced to Melba pudding and Amarula at dinner.

That evening we went on a sunset cruise on the Zambezi. A beautiful cruise, especially at sunset. We saw hippos, crocodile, elephant, kudu, bushbuck, waterbuck and warthogs.

October 19th In the morning, we took a helicopter ride over the Victoria Falls. A great ride and the pilot flew so that each side of the helicopter would get the same views — a very nice flight, unlike military helos. The Zambia side of the river was dry this time of year. 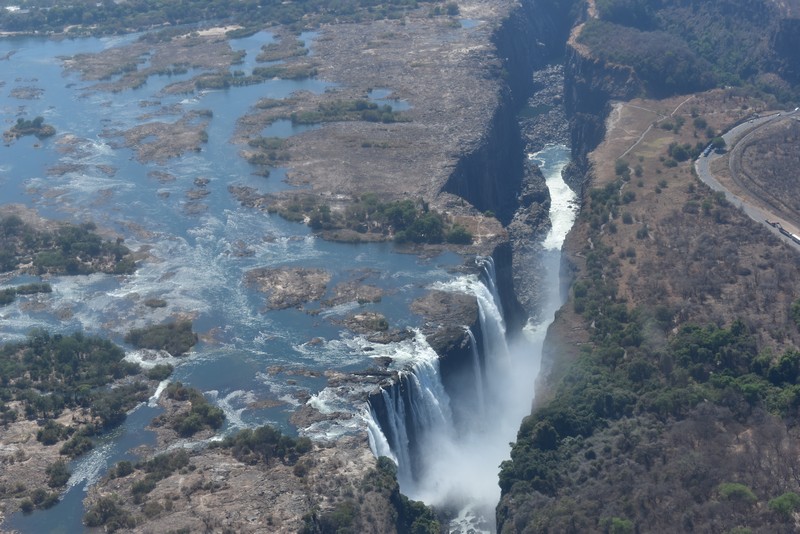 In the afternoon, we started with a 45-minute elephant ride, which was very informative followed by an opportunity to feed and interact with the elephants. When feeding the elephant its trunk was like a vacuum. From the elephant encounter, we went on a photo safari and saw elephants, rhino, zebras, and others. We had a large elephant bull about eight feet or less from our daughter and sister in law. They were frightened as I am telling them to take pictures

After dinner under the stars, we continued driving about with a rather large red lens light seeing impala and other antelope.

October 20th We attended a briefing and later walked underneath the bridge crossing the Zambezi. The bridge was manufactured, assembled, and parts number, disassembled, and shipped to Mozambique. The bridge was hauled in parts cross country and then resurrected there in Vic Falls. The engineers at that time stayed at the Victoria Falls Hotel. We later had “High Tea” which was very good and composed of little sandwiches, cookies (biscuits)… A very nice change of pace in a very nice colonial hotel. 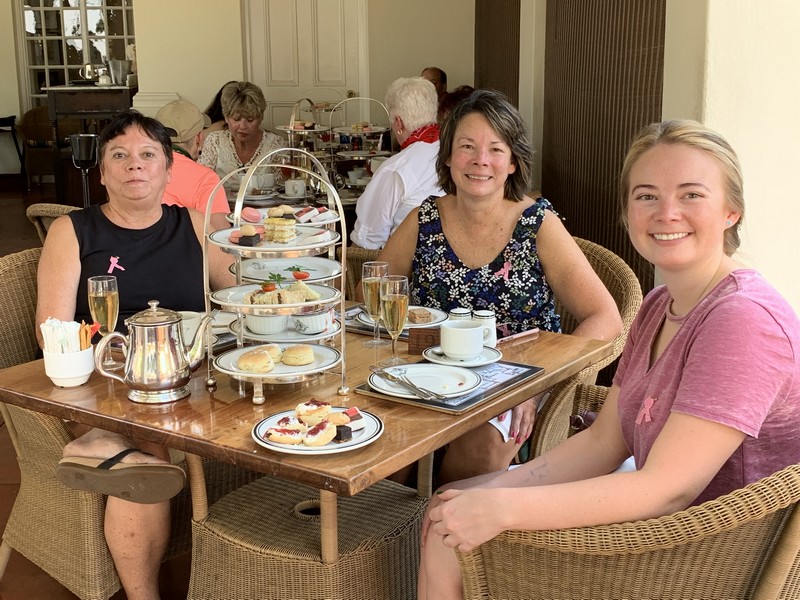 Oh, my daughter Carlene bungee jumped off the bridge. She was very happy. 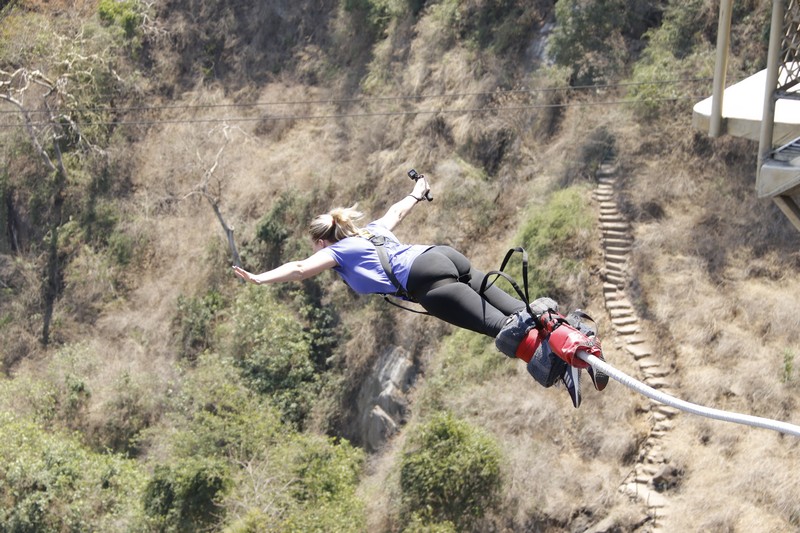 October 21st started as an easy day with a pleasant raft trip down the Zambezi for a couple of hours. It was very hot, so we were able to take a dip in the Zambezi. Along the way we say hippo, antelope, and a couple of crocodiles.

October 22, we visited the Devils Pool, which is a small pool on the lip of the Victoria Falls where one can overhang the edge of the falls and see down the 900’ to the river. From the Zambia side you take a boat to Livingstone island. You have to swim maybe 20- 30 yards to the rocks and climb up and jump into the pool. The guides stood on the edge and took pictures. I thought if this were in the US they would have a handicap accessible ramp, and the edge fenced off ruining the experience. They had wonderful breakfast afterward with the best tasting porridge we ever had. We all enjoyed the Devil’s Pool experience. 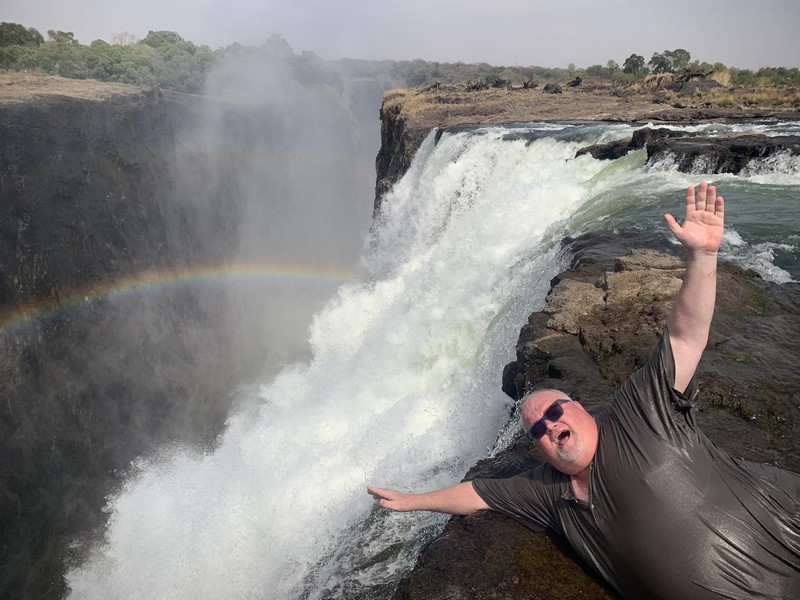 October 23. We visited the Chobe in Botswana. It was what you think of Africa. We saw 100’s upon hundreds of elephants, herds of cape buffalo, impala, and other antelope. We also say a couple of dead elephants. They are not sure why they are dying. One looked like it still had its ivory. We saw another elephant carcass that they burned because it died of anthrax.
We also saw a couple of lions. I did not care for the several vehicles crowding around the animals. It upset me when I saw two tour vehicles pull within six feet or less of the lions. I thought that was encroaching too much on lions space. I commented to our driver, who said they only did it to get by the other vehicles- yeah, right. 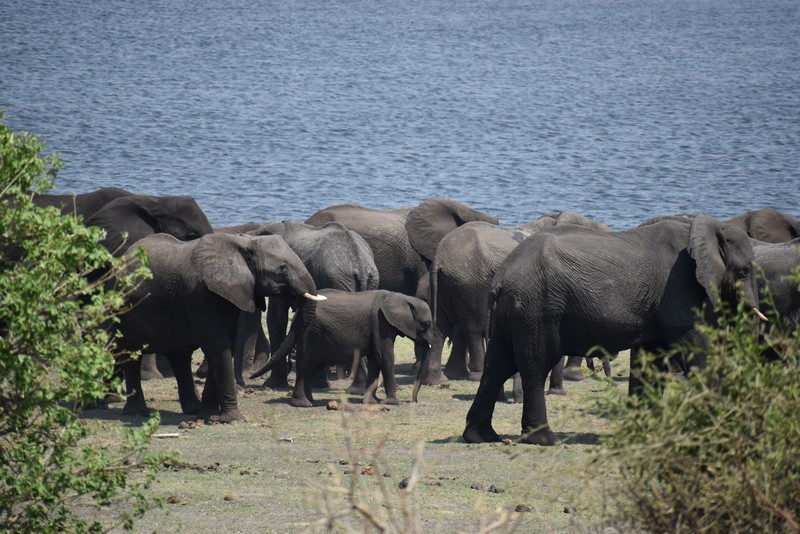 October 24. We had an opportunity to walk with lions, which were a highlight for my sister in law and was a neat experience. The center uses the walk to raise money for its operations. In short, they rescue lion cubs and raise them to the 18-24 months old. They then form prides and release them into a protected area with game for them to hunt themselves. The cubs offspring are relocated to the wild.
Great experience with very specific rules on what you can do and can’t do. Pet them from behind on the back. Do not pet them on the head or neck. Do not get on the ground with them, or if you drop something, do not try to pick it up. The lions were cats, they walked when they wanted to, and when they wanted to lie down, that is what they did. 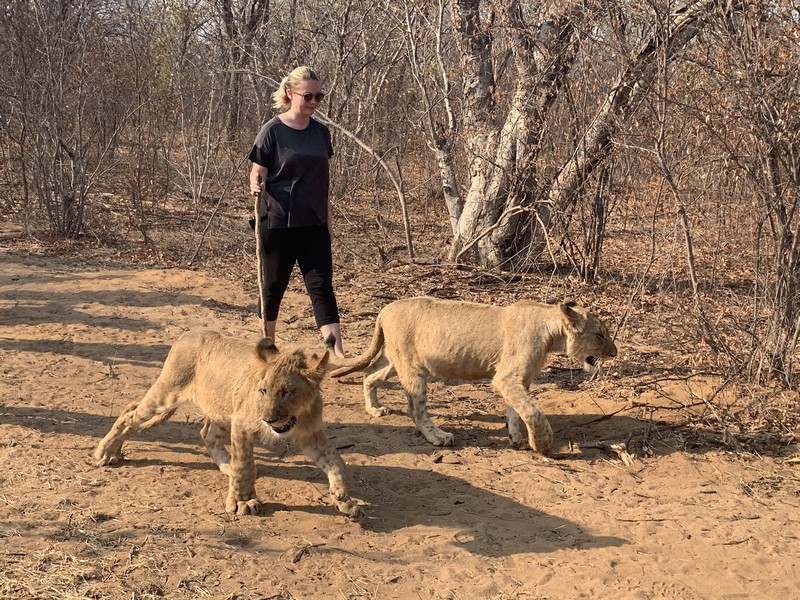 Even with the heat from 102 to 106 Fahrenheit, my family would agree that is the best vacation we ever went on. Victoria Falls was safe. The restaurants were pricy, but all had excellent food. We did some exotic meat such as giraffe, kudu, and warthog. Some restaurants were better at service and time than others.

This is one of our best holiday family trips. We will return and add a three day Chobe River cruise, redo the Devils’ Pool when there is more water, repeat the helo ride, and of course another high tea at the Victoria Falls Hotel.

October 25, we flew to Johannesburg where my family went on back to the states, and I flew to Port Elizabeth for a hunt.

Sorry to say, but this statement is bs:

The center uses the walk to raise money for its operations. In short, they rescue lion cubs and raise them to the 18-24 months old. They then form prides and release them into a protected area with game for them to hunt themselves. The cubs offspring are relocated to the wild.
Click to expand...

In over 15 years of operating they've never released any lions into the wild, they don't rescue cubs, they take them from their mother when they're less than a week old. They have formed 2 prides, which they have 'released' into 'reserves', which are really 1-2 hectares enclosures, so basically big cages. They call these 'release prides', these prides have been in their 1-2 hectare 'reserves' since 2012, plenty of time to breed and raise cubs (which has happened) and release grown up cubs (which hasn't happened). You can read about those 'release prides' here: http://lionalert.org/news-stories/1
There have been many lions though which were walked until 18-24 months old, where they end up, who knows. ALERT is good at attracting tourists, and feeding them a good story, but not a project I would ever support.
You must log in or register to reply here.