I’d only been back from my safari in Tanzania for about 90 days when I ran across a post from Andrew Baldry of Royal Kafue. It was mid-November and he stated there had been a last minute cancellation for a 7 day one buffalo hunt. I’ve no idea why but my crazy mind decided it was worth an inquiry (even though there was 0.1% chance of this happening). The fact that I had surprisingly been granted Thanksgiving week off played a major role in my curiosity about this hunt so I sent a message to Andrew. I didn’t hear back from him immediately therefore I figured the hunt had already been booked. No worries. Then I get a text two days later. The hunt is still open and Andrew gives me details and the cost. My adrenaline kicks in big time-BUT IT’S ONLY 11 DAYS UNTIL MY THANKSGIVING WEEK VACATION STARTS ! There’s too much to do in too little time -rifle permits, license, plane tickets, packing, etc etc - no way all this could work out in 11 days! I messaged Andrew the next day. He assured me that he could get the rifle permit, license, etc. I then got on the phone with TWG. Turns out that they can acquire a gun transit permit in 48 hours. This was unreal. It was if I dumped a puzzle out of a box and the pieces fit themselves together on the way to the floor. I was on the plane for a hour before I realized I was actually going on my second safari.

The flight over went pretty well. When I got to ADD I was paged and had to go to the bowels of the airport to unlock my gun case and show all my paperwork. I’d read one report of a shakedown at ADD and I said to myself “here we go, my turn”. My papers were scrutinized several times over but it was all perfect. I locked up my case and was escorted back upstairs to the main terminal. At this point I was fearful my rifle wouldn’t make the rest of the journey but it did. Andrew met me at customs in Lusaka when I arrived. He located my bags, got my rifle checked out with customs, and we were in the land cruiser pronto. Andrew was completely in charge and that was comforting. The six hour drive to camp wasn’t bad at all really. It was the start of the rainy season and the area close to camp had received about 2 inches of rain the night before I arrived. The road was literally a river. We drove through water for hundreds of yards at a time. I had come to the conclusion that I may get to hunt 4 out of 7 days with the looks of things.

Arriving into camp just before dark we drove along the Kafue River. The hippo’s heads bobbed like corks as we went by. The winged termites were erupting from the ground by the millions (Literally!) as the headlights shined on the road. We pulled up to the main hut/dining area and were met by a few of Andrew’s staff. I was shown my hut and bags carried in. Every bug was trying to find a dry place due to the rains and my hut seemed to be the driest place in Zambia. It was an entomologist’s dream in there ! Oh well no worries, I was in their world and I accepted that graciously. Andrew and I had a drink and dinner and I got things ready to head out the next morning.

I didn’t spring up out of the bed an hour before daybreak understandably but I got up just in time to watch a magnificent Zambian sunrise. Breakfast was whatever I wanted but Mango juice and toast with honey is all I ask for in the mornings. Andrew has an old land cruiser for a hunting car - no windshield, no doors, a tall bench seat in the bed, and COIL SPRINGS ! I’ve never appreciated coil springs until I rode over thousands of yards of ele foot depressions !
Micheal (the tracker) and Rachel (the Zambian game scout) rode on the high bench. Andrew drove and I was in the passenger seat. Usually there is a driver and the PH, client, and tracker ride on the high bench but Andrew likes to drive incase ele are encountered. We went to a grassy area where buff had been seen recently and immediately picked up fresh tracks. The buffalo had milled around a good while there and it took Michael a bit to sort it out but soon enough we were following them. It was cloudy that morning but no threat of rain. We followed the tracks for about 1/2 mile in the open then it got pretty thick - and we were close. The breeze would swirl a bit and we could smell them. That’s when it gets really exciting. Micheal suddenly points. We can see two bulls 70 ahead. We work the wind and the cover to approach slowly. We can see a few more black shapes. We don’t know how many in total yet but we are full scan. There’s a hole in the bush and a really good bull is standing there, quartering away at 60 yards. Andrew and I glass him and agree he is a shooter even though we’ve not looked at all of them. Micheal puts the sticks up and I settle the double in the V. The bull starts to walk - no shot but no worries since they have no clue we’re there. Cover is getting patchy but still ok. About 15 minutes of slow motion stalking we can see all of them. There are eight bulls and they are starting to bed down. Five of them look to be shooters but one looks exceptional and he’s behind another bull and a few trees. The leader of the group is far left and is the one I almost settled to bead on earlier. He has a softball size chunk missing out of his boss but is a great bull about 40” wide. I could’ve shot him a dozen times as he was wide open and the last one to lay down. There was one that had humongous bosses probably taping 16-18” but he was only about 35-36” wide. I was waiting on the big one behind the trees. We butt crawled closer until the cover ran out and we could go no further, 50 yards was plenty close enough. We waited. Thirty minutes later they started to get up. The lead bull was up first, he scrapped his horns on a tree with authority. The big one got up next and was quartering towards us but still behind trees and partly behind the lead bull. Andrew eased the sticks up in position and told me to get on them. As I stood up slowly the lead bull spotted me and spun around, stopping in a position that completely obscured the target bull. What kind of luck was this ?! Now the group was nervous and just like that they bolted off. An exciting and pretty intense morning had come to a close. I wasn’t disappointed at all. We decided to wait an hour and follow up, which we did but they were still on high alert so we agreed to leave them for the day.

On drive along the river back to camp we spotted a bushbuck ram creeping through the underbrush 100 yards away. But Andrew has already spotted a good Puku ram and he was in a much better place for a stalk. We stopped and Andrew insisted that I carry his scoped 375 but I declined. We picked our way through the patchy underbrush and spotted the ram. Micheal put the sticks up quickly but the ram saw us and hurried off. Making up distance quickly we got in the thick stuff and spotted him ahead about 50 yards. Sticks went up and I got right real fast. He had turned and was watching us, quartering towards me. I sent the right barrel, catching him behind the shoulder, exiting through the left hind quarter, and he spun and ran. We sprinted ahead. Fifty yards later we watched him as he spun in circles and dropped to the ground 35 yards away. I sent the left barrel into his neck (the only shot I had in that thick underbrush). A beautiful Puku ram that Andrew said was the first with a double rifle there. We had fresh tenderloin for dinner that night. Delicious!! The scotch by the campfire that evening was a wonderful ending to a great first day.
....day 2 coming soon .. 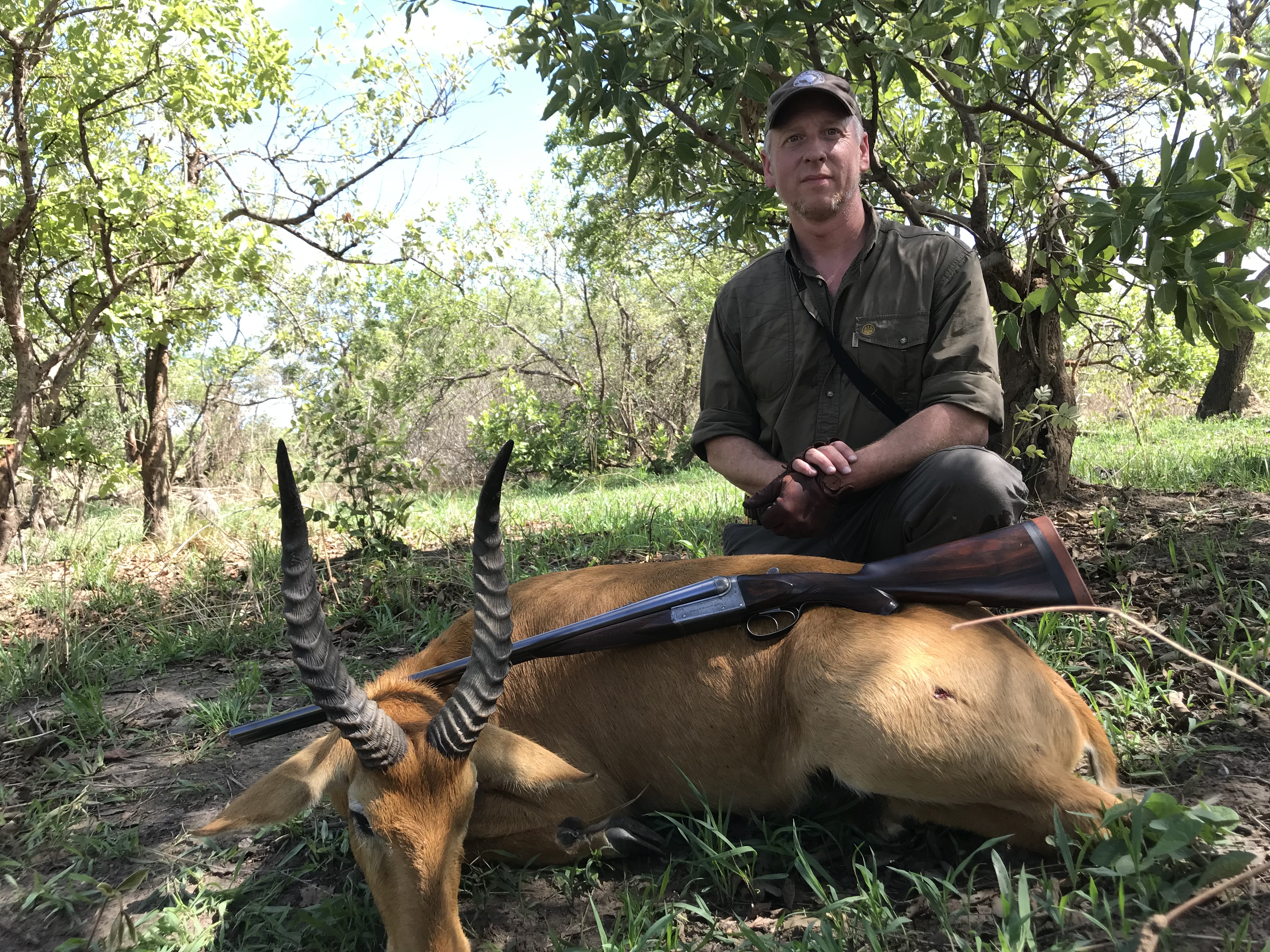 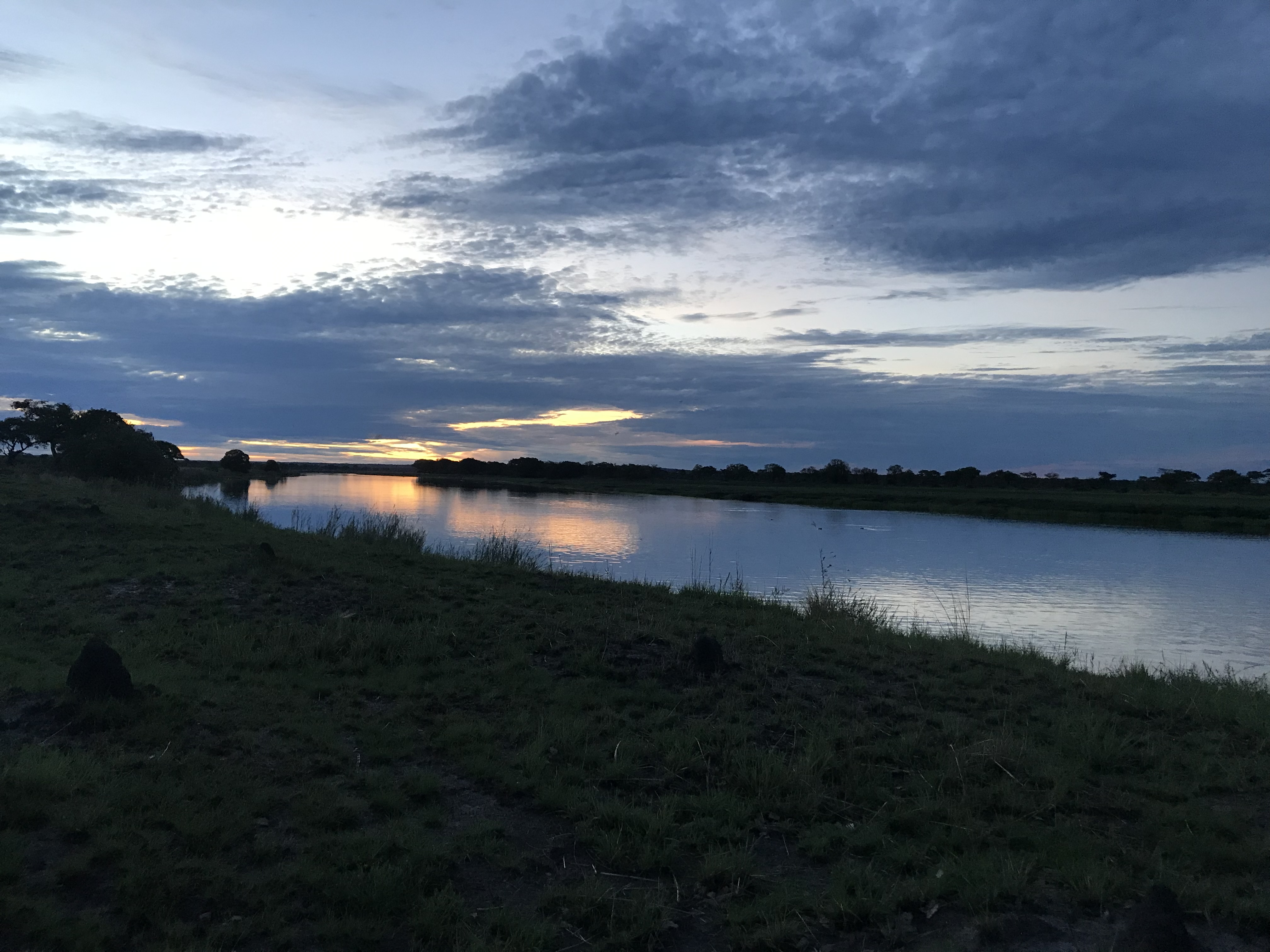 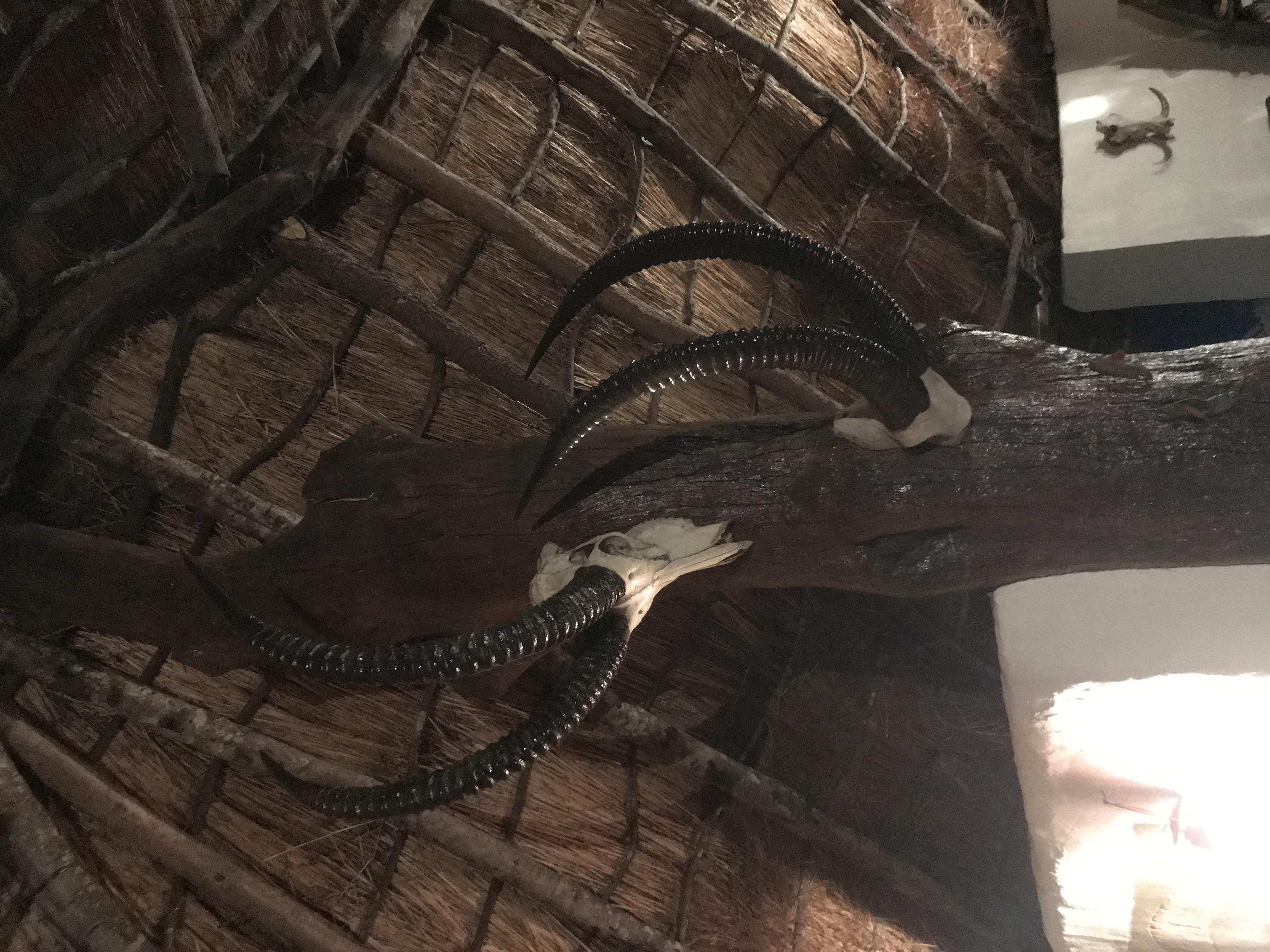 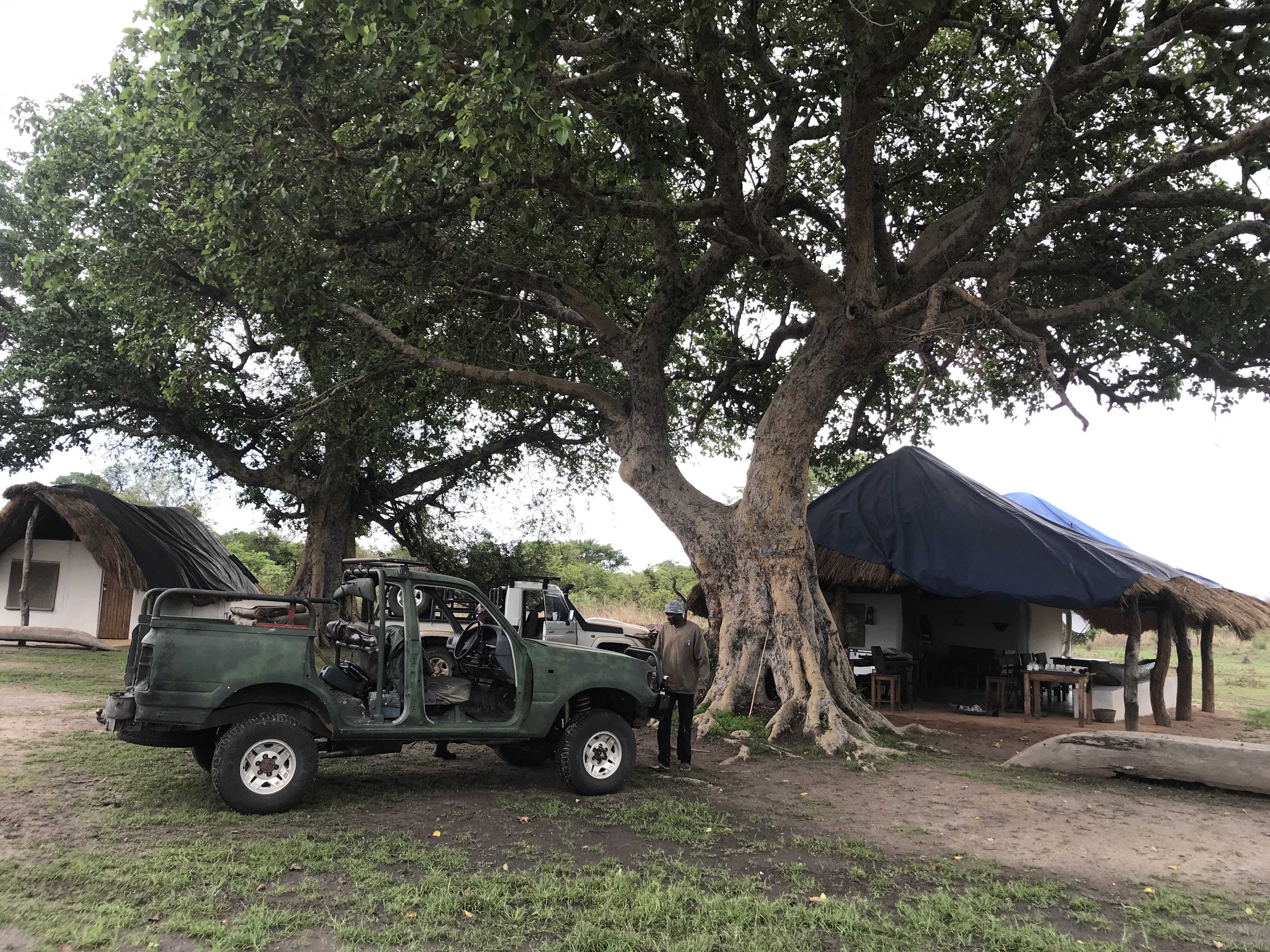 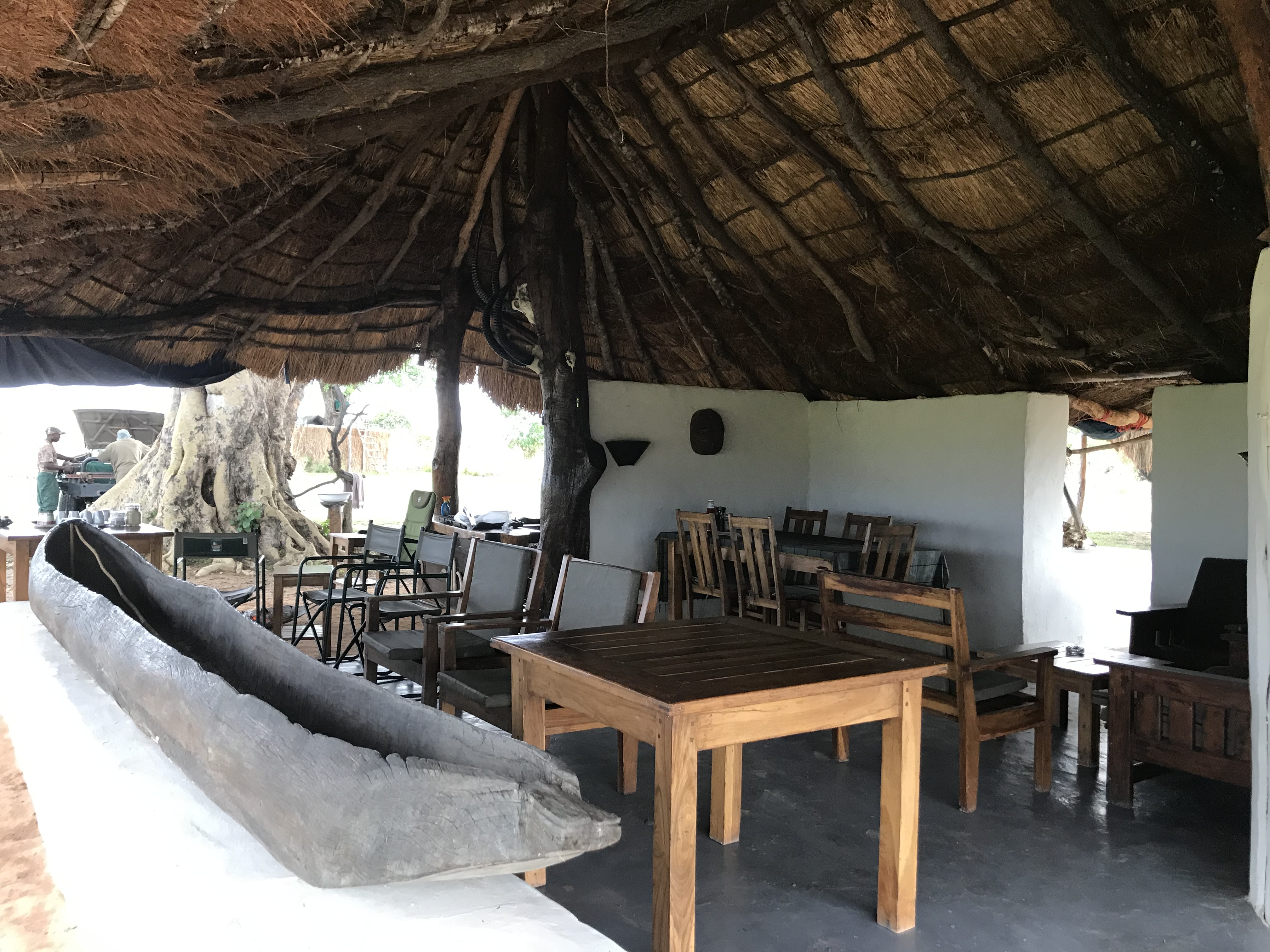 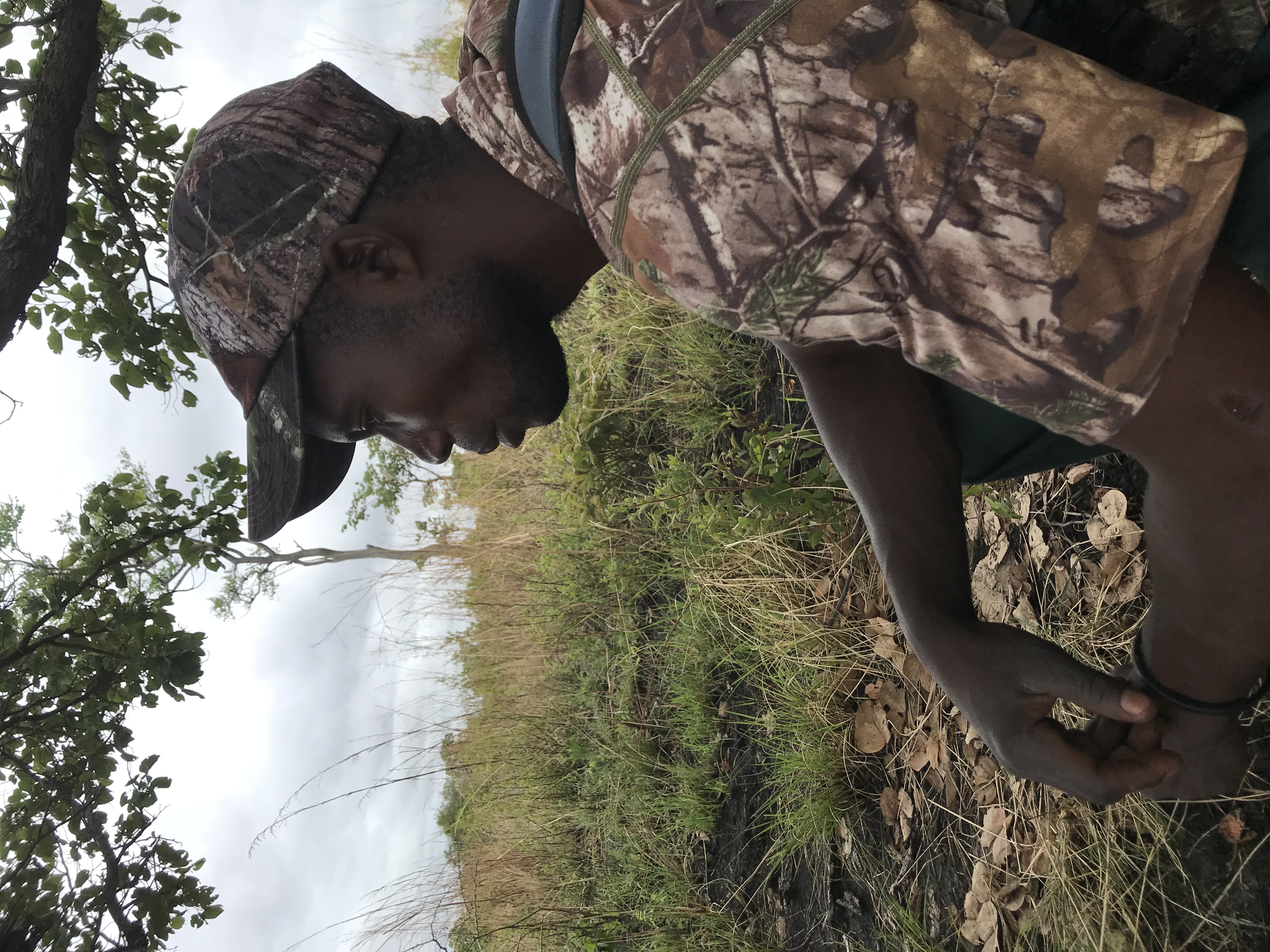 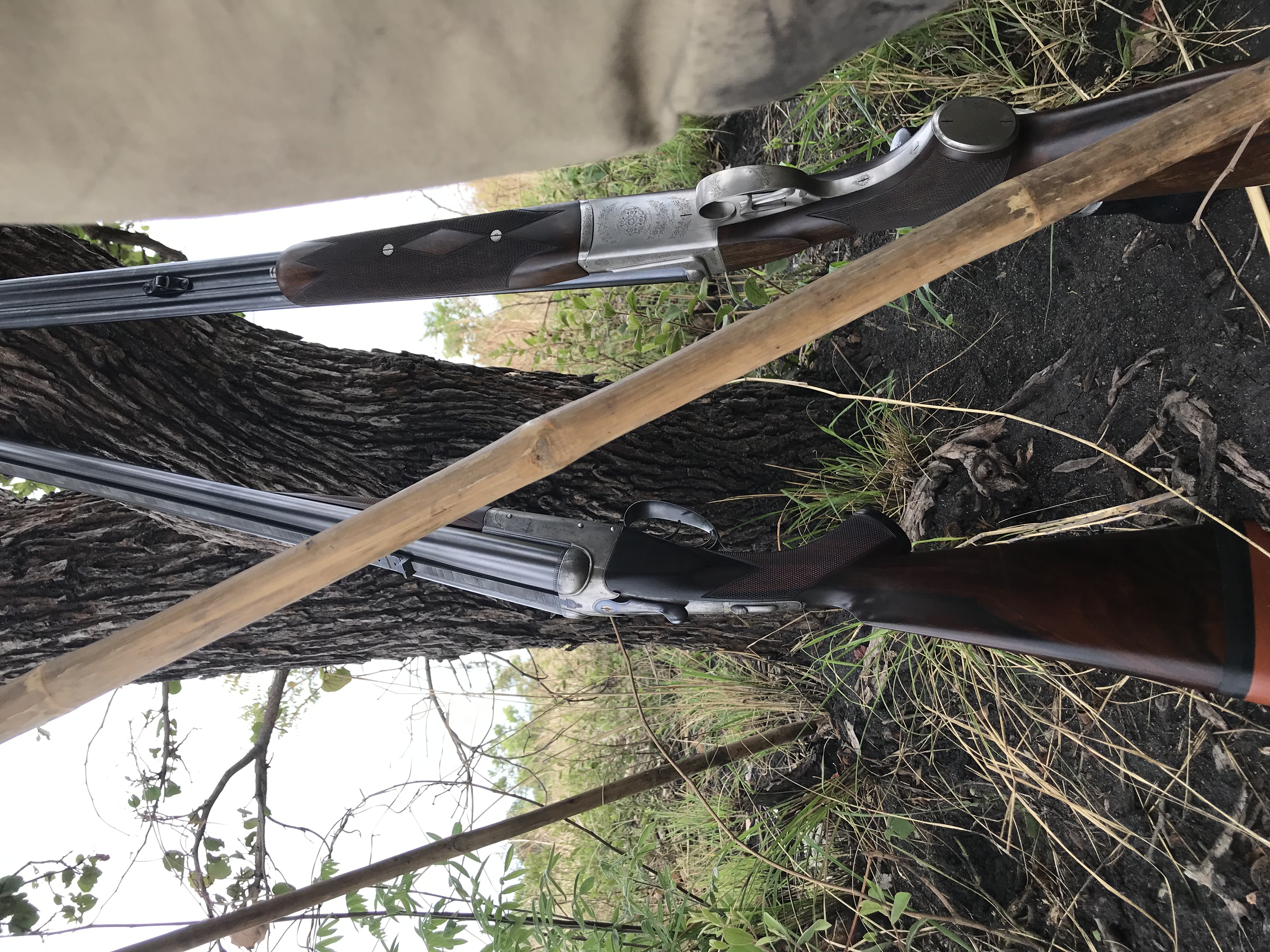 great start, zambia is a bucket list location for me!

cant wait for the rest

I really look forward to rest of your report. I hunted Zambia in 2006, Andrew was my Dad’s PH. My dad really enjoyed hunting with him. He talked me into crocodile hunting with my PH in camp.

Great write up Buddy! Can’t wait to read more.
I’ve seen the photos but the write up is just as good.

Not many hunt reports so keep typing! Thanks for sharing and looking forward to the rest.
Those who would give up essential Liberty, to purchase a little temporary Safety, deserve neither Liberty nor Safety. Ben Franklin

Enjoying your report and look forward to the rest.
L

Great so far, looking forward to the rest!

Great read so far!! Thanks for sharing!!

Grand hunt so far! Oh am I envious! Thanks for the report! I am so enjoying this vicarious escape!
Africa on my mind. 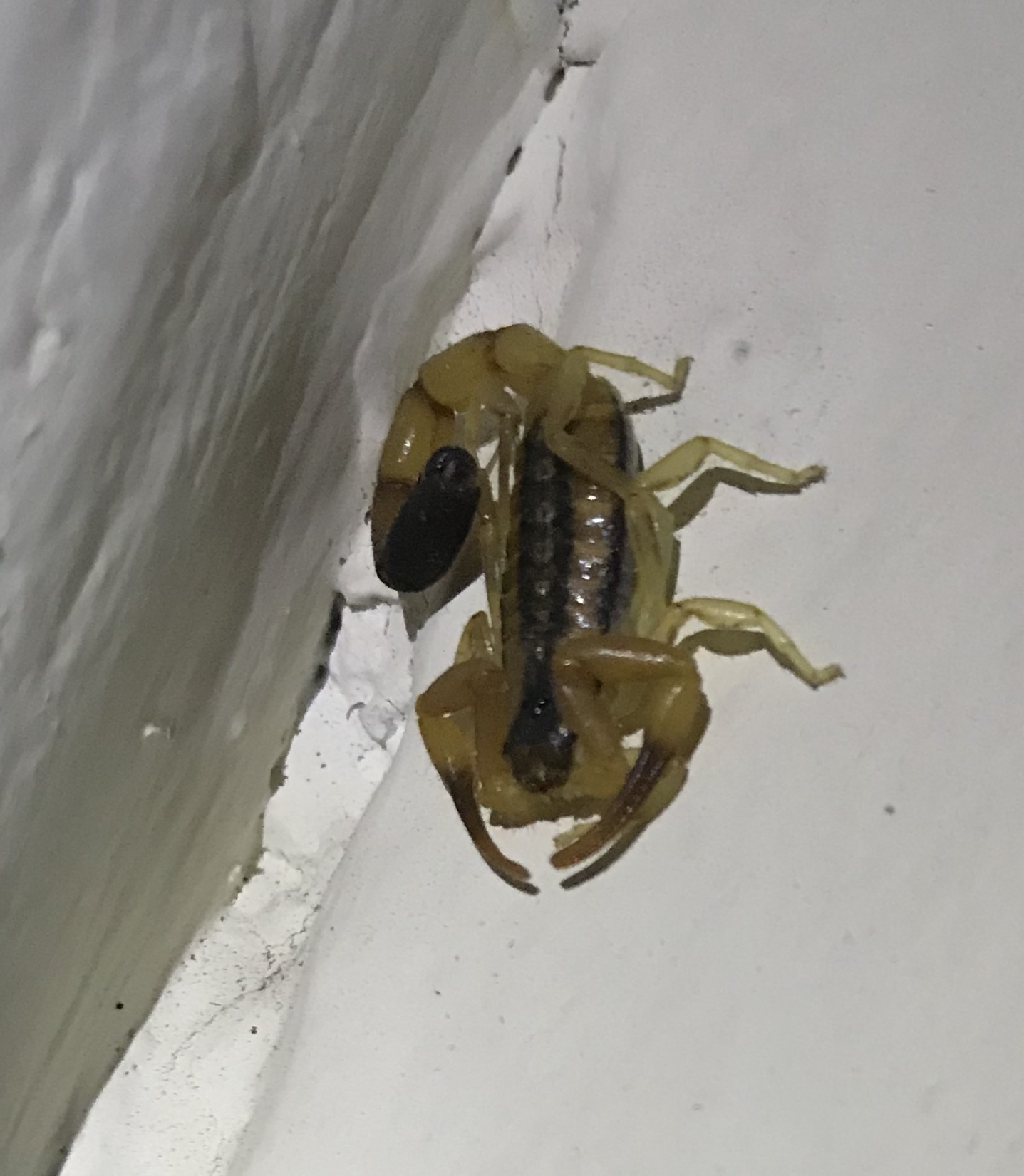 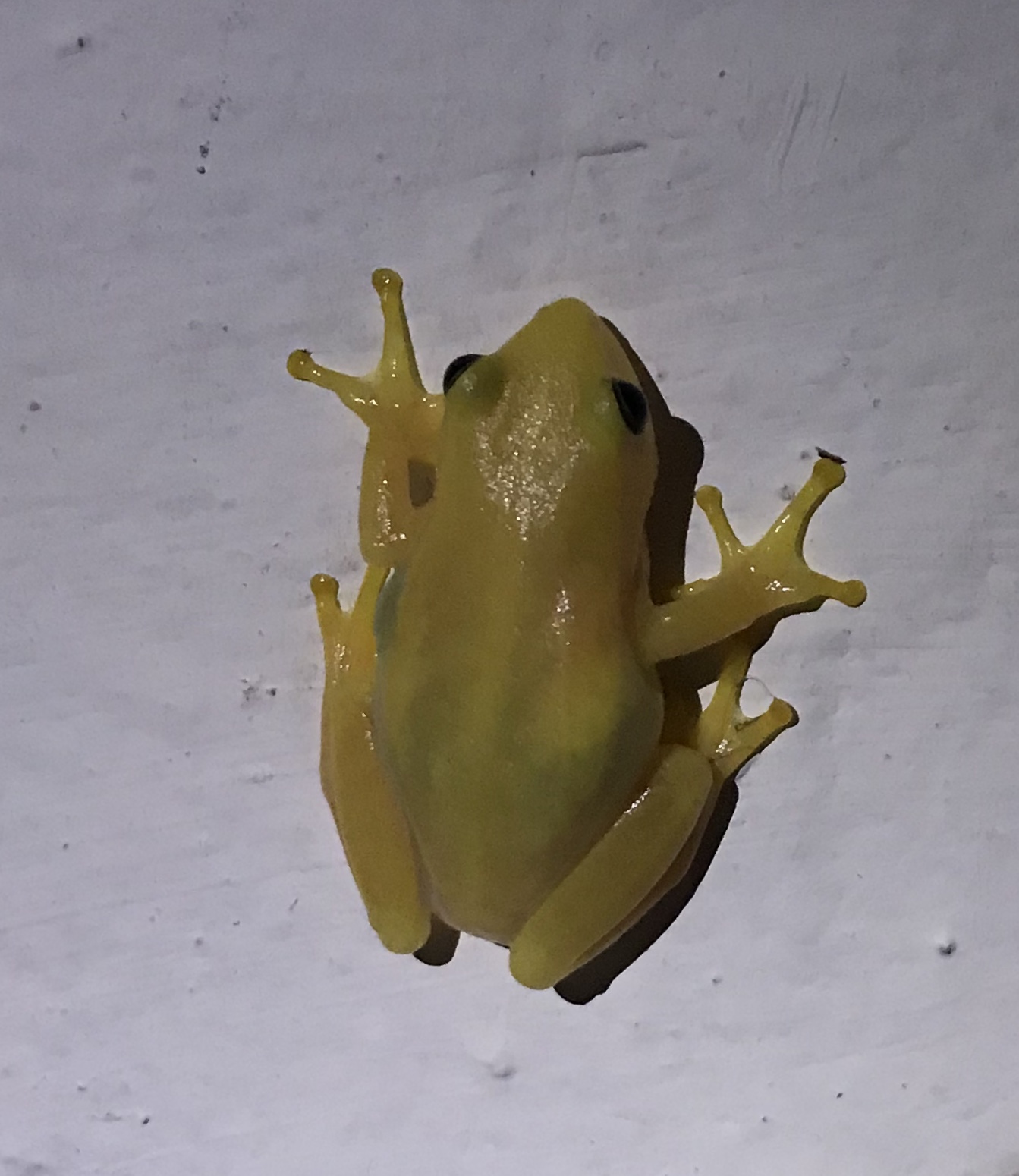 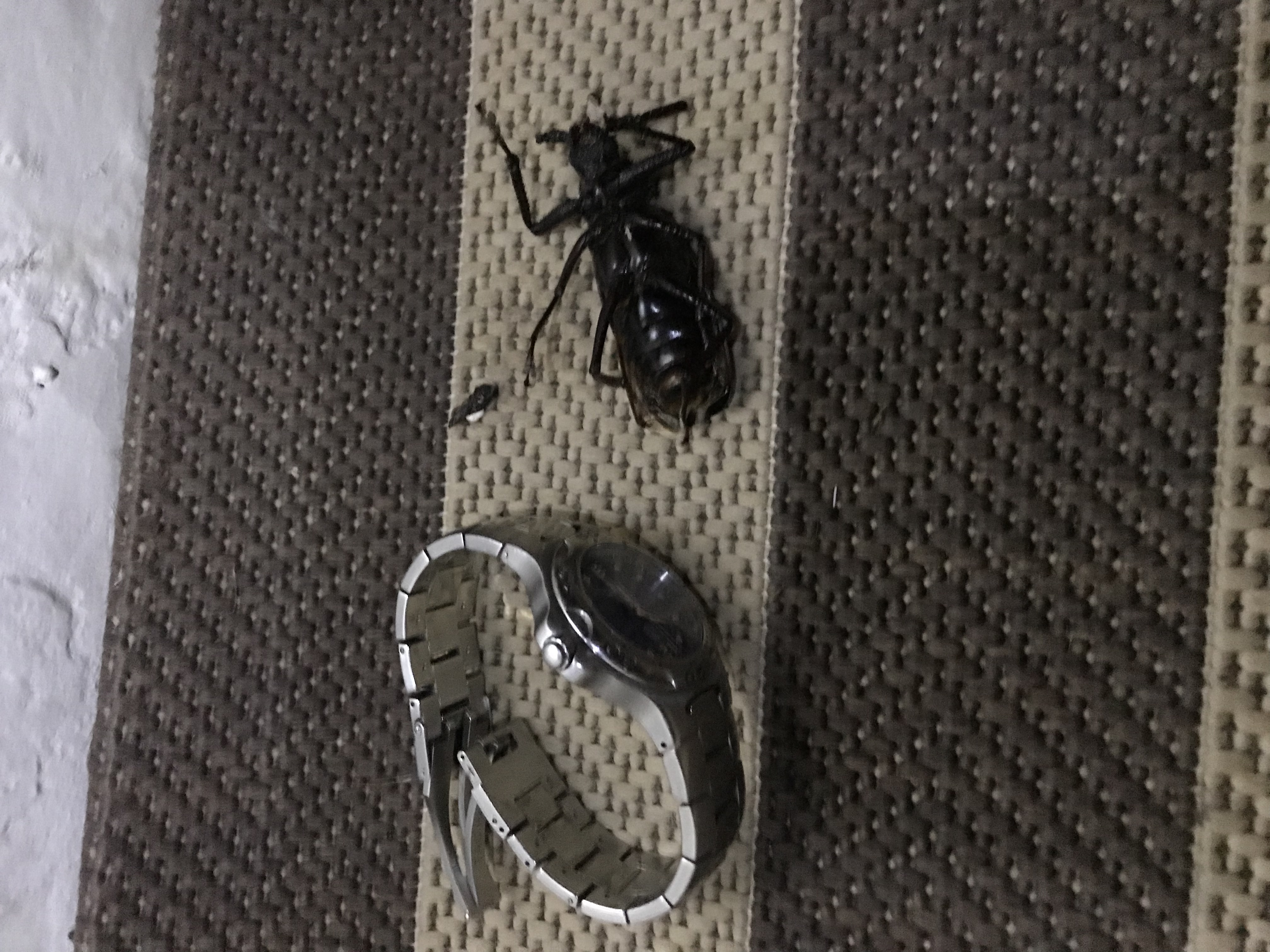 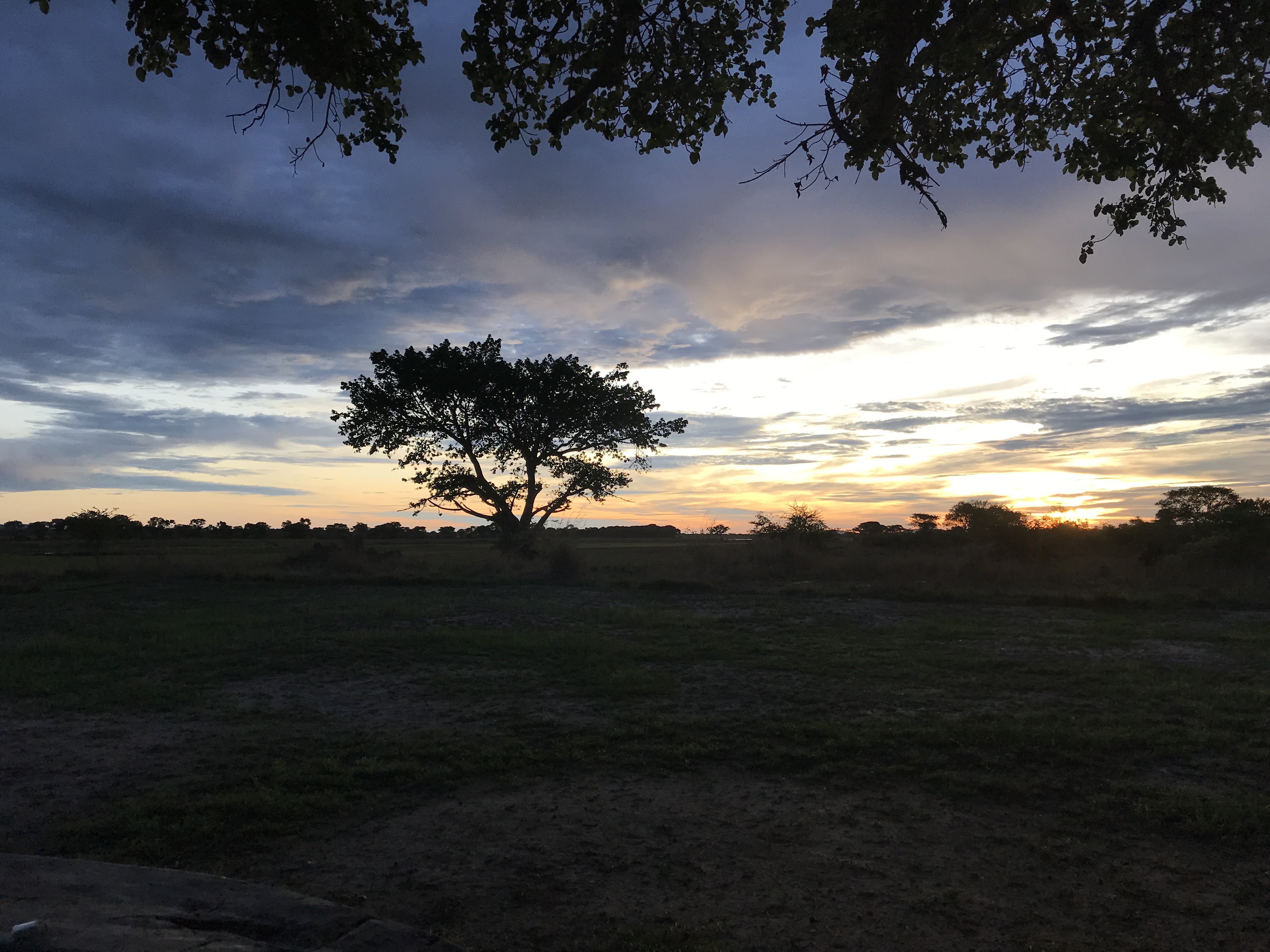 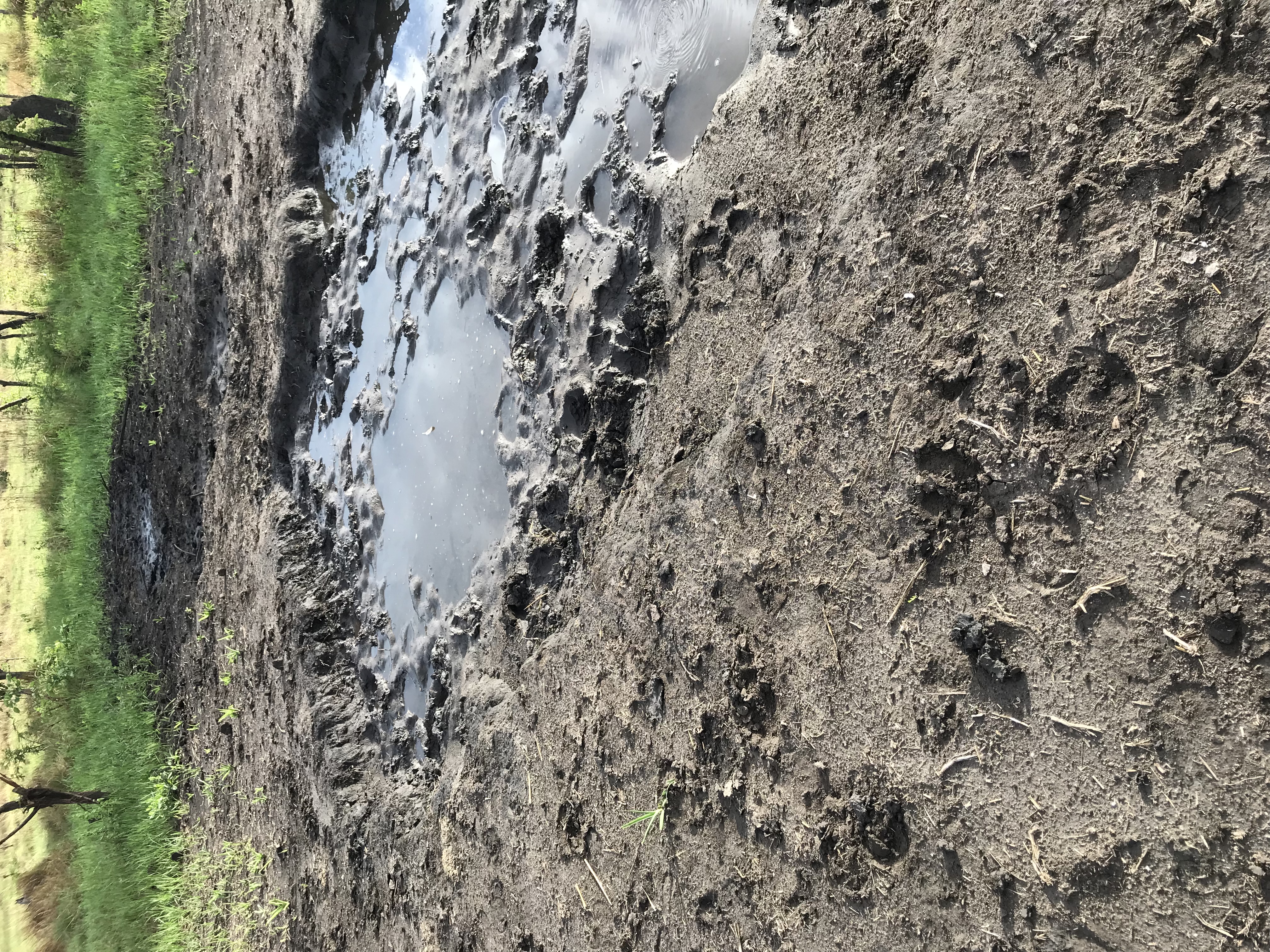 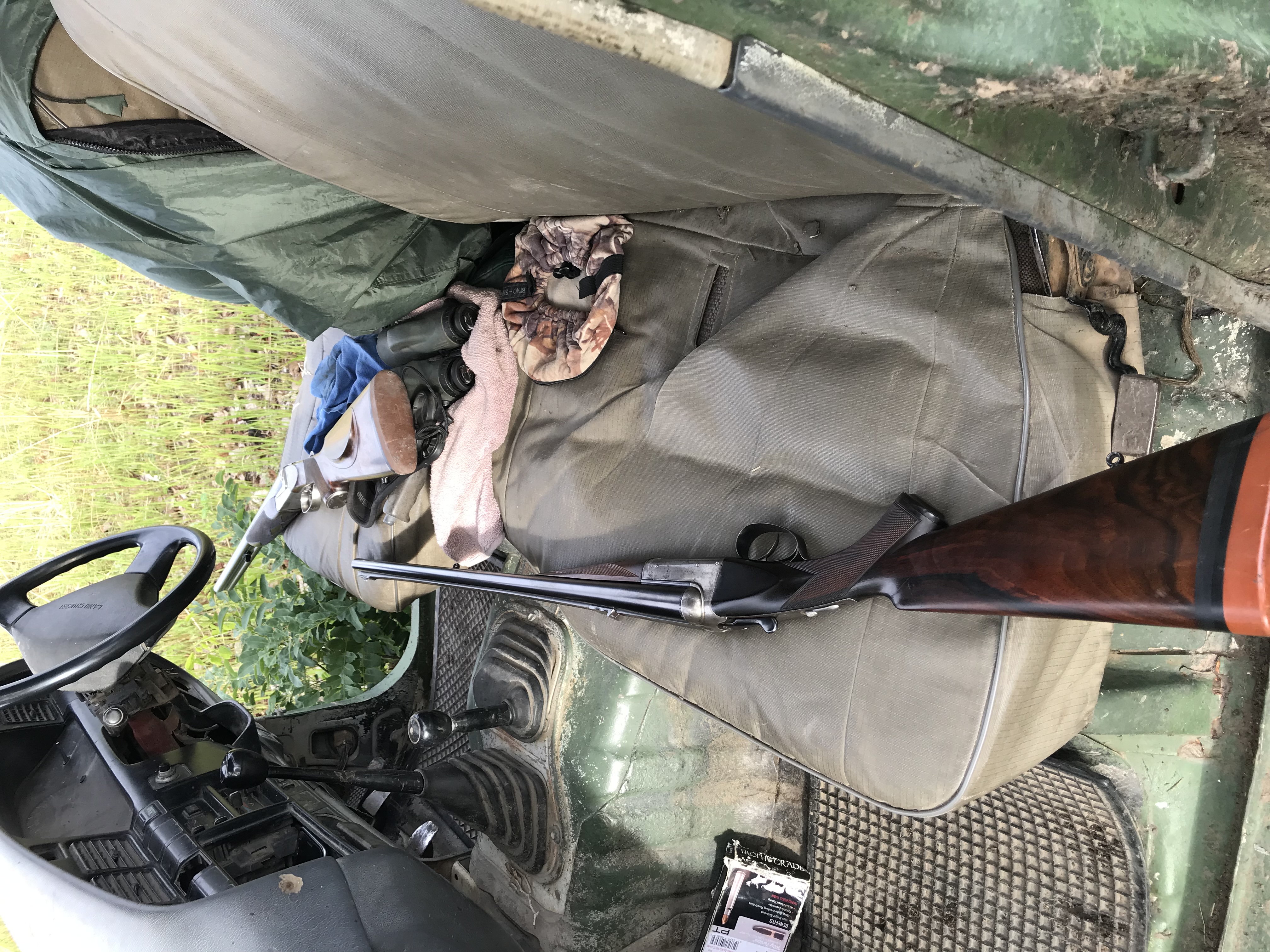 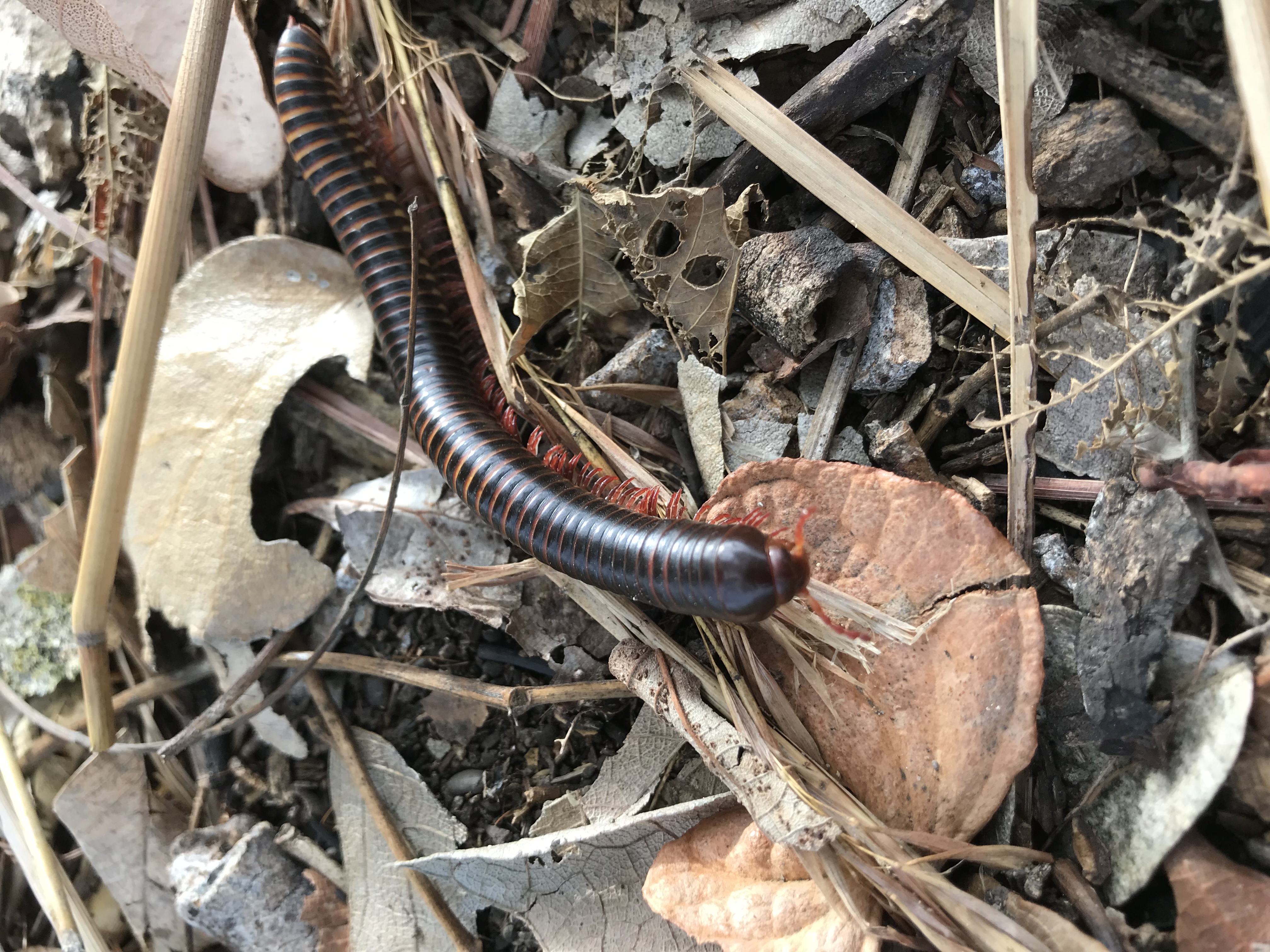 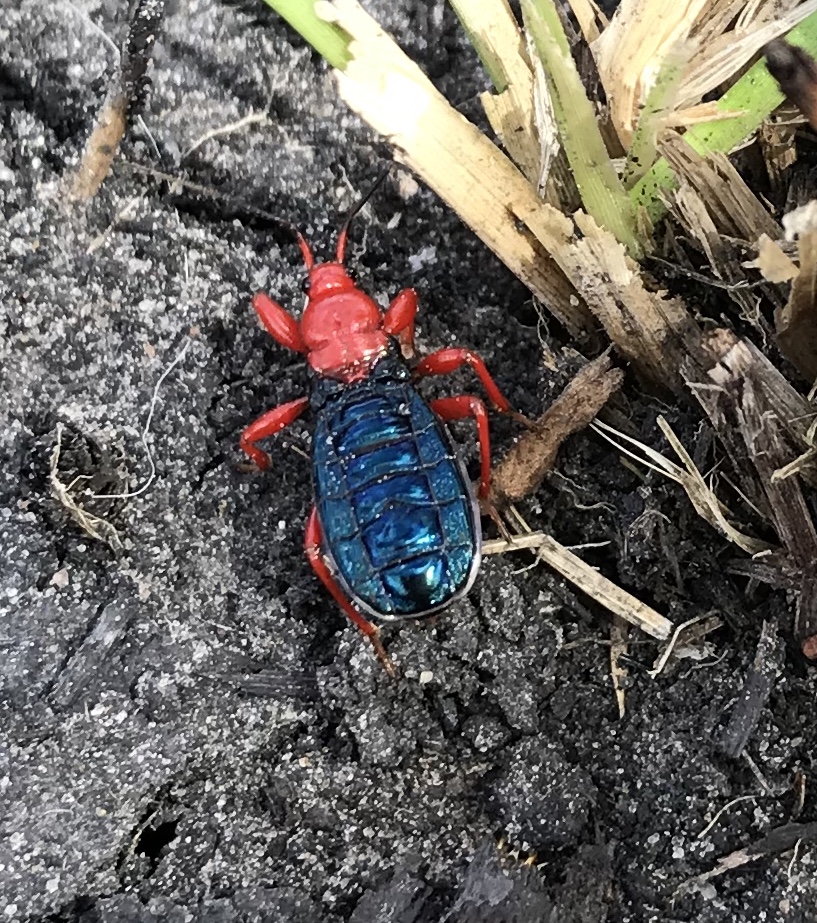 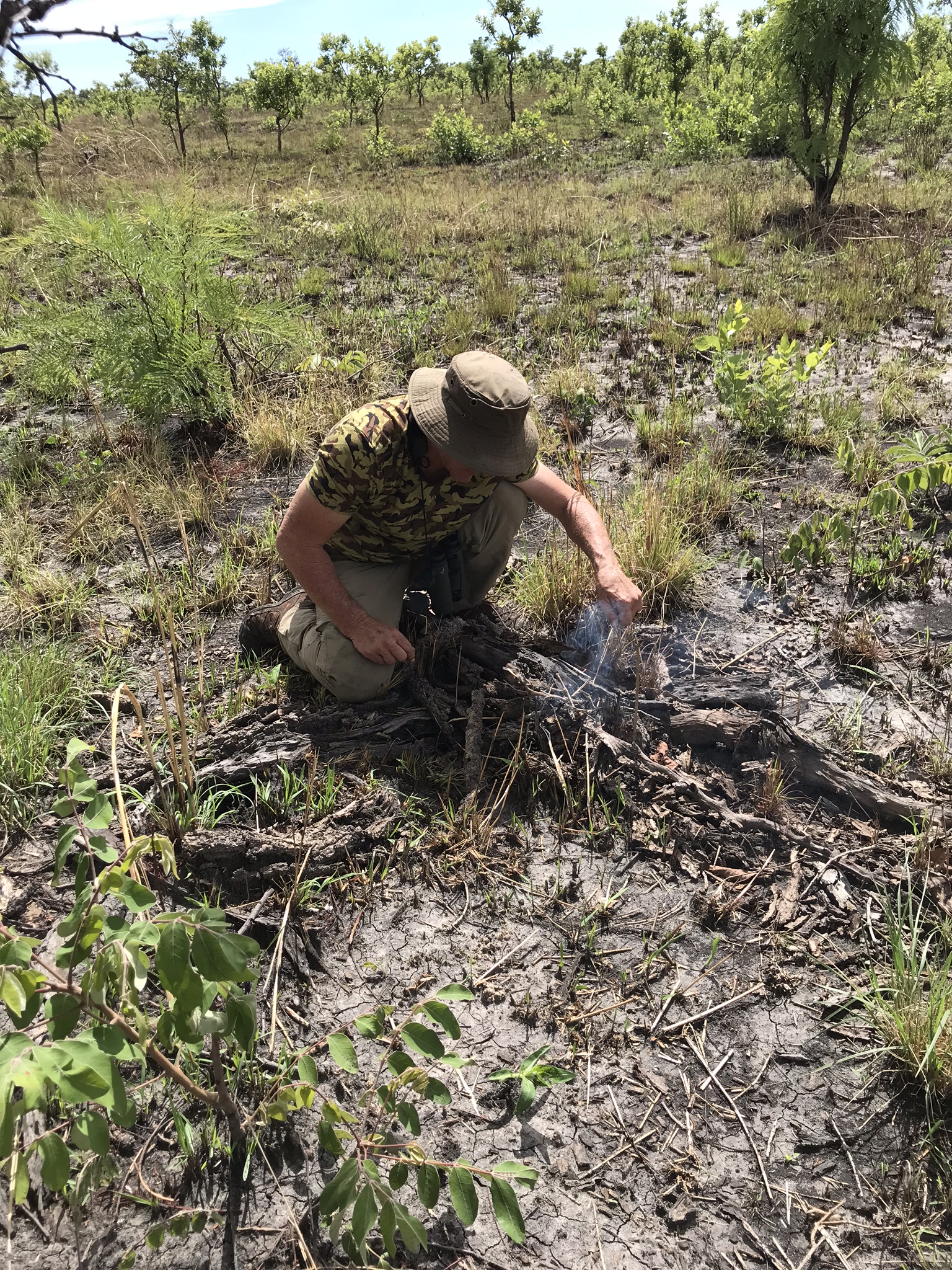 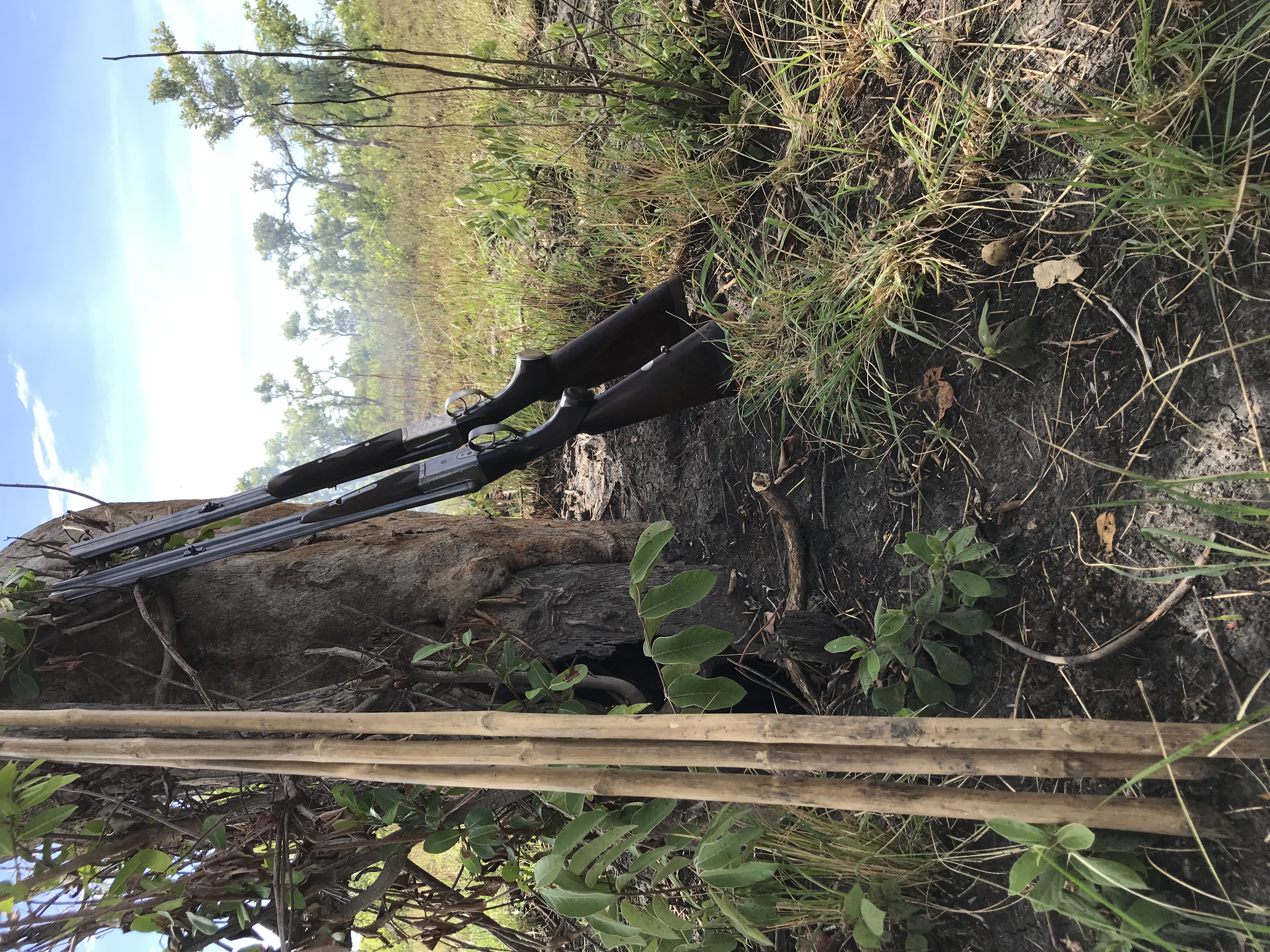 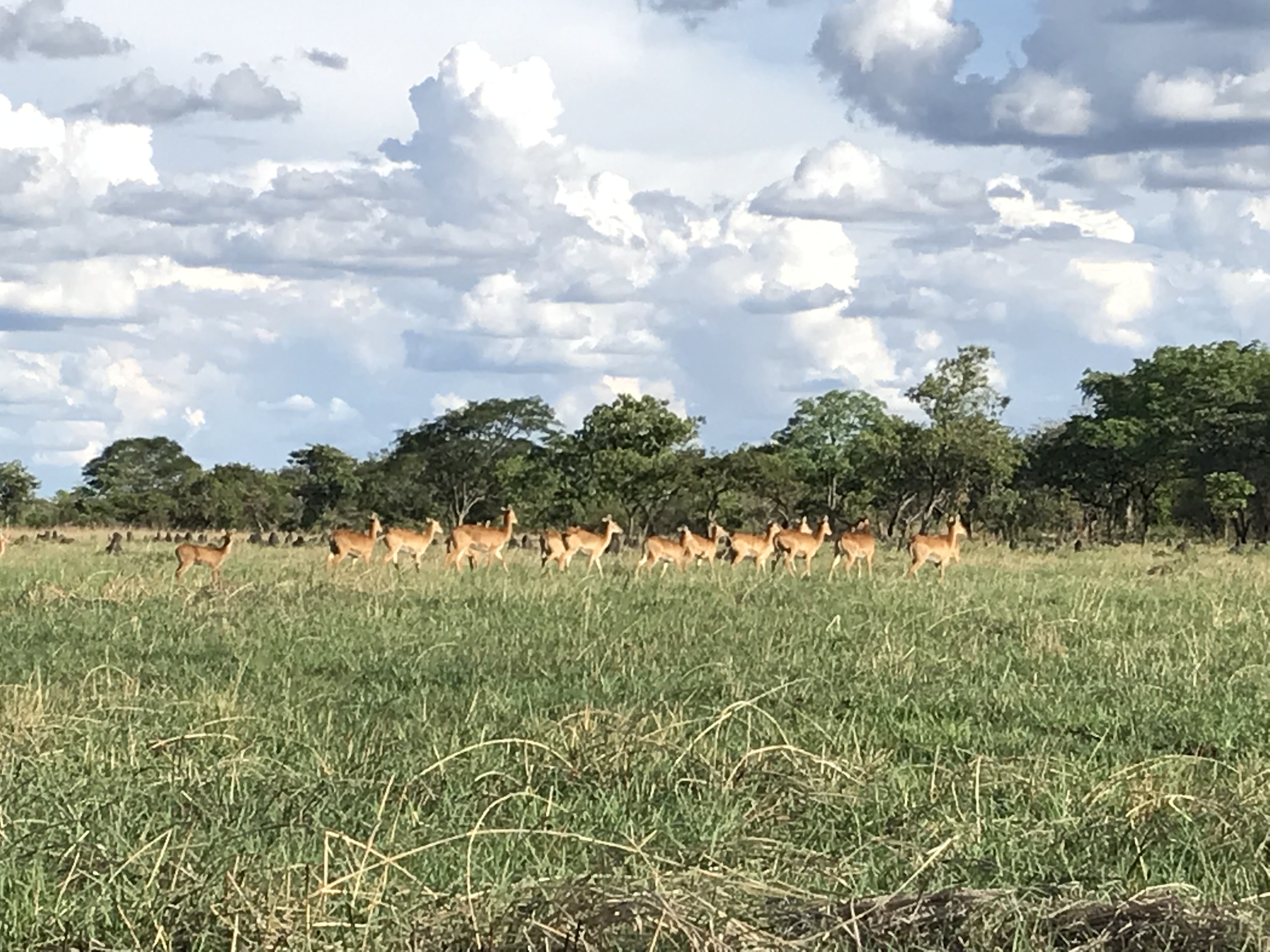 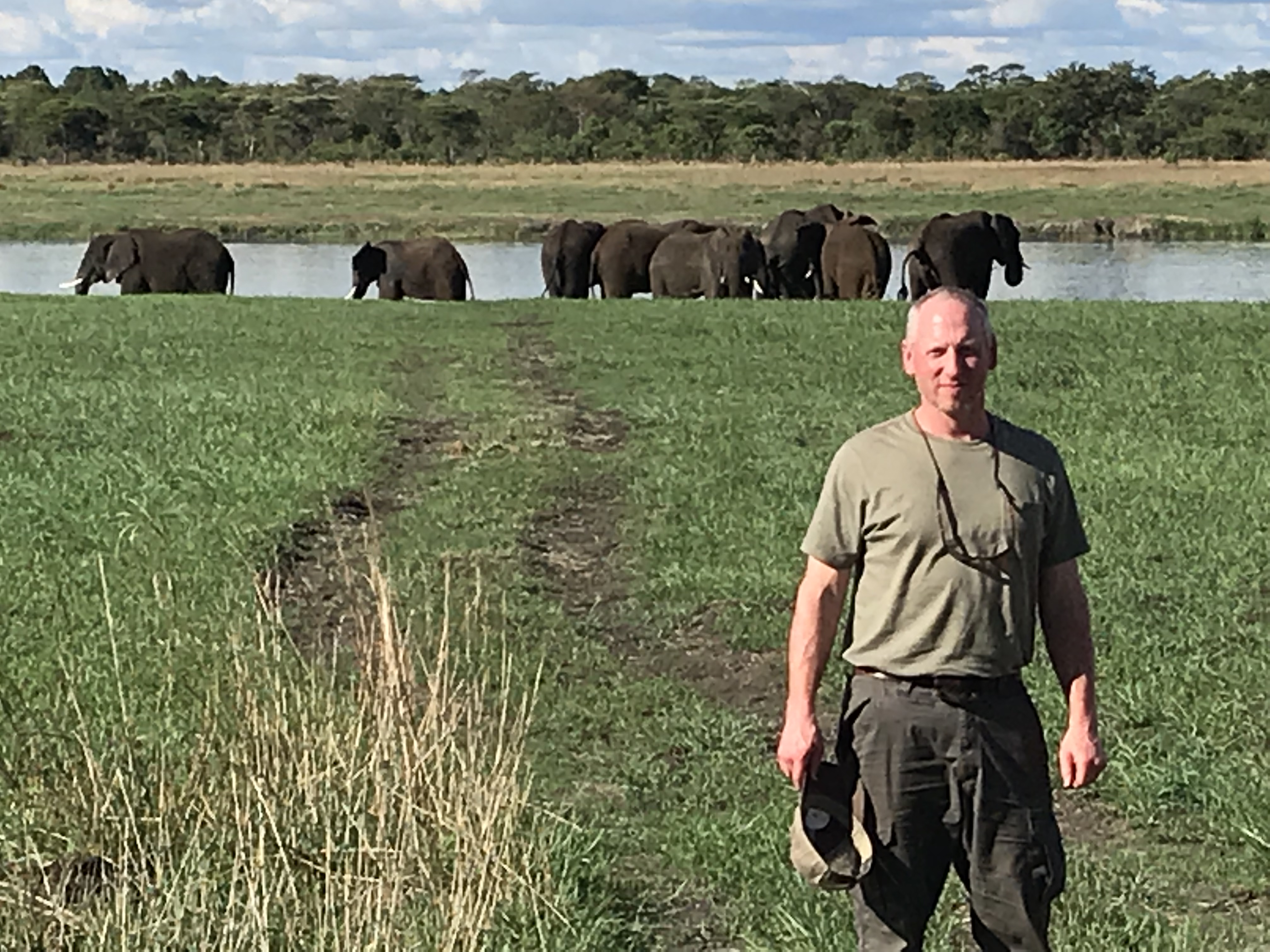 Great photos! yikes!!! There’s some scary looking bugs that time of year!
Africa on my mind.

I did not play with ANY of them
You must log in or register to reply here.