Women as Professional Hunters; What's with that?

The occurrence of Professional Hunters of the female persuasion seems to be quite rare and I can say that I have not been in the company of a full fledged female PH on any of my hunting excursions as yet. If I am so fortunate one day I will not be concerned.

I know of one PH that in her own words is "East Africa’s only female licensed professional hunter." 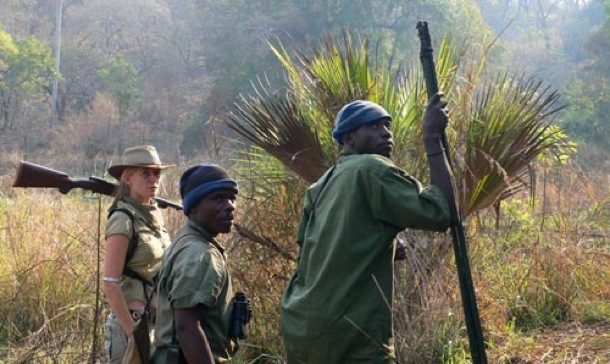 Natasha did a five year apprenticeship and went on to offer hunts in East Africa.
She offers Safaris as long as 42 days!!

I doubt she has a huge clientele. Not due to her gender but based on what she is offering. You have to want to Safari, not just collect trophies as quick as you can.

A description of the method of Safari on offer:
"But as far as our own transport is concerned.. those two shorts-clad sticks that were meant for walking will be the way forward at most times. For 16-42 days we will be will be out exploring and hunting. Only to change areas do we interrupt our trek and get into a small aeroplane for a few hours."

I'm not sure that I am tough enough to hunt with her.


During my PH training in South Africa I did have two female classmates and they studied and performed along side their male counterparts without any issue.
In the end I was bested by one of my female class mates on the written exams, indeed everyone was bested by this female classmate. She got the highest marks on the exams of anyone in Limpopo. Quite an honour. I had joined an auspicious although large group of people; Everyone, that got lower marks.
I congratulated her heartily, as did the rest of her class mates. She is not working in the hunting industry and did the course as part of her academic training and has graduated from college and moved on in her professional career. We are still friends.

She was able to share one of her successes in the final practical portion of her studies. A Cull Kudu. 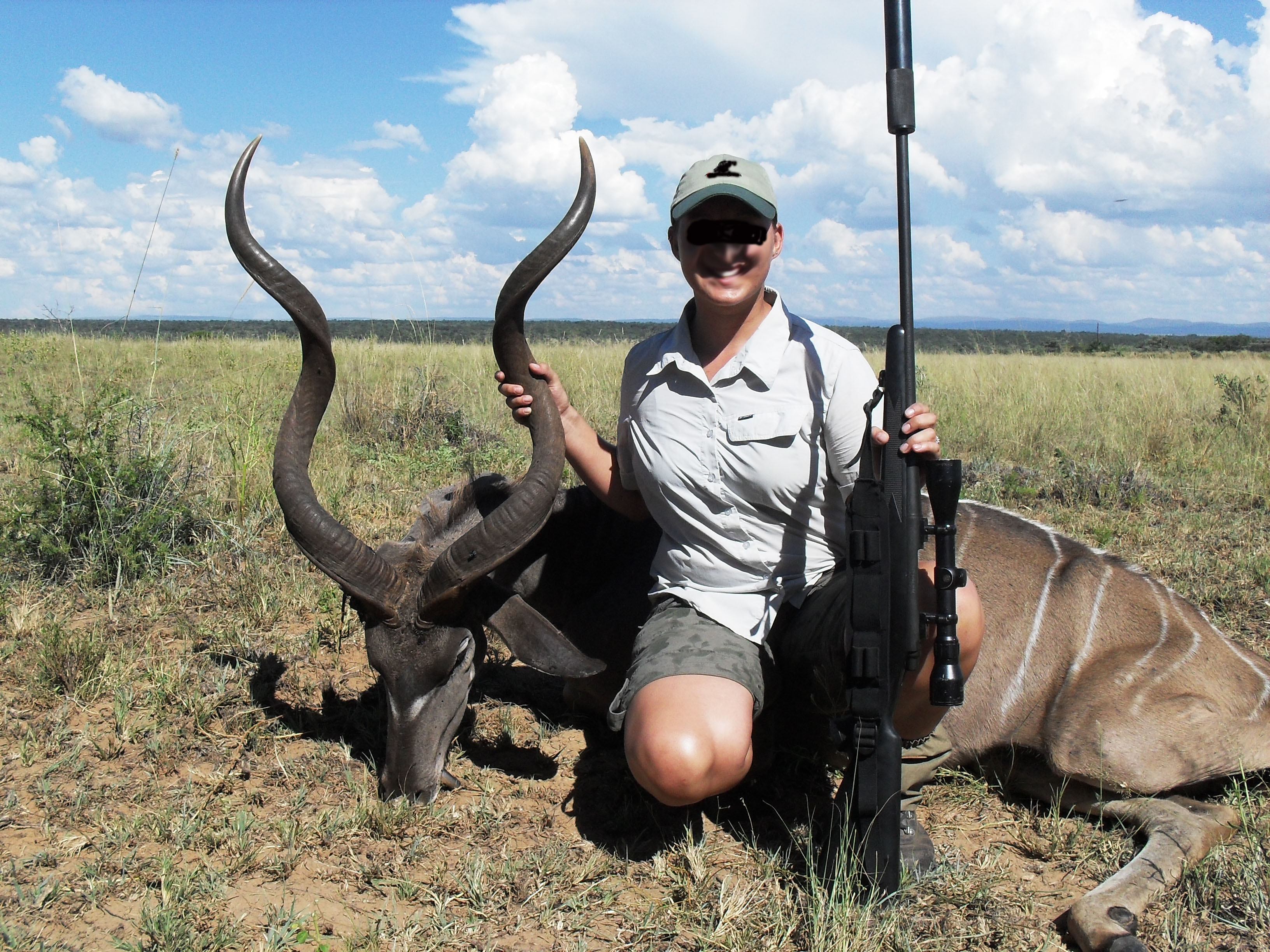 Shortly after my passing the PH course I was to come into contact, through AH, with an energetic and ambitious young lady from Sweden who wanted to "do the PH course". She loved hunting in her own country and did plenty of it alone quite successfully.

The fact that a woman wanted to do the PH course did not cause a blip on my radar; Why Not?

I shared the contact information, background and passed on study materials and wished her well and good success.

Sometime later I got the news that this young lady passed the course and then went on to actually do some guiding in Canada. (Here we call them Guides, not Professional Hunters)

The next crossing of paths came a while later when there was a post on AH. This post was requesting support from other AH Members in her endeavour to win a contest.

That contest is an American made for TV reality show (Extreme Huntress) that puts the contestants through their paces doing various activities related to hunting. Please note how general my description is as I have only watched a few clips, never an entire episode because the show is not offered in my geographic area.

In researching this thread I noticed that the Extreme Huntress competitors have been requesting AH members assistance since it started back on 2009 with Rebecca Francis.
http://www.africahunting.com/threads/hey-guys-this-girl-needs-your-help.1605/

There appears to be a thread just about every year. Never realized it before.
It is reality TV and designed to entertain and I can not say that it renders any answers about the contestants. Maybe someone who has seen these shows can comment and fill us all in.

Toss in some search criteria "female professional hunter" in Google and you get hits like:
There is only one PH that will come up: Natasha Illum Berg

Other names that come up for various reasons.
Most are TV personalities or have garnered attention for having hunted a lot, or hunted a Lion and garnered hate mail.
eg. Melissa Bachman, Olivia Nalos Opre, Eva Shockey, etc.

Are these "Hunting Bunnies"? or just women who hunt. You decide.
Don't confuse Reality TV with Professional hunting, nor marketing with the real world.

This was also an interesting hit.
http://www.shootlikeagirl.com/prostaff.html
The sites name is an obvious positive play on words that are usually used as a disparaging remark guys use .... "like a girl".
This site and there are 49 women hunters and shares their "bios".
It looks like a positive site to get more girls into the hunting and shooting sports.


One way or the other, women make up half the population and if they want to hunt I am quite happy to have them join me in the field in what ever capacity they choose. I hope Erika goes on to great success in her chosen career.

If only I had the means, both financial and physical, to join Natasha Illum Berg on one of those true Safaris she has on offer.

Good post brickburn and it great to see that you stayed in contact with some people who you did your Ph course with.

If we are smart about this women can only help us save the right to hunt for us all. Wives ,mom or even girlfriends only make us stronger as a group and can help spread the want to hunt on to kids as well. I would have no problem hunting with a female guide or PH if they have the same training and knowledge as any other guide.

I think Natasha does PH work for Robin Hurt Safaris in Tanzania.

I wouldn't have a problem with a female PH, as long as she is good at the job, and can provide a quality safari. Sometimes women have a unique perspective on things that we men can often overlook.

All semantics, but I understand that she may have quota from Robin Hurts concessions and or others to provide her hunt offerings.

BRICKBURN said:
All semantics, but I understand that she may have quota from Robin Hurts concessions and or others to provide her hunt offerings.
Click to expand...

I was cruising the Robin Hurt website awhile back, and came across her on their PH team profiles. Sounds like she provides a very interesting safari. But I agree with you, in wondering if I would be tough enough to hunt with her

. ON a 42 day Safari I think I would have to take Sundays off, to give my old bones a rest.

billc said:
If we are smart about this women can only help us save the right to hunt for us all. Wives ,mom or even girlfriends only make us stronger as a group and can help spread the want to hunt on to kids as well.
Click to expand...

Yes, but then they claim our favorite firearms as "theirs", just like the spare space in the garage or basement!

I would hunt with Natasha any day.....but I simply cannot afford the astronomical rates she/Robin Hurt charges for such an adventure....a prolonged safari on foot with porters in the wilderness of Selous must really be something....a taste of old Africa as she puts it..

I believe she really grasp what this is all about...
"I have taken more out of alcohol than alcohol has taken out of me.” Winston Churchill

Thanks for sharing this Brickburn, very nice.

Mr. 16 gauge said:
Yes, but then they claim our favorite firearms as "theirs", just like the spare space in the garage or basement!

Isn't that the truth! . . . . I've taken our adult daughter on a couple of African hunts over the years. Besides the overall travel and hunt cost what 'used to be' my favorite .300 Wby and what 'used to be' my favorite .270 now permanently reside in the gun safe at her house.
.
There are many degrees of wounded . . . there is only one degree of dead

Her webpage suggests that a 42 day safari can cost up to $180,000.00. She does hunt in Robin Hurt concessions and quota.

I am intrigued by this type of Safari

My wife will be doing her PH course early next year, her knowledge on the African bush is incredible, she has tracked along side some of Botswana's finest guides and her shooting skills are some of the best I know....hell she could circumcise a Springhare from 100 yards away!

I know a few female PHs and I believe having more of them in the industry is a good thing.
"This red soil is in your blood, you'll never leave Africa!"

Working towards a dream and I will get there!!

Good stuff. Women are only bound by their aspirations, and only hindered by prejudice.

Mr. 16 gauge said:
Yes, but then they claim our favorite firearms as "theirs", just like the spare space in the garage or basement!

But that's all you've got???? Come on now!
HUNTERS make importation bans work!

Royal27 said:
I was wondering when you might say something!


It's a well deserved kick in the Cajones is what that is Royal.
It is always best for a "journalist" to slant the article a bit to get the debate going.
Of course there is more than one female PH working in the industry.
I want people to add them into this thread.

Is Zambia in Africa? 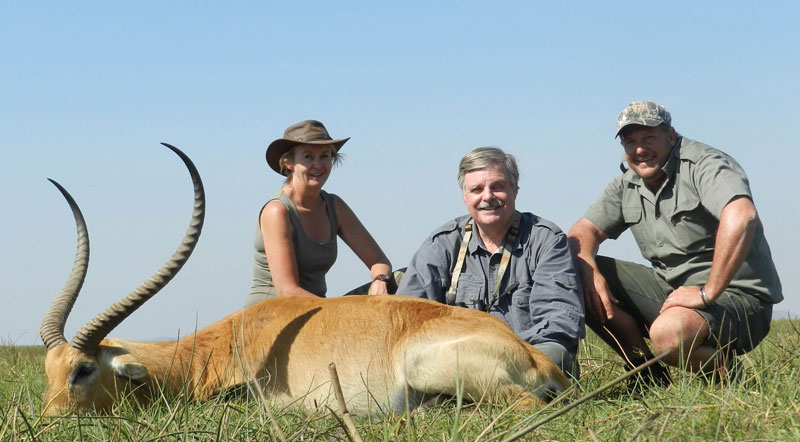 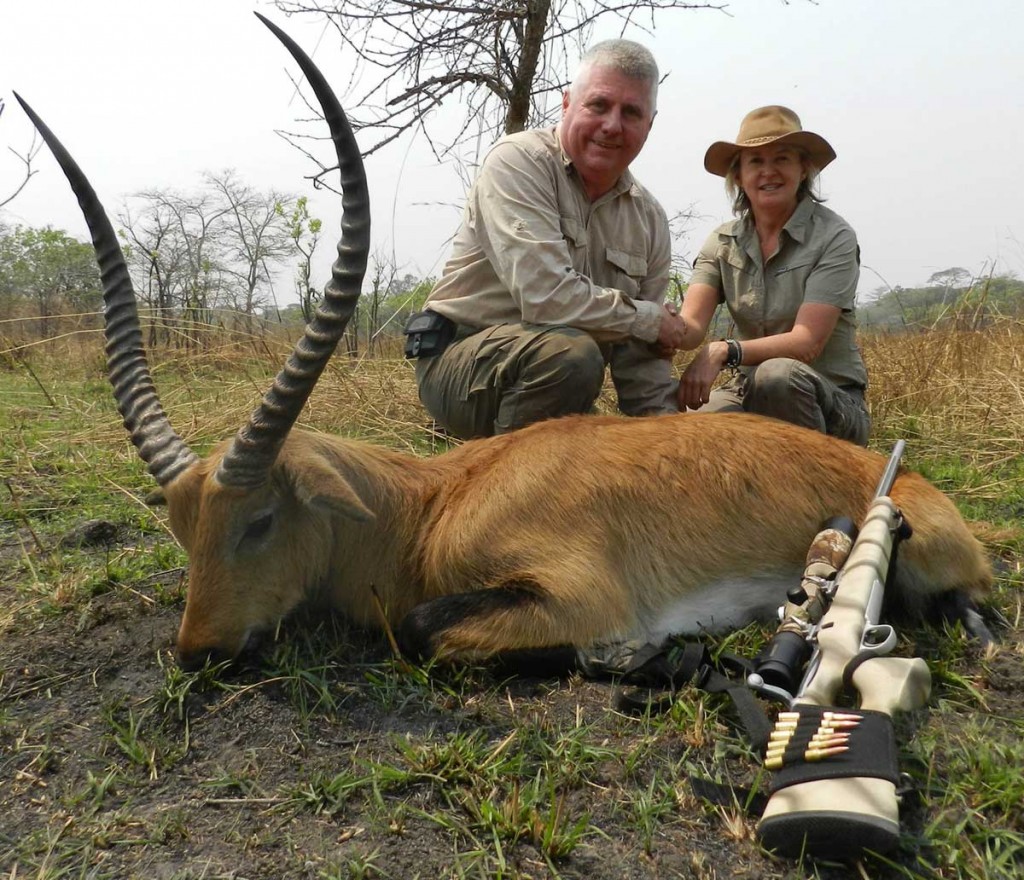 Royal27 said:
I was wondering when you might say something!

ok here are some more of patsy 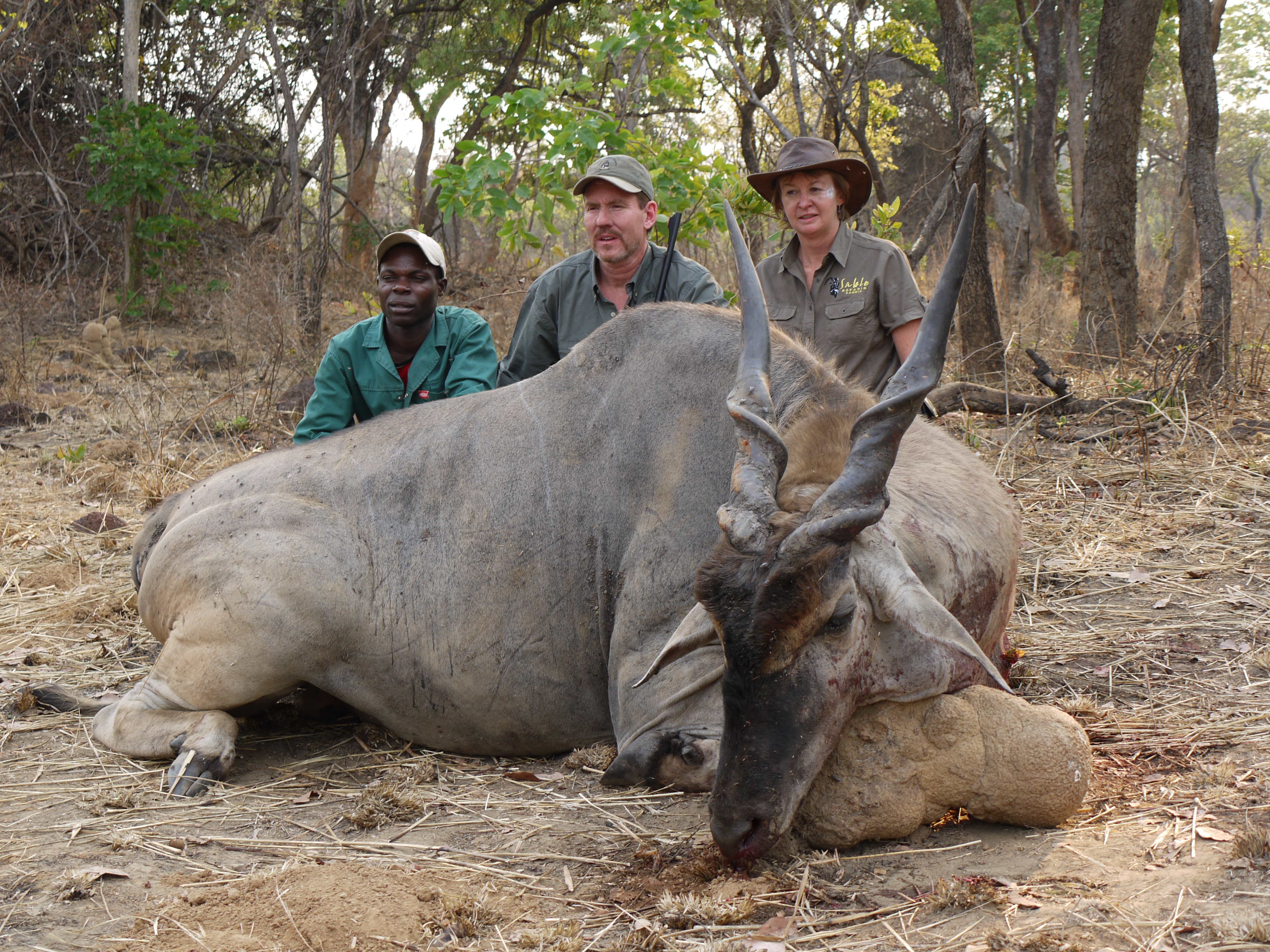 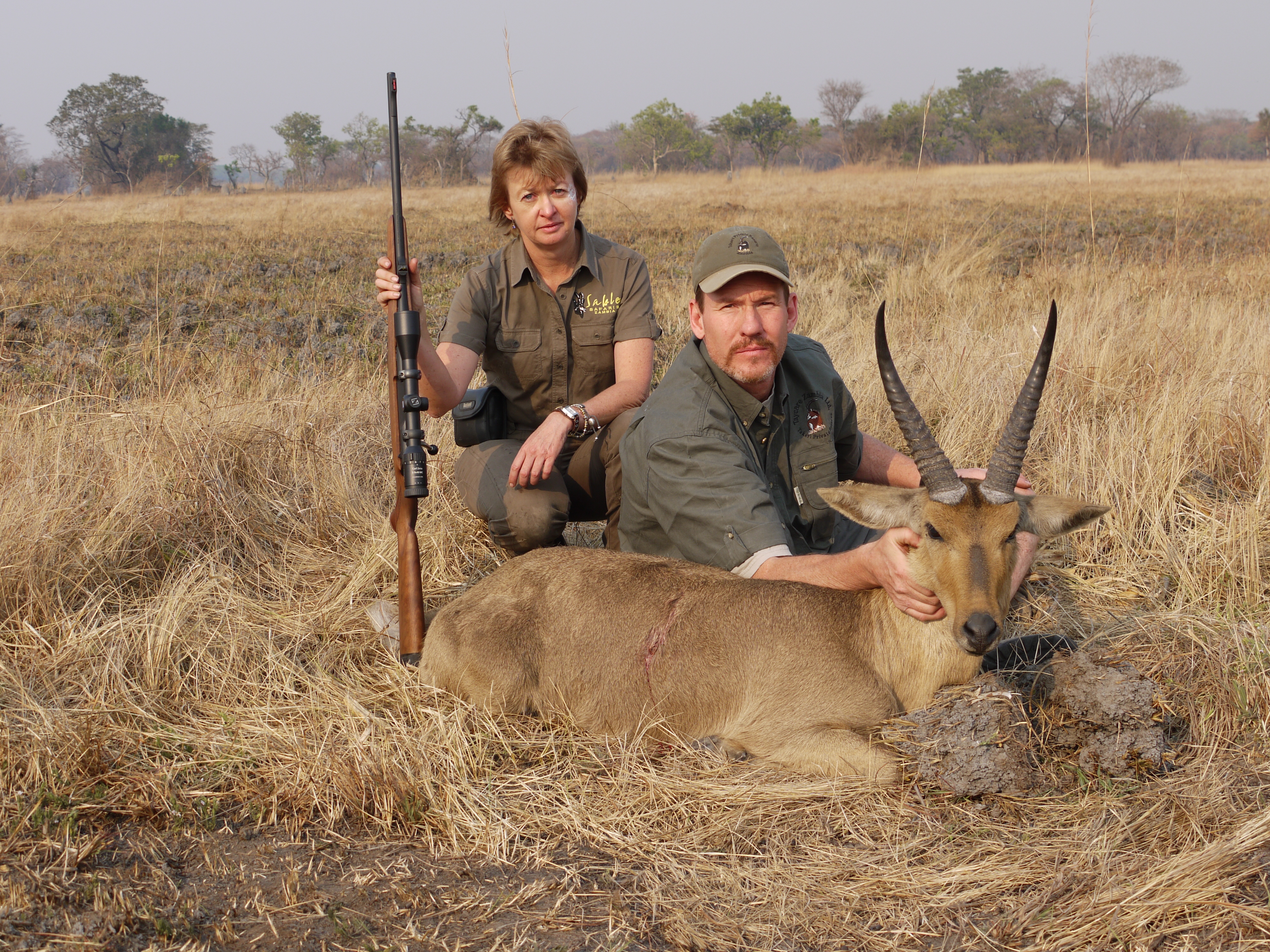 Well, at least you will admit what you're afraid of!!!
HUNTERS make importation bans work!