Well thanks to all the enablers here... LOL

Beautiful rifle, sestoppelman! If I had one like that I could not care less what I wear to the range for footwear. LOL

PHOENIX PHIL said:
I don’t care if you shoot it buck naked provided the pics are just of the target! How the hell haven’t you shot this yet?!
Click to expand...

Just got it yesterday!

sestoppelman said:
So do I!

Congrats Sestoppelman on an exquisite rifle and if it should shoot half as good as it looks, it will be bug holes! I've had a romance with the 7x57 since 1981 and have found it kills all out of proportion to it's modest size.
"while it is ancient there are few better cartridges on Earth than the 7 x 57mm Mauser and its grandchild the 7mm-08 fits in the same performance realm." Ross Seyfried

I love the wood, nice grain and figure and the colour is very pleasing. Best of all the pancake cheek piece with the shadow - very classy. A rifle to be enjoyed on all levels, well done!
Carruthers

Got up today, weather was nasty, about 40F, sideways rain. I thought hmmm, perfect day to get acquainted with my new rifle! Off to the range I went. Half hour drive each way.
I had a box I had loaded for sighter/fouler loads that consists of 130 gr SMK's with 40 grs of AA2520 that I just pulled out of my hat. This rifle likes them, put several in the same hole while doing a modified shoot and clean process. I wont call it barrel break in because I don't really subscribe to the theory however with a brand new rifle and barrel, I am OK taking it easy to start with. I did 3 shots slowly, clean with #9 about 3 times, then again but added copper cleaner to the process to get whatever may be there, which was very little.
I then tried 4 rounds of Noslers 140 gr AccuBond load which my Nosler M48 rifle doesn't like at all despite its reputation for accuracy. Well, sad to say this rifle didn't like it either, put 4 in over 2"! Use it for expensive sighters!
Running out of time now I had 4 rounds I loaded just before I left home using 46grs of Hunter behind the Hornady 162 gr. BT bullet. Put 4 in a fat one inch! I like this kind of shooting on a first go round!

So for the first time out I couldn't be much happier, looks like it will be easy to find loads for and it functioned perfectly in all ways. Mag holds 5 down though book says 4+1 but I wont tell them. I discovered something interesting that other owners may know. The floorplate when released doesn't open very far, in fact just enough to allowed the follower to start out. I thought that's odd, why do that? So loaded 4 rounds in the mag, dropped it, and I think it was by design. When you open the floorplate on many rifles, you can easily end up with your rounds on the ground or in your pants cuffs. This way, you have time to reach down and just push the follower out of the way and your rounds fall into your hand. So if that was the intent, its pretty slick.
Will shoot it again on Monday, unlike so many of the guns I buy, this one might follow me to the hereafter!

It sounds like you got a keeper!
Africa on my mind.

Stunning rifle! I’m happy for you! A very beautiful rifle! A true treasure!

Guys, been shooting this thing now for several weeks and all I can say is no regrets! Its easily the most accurate 7x57 I have owned and quite a few have tip toed thru my hot little fists. Most recently I had bought a very nice Nosler M48 that should have been a real winner.
Alas it was not. It was like so many rifles, a mostly 3 and 1 shooter. Three close and one stray, usually for no reason, just unsocial.
This rifle, and I shot it again today did throw a few flyers to begin with but has really settled in now and with the load I shot today I got 4 sub MOA groups out of 5 and 3 of those were half inch groups, 4 shots at 100, benched. Wish I could have saved the target but it was not to be.

Load today was 150 gr Sierra Game King soft point ahead of IMR4350 from 44-48 grains by full grain. Only group not sub MOA was a first shot out, 2,3, and 4 in half inch. Dont know if the one was me or just because but this thing really shoots.
Have had numerous targets like this one using various components. I am working my way up from the bottom in bullet weights and when I get to 175 I should have a pretty good idea what it prefers.
Its an absolute pleasure to shoot and while expensive, I dont feel like I got hosed at all, well worth it.

You sir have a problem. Once you shoot a firearm of this class it is difficult to go back. Welcome to the addiction! We meet Wednesday nights. Hello, my name is...

This is not the smallest group fired with this rifle, but first target 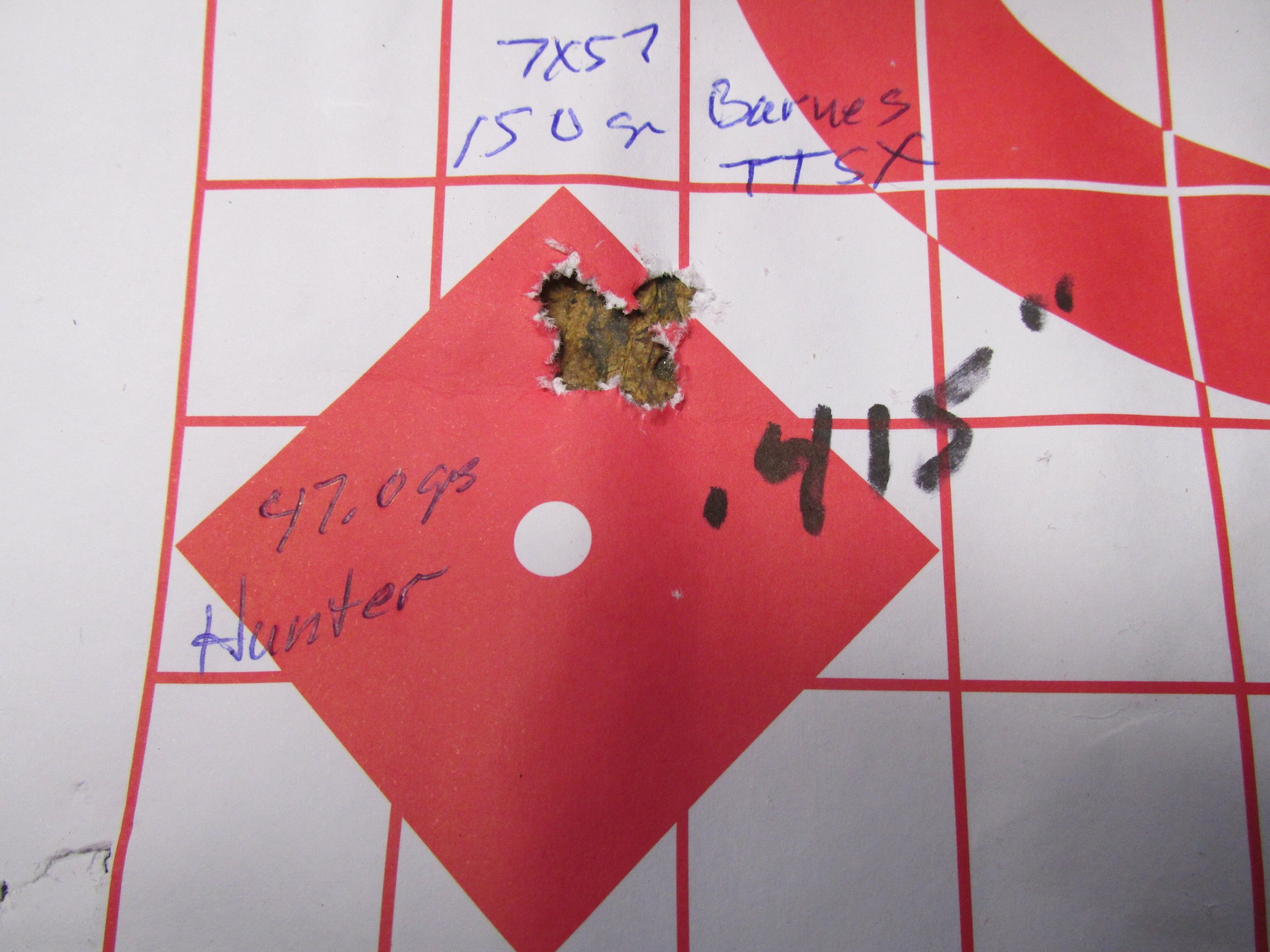 I have been able to snag at the range.
150 gr Barnes TTXX with Hunter powder, 4 shot group. By far the most consistently accurate 7x57 I have ever owned, and I have owned a bunch of them.

This rifle is really sccchhhhwweeeeeeeet!!! My wife hates it when I say that around here,, LOL...
R

You're fortunate not only to have a rifle that is that accurate but also to have a range where you can shoot it. On this side of the mountains the governor still has the range closed (first possible date for opening is May) because he doesn't want us to get sick.

Seriously?!?! I thought youse guys were doing whatever you want over there, King, Pierce and Snohomish counties are the worst I thought. If I lived over there I would find myself a spot in the woods to shoot.

sestoppelman said:
This rifle is really sccchhhhwweeeeeeeet!!! My wife hates it when I say that around here,, LOL...
Click to expand...

One of the grandest rifles in what may be the greatest caliber of all time. Enjoy!
You must log in or register to reply here.

The FFAL index to assess a rifle

K
The Cartridge Which Is Loved By Some, Loathed By Many, But Known By All
9 10 11