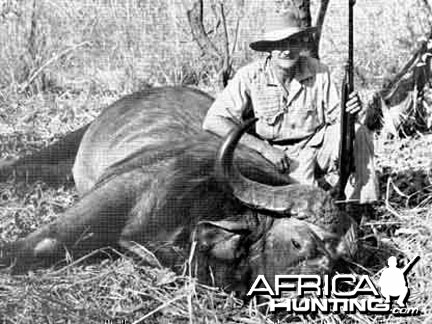 This animal has always been painted blacker than it is as regards its usual behaviour, but when once wounded there is hardly a more dangerous beast, especially if it has to be followed up in thick cover.
Care should be taken, therefore, to put a deadly shot in at first, and there is no better place to shoot than the point of the shoulder if the beast is broadside on.
If facing, and its head is up, shoot at the base of the neck for a raking body shot.
If quarter facing, aim at the side of the neck so that the bullet will get to the opposite shoulder.
The best type of bullet for buffalo would be the dum-dum, that is a bullet with the lead just exposed at the point.
For close quarters, in following a wounded animal, a big bore might be useful, for there is no doubt that once a wounded buffalo has made up its mind to charge, it means business, so it is better to have something in one's hand that will knock it down or knock all the charge out of it, though on ordinary occasions they can be killed easily enough with "303 and "256 rifles.
Solids are also good for buffalo, but we think a bullet with lead just showing the best.
If using a single-loading rifle, load up quickly after each shot, and if a magazine is used be sure there are cartridges in the magazine as a reserve.
If charged it would be easy to escape if a tree was handy, or an ant-hill. In the open, of course, it would not be necessary to go closer than 100 yards, at which distance there would be no difficulty in killing the animal. Wounded animals, however, will seldom be found in the open if there is cover about, unless they are so badly wounded that they are unable to reach it. 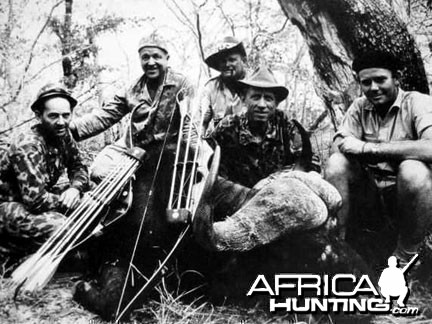 The question of vital shots is a most important one, for, after the game is sighted, it is necessary that the sportsman should know exactly where to hit it, so as to kill it quickly, saving the animal perhaps many days of suffering, and the hunter the time and trouble of following it up.
Nothing is more distressing to the man with humane sporting instincts than to feel that he has sent an animal off with a painful wound to die slowly, tormented by flies, maggots, and the nightly terror it will suffer from lions, hyaenas, jackals, or hunting dogs.
It would be well, then, to shoot coolly, and not to aim at an animal's whole body, but at the exact spot you wish to hit.
Never jerk the rifle off, but press the trigger gently, and, when possible, sit down. When this is impossible, if a tree is handy, rest the rifle against it, taking care to have the arm or hand between the barrel and tree to prevent jump.
It would, perhaps, be better to take the animals in order of size and the difficulty in killing them.
Last edited by a moderator: Dec 1, 2016
Jerome Philippe, Founder of AfricaHunting.com
You must log in or register to reply here.