Interesting morning hunting, we saw a lot of mule deer. I saw a old mule deer buck down by the river that was past his prime. Mule deer season was closed. The old buck ate in the meadow by the river. Most of the mule deer were young bucks, does and fawns. We saw a cow moose and her calf but no bulls this morning. We are going to take a break and hit it again in the afternoon. I asked about calling moose and it can work but it was way too windy this morning to work.
Click to expand...

That should work great. I shot my Idaho Shiras bull with 7mm 175 gr A-Frames. 1 in the boiled room and its dirt nap time
Have fun! I am jealous, Moose are so fun to hunt.

I have been putting in for points for a long time out West. For a long time I was trying to get enough points to hunt the top draw units in the state but I have given up after numerous price increases in preference points and license fees. The area I'm hunting is hard to draw.
Overall I'm trying to reduce my costs for applying for permits in the Western USA. I'm going to try to draw tags and hunt so I'm not giving states a donation every year. Mainly I'm trying to draw sheep, deer, elk and antelope tags.

My perspective on hunting is always changing.....

Interesting morning hunting, we saw a lot of mule deer. I saw a old mule deer buck down by the river that was past his prime. Mule deer season was closed. The old buck ate in the meadow by the river. Most of the mule deer were young bucks, does and fawns. We saw a cow moose and her calf but no bulls this morning. We are going to take a break and hit it again in the afternoon. I asked about calling moose and it can work but it was way too windy this morning to work.
Click to expand...

Your 7mm will be perfect for any moose you shoot with it. I've shot 9 moose with my 7mm Rem Mag and 2 with my .308, all quick one shot kills. Moose are big and strong, but they aren't very tough!
"I don't need to shoot farther...I need to hunt closer." - G. Sitton

Excited for a great shiras on the ground! Good luck!
Africa on my mind.

Congratulations on drawing the tag. and best of luck on your hunt, I hope the experience is so fantastic and you get one so big you have to spend the money mounting it

Speaking of acting silly with a Moose.

Well I had a successful afternoon. I was taking a nap and got a phone call saying a local had found a bull down by the river bottom and he was bedded with a cow and calf. We got in the truck and headed over there. It was an old bull with a part of his paddle broken off and his brow points broken off on the other side. I looked him over through the spotting scope and decided to go after him. At this time of the year, every bull is broken up. I wonder what the other bull looked like? My rule of thumb is don't pass on the first day what you would gladly take on the last. So we went down the ridge and got as close as we could. I was at 220 yds and got on the Bog Pod Shooting Sticks. We tried calling to get the bull to stand and only the calf and cow would stand. The bull would give us a look and continue chewing his cud. We were sitting in the sun and wind. Finally my guide hooted and hollered and the bull stood broadside. I hit him perfectly in the lungs, he took a step I fire again and he dropped. We walked up on him ready to shoot and had to walk across a creek. The bull was dead and had chunky blood coming out his mouth. It was the right bull to take! Grand old bull moose down. Now the fun part starts, cutting up moose and back packing it to the road! 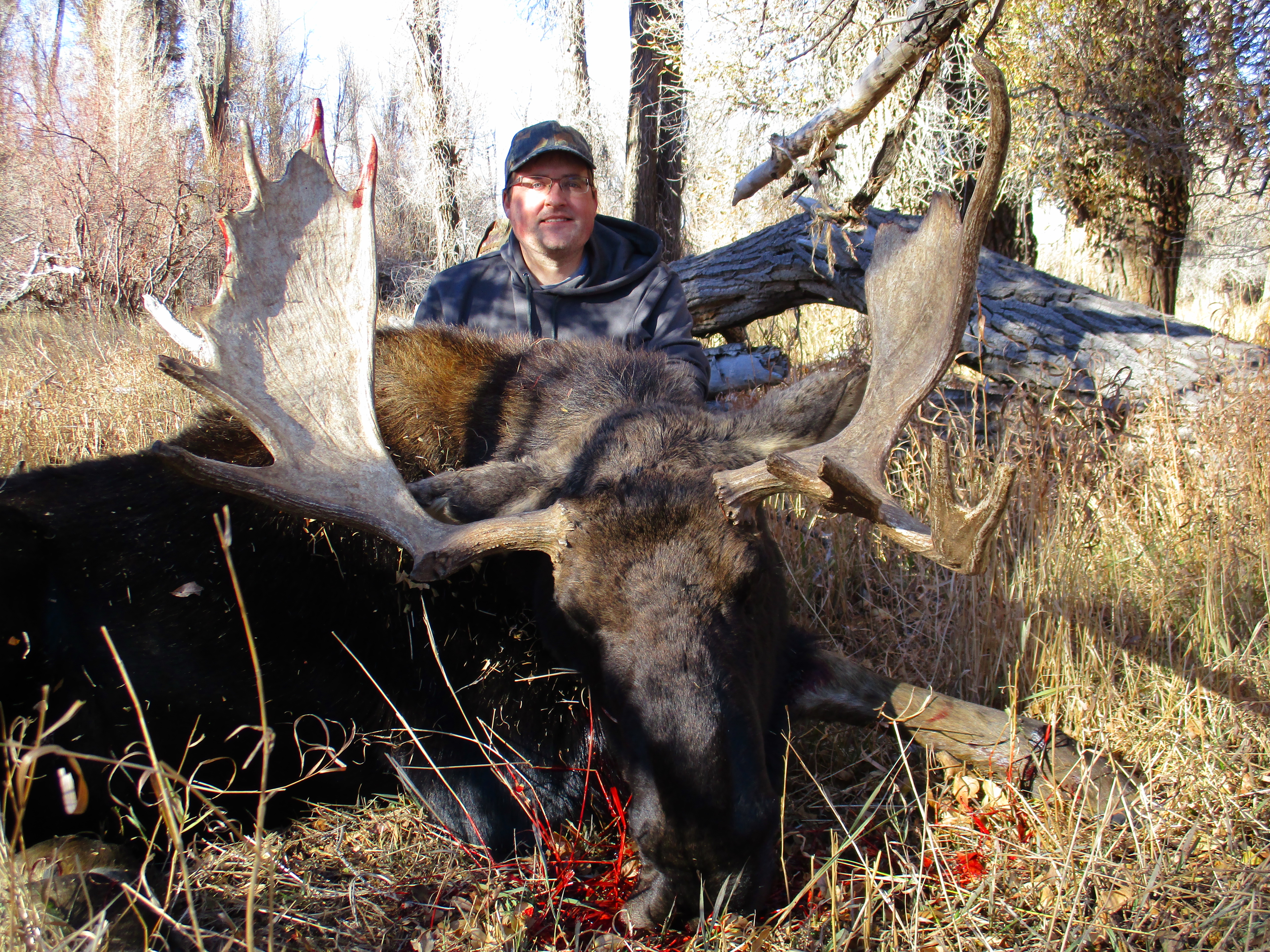 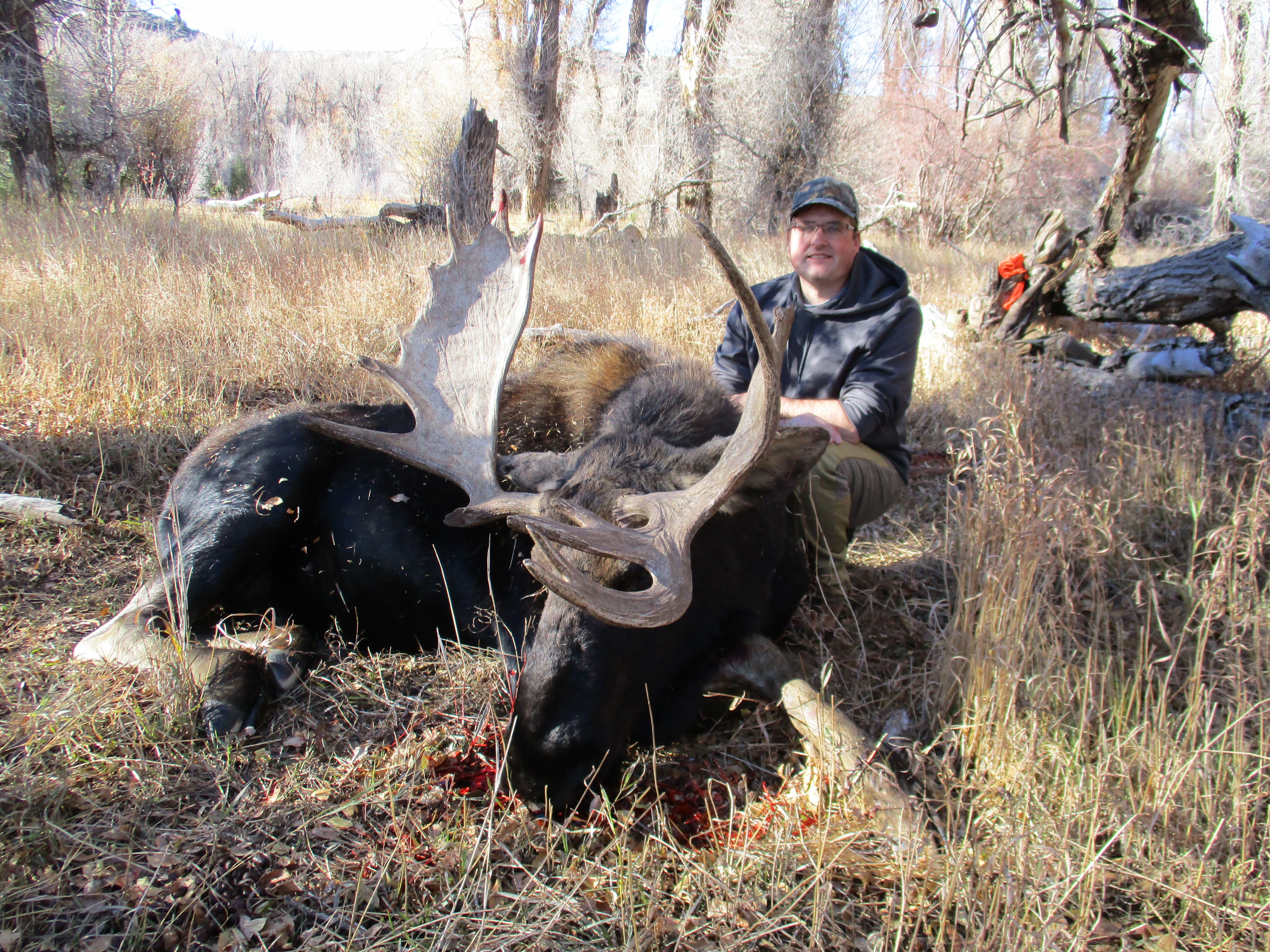 Congratulations! That should fill the freezer.

Well done. Good choice on a warrior like that.
Congratulations.

Great stuff, nice bull with a lot of character! Congrats!!

I don't know if you've already made your decision on taxidermy, but here's my unsolicited thoughts. I did a shoulder mount of my Shiras......it's freaking huge. It looks great, but it takes a somewhat unique space to mount it on the wall with the amount of space required. I sometimes wonder if I wouldn't have been happier with a skull mount. If I had to do it all over again, not sure which direction I'd go. But if I went in the skull mount direction, I'd have one of those places that will bronze the skull do that for me. I think those mounts really look good.

Congratulations on a great looking moose.
And here I am, returning to Africa of many faces;.... the sloe-eyed temptress with flowers in her hair who stole my youth and my heart, and left me an old man with a kaleidoscope of conflicting memories of many dashed hopes and some fulfilled dreams. E. Echols
You must log in or register to reply here.