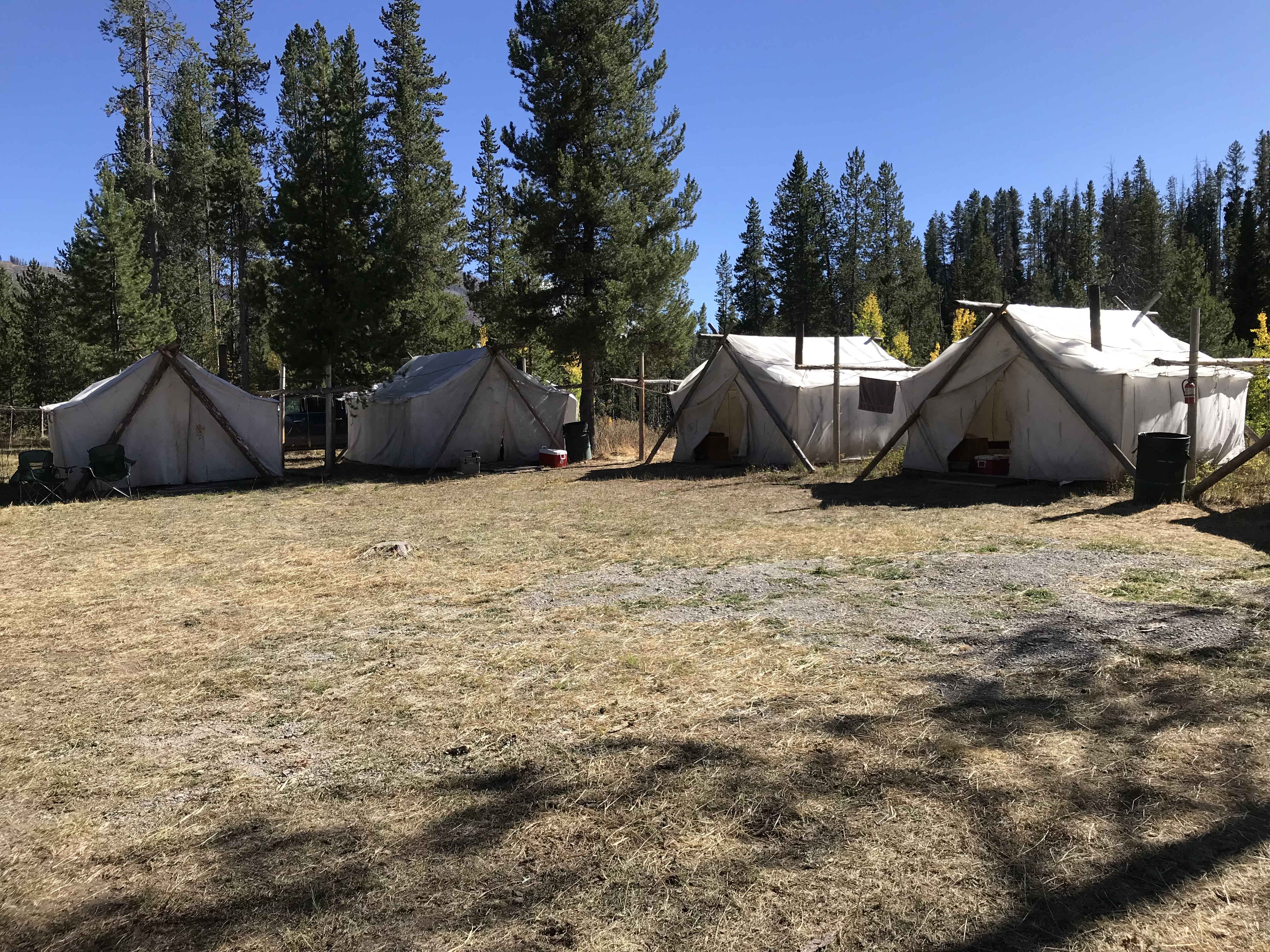 Quite an adventure already for both you and the guide just getting to the hunting camp. Looking forward to the rest of the report.

Keep it coming, UR bringing back lots of memories

for the record turrets and scabbards probably not too compatible. I’m sure this report gets more productive. Cheers

The pic shows part of camp. Nights were interesting. Mice move in under the tents. So at night when the generator goes off you hear them moving around .
Day 3 I kinda felt was wasted. Bob was so sure that there was a good bull in the creek canyon above camp he decided we would walk it. So as daylight broke we left camp on foot. Working along the hillside above the creek got difficult quickly. Eventually Bob and Ben went down to the creek while Spencer and I headed up to the trail. Brian stayed in camp to rest his feet. We made it less than a mile from camp before giving up and heading back to camp.
When we hit the trailhead the game warden pulled up. He checked my license and talked about a new fire that we had seen the day before.
Apparently a woodcutter taking a break in a lawn chair dropped a cigarette. By the time he saw it the fire way out of hand. In describing the man and vehicle our group determined it was the fellow that was to supply wood to our camp. He apparently was apprehended the next day......
Waited in camp and no Maryann so we assumed she had gotten out of jury duty for that week. Late aftn Brian and I took a 6 mile ride. Bob went to town and Ben was with him. Looked over a lot of willow filled creek bottoms. No moose. Brian got a glimpse of what may of been a shooter deer but he didn’t hang around.
While in camp that day I got to see a big buck one of the other hunters had gotten the night before. They were hunting 2X1. First day one fellow got a nice buck that green scored 174. 2nd night the other fellow got a bigger one. Green scored 204! 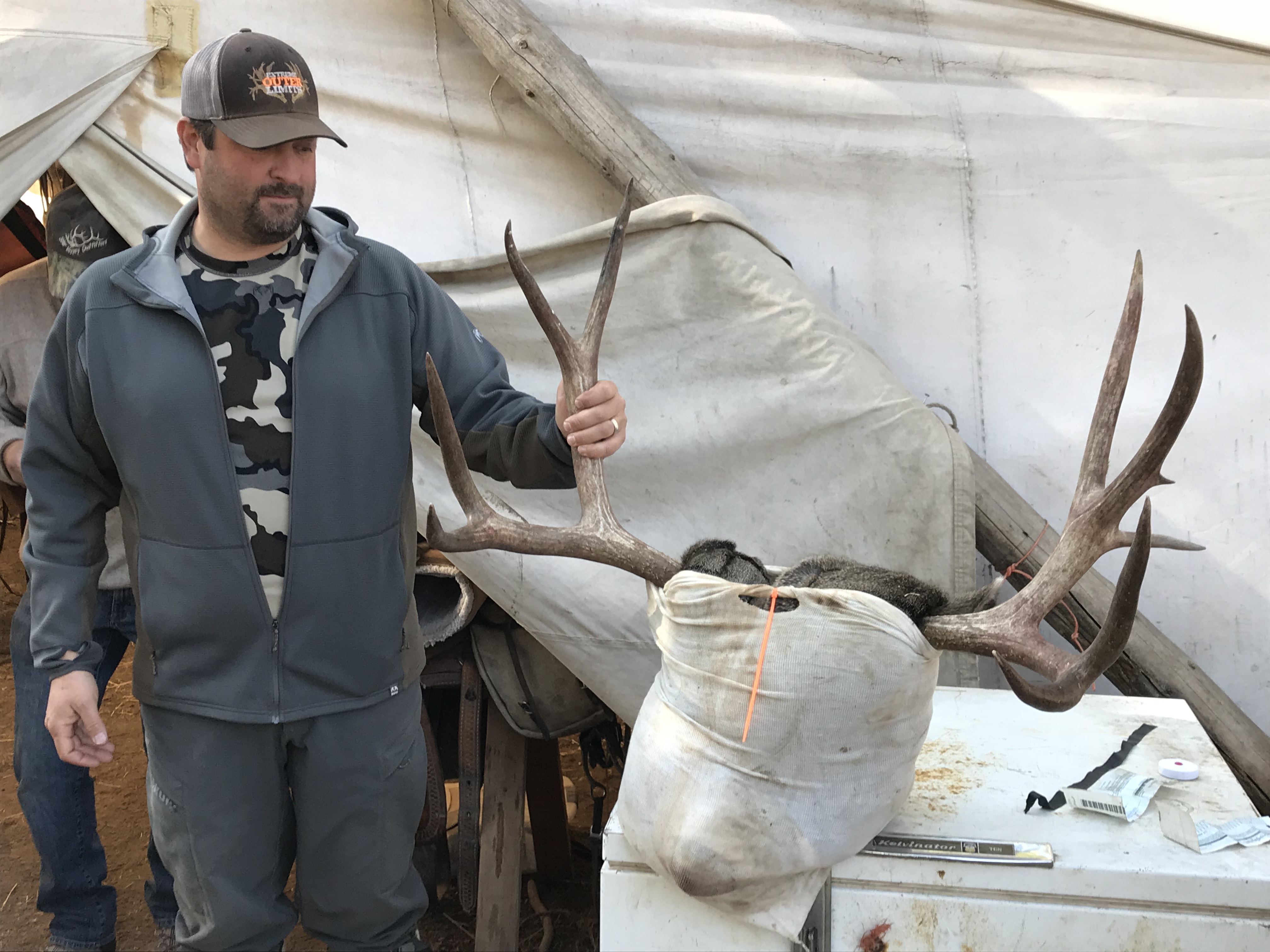 Stud of a deer with a outside spread of 32 inches! The bad part was the hunter was loaded down with meat. Tried to get on his horse and went all the way over. SS he hit the ground he impaled his leg on a stick..... Went in 3-4 inches. They wrapped it up and took 2 hrs getting to camp . Then to the ER in Jackson. Back and in bed at 3:30. Bet he remembers that deer.
Loved the scenery. Leaves were just turning color. I’ll add a cpl pics showing some of the areas we were hunting. 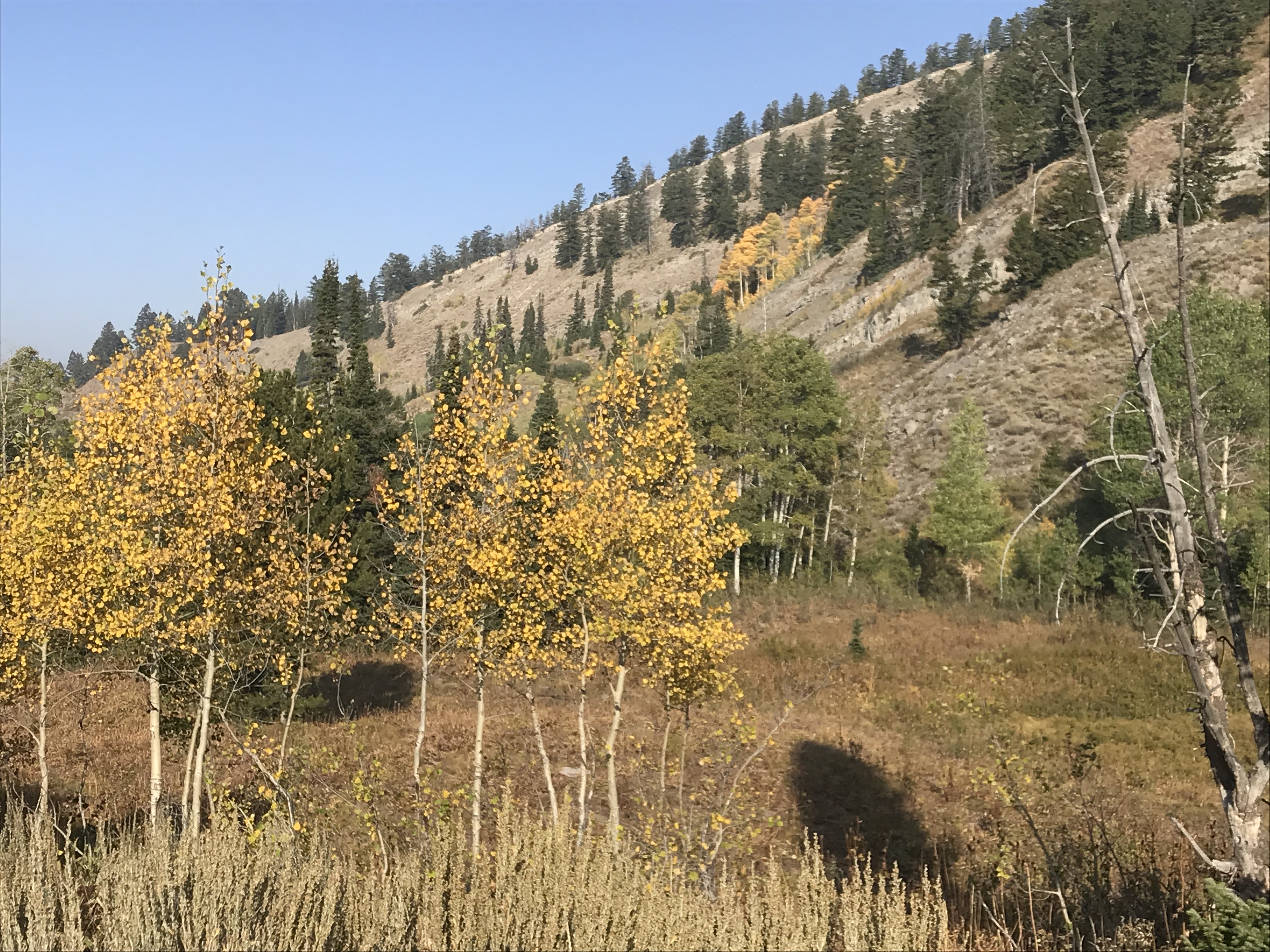 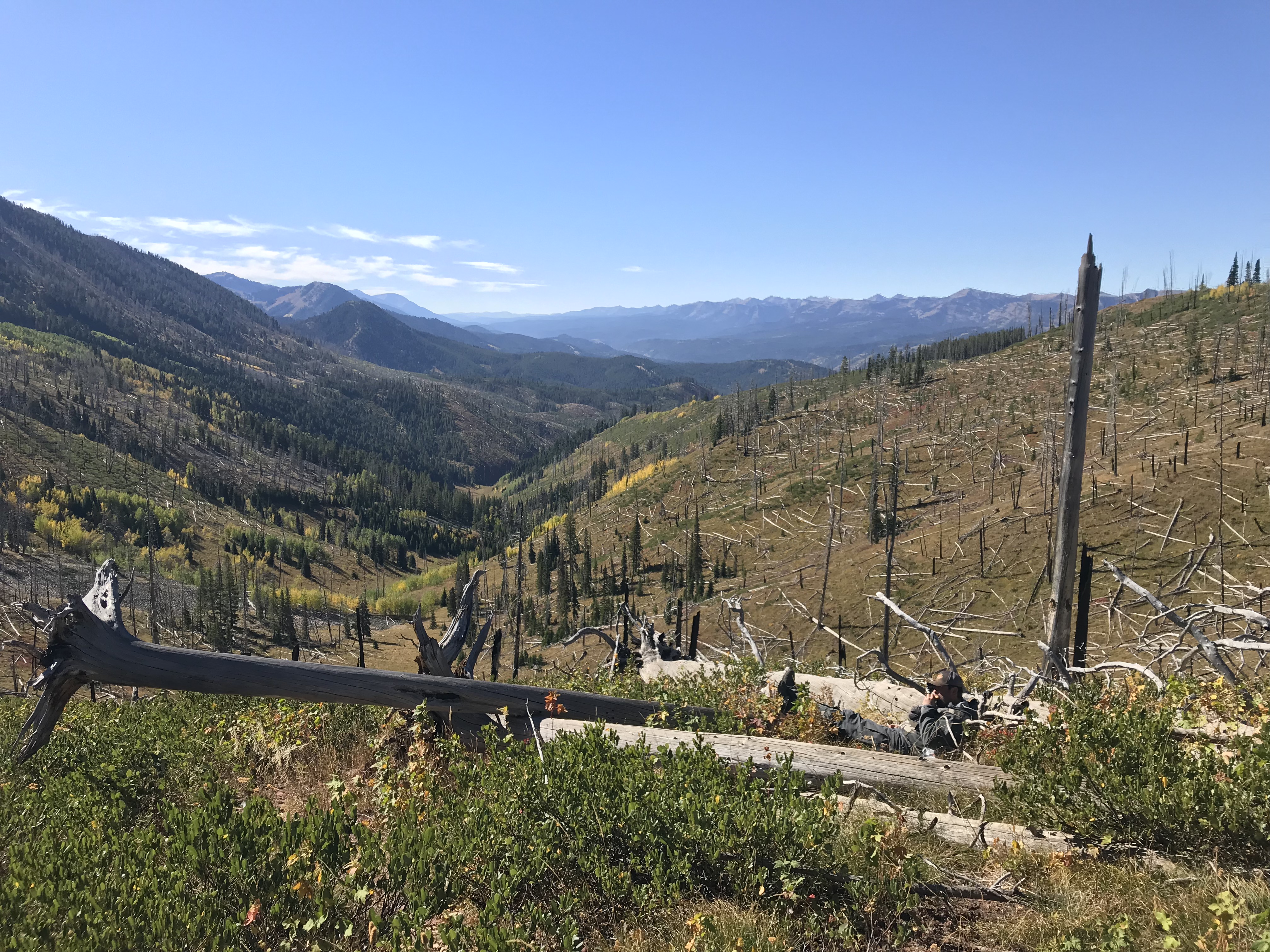 The first 2 days I was on a horse named Chalupa. Rode her the first 2 days then I was on Apricot. Horses like people are different. Chalupa didn’t want to be left behind. She wanted to have her nose right in the tail of the horse ahead of her. So I had to hold her back some. She still got kicked a cpl times for being too close. She also cut right turns a little close at times catching yourleg or foot on trees or branches. Also she rarely drank.
For days 3-5 I had Apricot. Bigger horse. Saddle pommel was over my head . Made getting on a bit more interesting. Before I knew her name I had named her molasses in my mind. Never saw a horse so slow and careful on rocks... she would go slower than the lead horse and then trot to catch up. Annoying whe your backside is fresh. It just hurts at the end of the day... She disliked a horse behind her. I quickly figured out that a horse close behind her pushed her lots faster. She was also badly out of shape. She quit 3 times on hills and started to back down. That can turn into a rodeo that I don’t need.
So one of the hunters and guide saw a big bull moose in the dark. So day 4 finds us trying to find him. They had seen him about 1/4 mile from where we had seen the 5 moose on day 1. This is an old burn. The area pictured above. There are sections on new pine tree growth that is very thick. Smoke from 2 large fires had begun to be an issue. Especially in the mournings. It would hang in the valleys and greatly reduce the distance you could glass. 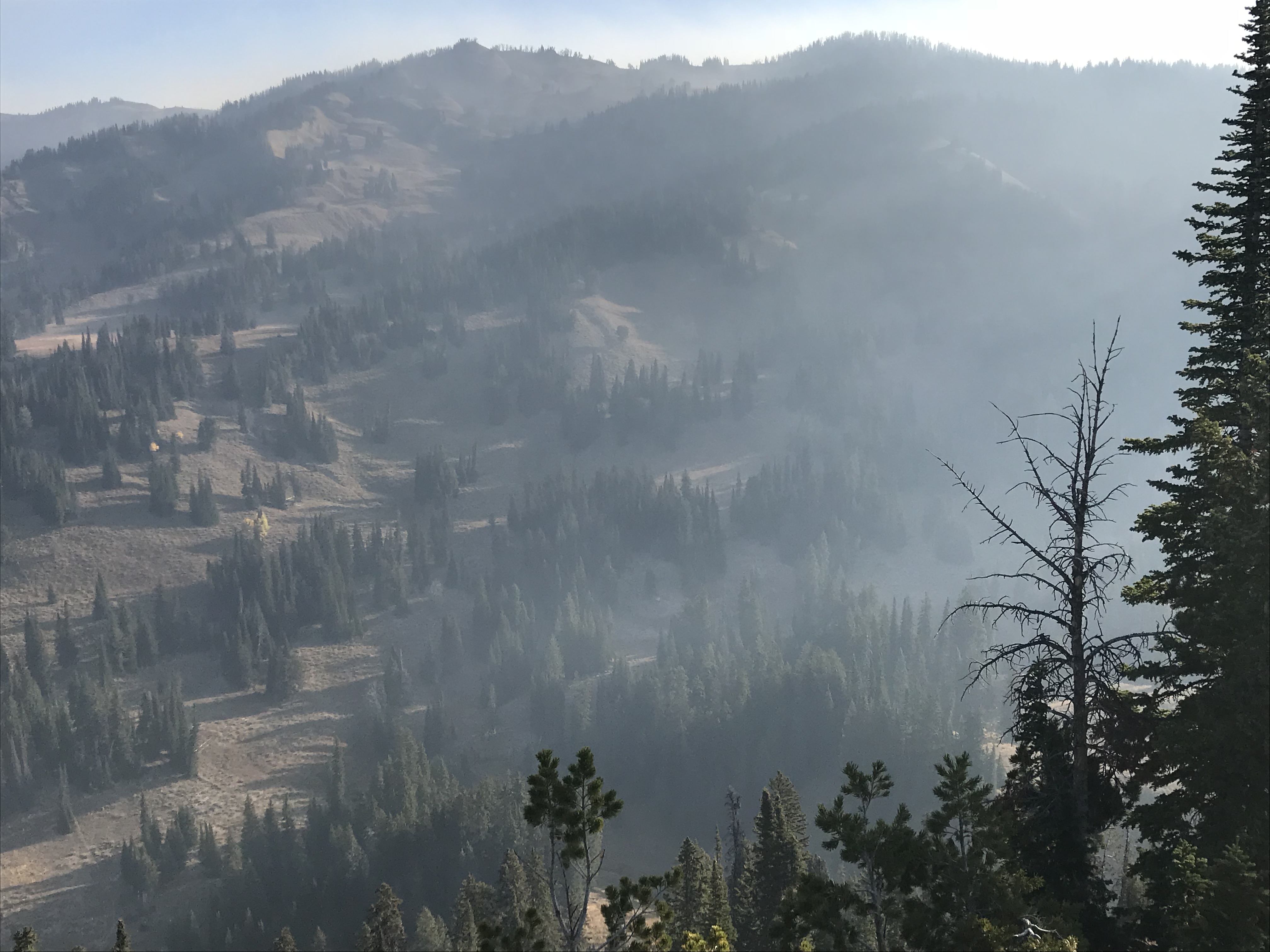 We found 3 moose where there had been 5 before. Only one very small bull. After a couple of hours of careful looking around no big bull was anywhere to be found. Bob asked if I wanted to try a walk down a small creek that fed into the main one that went by camp. I said yes so Spencer, Ben and I headed out. The old burn had lots of down timber. Not easy walking. When we hit the old growth we had some areas that were better and some backtracking from areas that were worse. No moose. No animals at all.
So back to camp around 10:30. At 4 we saddled up to hunt an area near camp. There had been 2 moose work their way across the hillside above camp. Each as single cows. We headed back up into the timber for a look around. Elk and a couple of doe deer. On the ride out it was pretty dark. We were breaking trail through the brush when suddenly Brian stopped his horse and doubled over in pain. It took a bit before he could tell us what happened. He saw a log and tipped his foot back to clear it. The horse lurched down at the wrong moment and his toe caught on the log! The seam of the shoe caught and the horses forward pace forced his toe back. Excruciating pain from his earlier injury. This was a tough time to re-aggregate his foot injury. Thus ends day 4. I spoke to Bob and Brian that night. We weren’t seeing moose so let’s focus on deer the last day. Bob had already suggested I come back in October for the moose when it cooled and hopefully had some snow to track. More to follow.

Excellent report very similar to what typically goes on in elk hunting camp. If luck is on your side, it can happen at any moment that the right animal shows. If luck isn’t on your side, you may never see any animal.
Anxiously waiting on the next episode!
Africa on my mind.

Exciting to hear your hunting report! I would love one of those high country mule deer. I will be in Wyoming hunting moose the third week of October. I got my fingers crossed that we find a nice one!

That's great news enysse. Hope you get a big one. Which unit?
I'll finish up this tale later today.
Bruce

This is the heart where so many elk were hanging out 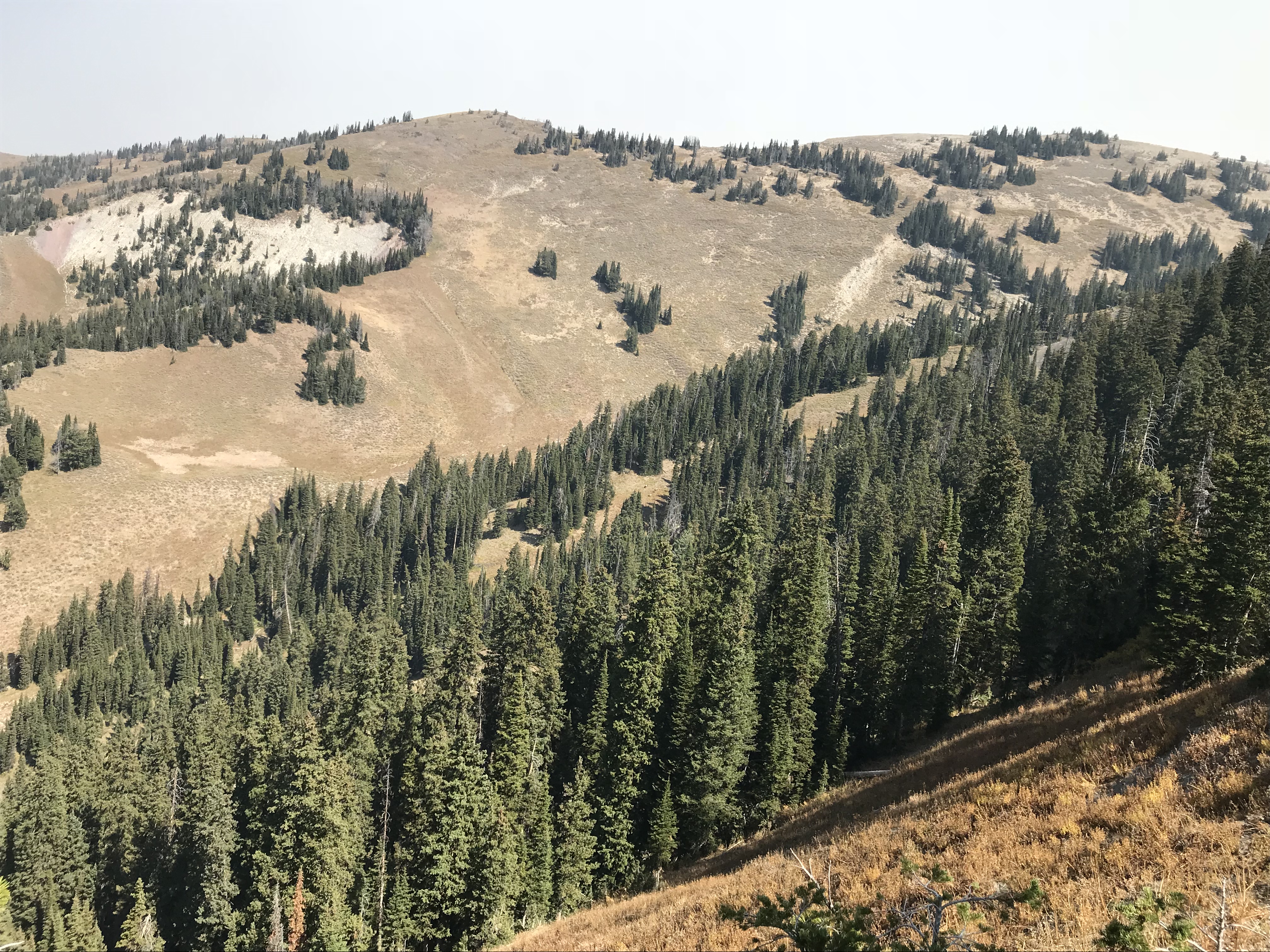 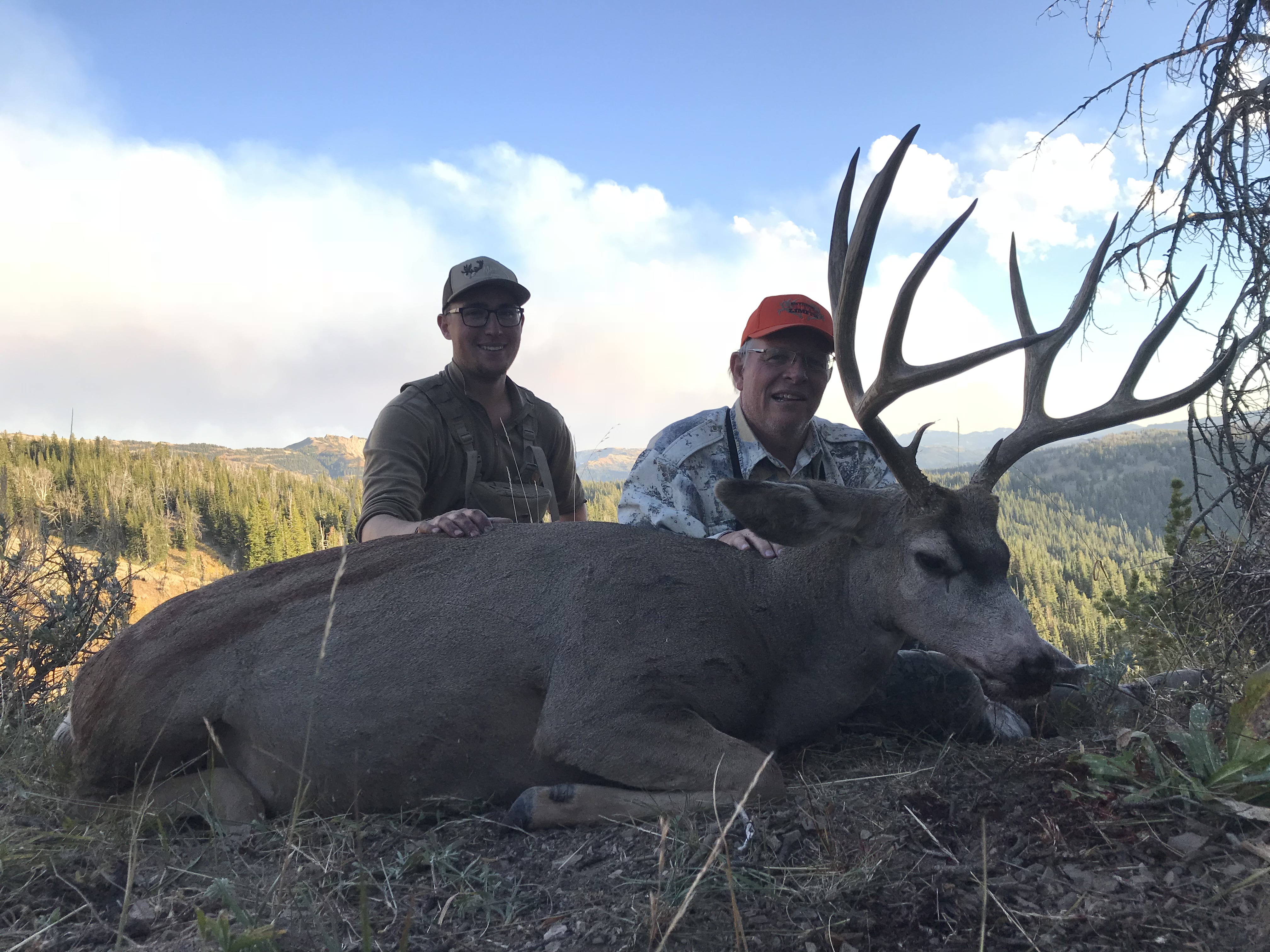 Ben the camerman with me and my buck.

Parting thoughts.... This is a great place to hunt deer as well as elk. Its a wilderness experience. For deer I'd suggest either the first or last 5 day hunt that they have. Elk I'm not sure, but later may be better for a rifle. For a bow anytime in the 15-24th should hit the rut. Food, facilities, livestock and camp are all very good.
Bruce

A great hunt and a great report. Thanks for sharing. Good luck on your hunt later this year.

What a great hunt. That is awesome country!

Great buck and wish you Success in October. I was going to contact you last time I flew into Gillette to see if you would like to have supper and lie about some hunting but I got tied up down in New Castle longer than expected.
"Montana seems to be what a small boy would think Texas is like from hearing Texans" John Steinbeck

How grand! Congratulations on a fine muledeer! And best of luck in October for elk!
Africa on my mind.
You must log in or register to reply here.