Well, as a few of you will have seen in another thread, thanks for the kindness of a forum member on here an Englishman was able to cross the pond for his first ever hunt in North America.

I drove up from Denver to meet up with the motley crew who I would be staying and hunting with for the week. We all hit it off from the start and there was none stop jokes and laughing. I even tried teaching them a little culture, such as the correct way to eat with a fork but it was lost on this lot! They did there best to ‘Americanise’ me too.

We went out for a little drive about on the first afternoon just to get a feel for the land. We had around 100,000 acres to hunt on. We saw lots of Antelope and Mule deer. The terrain is like nothing we have in England. 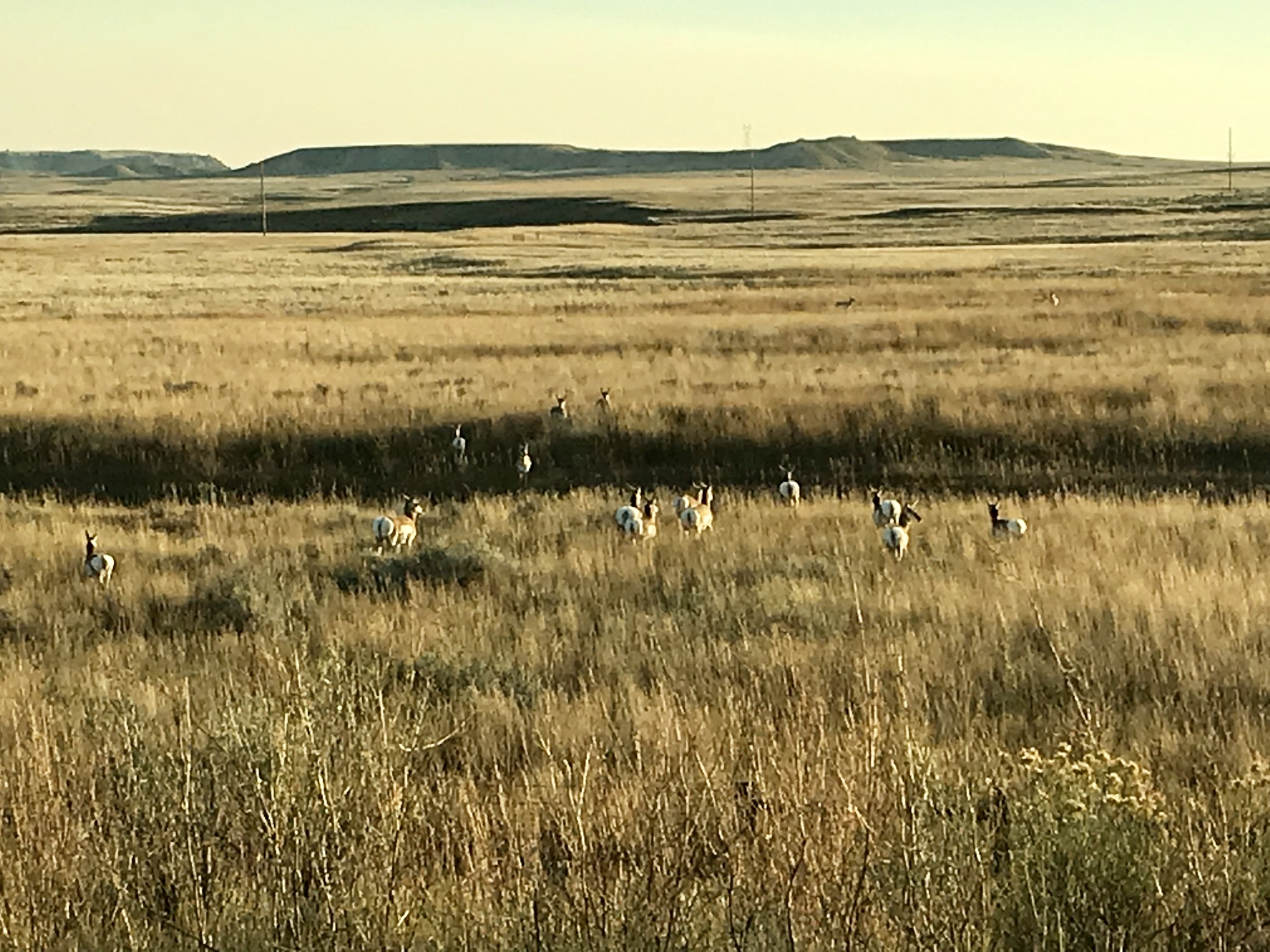 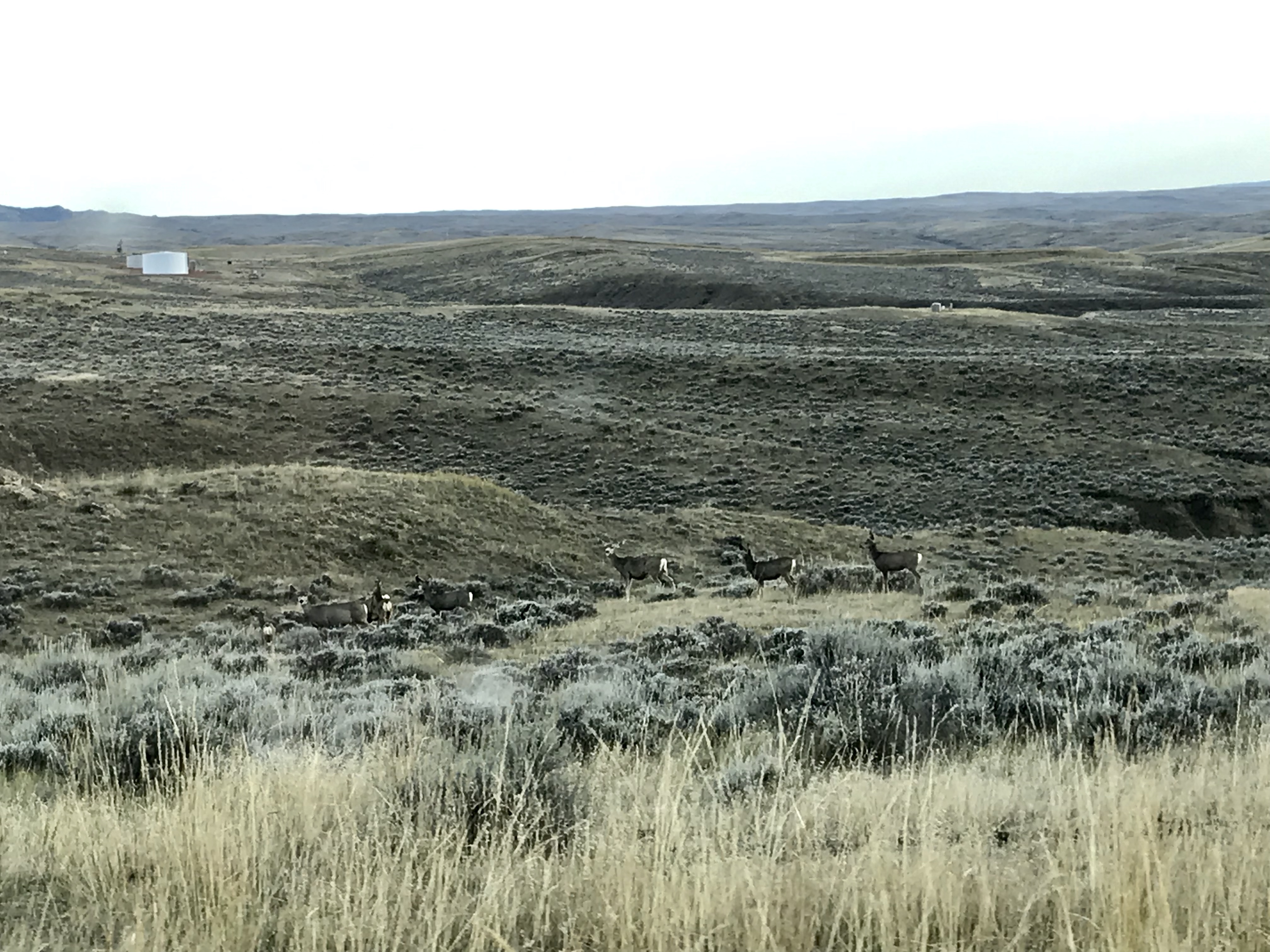 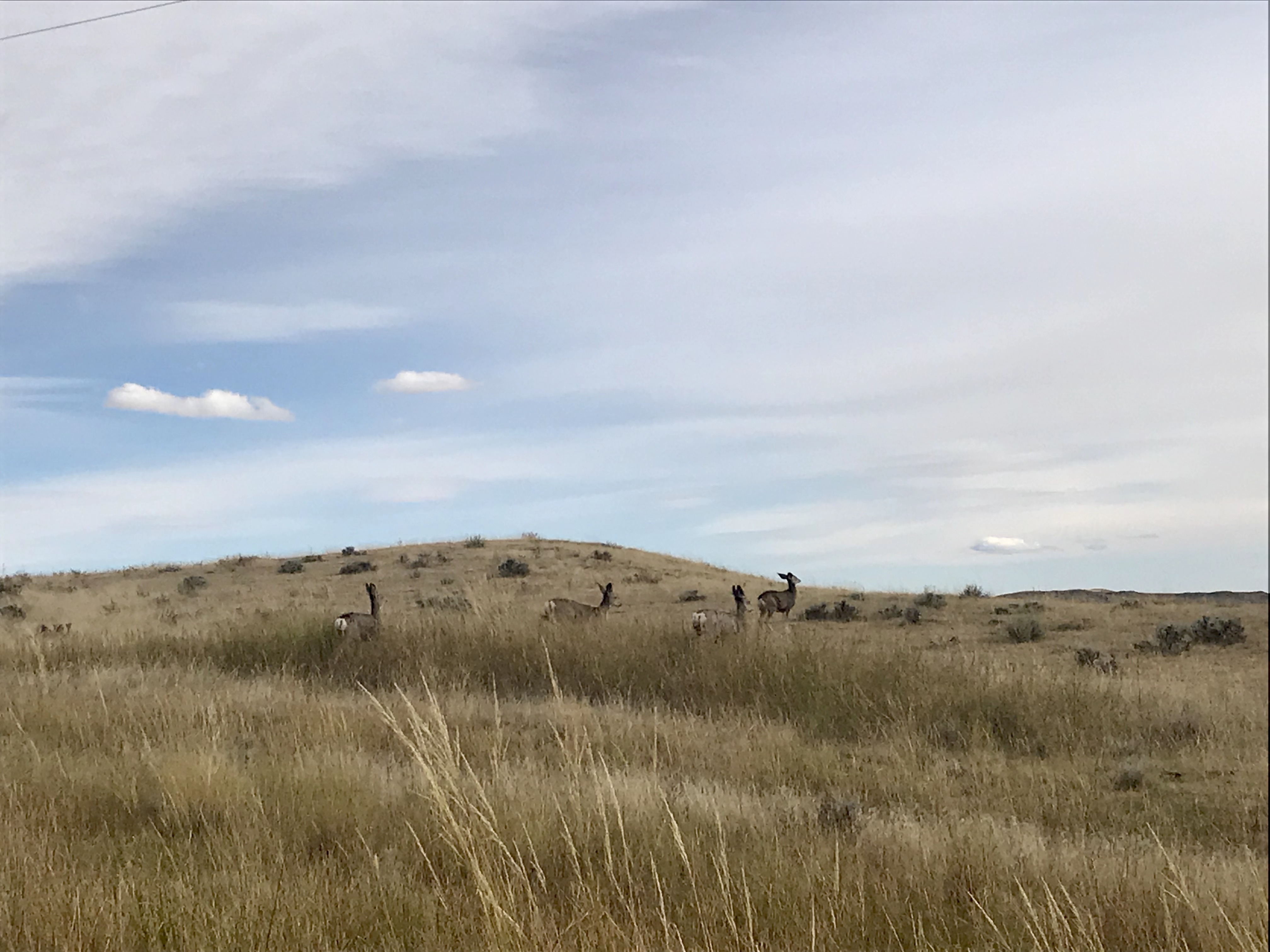 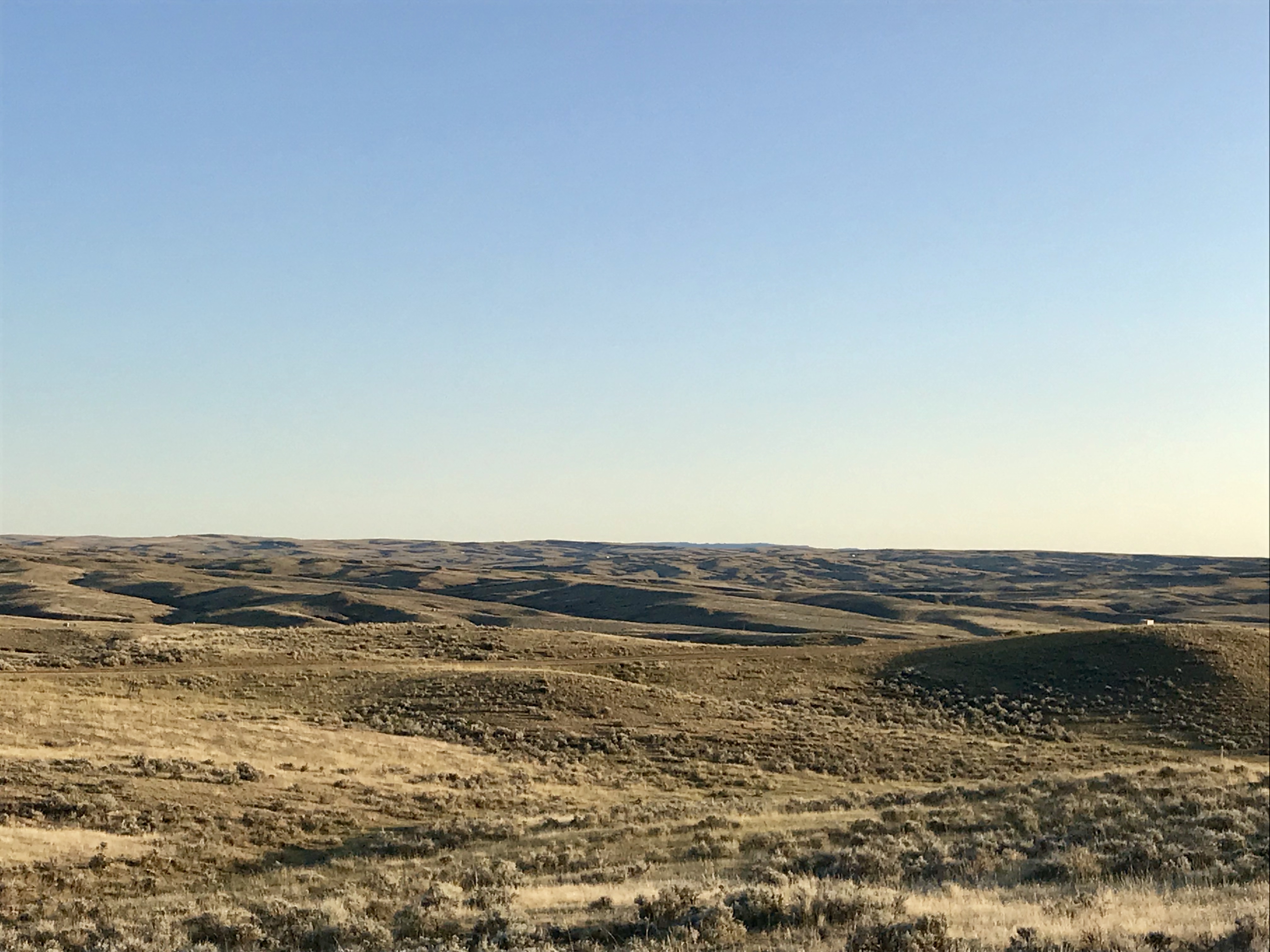 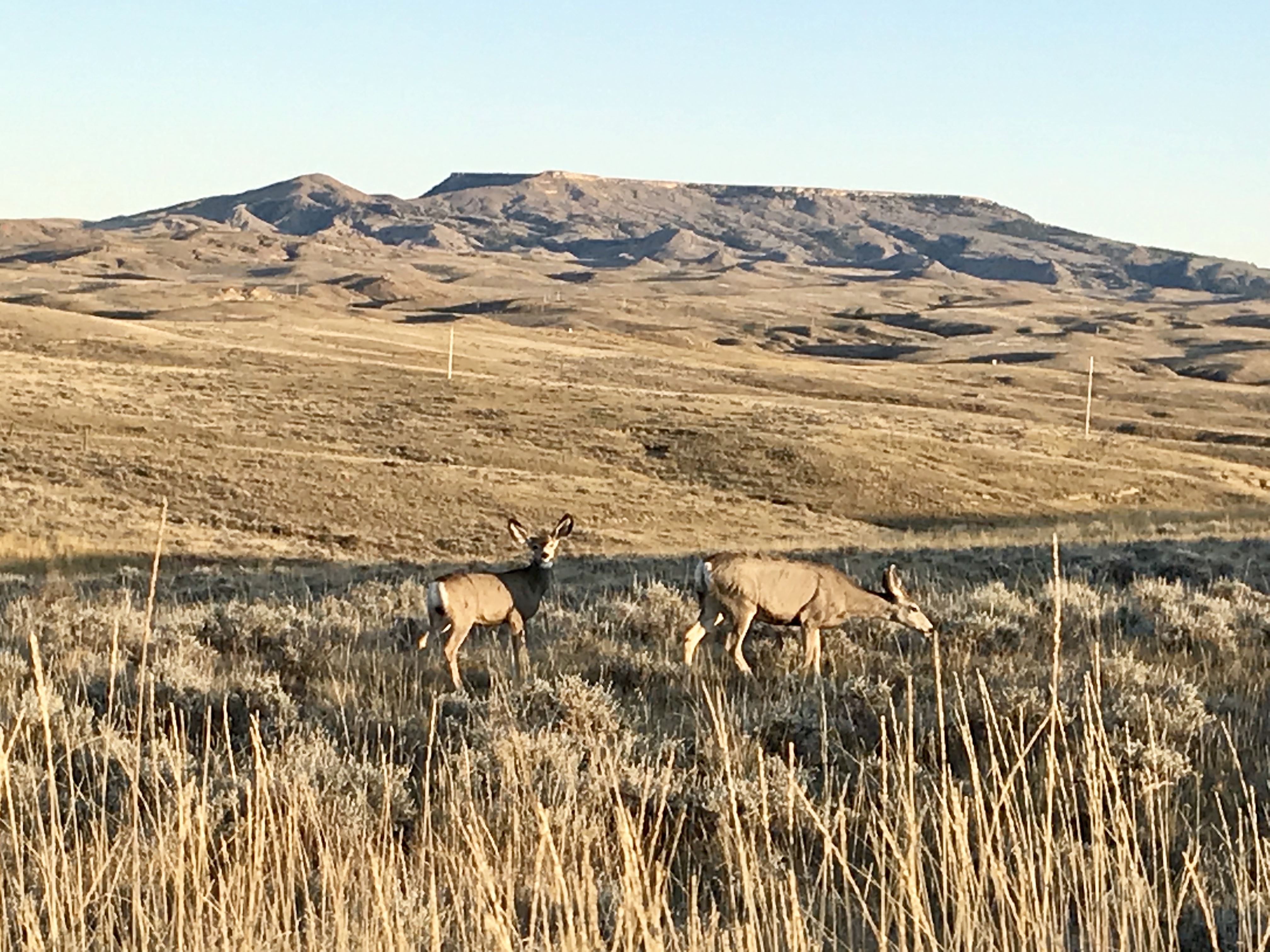 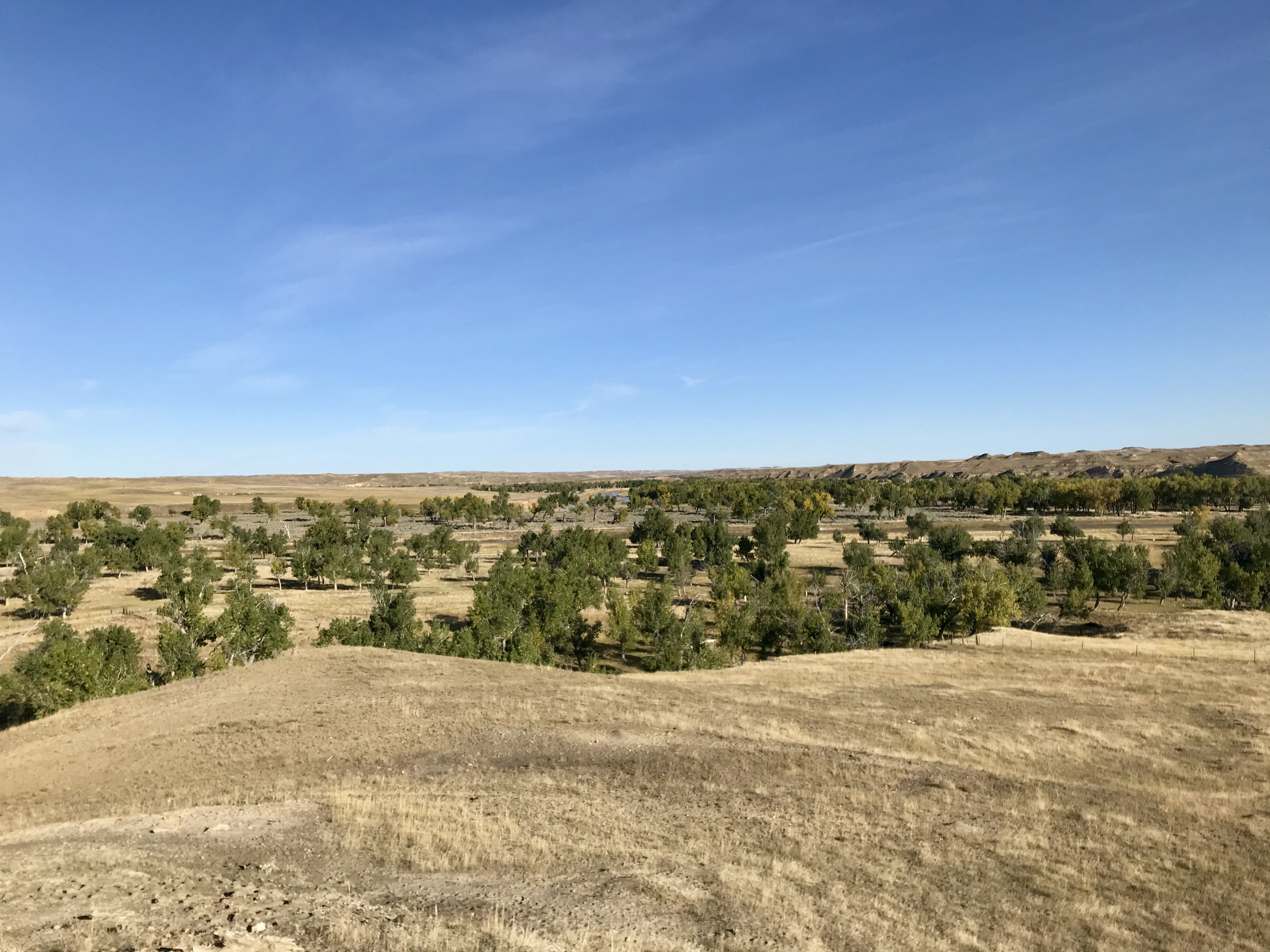 I managed to fill my antelope tag early on with a really nice buck. We looked quite a few over which all looked big to me but my host kept me on the straight and narrow.

I missed the first buck I shot at - we will blame that on the jet lag... then after a few minutes of us standing there watching them disappear over the horizon and trying to work out what happened. This guy and 2 other bucks walked out in front of us. 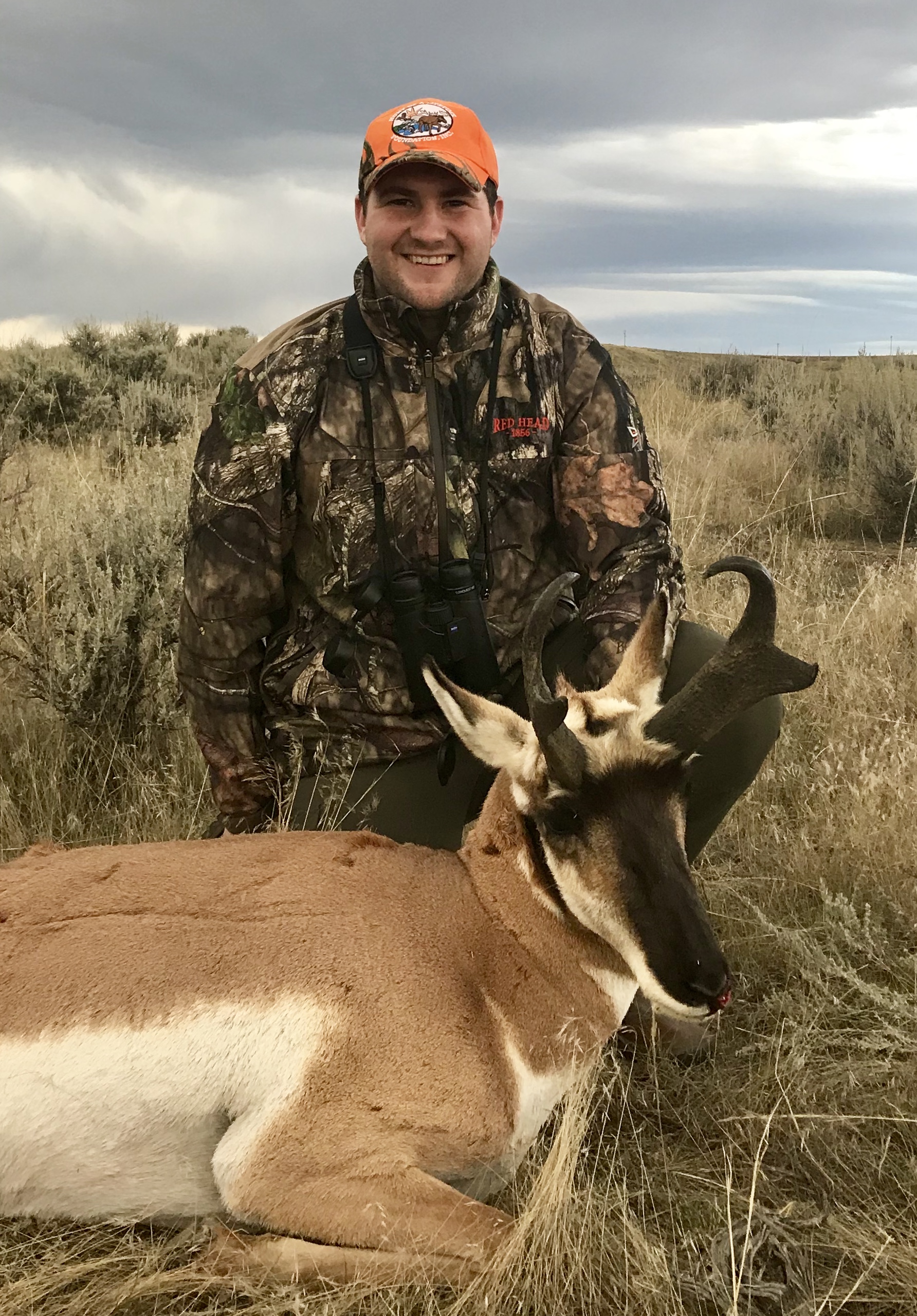 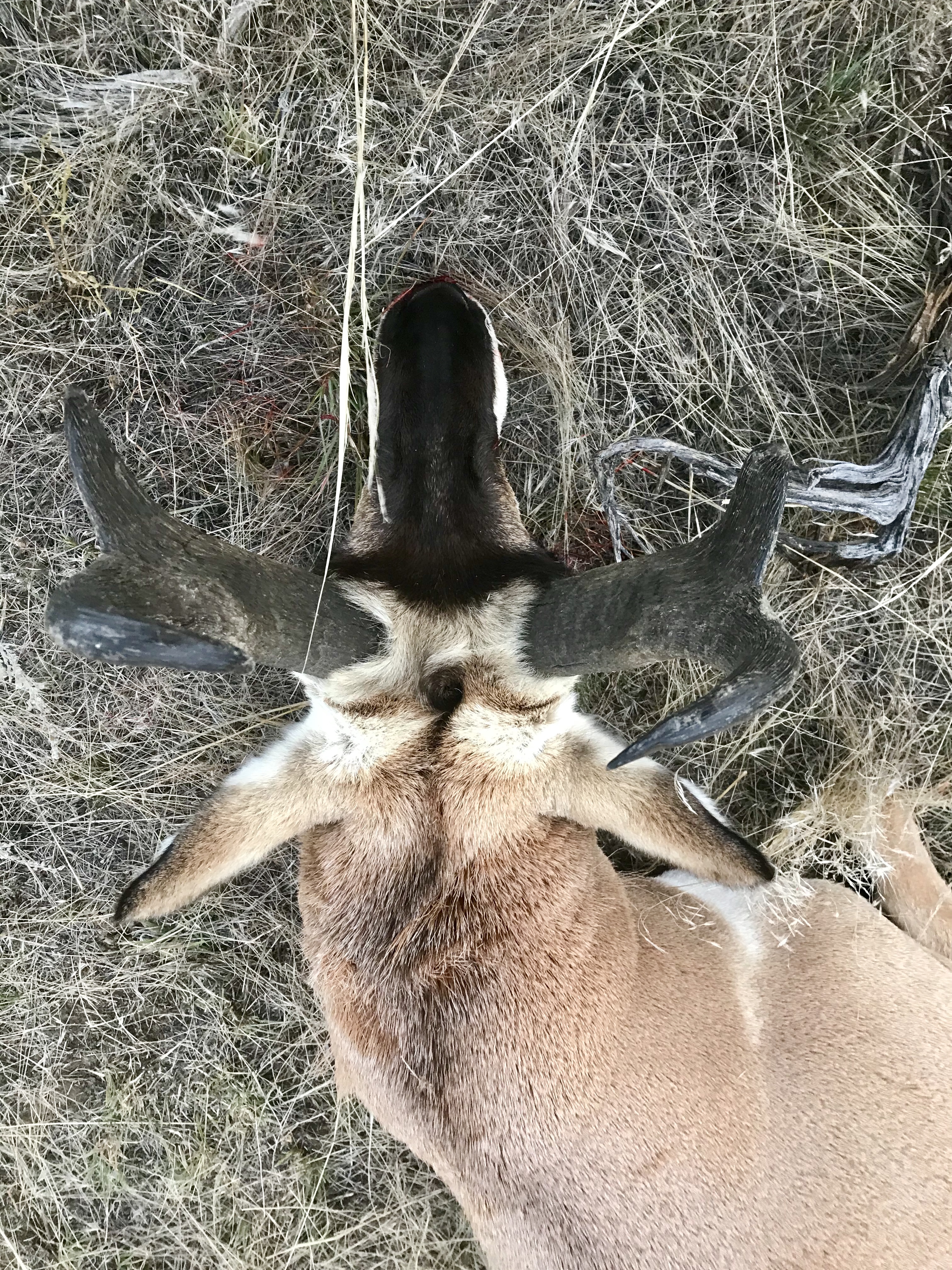 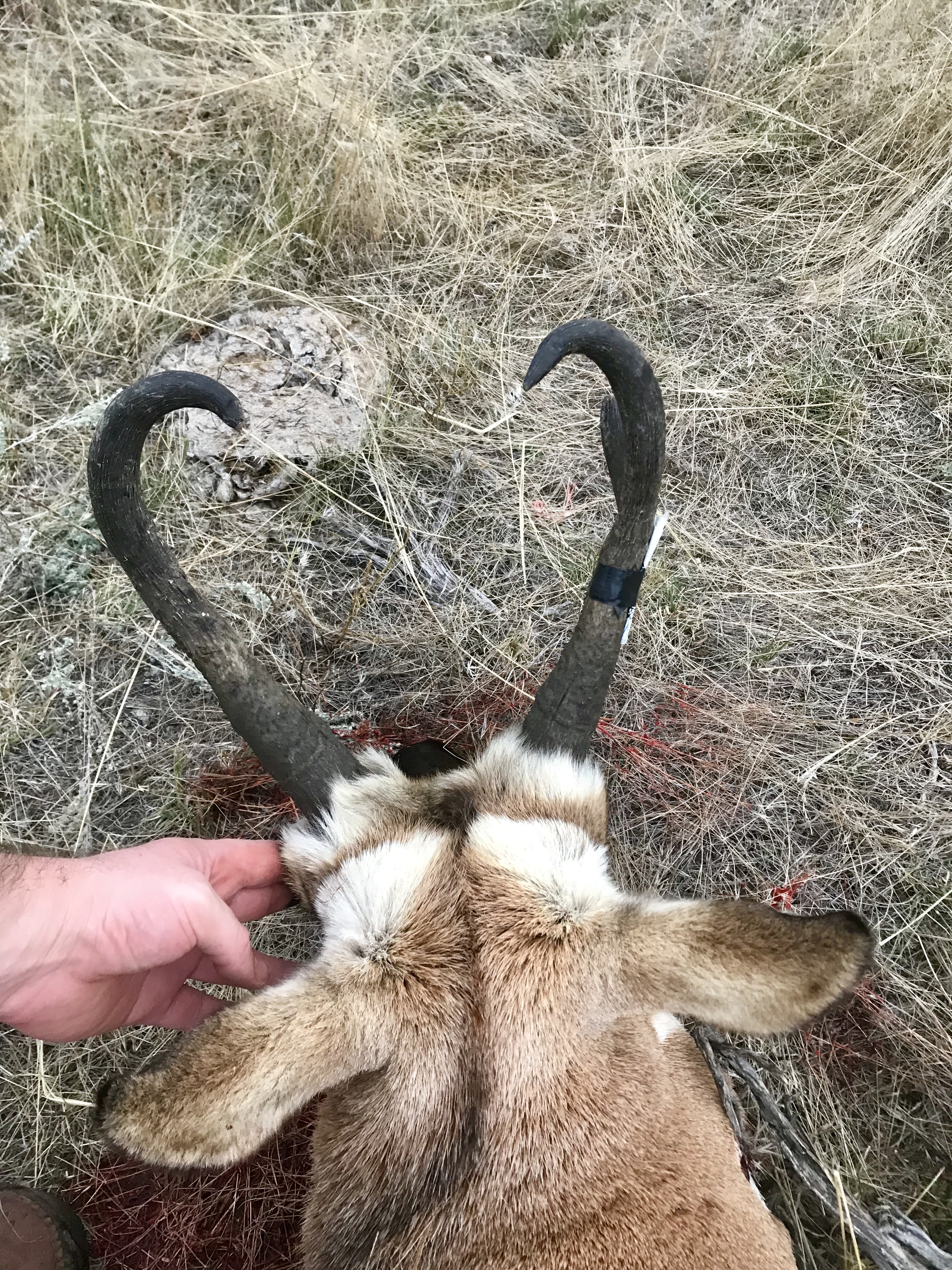 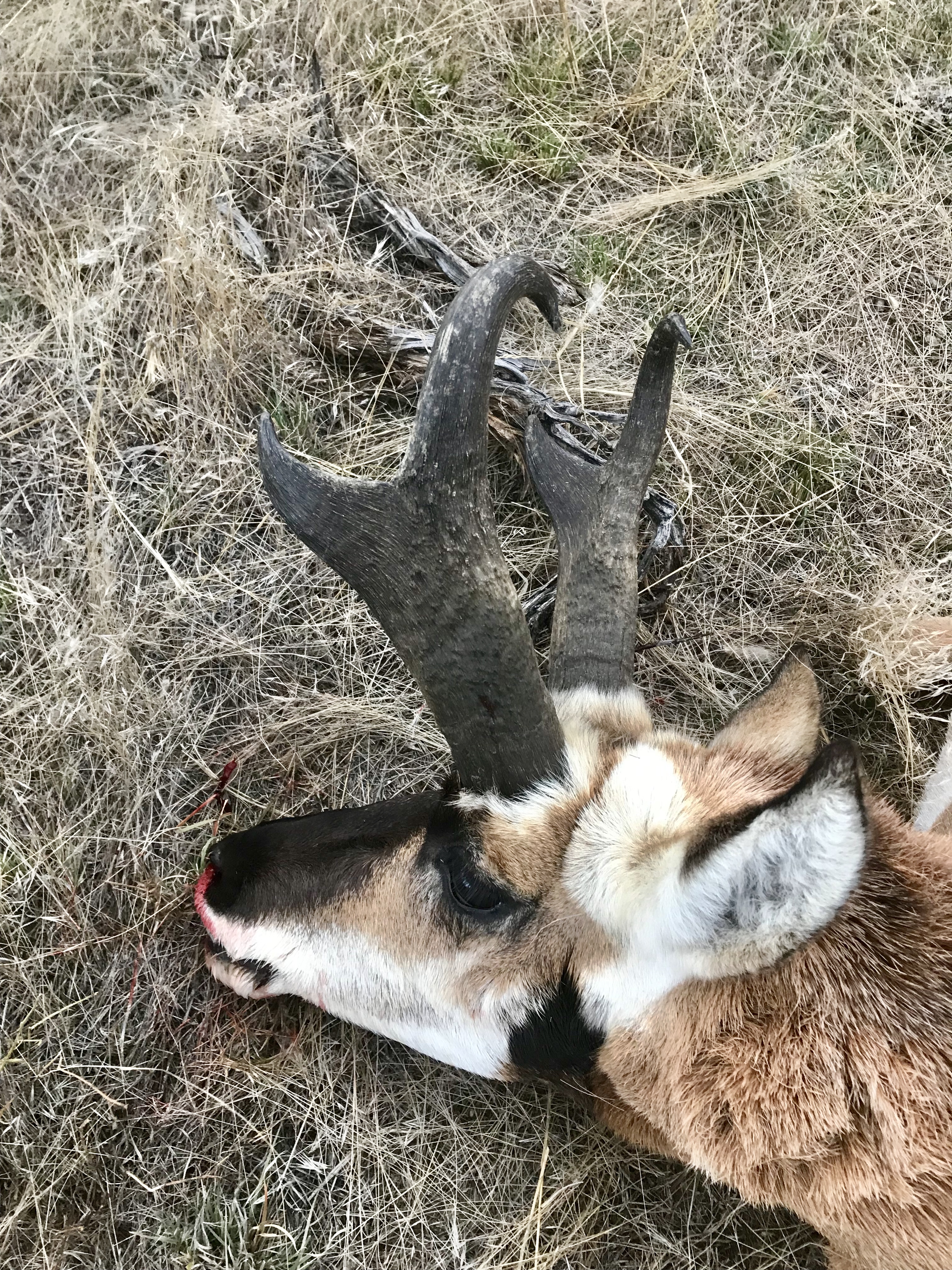 I will let my host tell his parts to the story but another antelope was shot that day too, and a really nice one at that!

That night we were hit with a big storm, 3” of rain must have fallen. So, no hunting in the morning as the place had turned into a swamp and as we had the days we didn’t need to push things. We hatched a plan for the afternoon and it was us stalking down a gulley which was known to hold bucks. 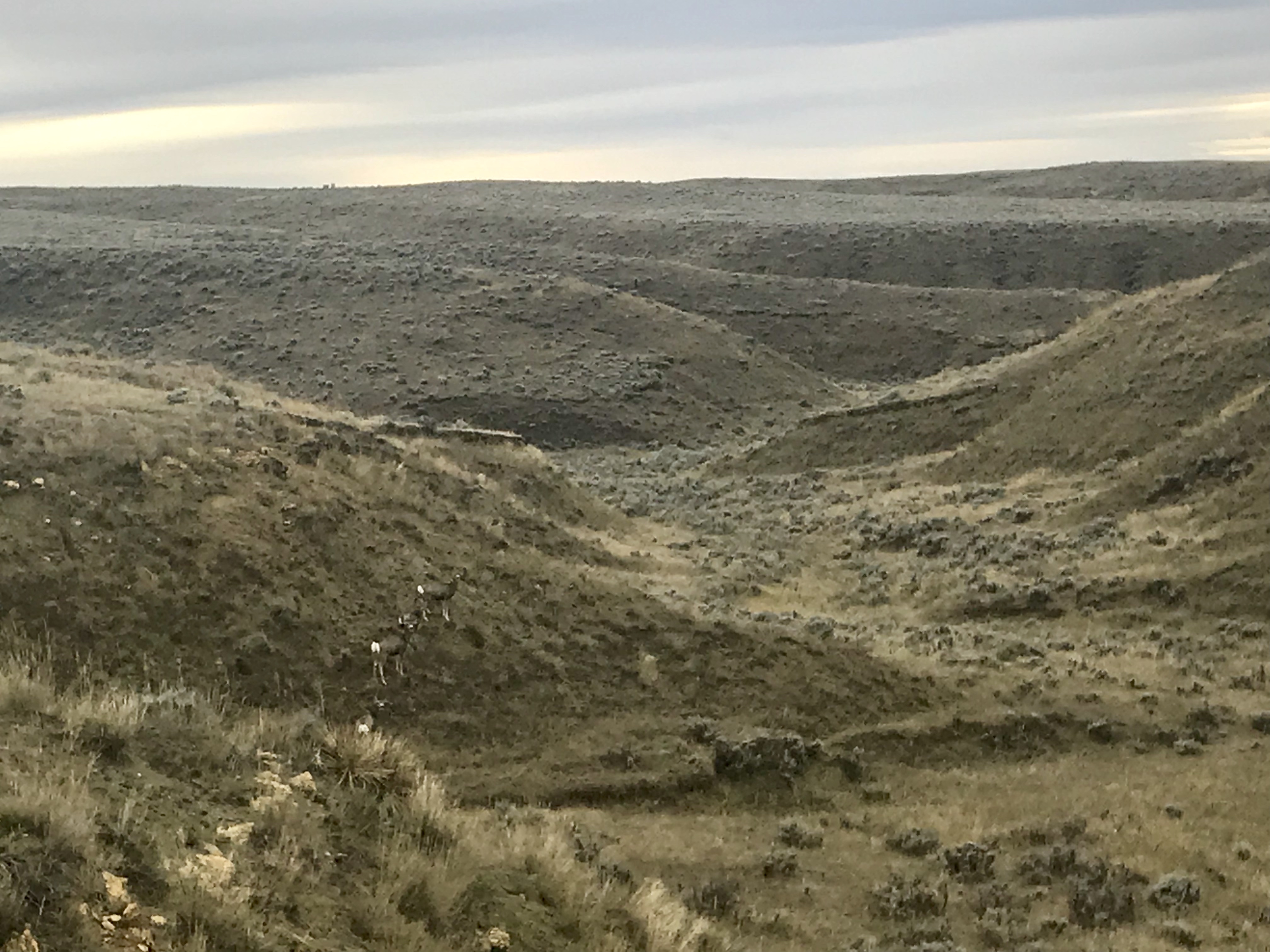 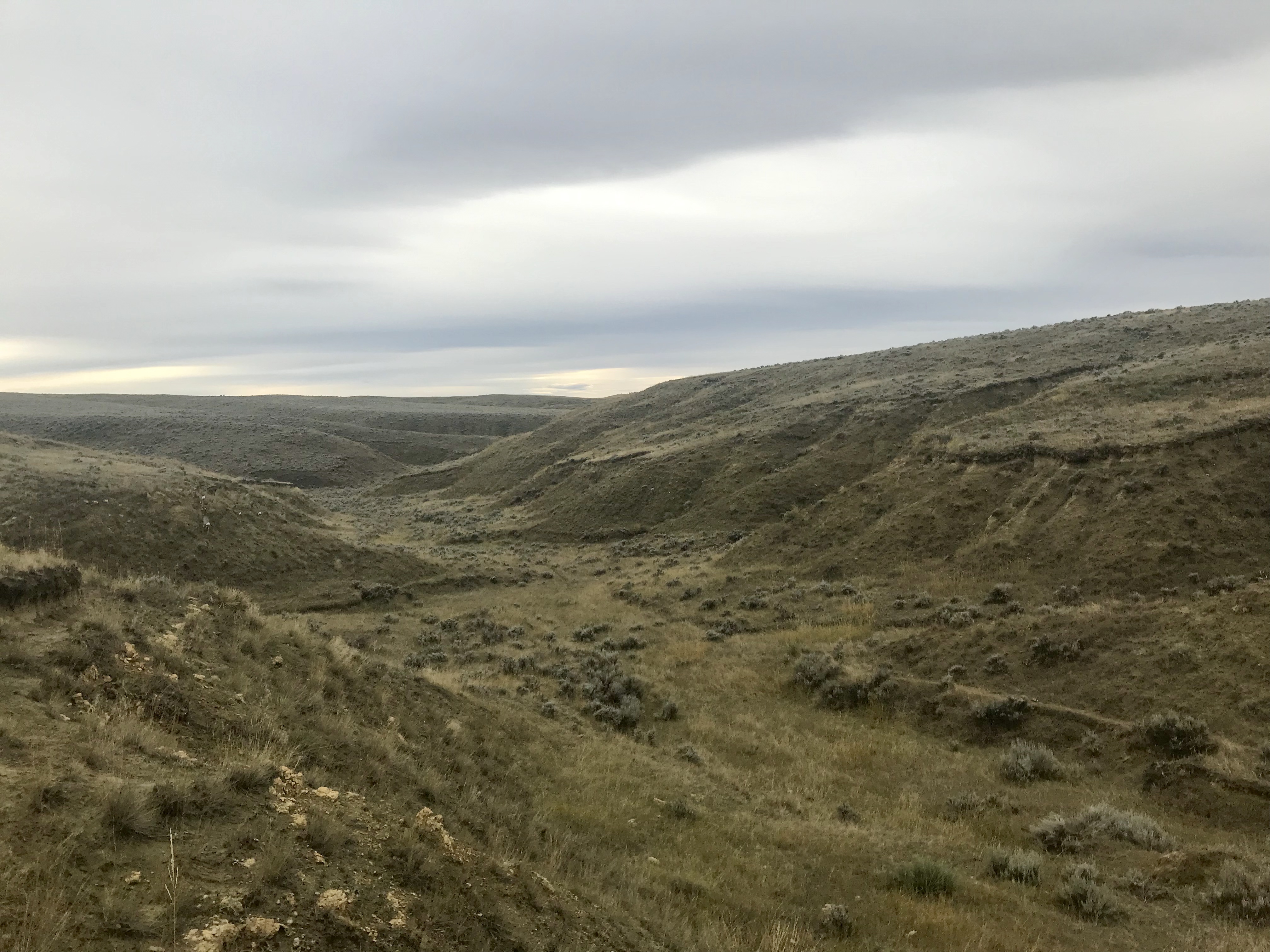 We got maybe a mile at most down the gulley when we came round a corner to see a Mule deer buck and does feeding up one of the draws from the gulley. My host instantly said he was a shooter (or words to that effect). We slip down and backwards to crawl forward to a position which would allow me to get prone for a shot. He had fed out of site at this point, so it was a waiting game to see which end he would come out of. A few mins later he came back out at the bottom of the gulley and I put the cross hairs on his shoulder. 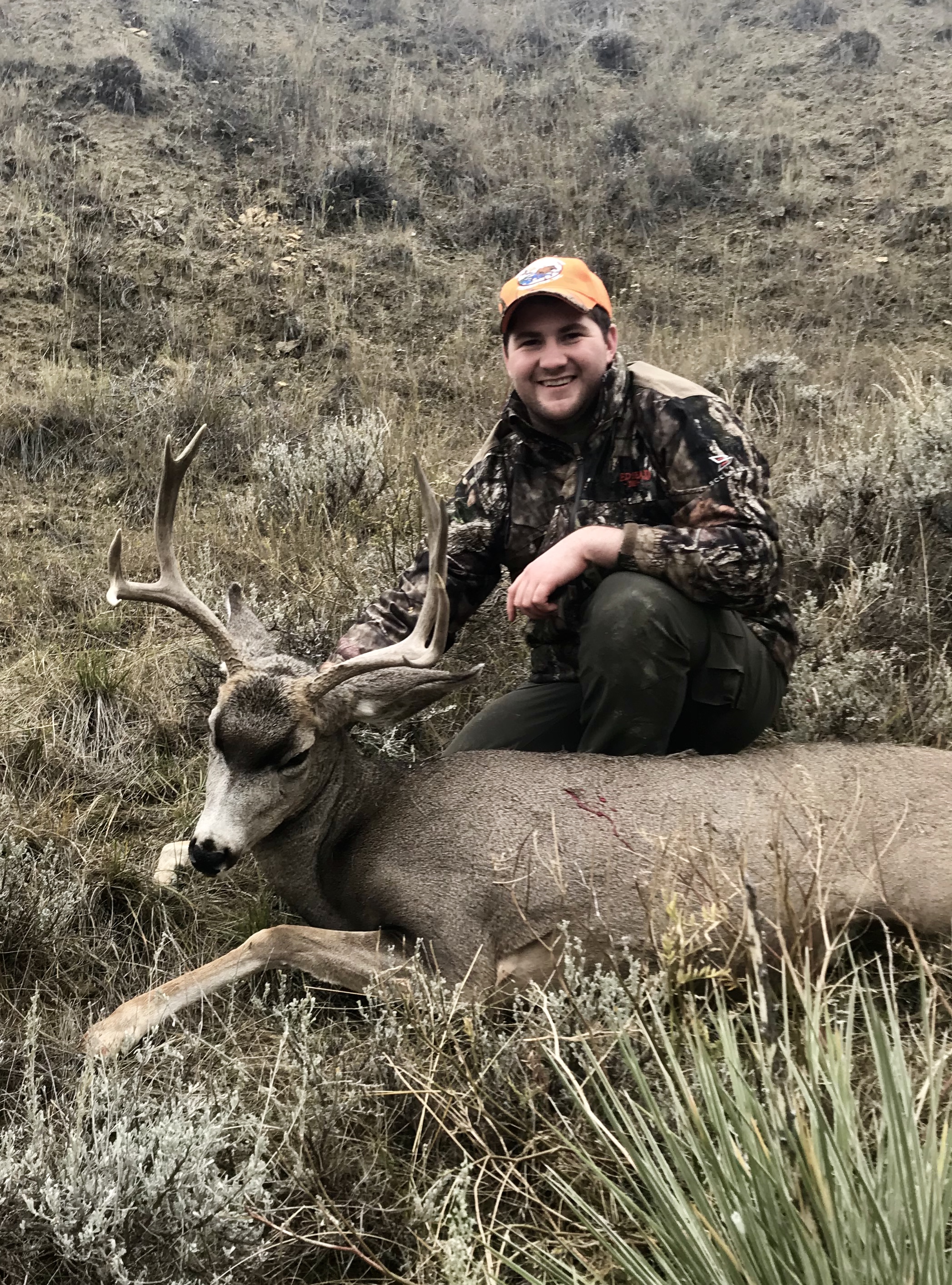 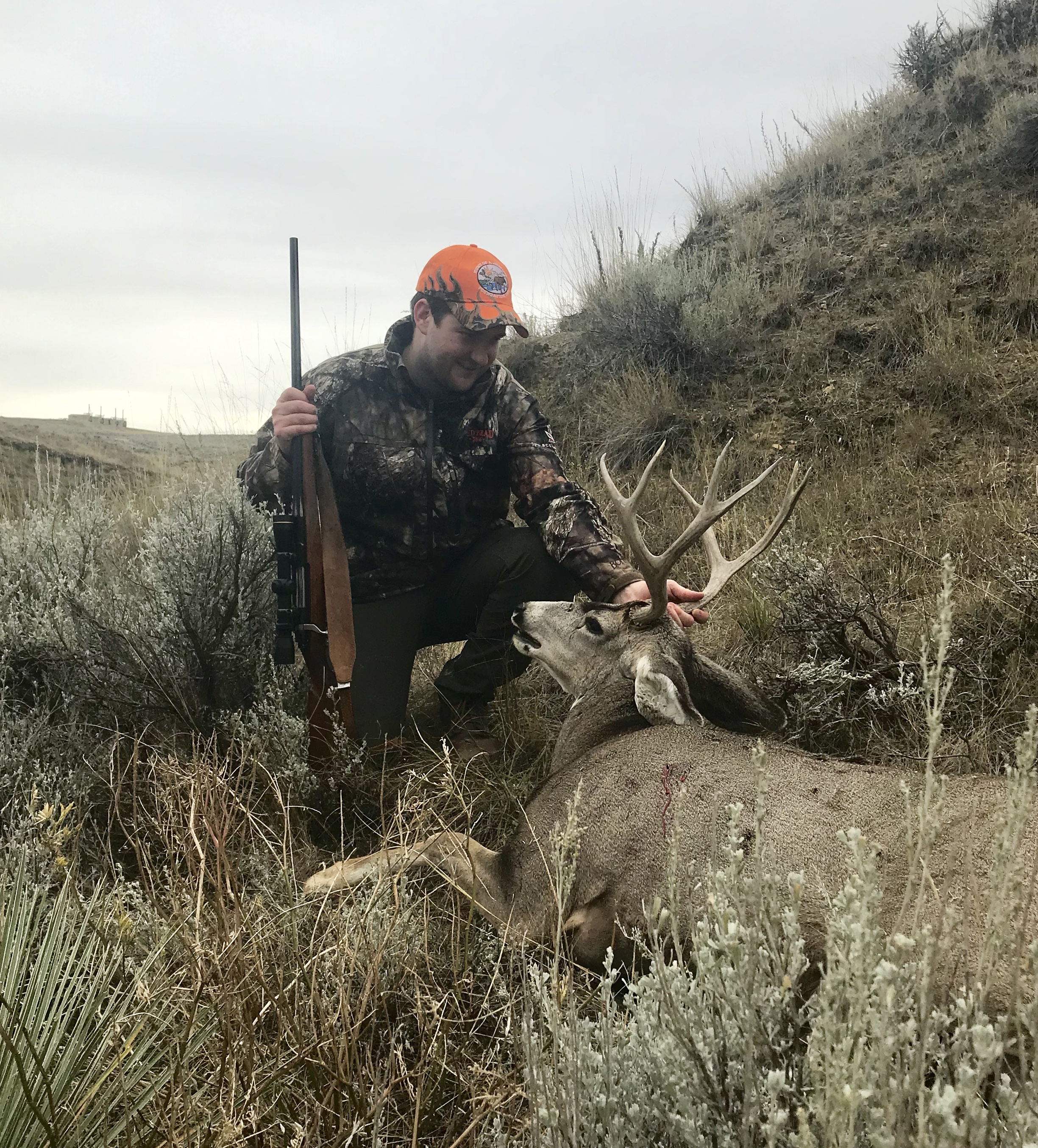 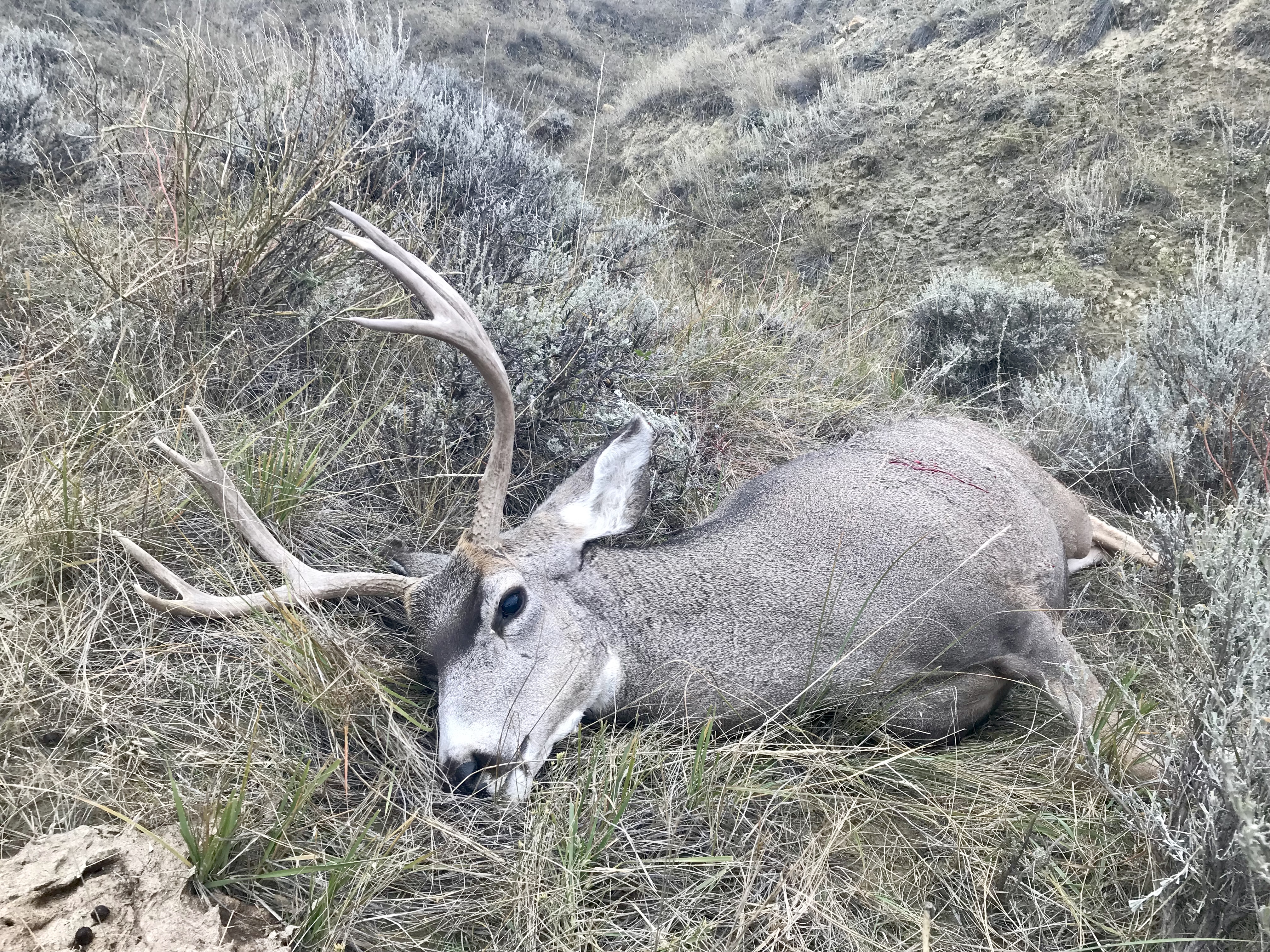 I was over the moon with him, a 4x4 as my first mule deer buck and a fun stalk to go along with it! The first thing I noticed about mule deer is the size of their ears. His body size was about that of a Fallow buck. 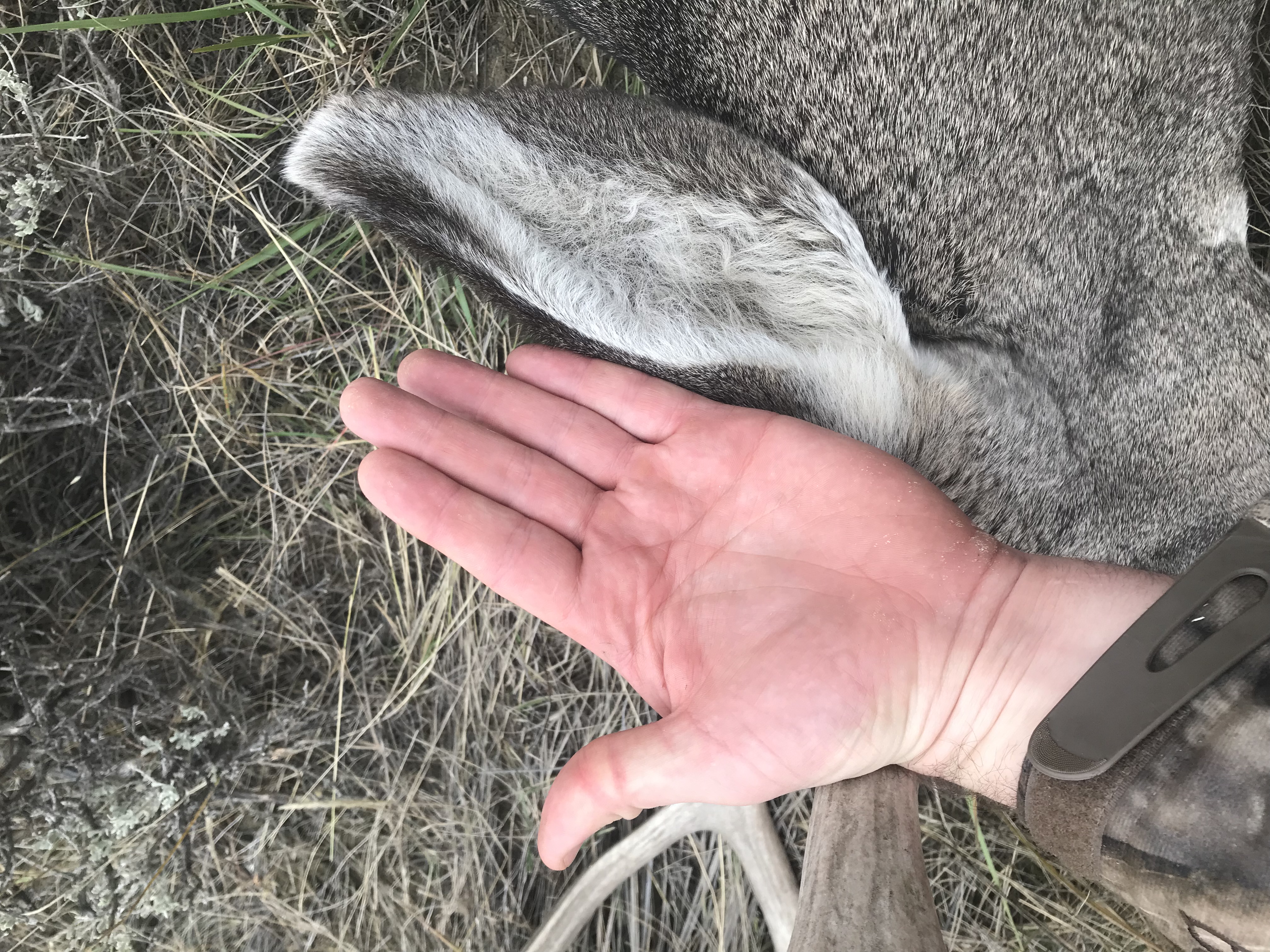 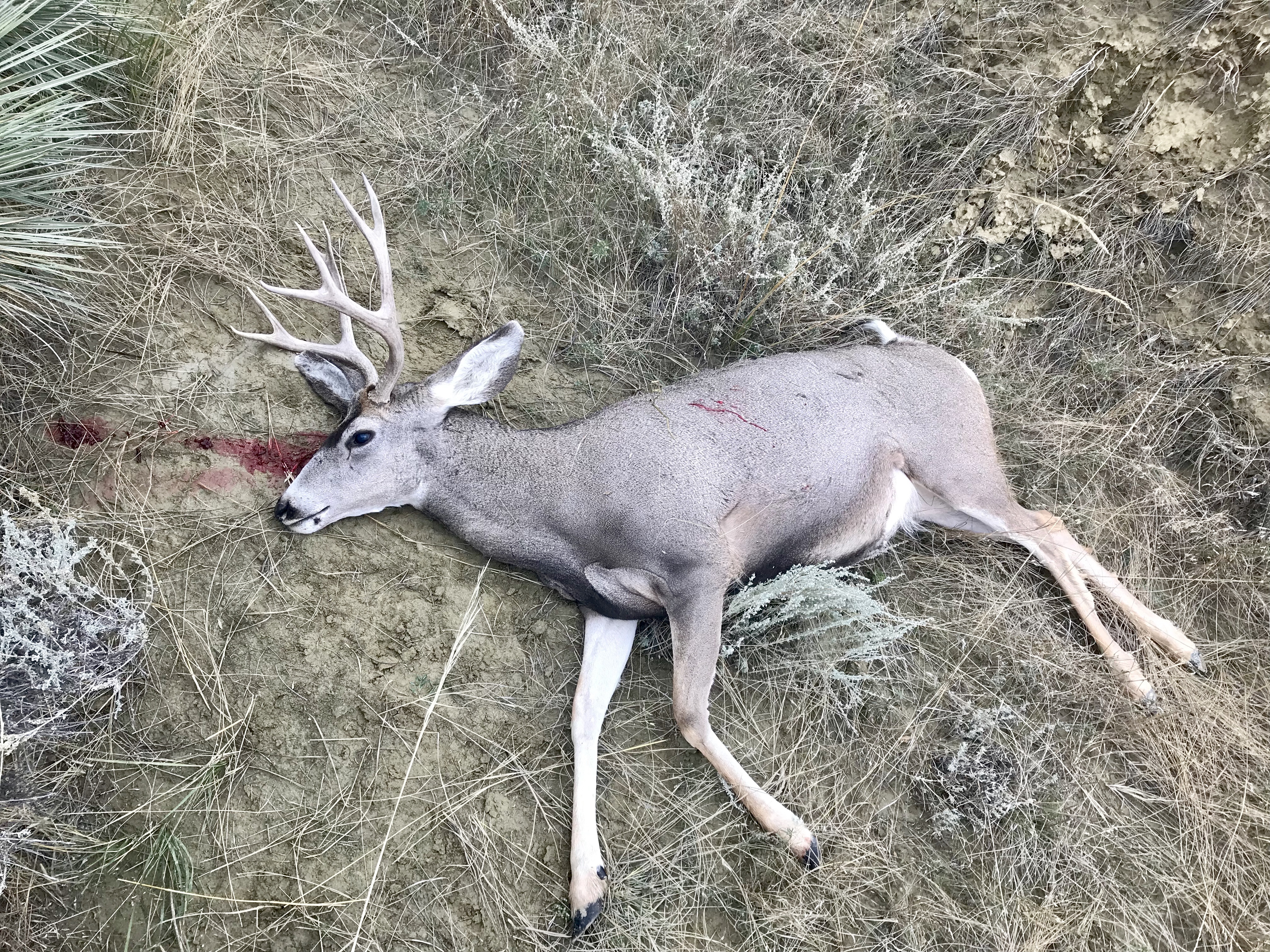 Congrats on your success. Pretty animals. Where in WY were you hunting?
Bruce

I was all tagged out in under 48 hours! However, there were 3 other hunters with tags to fill, so I was glad to help out. Everyone got their animals; 4 antelope and 4 mule deer ready for skinning and butchering. I also took the time to go for a long hike to try and take some photos of game and see what I may find. 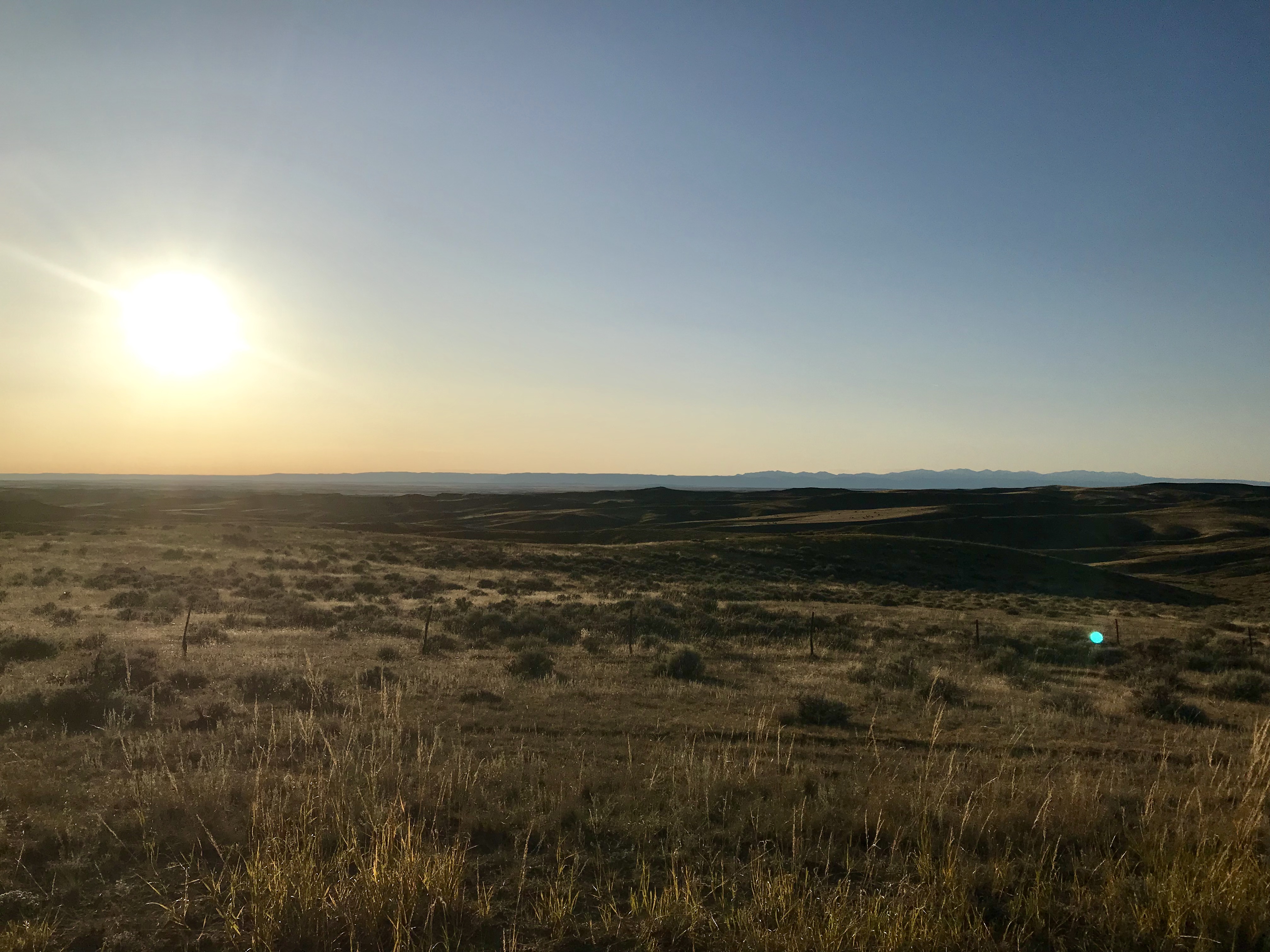 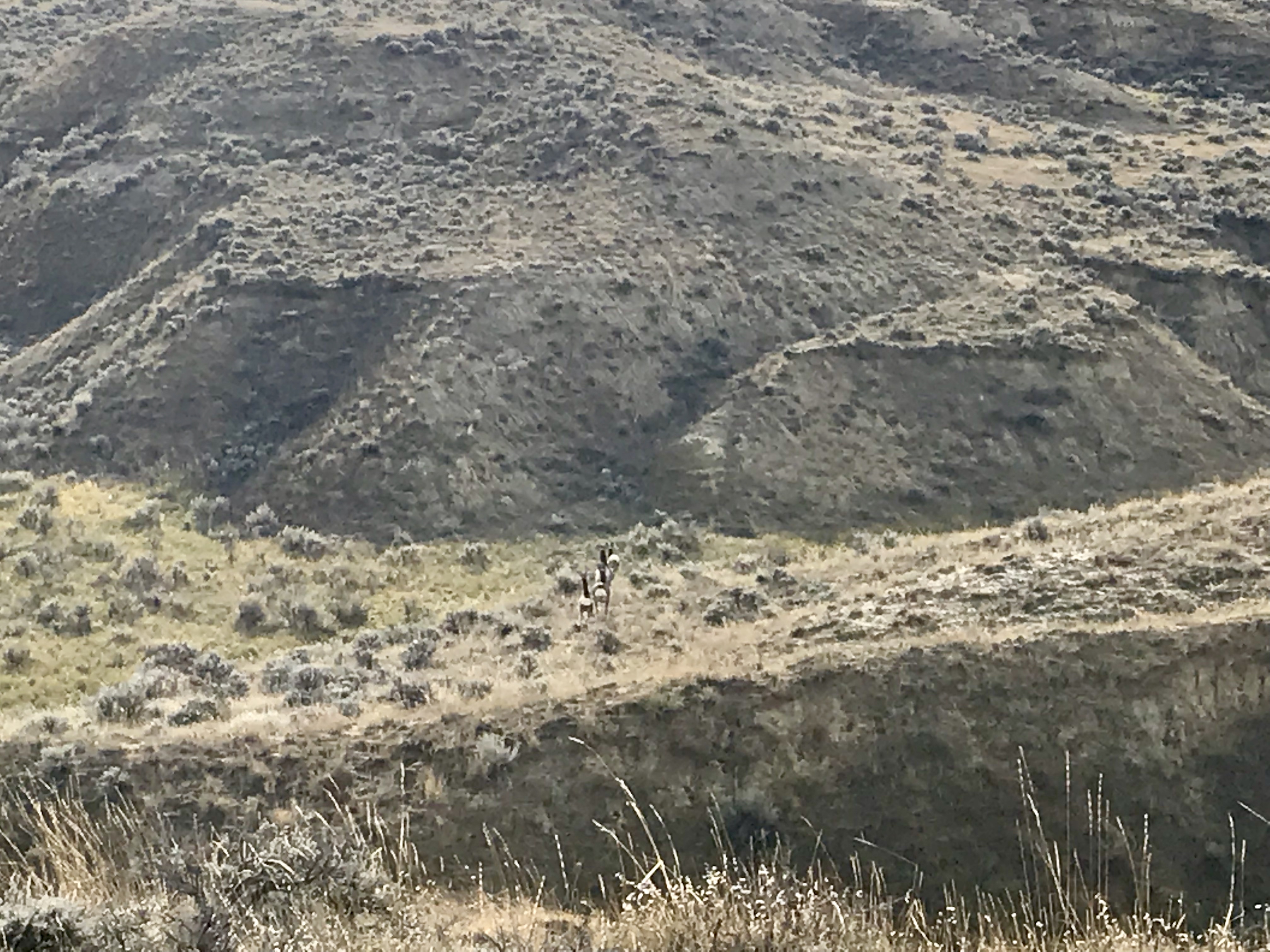 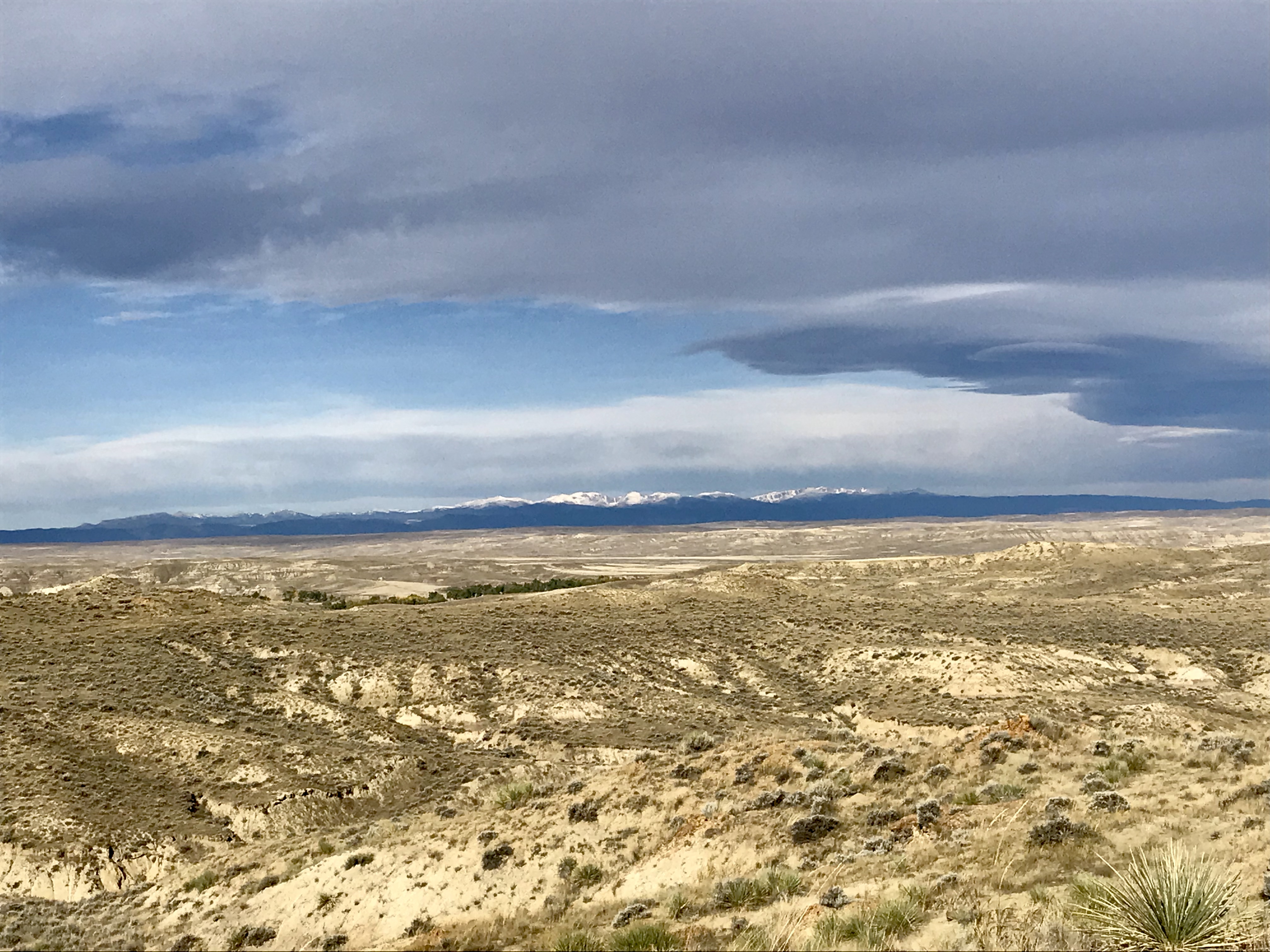 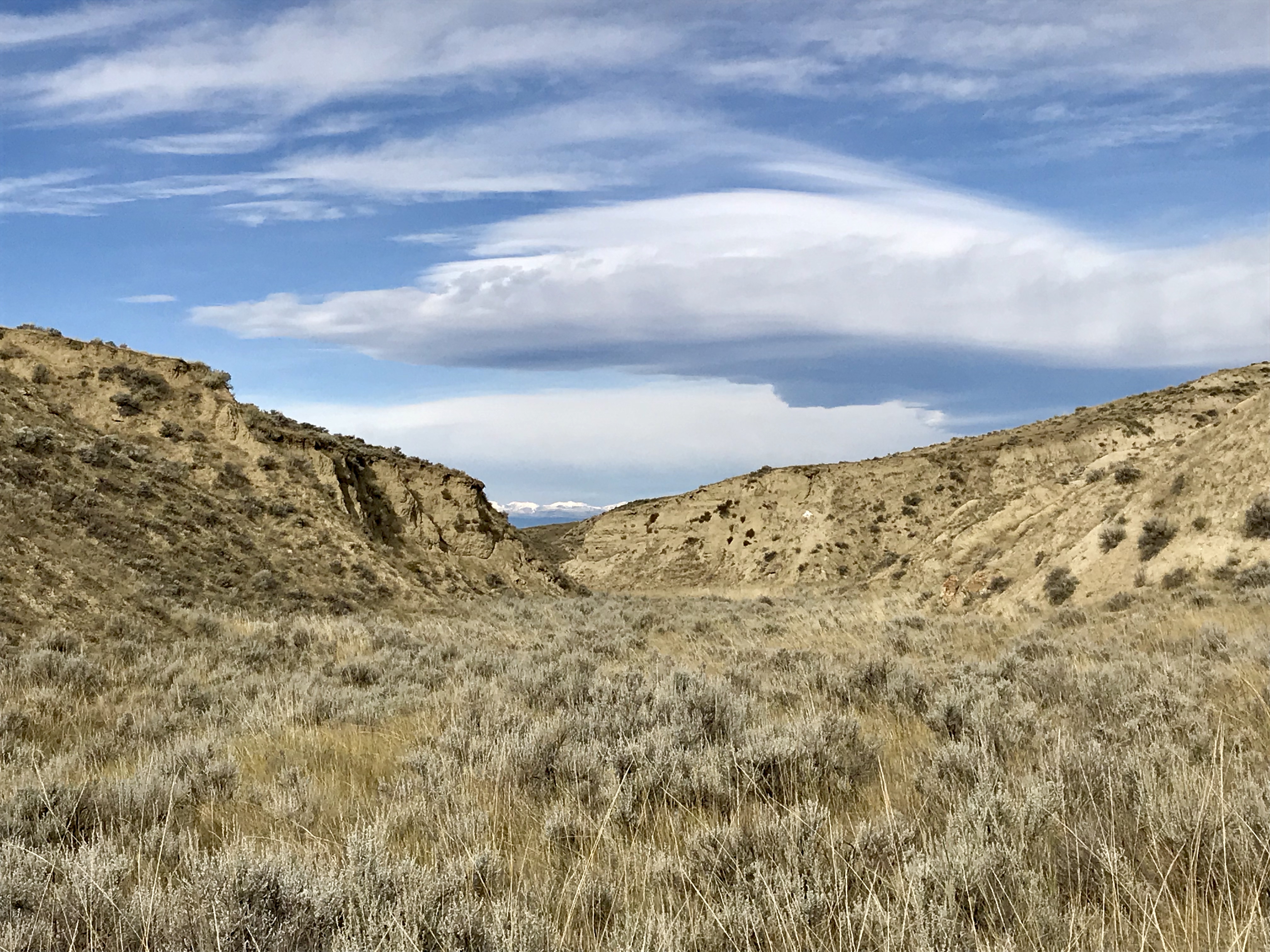 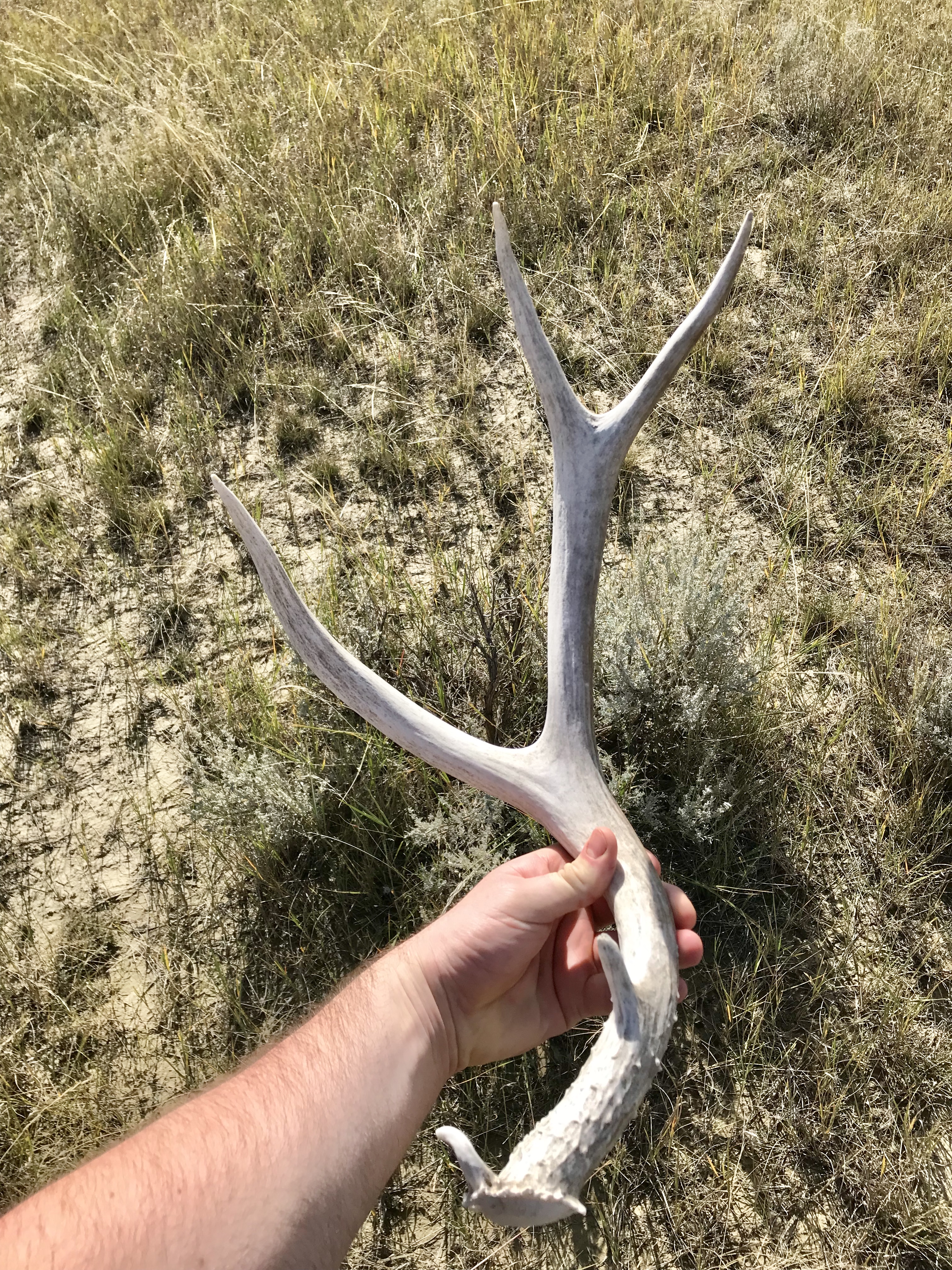 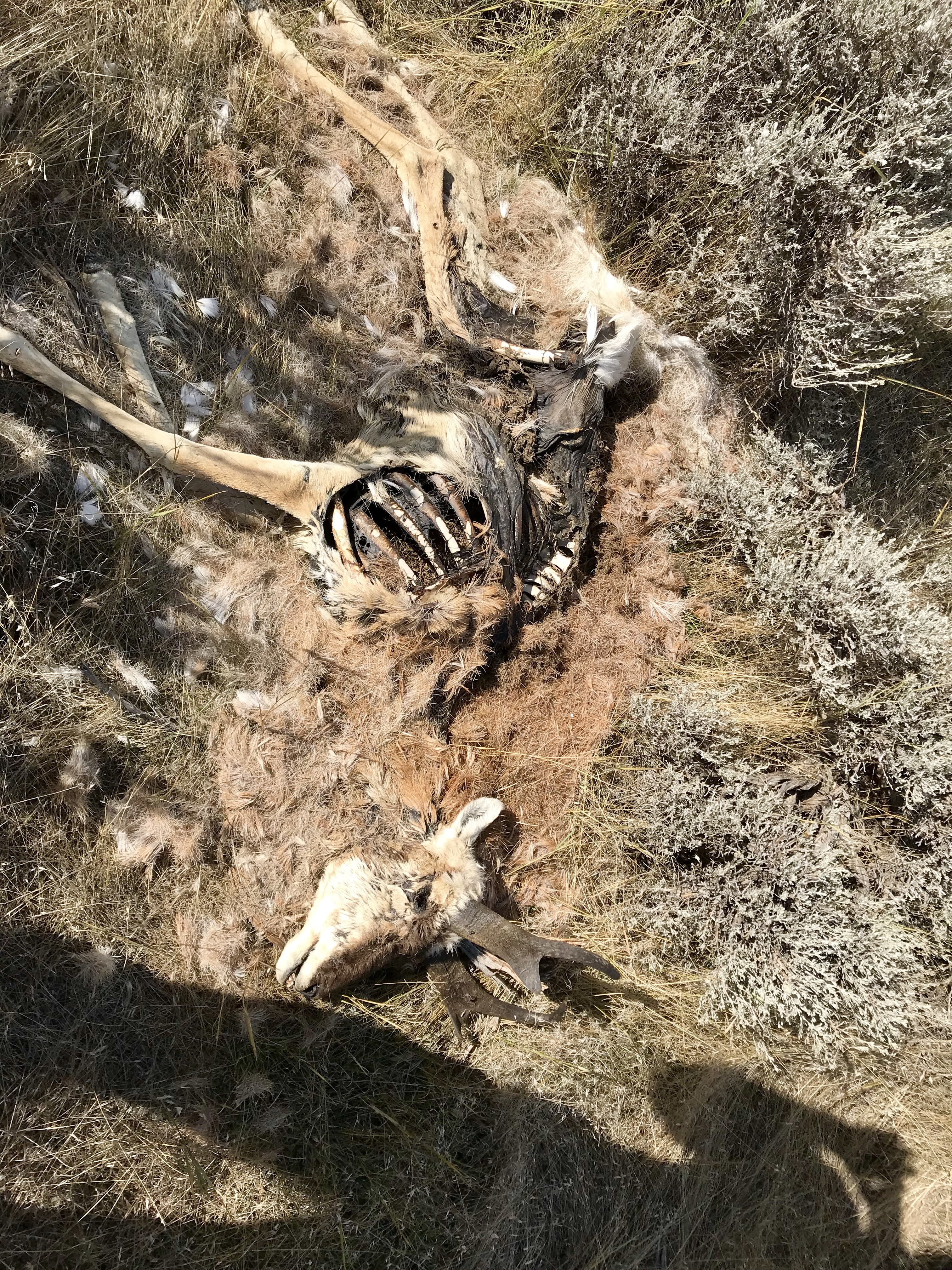 Congratulations on your success.

Great job, glad you enjoyed you trip to the great state of Wyoming! I have many fond memories of it also!
"Montana seems to be what a small boy would think Texas is like from hearing Texans" John Steinbeck

Amazing stuff mate, and kudos to the forum member that helped you out. I'm saving up points myself to hunt wyoming in the near future looks like an amazing place (and great people too from those I've met).

gillettehunter said:
Congrats on your success. Pretty animals. Where in WY were you hunting?
Bruce
Click to expand...

He was in the Kaycee area.

A couple of fine bucks! I’ve never tagged out that quickly! Around Kaycee, you must be on private land. Congratulations!
Africa on my mind.

It was a pleasure to meet and hunt with such a fine young man, memories I will keep with me for a long time. I will add more later but right now we are going 70 mph on Rt 70 making our way home.

Ridgewalker said:
A couple of fine bucks! I’ve never tagged out that quickly! Around Kaycee, you must be on private land. Congratulations!
Click to expand...

A combination of private and public, plenty of hunters about not many of them willing to put in the time and effort to get to the big ones though. As a matter of fact on our way in to look for a buck for ukhunter we passed 2 hunters driving out of the very same ditch. If only they would have walked a bit they could have had that buck.

Ok, Tom mentioned that another antelope was taken on the same evening as his so I'll tell the rest of the story. We were out running about in his rental vehicle when he shot his antelope and I forgot to throw a tarp in the back and not wanting to get blood all thru his rental we decided to cover the antelope with some sagebrush and return for it later. As we were on our way back to camp, and almost there Tom spotted a small herd of antelope alongside the two track road that we were traveling on. He insisted that one of the bucks in the group was a good one, I wasn't planning on taking one just yet but he seemed to really want to see me get one so I exited the vehicle stepped around the rear for a clear shot and at about 50 yards easily took care of him. Turns out that Tom was right it was a pretty nice buck, guess he's a fast learner. 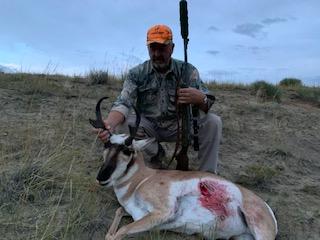 Excellent trip! Nice animals. I am a big fan of pronghorn antelope meat. Did you eat some backstraps?

What were your shot distances? Windy?

jduckhunter said:
........
If only they would have walked a bit they could have had that buck.
Click to expand...

You tend to get better trophies when you are willing to put your coffee cup down.

Tra3 said:
Excellent trip! Nice animals. I am a big fan of pronghorn antelope meat. Did you eat some backstraps?

What were your shot distances? Windy?
Click to expand...

I'll answer your questions for Tom as I think he will be making his way back home for the next day or two. We didn't sample any antelope but we did grill up some mule deer brisket that Tom marinated with some spice that he picked up at Cabela's. As for shot distances they were relatively close by Wyoming standards the pronghorns shots were something like 50 yards and his deer was some where between 100 and 150 yards. I never owned a range finder, I'm afraid it may take some of the fun out of the hunt. It wasn't really windy while we were hunting, maybe a couple of miles an hour breeze.

BRICKBURN said:
You tend to get better trophies when you are willing to put your coffee cup down.
Click to expand... 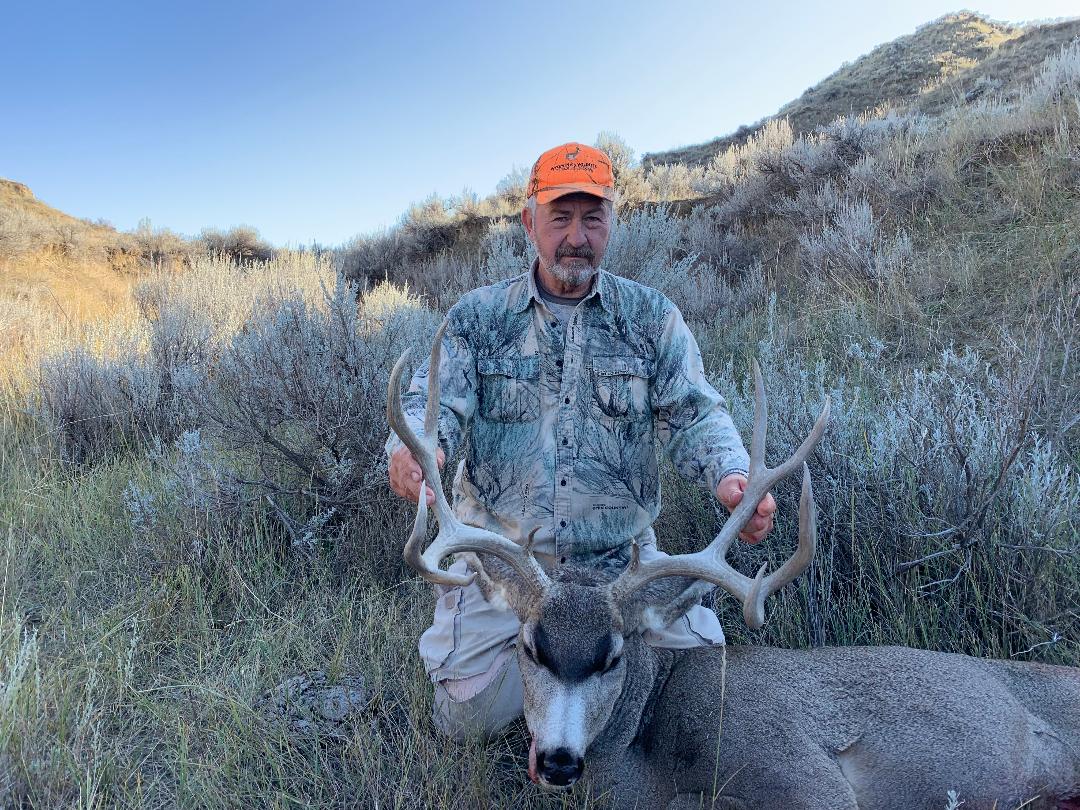 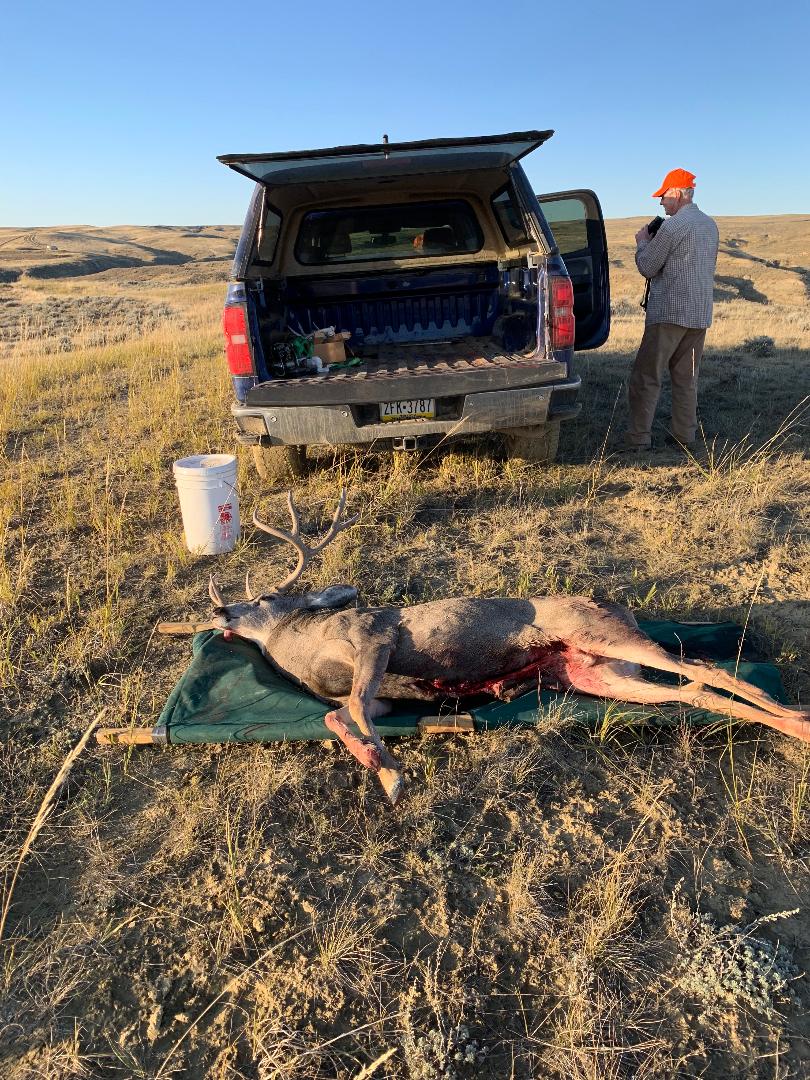 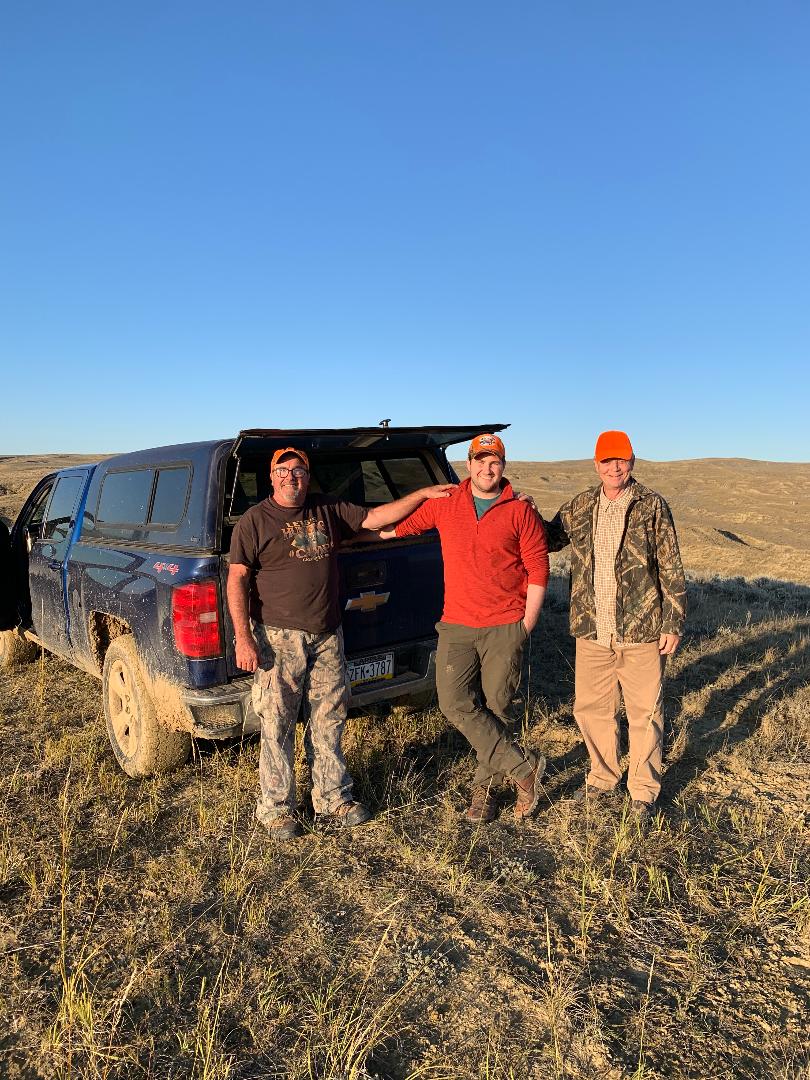 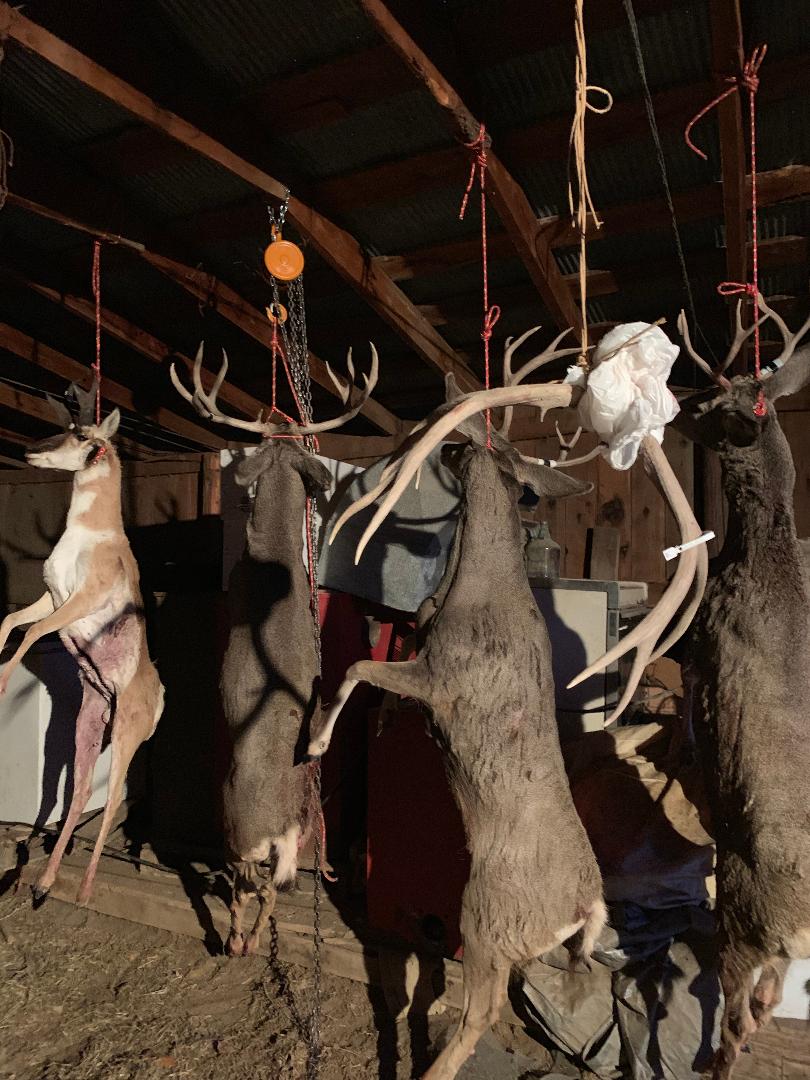 B
USA: My Favorite Hunting Moment So Far!