Much on NE Wy opens for archery/crossbow hunting Sept 1. I am a novice with a crossbow. I took a great roan with one a few years ago in RSA. Then 4 or 5 years ago following my double knee replacement I took a decent mule deer. In our area the whitetail taste a little better to us than mule deer due to their diet preferences in our area. Growing up it was almost entirely mule deer. As a result I hunt whitetails for eating if a really good mule deer doesn't show up.
Last year I passed up a 3X4 mule deer with the crossbow and got a nice whitetail with my rifle. This year I was out ahead of the season and didn't see a lot of deer. We are in a drought. Between too many predators, some spring blizzards and lack of water the deer population is as low as I've seen it. So I decided any branch antlered whitetail would do for this year.
I was up early and drove to my chosen stand. This stand is about 100 yards from the neighbors hay field. His field has little green in it this year but I still had hopes that I'd have some deer feeding there when it got light. The ranchers in that area didn't cut any hay either. Just no rain.... In a normal year the deer feed on the neighbors and bed on the ranch I can hunt.
It was dark, of course as I walked in. I didn't bother with a headlamp as I know the way. There is a old 2 track to follow most of the way. It follows the border fence. When I got 3/4 of the way to my stand I heard and animal "blow". Thought maybe a pronghorn, but I wasn't sure. Another 20 steps and 2 more snorts from near my stand. Well crap. Hate it when that happens. Not a good thing to alert everyone in the neighborhood that I'm there. Found my way to my tree stand and climbed in for my morning sit.
As it got light I would stand up and turn around in my stand occasionally to peer into the hay field. I was hoping to see a buck that might make its way past my stand and have some warning to get ready. 2 yrs ago with my rifle I was surprised by a buck in this stand. It is situated with your back to the field facing the bedding cover. Better to be prepared. About 30 min after legal shooting light I saw 2 deer on the far side of the field. Perhaps 3/4 of a mile Too far to see if they were bucks and positioned such that it was unlikely that they would come to me.
The wind was very spotty. I'd get a breeze for a few minutes and then nothing. With the wind down the mosquitoes were itching to get at me. I hadn't put on any repellent because I didn't think any would be there. A little over an hour after shooting light I stood up to see if anything might be coming my way. Nothing. As I started to turn I spotted a whitetail buck at less than 80 yds away headed my direction coming from the bedding area....
I carefully watched his movements and when he was looking away I reached out and picked up my crossbow off of a hook placed there to hold it. I swear that deer looked right at me as I finished that. I took care to not make eye contact or to move. The tree was a cottonwood with lots of leaves that provided a great backdrop. He dropped his head and continued to come towards me. When his head went behind a tree I sat down and raised the crossbow. He then stepped into an opening a little behind a tree that I had ranged at 40 yards when I got there. I figured he was 45-50 yards away.
He was quartering a little bit towards me but a decent angle so I felt good about taking the shot. I could hear the arrow thwack into him, but couldn't see the exact hit location. He ran 66 yds and tipped over. The double lung shot killed him quickly and humanely. Getting down from the tree stand I went and found my arrow. Located where I thought he was standing. 48 yds with the laser.
Young eating deer for this year. The fun part is he was still in full velvet. Can't remember the last time I killed a velvet buck. Field dressed him and went to the ranch headquarters. Then home. Hung and skinned him. Next day he was cut, wrapped and in the freezer. Next we'll see about a pronghorn.
Bruce 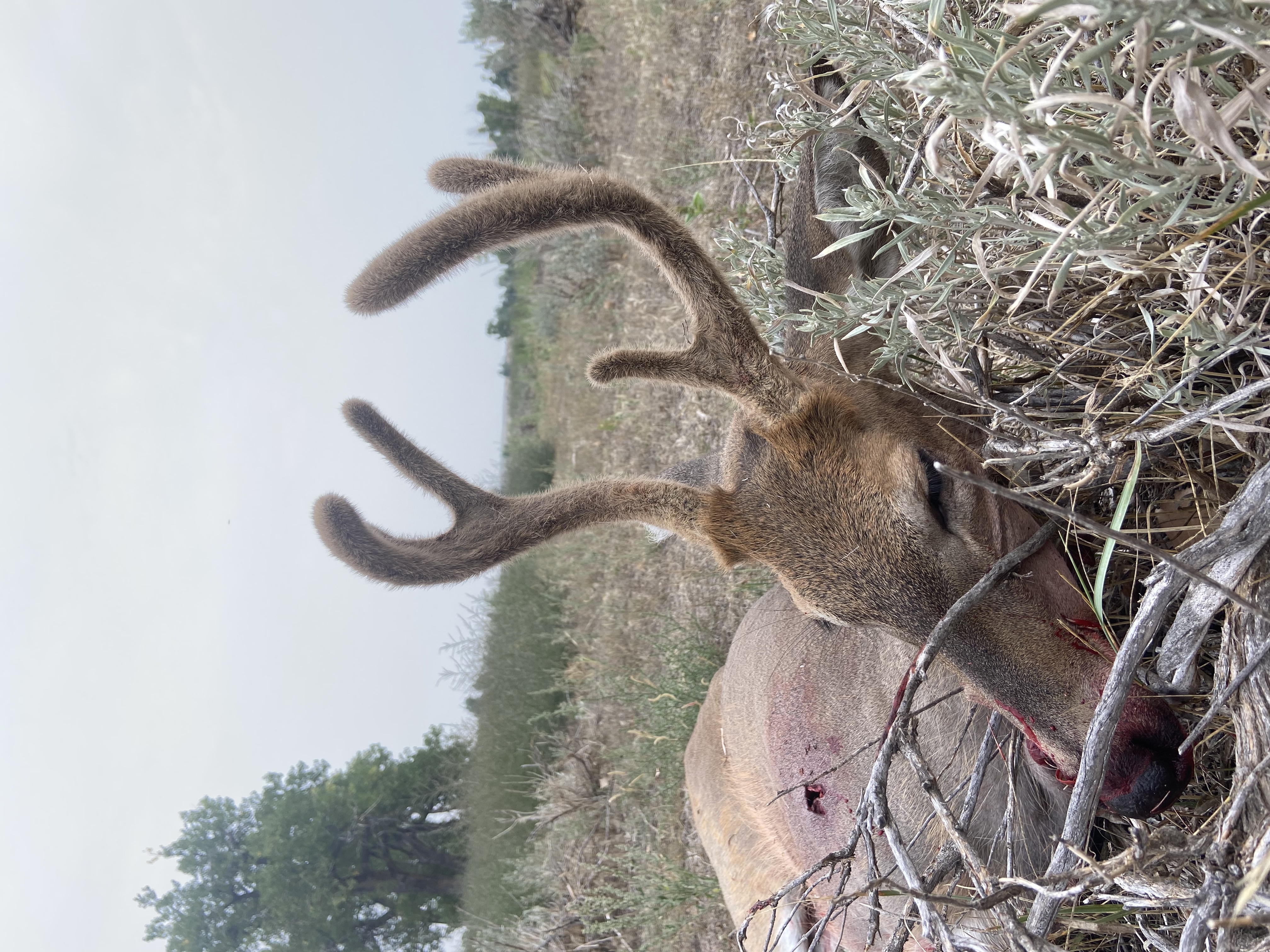 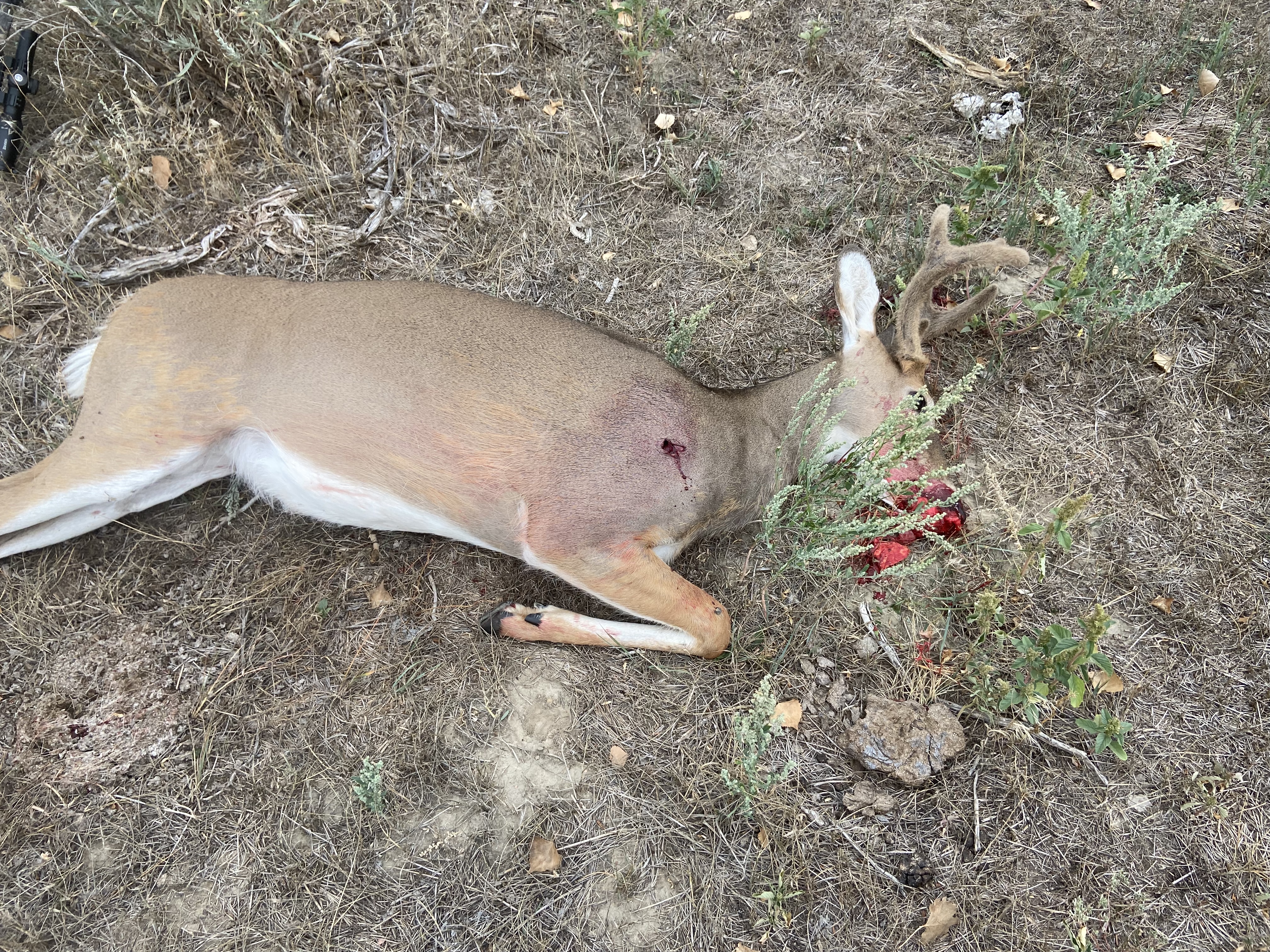 Perfect shot! I was in Yellowstone NP last week, you guys are most certainly in need of rain. All my favorite streams were reduced to mere trickles.

Im in Cody now with my wife. We came in via Evanston then wandered our way back and forth across the western half of the state hitting places like Pinedale, Bondurant, Jackson, Yellowstone, Gardiner (MT), Dubois, Riverton, and now Cody. Yes! Water is needed everywhere we went!
Congrats on your velvet buck!
Life is too short to hunt with an ugly gun

PHOENIX PHIL said:
Perfect shot! I was in Yellowstone NP last week, you guys are most certainly in need of rain. All my favorite streams were reduced to mere trickles.
Click to expand...

Phil,
The hunting in Yellowstone NP is great this time of year!

I was just at home(about an hour 30 minutes north of the park and I agree with you guys, water is scarce. We have been getting a little rain though, a little to late though.
"Montana seems to be what a small boy would think Texas is like from hearing Texans" John Steinbeck

Congrats Bruce, your season is better than mine so far. I fly in on week long elk bowhunt tomorrow and hope the weather holds.
Bowhunter addict
You must log in or register to reply here.