It's been a couple of weeks but I have been chasing elk in Utah for the last one or so but got to a computer to post up my hunt on Monroe Mountain in Utah.

We started up seeing nothing but big bull elk, this mountain area is famous for the Spider Bull and there are some elk up there that are coming close to what he came out at but to draw a tag you need to give up your first born and 30 years of waiting. That is unless you are real lucky or have lots of money like the hunter who shot the Spider bull did. But back to the hunt.

We saw very few buck deer and not too many does. One group on private property had around 40 does and 2 bucks in it. We saw them a couple of days before the hunt opened. We also watched a herd of around 60 elk filter around a hillside. There were at least 4 bulls of 350"+ in this herd so they were getting back together after the main rut.

Opening day found me hiking around the edge of some pines and sagebrush. All I was seeing were does and fawns but did see the results of one ticked off bull elk. That night I hiked into a area that had been burnt but all I kicked out of the area were elk. This went on for4 more days. It was hotter than a firecracker during the day and all the animals were bedded down around 10 am in the morning

Day 5 found me hiking through some aspens where the Forest Service had thinned out some pines to allow for more grazing for cattle. I came around a group of trees when I saw 6 or 7 does about 100 yards off to the east. I got my glasses out and started to check them out left to right when I spotted my buck. There was no question that he was a shooter. Fairly wide and nice and high.

I laid across a large log and put the sights right behind his shoulder and pulled the trigger, he dropped like a rock. When I got up to him he was still alive but I didn't want to have to put another shot into him but as I was getting ready to do so he expired. I found that I had hit him through the neck with a 250 grain Thor bullet out of my .50 caliber muzzle loader. As some of you know they have the trajectory of a rock and I hadn't noticed the wind that was blowing from my left to the right which moved the bullet some.

Anyway he was down and I went to work after I had notched my tag. He was a huge deer. Well over 300 lbs and I had a hard time getting him up onto the rack of my 4 wheeler when I returned with it to take him out. I was thinking that I could just drag him behind it but mustered up the strength to get him up onto it.

I ate a lot of tag soup over the years trying for one like him and I enjoyed every bow of it.

Just remember, you can't shoot a big one if you shoot the little ones. 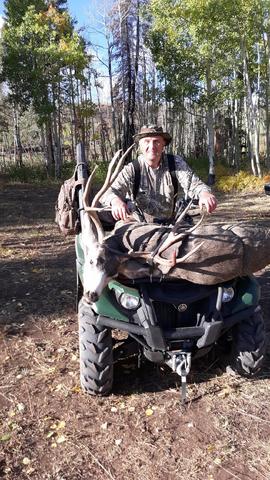 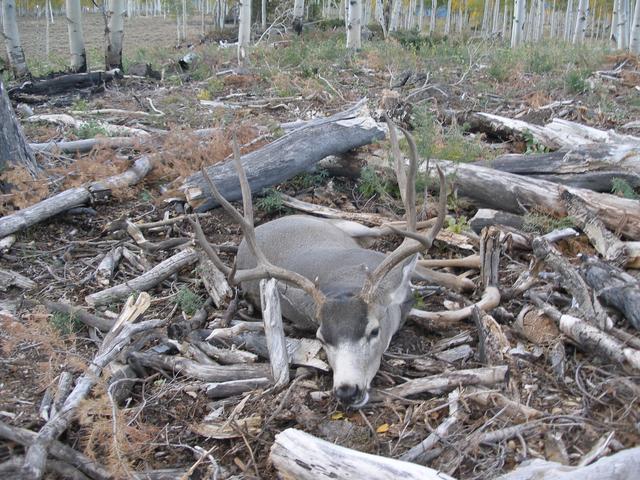 Great looking mulie you got yourself, congrats
Nathan T.

Congrats! I was supposed to be in Utah chasing mule deer but unfortunately work got in the way

Good Job and congrats! He looks like he has some age on him as well.
It'not the years, it's the mileage......(Indiana Jones)

That is one fine mulie! Great job finding him!
Congratulations!
Africa on my mind.

Congrats on a great buck. Wind certainly does pull those smoke poles!

Congrats Jim! That is a great buck. Really deep forks and beautiful shape to the rack. One of the best bucks to come off the Monroe this year I’m sure.
I’m headed to southern Utah for the rifle deer hunt next Thursday. Hope I can do as well as you did.

Congrats Jim on a fine muley!

Congrats that is a very nice trophy.

Great buck!!
"Montana seems to be what a small boy would think Texas is like from hearing Texans" John Steinbeck

WOW he is amazing! Congratulations!

Sounds like you are holding out for a Henry Mountains tag.

I am lucky in that 35 years ago while still living in Utah I purchased a lifetime hunting and fishing license. It gives me a general season deer tag, small game, and a fishing license every year. However a couple of years later I moved to Colorado and am considered a non resident of Utah and need to apply as a non resident for any and all of the limited entry and once in a lifetime hunts. A few years ago I cashed in 15 deer points for a Book Cliff muzzle loader tag and found a couple of bucks larger than this one. However I was using a open sight muzzle loader and a 250 yard shot was out of the question and I blew the stalk in high brush and didn't even get a shot off.
If you don't care where you are, you are not lost.

inkonkoni
Enjoy the bush with Respect
Today at 6:24 AM •••