This past week, myself and a couple of clients made the trek to Turkey, TX and the Rockin G Ranch. A couple months ago I posted a thread here on AH asking for recommendations regarding a hog hunt that I could entertain a few customers. AH's very own, Erik Grimland aka "gizmo" answered the thread. With a few questions answered and a couple of references contacted, I decided this would be the place I would like to book a hunt. 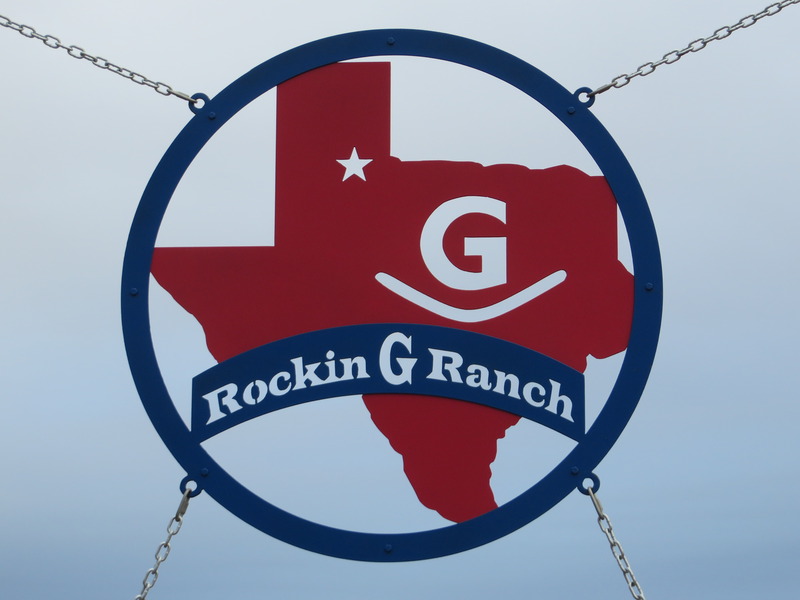 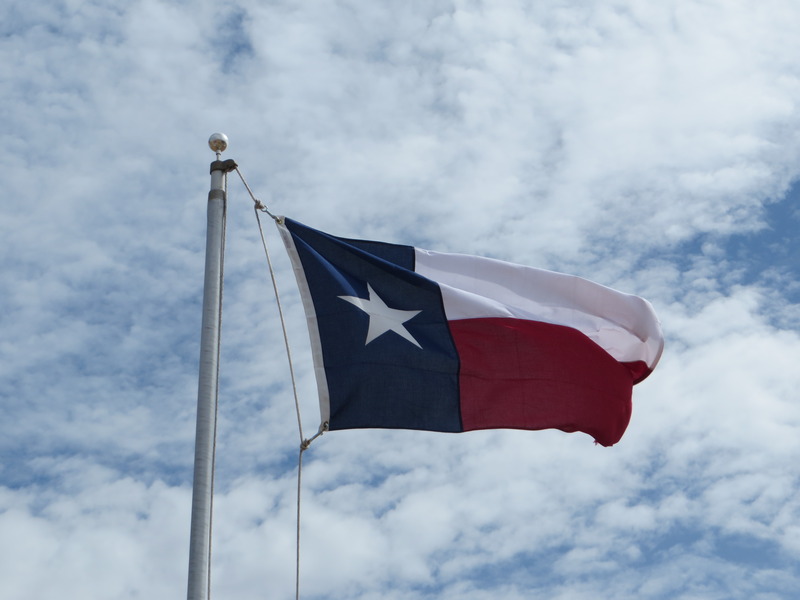 The hunt was to be 2 days with 3 nights lodging. On the first evening while enjoying some appetizers and a couple cold beverages on the back patio, roughly two dozen hogs chased the turkeys off the green field below the lodge to clean up some scattered corn. (Hopefully, you can see the pigs in the photo taken with my phone camera!) 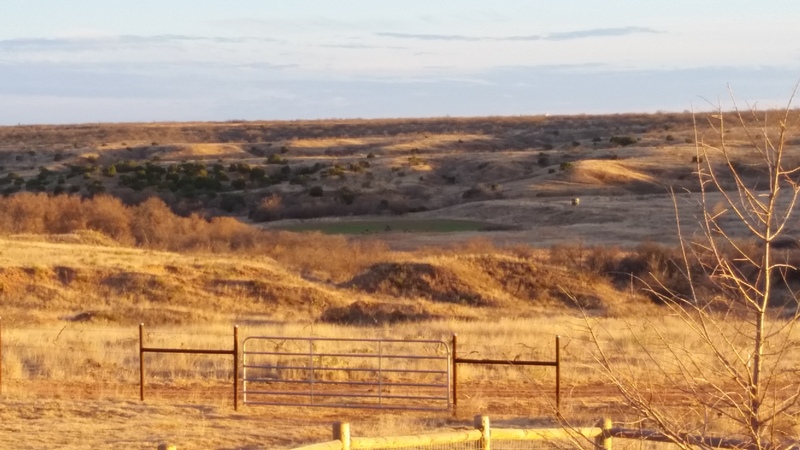 The following morning started the hunt. On that morning, I was in coyote central seeing 5 within the short 2 hours we were out hunting. I had more than ample time to take one of the coyotes that came by the blind just at daylight, but decided to pass on the shot with it being prime time for the hogs. While riding around after leaving the blind, I had a chance at two more coyotes but the sun was up and the coyote was in a direct line giving me that dreaded scope glare that ended my chances. I spotted two more on the way back to the lodge but they slipped off into the brush before a shot opportunity was offered.

Carlton managed to enjoy the morning with almost 50 turkeys, numerous deer and waterfowl at his location. Five pigs slipped into the green field he was overlooking, but he was so fascinated with the turkeys that they managed to make it back into the tall grass without a shot being taken. Carlton commented that he couldn't care less about not taking a shot because it was the most enjoyable and relaxing morning he had in several years.

Stevan managed to score on a couple of pigs that morning getting our group on the scoreboard. 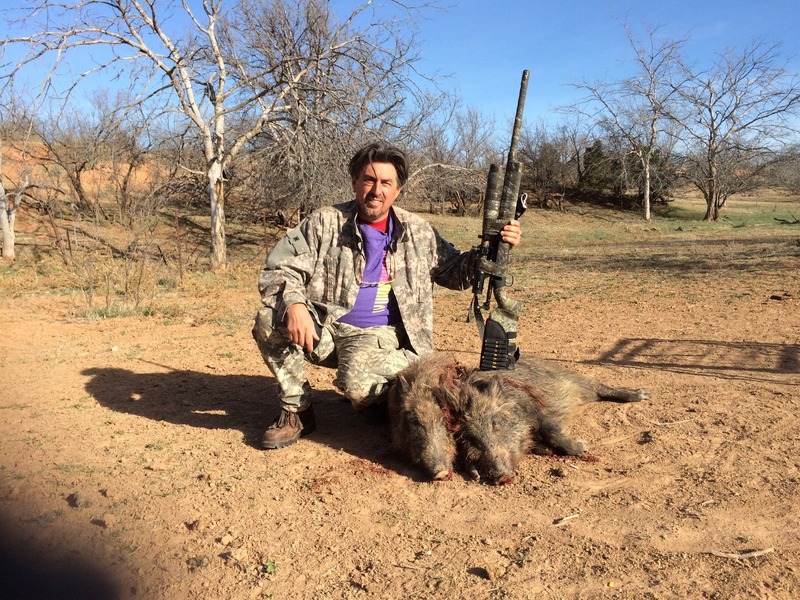 With a few conference calls behind us and general emails and business taken care of, Erik, Carlton and I took a ride just to look at some of the exotic rams and billies on the property. Before we knew it, we were on the stalk and the hunt was on.

After blowing the first couple stalks, I finally connected on the largest of the angora billies. The billy was among some cedar trees. We had stalked to within about 30 yards with him unaware of our presence. The billy finally presented a quartering away shot at about 40 yards thru some brush. Carlton was up next and took a dandy of a desert ram with a perfectly placed heart shot. After playing a quick game of Chinese fire drill like a bunch of clowns, Carlton also took an ancient Corsican ram. While we were loading up the animals already on the ground, there was a very large rambo ram across a canyon. I couldn't take it and went back and got my rifle and the stalk was on. I finally got into a position to take a frontal shot at probably 150 yards across a canyon. At the shot, the ram humped up then proceeded to fall about 25 feet straight down off a cliff. We were lucky that we were able to get the mule to a location that we could use the winch to get him out of the canyon. 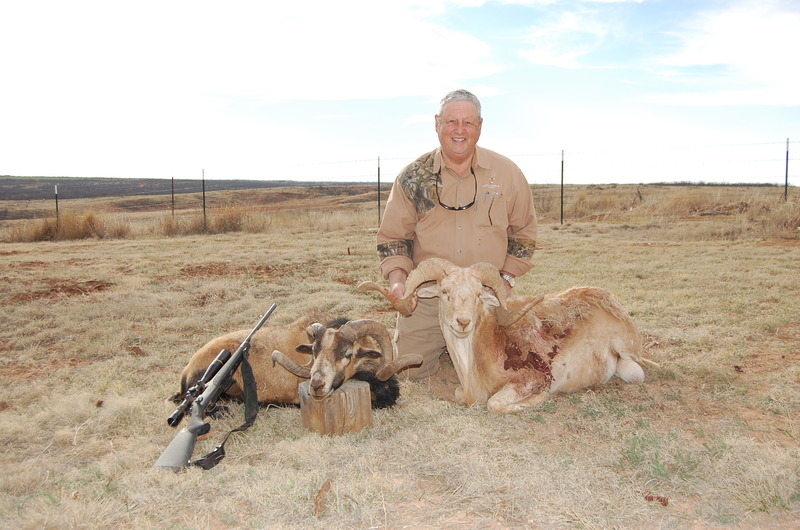 Me with my trophy billy and ram. 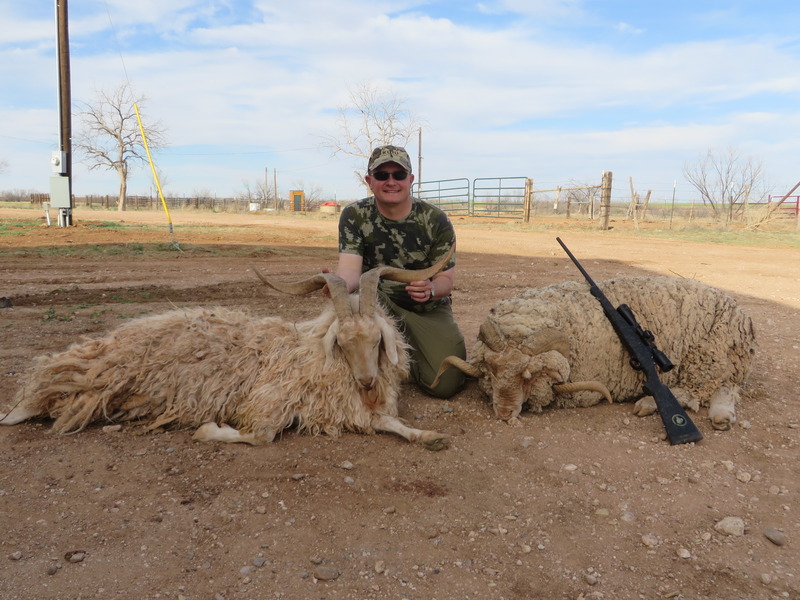 The big rambo ram was a hoss! He was somewhere in 350 lbs range and not as much wool as one might believe!!! 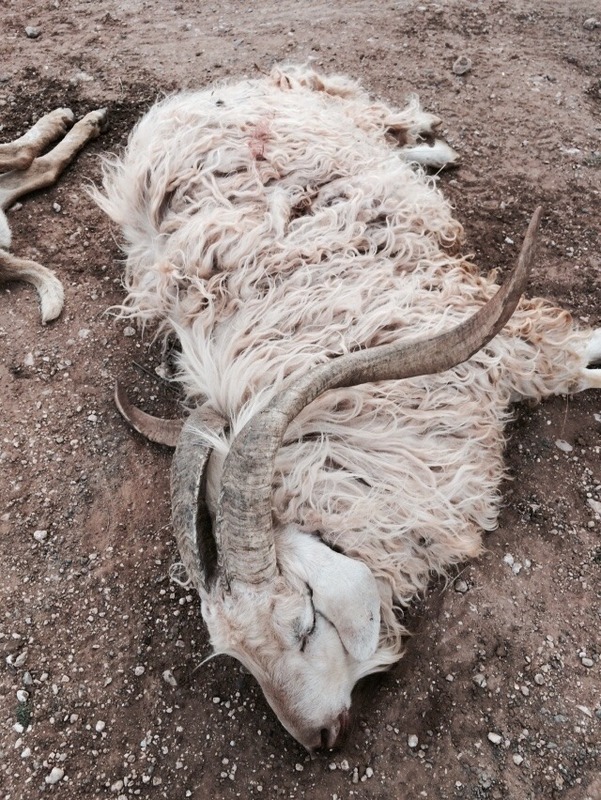 We had a very large boar come out into the adjacent field just after we made it to our blinds that evening. I could hear the hogs down the creek bottom and knew it was just a matter of time before they made their appearance. Just before dark the bullets were sent on their way. I was able to put a small freezer size gilt on the ground and Stevan added two more to the pile. 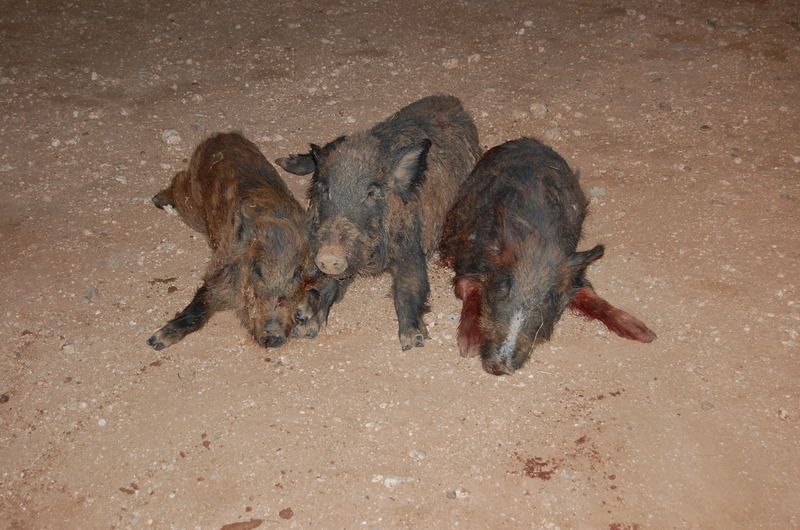 The following day turned off cold and windy keeping the pigs in the thick stuff. While heading to our evening blinds, the pigs were already in the field. We made a stalk on them, but we didn't have our communication together. In the end, one pig was wounded but managed to make it back to the creek bottom and not recovered.

The hunt and Erik along with Bruce and Wade were fantastic. They were very gracious and accommodating hosts. I believe we all have already discussed a return trip. I know that I have young six and four year old sons that I'm looking forward to bringing down to hunt with Erik along with another friend and his 12 year old son. Carlton is already discussing a return with his son and nephews. Heck, I'd go back just for the food, man, was it outstanding!!! You could tell he had done his homework prior to our arrival to ensure our hunt was extremely enjoyable. We saw numerous hogs every day along with mule deer, whitetail deer, turkeys, dove and waterfowl, along with numerous exotic species. I wouldn't hesitate to book any of the hunts offered. Overall, I highly recommend hunting with Erik at the Rockin G Ranch. Class A people and animals at the Rockin G!!!

Cody thank you so very much for your kind words. I truly enjoyed y'all's company and that was the most fun I've had in a long time.

Those are some very nice animals. Those rams and goat are top quality trophy's for what I can tell by the pictures. I would have liked to see a few dead coyotes with them though.LOL I am sure gizmo would have liked that to. Great job and one day I hope to head to texas for some turkey at this ranch.

Sounds like a good place to stage a conference call and have some relaxation to get over it.

Congrats and thanks for sharing.

No doubt this is a great place to take a Rio. We saw several big toms in that 11-12" beard length as thick as a paint brush.

Just a great place with multiple species and a hunt that is tailored to your needs, even if it does include a bit of work on the side!

Thanks everyone for the kind words!

billc said:
Those are some very nice animals. Those rams and goat are top quality trophy's for what I can tell by the pictures. I would have liked to see a few dead coyotes with them though.LOL I am sure gizmo would have liked that to. Great job and one day I hope to head to texas for some turkey at this ranch.
Click to expand...

Wow! This looks like a hunt fir me and my son to make sometime!

CAustin said:
Wow! This looks like a hunt fir me and my son to make sometime!
Click to expand...

He lives in Houston and I'm up in the Kansas City area. So we could both fly into Amarillo and rent a car. Would be good fun!

When does the turkey season start and end in texas. What airport is best to fly in to.

graybird said:
This past week, myself and a couple of clients made the trek to Turkey, TX and the Rockin G Ranch. A couple months ago I posted a thread here on AH asking for recommendations regarding a hog hunt that I could entertain a few customers. A
Click to expand...

It looks as if Africa isn't the only place that having a few extra dollars, in case something that isn't on the menu comes up, is a good idea!

Without a doubt, Royal! Once I saw the quality of the other species in offer, it was all I could do to contain my excitement!

The turkeys are lucky that it was season, or I would have been looking for a shotgun to borrow, as well.