I just found this short write up I did for a friend about a helicopter hog hunt I went on. I thought some of you might have an interest in doing it so, here it is:

The hunt was done by Cedar Ridge Aviation (Cedarridgeaviation.com, or helihoghunts.com). The helicopter was a Richardson R-22 2 place trailered in by the pilot (Shane Williams) on a small 5th wheel flatbed behind a Chevy 3500. It was very tight inside. Shane had taken the doors off for the shoot. The control is in the middle between the two passengers and it was easy to move in the way of it when Shane was making quick maneuvers particularly when right in the trees. He seemed to know what he was doing, but a couple of times we were below the tops of the trees and I was watching the rotors get maybe 10 feet from limbs as we swayed side to side to try to get the hogs out into the open!

Shane was originally from Valdez, AK and likes Texas very much. He learned to fly because his mother worked for an air service in Valdez.

The hunt property was located about 15 miles south of Baird, TX (east of Abilene, TX) on a 10,000 acre portion of a 20,000 acre ranch owned by the same lady who owns the King Ranch. It was a beautiful piece of land with several patches of cultivated fields. It was broken up by washes and creeks where the hogs were mostly located. We saw of course hogs, but also many fine deer, lots of turkeys, 2 coyotes and maybe 8 or 10 coveys of bobwhites. Shane told me that when they started hunting this piece of property they never saw and quail.

I had to use a Remington 870 because of the land owner requirements. 5 shots and it kicked like a mule. 00 buck loads in it. Several times because of the recoil my head would hit the door opening and knock off the headphones.

We took off and landed from the flatbed trailer. It was a pretty windy day, gusts to 18 mph, which made it a little more interesting. 18 mph is the maximum he will fly in due to issues when the wind is coming from the tail end. We had to land after an hour and refuel for the second hour.

The hunt was a two hour hunt during which we saw 25 hogs of which I managed to take 21. I also took 2 coyotes during the second hour. All hogs were taken the first hour and then they just disappeared. Shane thinks they learn to not run when the helicopter comes over.

The coyotes where found the second hour. Coyotes are harder to hit than hogs. I think it took 4 rounds each to finally get them down. They seem to twist and turn more than the hogs.

Basically we would fly over the heavily timbered washes and attempt to see the hogs. Then we would try to spook them out of the timber into more open areas. One group of 7 went into an open field and I managed to take 6 of them losing one when it disappeared into the heavy brush. A pair were chased out of the timber and I managed to take one of them, but the other one disappeared back into the brush never to be seen again. A single was found in the heavy timber and I managed a single head shot on it dropping it in it’s tracks. A group of 4 scrambled up the side of a heavily timbered wash and I managed to get the last and largest of them. Another group was seen in a very deep grassy pasture where we started the chase for them. One shot on the first and it was down. Moving up the line of them 1-4 shots each and they were down for good.

The average was 3 shots each. It doesn’t sound that difficult with a shotgun, but when you are moving one direction and the hogs are moving another it tests you a lot. Also because of the distance the 00 buckshot had a difficult time penetrating enough, or getting enough of the shot into the animal to drop them. A lot of distances may have been pushing 50+ yards. The only ones we got really close to as in 20 yards were the ones in the open fields.

I would highly recommend anyone interested in a different kind of hunt to go on a helicopter hog hunt. Add it to your bucket list!

Let me see, what is next on my bucket list? 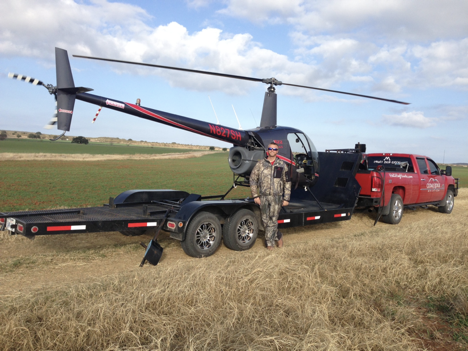 And gets rid of the vermin!

Edge, if you’ve never done it, you should! It was a rush! Not the easiest shooting as shown on TV. You’re constantly moving and not one ran in a straight line in an open field.
Africa on my mind.

Seems like a tight fit but still a lot of fun. There's a four place helo running these trips with full auto ARs and unlimited ammo. Now you're talkin!
"Every man dies. Not every man really lives". William Wallace

You want to watch the game capture boys flying those things to see how close they get to the scenery . ..asked a friend one time what he was looking at on his tail rotor in a quick pit stop...he said just checking as I hit some stuff. . I asked how big...he pointed at a bush bout 4 foot high....hit them when coming in low chasing the animals and flaring/standing the R22 on its tail to push the animals. .he asked me if I wanted to ome up with him...i said no am fine on the ground thanks. . ..next time he came in mid drive to refuel it fell out of the sky as fuel was dirty ....helo was write off and him and person from the ranch were ok after they woke up ... Then had just a small drinking session that lasted till sometime ....

Spike.t, I’ve seen those crazies on TV! Unbelievable what they do!
Africa on my mind.

Thanks for sharing the experience!
John 3:16

I wonder if they will do this out west for them starving horses.

I've seen YouTube videos of guys shooting hogs from a helo.
Never thought of actually doing it myself.
Might be a nice diversion from COVID19.
Thanks for sharing @Ridgewalker
“They that can give up essential liberty to obtain a little temporary safety deserve neither liberty nor safety.” Benjamin Franklin 1759

Nice write-up. Congrats on the hogs and coyotes. Thanks for sharing. Sounds like fun.
Bruce
You must log in or register to reply here.