Went on a pronghorn hunt the first week of October with my 17 yr old son and another dad and son. It was my sons first outing as he has never shown much interest in hunting. He is very involved in High school lacrosse and his friends and the teenage social scene have been a higher priority. Oh to be a teenager again...

Flew from PA to Denver and drove over the mountains to the plains/rolling sage areas north of Craig, CO. A nice drive going up to around the 12k foot elevation. Once over the top and back down the other side near Craig it is not what many would think of for Colorado. Mostly open with rolling hills of sage. You can count the number of trees on one hand. Although mostly flat it is surprising how you can hide and stalk using the terrain to sneak around.

And best of all the antelope are in good numbers. Not like hunting whitetail in my area of NE PA where it is mature forest with low numbers. I was fortunate to start hunting in the 80's when deer were plentiful.

We headed out on day 1 and the action started quickly. The four of us took parked the truck and took a walk up the first hill. We spotted a group of 8 lopes about 500 years ahead. Unfortunately they also saw us. We sat down and glassed them as they slowly circled around us, crossed over into private property and moved off. About an hour later we walked to another ridge top and noticed they kept circling and crossed back over into the parcel we were on. I sent my friend and son to loop around the other direction and set up where they were headed. We noticed a cattle water trough and assumed that was their plan. My son and I then tried to sneak down to them from behind. They got out ahead of us but we're heading straight towards our friends. We watched them steadily getting closer and closer and we're waiting for a shot. Finally when I thought they were on top of them a shot rang out and the buck dropped. My friends son got his goat. One down, four to go 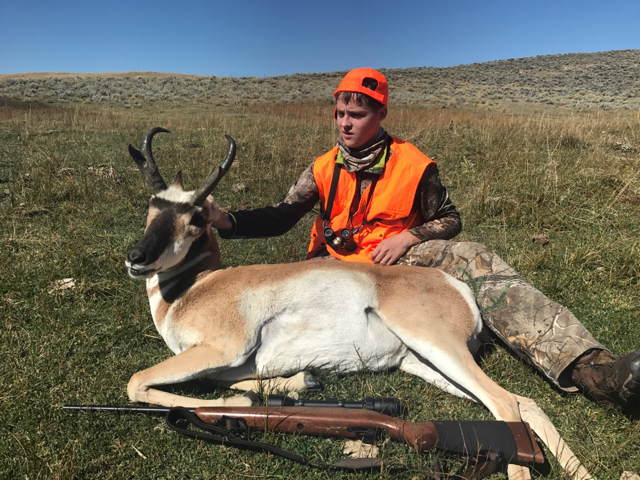 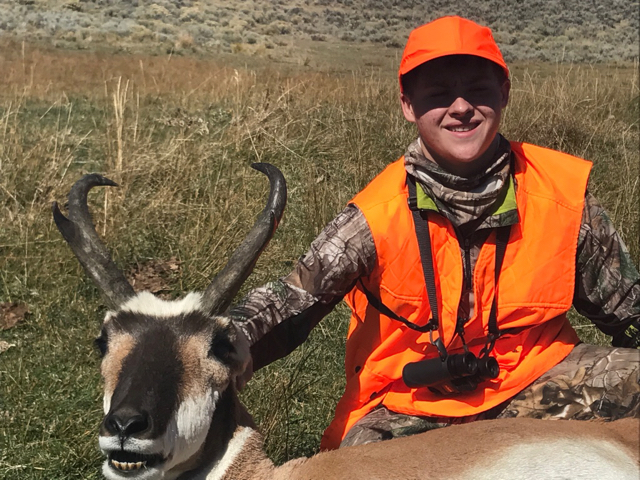 Lee maybe you can interest the young man now in a trip to Africa!

The sun was warm, so we took the antelope to the butcher before heading to another area about 20 miles away. My son would now be the next priority. Arriving at the next location we had high hopes. I have taken a few very good animals here over the years including a slammer two years ago that scored 86". But all I really wanted was a decent one at a reasonable distance for my son. We had practiced a few times at the local range with the 7mm-08 he was using and he did well at 100 yards. But out here most shots are in the 200-300 range. The antelope we took this morning at 50 yards was a rare occurrence.

We parked the truck and snuck over the knoll behind a small cabin as there is an open area in front of the cabin that the goats often feed and bed in. Sure enough there was a single animal beaded in the middle staring our way and it was a buck. We crawled to the cabin and made a plan. There was a small depression that we crawled in around the front and up to a 2-3 foot single sage bush. I set up the trigger sticks on their lowest height and my son sat up and tried to get steady. The wind was in our face and the antelope didn't seem to notice us with the sage in front and cabin behind us. I was waiting for the shot, but my son would stop take a deep breath and shake his head smiling. The range was 215. "I'm all over the place Dad", he said. "No rush", I said, "Take your time". Finally a shot range out and the buck jumped up but was wobbling. It was a good hit. He stumbled about 10 yards and went down. I had him shoot again (actually 2 times as the first was off) but it was over. Antelope #2 was down and the smack talk was starting. Lol. We did have a bet of $5 each to the biggest goat. My son thought his was the biggest so far and was thoughtful enough to tell me he would help me out, if needed, in the next few days... 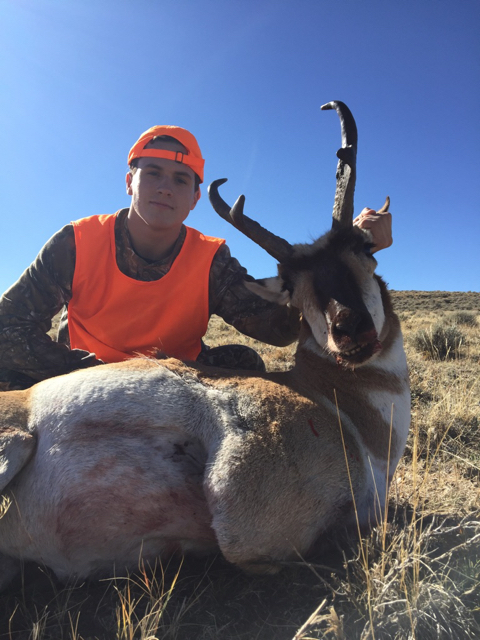 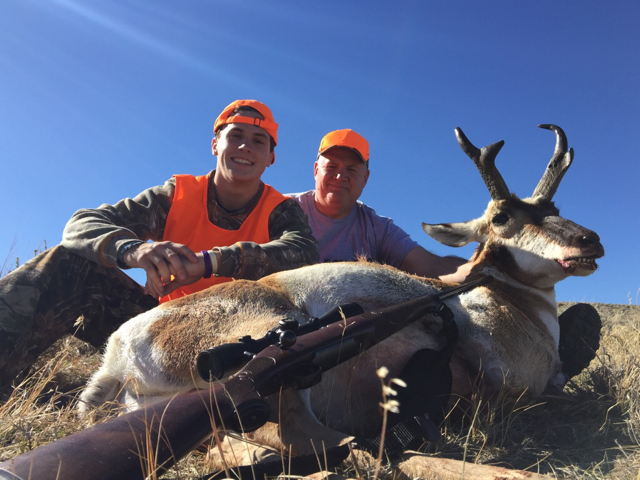 I'll finish up the rest of the hunt in the next few days. We couldn't let the kids show us up...

Nice to have the bar set early. Now you know what you have to beat

Congrats to the young men’s success.

BRICKBURN said:
Nice to have the bar set early. Now you know what you have to beat

Congrats to the young men’s success.
Click to expand...

Exactly! Plus we still had 4 days so no rush.

Also my friend is not very choosy. He is the kind of guy who enjoys the hunt experience and typically lets it rip at the first legal and decent animal that gives him an opportunity. He also tends to use a few more rounds than most on hunting trips. Claims the Colorado air makes his billets curve. Lol

I have talked him out of shooting on the first day of previous 5 day hunts, but it was difficult.

Hide his bolt.
It is a big problem with you forest hunters. Get into the wide open where you can see game animals in numbers and you lose it. Start shooting at the first thing that comes by just like you were still at home hunting a Whitetail.

Yes indeed. We tend to underestimate the distance as it is a clear shot to the animal. Took me a few years with the assistance of a range finder to realize that what looks like 250 yards is sometimes closer to 350 or 400. Need to stay patient, use the terrain and get to inside 200 yard range when possible.

I have killed 2x the deer inside 75 yards in Pa then over that distance. 3 bear and 2 inside 50 yards.

Antelope hunting is my favorite to take newbies and young folks on because they get to see a lot. A 50 yard shot is amazingly close! Not sure I’ve ever taken one as close as 200 yards!
OK let’s see how the dads can do. I’m hooked to hear/see the final tally!
Africa on my mind.

Congrats so far, nice speed goats! I want to hunt another one of these in the worst way!!
John 3:16 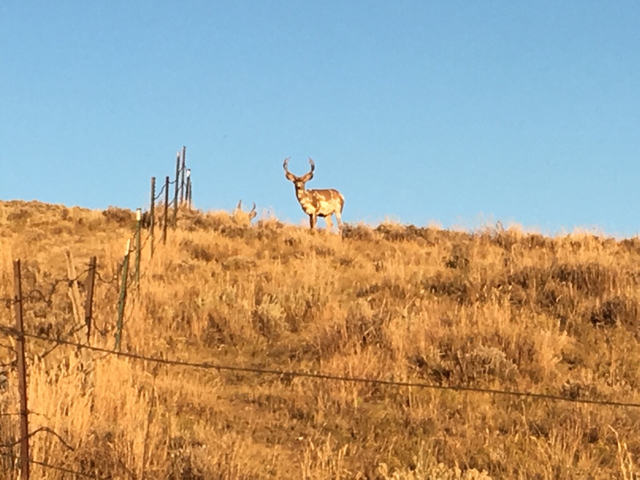 Pretty cool. I had seen him the year before as a small fork horn. Pretty unique.

Wow, what a cool sighting! Never seen any pics of muley like that, only WT.
John 3:16

Day 2
We didn't go out early as we had to head to the butcher which opened at 8 am. And the boys had to have their mcgriddle breakfast of course. Nothing like good nutrition to start the day! On the way out to the land we would hunt the smack talk started. My son said, don't worry Dad I'll share some meat with you if you don't get one". I thanked both of them for removing / culling the 2 small ones from the herd. They sometimes stand in the way of the bigger bucks. Lol

We drove the perimeter of the property we were hunting looking for goats. It is surrounded by 1000's of acres of blm. At the top corner we parked and snuck over the hill. There we saw a nice buck a long way off (1000 yards?) and amazingly he was staring right at us. He may have been watching the truck circle the property and focusing on the location where is dipped under the hill. He started moving away from us. We decided to go back to the track and continue the wide loop around the perimeter trying to get around him. We did this and bumped another single good buck who followed in his general direction. Once around the property. we parked and I sent my friend toward the area they were headed. I was going to circle farther around to try to head of any fleeing animal. Our sons were manning the shooting sticks.

I crept along and was waiting for a shot. At one point a bumped a buck to my left. I realized I wasn't really concentrating on the land to my left as the 2 we were following were to the right. Time to refocus and hunt. I stopped at a small ridge and again waited for a shot to my right. Nothing... I walked/peaked over the ridge and there was a buck bedded in the sage at 300 yards. It looked bigger then the one I just bumped but not quite the size of the 2 we were following. Was this another different buck? Confusion but in a good way. I couldn't get a good look at him as the sage was thick. No rush I thought as we had 3.5 more days. We stood up and kept walking parallel to the buck. He stayed out. Finally he stood up but was staring straight at us with the sun making it hard to see him. My son said Dad he looks pretty good. U was unsure and a little blinded by the sun angle so I passed. He then moved off to the right dipped down a hill before reappearing 30 yards away. I could now see decent prongs and dropped to the sage to try to get some king of rest and a lookthru the scope. He moved off to the right and just before he looked to be starting a trot I fired. My son said you missed as he saw the dirt explode on a little rise 20 yards behind the buck. He followed that up with a "nice try Dad".

I asked him where did the buck run? All the while knowing the answer. He said I don't know? It was pretty open around us and we were on a knoll so anything fleeing we would see once it got to 100 yards away. We walked to the area we last saw him and there he lay. I had seen him fall at the shot. A few mins my friend and his son came over the hill. If course the two 17 year olds had to check the horns. The picked up the head, looked at me and said, "You suck". Too funny! I did follow up with a few jabs as well.

He was pretty nice and had all his prongs and decent curl. Some of the lopes have broken prong and are worn on the tips due to rutting on this land, so you have to be careful before shooting if that bothers you 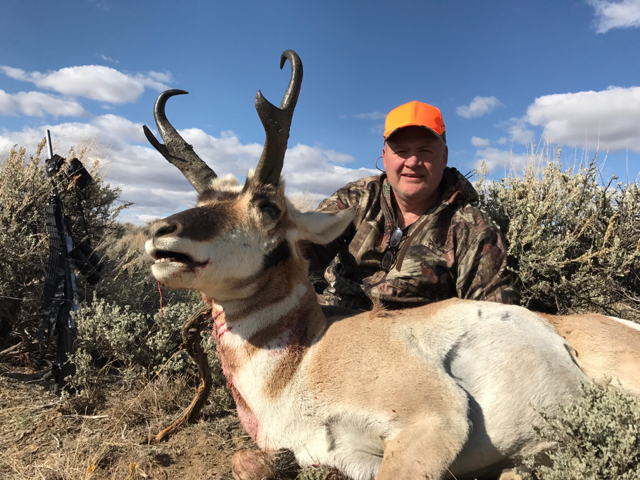 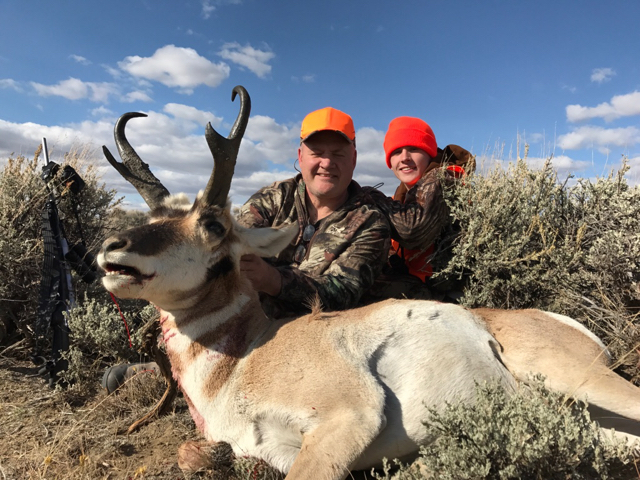 My friend also gave me some ribbing telling me I sent him the wrong way so I could shot this one. Lol. But then he admitted he saw 1 of the 2 we were following. It had turned back and was going up the other side of the property. I asked if it was a shooter and he said no question.
You must log in or register to reply here.