October 23rd brought the opening weekend of muzzleloader season to Oklahoma, so I made the 4 hour drive North from Austin to Oklahoma with the appropriate weaponry...

I try to use this 9 day season to take a cull buck out of the heard before he has a chance to pass on his genetics in the coming rut; as well as filling the freezer with meat by taking doe as well.

Opening morning Saturday 23 October, found me in the North blind on my farm, armed with my T/C .50cal and a Yeti thermos, unfortunately watching two young bucks that I didn't want to shoot and enjoying my tea while watching a doe walking 175yds away was all the excitement for the morning, so I packed up and headed to my cousin's ranch.

That evening I was planning on hunting my farm, but I was hanging around my cousins ranch house during the day and everyone that was hunting his ranch started discussing where they were going to hunt that evening, it was mentioned that the ranch managers family was in visiting and they wanted some deer meat to take home, so if possible shoot some of the many doe that the ranch has DMAP tags for.... Plans were changed and I went to a stand on my cousins ranch and arrived at 4:45 PM parked my truck and walked into the blind.

After running some cows off from the freshly cut field and getting into the blind, the usual routine of checking for wasp nests then getting out the rangefinder and binoculars and before I can even get my binoculars on I have a doe come in skirting the timber edge of the field where the blind sits and she is feeding toward me and not offering a good shot opportunity.

She finally turned when she got to the base of the blind and at a range of 15 yards I had her broadside with the cross hairs centered in her shoulder as I squeeze and BOOM the slow lurching recoil of the T/C .50cal pushes me and the doe vanishes as the air fills with white smoke, I pull the ram rod and reach for my speed loader and starter preparing for a second shot if wounded and still visible... but as the smoke clears, I see that a second shot is not needed as she is down and legs up having been barrel rolled by the impact.

I start the process for reloading - Swab the bore with a dry patch, take out the breech plug and wipe off fouling from flash hole and replace in gun, open the speed loader tube and dump the 3 pellets of propellent down the bore and seat the bullet in the sabot and insert into the rifling at the muzzle; then take your starter and use the short start to seat the sabot into the rifling, then use the long starter side to push it the first 4-5" down the bore and then the ram rod is used to push the bullet and sabot down the barrel and firmly on top of the powder..... replace the 209 primer in the rear and your ready for the second shot.

After reloading and a quick trip out of the blind to drag the first doe out of the freshly cut field and stash her body in some tall grass out of site and then it's back into the blind since the evening is early.

Then a couple of young bucks come out eating in the field and then another large doe closed to 73 yards and another BOOM and smoke cloud from the T/C and out from the smoke I see the doe running in a wide loop; I can see the exit would is severe and leaving a good blood trail, she runs 50yds and falls in talls grass close to the ranch road, I'm happy she lands hidden and close to the road......as I start the reloading process again, I look at my watch and its 5:45pm

As I'm reloading again things quiet down and soon i'm surrounded by deer, two young 10 point bucks have my attention but there are several other young bucks and a pair of twin doe fawns in the field, when I notice the two young bucks look in my direction as if something is behind me I turn and see a massive bodied buck with horns, range finder says 130yds but I can't believe the size of him and through the binos I can see he's got 3 points on one side and 4 on the other and for his size and age that means he is a cull and closing in head on.

I look him over another couple of times as he closes in to 75yds and finally turns broadside.....BOOM goes the T/C and I see him come out of the smoke and he's losing blood like a fire hose; I'm confident in the shot but I'm still getting that gun loaded as fast as I can while he runs full speed in a wide loop and crashes into the tall grass 10yds from where doe #2 was laying and he's down hard. I place another primer in the gun and check my watch 6:45pm - still another half hour of shooting light left, but I've got 3 deer down and plenty of work to do.

As I walk up to the buck I can tell that I am going to need some help loading.... 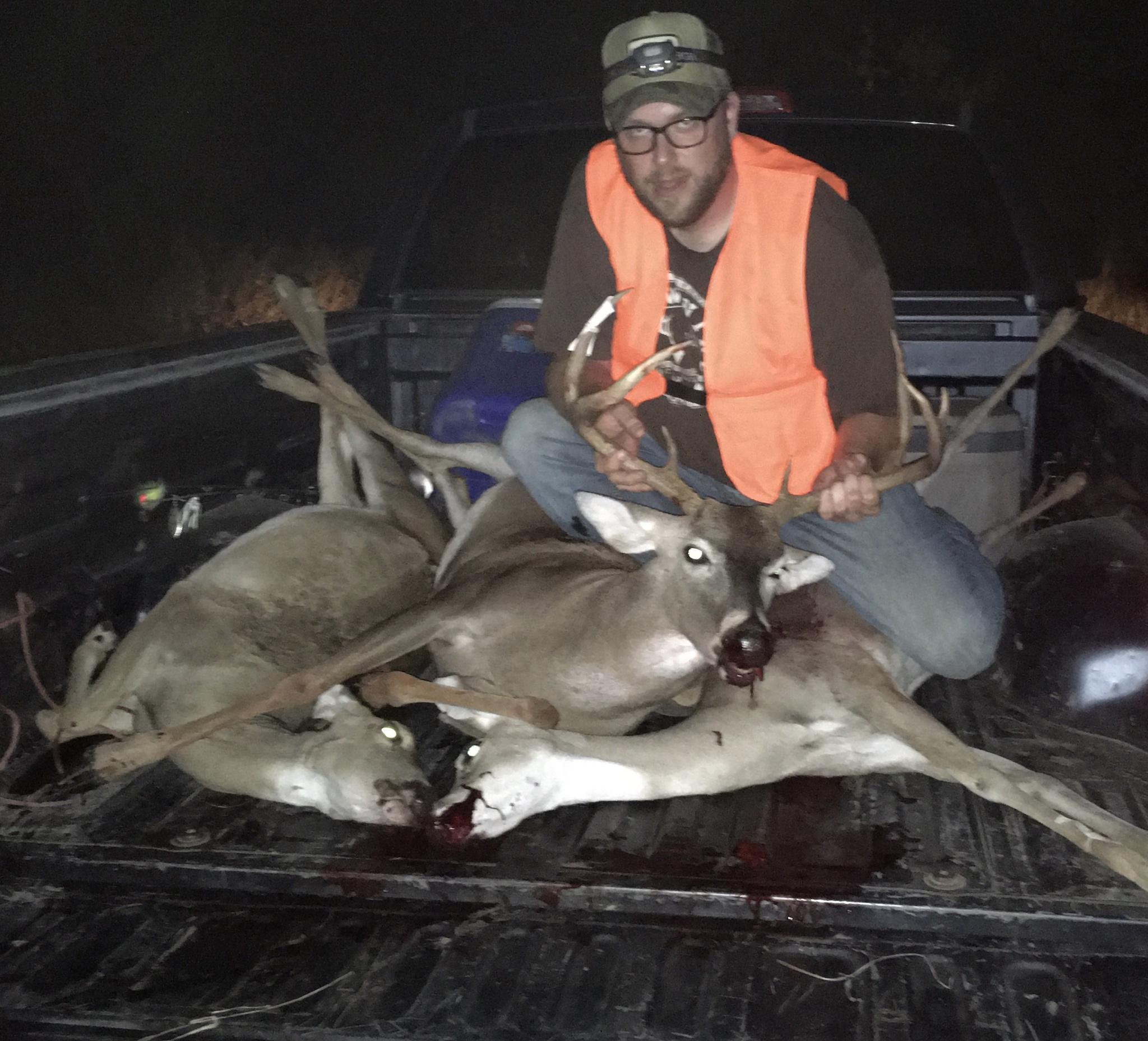 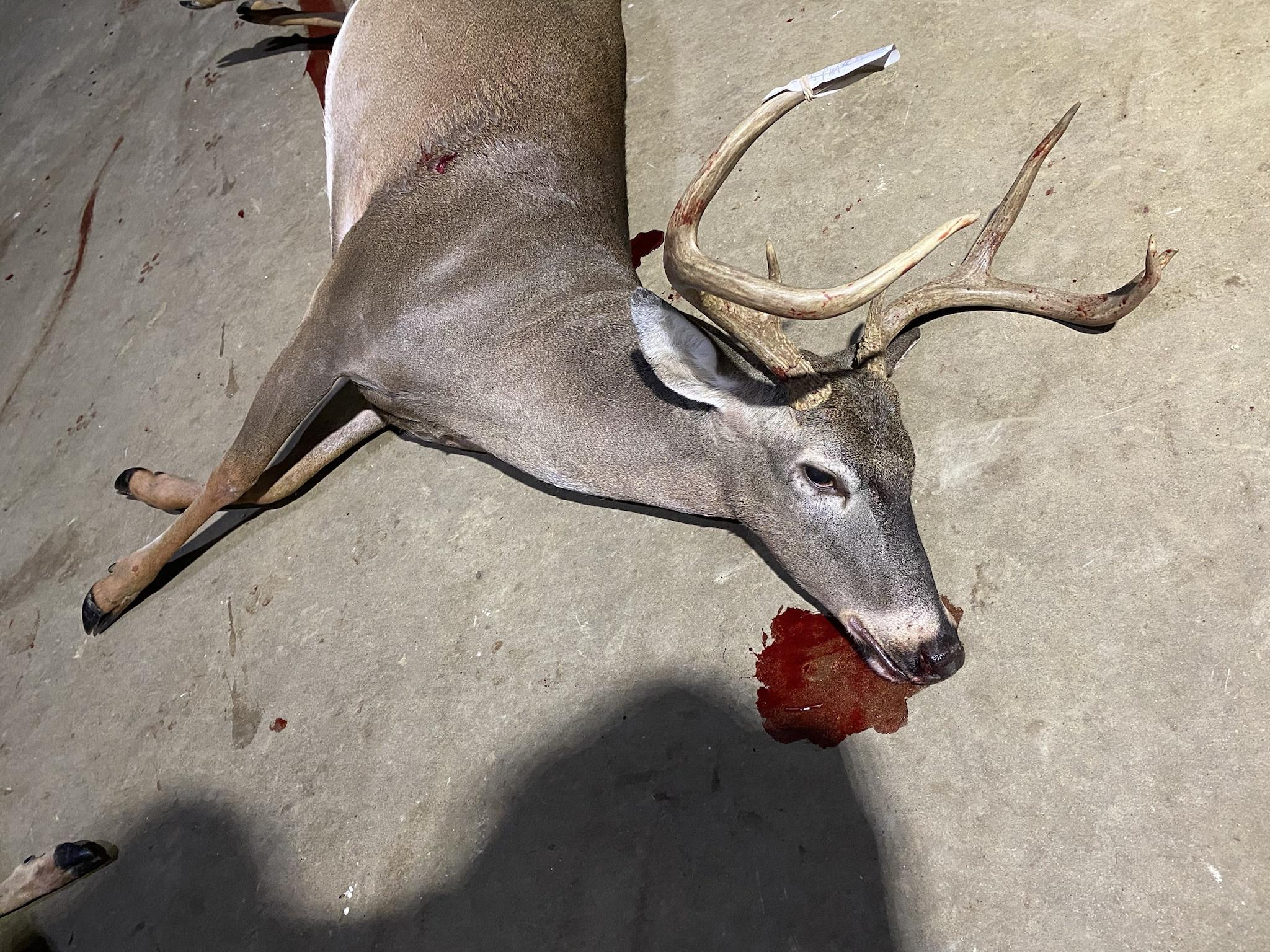 Monday morning I got up and dropped another 2 doe by 7:30am and had them on ice and breakfast cooked and eaten by 11am

Monday evening I had 27 doe in front of me and several bucks with a HUGE boar hog 300yds away and I was hoping he would feed to within range of 200yds because I wanted to empty my muzzleloader that evening and clean it before loading up for the drive home in the morning and what better way than to empty it into a pig and only 15min of shooting light remained..... then all of a sudden every animal panics and runs off the field as my cousin drives past me in his range rover!

I give him the finger and send him hateful text messages because I told him I was hunting there; he apologizes and I start packing up when then animals come back, 4 young but large bucks that need another 2-3 years; it's growing darker by the minute and with just 3 min of legal shooting light left all the deer run off again, but this time it's no Range Rover - it's a pig, not a huge one... maybe 100lbs, but it will do just fine, I take aim, turn on my flashlight for certain and BOOM the white smoke comes again, along with the death squeal of a pig.


One final thing - I remember reading a post on muzzleloaders and I believe it was Redleg who said something to the effect of "Most muzzleloader bullets in sabots are glorified pistol bullets and not effective".....
and I wholeheartedly agreed with that statement until I started using BARNES T-EZ spitfire 250gr muzzleloader bullets, I've been using them for 10+ years now and I will never use anything else.
Last edited by a moderator: Nov 5, 2021

Good job. Congrats on getting it done. You sure whacked and stacked them!!!
Bruce

Excellent! oh envy!
Africa on my mind.
You must log in or register to reply here.

USA: Christmas Present For My Wife

USA: A Young Hunter Gets His First Animals
2

H
hunt 65 James Adamson hunt 65 wrote on James Adamson's profile.
what is the asking price for gun and ammo?? thanks.
Monday at 4:20 PM •••
G
Gerry Addison AfricaHunting.com Gerry Addison wrote on AfricaHunting.com's profile.
I would like to delete my last post on the the thread where to hunt big cape buffalo. I haven't been to that area for a few years and it may be very different now. Not fair of me to post this.
Friday at 7:53 AM •••
J
jpallister
Montana hunter and avid sportsman.
Jan 31, 2023 •••