I always seem to find some kind of controversy no matter what path I take. Last year I was keen to go on a mountain lion hunt and booked a hunt in New Mexico with Global Sporting Safaris for this year. Being about 7 hours drive from the hunting area I booked this hunt to be an on call hunt so that I could be hunting as the first snow fell. The agent I worked with was Damon Engel and the owner of GSS was Rick Kennerknect. During the last year and specifically sometime around August, GSS went out of business taking everyones deposit down with them.
I posted about this at the time: https://www.africahunting.com/threads/agent-ripped-off.51980/

After speaking to David Martinez, the outfitter and owner of DMV Outfitters in Espanola, NM, we decided to keep the hunt on schedule. We were hoping to get some of my deposit back from GSS as there was still some time left. As the hunt approached I realized that David was a standup guy and he was going to absorb the lost deposit and allow my hunt to continue as planned. I don't know that most people would do this.
Over Thanksgiving David had called me and texted me pics of some cats that they had run that week as they were getting the dogs some working time in. The snow had fallen quite a bit in places but very little in others. He said I should leave the day after Thanksgiving and we would hunt Saturday morning. After clearing this departure with my lovely wife and family I packed up and got everything ready. Friday evening I met up with the outfitter at my hotel and we made plans for the morning hunt. He picked me up at 5:30AM and we drove about an hour and a half up into the mountains North of Espanola. His two sons and others will go out in the night and look for tracks in the mountains. When they find a large track they will wait there with the hounds until everyone arrives. The wind overnight had blown dead trees in the road and we had to move a few out of the way. We slipped and slided in the deep snow not knowing where we were going. We could not get either of his sons on the phone or radio. We weren't lost but we had no idea where we were going! Finally his son Vince phoned us as he had trouble with his brakes an had to head back to town. He relayed to us where his other son Michael and the hounds were and that he was certain it was a big tom. He also told us we could not keep going the way we were trying to go to get off the mountain as a big tree was blocking the road. David said to him "we barely made it this far and now you're telling me we have to go back through all that deep snow?". Vince said "yes either that or get out the chain saw and cut this big tree that is blocking the road!" What to do..... We decided to try to stay in our tracks and go back through the deep snow on top of the mountain and then head toward Michael and the hounds. Finally arriving at the location where the big cat had crossed the road in the night it was already 10AM. Now the fun begins as we get to see these fantastic hounds do their thing. It was 18 degrees and forecast to have quite a bit of wind. There was about a foot of snow in this area and the forest was dense and had quite a bit of thorn bushes in addition to everything else. As the hounds work the tracks we get everything ready to go. The climb was very steep and difficult but Michael says it's only 3/4 of a mile to where the hounds are. Well let me tell you this was the longest, hardest, and most difficult 3/4 of a mile I've seen in a long time! The high altitude is kicking my butt and I am trying my best to keep up with these '20 somethings in this 18 degree weather. The only good thing was that the wind never got up like we were expecting it to.
It seemed like forever but we finally arrived to where the hounds had the big tom treed. I marvel at this great creature and prepare for a shot with my .45/70. I try to shoot but nothing. I check the safety and double check that I am loaded and nothing. The gun is frozen up somehow. Michael says I can use his .45 so I take a shot and the can bales out of the tree hit but not that well. We get back on him and get my gun unloaded and dry fired to ensure it is not frozen and finally the cat is mine.
This hunt was exciting and in an extremely scenic place in the mountains of New Mexico. I can say with confidence that David Martinez and his sons are not only great hunters but also great people. I can highly recommend DMV Outfitters for lion and bear hunts in New Mexico. 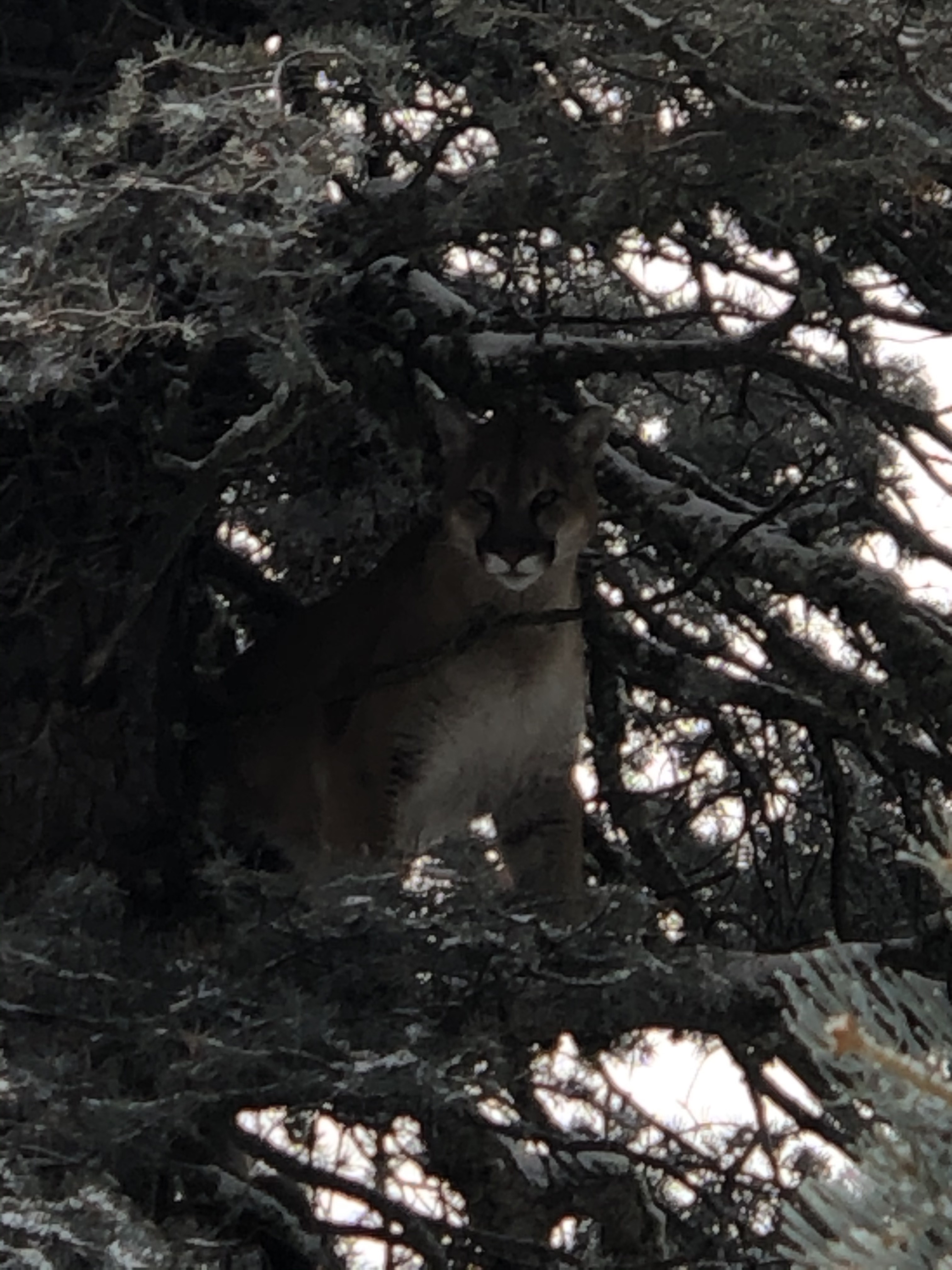 Philip, I am so envious! I’ve tried 3 times for a cougar (NM, Utah, Nevada) as well as attempted many times to call one in in my state of Colorado. They don’t stay treed as long as people say. I’m old and slow which doesn’t help.
Congratulations on a successful puma hunt!
Best
Phil
Africa on my mind.

Congratulations on a nice cat.
The mountains with 12" of snow is an adventure in it self, driving and hiking.
Was your gun warm in the truck and than got snow on it shortly after getting out possibly?
I have seen this freeze them up more than once
Mike .257

Mike Van Horn said:
Congratulations on a nice cat.
The mountains with 12" of snow is an adventure in it self, driving and hiking.
Was your gun warm in the truck and than got snow on it shortly after getting out possibly?
I have seen this freeze them up more than once
Click to expand...

I guess the gun was warm from being in the truck then into 18 degree weather. I assume going under snow covered trees got snow on it and somehow it froze up. It was a total surprise to me and I still don’t know how it happened.

Ridgewalker said:
Philip, I am so envious! I’ve tried 3 times for a cougar (NM, Utah, Nevada) as well as attempted many times to call one in in my state of Colorado. They don’t stay treed as long as people say. I’m old and slow which doesn’t help.
Congratulations on a successful puma hunt!
Best
Phil
Click to expand...

Ridgewalker I think you should contact David and see if you can hunt with him. I’m sure they don’t all go into as tough of a spot as we had to get to.

That’s awesome congrats! I did a hunt in NM for my lion and was a great adventure. Awesome state to get a cat. Glad it all worked out.

Excellent cat n story!
I've taken 1 with dogs clear back in 97 here in colorado. Used a 45 colt.
Not sure I could keep up the pace anymore to run one down

Beautiful cat. Congrats. Sounds like an "on call" hunt is a great way to do one like this.
Bruce

Great cat Philip! Way to get it done....i really need to get on one in the near future as everyone I've spoken with says it's a hellofva good hunt.
Nathan T.

Beautiful cat and story. Congrats! I hope to do it one of these days.
Ed

Nothing like trudging uphill in deep snow to provide exercise for your hunt.
Congrats on making it and getting your cat.

Glad the Outfitter was a stand up guy about the deposit. Plenty could not handle that kind of discount.

Congrats on a beautiful cat-one of my favorite things to do! There is something very special in the hearts of the hound dogs. Glad you were successful and thanks for the post.

Congratulations on a beautiful cat! I’m in Montana anxiously waiting for this snow storm so I can hear the hounds myself!
"Montana seems to be what a small boy would think Texas is like from hearing Texans" John Steinbeck

@Philip Glass enjoyed reading your report and congratulations on that big cat! I don't know about you, but when I read the part about your rifle not firing, I had a flashback to your leopard hunt report. Happy to hear nobody met the cat up close and personal. Look forward to seeing a photo of this critter in your trophy room.

Awesome experience and what a great cat! Congrats overall on the write-up, pics and a beautiful trophy! On my bucket list.

The rifle not firing is really quite common when one is hunting in the cold.

You keep your rifle in your home where there is humidity, you then ride to where you are going to be hunting and the moisture starts to condense in the action, not much but enough. You then get out into freezing temperatures and the moisture freezes turning a rifle into a club.

Nice cat, I keep thinking of chasing after one but other things just keep getting in the way.
If you don't care where you are, you are not lost.

Phil that was a great hunt and a even better trophy. The outfitter working with you as he did will no doubt bring him some positive press. Cold weather hunting requires some special gun handling. Things like little to no lubrication, don't bring a cold gun inside without making sure it is 100% dried out or the condensation that forms will just freeze and lock up the action. Although you personally may be aware of these things I thought other warm weather hunters might benefit from my comments.

BTW your photo of that treed cat is absolutely stunning. You should get that photo hand painted and professionally mounted. I would if it were mine!!
You must log in or register to reply here.