I just got back from hunting unit 23 in New Mexico Gila National Forest. I hunted with Gila and Apache Outfitters in Reserve, NM.
I had put in for an archery hunt in 16a and muzzleloader in 15 as 1st and 2nd choices with a rifle hunt in 23 as 3rd choice.
I also purchased a bear tag.

Weather was not good. highs in the 80s. Elk were not moving much in the evenings until just before dark.

Day 1- We saw a smallish 6x6 and a few cows fairly high up but close. chose not to pursue. In the afternoon we saw a large shooter over a mile away, but too late to pursue.

Day 2- We went to the area of the large bull to try to catch him moving back up but no sight of him or anything else. checked other places but saw nothing else. In the afternoon, we glassed a couple other places altogether and saw no elk at all.

Day 3-
Morning- went back to the place from Day 1 and saw nothing at the normal glassing place, so hiked a long way up and down and up and down. (about killed me). Got to a new glassing area and glassed a long time seeing nothing. My guide, Justin, asked me about going to another ridge across and higher up while I continued to glass where I was. He wanted to check the bowl area we couldn't see.
He got back, we were going to rest 15 minutes and leave so I walked off 10 yards and peed. I came back and sat down on the other side of him. 10 minutes later we heard bushes being brushed and then a lot of loud sniffing in the dirt where I had peed. I couldn't see it because of the junipers and shrubs but Justin said it was a bear and laid down and told me that if he took a few more steps and came into view to shoot over him to kill the bear. Would have been an 8 ft shot, lol. It wasn't meant to be, though, as the bear never materialized, just heard it walk off.

Evening- We were told by another guide about seeing an elk that his clients couldn't get to or something so we went there. My hunting partner and his guide also happened to show up there so we decided to pursue together and made a plan. We came from the back side of the mountain they were seen on, but bumped them out of their beds late. they just weren't moving in the afternoons until very late. We split up and covered different areas. Justin and I saw nothing, but my friend and his guide saw a nice bull at 500 plus yds. After running to get to a place to shoot, the bull was just about to go over the mountaintop. He was out of breath and had to take a very quick shot (or wouldn't get a shot as the bull was just about to go over the mountain). He shot between 2 deep chest heaves, but cleanly missed him. They spent half the next day making sure it was a clean miss and it was.

Day 4- We hiked back in to the nasty far away spot where I had the bear encounter. We wanted to be at that spot glassing early for elk and might get a bear if lucky. At 8:15, a cow called and Justin called back to it a few minutes but nothing.
At 8:45, the cow called again at the bottom of the gully to my left and Justin started calling aggressively. With him glassing in that direction (left), I was watching the final mountainside straight ahead of us. Quickly a bull appeared at what I guessed was 200 yards. I said "Bull, straight ahead". Just turned and saw him and said 180 yds and was about to put up sticks, but he barely said 180...... as I was pulling the trigger. The bull rolled down the hill a ways and was dead.

We got to the bull and realized the wicked haulout in front of us (actually "him" lol). We took off the legs on one side and I told him I would continue cutting him up as he started hauling out meat. While he was gone, I had gotten out the backstraps, loins and flipped the elk. I was caping up near the jaw when I heard something 20-30 yards away, but it stopped. It was very thick and couldn't see what it was. I went back to work on the cape. Then, I heard the same sniffing/breathing noises we had heard the day before and I scrambled uphill to get my rifle. He must have seen/heard me because he disappeared. It took us the rest of the day to get out of there.

I didn't get my bear, but the elk is a 6x6 with a 3 inch or so kicker on the left side eye guard. Many of the tips are broken. About 4 to 6 inches of the last 2 points on the right side are broken off. 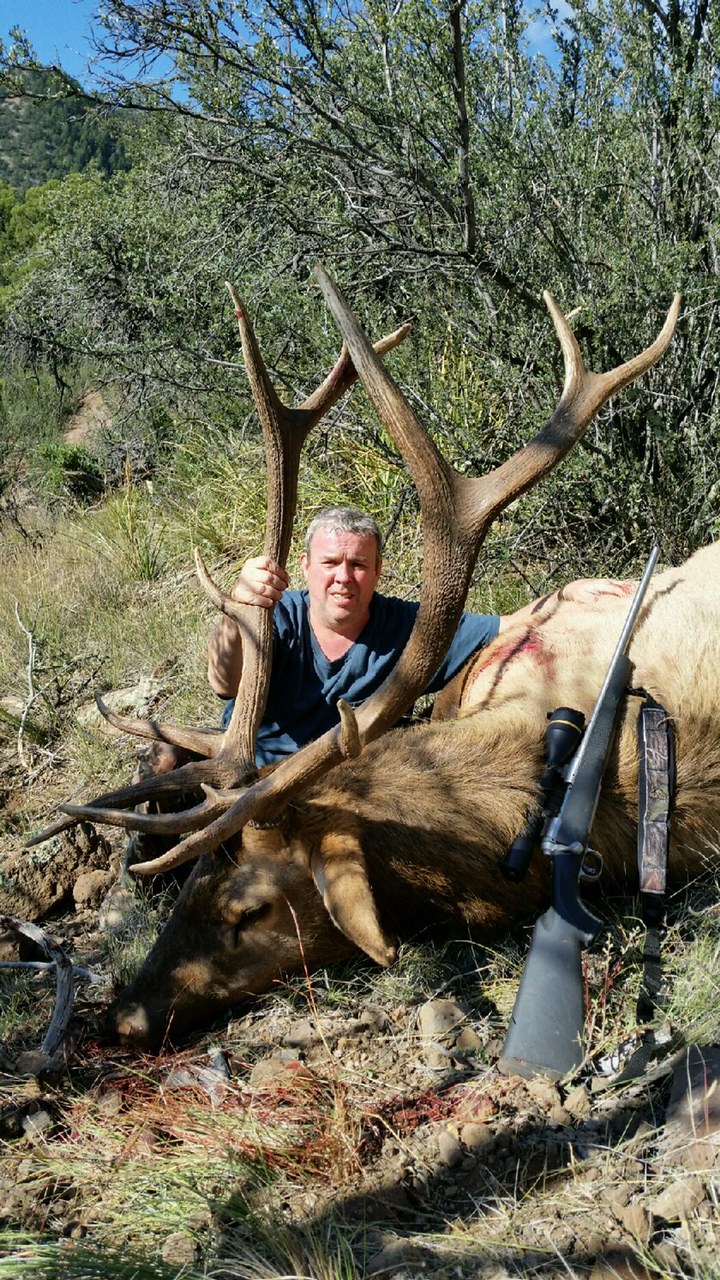 My first elk and I am very happy with him. I hope to get drawn in the better units across the highway and go back on an archery hunt in the future. I would have no reservations about hunting with Gila and Apache Outfitters again.

Review of Gila and Apache Outfitters.
1. Owner- Michael DelaO- I like him a lot. I believe he is honest and cares about his clients. His 14 yr old son had drawn a very coveted tag and was guiding him, so I didn't see him that much, though.

2. The Lodge- It was clean and adequate. Nothing fancy. Plenty of room in the living room, dining room, etc.... but I was too tired to stay up and watch TV after hunting. If you are looking for a majestic log cabin type lodge with all the fancy stuff, this isn't it. I came to hunt, though, and not sit around in a fancy lodge. My partner and I shared a room and had our own bathroom. There were 8 hunters there.

3. The Food- His Mom is the cook and a very good cook she is. Usually 2 giant homemade breakfast burritos (I could only eat 1 each morning). Sack lunches were made so we could stay in the field all day. Dinner was very good and plentiful. Again, nothing fancy, but very good. Homestyle cooking.

4. My guide. My guide was Justin. About 21 yrs old and strong as a bull. He worked very hard to get me my elk. He seemed to know unit 23 very well. It is the hardest unit to hunt in the area. He took great bulls during archery. I plan to only apply for archery tags in the future and will insist on having Justin as my guide.

So, as you can tell, I do recommend this outfit and especially the guide I used.
Last edited: Oct 28, 2016

Very nice bull, broken tips I'm sure from battles in the rut. I can't recommend an archery hunt during the September rut strong enough. Lower likelihood of success but being out when they're bugling makes up for that and more. Congrats!

Oh yeah, the last morning my friend and his guide had a shooter bull bugling at 100 or so yards just before legal shooting time. Easy shot but couldn't take it. They chased that bull until 12:30 getting close to getting a shot 3 or 4 times but finally he gave them the slip after a 5-6 hour chase. At one point he got him in his scope again as a moving blur and didn't take it because he didn't want to risk just wounding him.

I'm hunting in CO right now and the elk have been few and far between.

Bears are hard to see here unless a great acorn crop, which they had this year. Too bad I didn't get a bear tag as I've seen two and could have shot both. I had to yell at the first one as he was less than 20 yards away and was coming up the trail I was going down. Sounds like you got even closer though!
HUNTERS make importation bans work!

yeah, less than needed to get a first down in football.
I hope you see and get your bull.

Very nice bull, congrats and thanks for sharing!
John 3:16

Congratulations on your Elk.

Elk are rarely taken in "nice spots". Nice to have someone to do the packing for sure.

All that practice to get a shot off within three seconds seemed to work.

nice bull and that is a good one for unit 23. I hope to draw a tag in new mexico again next year as not hunting elk this year has me wanting to chase some next year bad.

Thanks for sharing your hunt report, and congratulations on a great Elk.
Paul Truccolo.

Yes. It is the Savage 300. Bullet went through both lungs and lodged just under the skin on opposite shoulder.

Hey, Marius, you mentioned wanting to one day hunt a "classic" North American animal.
I think I told you that you should hunt a whitetail....... Let me change that to "you should hunt an elk".

Elk is fun, congrats on your success! Elk meat is wonderful!

Savage Hunter said:
Hey, Marius, you mentioned wanting to one day hunt a "classic" North American animal.
I think I told you that you should hunt a whitetail....... Let me change that to "you should hunt an elk".
Click to expand...