Some of you saw my post and/or offered advice about me taking my nephew on his first hunt. The day after Christmas, the hunt happened and went great.

Little backstory, my nephew dosnt have a father figure other than my Father (his grandfather) and myself. Therefore I have always tried to do as much "manly" stuff with him. Work with him on sports, take him to car shows, bought him his first 22cal, etc. The last couple of years he has become fascinated by the different Alaskan shows and started asking about going hunting with me. I asked his mother about taking him to Florida for a hog hunt for Christmas, and of course she told him that immediately... Suprise ruined but we were able to start practicing with a purpose. We started him out with a PSA AR in 223 which he loved due to being afraid of load noise of bigger calibers. We spent alot of time at the range with his 22 as well as the AR and he shot really well. 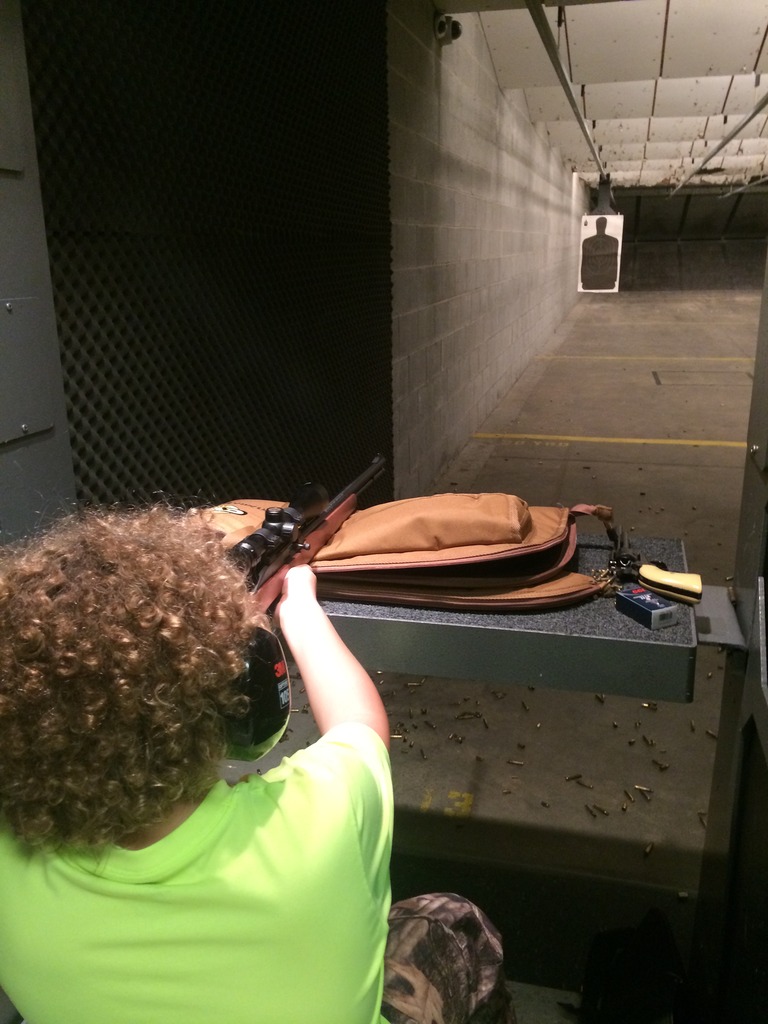 Fast forward to Christmas day and we are in the car headed down to Perry, Fl around 11am. The following morning I "rented" a 44mag single shot from the hog place for my nephew to try at the range. Hoping for better stopping power if makes a marginal shot. First three shots miss paper at 25 yds and I start sweating... This is going to be a bad day... I grab the AR from the truck and he put three in the bullseye, AR it is. My father decided last minute he wanted to come on the hunt, which was a welcome addition. The three of us head out to the elevated box blind. 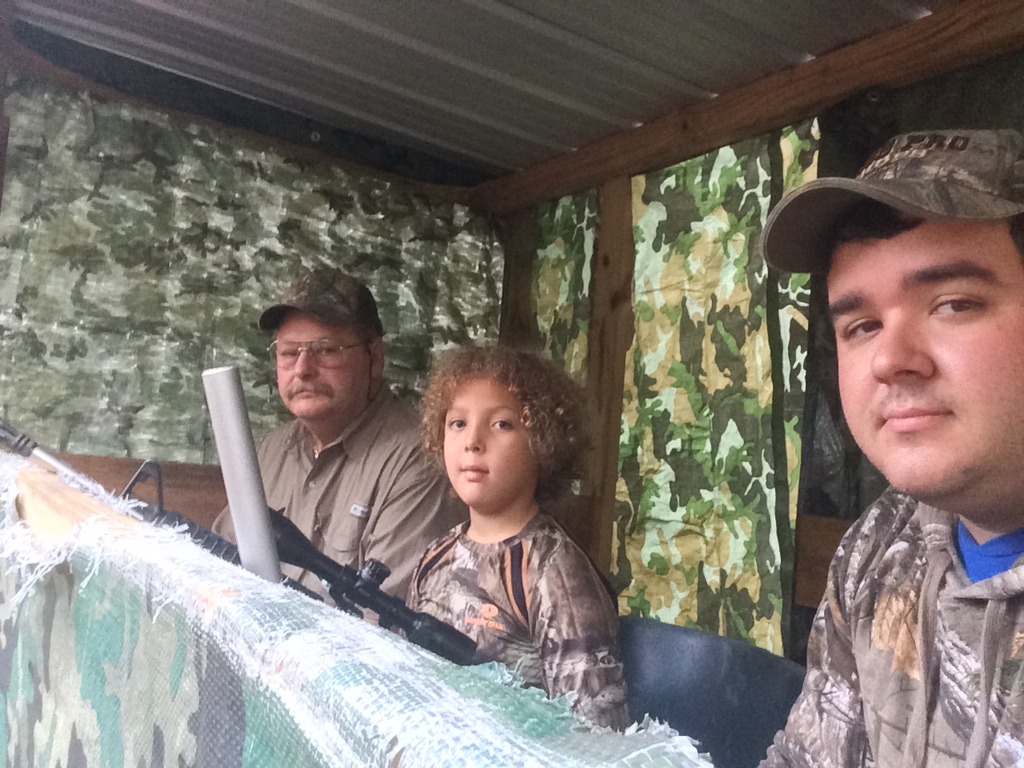 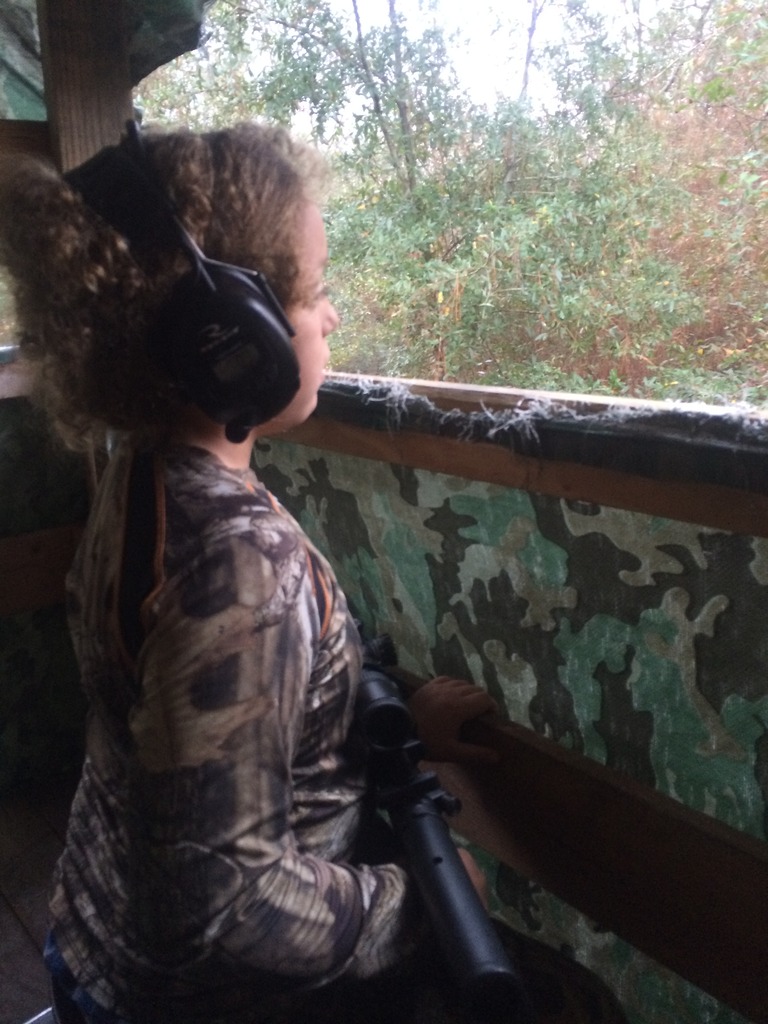 First thing I realize, this kid cant stay quiet. I never hunt with two people so this is a new problem for me. He's moving his feet on a wood floor covered in sand, moving his chair, coughing, and managed to drop the gun twice. Very interesting. The feeder kicks on and two mins later the pigs come in. Now the kids excited and the moving/noise making begins. It dosnt bother me too much, bothers my father a good amount (he's impatient by nature and not a hunter), and really makes the pigs unhappy. The pigs spook off 4 times and each time the ones that return are smaller and more spooked. After the 4th spook, I realize we cant be that picky anymore and ask my nephew if he likes one. He finds one he like the look of and I set up to back him up with my 30 06. The pig comes in to about 15yds and stops broadside, my nephew makes some noise getting on the pig which spooks it but it dosn't run off. He says "i'm going to shoot" I nod, and I watch in my scope that he makes a perfect heart shot and the pig drops where it stands, and never moves again. My nephew asks if needs to shoot it again when its back leg twitched, I said no and said "lets go down and take a look" which he responded to with "lets wait". Turns out that my father had been showing him videos on youtube of pig hunts and of course most of them were of pigs knocking hunters down. I convince him we are fine and we climb down. We take pictures back at the skinning shed and he asks the skinner to help gut the pig. 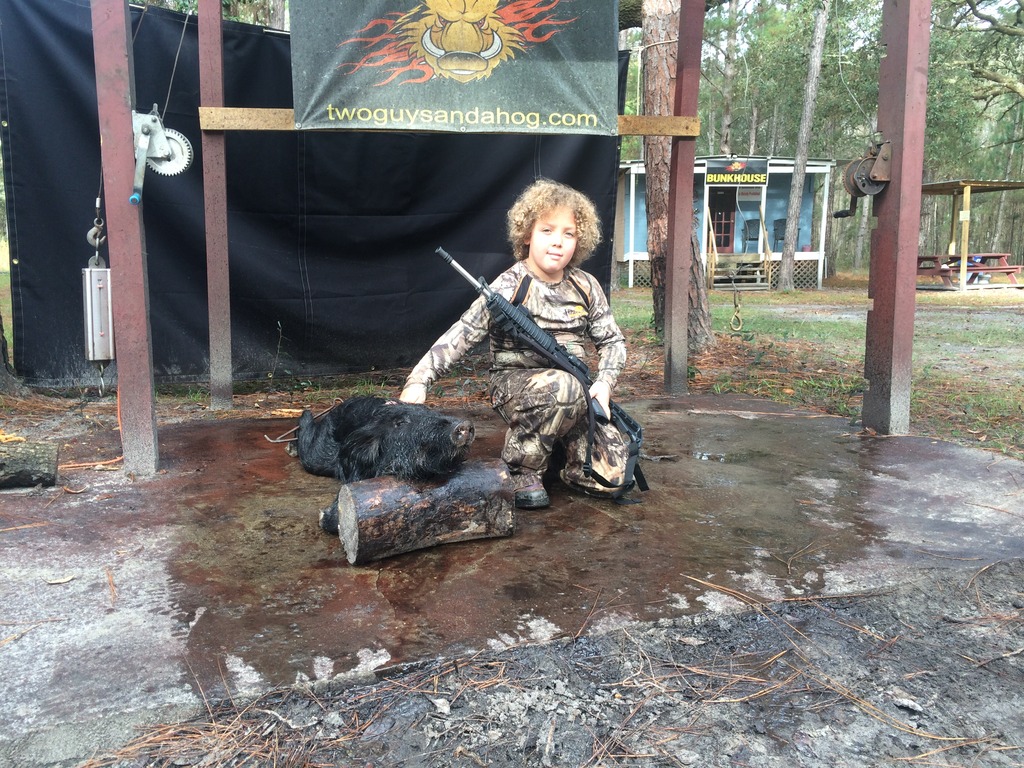 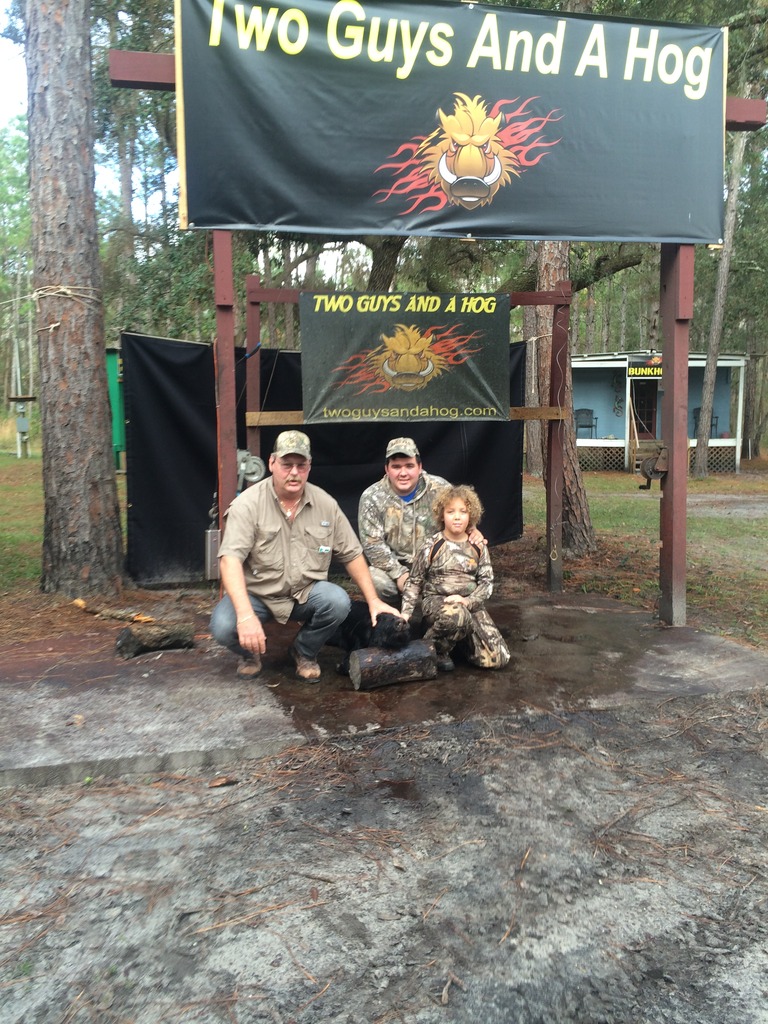 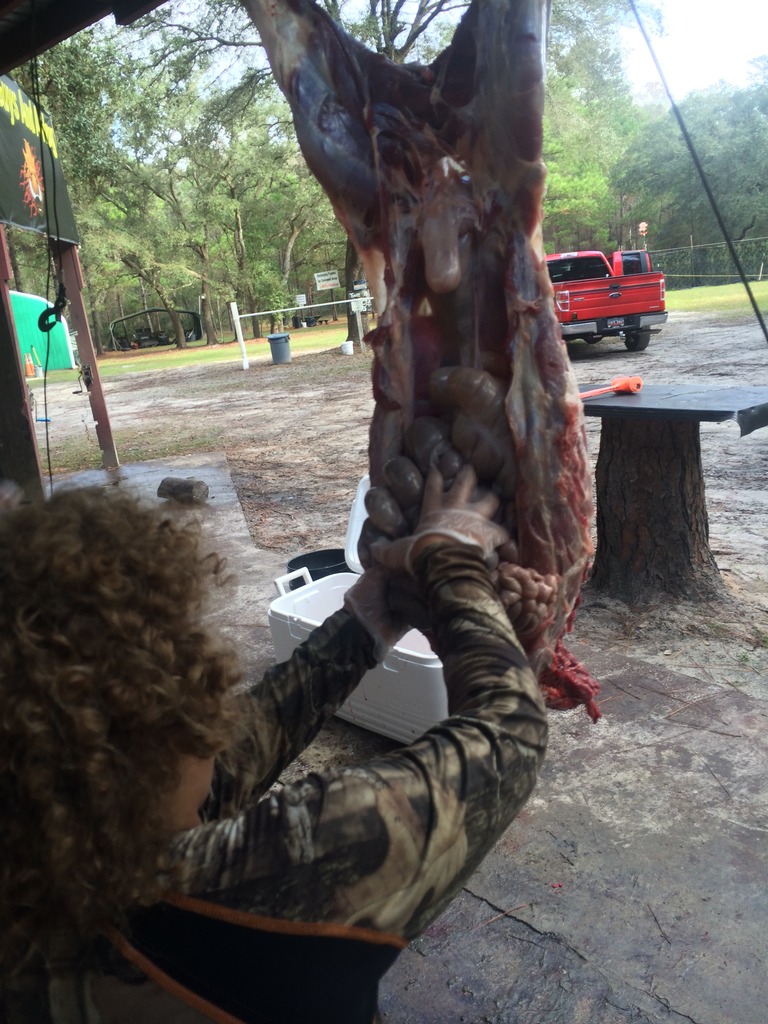 All in all, couldnt have asked for a better christmas. This was a great first experience for him and he couldnt wait to call his mother and tell her how he made a perfect shot and then helped cut the pig up. He spent the whole ride home talking about our hunt for next year and about getting a lighter gun so he dosnt drop it so much. I look forward to having a hunting buddy for coming years and planning to bring him to my deer lease to set him up on a nice doe and see if he can handle a 3 hour sit.

Well congrats and glad you got one!!! even if you hadn't harvested one, it was great for all of you to get out together.
It'not the years, it's the mileage......(Indiana Jones)

Thanks for putting the effort in with this young man.
Congratulate him from me.

Thanks for sharing the tale.
D

It is hard for kids to stay quiet. Heck I am 64 and it is hard for me. I prefer to be out moving(spot and stalk) but know sometimes that is not they way it is.
Good for him on the 1st kill. Looks like you have someone to hunt with and teach.

I've been waiting for this report. I would say you have a new hunting partner for life!
"I don't need to shoot farther...I need to hunt closer." - G. Sitton

I was talking to the skinner about an alligator hunt I was looking at. First thing he says to my mom when get home is "Dale and I are going alligator hunting next year". He is definately hooked.

Hunting with kids !
Dont you love it .
Took a youg fulla on his first deer hunt here in New Zealand last Xmas .
Same as your nephew , made heaps of noise and wouldnt stop talking , Ha !
Got him a youg stag somehow .
All in all , hooked for life .
And ive become his favourite old bugger so his dad said .
Ha HA .
My wife said if I carried on hunting she would leave me................... I really miss her !

Thats awesome!!! Glad he got his pig!!! Congrats to everyone on the hunt!

KIDS ARE OUR FUTURE ! .....Congrats to you both !
Glen
GOOD LUCK AND PLAY SAFE !

Great story. I was able to take my nephew on his first hunt this year also - pheasants in Kansas. What a great experience!

Great work! It is vital that we pass on the traditions of guns and hunting to the next generation!

You deserve great respect for having the patience and commitment for you taking your nephew to "pop his hunting cherry"! Trust you've started a life long journey to be enjoyed together. All the best with the gator hunt.

Redruff said:
You deserve great respect for having the patience and commitment for you taking your nephew to "pop his hunting cherry"!
Click to expand...

GREAT ending to this story that you started a while ago... fortunately it will NOT be the END, but rather a long journey of wildlife & hunting for the young man...and, by the way... he will do great, I see that he shoots "leftie"
I expect to pass this way but once.... any good thing that I can do for my fellow man, let me not deter, but do it now... for I do not expect to pass this way again.
Anonymous

Well done sir. He will remember that trip for the rest of his life. He'll also tell all of his friends about it. Time well spent. Great way to start him off hunting. Bruce

Made my night reading your report! Great job uncle.
K

Congratulations to you and your nephew .
Glad you got another hunter on his way. Forrest

Are you going again this year?
You must log in or register to reply here.