This is a write up for a hunt I did in January 2017 with Cat Track Outfitters. This hunt started off with a bunch of delayed flights in the Midwest. I ended up arriving in Grand Junction, Colorado late around 2300 which was 7 hours off. Anyways, the outfitter was in touch with me a few times during the day and I ended up getting picked up by his wife that night. I only had one bag as I elected to use the outfitters gun. We immediately went to Walmart and bought a Cat tag (make sure you have a hunters safety card and it helps to get in the CO system with a number prior to arrival) and then Wendy’s as I was hungry. About 2 hours later on some seriously icy roads, we get to the parents of the outfitters house where I would stay. Most of the hunters sleep in the rooms of the “parents” house and eat there to. The Outfitter was Fred Wallace, who lives in Collbran, Colorado and hunts private land as well as BLM. I knew about Fred as I had hunted with his Dad about 21 years prior for elk. His family is very much hunting driven. Bill, the outfitters Dad, has since retired but has hunted tons of cats, elk, deer, and bear in the Colorado Mountains. Fred’s grandfather was also an outfitter. Anyways, I was up the night before so basically did not sleep for about 24 hours when I got the good news that I would be up in 2 hours for breakfast and to leave. Fred was already up “cutting track” at midnight driving all kinds of places. So after an hour and a half of lying awake in bed, I got dressed and was met by the crew of 3 guys. It was about -15 F so the weather was not too different from home. I drove with Fred’s son Cody in a souped up Toyota Tacoma made for getting back in the snow. Deep Snow. After a few hours of driving, we ended up getting a call from Fred that he was sitting on a track and to meet him back some long meandering trail that you better not get stuck on without provisions or your toast for sure. We jumped on the tracked ATV’s and took off to the top of a gorge. Fred let the dogs loose and watched on the GPS to see what happened. The dogs zig zagged and stopped on the screen. I finally got my eyelashes unthawed from the ATV ride and could see. It was a balmy 10 degrees F. The screen stayed the same for about an hour with a little deviance and one dog sighted. Fred was sure the dogs were “shelved” and stuck. Anyways, He said to drive the ATV’s back to the truck and he would head down the gorge to get the dogs. We picked him up at the base of the mountain and our day was done due to light. I came back to a good meal and I crashed.

The next day, I woke up sick, as usual, with a sinus infection. Yeah!!! We got a good breakfast, and went out to a private ranch. Fred’s guys were out and found a track before light. We waited till legal hours, as Fred is a to the T, by the book guy. He is also brutally honest and does not mince words. He let the dogs go and in about 5 minutes the dogs were up two hills over chasing a cat and the next thing I knew on the top of this mountain. We also ran into wintering elk and mule deer. Fred was sure he was treed so we flew up the hills to the base of the mountain. It was about 20 degrees F as my nose hairs weren’t frozen nor freeze until at least 5 degrees. With my eyes in good shape (if you go, bring ski goggles), we took off some layers and headed up the mountain. Rock, ice, snow, and here we go. That was my thoughts for the next 3-4 hours. Did I mention that the altitude was higher than I’m used to? About 6000 feet higher. A nice walk and beautiful scenery and the smell was different. Juniper like, I guess or piney? Anyways, about 10 minutes from the top they spotted the cat and I was about spent. Soaked with sweat, splitting headache, sinuses going full throttle, and lungs starting to snot up, we arrived on the top. Cody said that we would sneak up to the cat and he would leash the dogs. When he said shoot, I would shoot but no sooner or the dogs would go over the cliff with the cat. The cat was on a small tree with a limb hanging over the cliff with all the dogs under the tree. The tree was literally 12 foot tall from bottom to top. The cat could lean down and pet the dogs if it wanted. Anyways, we loaded the 30-30 Marlin and snuck to within 20 feet of the cat. I had the hammer back with the open sights on his chest. It felt like an eternity waiting for Cody to leash the dogs. I prayed that flippin cat wouldn’t jump down and run cause I don’t know if I could do this again tomorrow. Cody no faster got the M in “Shoot Him” out of his mouth and I had 1 in the cat’s boiler. I heard a yell from somewhere say “Again”, and I put 2 more in about 2 seconds on the mark. The last thing I saw was a straightened out cat fall limp out a tree. I had no idea how far he fell. Cody said “You did just as you were told” and smiled. I felt that was congrats enough for me. I thanked God of course and then we went to get the cat. Fred was actually at the bottom of where the cat was and the cat went over him. 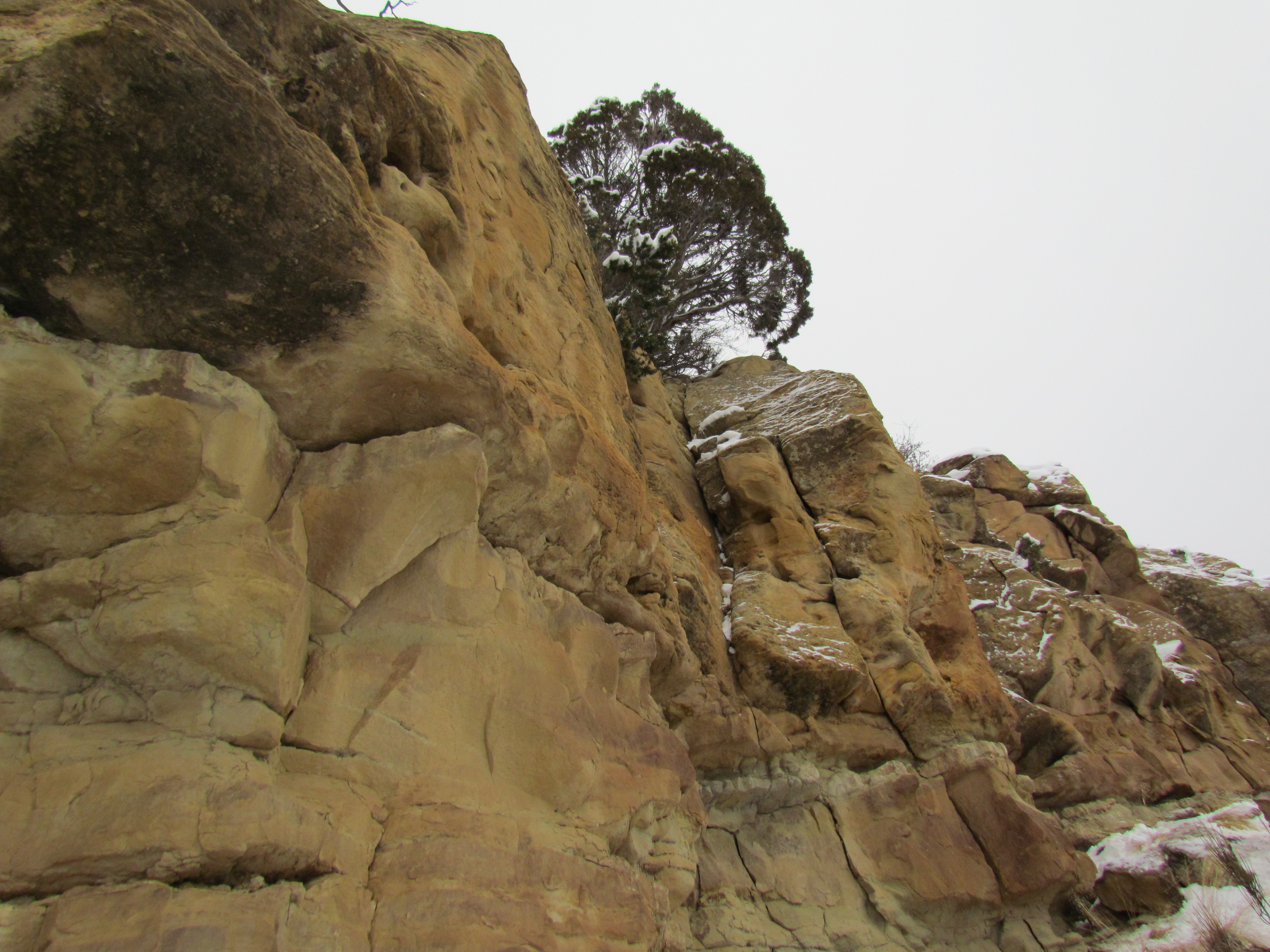 The hike back was cool as I was soaked and we did see a lot of elk on the bottom feeding. The next 3 days I tried to get a flight back but the charges were too high and I decided I’d rather hang out and stay sick in bed and eat. Besides, we had another snow storm and they delayed most of the plains in that area. The game warden came to the camp and checked the cat and was by far the nicest guy I had met. He was very informative and interesting to talk to. 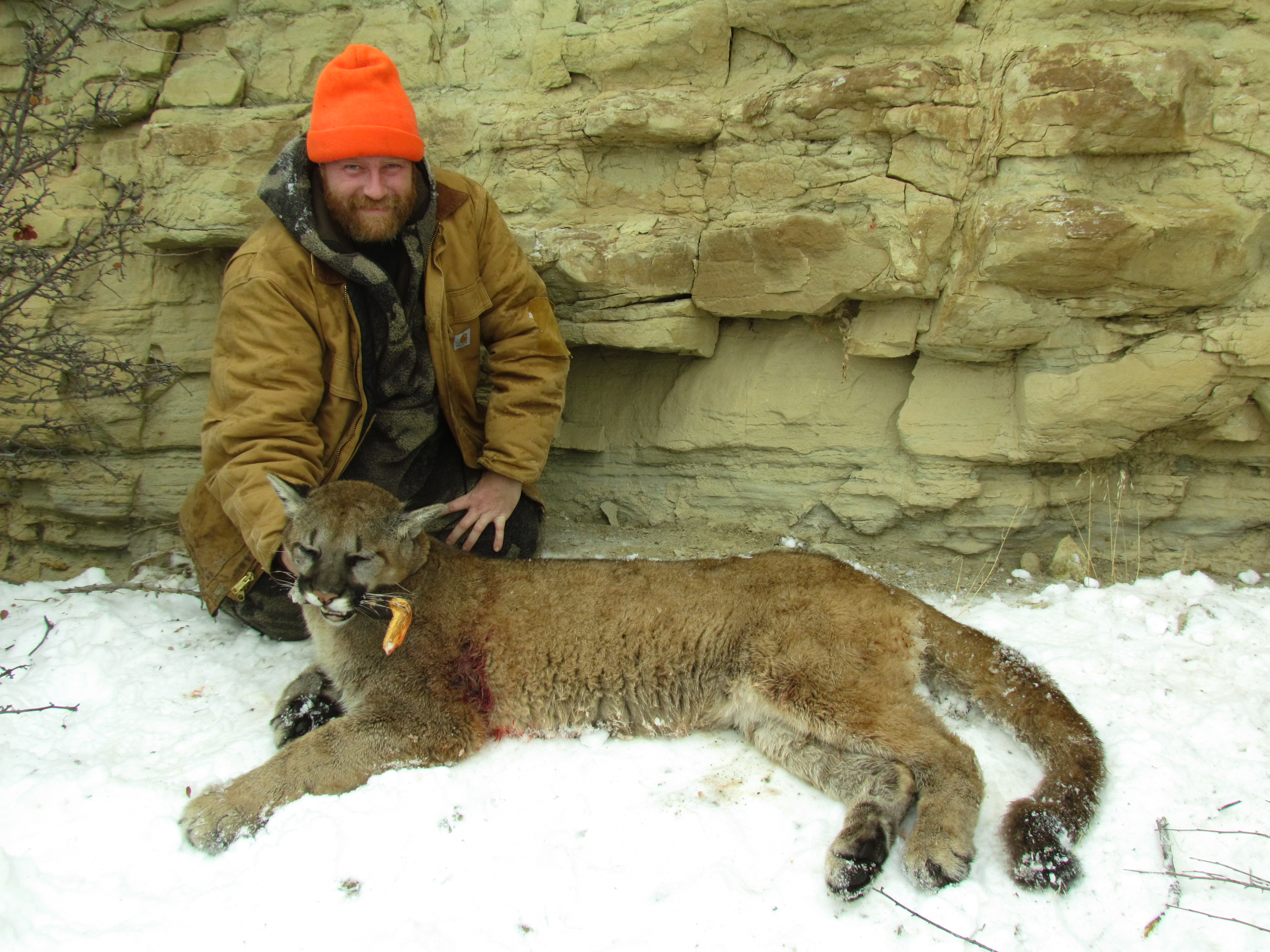 So all in all, I would go back and probably will hopefully. It is definitely a rewarding hunt. But you need a competent outfitter like Fred to do it. A weekend drunk with one dog will get you into trouble in that country. 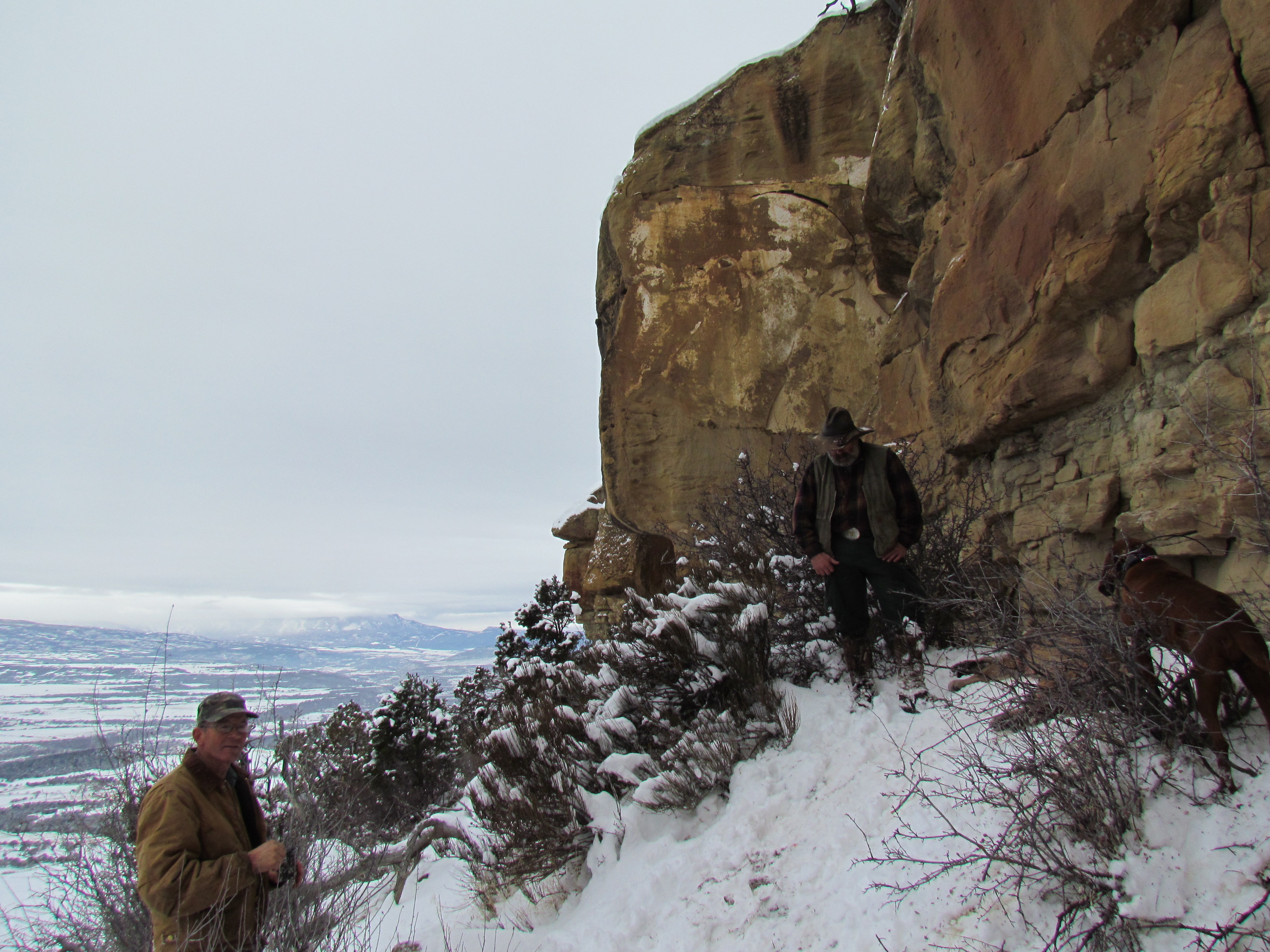 Positives: The outfitter had many fresh dogs to keep the hunt sustained for the hunters. The food was good and plenty. The accommodations are warm and comfortable. The game quality was good. The equipment was very good (both 6 wheelers on tracks and 4 wheelers on tracks) as well as multiple trucks to get you to where you need to be. Communication was great and never a time when you would be out of contact in the areas we were in. Outfitter supplied a good lever action gun.

Negatives: I got sick. I was not used to the altitude. I forgot there was “mountain” in mountain lion hunting. Should have brought ski goggles for the atv ride and lighter clothes for the climb. Very icy on the mountains so best to have well soled boots and gaiters are a must in 3 foot+ of snow. 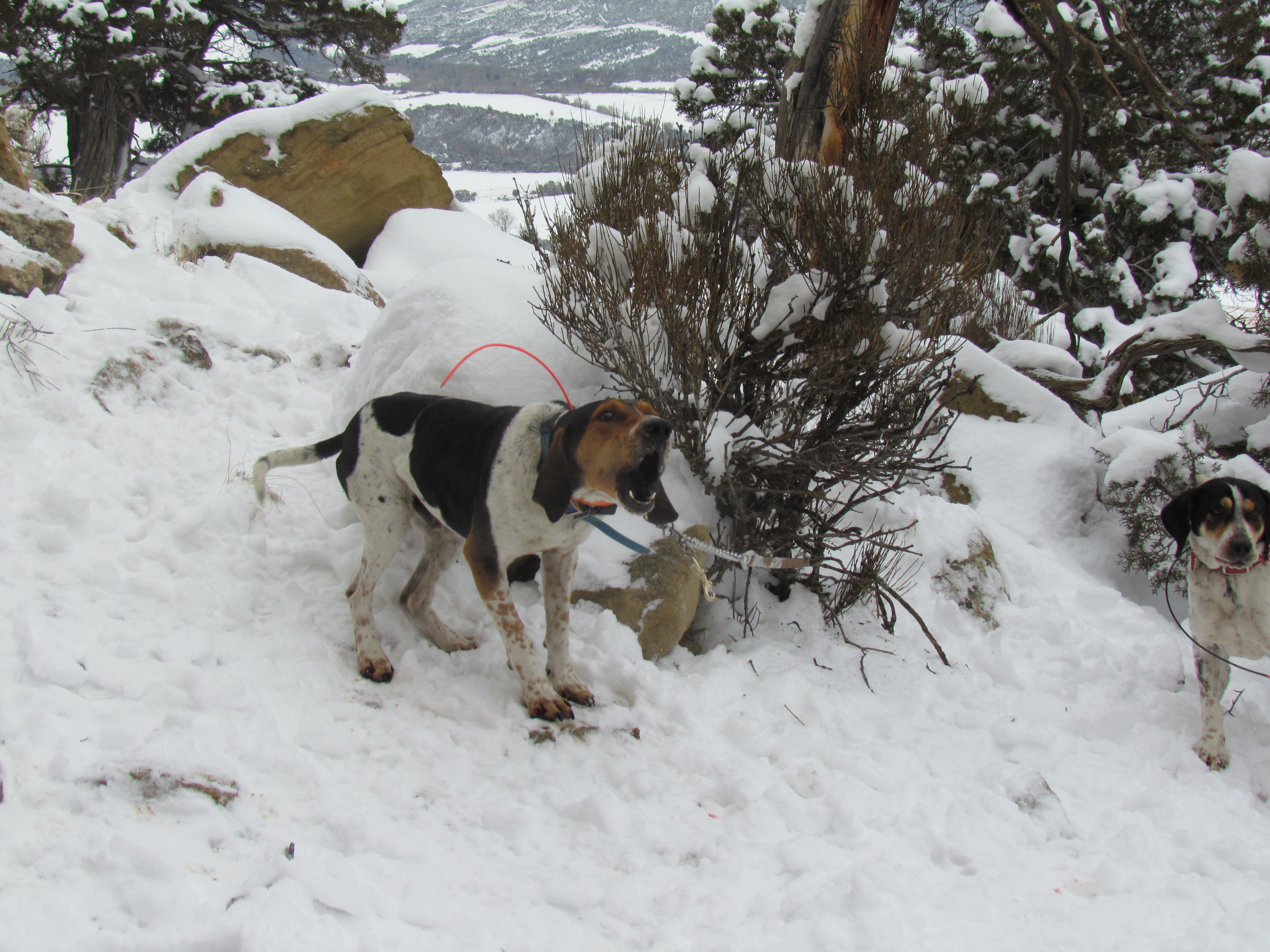 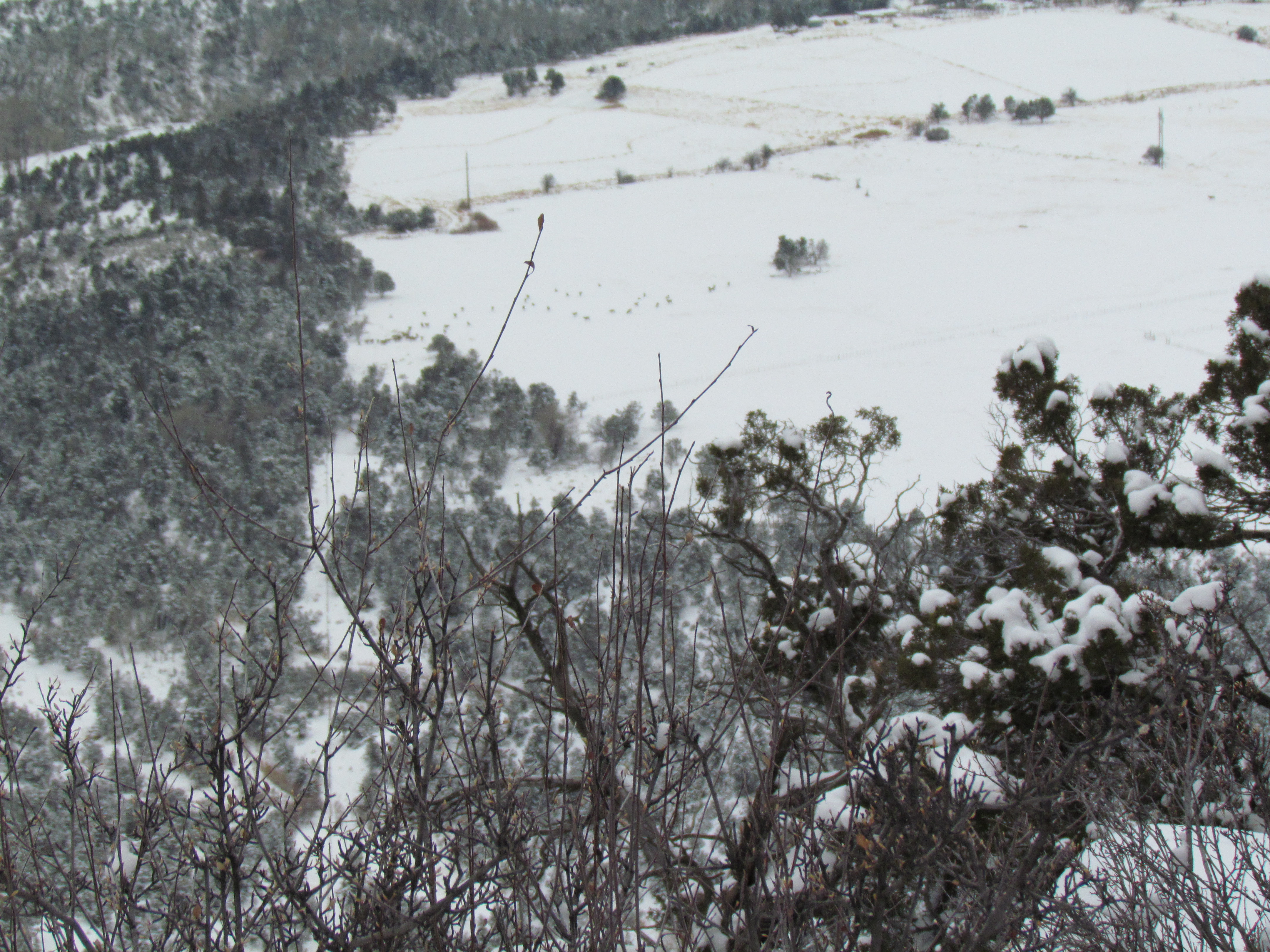 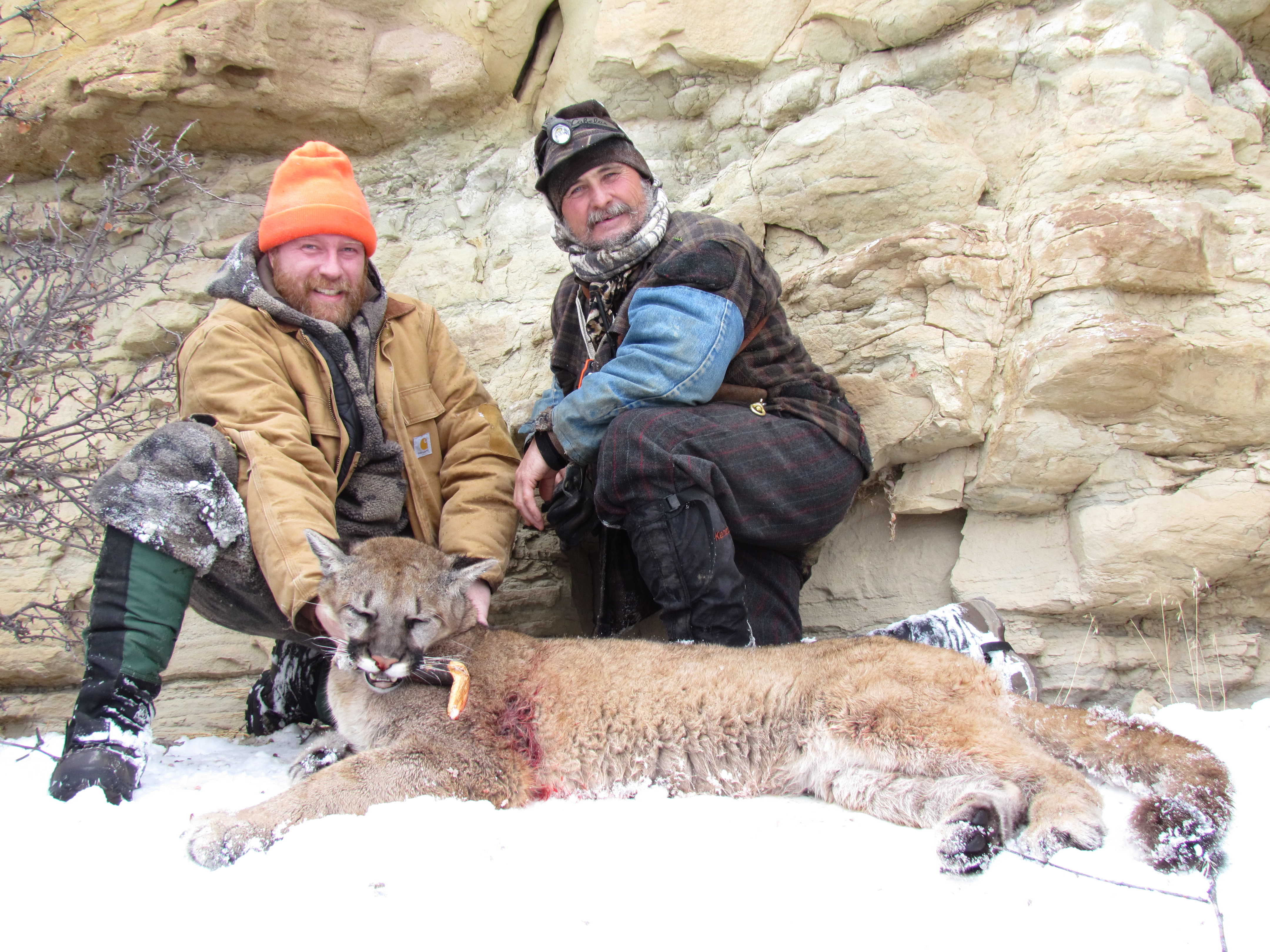 Good looking cat. Congrats. Too bad about getting sick. Nice that you got him without further delay. A 30-30... Interesting choice for a Mtn Lion. I suppose you virtually are never going to be over 50 yds....
Bruce

Conrats on a beautiful cat. MTN Lion hunting is no joke, serious business. Glad ou toughed it out, sinus infection and all

Glad you got your cat. That Mesa by Junction has some serious altitude. A .30/.30 is a perfect gun for cats, fits in a scabbard and just screams West. Thats' the same gun i used on mine.
It'not the years, it's the mileage......(Indiana Jones)

gillettehunter said:
Good looking cat. Congrats. Too bad about getting sick. Nice that you got him without further delay. A 30-30... Interesting choice for a Mtn Lion. I suppose you virtually are never going to be over 50 yds....
Bruce
Click to expand...

I bet that gun has a lot of cats under it's belt. It was the short barreled Marlin also. I never did work a lever action as fast as on that hunt!
You must log in or register to reply here.