This past weekend I traveled from Cincinnati, Ohio to Turkey, Texas for the last of Erik Grimwald's meat bison hunts for the year. It seemed as though it took forever for February to get here! I was warmly greeted by Erik, his hunting assistant Shane, and the wonderful chef Kelly at their lodge. Pretty much right away it was off to the shooting range to check out my Marlin 1895 in .45-70 on the standing metal deer target (would love to have one of these)! Zero was affirmed with a couple shots and off we went to view the high fence property, where fun awaits. We were able to view the bison herd and the particular animal that we would be looking for on Saturday. I got to tour and see many of the exotics that the Rockin G Ranch offers, some species I'd never seen before outside of photos. As it was getting dark, we returned to the lodge for a great dinner of shrimp and pasta with salad, and plenty of choices for drinks. We spent the evening talking over the bison hunt and just getting to know each other.
Next morning, another great meal for breakfast and off to the game reserve. We located the bison herd quickly but they decided to move off and an attempt to intercept them ended with the two big bulls (Apache and Geronimo) crossing in front of us while the others headed off in a different direction. Fortunately those two moved off and rejoined the herd at the east side of the property. We moved around a big canyon and stalked the group from the south. Erik had us paused in a cut where he hoped they would pass by, Shane threw up the sticks and I got ready to shoot. A minute passes by and lo and behold, first bison to appear was mine! At this point I was pretty geeked up but settled down quick for a shoulder shot. Erik shouted "Good hit!" or something to that effect, and off we were running to intercept them again as the whole group ran past. Another shot through the shoulder and down the bison went. A third shot was the finisher and it was time to check out my bison. What an incredibly thick coat! Erik returned to the lodge to get his tractor for moving the bison to a more picturesque spot for photos, then back for butchering. He skinned it and cut it up to fit into the five huge coolers I brought to bring it home.
Returned to the lodge for a good lunch, where it was noticed a sounder of hogs was located in the field in the creek valley. Shane and I snuck down there without spooking off some mule deer, he put up the sticks and "BAM", a hog down. The .45-70 is a decisive killer. 430 grains of cast lead at 1780 fps is brutal!
We baited another spot for hogs, when we returned there were already a few around later in the afternoon. Tried a longer shot, I think I was under but didn't get an animal. All on me, I think I was getting flinchy by this time. Drove around on the Can Am a bit more but nothing else to be found. Another wonderful meal of bison heart and beef steaks on the grill plus plenty of sides. Had some good bourbons and Shiner Bock, my favorite Texas beer.
Sunday unfortunately was a big change in the weather, howling winds with some rain. Erik was persistent with trying a few locations for calling coyotes, mostly draws where the wind wasn't as bad, but nothing. Everything seemed to be holed up. Did a little fishing in his lake, Erik won with 4 bass to my single, went and had another great meal (stuffed chicken breast), then went out again when darkness fell to call coyotes again. But the strong winds persisted, we had two coming across a big field to the caller and they disappeared into a draw and were not seen again. Did some searching for raccoons and jack rabbits but by this time the winds were ridiculous again, so we called it a night.
Monday morning was not looked forward to, we packed up the coolers and said our good-byes, and I headed home. Back to reality...work.
In closing, I was really glad I booked this hunt with Erik and his team at the Rockin G. Erik certainly catered to me and always tried to keep me busy. Accommodations are excellent (I had the entire lower level during my stay), the food quality and quantity are outstanding (no way you can go hungry here), everyone was very personable. I felt like I just made 3 new friends. The new lodge being finished will look great. I'm pretty confident I'll be back. 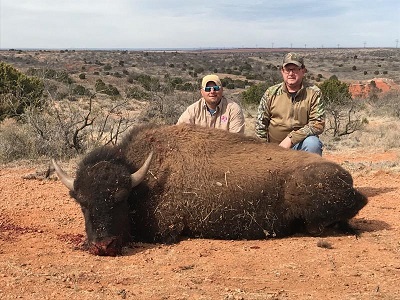 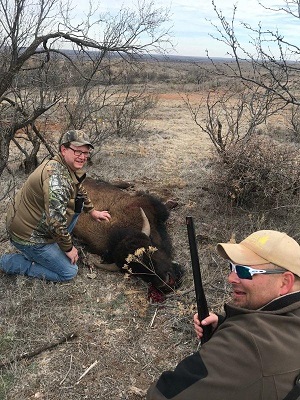 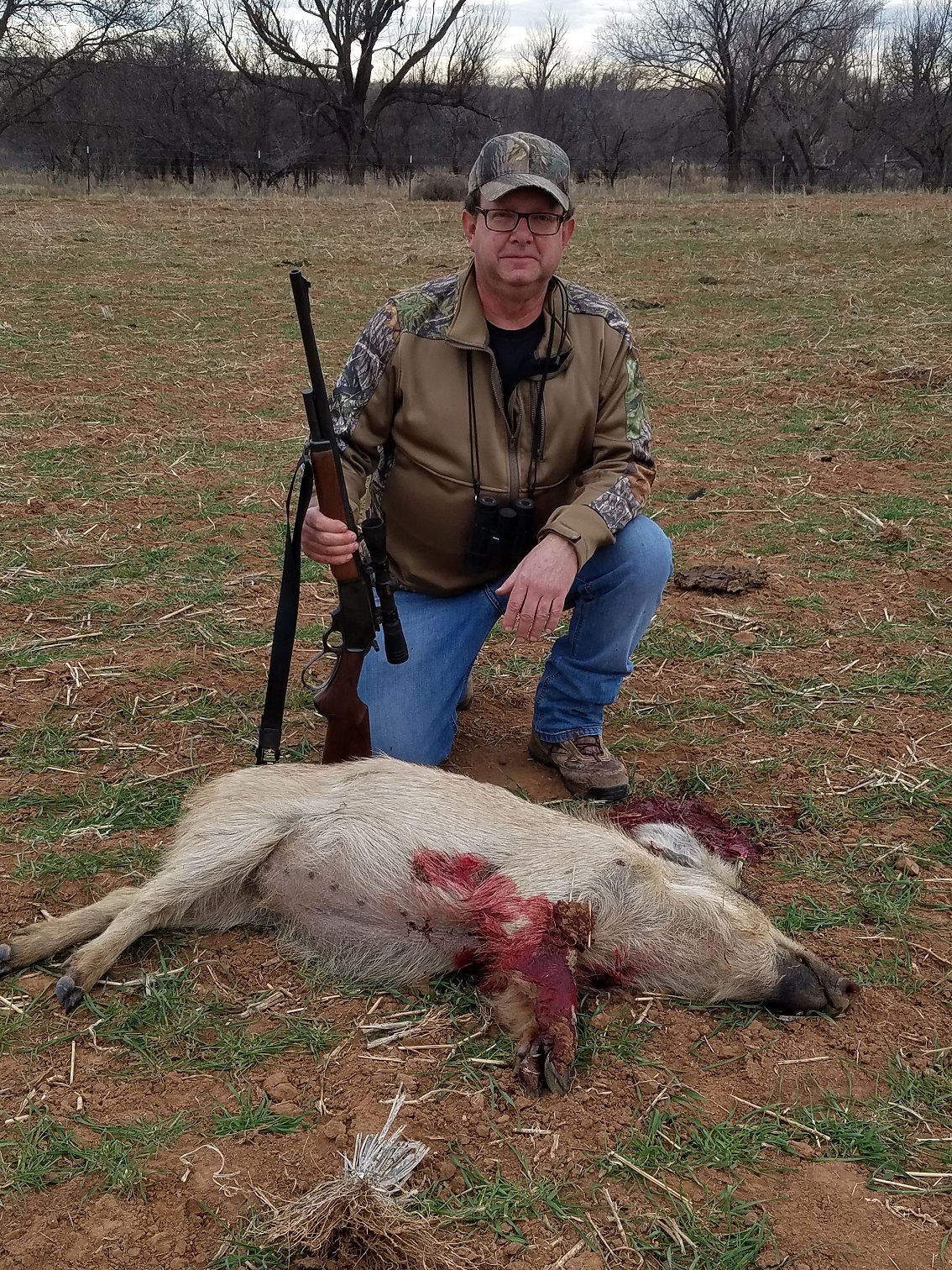 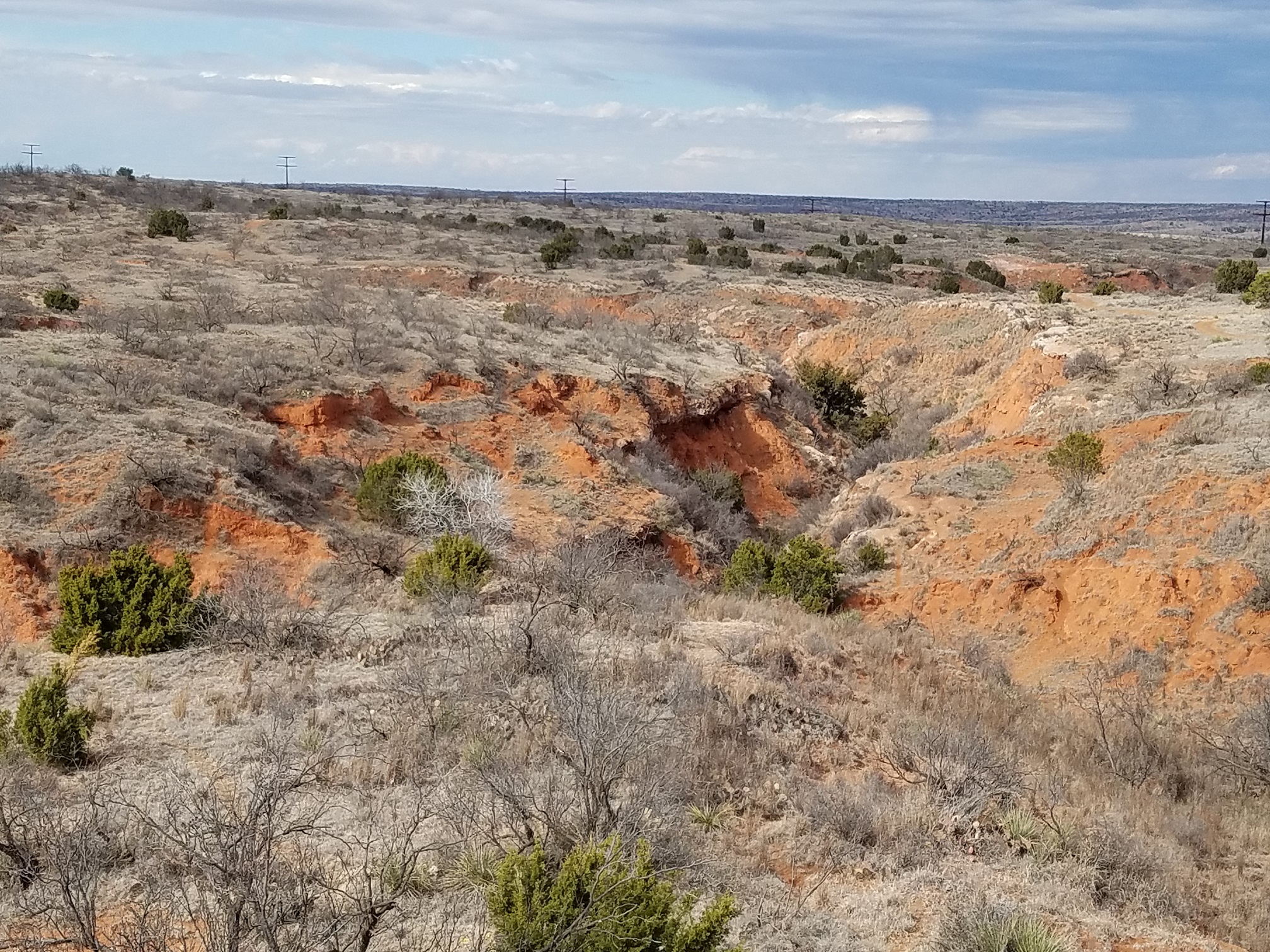 Congrats on getting your bison and a hog.

Glad you had a good trip and congratulations!
Old Griswald(Grimland)lol. Has a great place!
Are you doing a robe and euro?
"Montana seems to be what a small boy would think Texas is like from hearing Texans" John Steinbeck

Bullthrower338 said:
Glad you had a good trip and congratulations!
Old Griswald(Grimland)lol. Has a great place!
Are you doing a robe and euro?
Click to expand...

I was thinking about going that route but decided to have Erik do a shoulder mount on a barnwood pedestal, it'll look great in a corner in my living room or trophy room. Erik does have a great place. Hated leaving it. The 17 hour drive back home didn't help.

gizmo said:
Thank you buddy, we had an absolute blast hunting with you and are really looking forward to getting to do so again! Folks Ron is a freakin sniper with that 45/70.
Click to expand...

Lol Erik you tell some good stories. Sign me up for another next year, when you have this year's mount ready for pickup.

Awesome! Congrats and thanks for sharing!
John 3:16

Trogon said:
Lol Erik you tell some good stories. Sign me up for another next year, when you have this year's mount ready for pickup.
Click to expand...

gizmo said:
you betcha! I’ll have more when I get back from RSA in September.
Click to expand...

Sounds good, best of luck on your trip!

Trogon, sounds like a grand time! Congratulations! Oh that is going to be some outstanding meat!
Africa on my mind.

Ridgewalker said:
Trogon, sounds like a grand time! Congratulations! Oh that is going to be some outstanding meat!
Click to expand...

You will enjoy all that meat, we have been eating bison non stop for the last month! Giant bison ribs going on the smoker this weekend!

Seavas said:
You will enjoy all that meat, we have been eating bison non stop for the last month! Giant bison ribs going on the smoker this weekend!
Click to expand...

Hey Seavas, congrats on your hunt, looks like you did well for yourself!

Trogon said:
Hey Seavas, congrats on your hunt, looks like you did well for yourself!
Click to expand...

Yessir thank you! The Rockin G is a great place! Im not so sure about that Erik guy though, ha!

Awesome place isn’t it? Glad you got to experience it.