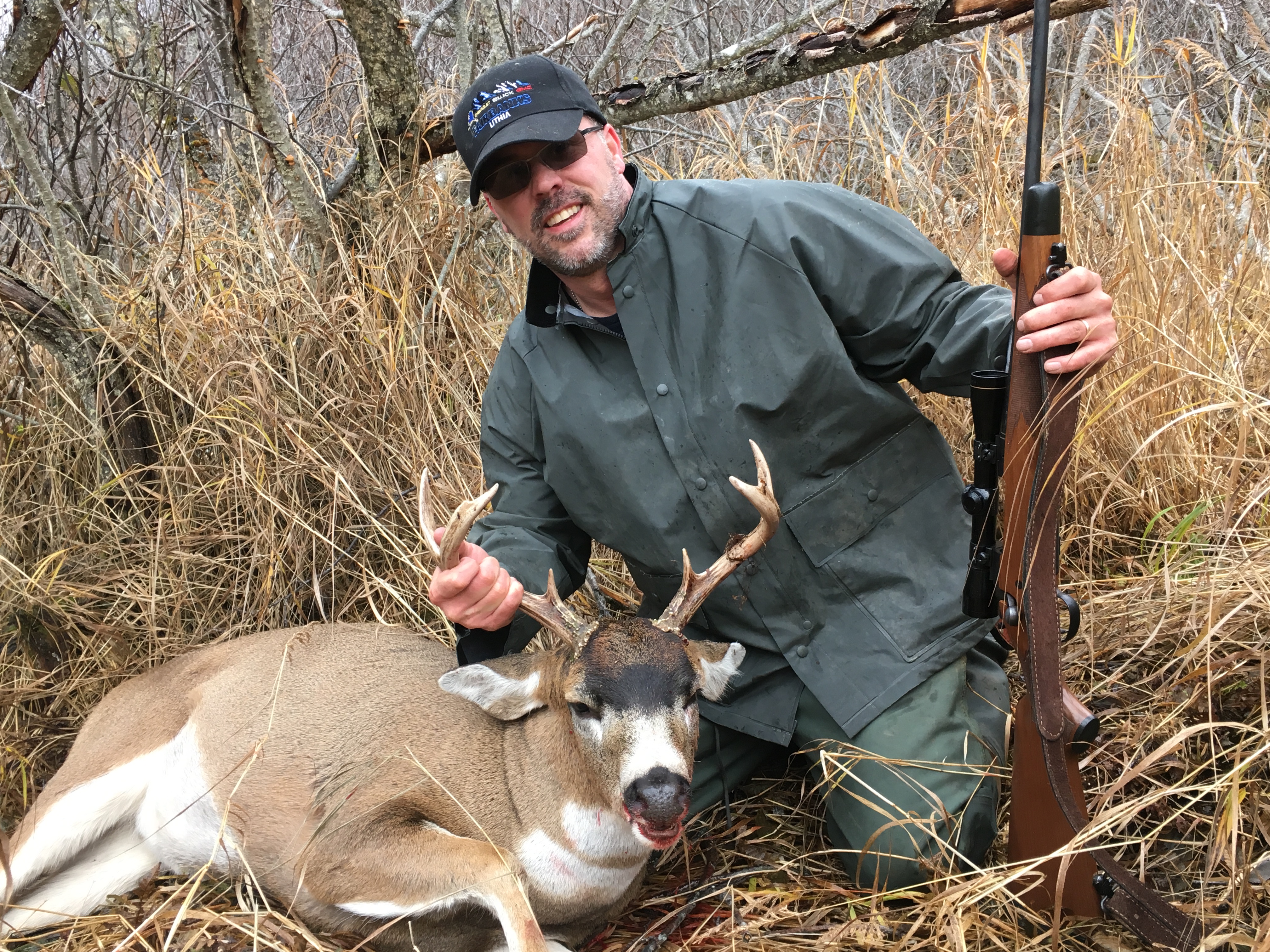 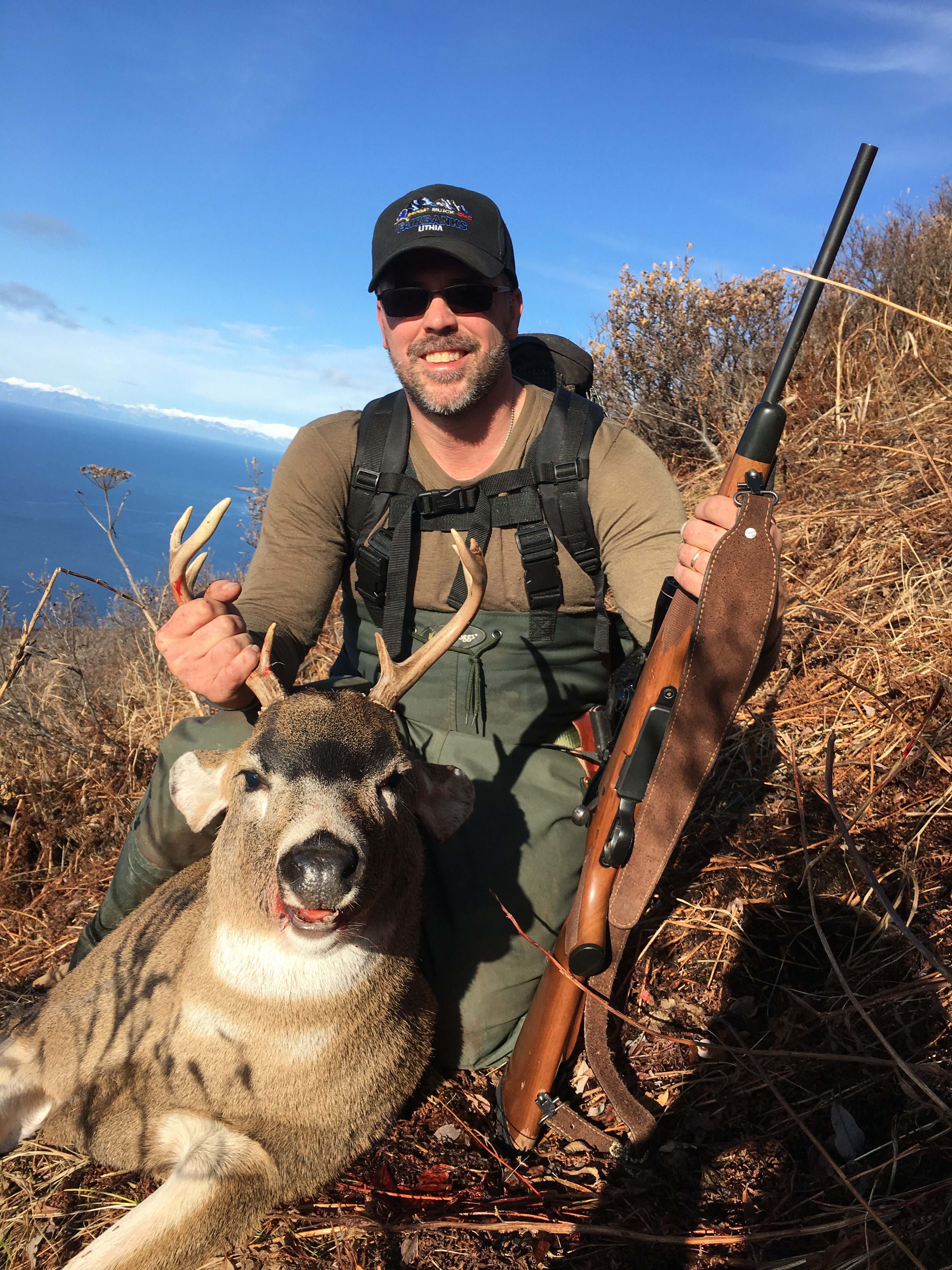 Both were taken at altitude; top one at about 1200'.Until he leapt off the back of the mountain after being lung shot, recovered at about 800' then packed 5 miles back to the beach.(that's 5 miles worth of steps straight up and straight down, not as the crow fly's) Shot was about 200yds. Slug was perfectly mushroomed found just under the hide on the opposite side.
Second one was taken at about 2200' after climbing to 2600'. Caught him trying to sneak out behind us. Shot was 250yds. severely uphill. Shot entered the lower left front shoulder and exited behind the neck taking part of the spine. Lots of bullet fragments on that one, exit wound looked like a shotgun, spine was peppered with fragments. I was a little surprised the Core Lokt broke up so bad on a little deer shoulder.
No real bear trouble, but we(my 14yr old son and I) were within 10-15yds of the biggest bear I have ever seen, and I have hunted Kodiak 4 times previously. He didn't come after us but did move in on the gut pile and carcass after we boned it out. Sorry no pics of the bear, we were in haste.
Shout out to Andy, Marty, and Linda Eaton at Zachar Bay Lodge. They are the nicest people in the world and run a first class but affordable operation. I would definitely hunt there again. Also thanks to Glen and Kyle Eaton, Andy's brothers, at Kingfisher Air for getting us to and from safely. First time flying in a Bush Hawk, great plane that will haul a little more than a 206. 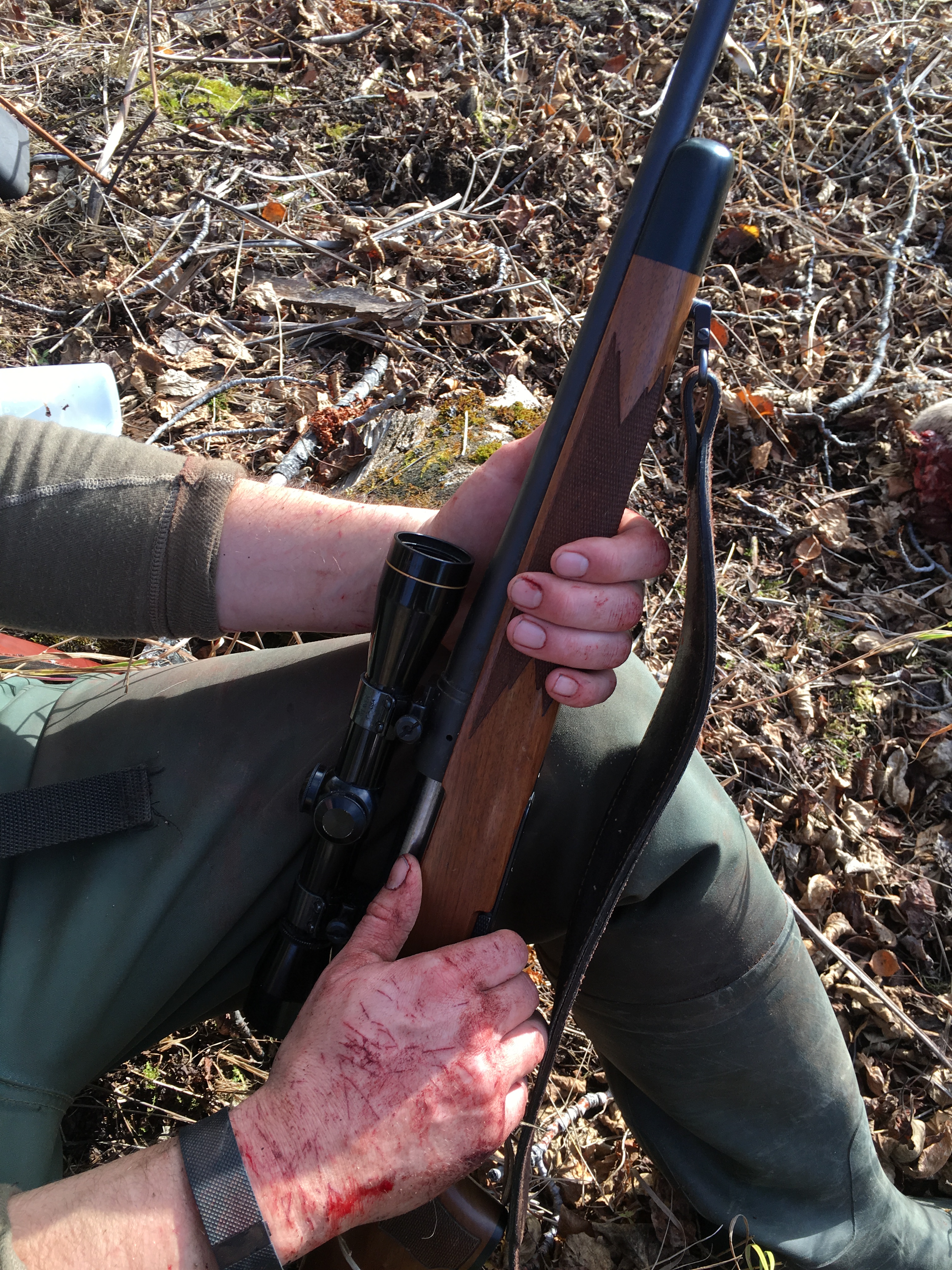 My right hand after 3 days of battling devils club and alders. I don't like to wear gloves especially in country where quick shots may be necessary. I have since reconsidered that position and may invest in a pair of leather finger-less gloves.
All in all, fantastic trip mostly good weather with no cell phones and no email; and my son got to shoot his first deer, 75 yds with a Marlin XL7 30-06. Spine shot dropped where it stood.
Couple of takeaways on our gear and rifles. Frog Toggs chest waders are double tough and are just the ticket for hunting Kodiak. They are a little restrictive when climbing mountains, but make up for it in the swamps and alders. That was the good, the bad was...our rifles.
We had multiple occasions on both our rifles when an alder branch, or rubbing against our bodies when shouldered on our left sides, flipped the bolts opened and emptied the chamber. Jake's Marlin even had a round slide sideways out of the magazine and hang up; so that even if he had tried to cycle the bolt to feed a new round it would have jammed. We will be switching to controlled round feed rifles with three position safeties with the floor plates welded shut at our earliest opportunity. On the plus side we loved the shortened barrels. Carbine length for Kodiak is the only way to go IMO. For those of you who have hunted Kodiak please feel free to share your gear/gun tips, I'm always looking to improve my setup.
Cheers
Last edited by a moderator: Dec 8, 2016

Agreed, we hunted for 7 days, by the last day my old hockey playing knees had about enough of mountains, swamps and alders.

Welcome to AH.
Very good article and nice trophy.
Good luck and all the best.
Witold

Great story.
Thank you very much,I love it to read about Alaska.

Here a ideal Gun for you in the swamps.
Blaser R 8 ,short (1 m) by full barrel length,
One Round in the chamber and you are also safe.
A handpressure (only by the first shot) and accurate.
Greetings
Foxi

Congratulations on surviving the hunt with some nice deer and zero bear mishaps.
Looks like the weather was not outrageous.

Thanks for sharing your hunt report.

Congrats, I have always wanted to do this hunt.

Welcome to the site. I ve hunted Alaska 4 times, one of my favorite places to hunt. It can be a young man's hunt though as some of the terrain can be difficult. Your hands looked like mine did after 2 weeks in the Namibia bush! They will heal and the memories last forever.
Tommorow is promised to no one. Go live your dreams.

Those Sitka blacktails are the prettiest of the North American deer in my opinion. Nice pics!
"I don't need to shoot farther...I need to hunt closer." - G. Sitton

I love blacktails. Nice work.
Life is too short to hunt with an ugly gun
You must log in or register to reply here.