This is more a report on logistics and operations than the hunt, since we didn't actually even see any bears, let alone kill any.

I got a few nice pictures, but unfortunately, we didn't get any bears. They just disappeared from the area, apparently the day we arrived.

Flying American, I left IAH at 0700 on 1 Oct, and had booked a flight for my son to leave Dulles at 0700 EDT, we met up in DFW, and landed in Missoula on time at about 1230 PDT, and rented a car. Missoula airport is a piece of cake to navigate, and so is the one in Kalispell if you ever get up that way. Anyway, I digress. I rented a new Explorer (a free upgrade, just cuz the dude was nice) from Alamo.

For where we were going in Idaho, we should have flown to Lewiston, not Missoula. Missoula was a tiring (though quite beautiful to this lowlander) 5-6 hour drive to the Nez Perce/Clearwater National Forest in north central Idaho. Lewiston would have been a shade under 3 hours.

We pulled out of the parking lot at about 1330, arrived in camp at about 1900, just as the sun was setting. The last 20 miles or so was unimproved, average speed was probably about 20 mph. There weren't a lot of switch backs, but it was pretty curvy.

We were greeted by our guide, Mel (a woman, knows her business) and the camp cook, Sarah. Unpacked the Explorer to a straight wall tent, and were promptly served a supper of cowboy beans while sitting around a nice campfire. Dick Anderson, the owner, arrived at about 2000 after a supply run down to Kamiah.

Sunday morning, we made sure our rifles were still zeroed, which they were. Sunday afternoon, we were each driven to within about a half mile of our blinds/bait stations, the walking was fairly easy and mostly pretty level ground. Monday through Thursday hunts were a repeat, and we probably spent about 45 or 46 hours total hunting. The bears just weren't moving, and none had been seen on any of the game cams since the day we arrived, the 1st.

https://ridgerunneroutfittersllc.com does a lot of elk hunting, too. Base camp is the same, but it's a pack-out hunt on with an assortment of the 18-20 horses and mules kept in a corral at the camp. You can see a few of them behind my son here. 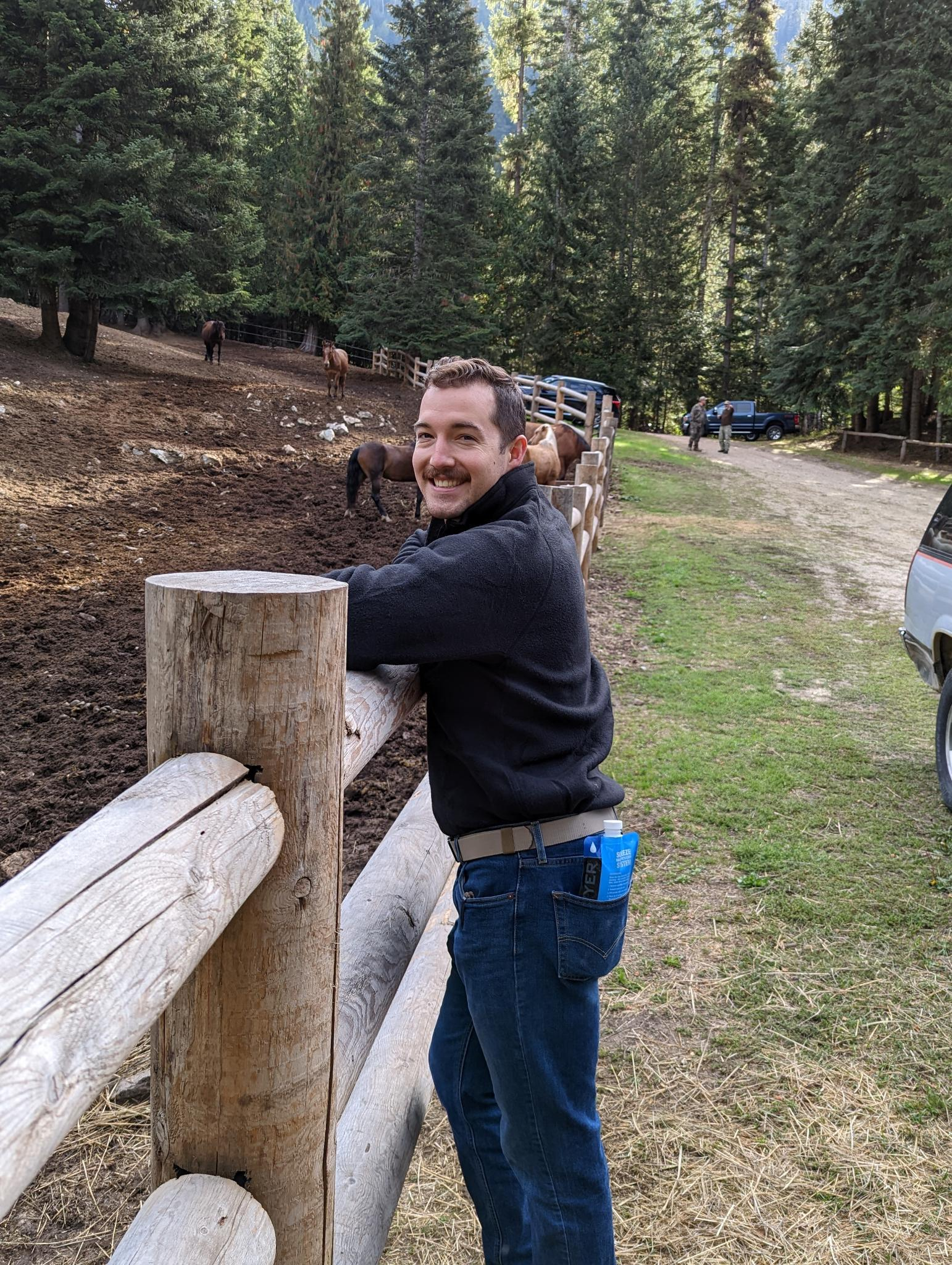 A view from my ground blind down to the bait station (the darker area just right of dead center of the picture, straight up from the muzzle of my rifle). They have a couple spots where the shots are north of 70 yards, but mostly it's around 15 - 60 yards. So leave your 270s and 7mm RMs at home. There is a slim chance to run into grizzlies, but they've only seen a couple there over the years, so not a big concern. 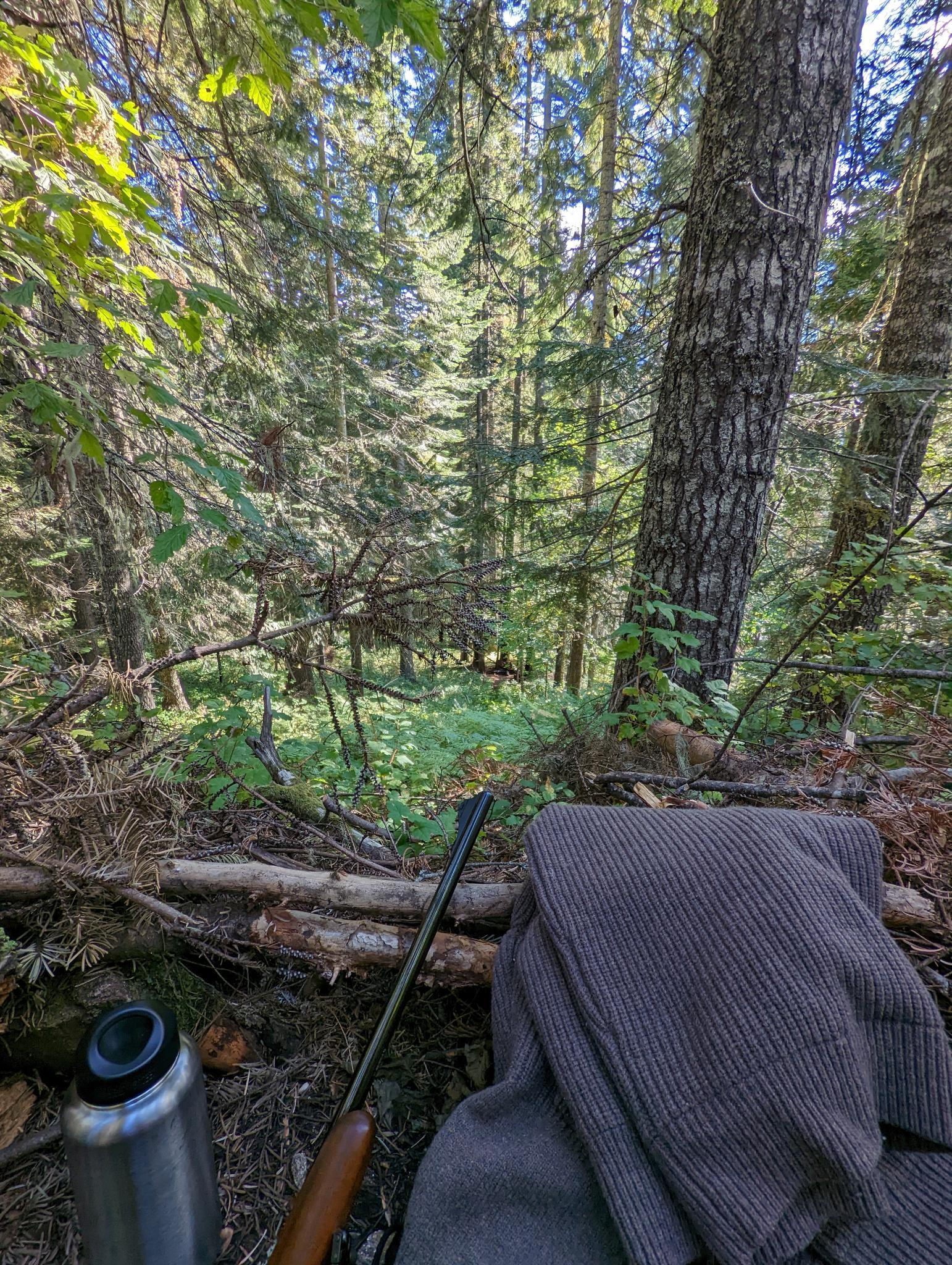 This one is just because I like the scenery. 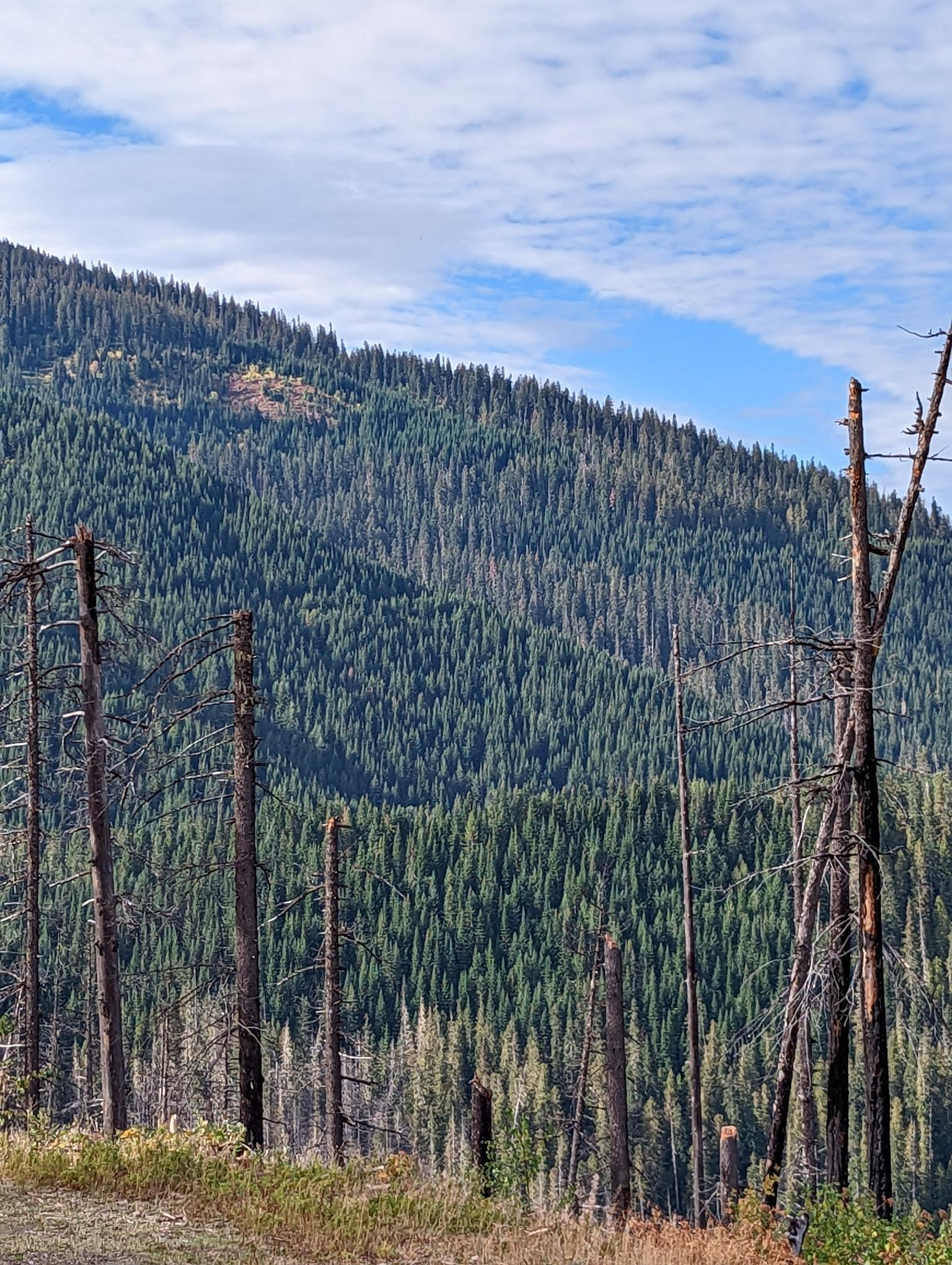 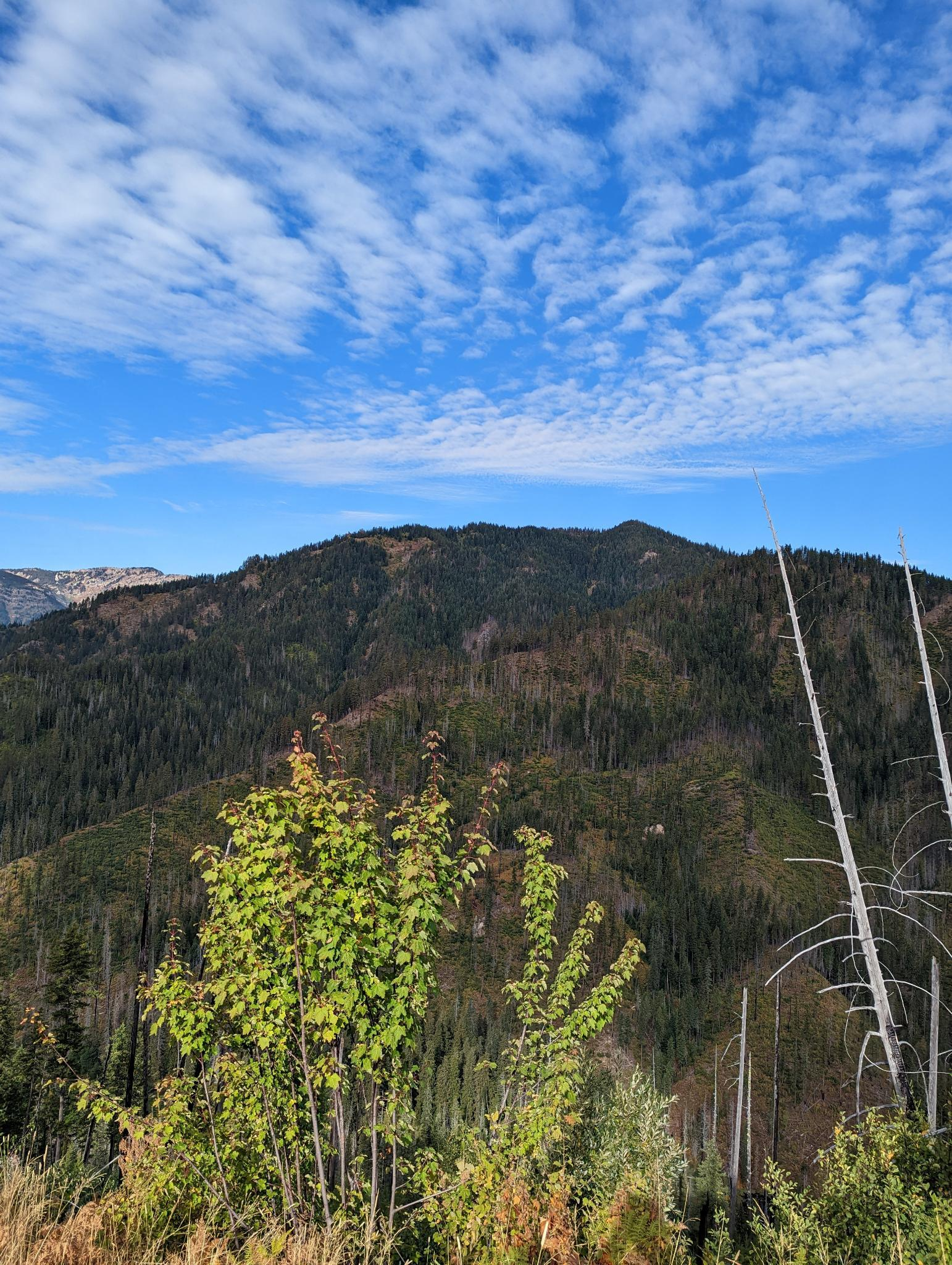 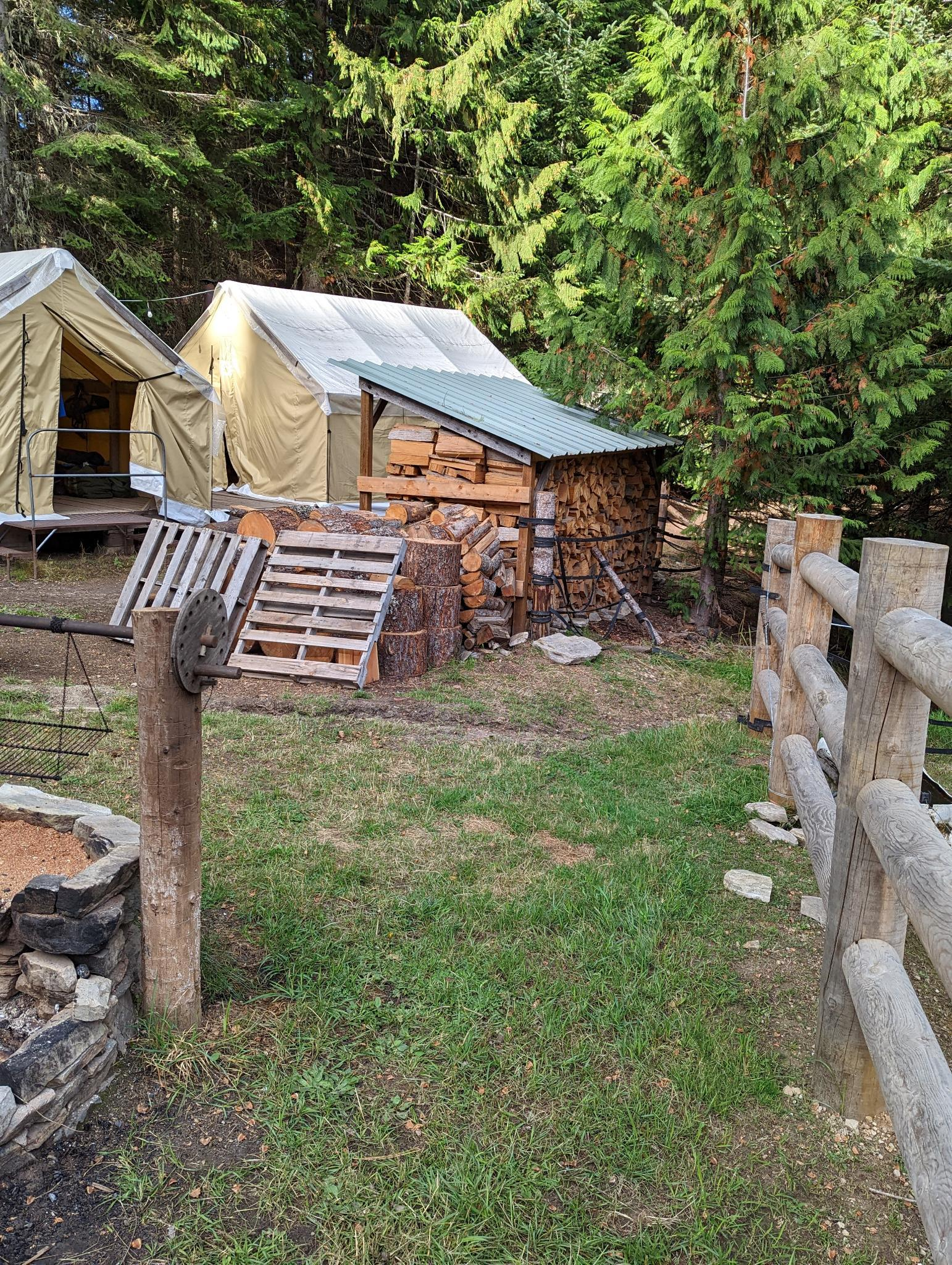 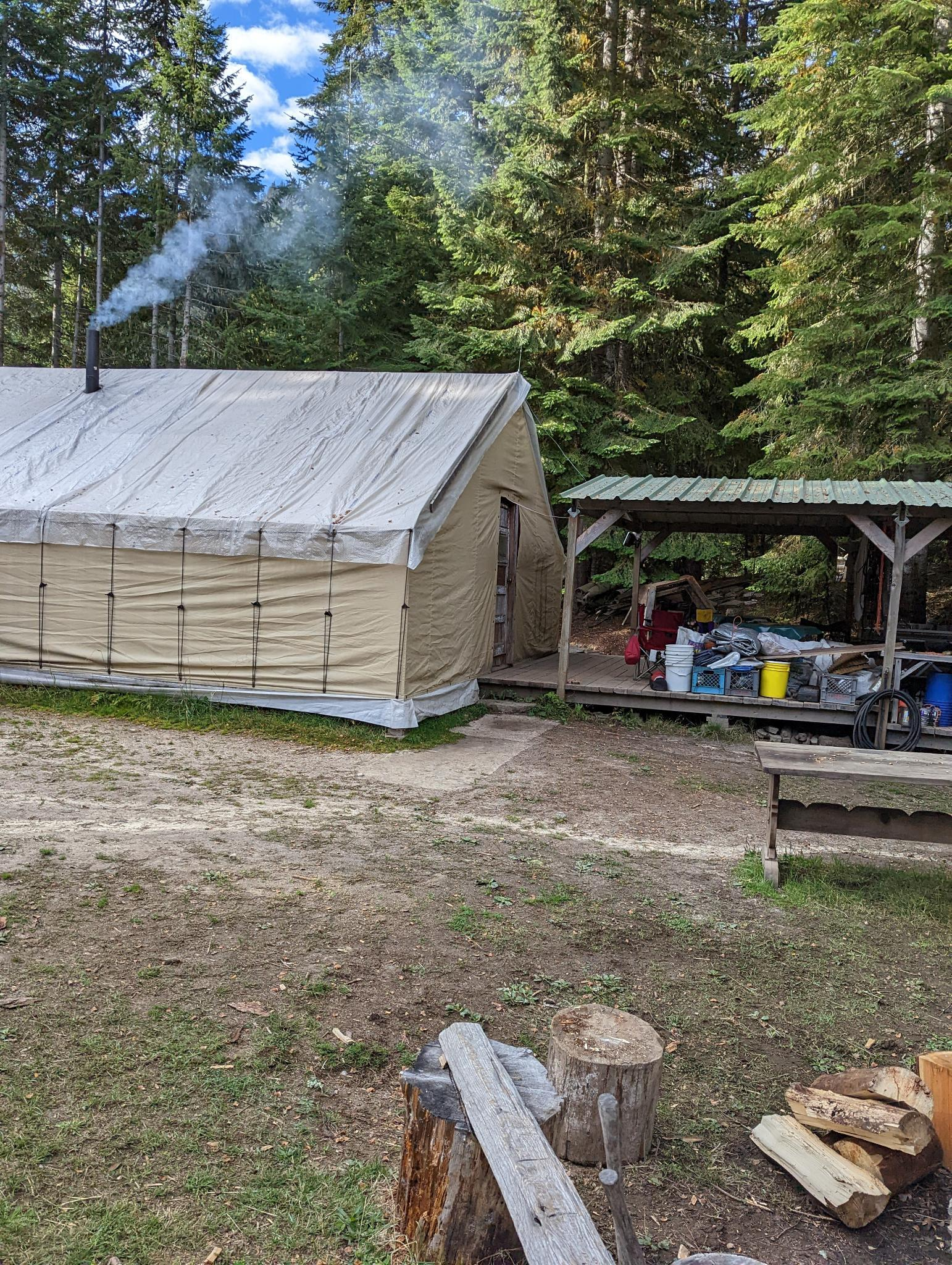 Since there were absolutely no bears around, Dick offered us all a 50% discount to come back, which I expect to take him up on. There is a taxidermist in Weippe, ID that'll do bear rugs for $175 per foot, so a big wear won't likely be more than about $1100.

Since they hunt over bait, best time to go is probably Spring (late May to around the summer solstice) when there really aren't a lot of other food sources for the bears. If we go back, it'll probably be early September in 2023. The tricky thing about the spring hunting is the snow. While base camp is only at about 3500', snow can make the mountain road up to the high camp impassible until June.

If you're budget-conscious like I am and are interested in black bear hunting, I'd recommend you take a look at this outfit, in spite of our lack of success. Dick doesn't go to any of the expos and doesn't advertise because he doesn't need to. He stays booked. If you're interested in hunting with him, black bear or elk, drop me a PM so I can give you my personal info to relay to him, and receive a 10% discount on the hunt. For 1 hunter, you're probably looking at an all-in price of about $5k - the hunt, gratuities, travel, and taxidermy.
Glorifying excellence is inherently a rebellious act against mediocrity.

That is a very nice-looking camp & set-up! Beautiful scenery. I've been on hunts and took no game, but I enjoyed the trip anyway. Sounds like you did that too! Go back and give it another try!

That part of Idaho is very beautiful. The travel over lolo pass down to Orofino area is exceptional. Sorry to hear that no bears showed up. Weather and other food sources can make it a bit difficult. Best of luck next time.
Bruce

Nice pics and report. Sorry to hear that you guys didn’t see any bears. I hunted that area (Nez Perce Clearwater not far from Kamiah) last year in spring and only saw 1 bear, so maybe there’s more to the story. The locals blame it on wolves, but everyone blames everything on wolves!

Dick says he hasn't seen or heard any wolves in a while, at least not since either Idaho or the US forest service came in and killed a bunch of them. There was no shortage of white tails around there. I was snorted by a buck every afternoon around 4:15 (assuming he didn't like where I had been peeing), we saw a few in the horse corral at the camp, and my son saw several over by where he was hunting.

I think they just found another source of food.

My oldest son really wants a nilgai hunt for his graduation present, so I may not be back in Idaho for a couple years.
Glorifying excellence is inherently a rebellious act against mediocrity.

A theory which looks good on paper but doesn't work out in real life is a terrible theory. Reality is always the final arbiter.
D

It has been several years back, but I used to see 3-4 bears and a couple of moose in the elk city and dixie areas every time I was at the cabin, I have an inholding and cabin there.
You must log in or register to reply here.

HENRY GRIFFITHS SAFARIS
Check out the Deals and offers we have some openings for our package hunts in January and April!
Thursday at 9:18 AM •••