i just got back from a great hunt on the alaskan peninsula. i am a guide for litzen's guide service. that said, this was a great hunt, in which all the players on the boat participated in.

the first day out was full of bear sightings, probably saw 30+ bears. lots of sows with cubs, a few boars rubbed, my hunter, mike, spotted a bear on a hill headed to the beach. we took a skiff over to get on him, and he zigged, we zagged and never saw him.

day 2, another decent weather day, i spotted a large boar on a ridge, found him heading down to a meadow. rushed off to intercept him. after some hustling, got within 200 yards. my hunter got set to shoot, the bear moved steadily away, to the alders. hunter was ready, bear was 223 yards still moving directly away. i woofed and barked to no avail. told the hunter to hold off, if it was closer or farther from alders might have tried it, but we passed. a nice 9+ foot bear. bummer.

day 7 another hunter, paul and his guide jason (jason used to pack for me 15 years ago!) and paul's 2 sons made in a breeding pair and paul shot his bear high on the shoulder. then, jason tagged it, paul again, then the bear headed their way. the shootout started at 60 yards, and jason dropped it with a brain shot at 13 yards. all the hunters that got back on the boat were wired!!! very exciting ending and a nice 9' boar.

day 8 had fredrico and my boss, mike going up a bluff on another mating pair. after a solid physical workout, they closed to 100 yards and fredrico shot a fine 8 1/2 ft boar with his 338 ultra mag, 300 gr nosler accubonds, great bullet performance.

day 9 we spotted a very nice bear with a sow a bit over an hour before dark. i discussed with mike and said we should wait till the am. was to late to have an honest chance at it and did not want to stink it up.

day 10, last day. the father and son team spotted the boar we pegged the night before. mike (the hunter), i, a packer and the 2 sons climbed up through the raspberries and alders with a good wind.

an hour and a half later or so, we crept over the edge of the gully and had the boar and his sow located. 161 yards. mike was shooting a 338 ultra mag with 250 gr swift a frames. the boar sat up, mike sent a solid shot in middle of the chest, spined the boar. i whispered to hit him again and mike nailed him with another great center chest shot. "shoulder!" i yelped and mike pounded him again. a great shot that settled things down immediately.

after celebrating, we got to the work of skinning, loading and packing out a mile or so. although it makes a great story, as a guide i was sweating it a bit, getting a bear on the last day. my hunter was a great guy, very upbeat up until the very last minute of our hunt. was a great experience with great guys, the captain and the first mate on the boat were awesome, everything about the trip was just amazing.

i would highly recommend if hunting brown bears is on your bucket list to "git r done!" 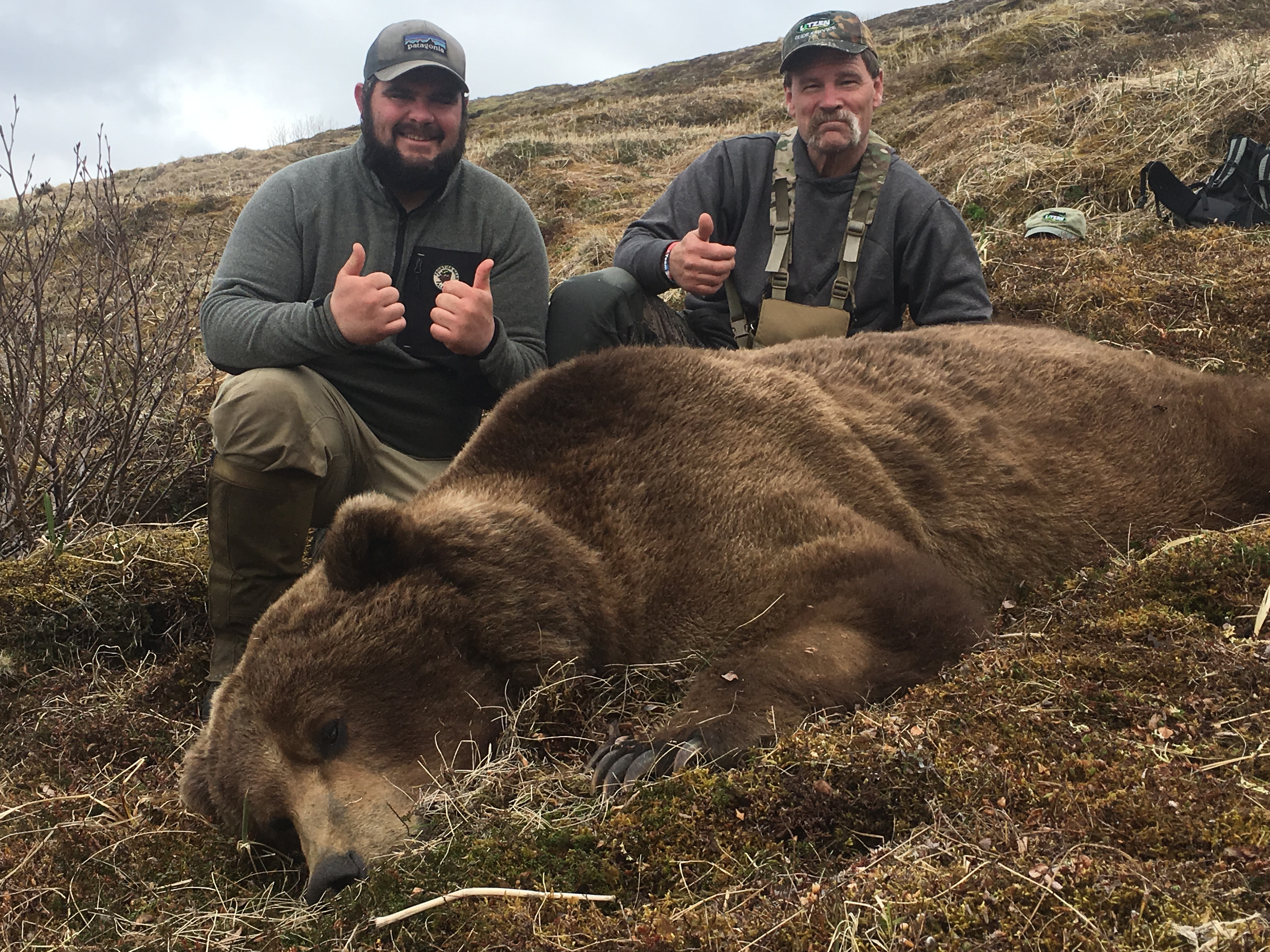 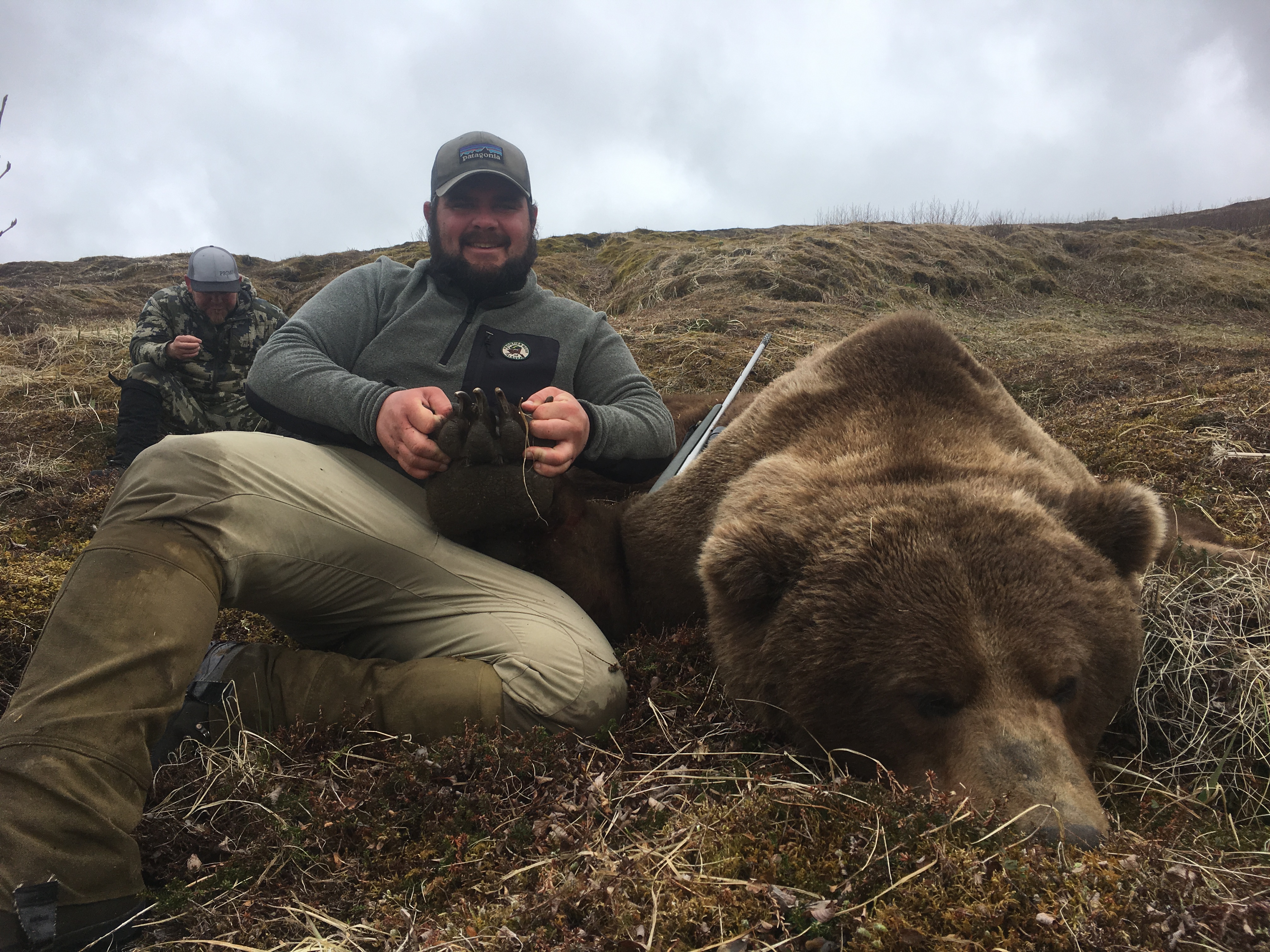 Nicely done congrats! Thanks for sharing, I hope to be able to do this one day!
John 3:16

Great stories! I spent 10 days on the Alaskan Peninsula in 2014, saw a lot of bears but didn't close the deal. Your outfit had remarkable results. Congratulations!

Great story. Especially like the shootout comment! Care to elaborate on cost of ten day hunt aboard a mother ship?

Thanks for sharing the tale.

God report thank you for sharing!

Good job on getting it done. Nice bears. Love the pics.
Bruce

I sent you a PM.. was the brown bear shot to the chest videoed? I'm asking because I am an admin on a hunting page in alaska on facebook and I seen a video posted.

huntinlabs said:
I sent you a PM.. was the brown bear shot to the chest videoed? I'm asking because I am an admin on a hunting page in alaska on facebook and I seen a video posted.
Click to expand...

yes, the bear being shot was videoed. i was a bit reluctant to post it here. was great shooting on the clients part. thats why i did not get involved.

1dirthawker said:
yes, the bear being shot was videoed. i was a bit reluctant to post it here. was great shooting on the clients part. thats why i did not get involved.
Click to expand...

If is the video I seen it is a great video. I enjoyed it for sure.

as an after thought,

the client just called, after cleaning it better it was only 27 9/16", still, not bad

Congratulations. Thanks for sharing.

Ive tried twice on Kodiak and didn’t get a shot. 20 days of wet! Maybe I’ll try one more time somewhere else. You got my adrenaline going again.
Thanks for sharing!
Africa on my mind.
You must log in or register to reply here.