This year my son carried his first elk tag up the mountain. One day before the Colorado third rifle season had me picking him up alittle early from school to set up camp. Day one of the hunt found us in the pitch black dark hiking in. About half way to the hunting area he asked me if I adjusted my clock. What day was I supposed to do that? Needless to say we sat for about a an hour and twenty waiting for the sun to start rising. The rest of the day we hunted saw two deer, only a few shots in the distance. The second day started with the correct time and was just like the first. Next day we had a bull bugle not far from us. I'm leery of a bugle on public land but this guy was for real. He was horse and you could tell from the throaty gutteral sound at the end. We closed in somewhat slowly hoping to see a cow but he was moving away fast bugelling the whole time. We ran out of public ground but he was circling back. I assume they were looking for a place to bed, then went quiet. We were going to head back to an area that has been productive in the past but decided to make a big circle instead of a direct shot to the valley. I have a good way of getting into the nastiest tangled blow down mess you never want to be in. While in the blow downs I smell elk. I look at my son and mouth to him do you smell that it's elk. A second later there is a bugle real close, followed by a few more. We try to make our way toward it but it's to noisy. We crossed the trail the elk were on about 30 yards later. They didn't spook and crash out of the area like I'm used to. They slipped out quietly. Upon reaching our destination turns out they were at the top of the valley as we were heading that way in a round about manner. The following day was cold, still and not an animal to be seen. We were out of time. We found two good spots this season and both are pieces of the elk puzzle in the travel routes and where they may feed in safety. So he didn't fill at tag but we had a great time together. Every teachable moment that arose I took the time to explain and inform him. I gave him advice and options as we discussed the days activity or next move with him being the decision maker. His rifle handling was second to none. He was 100% aware of where the muzzle was pointed at all times. He hunted hard carried his rifle and pack with out a complaint. His insight was useful when planning as I'm used to the area and he had his own perspective. The attention to detail was amazing. He noted the differences in the two bulls bugle and said he didn't think it was the same elk we just left earlier. I told him elk hunting public land is hard. You need to keep a positive attitude and if it becomes more like work stop, relax or take a nap. Enjoy being out here in nature forget hunting for a bit. By the fourth day he was leading me around waiting for me to catch up. On our last hike out...me trailing, I'd be a liar if I wasn't tearing up. The season was over for us and I was recounting the previous days. How he handled himself, the hunt, his gear. The young man and hunter he is becoming. 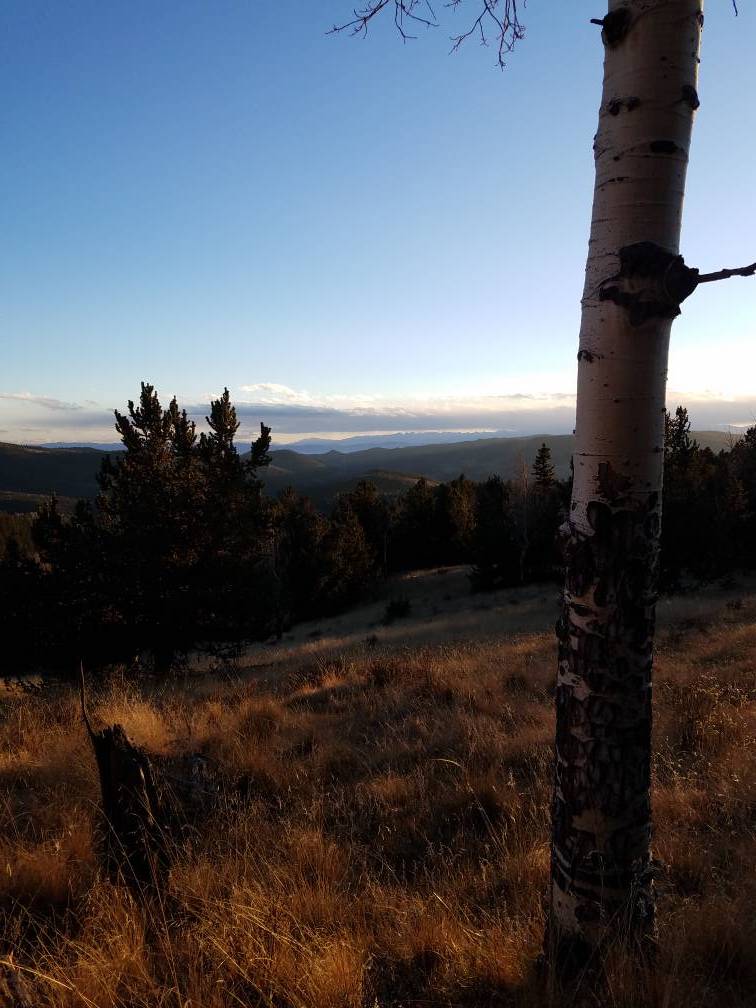 Nice story, pic looks properly aligned to me. Awesome your son got to hear them bugling. Makes all the difference for me whether I tag out or not.

Beautiful pic, love that area of the country! Glad you got some time out there with your son, family time is what its all about!
John 3:16

Thanks. I never hunted third season. I didn't think the elk would be vocal at all, let alone repetitive like they were. Also didn't think bulls would still be with cows, but the droppings said otherwise. Maybe younger bulls?

It sounds like your boy was paying attention. Next year he will be even more ready. You do not need to bag an animal to have a successful hunt. I'm betting that both of you enjoyed yours.

Love it! Thanks for sharing. I don't have a son, but taking my son-in-law on his first elk hunt. We leave this coming Sunday for a week in Montana.

Thank you for sharing. Never done an elk hunt myself and it's on m bucket list.

Good job hunting! Thanks for sharing, time with family in the wild is precious.
It'not the years, it's the mileage......(Indiana Jones)

When you hear an elk bugling close by it really gets my heart a pumping. Sounds like a great hunt despite no meat to bring home. Enjoy hunting w/ your son while you can. Sometimes it ends all too soon.....
Bruce
You must log in or register to reply here.