I became interested in a Mountain Lion hunt with Seven Anchor Outfitters based a review I read here on Africa Hunting. I looked at some Colorado outfitters (I am in Colorado) but the more I read about Seven Anchors the more I became interested. I called Logan Anderson, the owner and guide and spoke with him about booking a hunt. Logan explained how the hunt was conducted, what type of firearms they normally used/recommended, etc. He was easy going, explained everything. I thought it over and called him back a few days later to book my hunt.

Logan had said they normally use something like a 30-30 lever gun with open sights for the hunt. I didn’t have a lever gun but I do have a Heym 26B in 7x57R. It’s an O/U, small, light, perfect for this hunt. I removed the scope and zeroed it with the iron sights. My eyes not being what they used to be, I realized I would best served by putting a Red Dot on it. A Docter was my only mounting option so I ordered up a Docter and mount and hit the range. Much, much better. I zeroed at 50 yards and practiced all ranges between 10 and 50 yards (occasionally going out to 100) the top and bottom barrels were hitting less than an inch apart at 50 yards. Excellent.

I can’t stress this enough, this is a physically demanding hunt. It is conducted on horseback though nasty, rugged, tough country. I did not realize how tough it would be. Thankfully, Logan’s horses and dogs are up to the task.

The dogs. I have never seen animals like these dogs. Pure heart and soul, they hunt with everything they have and just won’t quite. It was awesome watching these dogs work.

I drove down to Arizona the day before the hunt started, met up with Logan, chatted about the hunt and got settled in. I stayed in a very nice and comfortable 5th wheel. Plenty of room and super comfortable.

We headed out at 0530 the next morning. Cody, one of the other guides joined us. We got the Prescott forest around 0715, waited for sunrise, got the horse ready and hit the trail. By trail I mean nasty thick bushes, trees, loose rock hills and all around rugged country. I had very limited horseback experience and I had to learn quickly. This was a horse following the other horse trail ride, this was serious riding. Right around 0800 we found a very fresh track in a wash and the dogs were on it. Problem was they were heading the wrong way. The track pointed on way and dogs chased it the other way because it was so strong. Logan got them turned around and the chase was on.

We rode through nasty, nasty stuff. My legs were getting torn up, I now know why Cowboys wear chaps. It isn’t cause they look cool. At one point my horse, “Helo” rode me into a tree branch and slide me right off him. Thankfully I landed on my feet and got back on. Cody had a good chuckle at that. We rode for several hours following the dogs via their GPS collars. By 1100 I started to get sore and my right shin was pretty beat up. We had the rifle scabbard straight up and down on my right side, every time I rode close to a tree branch or bush it would jam into my shin. We hit some pretty steep, rocky, slippery trails. It was no joke. I realized I just had to put my faith in my horse and let him do what he was trained to do. We stopped 2 or 3 times for a quick rest and drink of water but we were in the saddle pretty much the entire time. Each time I had to get back in the saddle it was tougher and tougher, my body was sore.

At about 1-ish my horse decided he was gonna test me and would ride into trees to try to get me off and just stop, refusing to move. “Kick him hard” were the words of advice I got. He was just as worn out as I was. It was unusually hot (around 70) and the dogs, horses and I were all hot and tired.

The country out there is beautiful. You forget the pain when you are on a mountaintop looking out over what seems to be forever.

At around 230 the dogs were really on it. Cody told me “come on we need to catch up with Logan” About 250 we got with Logan and the dogs had the Lion corned! “Get you rifle” and let’s go. We ran to the rock outcrop where Logan was. “He’s right down there” Logan yelled. I looked and there he was. About 50 yards away straight down at a pretty steep angle. The dogs were at a steady bark, it was amazing.

His head was hidden by a rock as he hissed at the dogs. I got the Red Dot on his shoulder and just as Logan was saying “Shoot him in the shoulder” BOOM, I fired! Perfect hit in the shoulder, he rolled of the rocks he was on. He got up for a second then went back down. “Good shot” yelled Logan. I had the Dot on him ready to hit him again but within a few seconds the dogs appeared. I didn’t want to shoot around the dogs and I knew they would not let him get away.

Cody and Logan ran down there and Logan looked up and gave me the thumbs up, he was done! I then slowly made my way down the loose, steep hill. I was trying not to end my hunt with a 100 foot tumble and beat up gun. I got down there and he was big. “What a huge Tom, great job” I think Logan and Cody were just as excited and happy as I was. He was beautiful. I was elated. We took a bunch of photos, put the Lion on Logan's horse and headed back.

We headed back to Logan’s ranch and I couldn’t wipe the smile off my face. But boy I was battered and bruised. My first thought was thank goodness this hunt is finished in 1 day, not sure I could have lasted 4 more! We got back the ranch, had dinner with Logan’s wonder family, drank a beer and hit the showers.

When I got back to my room my legs were in a spasm. My shins were cut up and my right shin was black and blue. My hands were torn up, I had a puncture wound on my right thigh from a branch that didn’t bend and a huge bruise on my chest from where the rifle butt would bash into me anytime I put myself forward on the horse and whenever we trotted. I could barely walk Tuesday and driving 11.5 hours back to Colorado was not much fun. Wednesday I could barely walk up and down stairs in my house. All worth it though.

It was all worth it, I would do it again in a heartbeat. 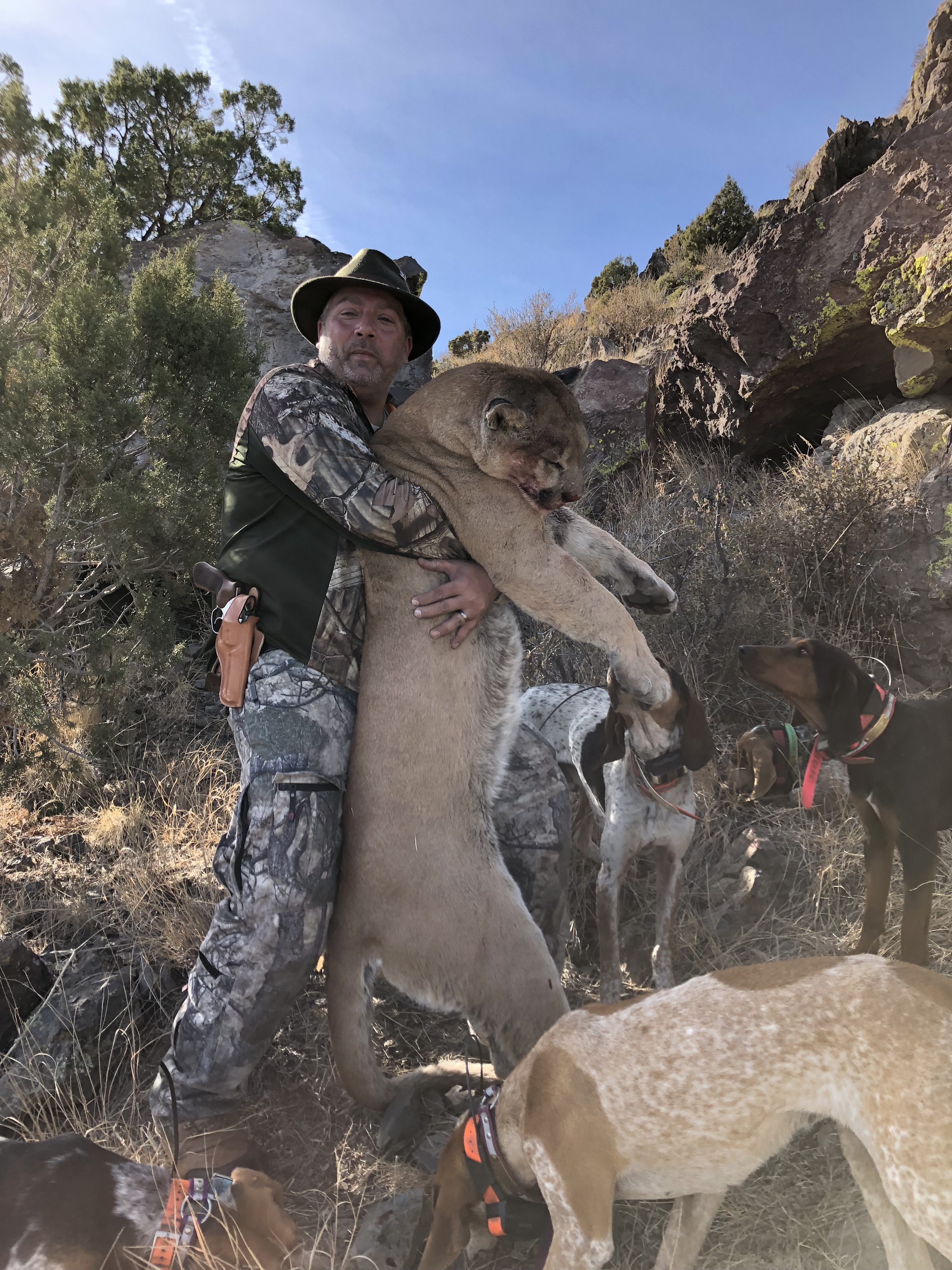 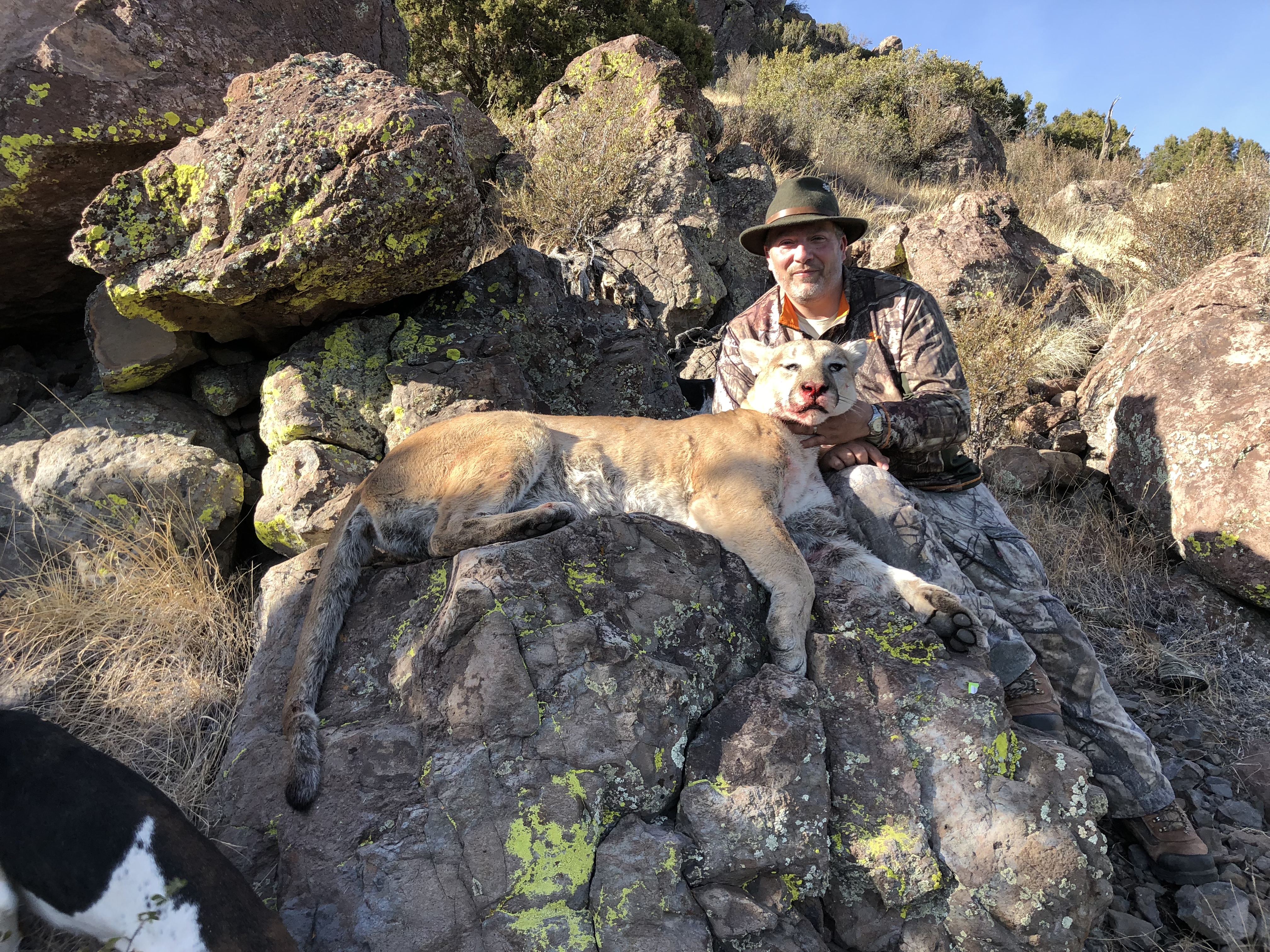 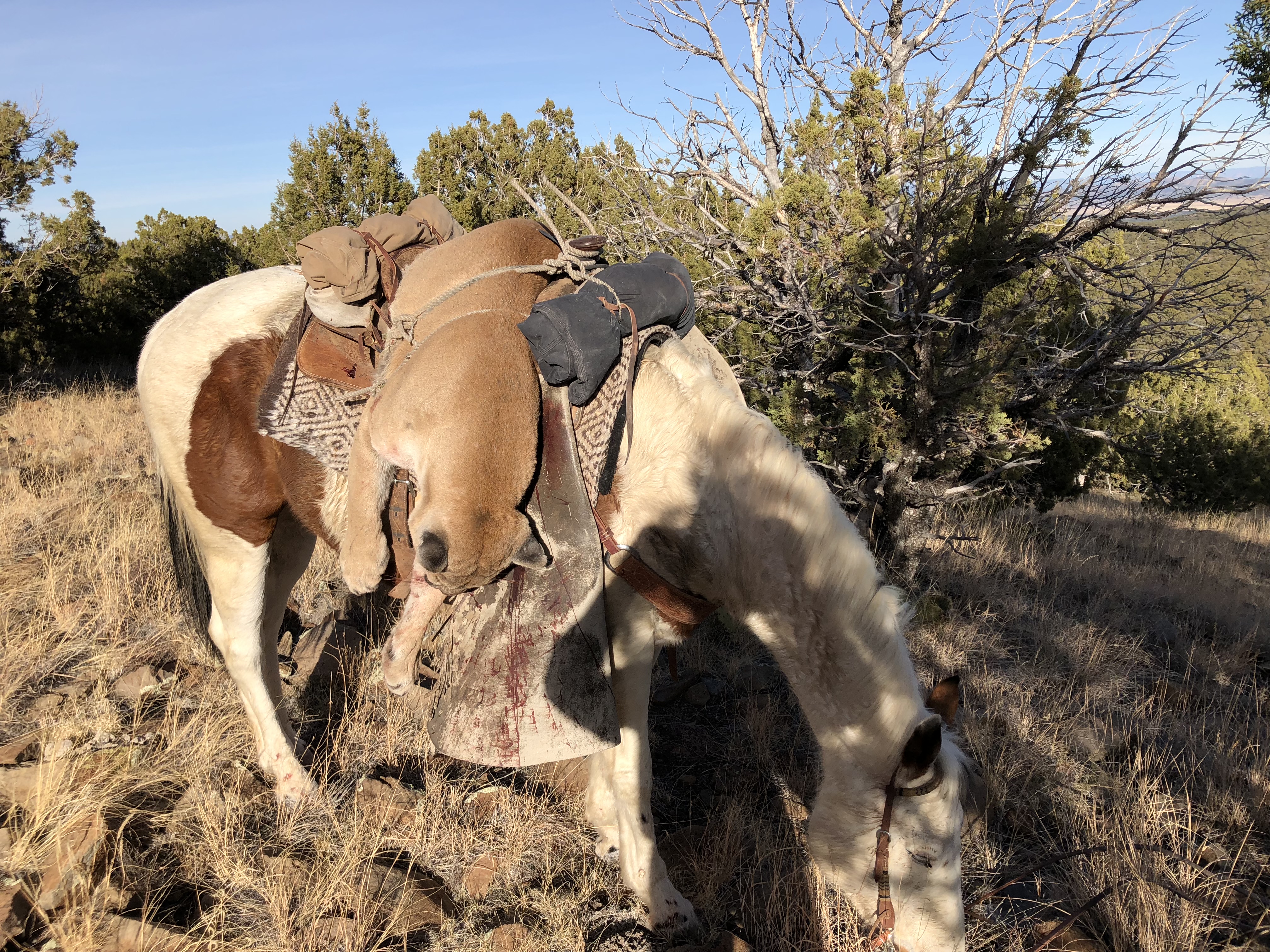 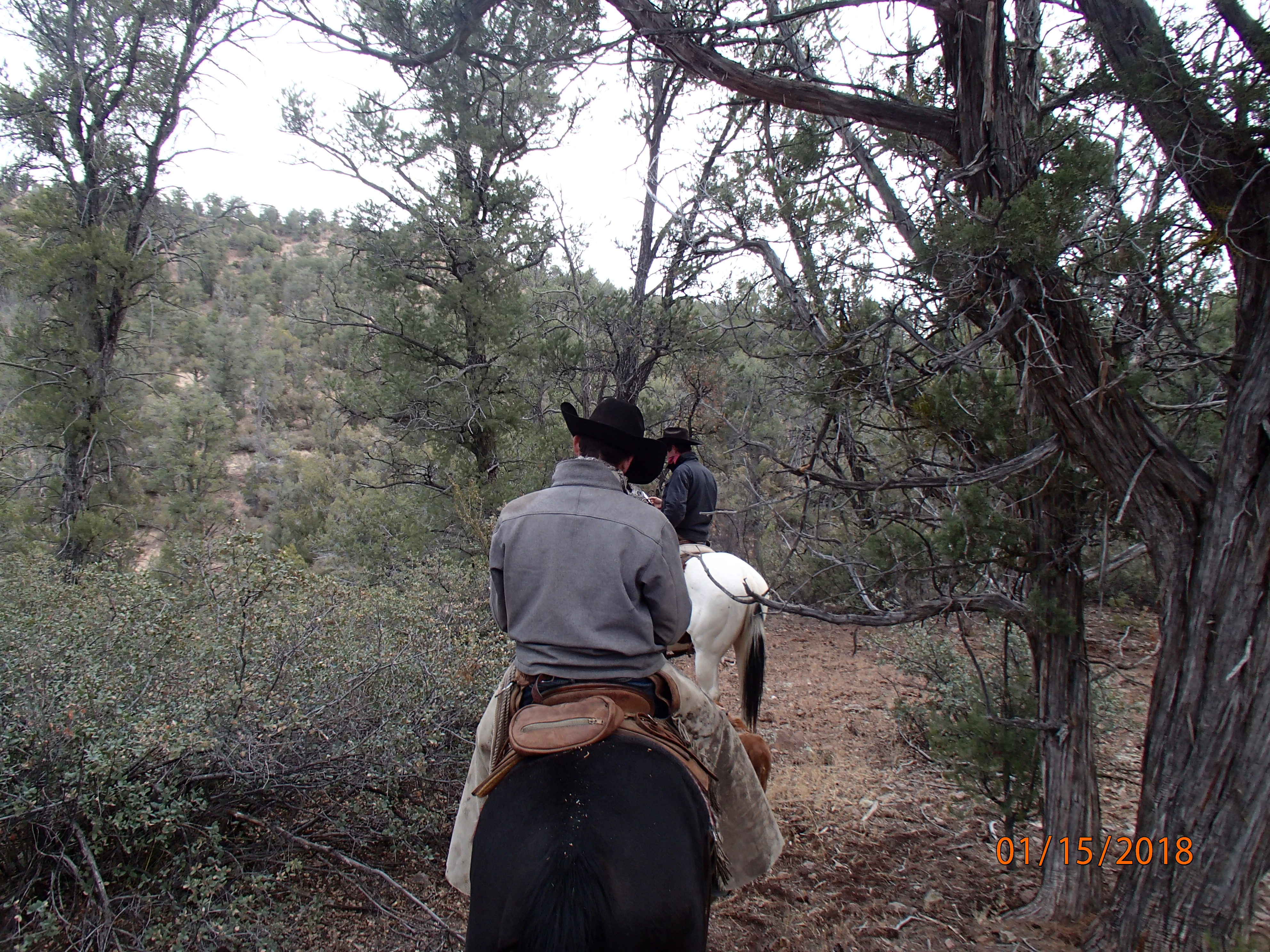 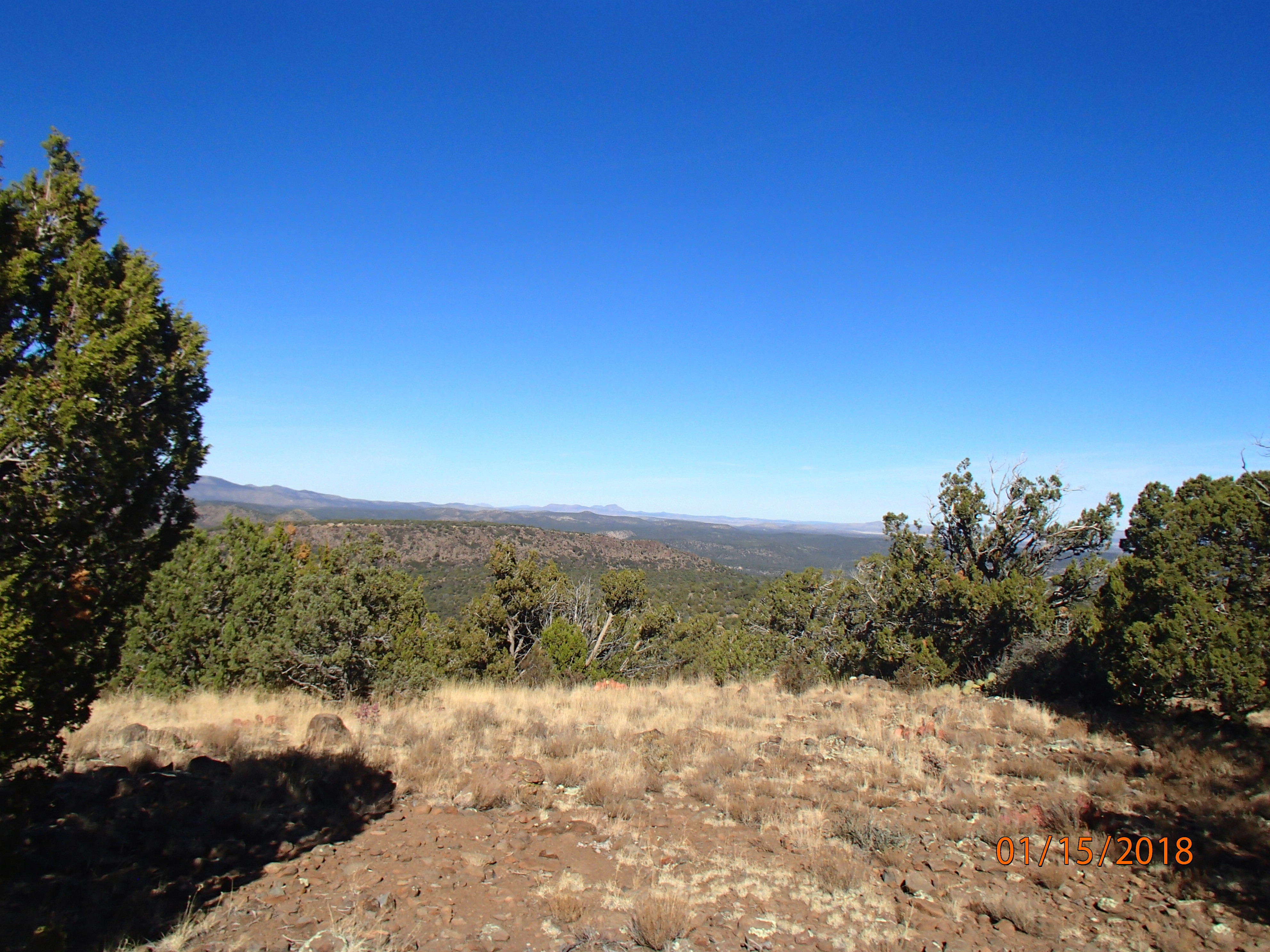 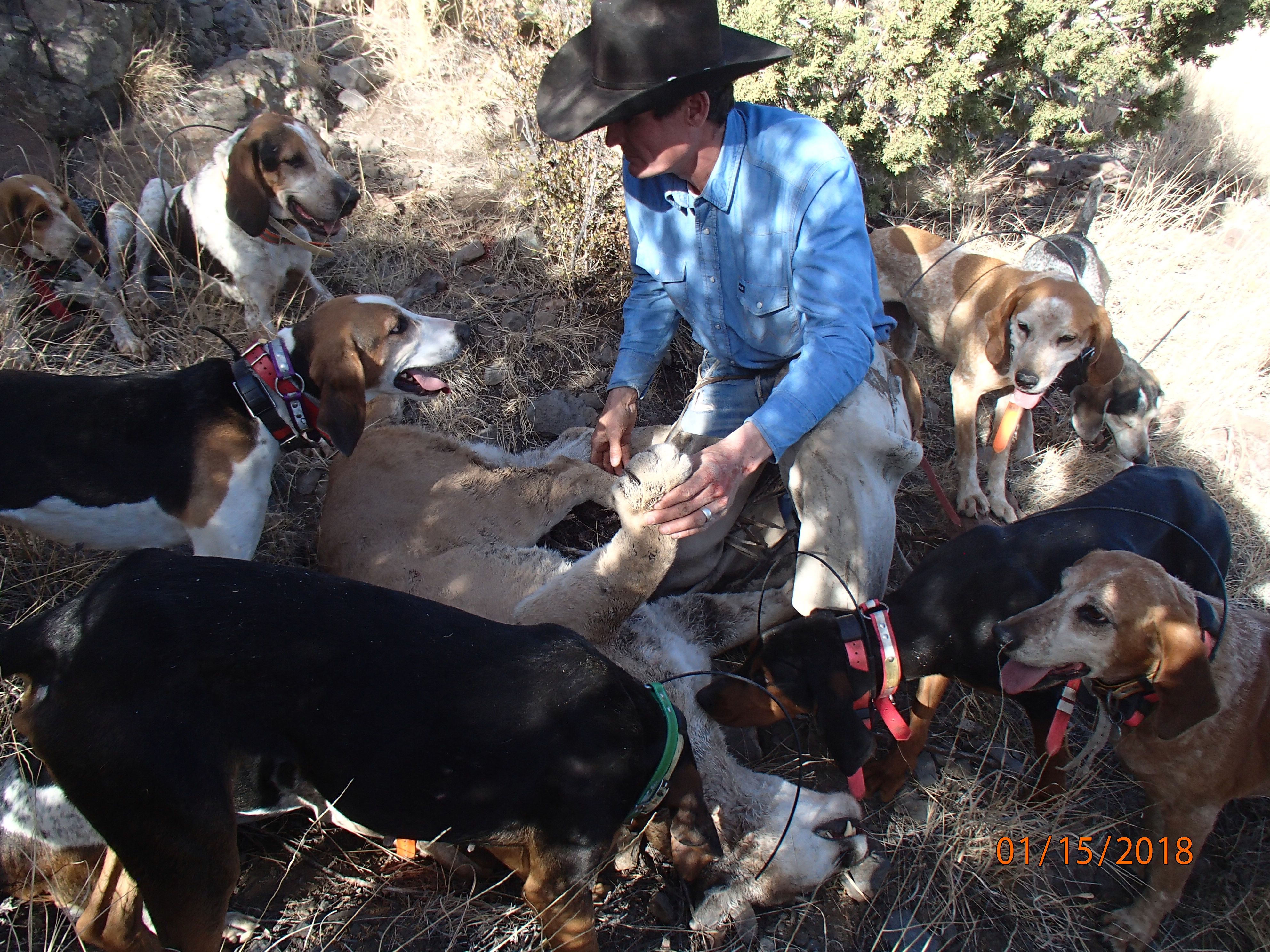 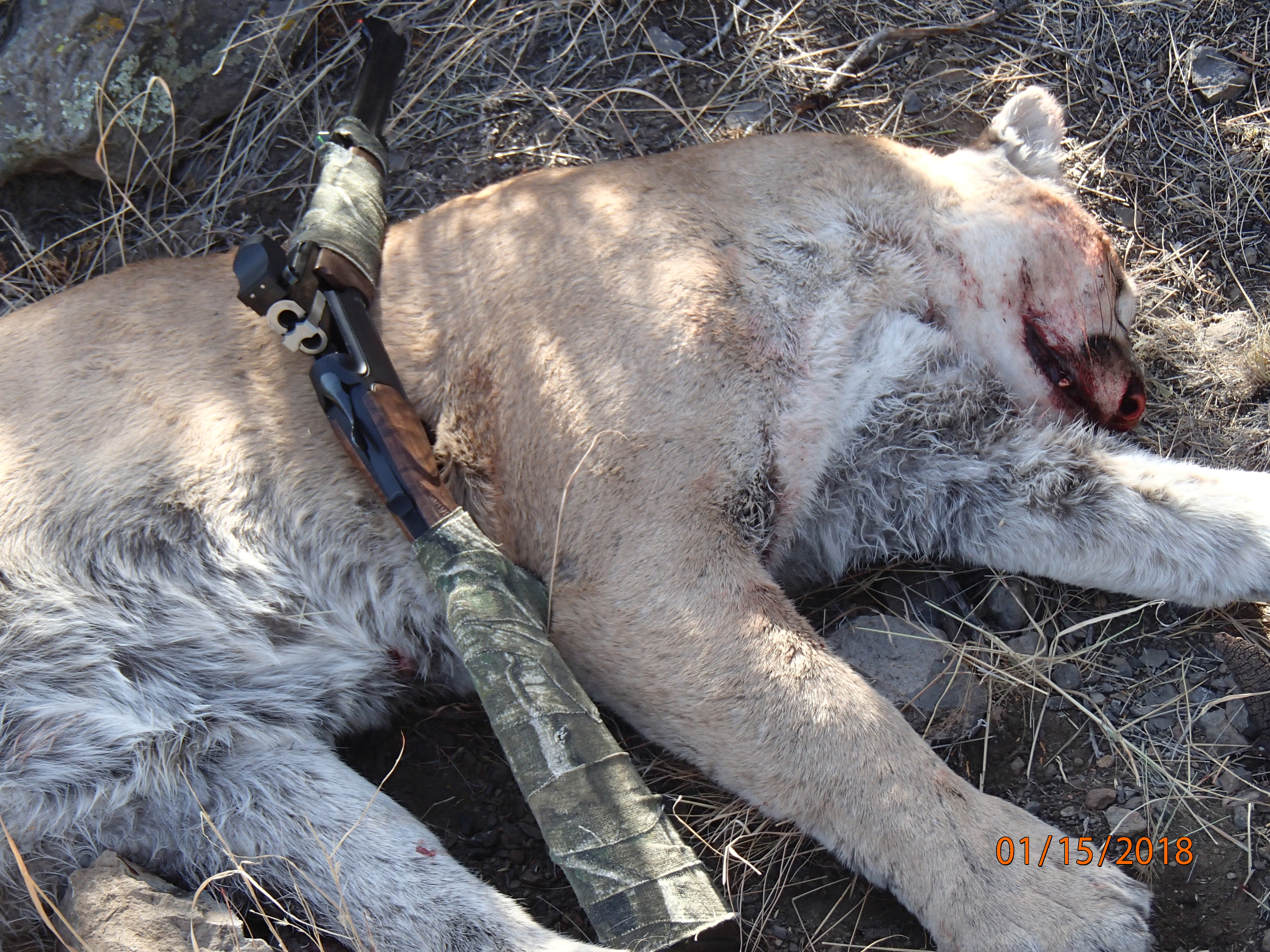 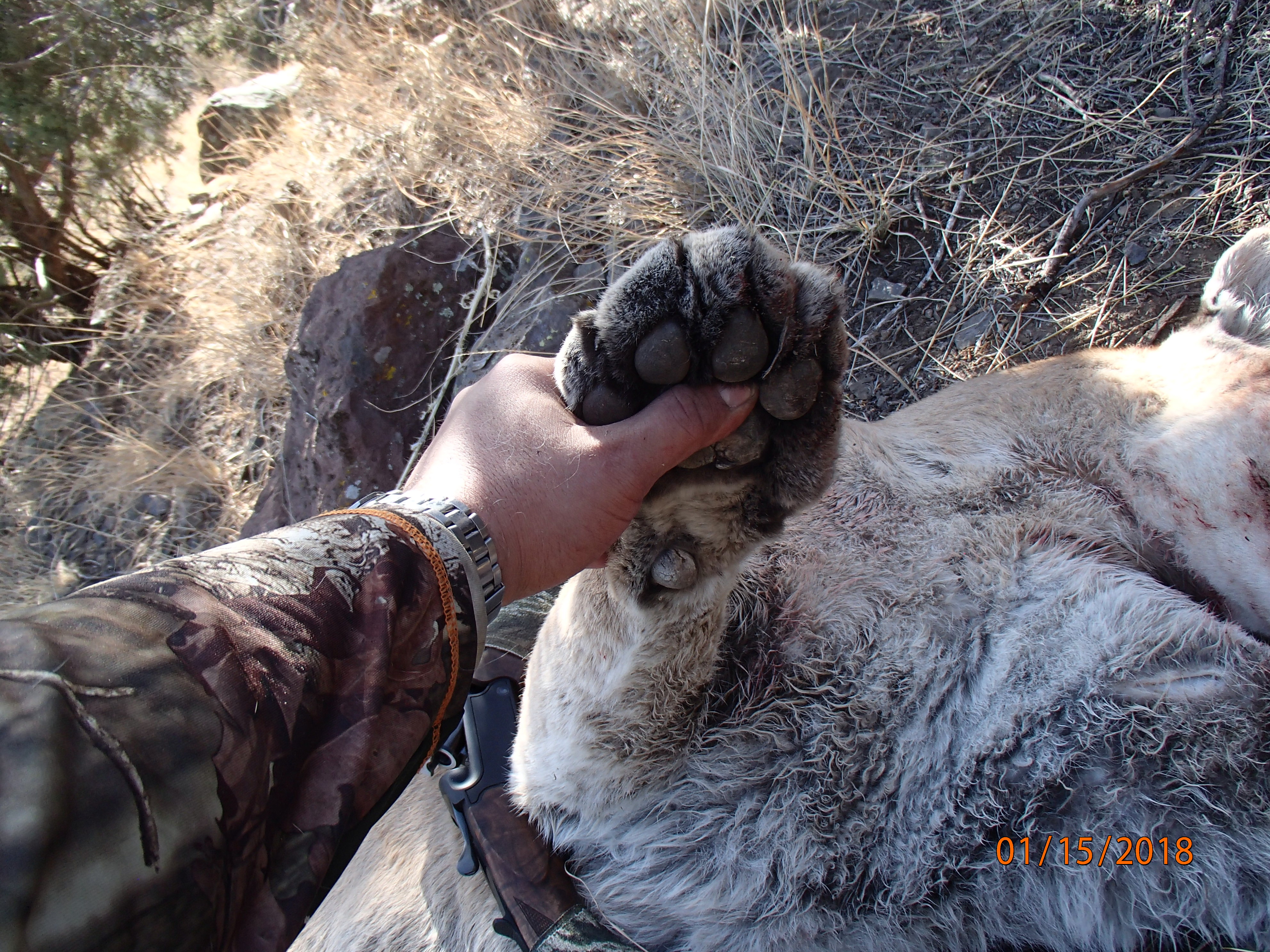 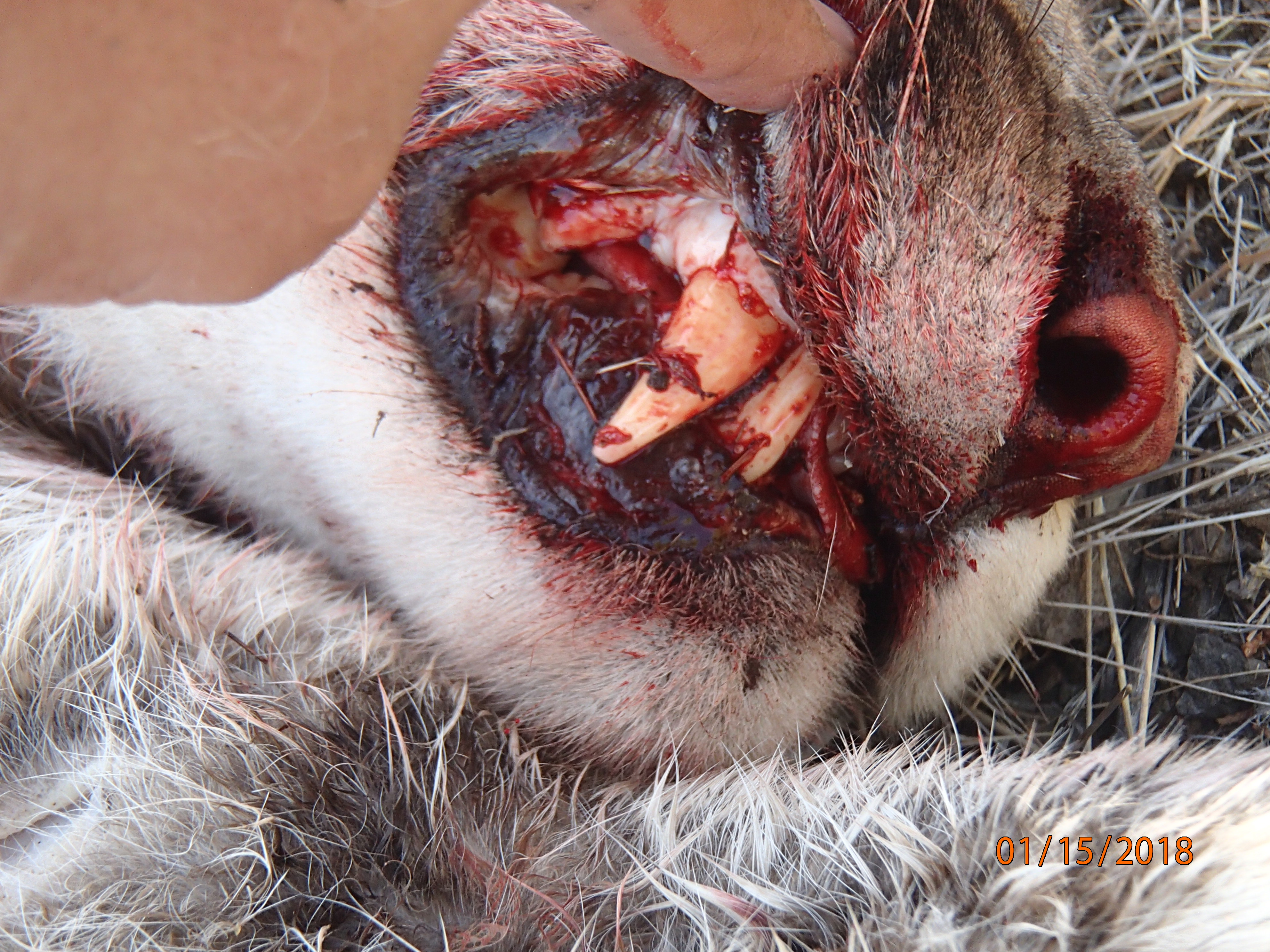 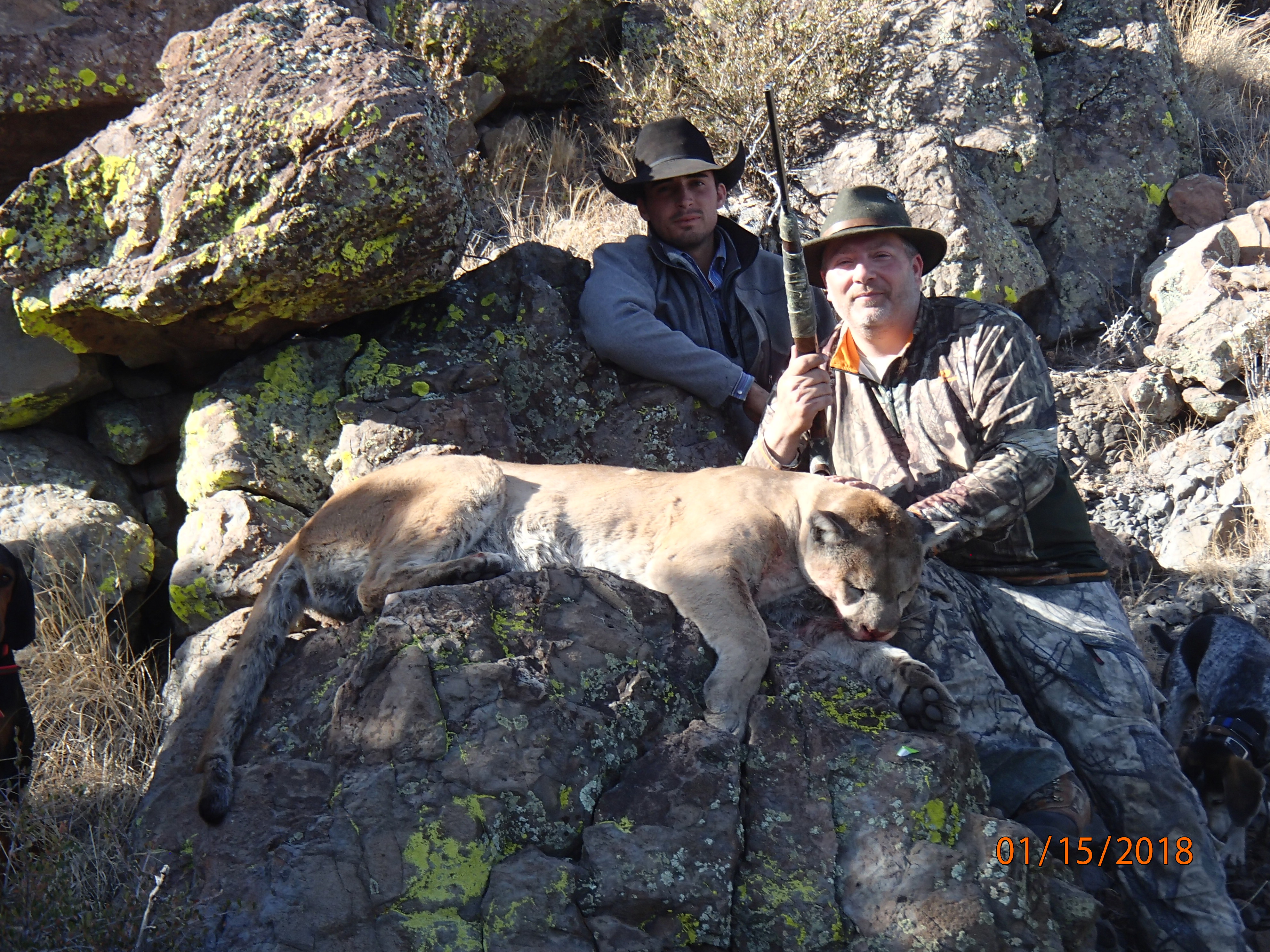 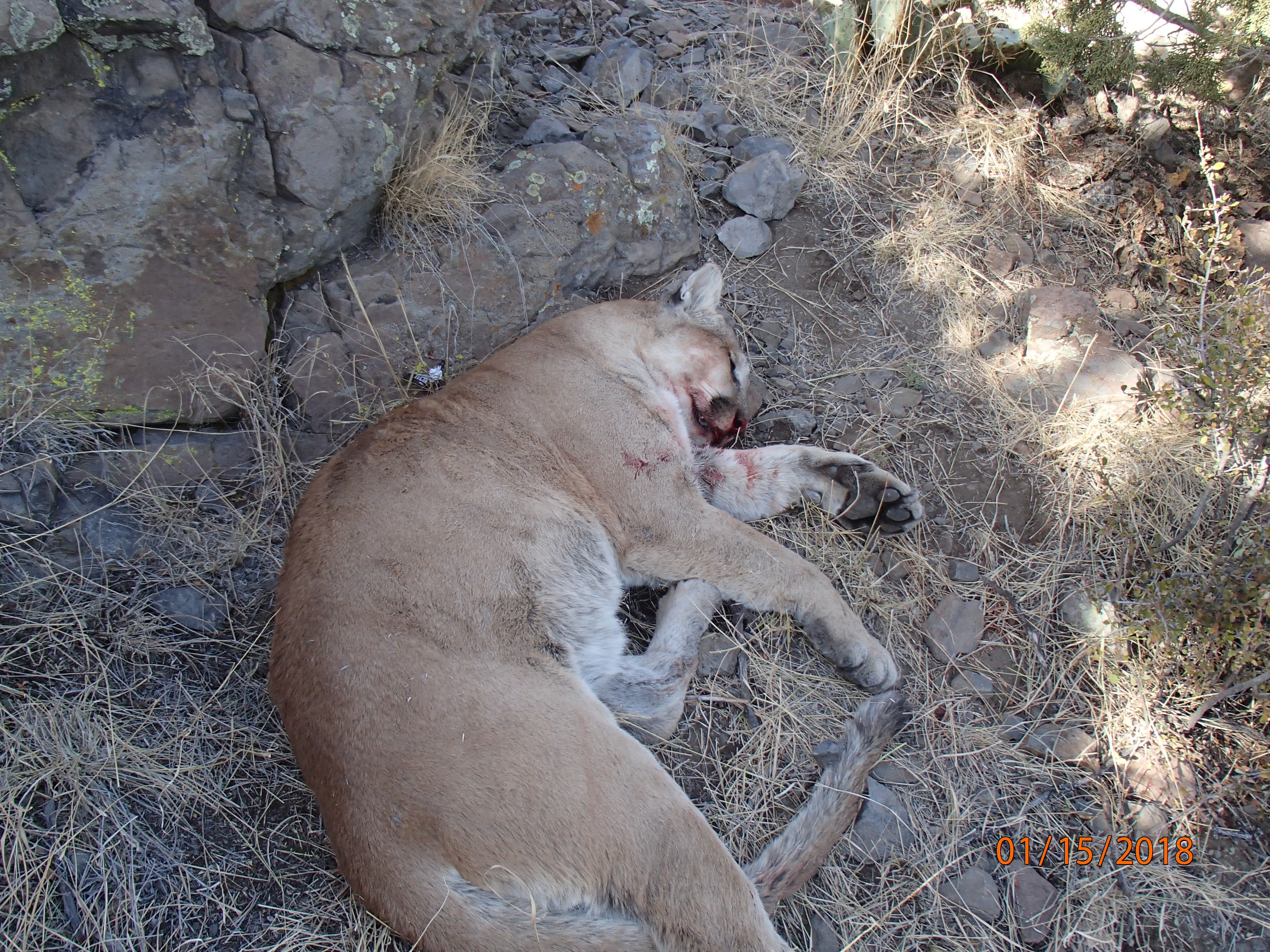 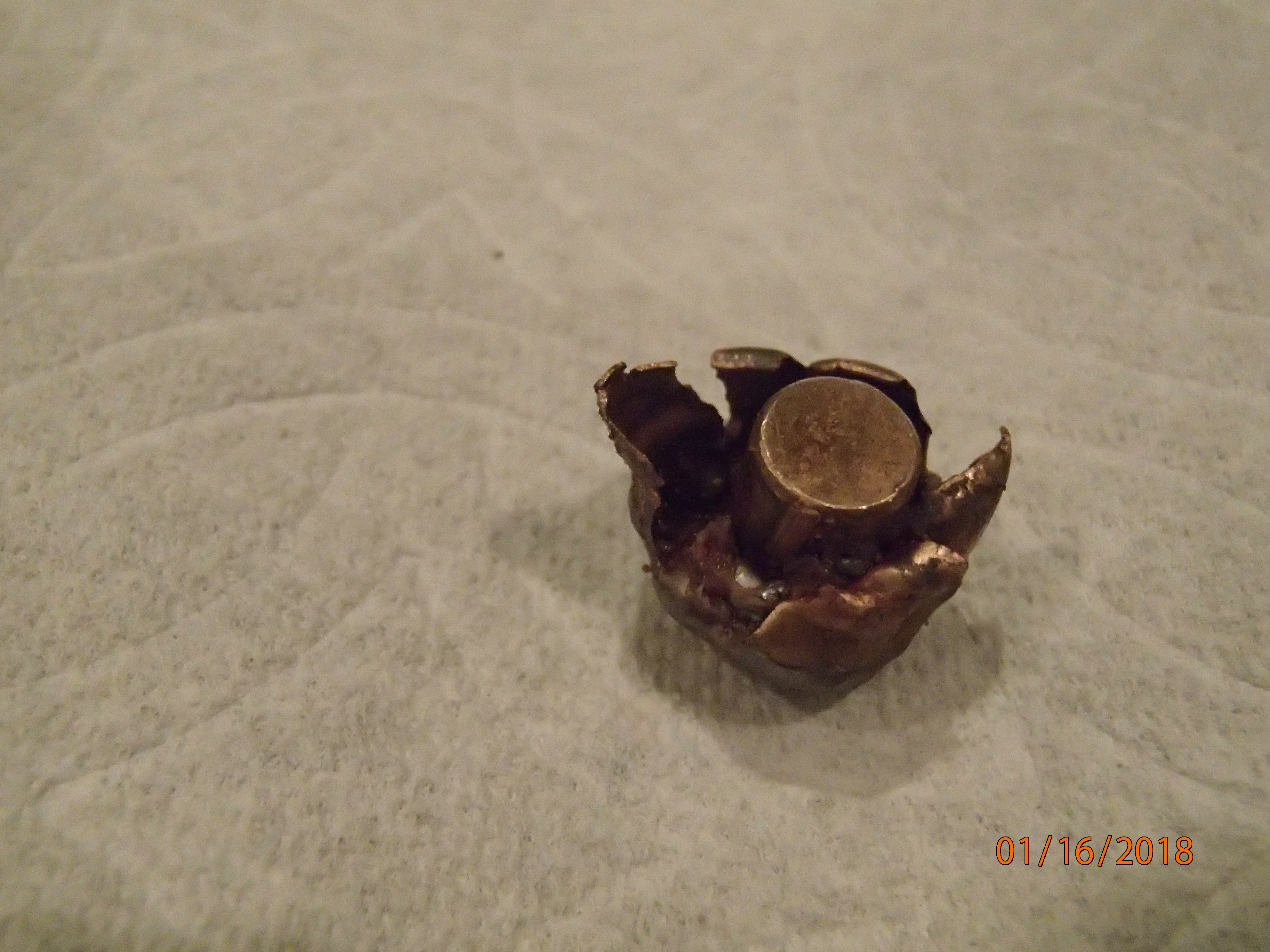 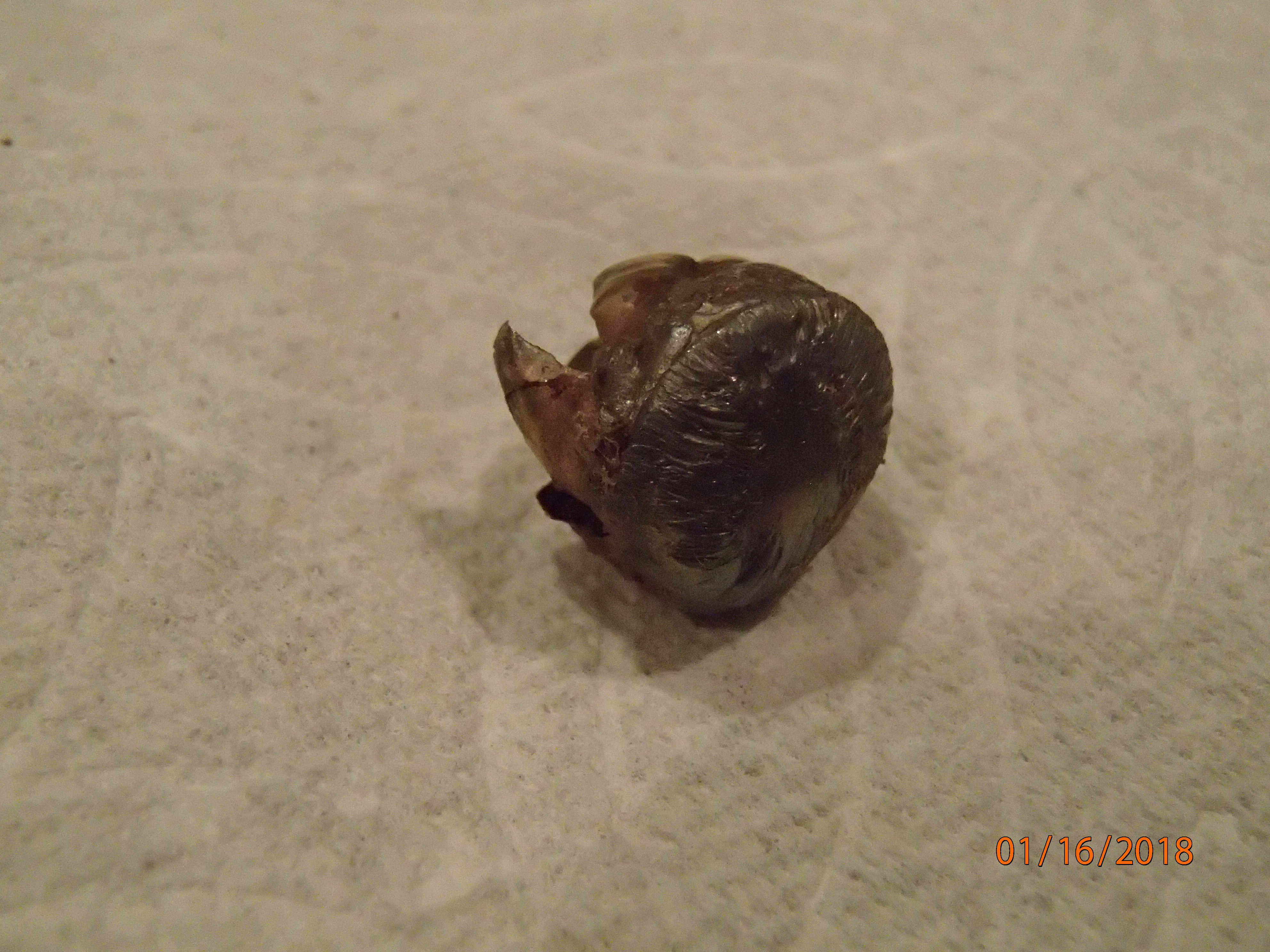 Got a few pics of the bullet we recovered from the Lion, Geco ammo did it's job.The Lion weighed in at 137.5 lbs and initial skull measurement of 14.5 inches.
Last edited: Jan 19, 2018

Well done! One thing we do not lack here in Arizona is mountain lions. Dang horses, some of them know a new rider and will do that trick with the trees to get you off of them. Just have to know before hand when it's coming and lay down the law with the horse.

Congrats on the cat, should make a great full body mount!

PHOENIX PHIL said:
Well done! One thing we do not lack here in Arizona is mountain lions. Dang horses, some of them know a new rider and will do that trick with the trees to get you off of them. Just have to know before hand when it's coming and lay down the law with the horse.

Congrats on the cat, should make a great full body mount!
Click to expand...

Thanks much. Yeah that horse knew I was newbie and he did his best to beat me off!

Glad you toughed it out. Congratulations on a nice cat.

Nice cat!
Is that a Diamond D holster you have there?
Silence, Speed, Violence of Action.

Awesome job and congrats!!! Maybe the hunt report you were referring to was mine? I also connected on a great cat with Logan in the past! Congrats again and thanks for sharing!
John 3:16

Congrats on the tom. Beautiful cat!

Nice kitty. That hunt is on my list for sure. Good job on a tough day.

markferrigno said:
Thanks much. Yeah that horse knew I was newbie and he did his best to beat me off!
Click to expand...

Man, what a great hunt and write up. Thanks for sharing your experience. Oh yeah, awesome cat!
"Every man dies. Not every man really lives". William Wallace

Great report. Gorgeous country up there!
"Your imagination is your preview of life’s coming attractions." ~ Albert Einstein

@markferrigno, The part of your story about the horse's shenanigans brought back memories for me. In Texas, I was on a trail ride to a cowboy breakfast at some dude ranch and I swear my horse was going out of its way to go under low tree branches trying to knock me off. I think she was someone 's ex-wife in a previous life.
"Every man dies. Not every man really lives". William Wallace

Abeln said:
Nice cat!
Is that a Diamond D holster you have there?
Click to expand...

Hogpatrol said:
@markferrigno, The part of your story about the horse's shenanigans brought back memories for me. In Texas, I was on a trail ride to a cowboy breakfast at some dude ranch and I swear my horse was going out of its way to go under low tree branches trying to knock me off. I think she was someone 's ex-wife in a previous life.
Click to expand...

It took me a while to figure it out LOL I thought "hmmm, he sure likes to walk close to trees" The guides gave me a quick lesson in teaching the horse who is the boss....
You must log in or register to reply here.

Rickmt Justbryan Rickmt wrote on Justbryan's profile.
What is your new shorter rifle? Thanx Bryan !
Today at 3:16 PM •••
R
raamw neckdeep raamw wrote on neckdeep's profile.
Supply your address so I can get shipping Paypal Friend (no ) fee) is fine
Friday at 10:09 AM •••