Here in the Pacific Northwest, Washington State, we have a large population of black bear. 30,000+ animals. Twenty some years ago a popular vote (what a way to manage game!) outlawed baiting and hound hunting, so we've largely turned to classic western "spot and stalk" hunting. Calling can also be productive...

My home in central Washington is on the eastern edge of the Cascade Mountains, and is an area known to have a good black bear population. The species of "black bear" actually comes in many different "color phases" as they're called here: black, cinnamon, blonde and chocolate. Sometimes a bit of a mix as well. This holds true in other parts of the Northwest as well, including British Columbia, Washington, Oregon, Idaho and western Montana.

Mature boars here usually go about 300 - 350 pounds in my area. A few years ago an out-sized, salmon fed bear of over 600 pounds was taken!

They're not normally aggressive, though if wounded and followed into the brush, they can and will defend themselves. Black bears actually kill more people than grizzlies, though grizzlies of course are very much respected for their physical power and ferocity.

The trophy of a black bear is both the hide and the skull. The meat can be very good, depending on the bear's diet. If he's browsing on berry bushes, the meat is often a slightly sweet, dark red meat. Similar to, but perhaps better than good beef to my taste. If he's been eating rotting salmon, or rotting deer and elk carcasses... Well, the meat isn't worth taking. Often in the spring bears will graze on long, green grasses, but may also eat winter-kill deer and elk carcasses.

My son and I do a fair bit of bear hunting, by spot and stalk. He normally uses his ancient 30-06 Model of 1917, with a 6x scope and 165 grain Nosler Partitions. This is a great combination for black bear. I've also used my 30-06 Remington 700 with Nosler Ballistic Tips, but have also relied upon my 375 H&H Ruger Number One single shot. My sons call that rifle "Dad's bear rifle."

A typical day involves getting to a high point where we can observe a likely area. One such area has a long-abandoned homestead, with the remnants of an old fruit orchard. Nice! There is also a water source, and above the old homestead there are many berry bushes.

We get in place before sunrise, and as the light gathers we scan hard though our binoculars for bear. This is very steep, rugged country.

If one is seen, we watch. We try to anticipate the bear's travel, and intercept. Or simply stalk as close as possible while he's feeding. Then the bear is ranged, and the shot taken. This may be near, or as far as 150 - 300+ yards. Hopefully the bear is killed with the first shot. The bear though is a very robust animal and can run a considerable distance if only one lung is taken. Even with a broken shoulder or leg, the bear can cover ground very rapidly.

Sometimes we will hit one, and it will quickly make for the thick cover in the deep ravines.

Suddenly this changes things. I've followed up several wounded bears in the brush. One, wounded by another hunter, I ended up shooting at about 15 feet (five meters) in the brush, with my 375 H&H! Quite an experience. Briefly, before I saw him, I could hear the bear moving, and even breathing, but I could not see him. Finally I saw part of the bear and shot. That ended things.

We skin the bear quickly, to best preserve the hide. The hindquarters and the "backstraps" both hold very good meat. Depending on the bear's diet. 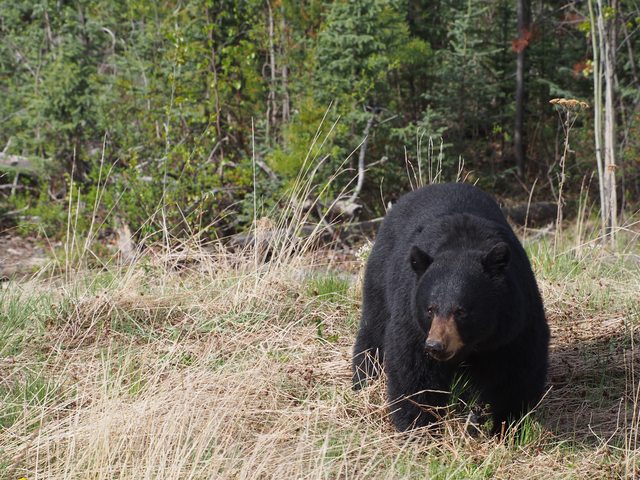 My son with his first bear a few years ago, Washington State, taken with a 30-06: 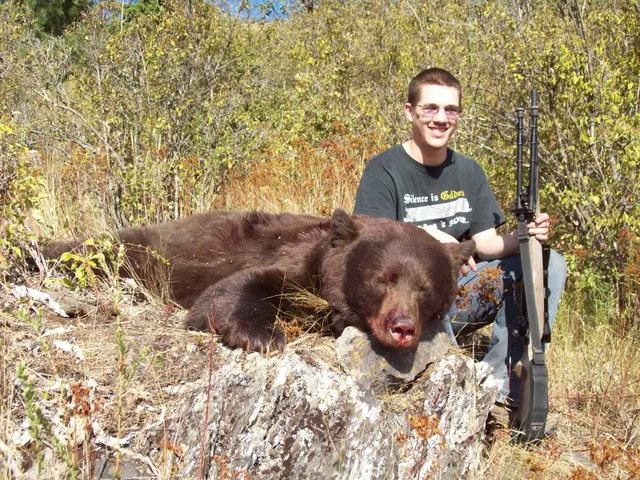 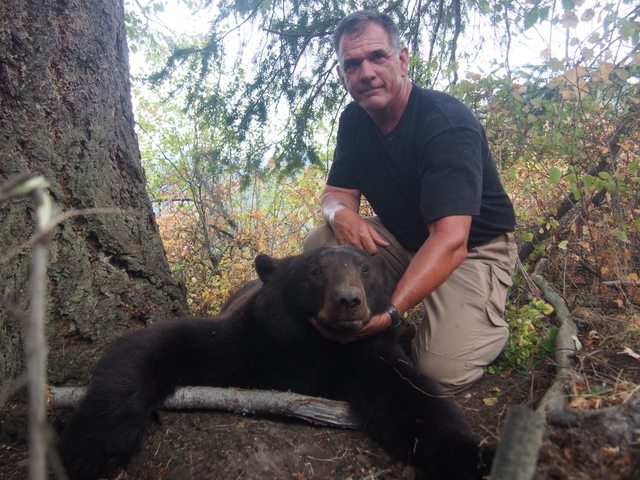 My son with a good sized bear, initially shot at 300+ yards, then followed into the brush and finished at short range: 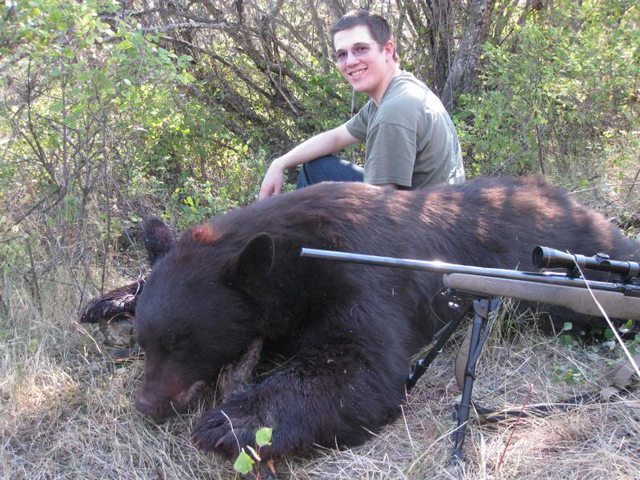 My 2010 bear, taken with the Ruger Number One. One shot at 306 yards according to the laser: 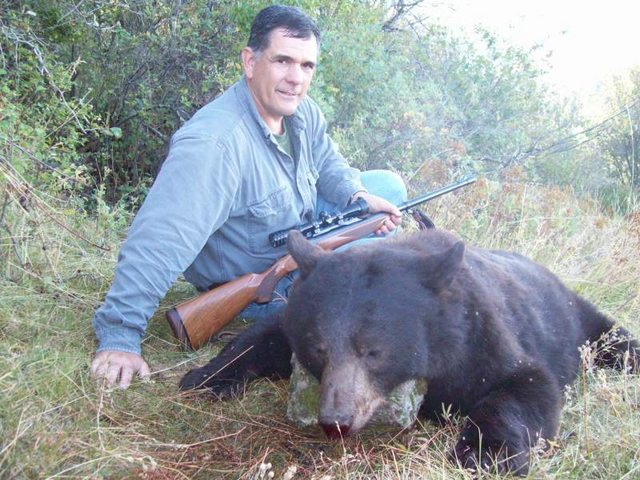 Calling bears... Sounding like an injured deer or elk. Can bring them to very close range. I've had bears come to within 20 yards of me when I've used a call. Maybe 15 yards. It was uncomfortably close. The bear, when called, changes from happy omnivore feeding on roots & berries, to a killer... Ready for meat! Very, very different behavior to deal with. I love it.

Over the last couple years I've become quite addicted to black bear hunting. All of ours in the east are indeed black. I'm planning a trip to the West now to try for a color phase bear. If you ever get a chance to hunt bear with hounds my advice is to do it!

I intend to hunt them with hounds!

What a rush Guy! I’ve always wanted to call one in. So far no luck, but I’ll keep trying. Guess I need to see one first just to know there’s one in range.
Thanks for sharing!
Africa on my mind.

I dream of going out to hunt one. Color isn't important when I get the first one, just checking off a dream! Maybe next year....

Couple of nice bears! Congrats to your both and thanks for sharing!
John 3:16

Congratulations! Black bear hunting is some of the most fun that can be had in the lower 48. I have been blessed to get a bear every year in the Adirondacks. Just like Washington state, it is illegal to bait or run with hounds so you gotta bring 'em in. We typically start early before the season opens using scents lures (beaver castor and anis extract) to lure them and hold them in the area. A tail camera is set up to hopefully get a picture of them. Then, when the hunting starts, just like you said, a wounded animal predator call brings them in close! I just use the rabbit and rodent in distress calls that I use for coyote. They work great in the thick timber of the Adirondacks, but you can't see the bear until they are on top of you. The last bear I got was at 17 yards with a .416! Nothing like it! I am glad I am not the only one that enjoys stalking and calling in these beautiful onyx bruins! Congratulations to you and your son!
"I am not a good shot, but I shoot often" - Theodore Roosevelt

A black bear hunt is on my bucket list!

Guy. Is a DIY hunt possible with a reasonable chance of success if you put in the planning, miles of hiking and effort? What about public access and ability to get a tag (are they draw or over the counter?). I have 3 black bear from PA but like to see new areas. Thx. Lee

Thanks for sharing. Black bear is definitely on our list when we get back to USA.

I hear that blueberry bear meat is some of the most delicious meat. Only one way to find out!

Lee M said:
Guy. Is a DIY hunt possible with a reasonable chance of success if you put in the planning, miles of hiking and effort? What about public access and ability to get a tag (are they draw or over the counter?). I have 3 black bear from PA but like to see new areas. Thx. Lee
Click to expand...

Non-resident bear tags are listed at $222.00 in the 2017 Washington state hunting regulations. It's an over-the-counter tag. There is a limited draw for spring bear tags, but for fall bear, it's just a simple purchase. In much of Washington, the season opens on August 1st, and the rest of the area opens September 1st.

Yes, I believe any decent hunter stands a fair chance at a bear in the northwest, if willing to put in the required time and work. Couple good spot and stalk techniques with the use of a predator call, and you should at least see bear. Success rates are generally low, because most of the bear tags are purchased by deer or elk hunters who just want a tag in hand, should they happen to see a bear while hunting. People I know who deliberately hunt for bear, are often successful.

The Northwest has a fair number of "color phase" bears in chocolate, cinnamon and blonde. An average mature boar here is around 300 pounds or so, and about 6' long.

BTW, re the NW geography, the area west of the Cascade mountains is noted for heavy rainfall and thick forests.

The area east of the Cascades tends to be more open terrain, and longer shots are more the norm.

Guy
You must log in or register to reply here.