USA: A Young Hunter Gets His First Animals

This past weekend was the Oklahoma youth rifle season. The state of Oklahoma has a three day season that allows youth to get into the field prior to any muzzleloader or rifle season.

My oldest son, Case, who is 9 years old now was dead set he wanted to kill a deer this year. Doing a little research into the youth season and checking my calendar, we made a plan to make it back to Oklahoma to hunt the first two days on our family place. In addition to hunting deer, the State allows youth to take a turkey with a rifle, if they have the appropriate fall turkey tag. The county we hunt allows the turkey to be either sex.

The opening morning found us sitting in a ground blind on a small wheat field that was a couple hundred yards long and a little over 100 yards wide. The field is surrounded by trees on the east and south, backs up to a creek on the west and on the north there is a rural blacktop road. On the west side of the creek is a large soybean field, which the deer cross the creek just behind the ground blind.

Just after daylight, we had a doe and fawn step out to the north of our blind. The doe hit our scent trail from the walk in that morning and flipped her lid taking both of them back into the timber. During this time, we could hear the turkeys talking and the thoughts they were coming closer.

Eventually, the turkeys finally made their way to the field. There were two turkeys with beards, so we were targeting one of those two. Case made a gave them a few warning shots and couldn't seem to connect. The turkeys made their way out of the field and about 20 mins came back. This time was great because it gave him a few minutes to compose himself. During that time, we discussed the mechanics again of making a good shot. When they came back into the field he was ready. He got lined up and made a great 107 yard shot connecting on one of the turkeys. When we made it over to the downed bird, I realized he had something special. He had taken one of the turkeys with a beard, which wasn't a gobbler, but a bearded hen. He was extremely excited getting a turkey and it being his first animal ever taken. 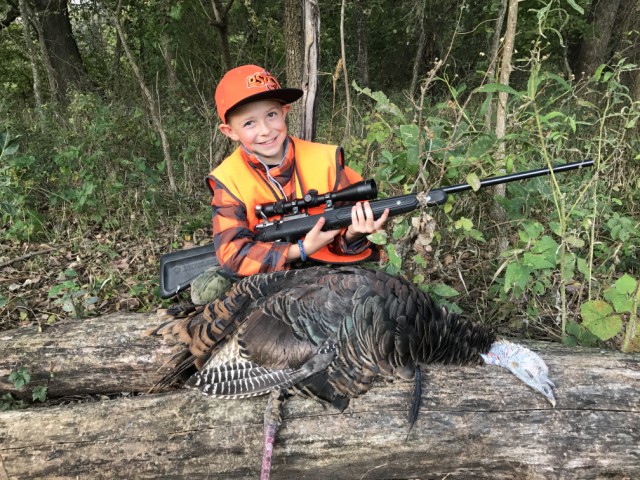 That evening we made it back to our blind, and watched the turkeys again for the vast majority of the evening. At sunset we had a very nice buck make it to the edge of the field to our right. I could see him from where I was sitting, but Case could not see him. The buck needed to step forward about 101-5 yards to give him a perfect broadside shot at about 40 yards. Unfortunately, a car came by about that time time and the buck turned around back into the timber and walked behind our blind about 10 yards headed to the soybeans across the creek. At last shooting light, two small fawns made their way to the field, but the failing light and the nerves got the better of Case again and put an end to our evening.

The following morning found us back in our blind. About 30 minutes after sunrise, a doe and fawn jumped into the field. Once again the doe came in from our north and caught our scent sending her bounding into the field. This time, she stopped on the opposite treeline. Case was able to get on her and dropped her in her tracks with a single shot from his 223 Rem. shooting CEB Raptors. The shot was 101 yards and she never knew what hit her. The shot was a bit high, but was a double lung passing completely through the deer. He was all smiles and super excited about his first deer. 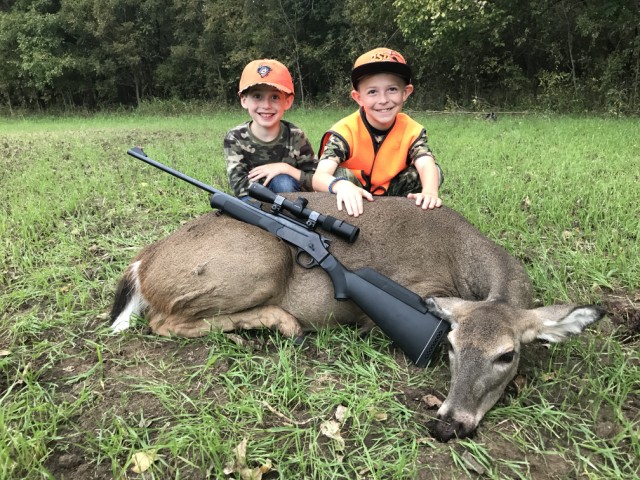 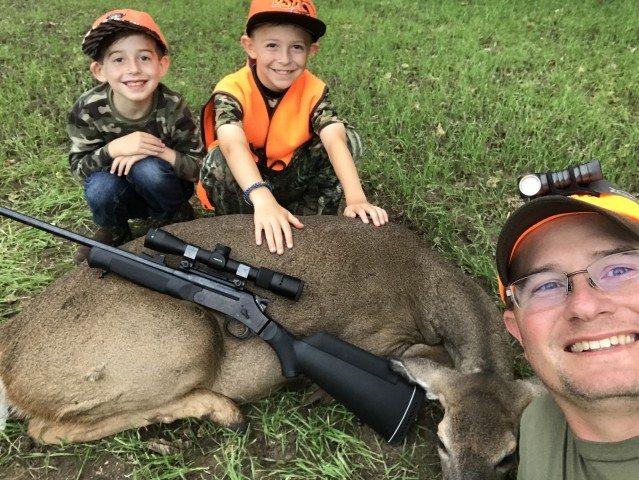 We never scored on a buck, which Case was a bit disappointed, but the weekend was extremely fun and successful. He'll be back in the blind during the regular rifle season in a few weeks trying to score his first buck. His younger brother, Cole, has already started asking about going with us to the range the next time we head that way, so he can start practicing for his chance to take his own deer in the future.

That is AWESOME!! Congratulations
Life is not a journey to the grave with the intention of arriving safely in a well preserved body, but rather to skid in broadside, thoroughly used up, totally worn out, and loudly proclaiming, “Wow what a ride!“

Way to go Chase! First of many happy hunting adventures I hope!

Good stuff! Congrats and thanks for sharing!
John 3:16

Congratulations. There is nothing like being there when your child is able to take their first animal. To witness all of the emotion that crosses their face as they first see the animal, realize that they will have a shot, make a successful shot and then approach the animal is really amazing.

whole lot of AWESOME in the OP...

Congrats and thanks for sharing!
JasonY

You'll never forget these hunts with your kids!

Great job taking your son out hunting. Congrats for helping him score.
Bruce
7

Most excellent! Look at those smiles and the memories last forever. When they are old and gray, they will remember this time as if it was yesterday.
"while it is ancient there are few better cartridges on Earth than the 7 x 57mm Mauser and its grandchild the 7mm-08 fits in the same performance realm." Ross Seyfried

Gee I can’t tell who’s the happiest! Wonderful bringing up young kids to appreciate the outdoors!
Africa on my mind.

Well done! That is a pretty good distance for the youngster to make a good shot

Awesome, congratulations to both of you, the smiles say it all. Forrest

Nothing like being there when your boy takes his first deer!