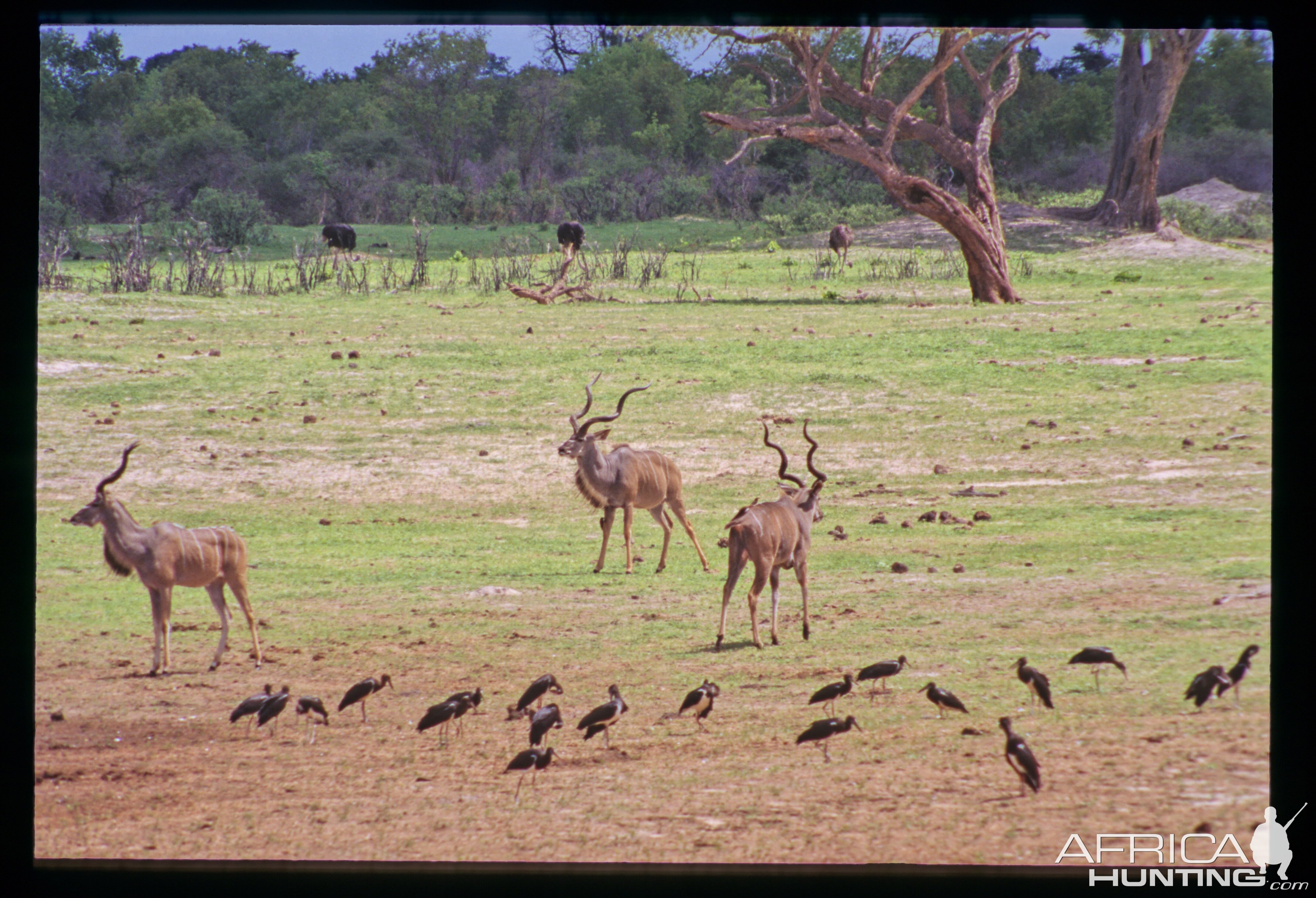 The benefits are far-reaching and cross-cutting, demonstrating the importance of the hunting industry to Southern Africa’s wildlife economy.

The benefits are far-reaching and cross-cutting, demonstrating the importance of the hunting industry to Southern Africa’s wildlife economy.

In rural Africa, hunting is known to bring wonderful mind-set-changing benefits that have transformed many beneficiaries from being poachers to champions of conservation.

In Victoria Falls, the highly skilled employees in the hunting sector are transforming themselves from being employees to becoming proud home-owners in areas such as the Commercial Bank of Zimbabwe middle-class suburb.

Some of these employees have since progressed to own safari hunting and other types of businesses that are needed in the Victoria Falls economy. They are also sending their children to elite universities, regionally and internationally. They also support their extended families.
Beautiful, bright-roofed and somewhat tastefully built houses that “announce” the curious blend of modernity and nature burst into sight as one arrives in Victoria Falls, driving from the airport.

Many people can be forgiven to think that these houses belong to bank managers and top government officials. They are wrong.

It is here, in the land where David Livingstone in 1885 had the rare experience as the first European man to see the Victoria Falls. In 2020, it is in Victoria Falls where we are beginning to also uniquely discover the second wonder of hunting benefits. That hunting was first known to benefit rural communities but secondly, it also brings never-told-before benefits to urban dwellers.

“Most of the people who stay in the Victoria Falls suburban houses are directly employed by safari hunting companies and some are employed by companies that directly benefit from the hunting business value-chain, including restaurants such as the Boma that is a very popular game-meat-eating outlet,” said a Victoria Falls-based executive director for Mosi Advocates on Social, Environmental and Conservation Trust, Evans Irvine Makoni.

“Some of the bank managers and top government officials can hardly afford the houses whose stands were sold for US$22 000, but employees of hunting companies who, include professional hunters, trackers, guides, drivers and chefs, can."

A local businessman, Thomas Mutano who owns an upmarket lodge, said that the Boma specialises in game meat and tourists go there to eat meat, paying US$40 to eat hunted game meat from wildlife ranches.

“All types of hunted meat are eaten in the hotels and restaurants in Victoria Falls, especially the Boma that takes up to 100 people per day,” said Mutano. “Take away the hunted game meat and then you have negatively impacted on the hotel and restaurant businesses in Victoria Falls – total collapse of the economy. Most tourists come here to experience eating game meat, including crocodile meat. So the hunting industry that’s involved in the supply of game meat is a key player in the Victoria Falls wildlife economy.”

A local bank, the Commercial Bank of Zimbabwe (CBZ), bought and developed land where the safari hunting employees have and continue to build their dreams homes.

“There are over a 1000 housing units in the area,” said the CBZ Victoria Falls branch manager, Fungai Dhliwayo in a telephone interview.

Well-placed sources in the banking sector who spoke on condition of anonymity for professional reasons, said that 10 percent (100 houses) in the upper middle class area are owned by safari hunting employees, with about 50% (500) belonging to workers directly benefiting from the safari hunting businesses.

Stunning and incredible revelations that show the important benefits those hunting industry employees are getting.

“Even the education sector is directly benefiting from the safari hunting employees,” said a local private school owner, Tendai Gift Kowo, founder and director of Elite Independent College. “The parents of most of the children who learn at my school work for tourism businesses that are directly linked to safari hunting industry. “Therefore, I fear that if the hunting markets were to close as some Western governments and animal rights group continue to threaten, it would also result in the closure of my education business. Not to mention the potential loss of good education opportunity for the learners and job losses for teachers. Ban hunting you have killed the livelihoods of Africa, Zimbabwe and people in Victoria Falls.”

Kowo said that 95% in Victoria Falls depends on the wildlife economy and hunting is the main driver.

The beneficiaries of the hunting industry include the skilled employees for hunting companies, ranging from top chefs, cooks, professional hunters, marketing managers and accountants. They are using the salaries paid to them by hunting companies and tips paid by the safari hunters, to build beautiful homes for themselves.

The first known wonder is that the hunting income is meaningfully supporting the conservation and developing initiatives in rural Southern Africa and reducing poverty in the process.

According to Ishmael Chaukura of the Masoka CAMPFIRE community of Zimbabwe, the rural schools built using hunting revenue have and continue to produce “teachers, doctors and top accountants who are proudly providing professional services needed in their country.”

These are some of the new, refreshing untold benefits from the hunting industry that should silence those who oppose hunting. The link between hunting benefits and socioeconomic benefits has been laid bare.

The second and untold wonder includes the wonders of hunting benefits in the Victoria Falls urban areas. Go there. Discover another mutually uplifting wonderful relationship between man and nature, powered by the hunting industry in ways that the world had never known, until the publication of these findings.

The story of highly skilled hunting employees owning houses in urban areas was traced across the border in Zambia’s Kazungula Town where Roy Seemani, acting ranger of Zambia Department of National Parks Mulombedzi game management area acting ranger, confirmed that hunting employees own decent houses in Kazungula and others have dream homes in Livingstone and in the capital Lusaka in suburbs such as Mumbwa.

In Namibia the hunting company employees are said to be more interested in investing in rural economies, building tuckshops, buying cattle that are considered a status symbol in most African communities. They own modestly built houses in both urban and rural Namibia and Botswana.

“In Namibia, I have seen people who were previously unemployed and almost owned nothing – later invest in livestock production buying up to 10 cows each; after getting employed in the safari hunting industry,” said Salambala Conservancy chairman, Daniel Mwinga.

“They also use their salaries to send their children to good schools which is a good investment in education for our future leaders.”

This observation was supported by Hentie van Heerden of the Nambian Professional Hunters Association who said that in Namibia, the hunting companies’s employees were more interested in investing in their rural areas than urban areas.

“I do not see or experience the same situation (s) you mention in Namibia at all. Safari hunting staff can never earn so much money to build elaborate houses or even a regular house in his village. At least 10% of our staff have little shops at home in the local villages where they live. Products that they sell include beer, cool drinks, cigarettes, maize meal, sugar, cooking oil and few other basic items,” said van Heerden of PHASA.

“Most of the people think that hunting benefits only rural communities,” said Seemani of Zambia Department of National Parks and Wildlife. “This is not true. Twenty percent of hunting companies are highly skilled people such as chefs, waiters, cooks, accountants, marketing officers, professional hunters, from urban areas who have professional skills demanded by skills that clients from overseas.”

Seemani said that if hunting were to be banned by shutting down hunting markets, it would collapse African countries economies and also worsen rural poverty through collapsing community development projects.

The wildlife-rich Kavango-Zambezi Transfrontier Conservation Area is popularly known as the four corners where Botswana, Namibia, Zambia and Zimbabwe share borders and collectively boast of having the biggest elephant population in the universe.

“Britain and Western animal rights groups claim to be progressive, yet in reality they are suppressing an industry that promotes conservation and development in Africa – hunting,” said a local safari hunting business owner, Kumbirai Kurerwa.

“How dare they tell us to stop hunting while they also do so in their countries. Besides, it’s our sovereign rights to use what we own – wildlife to benefit conservation and development in both urban and rural areas.”

The Botswana-based Ngamiland Council of NGOs chairman, Siyoka Simasiku, said that rural communities are also using money from the wildlife economy to build houses for the destitutes, provide, funeral assistance and scholarships.

“For example, the community-based organisations paid for the construction of seven houses for the poor at Sankoyo,” said Simasiku. “At Khwai 18 houses were built, while at Mababe 10 houses were built for the elderly and the poor. The wildlife economy has therefore transformed some rural communities from living in poverty and relying on hand-outs from the donor agencies from Europe and North-America into productive communities that are moving towards achieving sustainable livelihoods.”

As threats to shut down hunting markets continue to manifest, particularly from British Prime Minister Boris Johnson, the African wildlife economy stakeholders remain worried about their future wellbeing and that of their wildlife which can never survive without benefit the people.

Fortunately, not all Western people are opposed to wildlife hunting. The American hunters are one of the biggest supporters of hunting in Africa with thousands visiting the continent to hunt all types of game annually, during the April to September hunting season. The hunting fees that they, together with other hunters from all over the world, including Europe, pay, help to incentivise wildlife and wilderness conservation and also to promote rural and urban development.

The crosscutting benefits of the hunting industry literally touch almost all sectors. They can be felt from the moment a sport hunter jumps on a plane from New York or anywhere and arrives in Africa, shuttled to a local hotel where he/she stays wines and dines, samples his first cold drink or beer, enjoys a meal, makes a transaction at a bureau de change, buys jewelry and clothes, sends his trophy to the taxidermist, gets its shipped to his home place via companies such as DHL.

It’s the whole value chain that is overlooked. Let alone the industry’s support to the banking sector through banking money and keeping them in business.

Good article and thanks for sharing with the AH community.
You must log in or register to reply here.