I don't normally add any words to the pictures I share on here but I felt this one more than warranted one of two..

First off, a massive thank you to a good friend of mine who very kindly invited me to join him for a couple of outings stalking Red stags. I have been going out with him the last 3/4 years and although I have seen Reds every time, including some up close encounters, I had not managed to shoot one.

As some of you will have seen I managed to shoot my first red deer ever the other day with the very same friend. He was a young cull animal and I was over the moon to have gotten my first. The head will be boiled out and put on the wall. 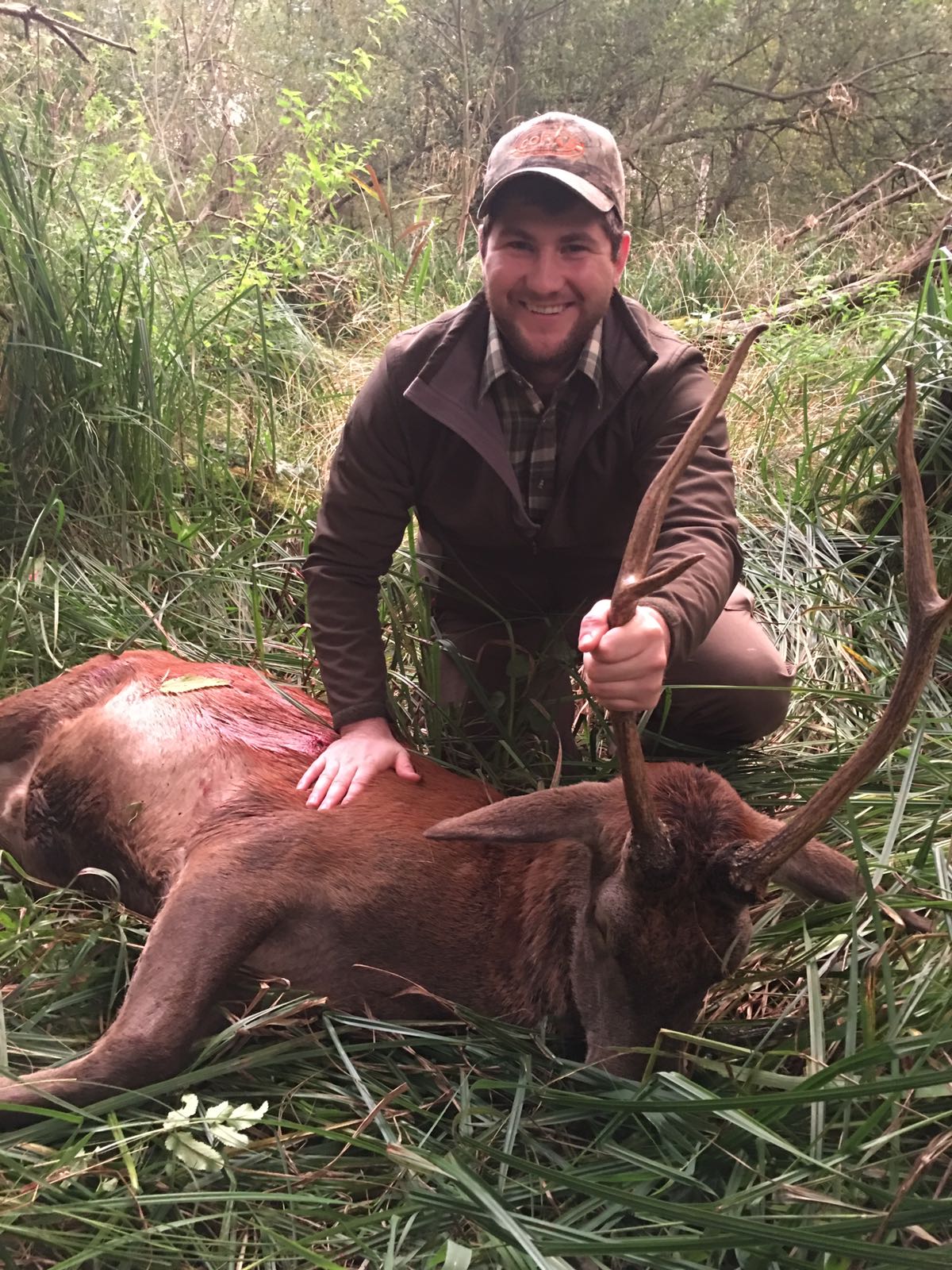 A week and a half later I am invited back to try for a stag during the rut. Tuesday evening saw me driving over in great anticipation of what the evening may hold.

We arrived at the ground and headed for a great spot which was a small mound with a block of scrubland in front, another 500m away and grassy marsh land in between. We settled in and after about 20 minutes the stags started to roar. Some where a good half a mile away, some where in the scrub in front of us. There was one stag in particular that was non-stop constant roaring. He seemed to walk from one end of the scrub to the other roaring at other stags to let them know this area was his. Whenever he reached one end and roared all the stags at that end fell silent and only started to roar again once he had moved to the other end of the scrub.

This went on till nightfall and although he was only 40m away, he never left the scrub. My friend would raw back at him and he would soon reply with what he thought of us, sometimes from just a few meters inside the scrub line but never venturing out. This dance went on until it was too dark to shoot and we called it quits and headed back. As we left the roars continued into the night.

It was an amazing experience to be out and hearing 5-6 different stags roaring away. Even though no stags were seen, I had an evening I will remember for a long time to come.

We decided to return to the same spot in the morning but first it was time for a curry, some beers and a whisky before bed.

The next morning we were up at 5:15 and headed out to be in place an hour before sunrise (legal shooting time). We settled into the same spot and glassed through the darkness for movement. Stags could be heard roaring at the other end of the heath, but all was dead silent where we were. It was amazing that it could be so full of life and then the next morning you could hear a pin drop. We sat glassing and listening for an hour and a half with no signs of life.

Suddenly from the scrub land behind us some red hinds start to cross the marsh and head towards us followed by a stag. I could not see them as I was sat round to the right, so my friend told me to slip down to the flat ground and get on the sticks. I could now make them out heading in our direction, the stag persuing the hinds right towards us.

It didn't look like they were going to stop so my friend let out a roar to stop the stag. He stopped broadside at 100m and I placed the cross hairs on his shoulder and squeezed the trigger. He fell to the shot and my friend said congratulations, you have just shot a massive stag. I had no idea how good he was, I had not looked at his antlers other than to quickly note which animal was my target - I was just focused on making the shot.

We approached him and he tried to get up. Another shot to the shoulder was required - it is amazing how tough these animals can be, especially when they are pumped full of adrenaline during the rut.

We now went up to him and I got my first look at him. I was genuinely lost for words as my friend shaked my hand along with some back slapping. I could not believe it, he was a stunning animal. I can honestly say that I would have been happy with any animal, the whole experience had been awesome, to end up with the trophy of a lifetime left me lost for words. We took some photos and then headed back to get the truck. 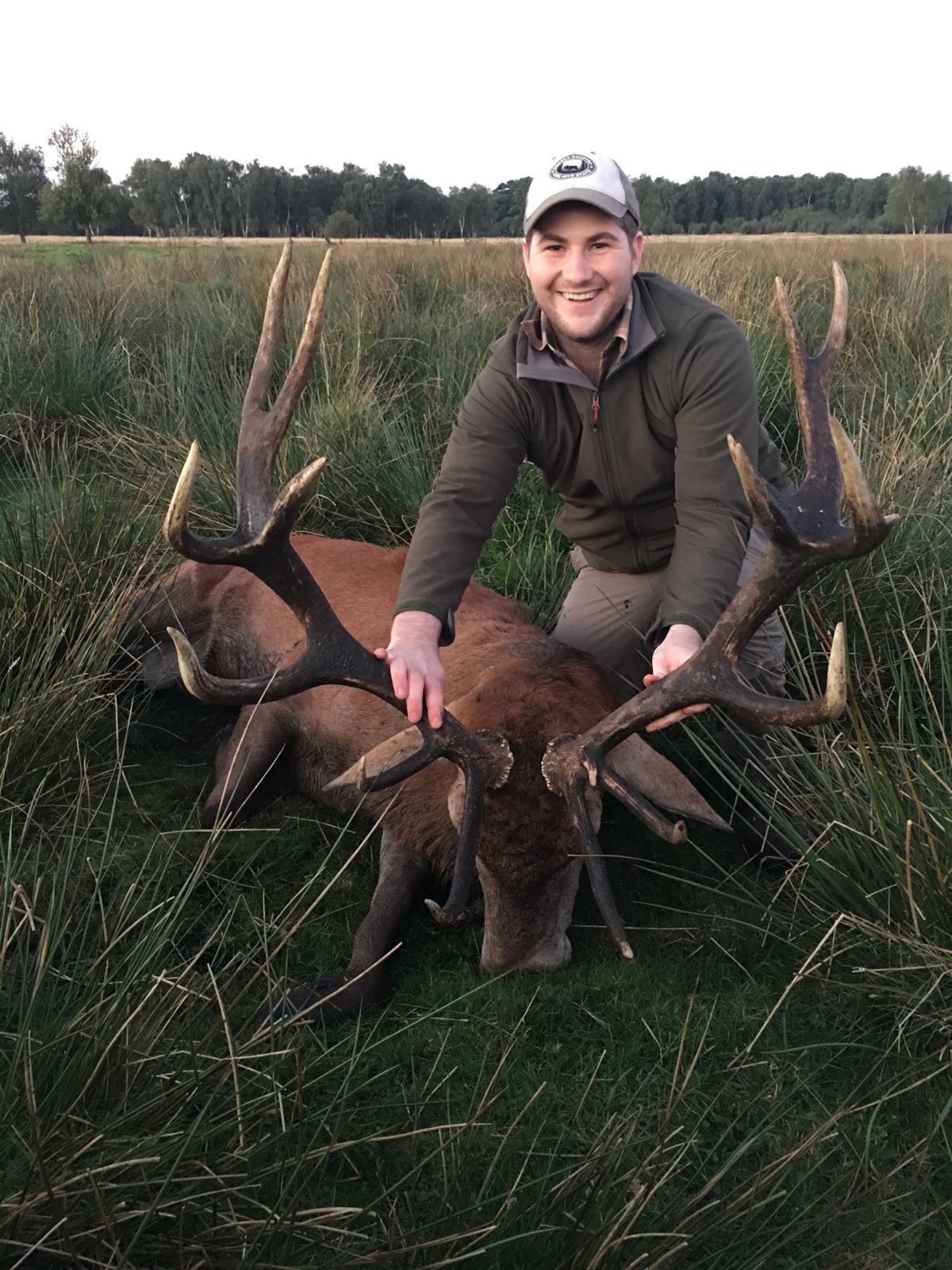 We got back, grollached him and then winched into the back of the truck. Body weight wise he was not a monster, but came in at a very respectable 140.5 Kg.

I cannot thank my friend enough for his generosity. I have a memory I will cherish the rest of my life. The whole event has been on replay in my head ever since. What makes it more special was to be able to share it all with him, and we will no doubt talk about this every time we see each other. His head is now skinned and ready for boiling out. 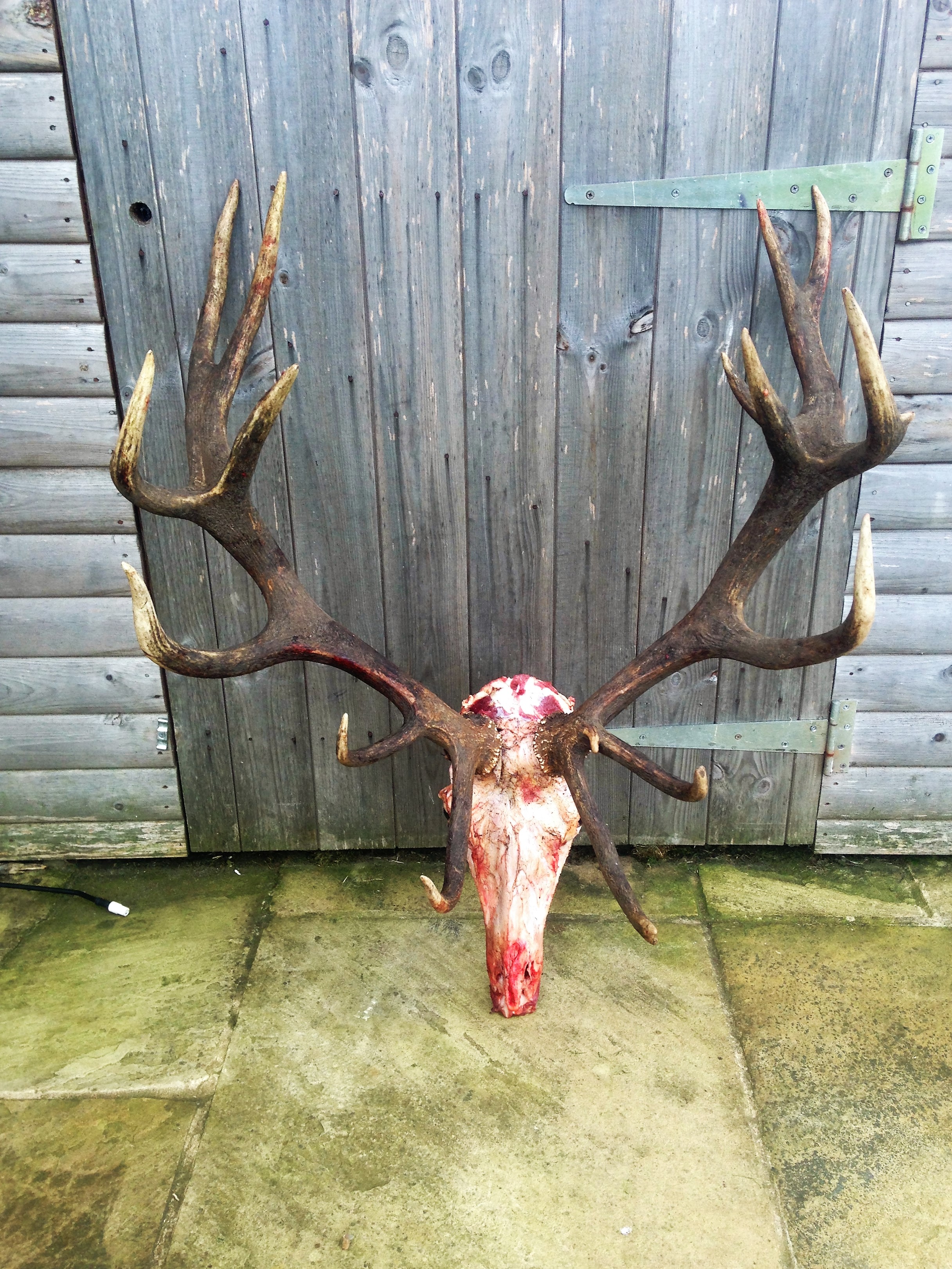 Very nice! Congrats and thank you for sharing
John 3:16

Beautiful stag! I think that is one of the prettiest racks I've seen!
"I don't need to shoot farther...I need to hunt closer." - G. Sitton

That is a stag of a lifetime. What an incredible trophy and the hunt to go along with it.

BRICKBURN said:
That is a stag of a lifetime. What an incredible trophy and the hunt to go along with it.

He is fully cleaned off now and weighs in at 8.5KG. He needs 90 days to dry and then will be sent of for measuring by the CIC.

You're wearing a grin that matches your trophy. Congratulations and thank you for sharing your story.
Clayton
There's just something about Walnut and Old Iron.

Persistence does pay off. Well done. That is indeed a fine stag. Congrats Bruce

UKHunter said:
He is fully cleaned off now and weighs in at 8.5KG. He needs 90 days to dry and then will be sent of for measuring by the CIC.
Click to expand...

Good thing you did not have to pay by the gram

Well done Tom the second one looks like a stonker!!
PS dont forget to go to my just giving page mate https://www.justgiving.com/fundraising/Manish-Ghelabhai
The Empire was built on cups of tea. When in doubt, fear, joy or any other human emotion tea is to be drunk.

Waidmannsheil again UK.
I don't belive that you will shoot an better stag in England in your life.
But you are a young hunter ,wait and see
Do you know the average size in this area for the good ones ?
best Regards
Foxi
(the other thing I bring it on Friday on the way)

Foxi said:
Waidmannsheil again UK.
I don't belive that you will shoot an better stag in England in your life.
But you are a young hunter ,wait and see
Do you know the average size in this area for the good ones ?
best Regards
Foxi
(the other thing I bring it on Friday on the way)
Click to expand...

I don't believe I will either, but that is OK. I am thankful for what I have and what most dream of.

Where I am we have the biggest stags in the UK. Breckland reds from the Thetford area are the last true blood line of pure English reds. If you look at the medals coming from England for reds each year 80% probably come from my area.

On a well managed estate stags like mine and bigger are taken every year. 8-10Kg heads are there but you pay the price to shoot quality animals. Body wise the mature stags range from 140-190 Kg.

A very nice trophy UKhunter! Thank you for posting!

Congrats on your stag and thanks for sharing it with us. Nothing like hunting them in the Rut.
Enjoy Life Now! It has an Expiration Date.
You must log in or register to reply here.

D
drbeech1968
I did a little housekeeping in my shop and found some .500 Jeffery ammo that I no longer need. Superior Ammunition and Hendershots loaded them, along with AHR (American Hunting Rifles). Several Woodleigh/A-Square solids along with lead bullets in both 535g and 600g. Message me for any details.
19 minutes ago •••
P
pam308 TOBY458 pam308 wrote on TOBY458's profile.
Just saw your listing for a winchester 70 458. Is it still for sale? I want it!!! pam308
Friday at 7:15 PM •••