Well folks I'm going to attempt a quick hunting report on what a great time we had in England.

To start out I'm going to let you know that this trip was in fact planned for my Wife Deb's Birthday, she had always wanted to go to England and I surprised her and bought tickets for her birthday. Well at the same time on Bespoke Global Hunting with Alex Hinkins had posted a raffle for a Muntjac hunt and I had always dreamed of hunting a Muntjac so what the heck I put in for a ticket get a chance at 2 birds with one stone.
Well as the Raffle went on I kept looking at the numbers and decided I needed to put in for a few more to better my chances. Then when Deb figured out what I was up to and I had put in for 6 numbers she wanted to know why I hadn't gotten her any numbers it just so happened that there was 6 numbers left and you guys know if you want to keep the piece you have to keep the war department happy so I put in for the Numbers for deb putting and end to the numbers. Well Alex had lost a good friend so it was a few days later before the raffle could be drawn but the day came and Alex's Daughters did the Drawing and when they drew the number and called it out I think Harry Potter must have been in the room because I was floating 3 feet above the chair, it was my Number 19.

Alex quickly made contact and kept good communications as we planned our trip to the UK. Well between the drawing and the trip I had added a CWD to the list as well, we got to London and did a few tours through
London 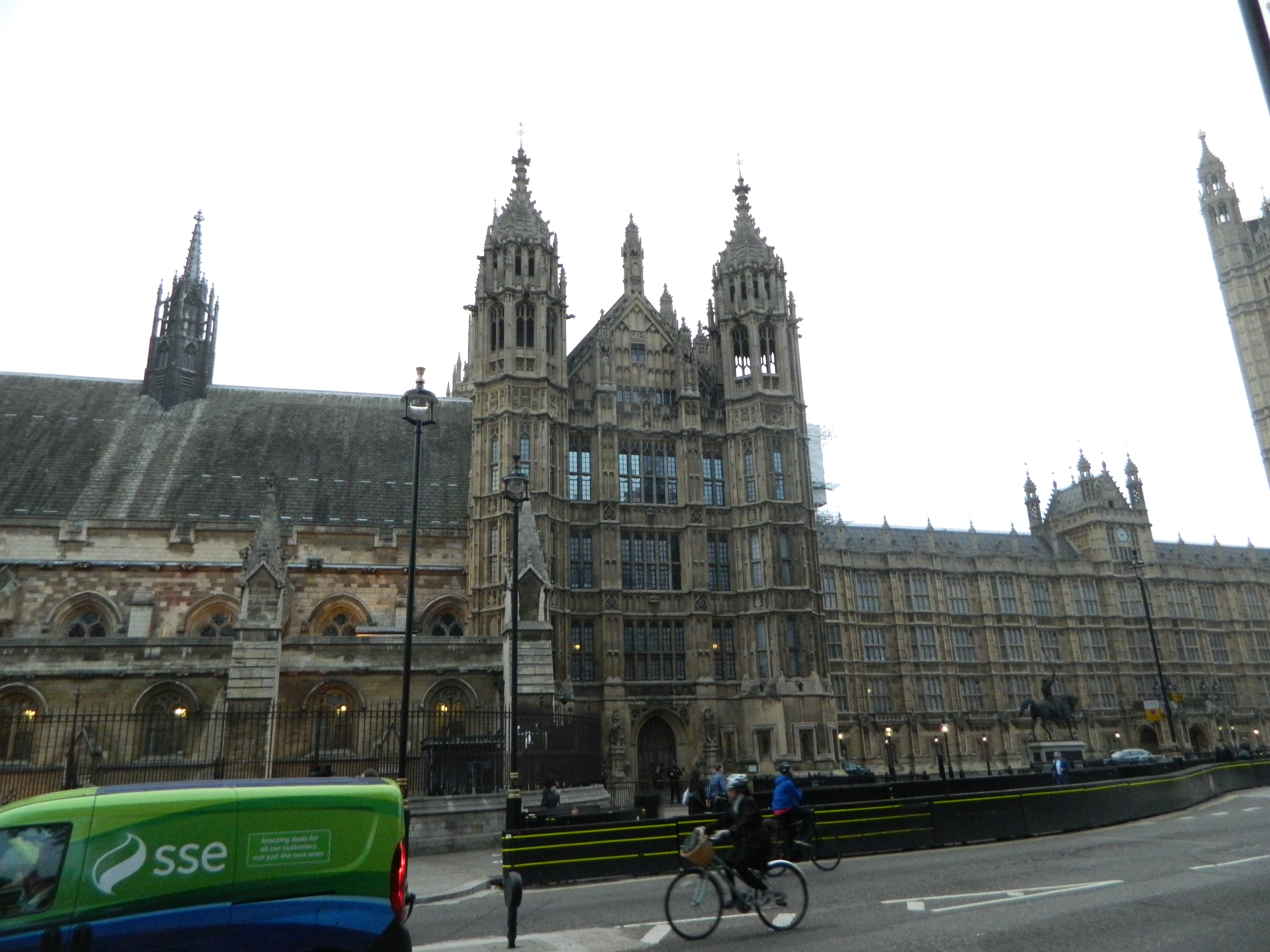 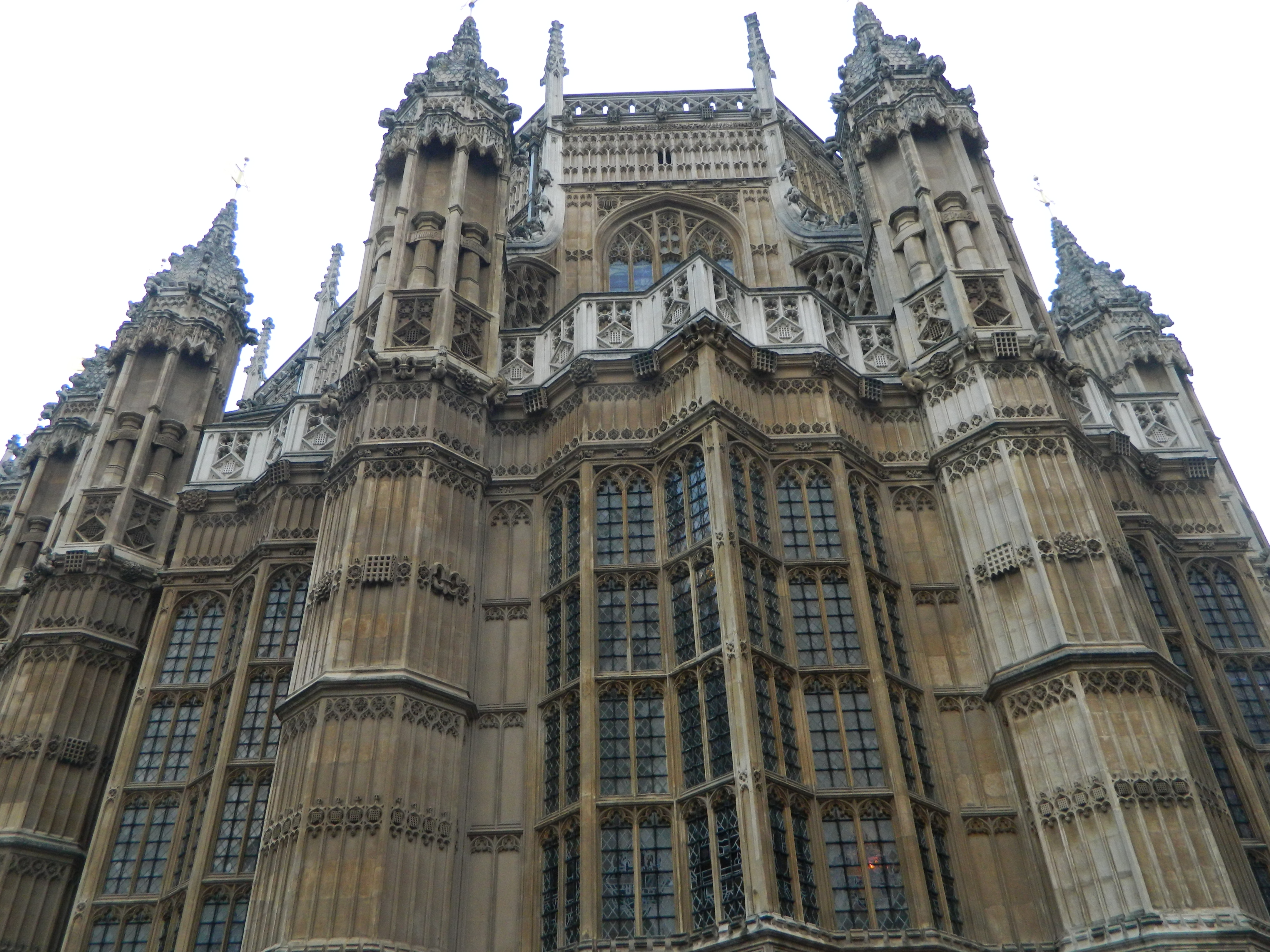 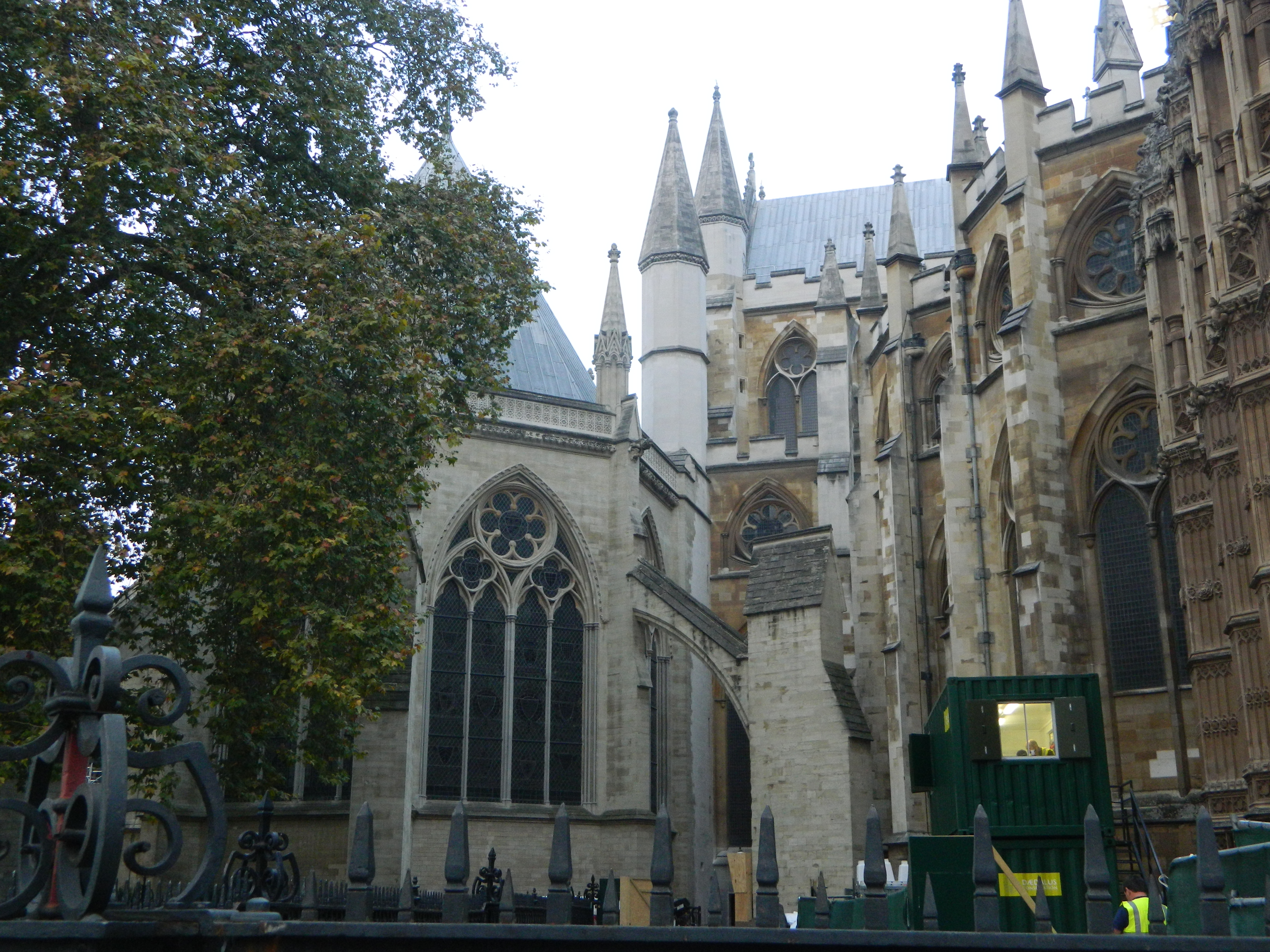 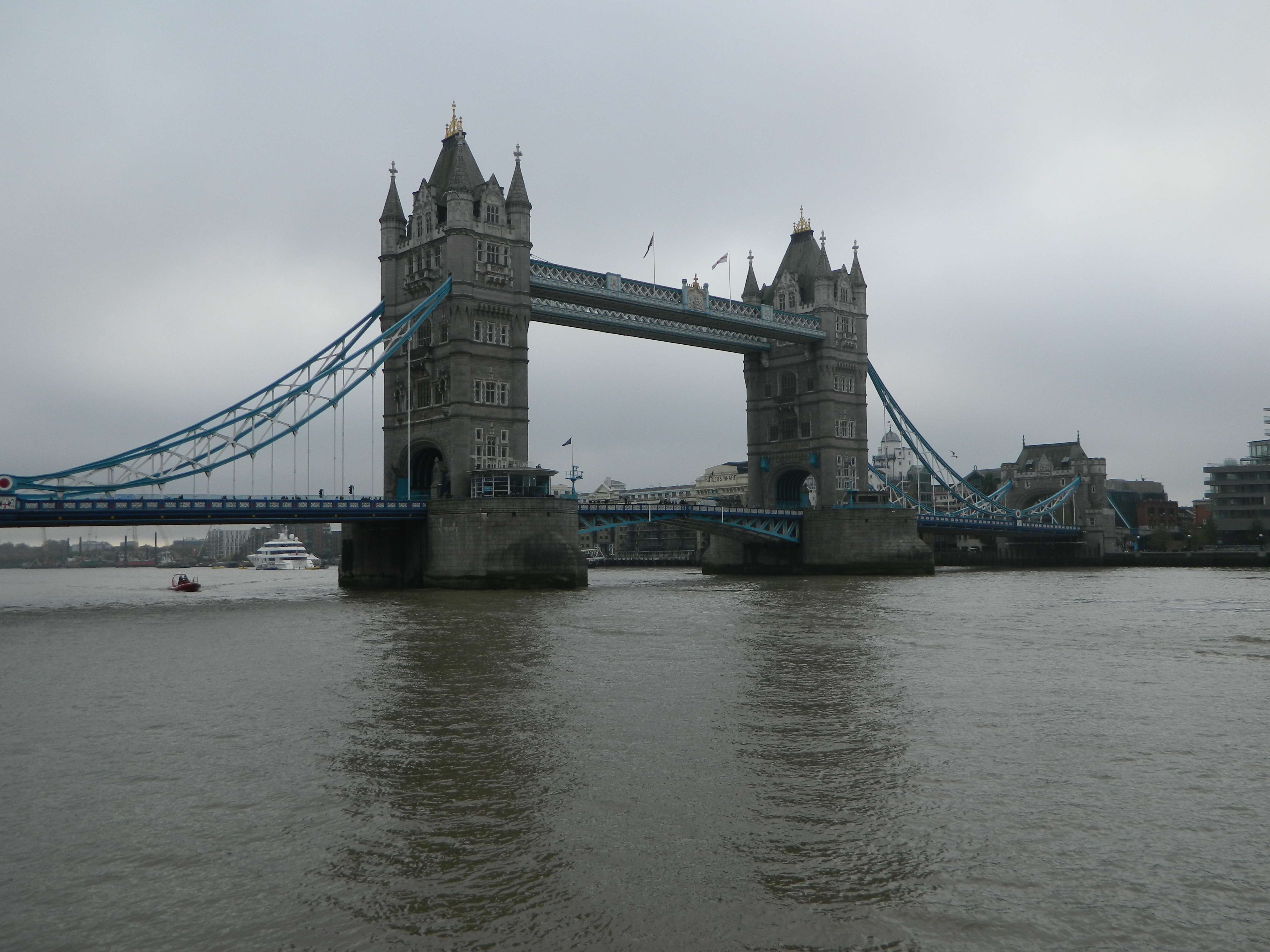 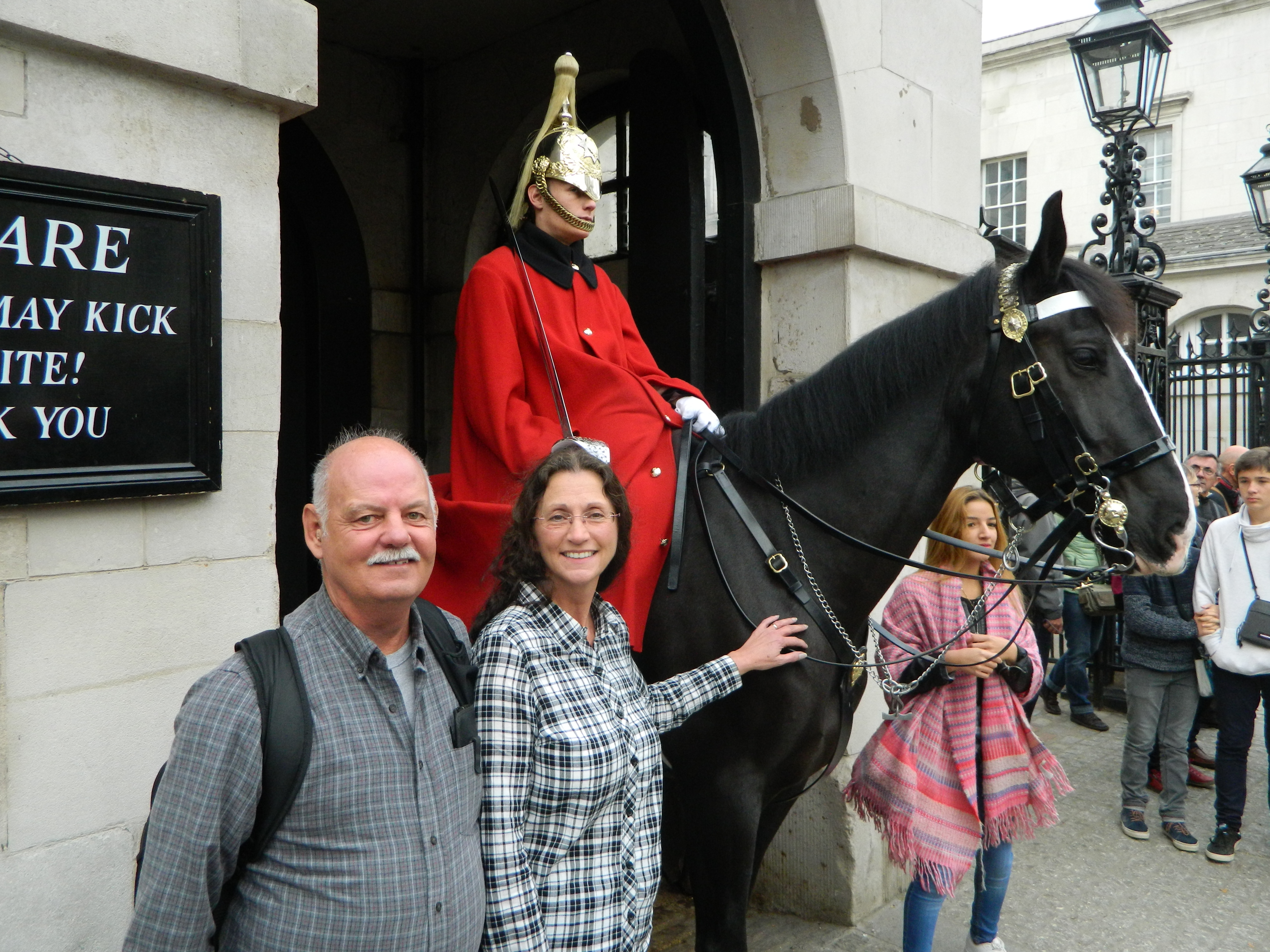 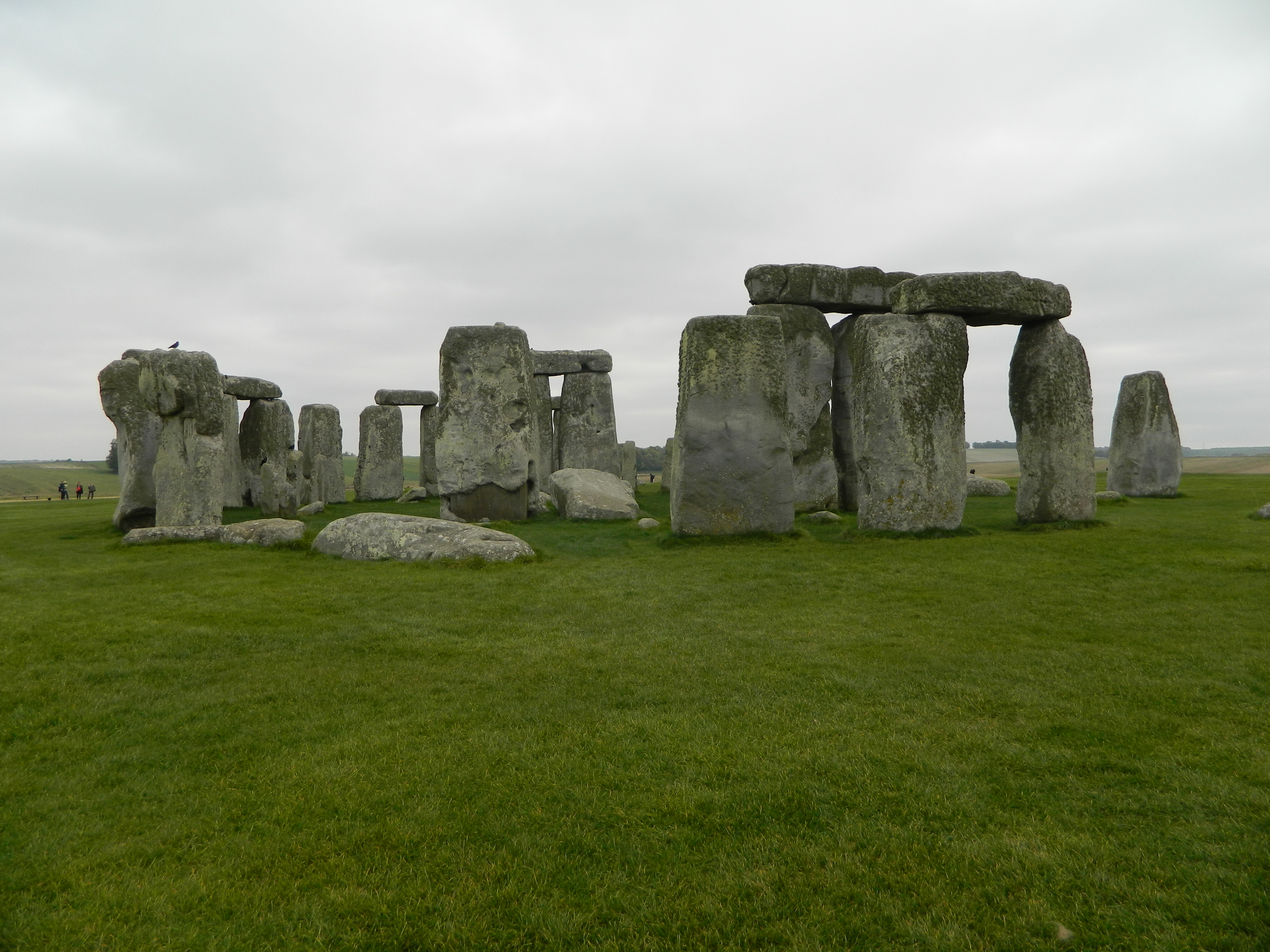 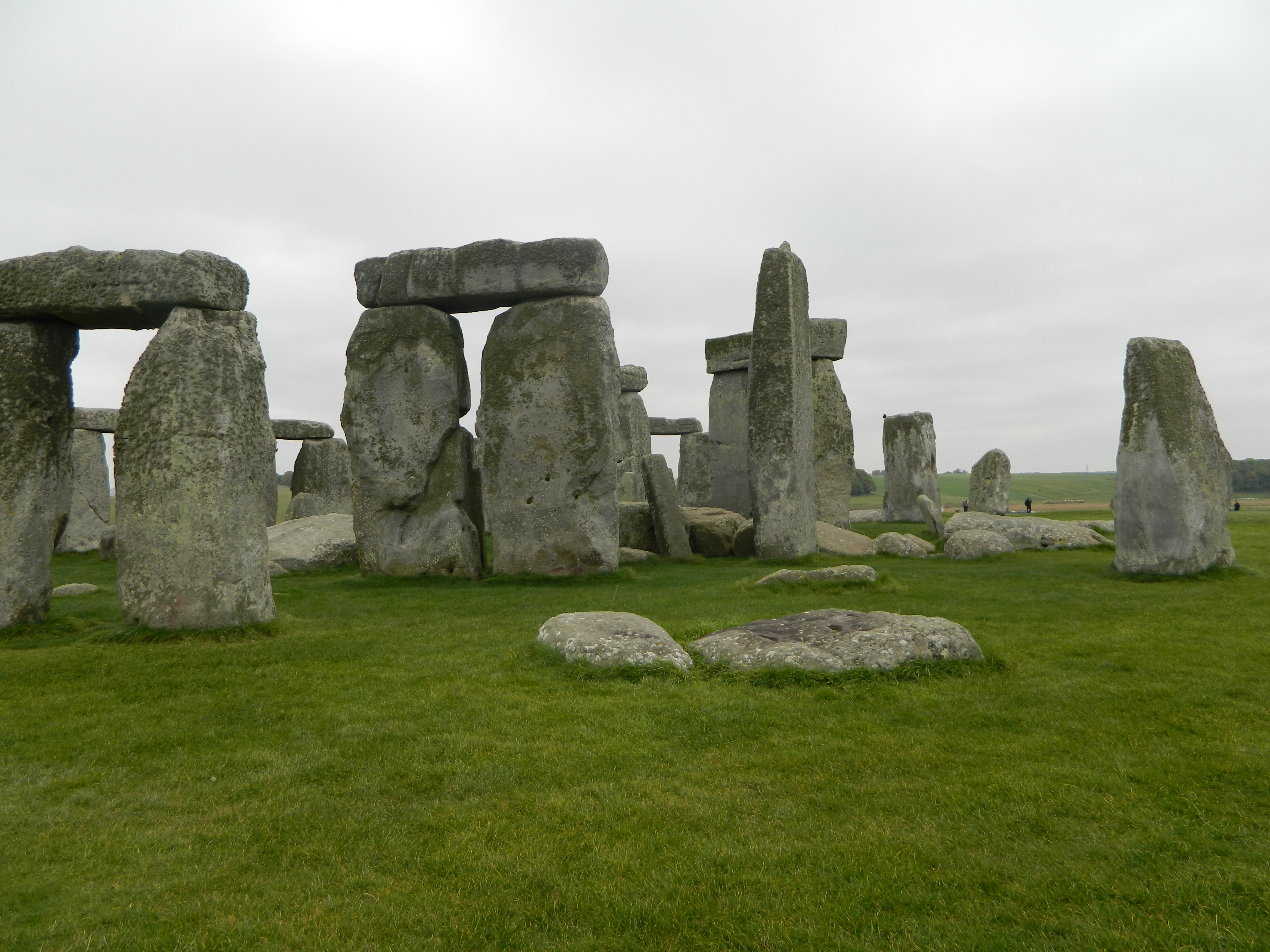 and the burial mounds around Stone Henge. 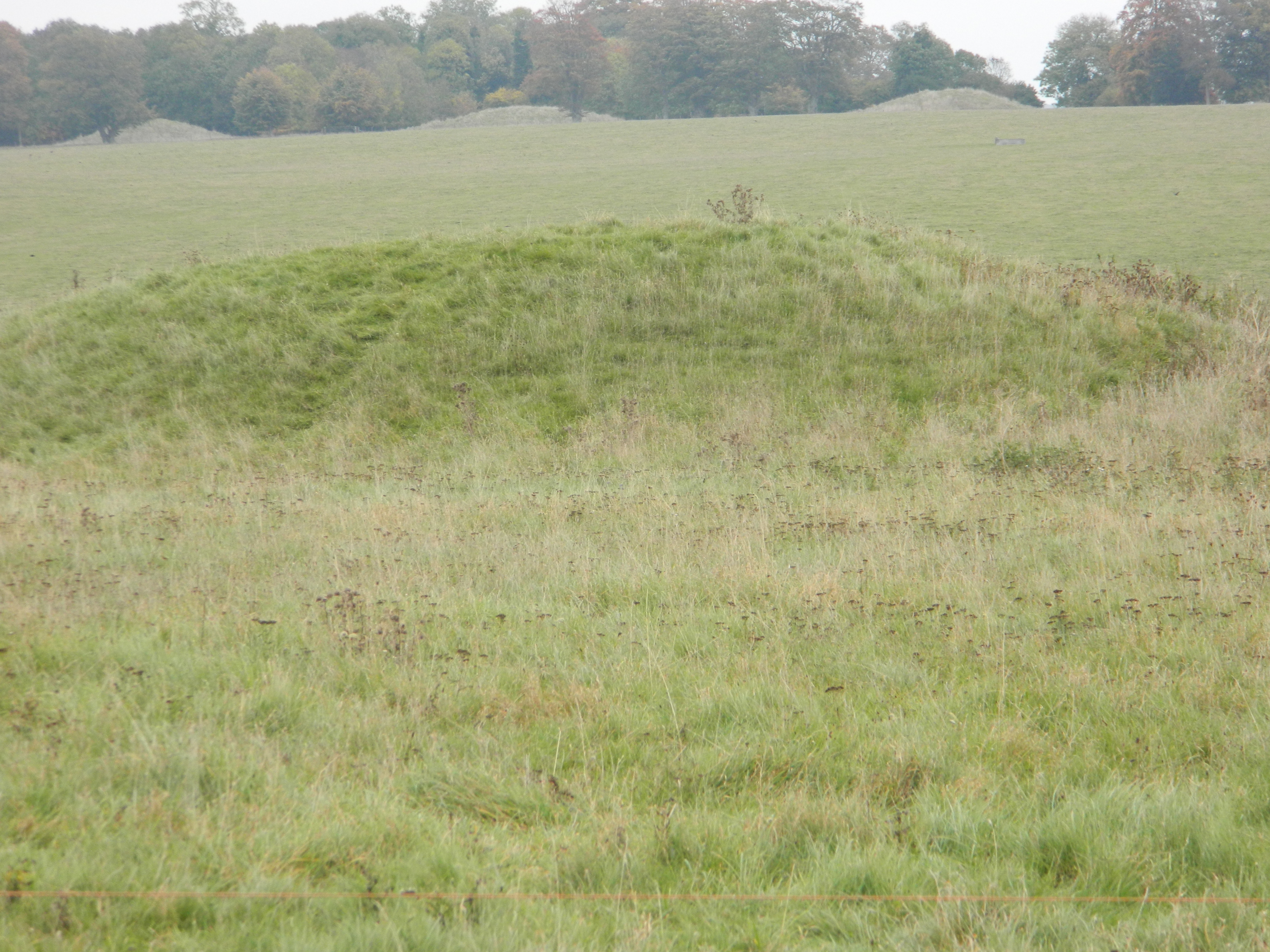 then ot was off to the village of LaCock that is a 14th century Village where some of the Harry Potter Scene's are filmed. 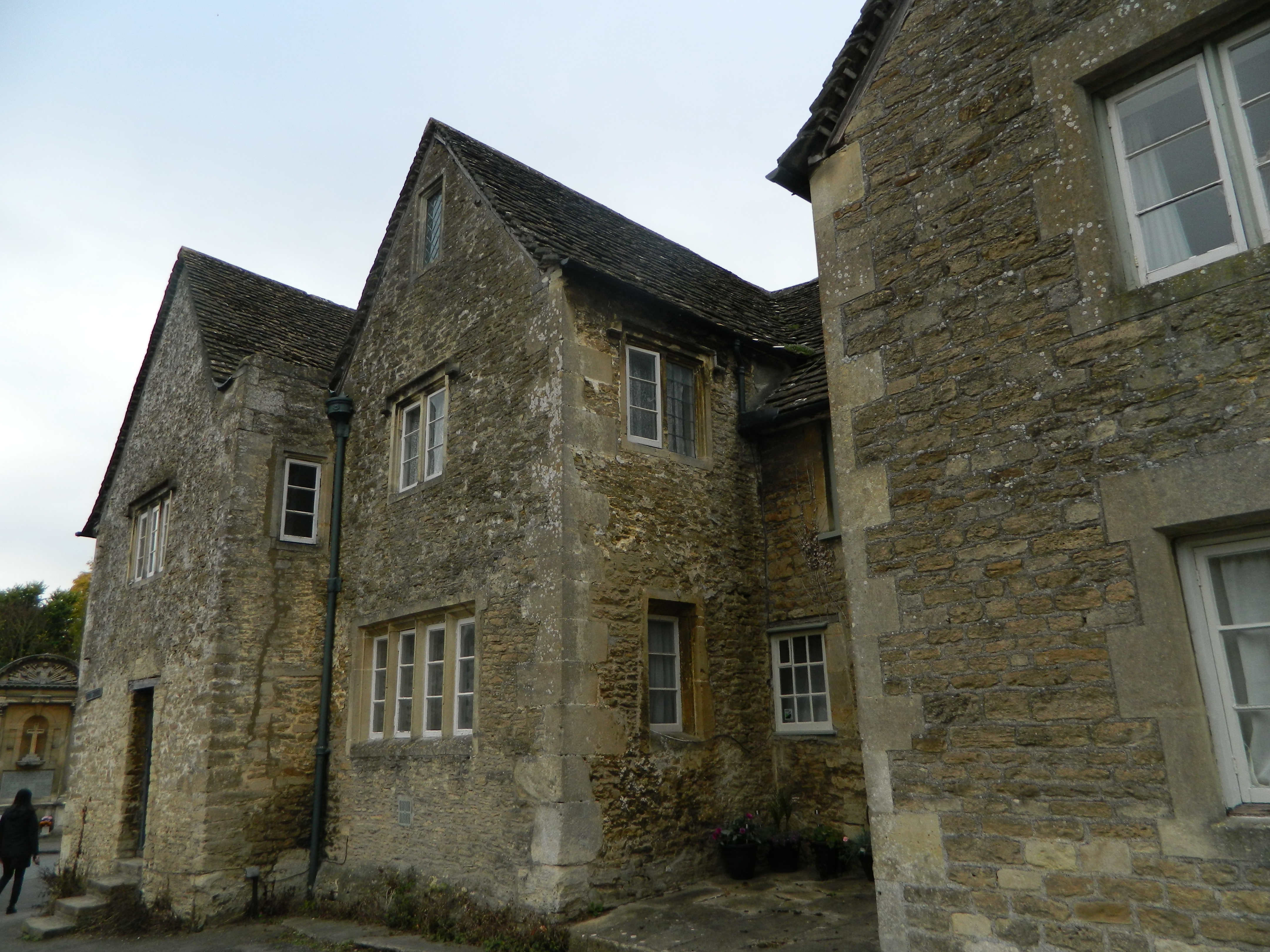 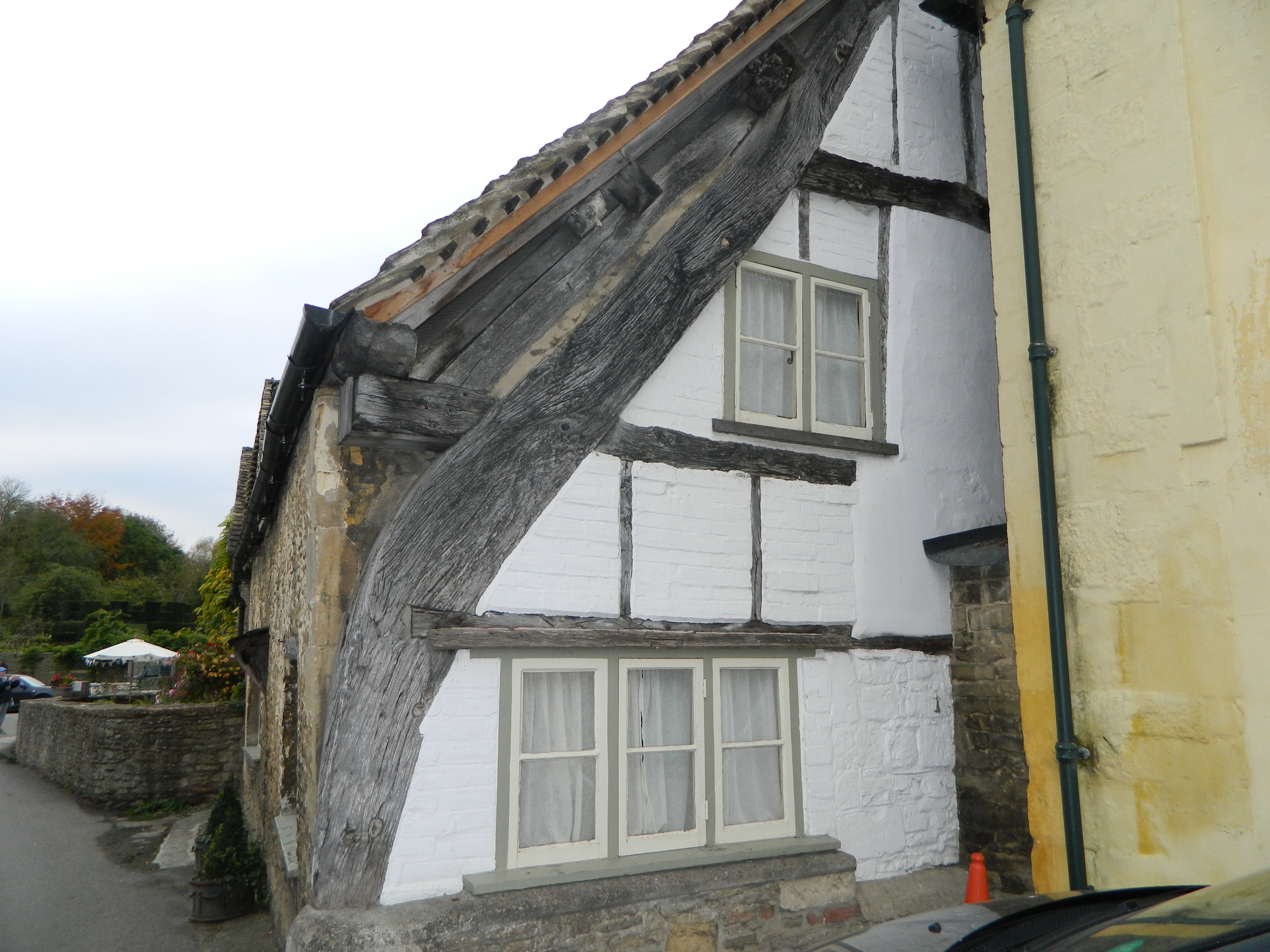 This is a 14th century jail cell yep you sleep on the right and crap on the left while being chained to the wall. 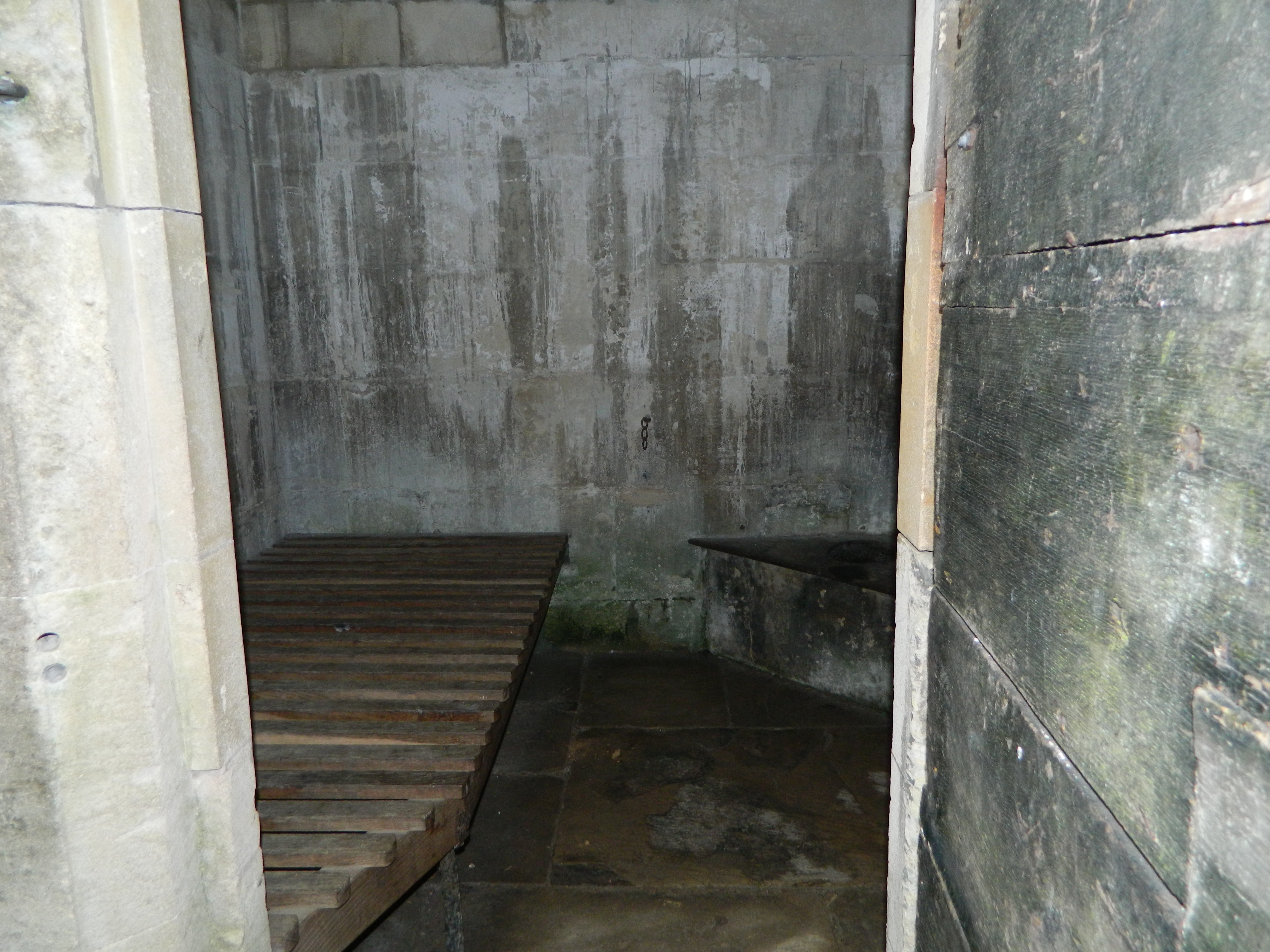 I just loved the way they built Barns to last back then. 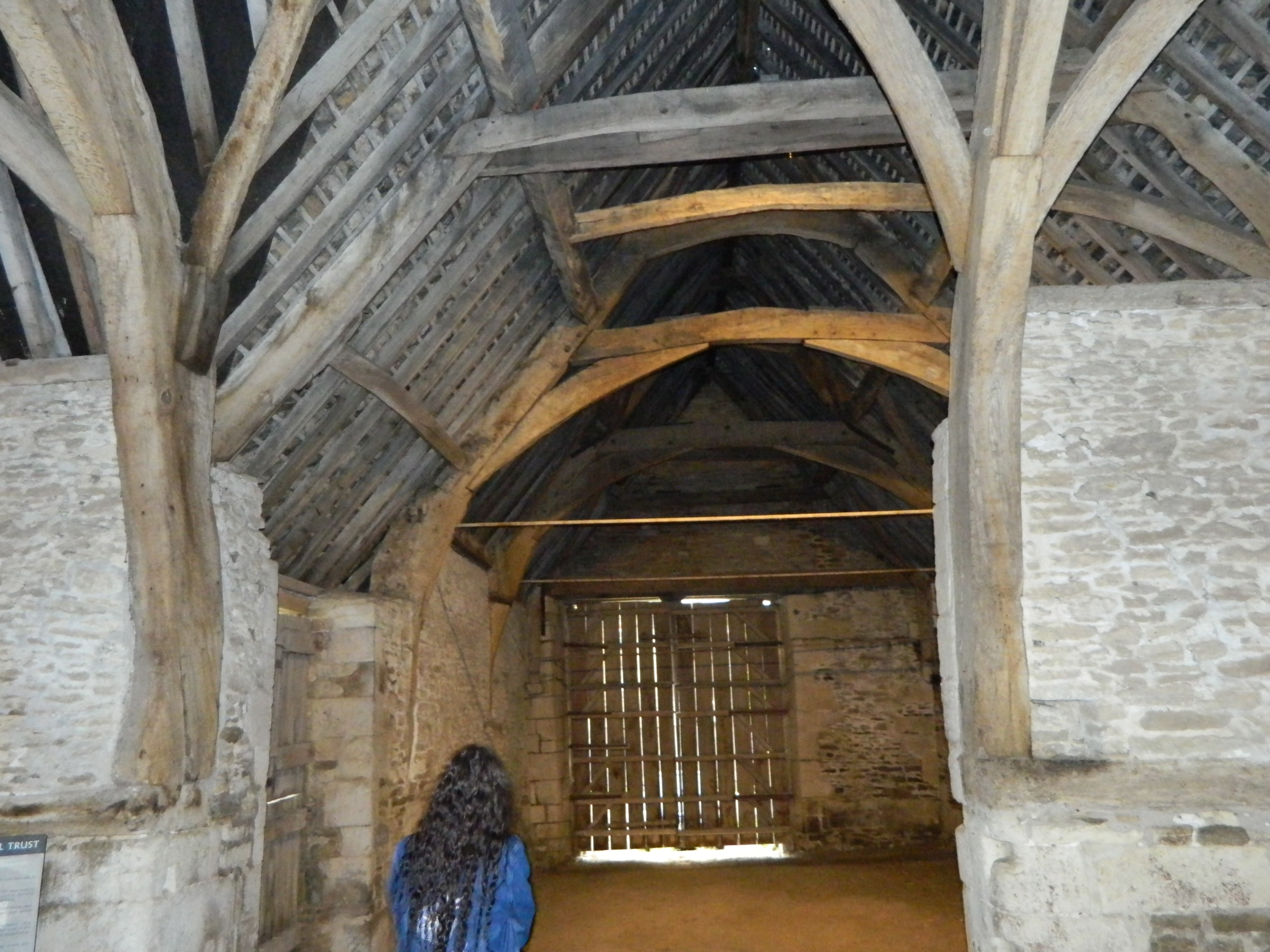 We then went back to London and packed our bags for our trip the next day to meet up with Alex.

We were picked up at the Suffolk airport by Alex and made the 3 hour drive to the Norfolk area to do our hunt, we got there around 4:00 PM got checked into our room at a really nice B&B ran by Bab's and Doug in Norwich area. 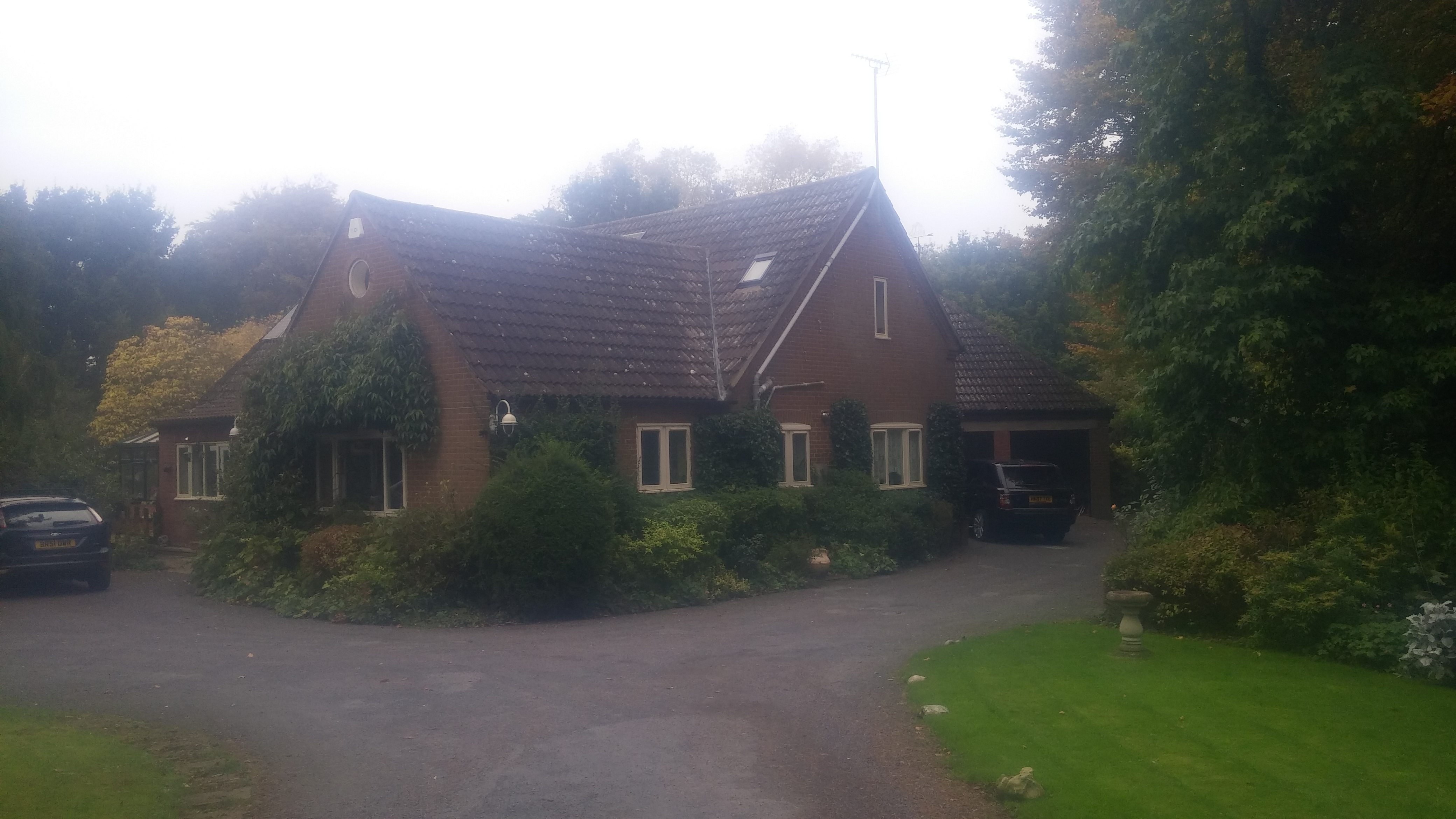 That evening we went for a drive to look over the hunting area before going to dinner and seen tons of game. The next morning we get out early the fog is thick and there is nothing I think that will get other game added to your list then to see a beautiful Red Stag standing in the fog and you know you just got to have one. 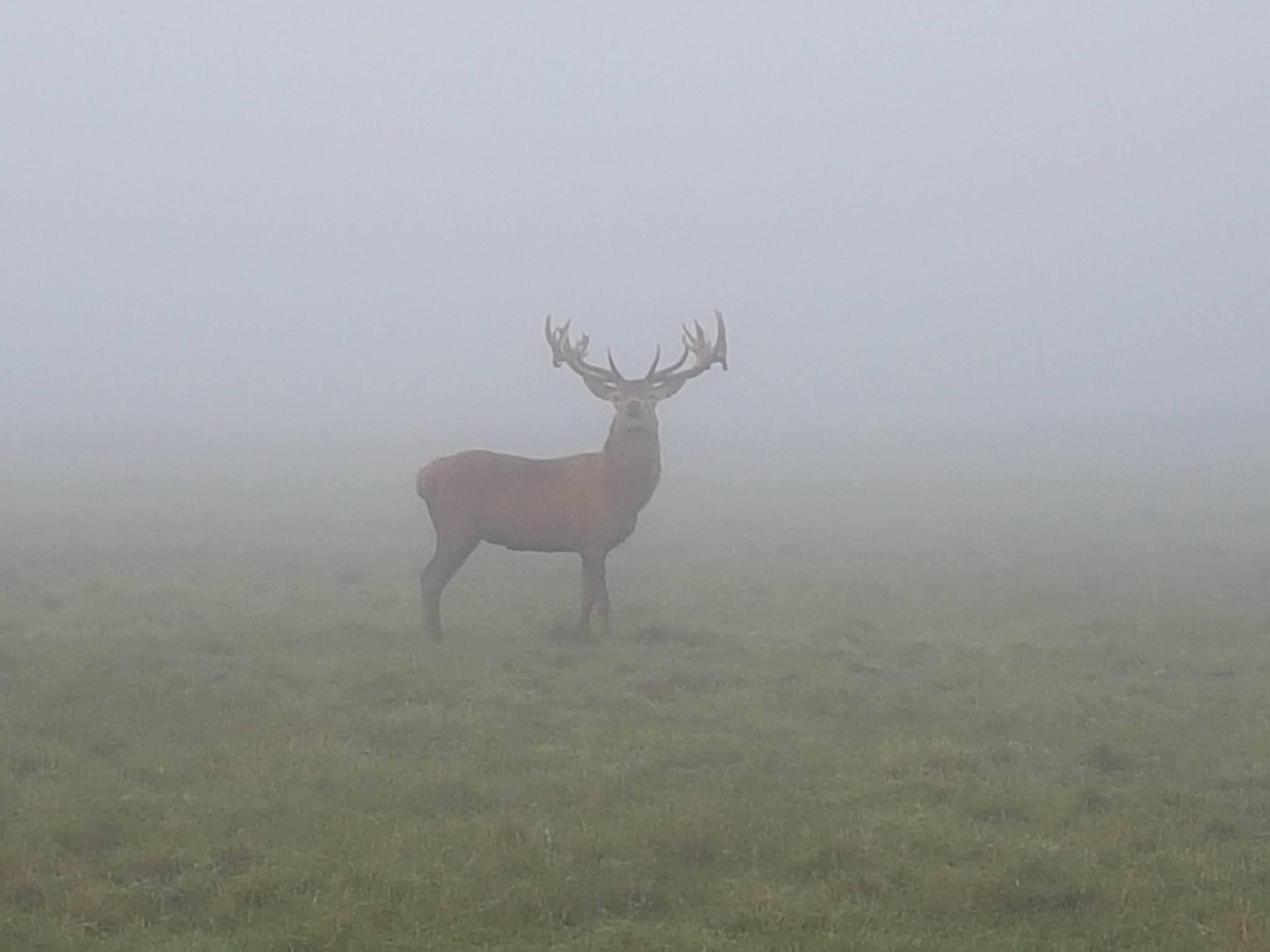 Well we didn't have much luck with Muntjac that morning after doing a stalk with the Game Keep James. But That Afternoon we set in the stand and had a female and a young male come within 30 yards of the stand. About an hour and a half before dark we went on another stalk with James and Alex and at last light on the first day I put my Muntjac in the the freezer. Next morning we get our pictures and Alex and James get the back straps off the Muntjac for starters on our meal that evening. 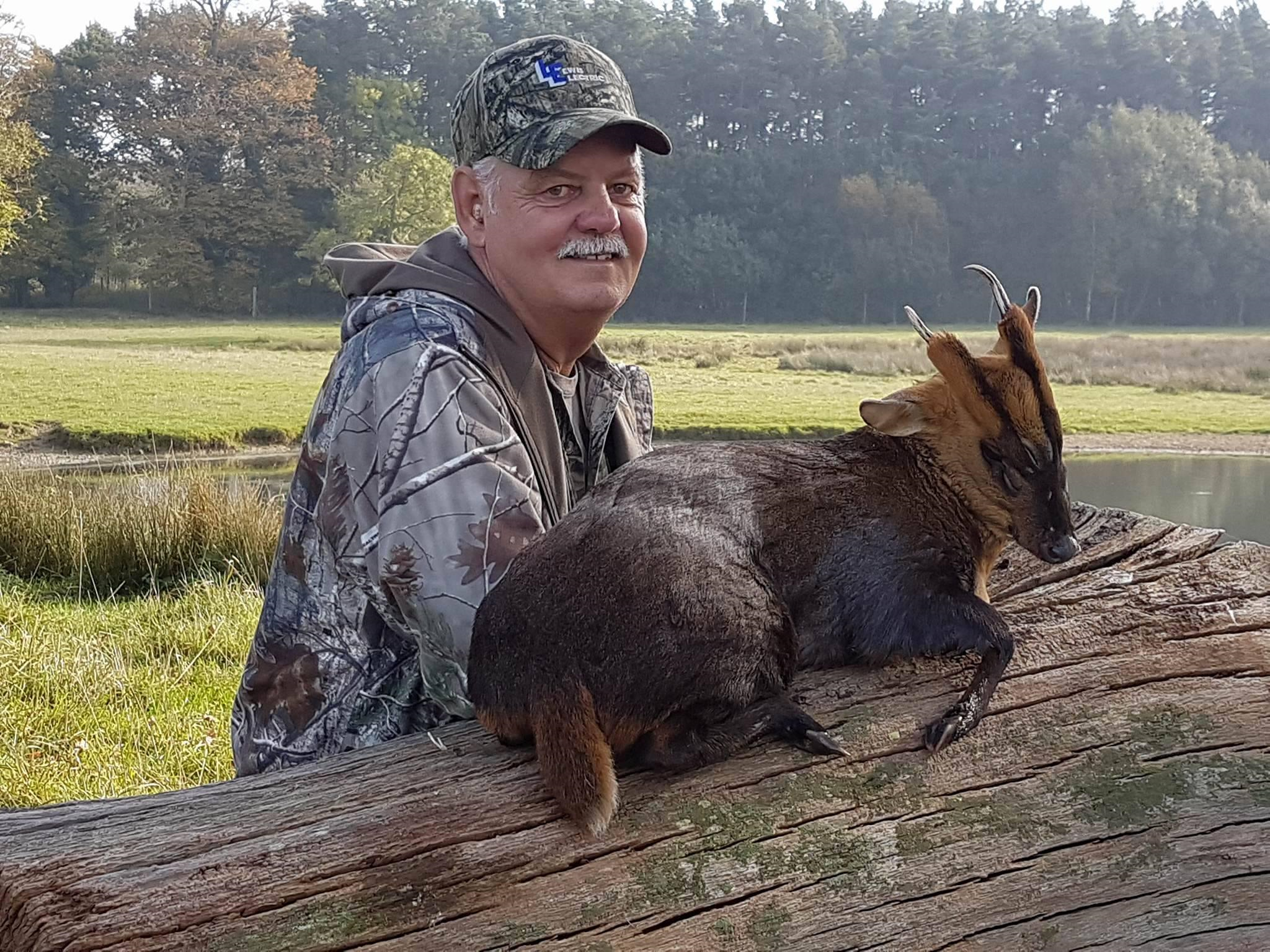 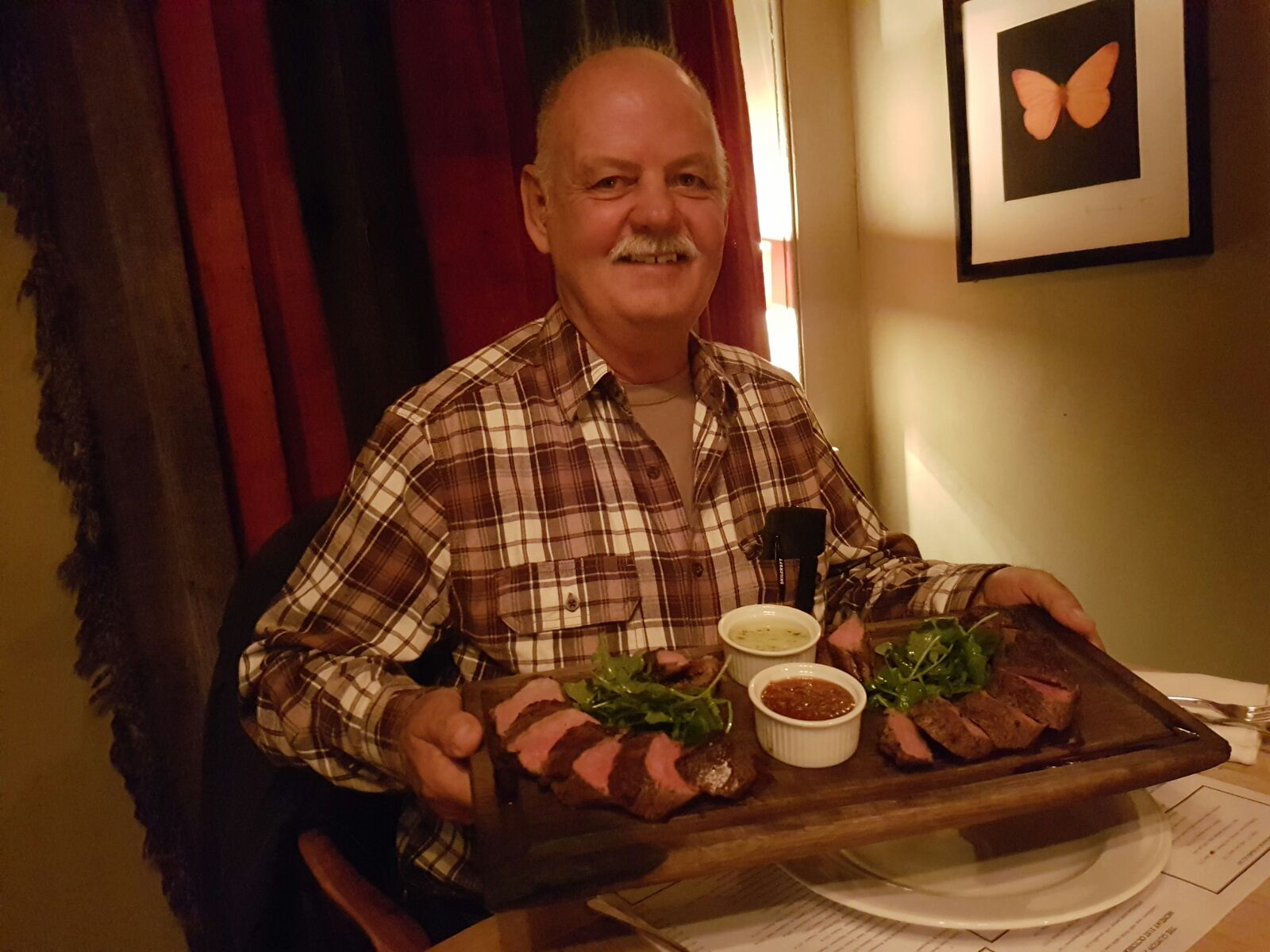 while doing so Alex pulls me aside and ask if we were interested in taking a Red Stag as CWD didn't open for hunting til the next day. well after a little discussing of the price Ok very little as Alex made an offer I couldn't refuse. we went out first for Deb's yeah at this time she doesn't even know she's got one. we stalk up to shooting range and ask Deb what do you think of that one and she say's it's Beautiful and Alex said well Happy Birthday from England and Bobby and hands her the rifle. needless to say she was speechless she thought we were playing a mean joke on her. Nope and her stag is down! 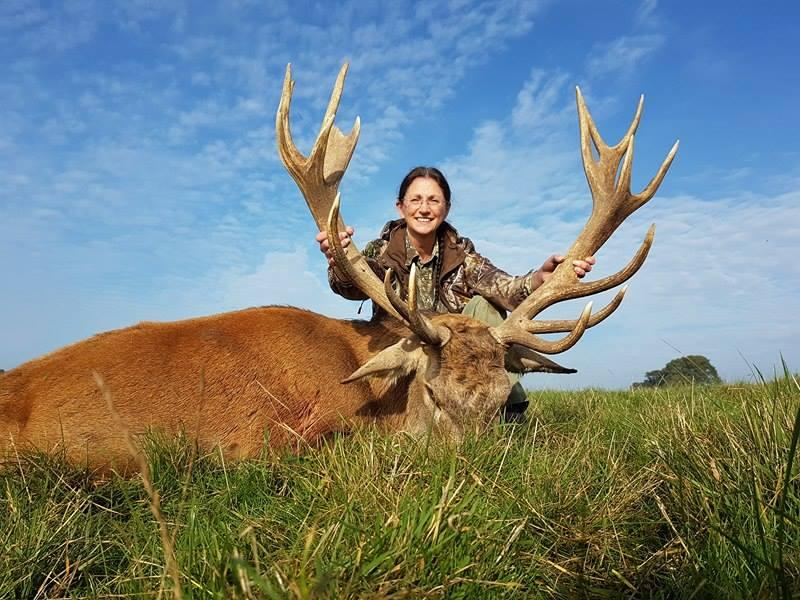 Then about and hour or so later the one I wanted was in sight we had to wait until it was clear of the other stag's and Hinds but when it was It Was Mine!!! 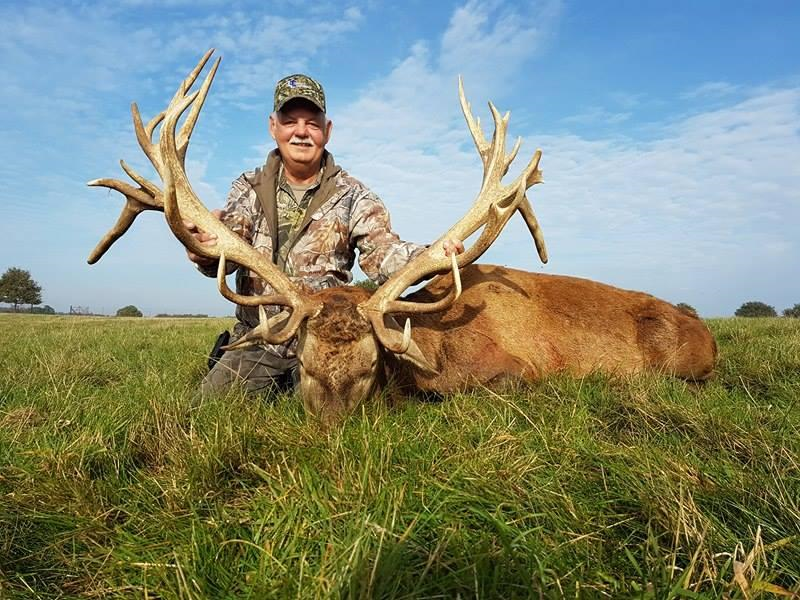 Well we got them set up for tons of Pics then back to the skinning shed. And Folks there is nothing that will get you Pumped like Hunting Red Stag in the Rut and listening to them roar. That evening before dinner we went and set in the stand just to get an idea of what kind of Chinese Water Deer were in the area and there were a lot within 1 hour we had counted 7 within shooting distance could not wait for the next morning, had to anyhow. next morning Alex let us know that we were going to another area were there was even more CWD then the area we had scouted but the farmer in the area let him know that the fog was so thick you couldn't see 25 yards ahead. So it was breakfast first then a 1 1/2 hour drive to the new area for CWD. Well they weren't kidding this place was polluted with CWD we seen over 30 CWD 1 laying in the weeds not 30 yards from the stand and 2 playing games running around the truck they didn't know they were putting on a show for Deb sitting in the truck with tinted window. Well the Dream came together at last light and 250 meters when my monster CWD gave me my shot. I was one happy hunter to say the lease. 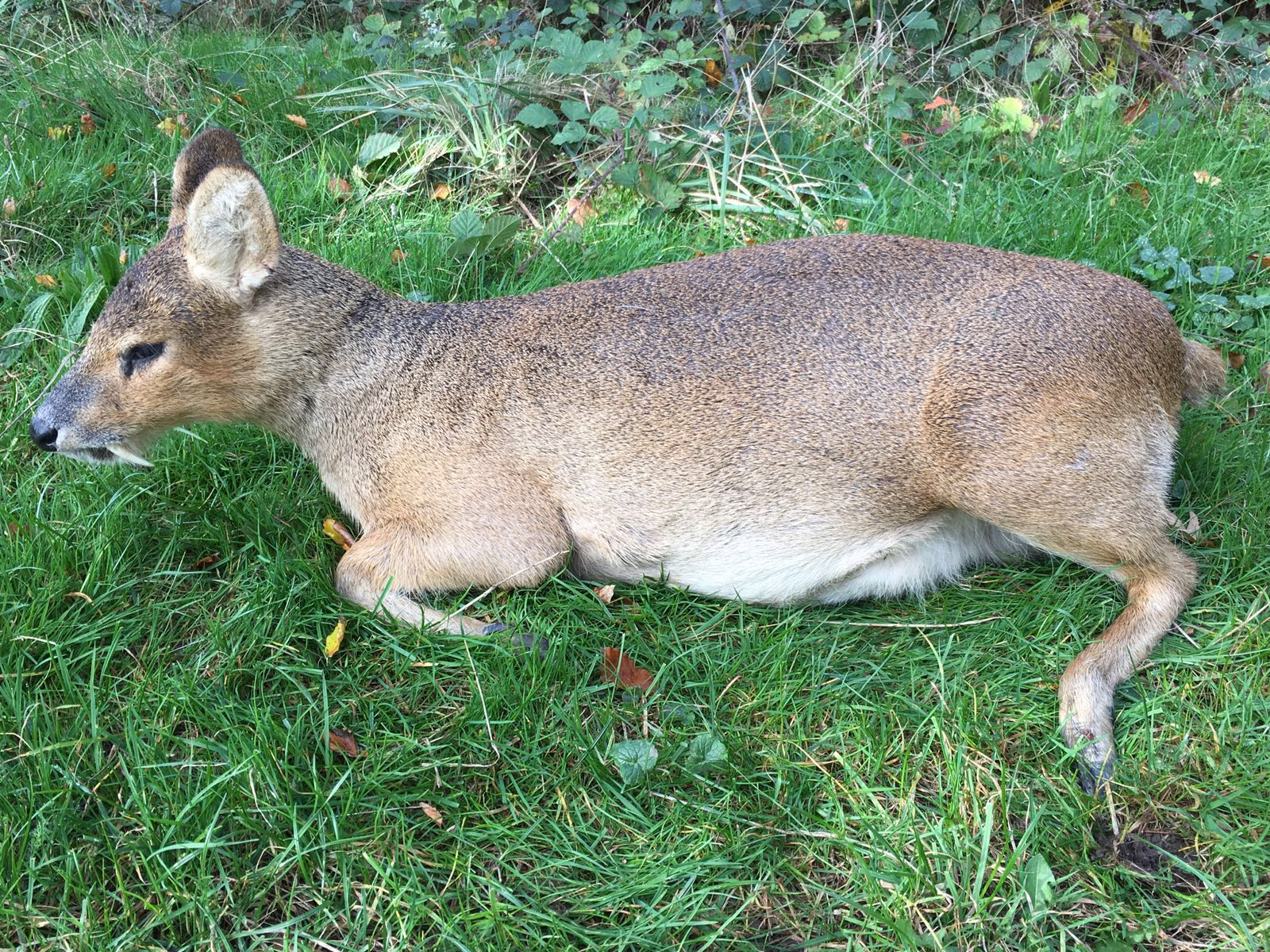 Folks if you need a Recommendation for Alex Hinkins Wings Hunting & Shooting this is it. The wife and I had an Awesome time and were planning a trip back for Roe Buck next year with Alex before we even got out of the UK.
Also Added are a few things Alex showed us like the Worlds Oldest known working saw mill 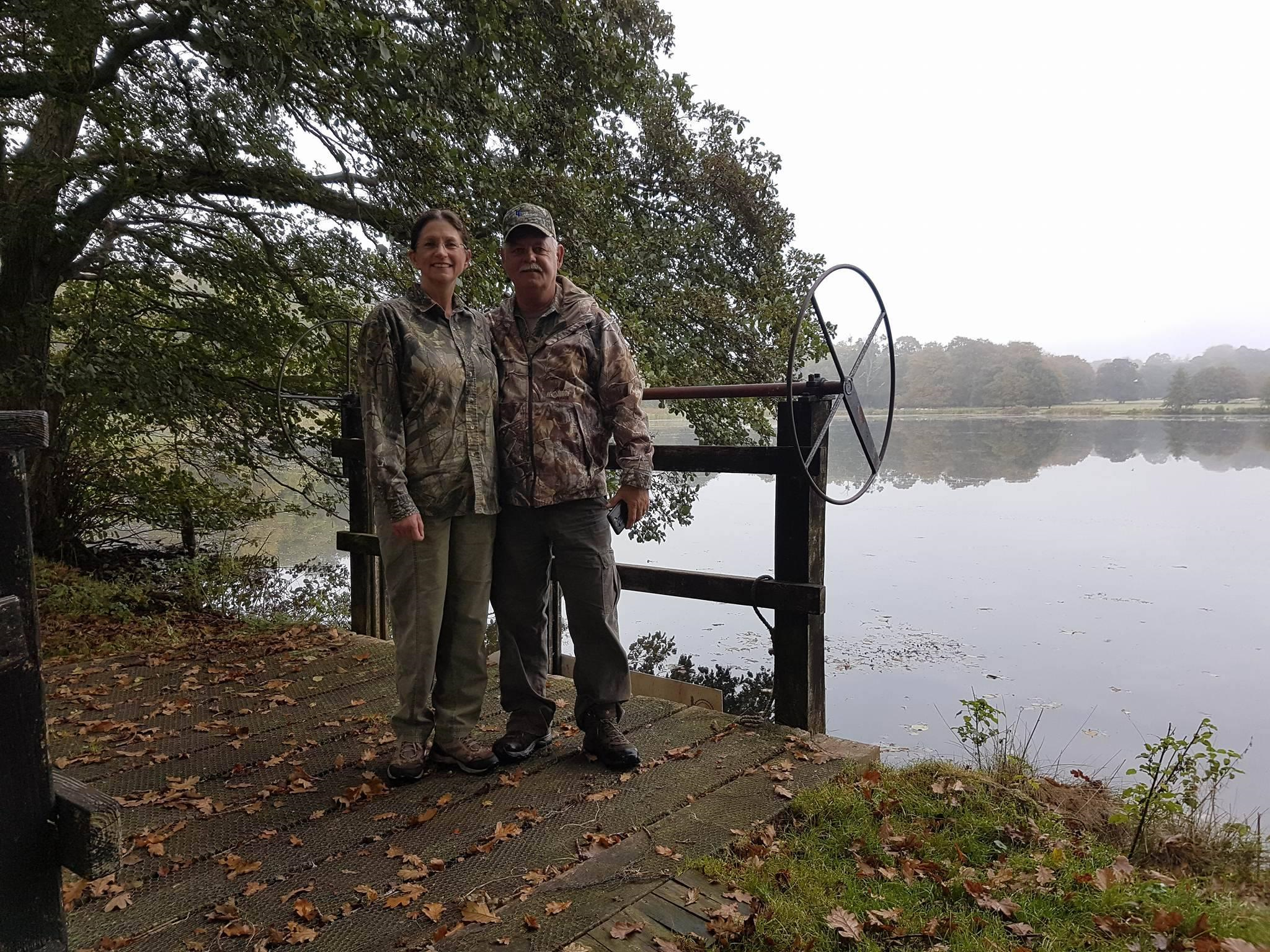 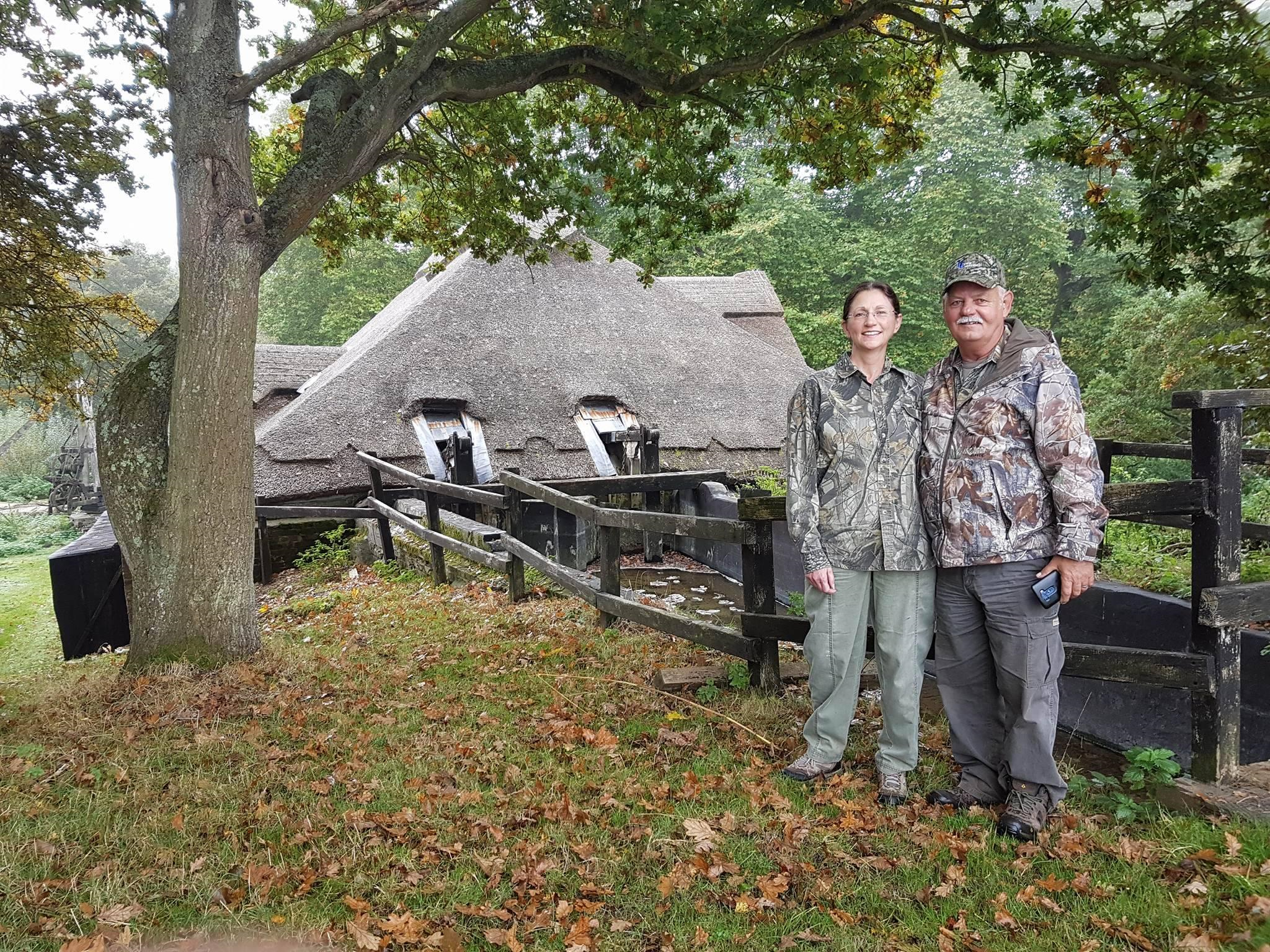 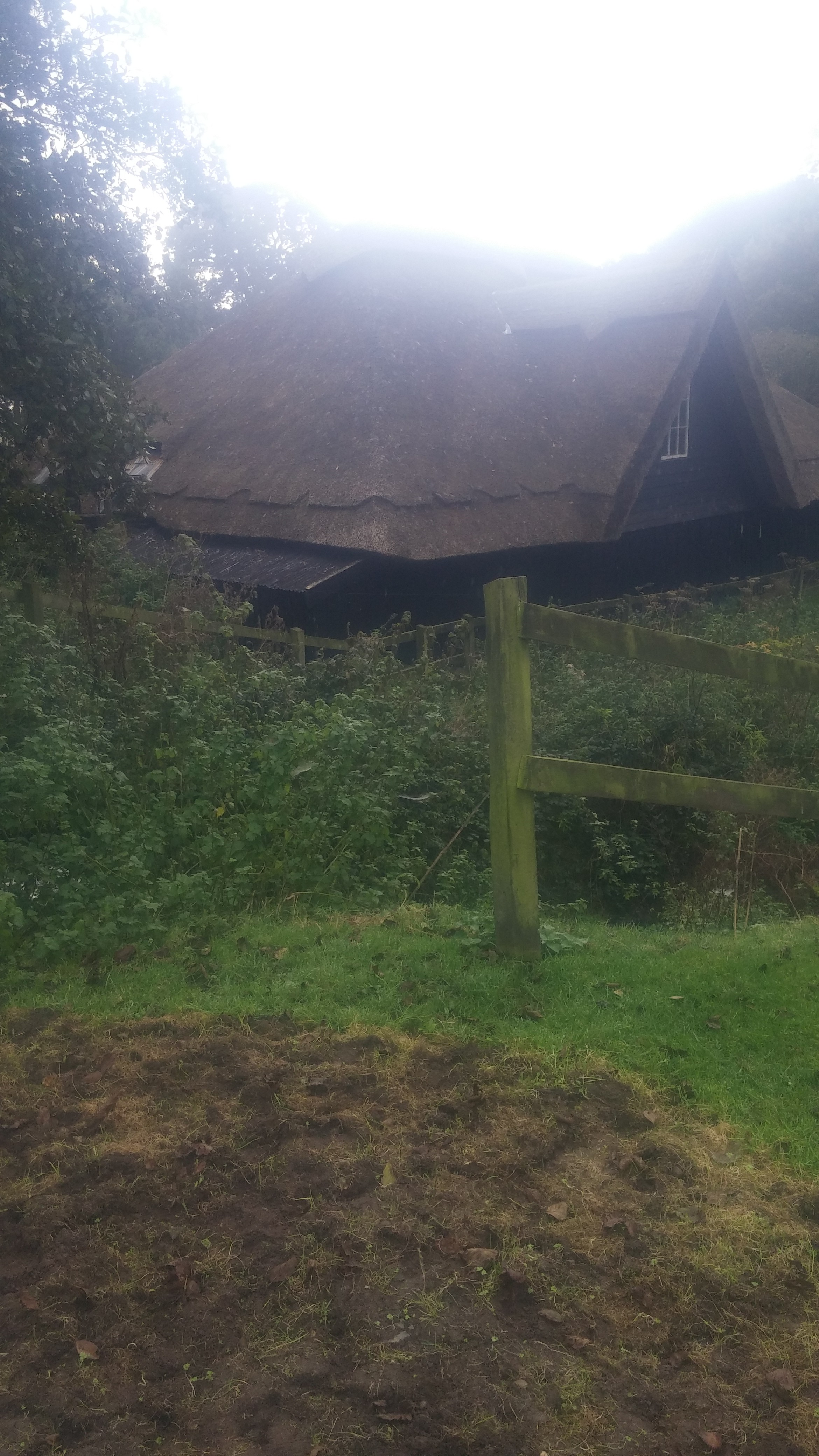 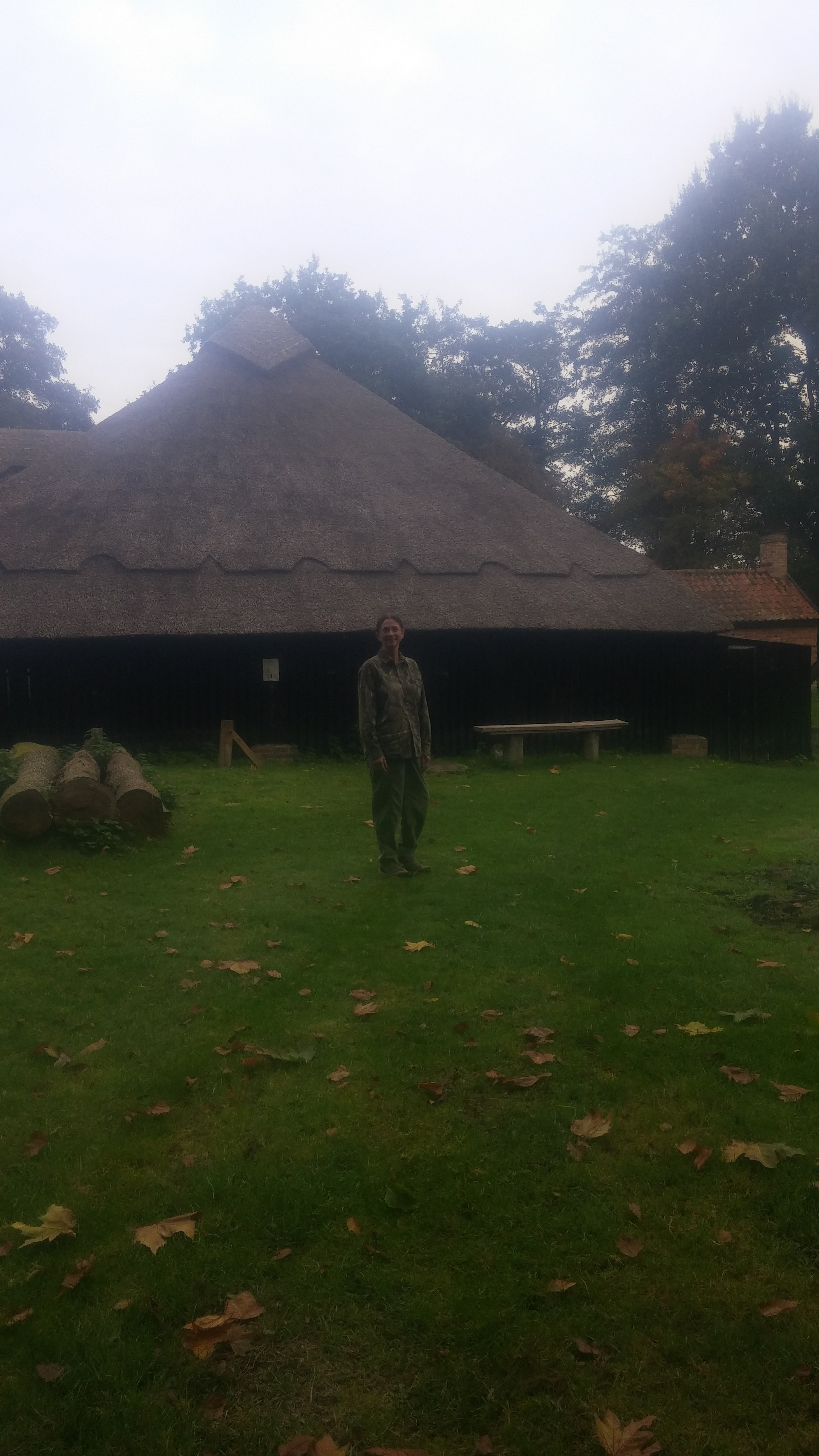 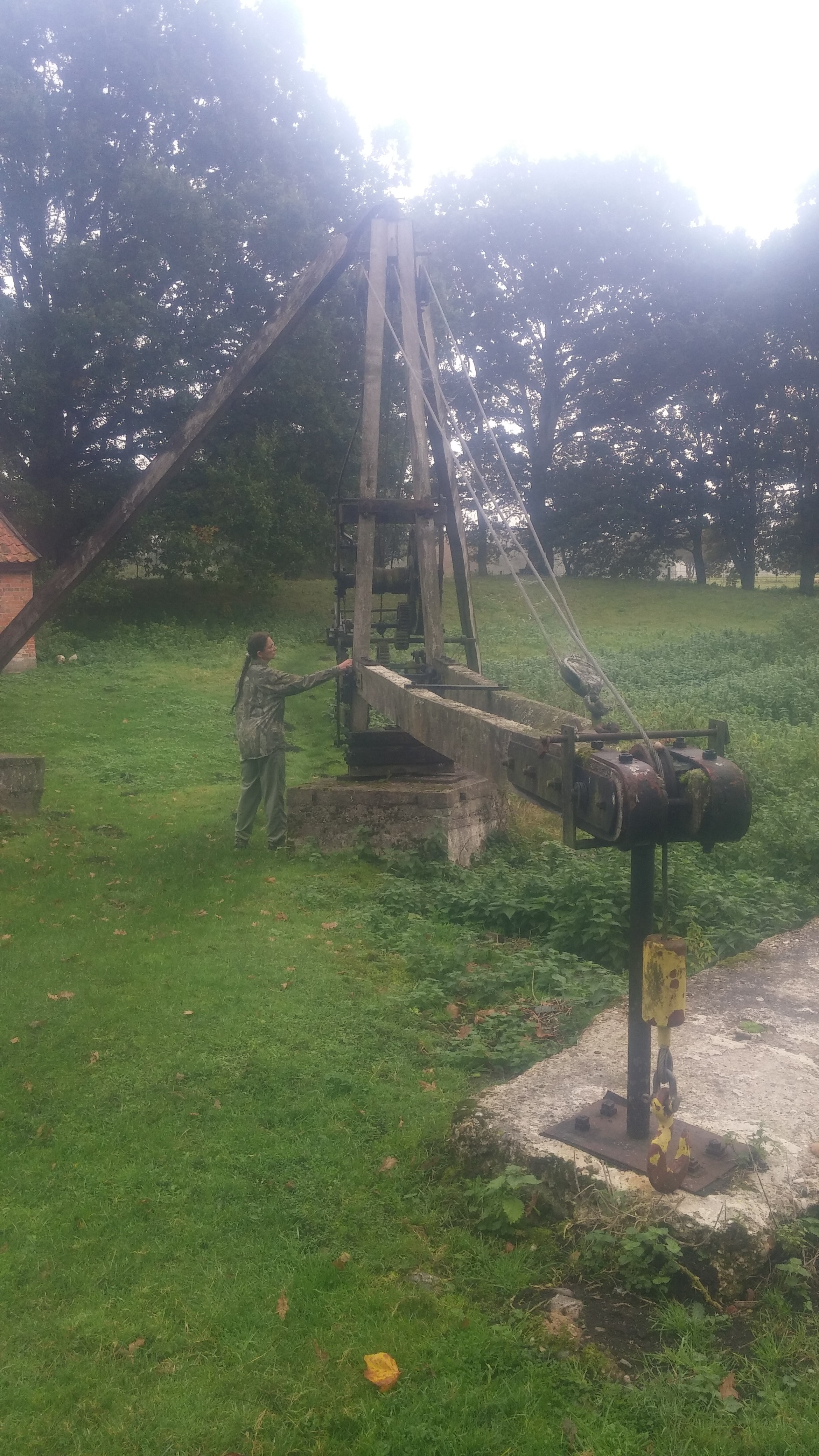 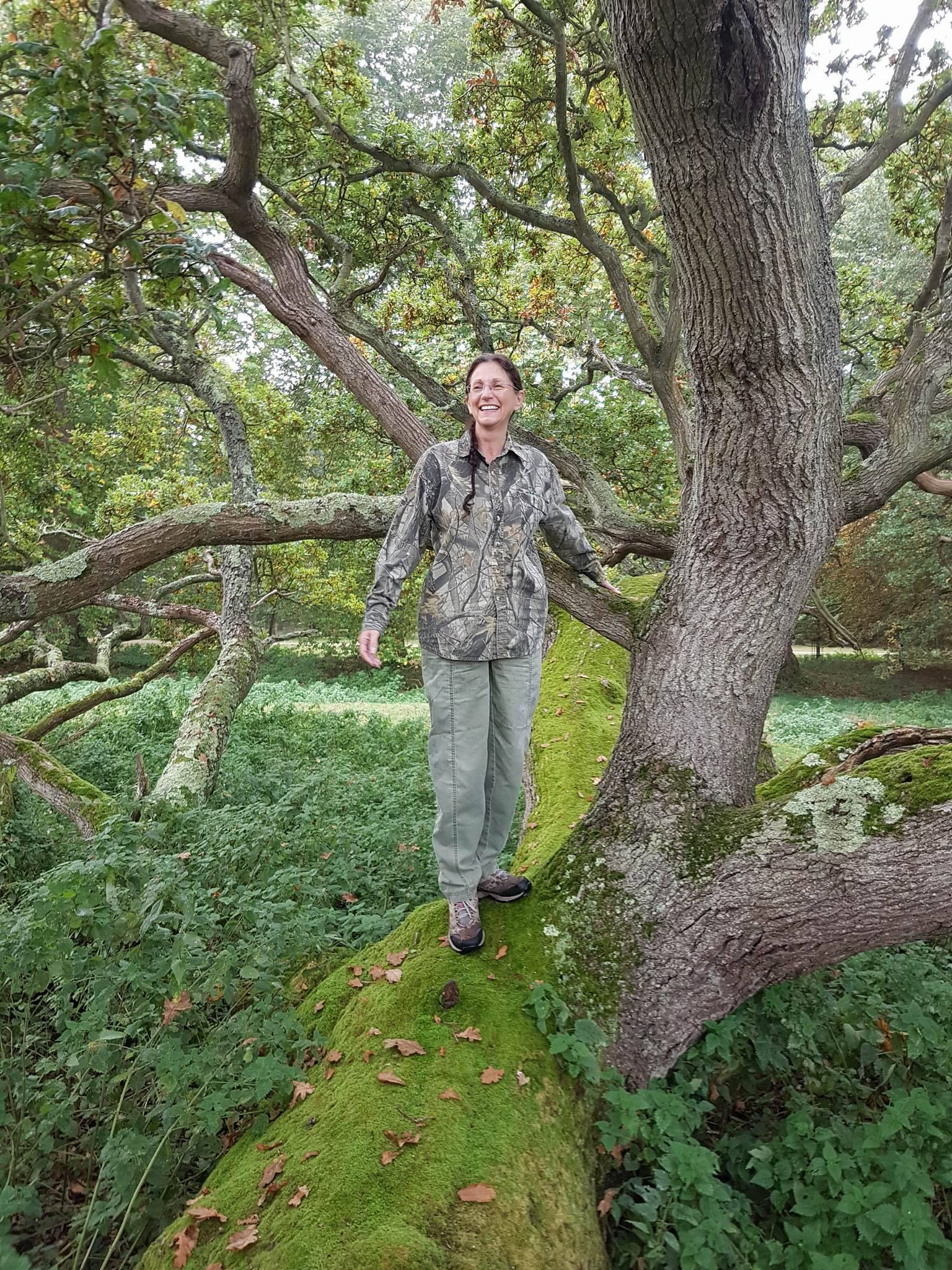 and yes a Live Oak Tree the wife was trying to figure out a way to smuggle it home as she thought it would be a perfect tree for her tree house.
Last edited by a moderator: Nov 11, 2016
Enjoy Life Now! It has an Expiration Date.

Thanks for sharing, looks like a beautiful place and a great time! Congrats on the hunt
John 3:16

A cultural learning experience and a great hunt all in one! You did well my friend!

All beautiful animals...I especially like the stag! Congratulations to both of you and thank you for sharing.
JasonY

Thanks everyone this is definitely a trip worth doing, I learned more in 2 days on tour then I did in all the years in history class. And the hunting was awesome.
Enjoy Life Now! It has an Expiration Date.

After hearing a Stag roar I would have never believed you could walk away without hunting one.

Congrats on some great trophies for both of you.

BRICKBURN said:
After hearing a Stag roar I would have never believed you could walk away without hunting one.

Congrats on some great trophies for both of you.
Click to expand...

Thanks Wayne and you are right, you just can't walk away without one.
Enjoy Life Now! It has an Expiration Date.

Congratulations on some beautiful trophies!

Congrats on a great trip! Would be a very cool hunt...you managed to get some great trophies. Beautiful photos as well!
"I don't need to shoot farther...I need to hunt closer." - G. Sitton

Looked like an awesome trip! Those red stags are incredible looking. Congratulations!

Thanks Everyone it was an Awesome Trip and looking forward to going back for Roe Buck.
Enjoy Life Now! It has an Expiration Date.

Thank you Bob for the detailed description of your hunt.I have three offers from various outfitters for Muntjack and CWD hunting and woodpigeon shooting plus SIKA deer already filed in my computer .Your hunt episode and your reference enlightened me very much.Thank you again.If you do not mind would you give some information about the pricing of the hunt and the caliber you used for shooting both Muntjack and CWD(Chinese Water Deer).

nejatuner said:
Thank you Bob for the detailed description of your hunt.I have three offers from various outfitters for Muntjack and CWD hunting and woodpigeon shooting plus SIKA deer already filed in my computer .Your hunt episode and your reference enlightened me very much.Thank you again.If you do not mind would you give some information about the pricing of the hunt and the caliber you used for shooting both Muntjack and CWD(Chinese Water Deer).
Click to expand...

Hi nejatuner not at all, I used 1 rifle 2 calibers for the hunt a loan from Alex for the little guys I used a 243 Win. and for the Red Deer we used a 8 X 64 in a Blazer change out barrels. for the Pricing I will message you because I believe it's against the rules to post prices. If J or Brick say's it's ok I'll post prices at the time I did my hunt for others to see. Bob
Enjoy Life Now! It has an Expiration Date.

Great report - Congrats on your trophies

Some really nice trophies. Looks like you and the wife had a great time. Looks like it was well worth going for. Congrats Bruce

nice report, thanks for sharing, and now has me thinking as i have a work trip to plan for the UK and be real curious as to taking some time for this

dobber said:
nice report, thanks for sharing, and now has me thinking as i have a work trip to plan for the UK and be real curious as to taking some time for this
Click to expand...

I would make s plan for it muntjac season is year round.
Enjoy Life Now! It has an Expiration Date.

Thank you for the great report Bob. Glad you had a successful trip and wonderful memories.

R.
You must log in or register to reply here.