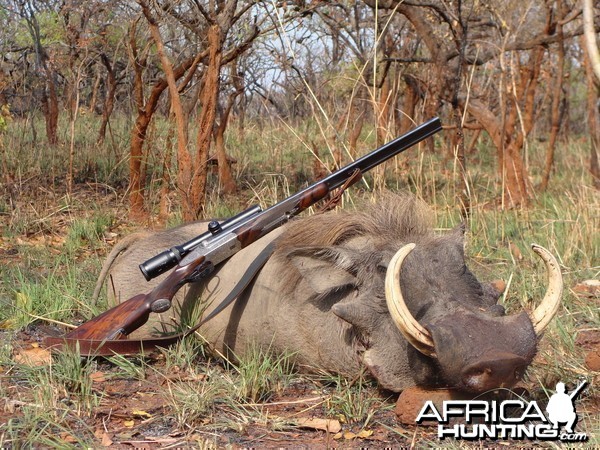 The Hunter
The hunter's desire for a trophy, a memento of the hunt, a reminder of the sweet and the bitter of past hunts, is as old as mankind itself. From the rock art of ancient man, adorning the walls of his cave, to the heads and horns lining the walls of the modern trophy room, trophies have served to give immortality to the hunted animal.

For some, a photograph will suffice, a private reminder of a personal experience, or a small item, used daily, made from the hide or horn of a fondly remembered animal. A bag of biltong, personally made and slowly savored by the hunter, piece by piece through the long hunting off-season, while not conventionally seen as a trophy, is certainly a memento of the hunt.

For others, the animal lives on through the art of the taxidermist, to be enjoyed by the hunter and shared with those back home, those who do not have the privilege of visiting far places and seeing at first hand the living wonders of the natural world. Such hunters will remember for each trophy, each stalk, each shot and each follow up. Eyes will light up in the retelling and the sharing of each tale.

For others still, there are systems in place whereby they plan their hunting lives, working their way through lists of species and sub-species, recording their progress and earning credits as they do so, and setting goals for the future.

And for yet others, the trophy is no longer a memento of the hunt. It has become an end in itself. It has become tangible evi- dence of of an achievement. It is part of the constant challenge thrown out from man to man to compete, to measure one against the other, to achieve perceived success and to demon- strate dominance.

Cultural background has an inevitable influence on the hunter's trophy expectations and his hunting motivations. çš„s it old? may be a question to pass some hunters lips. Worn down tips, thick, gnarled bases or bosses, cracked and green with fighting and rubbing are the attributes of a mature animal, which is approaching the natural end of its life cycle. Broken or malformed horns are fine. å…¸hat is nature, the hunter will say. çš„s it bigger than Karl's? may be the first concern of others. As Pop said to Hemingway, çš„t's impossible not to be competitive. Spoils everything, though.?br>
Husbands and wives, friends and brothers have all had relationships strained and hunts soured by the insidious competitive spirit of man being allowed to intrude on the hunt to the exclusion of appreciation of the multi-facetted wonders which make up a holistic hunting experience.


The Professional Hunter
The professional hunter will in time face a wide spectrum of these desires.

It is not for him to be judgmental about the motivations of his hunting clients. They are products of their upbringing, of their cultures, of the world in which they live and of the pressures under which they are placed, or place themselves. And were it not for them in their totality, with all their good and all their bad, with all their strengths and all their weaknesses, he would not be a professional hunter. There would be no hunting profession.

It is the professional hunter's job to do his very best to meet his clients expectations. He must empathize with his clients, seek to understand their cultural backgrounds and meet their reasonable expectations. He must meet his clients material needs and see to their safekeeping. He must try to open their eyes to the beauties of the natural world, sharing with the client his knowledge and understanding of that world. He must guide them in the hunt as best he possibly can, in accordance with his, the professional hunters, value system.


The Dilemma
And this is where the professional hunter's dilemma arises. What should be the guiding principles upon which his value system is based?

Great strides have been made in nature conservation in Southern Africa in recent decades. Scientific, social and economic principles have been applied to the benefit of wild life and the environment. Increasing wildlife numbers have been widely, but not universally, matched by improved trophy quality. Successes in habitat restoration, the rebirth of biodiversity in previously devastated areas and the reintroduction and conservation of wildlife should be honored and respected by every professional hunter. That respect should underpin his value system.

A genuine, informed and applied concern for the well being of the wildlife in his hunting area will, therefore, be a good starting point. Over time it will make a difference. It will make a difference to wildlife, the environment, to the clients respect for him as a person and for the profession in which he operates. But does the professional hunter have the luxury of time?

A soundly based ethical code of hunting is an essential further element of the professional hunter's value system. But does he have the strength of character to impose it on a strong willed client with his own, perhaps very different, hunting ethic and ambition?

In their heart of hearts, most professional hunters know what it is that should form the basis of their value systems. But the pressures of the modern world intrude on all aspects of life. The influence of these pressures in the hunting field can and does lead to corruption. Competition among peers and the desire to see their names in the record book are real temptations to professional hunters too.

about. African hunting with its wide variety of species is particularly affected. The record books and award programs have turned an individualistic pastime into an occasionally fierce competition. Fair chase, hunting traditions and sound conservation principles often fall by the wayside.

Far too many visiting hunters have only limited time available and yet they want to hunt a long éƒ½hopping list of trophy animals? And many hunters want record trophies in the éop ten? wherever possible. These expectations are simply unrealistic, but they put the professional hunter under extreme pressure. Importantly too, it's the professional hunter's reputation, which is at stake. What does he do, if the visiting hunter's objectives are nothing short of high scoring record trophies and if the client insists on unfair chase methods to achieve his goals? If he dis- regards the client's wishes, an unfavorable hunt report may be the result. And unfavorable news travel fast in the hunting world. Is it reasonable to expect a professional hunter or outfitter to put his business success at stake?

There is only one way to change this situation hunting associations must look for a solution which adequately considers the interests of all, and importantly also those of biodiversity conservation. Sustainable trophy hunting requires that game populations be managed according to biological principles and not those dictated by the figures of a scoring system. Killing a high scoring, yet immature buffalo bull has serious implications on sustainability. This applies not only to buffalo, but to all game in general.

Last but not least a word about hunting ethics. It is generally said that ethics are valid in the eye of the beholder only. What is ethically acceptable hunting practice in one culture or on one continent may be unethical in another. But let us not forget that hunting ethics are the result of thousands of years of hunting traditions they change and evolve with the times, but one thing is for sure, their origin and purpose is in one key factor called sustainability.


The Challenge
We would like to issue a challenge for all hunters and in particular for the international hunting associations. Although this challenge emanates from Africa, we are sure that it applies to all continents. The challenge is to decide what is right and what is wrong and to determine what your own personal value system should and will be. The real challenge then will be to stand by what you believe is right. And if alone, it is a challenge to strive to stand steadfast and to lead steadfastly by example. Let us analyze the conflicting demands, emotions and beliefs; let us get the scientific evidence and most importantly, let us arrive at solutions which will benefit wildlife!

Of course the challenge points towards the international hunting associations and their members, but significantly, it also addresses the professional hunters and guides here in Africa and around the world.

We, as the professionals in the hunting field, need to show our visiting hunters what hunting is really about. That the fulfillment in hunting is not found in inches and points, but in a holistic, participative experience in natural surroundings. Anything else lessens the value of the experience. A trophy obtained easily is not well remembered nor cherished, whereas the one that has been hard earned will always be respected and cherished, as will the memory of the hunt and the animal.

There are a good number of highly dedicated professional hunters who are conducting their safaris, (and hunting clients who hunt), in this way. There are those professionals who refuse unacceptable demands and turn their backs on the money There are those who are seeking a different way to evaluate trophies, to achieve desired ends and to avoid undesirable results.

On one thing we can all agree. We wish to preserve our hunting heritage for posterity. To do so we all need to ask ourselves where we as hunters stand in meeting the challenge.
Last edited by a moderator: Dec 1, 2016
Gerhard R Damm
AFRICAN INDABA - Dedicated to the People & Wildlife of Africa 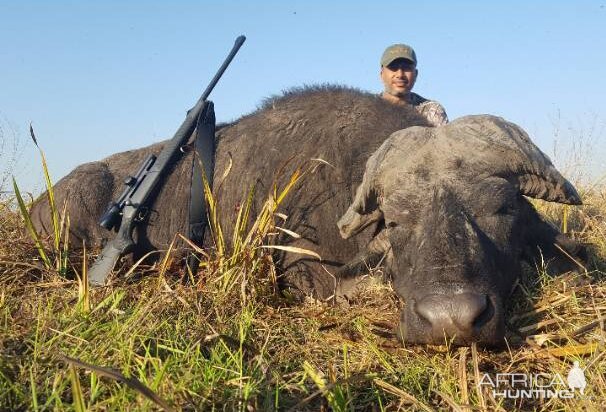 Wonderful buffalo. Any hunter’s dream.
"I love sleep. My life has the tendency to fall apart when I'm awake, you know" - Ernest Hemingway

If I’m fortunate enough to afford a buffalo when I go I would love to take one like this. Just about perfect
G

For the most part,the majority of hunters are looking for that old trophy.You will always have the winner at all costs people.They go through life never realizing everyone around them knows exactly what they are!

Very nice bull!
You must log in or register to reply here.

V
Vervet safari and Tours Tanzania
Who provides you with an interpretive safari to enlighten your wilderness experience. We are safari outfitters specializing in excellent custom or Tailormade safaris in Tanzania. If you are looking for a safari in Tanzania, you have come to the right place and the right safari company. We create Best Memories of your African Safari
Today at 1:27 AM •••
V
Vervet safari and Tours Tanzania
Hello to All members of this group, My name is Basili Agustino I have just joined this great community with the, Vervet safari and tours Tanzania which is a focused Tanzanian tour company that provides travel services that are personally designed and professionally guided by Tanzania’s finest and highly trained professional safari guides,
Today at 1:23 AM •••
E
eballo doubleboy eballo wrote on doubleboy's profile.
Is the Parker still for sale?
Jul 17, 2021 •••
H
hunt 65 Bullthrower338 hunt 65 wrote on Bullthrower338's profile.
You ever sell the Hyme 458 Lott?
Jul 10, 2021 •••