In a tragic incident, a black rhino, recently re-introduced into Akagera National Park in Rwanda, has killed an ecologist who was instrumental in this ground-breaking conservation project.

Up to 20 critically endangered eastern black rhino were re-introduced to Akagera earlier this year, after a 10 year absence from the park. The rhinos were moved from game reserves in South Africa to Rwanda, re-establishing the reserve as a Big 5 reserve, after lions were re-introduced in 2015.

Akagera is managed by African Parks, a “non-profit conservation organisation that takes total responsibility for the rehabilitation and long-term management of national parks in partnership with governments and local communities”.

It is with heavy hearts that we share the below very tragic news from our CEO – a huge loss for all who knew Kris and for rhino conservation across the continent. On behalf of everyone at African Parks, our sympathies and condolences are with his family.

“It is with utmost regret that I inform you that Krisztián Gyöngyi was killed this morning by a rhinoceros in Akagera National Park in Rwanda while out tracking animals in the park. Kris was instrumental in supporting the reintroduction efforts of the black rhino into Friends of Akagera National Park, and was on the ground training rangers how to track and protect them.

“While his family has been informed, details of the incident are still being gathered. Krisztián was a rhino specialist with more than five years of experience monitoring and conserving rhinos in both Majete Wildlife Reserve and Liwonde National Park in Malawi. His Master’s degree was on habitat capacity on the black rhinoceros in Majete, and he had been carrying out his PhD research on the conservation ecology of the black rhinoceros in Liwonde National Park since 2012. He leaves behind his wife Orsi and his young daughter. This is a tremendous loss for all of us, especially for rhino conservation efforts in Africa.

Our deepest condolences are with his family. 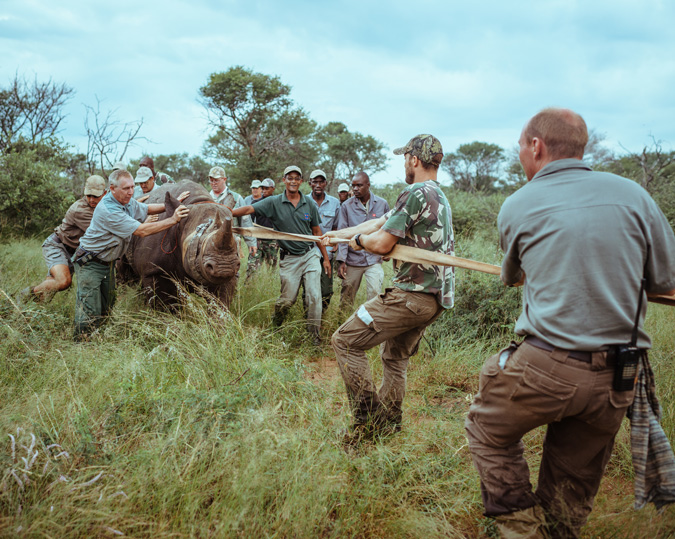 The capture team assists in navigating a tranquilised rhino towards the crate for transport during the relocation project to Akagera National Park.

Sad news, prayers for his family. Well wishes for this conservation project that he was passionate about!
John 3:16

Sad to hear. My sincere condolences to his wife, daughter and family.
Jerome Philippe, Founder of AfricaHunting.com

Very sad and a terrible loss. My condolences to the family.
"When my friends tell me that I have led a remarkable life, I have to admit having done my best to make it so" - John Kingsley-Heath

Prayers for his family.

Sad to hear of such a loss. What a noble crusade Kris participated in to save these magnificent animals. I know his sacrifice will be felt by many.

My condolences to the family

Terrible news....praying for his family

So sorry to hear the sad news. My condolences to his family. It has been a tough year.
K

Sad to here, prayers for his family. Forrest

Sad news, again another terrible loss of life.
Praying for his family

Sad to hear this

National Parks: changing from the 'Big 5' to 'Big 6' animals