Thinking About Africa? READ THIS!

For all those contemplating their first safari in Africa, this warning is for YOU. DO NOT GO! Take it from one who has been afflicted for seven years with a disease acquired during their first hunt with no cure or easing of symptoms in sight. It is known by 99.9% (maybe more). of every African hunter. I say this because there is no known or soon to be known cure and no research to even attempt to cure it. It is that hopeless. It is known by its Latin name Safarisafricanus multa (multiple African safaris).

Symptoms of the affliction usually appear by the second day of one's first visit to a hunting venue on the Dark Continent. The first sign is usually the thought "How the hell am I going to get back here again"? Others, which can be immediate or delayed, include but are not limited to, perusing websites such as gunbroker.com (for dangerous game rifles), AfricaHunting com (for the next hunt), European and American gun manufacturers like CZ-USA.com and Ruger.com. It's almost certain one has been afflicted when, in discussing firearms (or anything else for that matter), the word African rolls off the tongue easier than any other spoken word, e.g. Winchester Model 70 AFRICAN. Similar verbal signs are conversations peppered with the utterings of words and phrases such as Rigby, Merkel, four oh four Jeffery, four-fifty-eight Winchester, three-seventy-five Holland and Holland, Nitro Express or any cartridge with MAGNUM (or mag for short) in the name (three hundred WIN MAG).

The disease is, in some cases, contagious. One must be careful when around other hunters lest they become weakened and start down the road to the same malady. An early indication of this would be an exchange of emails and phone numbers. Attending hunting shows, especially ones by major organizations, can cause early onset of the disease, without the victim realizing it until returning home to check their financial condition and whether or not that remodeling job can really wait and not cause marital strife or even worse, HIDS (hunting induced divorce syndrome).

On the other hand, to some, the disease can be akin to leprosy. Woe be it to them who ask ANY question about past or future "vacations" and out comes the smartphone or tablet with forty seven photos of you holding your rifle, plopped up on top of some disheveled, one eye closed gargantuan beast with its tongue hanging out, and you smiling ear to ear, accompanied by a one hour presentation of your adventure and more photos of your trophies. A sign of immunity would be the recipient saying something like "I have to get home and mow the grass" when there's fifteen minutes of daylight remaining.

In closing, I hope this helps those considering that first African safari. 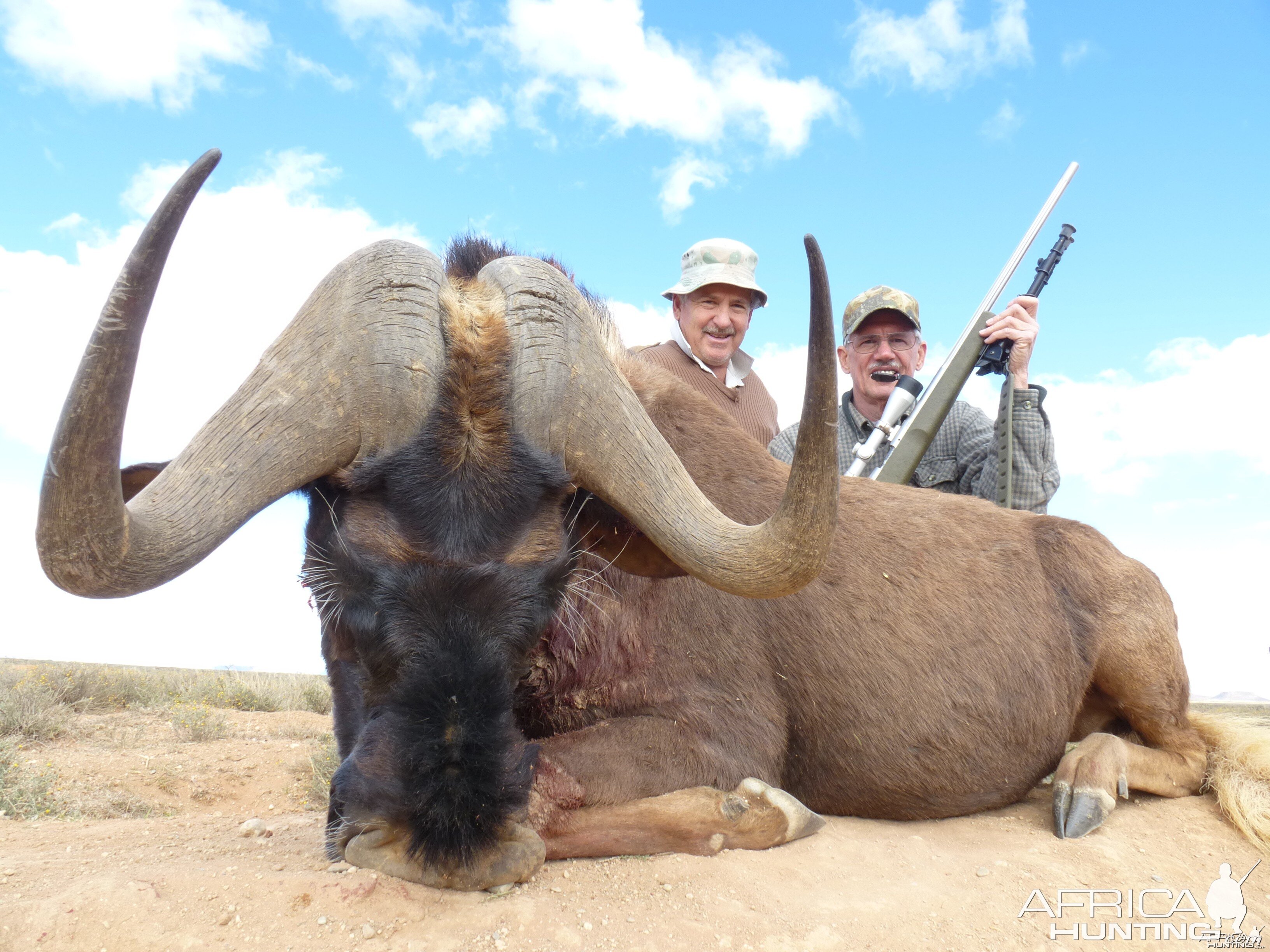 Last edited by a moderator: Jun 11, 2018
"Every man dies. Not every man really lives". William Wallace

Yes the above is all true. You see my condition is even worse, I dream almost all day about hunting some where in the world. Africa has surely infected me deeply. The only mental medicine I have is called “shortage of funds pills” and yes they are hard to swallow! So hunter beware! Think hard and short about hunting the dark continent come and join the thousands who suffer in silence. Hopefully they will never find a cure!
Tommorow is promised to no one. Go live your dreams.

Perhaps we should form a true support group for this illness!

Have planned every subsequent trip to Africa on the flight home...okay that's lie...we were planning next year while we were still there this year!
Check out our free full-length hunting videos here https://www.youtube.com/channel/UCryK-TVoxC2Q5oglxBiRP0g

My name is dobber, and i have a problem
B

My name is John and I'm a huntaholic

More than two posts you are diseased.

All I can really do is to dream of going back. My safari was a one time shot sad to say.

I wished that I had the type of income that is needed to go back a few times but like a lot of hunters I have to be satisfied with what I find here in the states on DIY hunts.

However I do have the bug and it is hard not to itch it.
If you don't care where you are, you are not lost.

I booked my once in a lifetime hunt in Namibia in 07 and now am going on my 17th African hunt in July, there is no cure!!!
Bowhunter addict

Caught the disease in SA 2014. Returned in 2016 to find the cure, no luck. I heard a remedy may be found in Namibia, so heading there in a few weeks. I’ll keep searching until I find it!

CAustin said:
Perhaps we should form a true support group for this illness!
Click to expand...

There is a support group already...
Regular meetings are held yearly in Africa for afflicted members on a 1 on 1 basis, exceptions are made for a 2 on 1 basis.
In severe cases, 2 meetings can be held yearly...

My Name is Randy and I have a problem! Her name is Holly, she is totally afflicted with the Africa disease. We leave for our 4th safari in February of 19. After our once in a lifetime trip for our 25th anniversary she has booked another trip before we left Africa after each trip!! What shall I do!!!

Beretta391 said:
My Name is Randy and I have a problem! Her name is Holly, she is totally afflicted with the Africa disease. We leave for our 4th safari in February of 19. After our once in a lifetime trip for our 25th anniversary she has booked another trip before we left Africa after each trip!! What shall I do!!!
Click to expand...

There really is no hope of ever finding a cure. Some have likened the disease to a booger you can't flick off.
"Every man dies. Not every man really lives". William Wallace

Beretta391 said:
My Name is Randy and I have a problem! Her name is Holly, she is totally afflicted with the Africa disease. We leave for our 4th safari in February of 19. After our once in a lifetime trip for our 25th anniversary she has booked another trip before we left Africa after each trip!! What shall I do!!!
Click to expand...

In my defense ... I am diligently searching for a cure!! Once impacted with the Safari Pox (common name), one must return to Africa for the antidote. Healing is only found in the planning of the next trip, dreaming of the future hunt or fishing trip, and reliving the excitement of the past safaris!!

You are correct Sir!!!
I am on my first Safari at this time. We are starting the 3rd day of a7 day hunt. Already wish I had booked more days and laid inbed last night thinking how soon can I have fund the next trip. It is a disease.

Mark Biggerstaff said:
Already wish I had booked more days and laid inbed last night thinking how soon can I have fund the next trip. It is a disease.
Click to expand...

Mark, enjoy this one and don’t worry until you’re heading home.
Oh and don’t forget us at home! We need pictures and a brief report for our “fix”!
Africa on my mind.

my suggestion to you and all first time safari guys: take as much time as you can! you don't have to hunt, be an observer. heck, i saw more game shot as an observer than i did as a hunter!!! it was great fun, experiencing a young SA man shoot his first big game animal. helping pack out an eland. tiger fishing. actually being in on 4 eland hunts/kills.

more time in country, without the pressure of "having" to shoot something, made it a true pleasure, and probably partially cured my huntaholicism. heck, i'll spend a bit more time over there on this next hunt, and i will probably be cured!!

Funny, my brother who accompanied me to Namibia n 2007 has not gone back for a second go. He had a great time, shot well, got all he wanted. Said he had so much fun he didn't want to try to top it. Now me, been 8 times to 5 different countries, starting in 1985. The disease feels about cured for me, though I keep thinking about a trip to the west (its closer!) for savannah buffalo and roan....we'll see. But I think there is a cure and that is go enough times to get it out of ones system.
You must log in or register to reply here.

Those Thinking About Buying a First Double Rifle

Do You Need Rabies Vaccination When Going To Africa?