The Springbok​
Springbok hunting is a thrilling experience as it's one of the fastest animals in the world and a sort after trophy. The Springbok is the national emblem of the Republic of South Africa. The name of this antelope originates from the early Dutch settlers and the word “spring,” which means to jump.

There are three subspecies, namely A. m. marsupialis (southern parts); A. m. hofmeyri (Botswana, Namibia and the Northern Cape); and A. m. angolensis (Angola). The main difference between the sub-species is their size. Three natural colours be distinguished: common, white, and black. 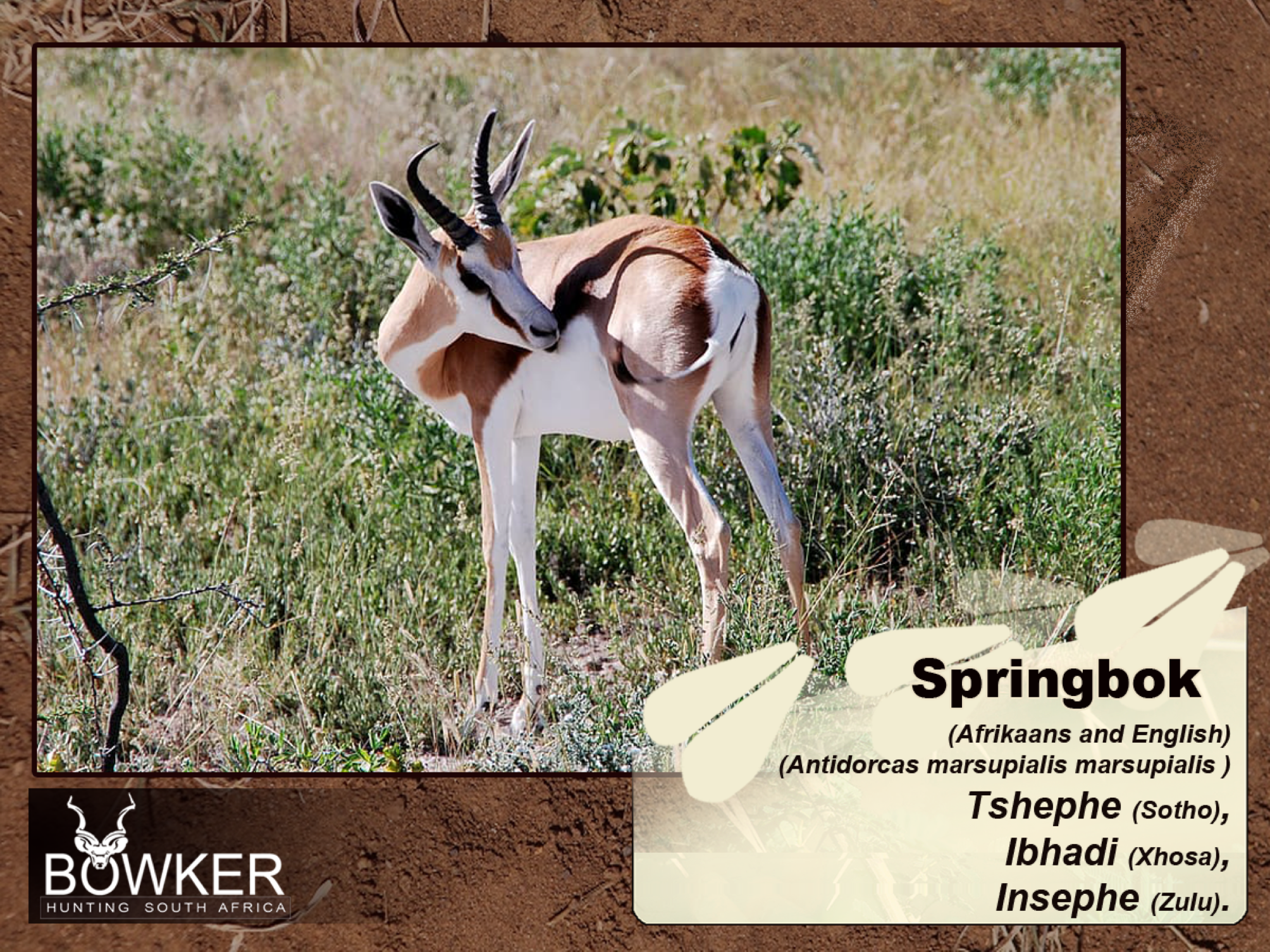 This medium-sized antelope has long, pointed ears, a long neck, and a slender body. Lyre-shaped black horns,10 – 15-inch-long horns that curve backward, are found both in males and females. The male horns are longer and the neck thicker. Both sexes reach 28 inches at the shoulder with a head-and-body length typically between 47 and 59 inches. The weight for both sexes ranges between 45 and 55 pounds.

The Springbok is characterized by a white face, a dark stripe running from the eyes to the mouth, a light-brown coat marked by a reddish-brown line that runs from the upper foreleg to the buttocks across the flanks, and a white rump flap. 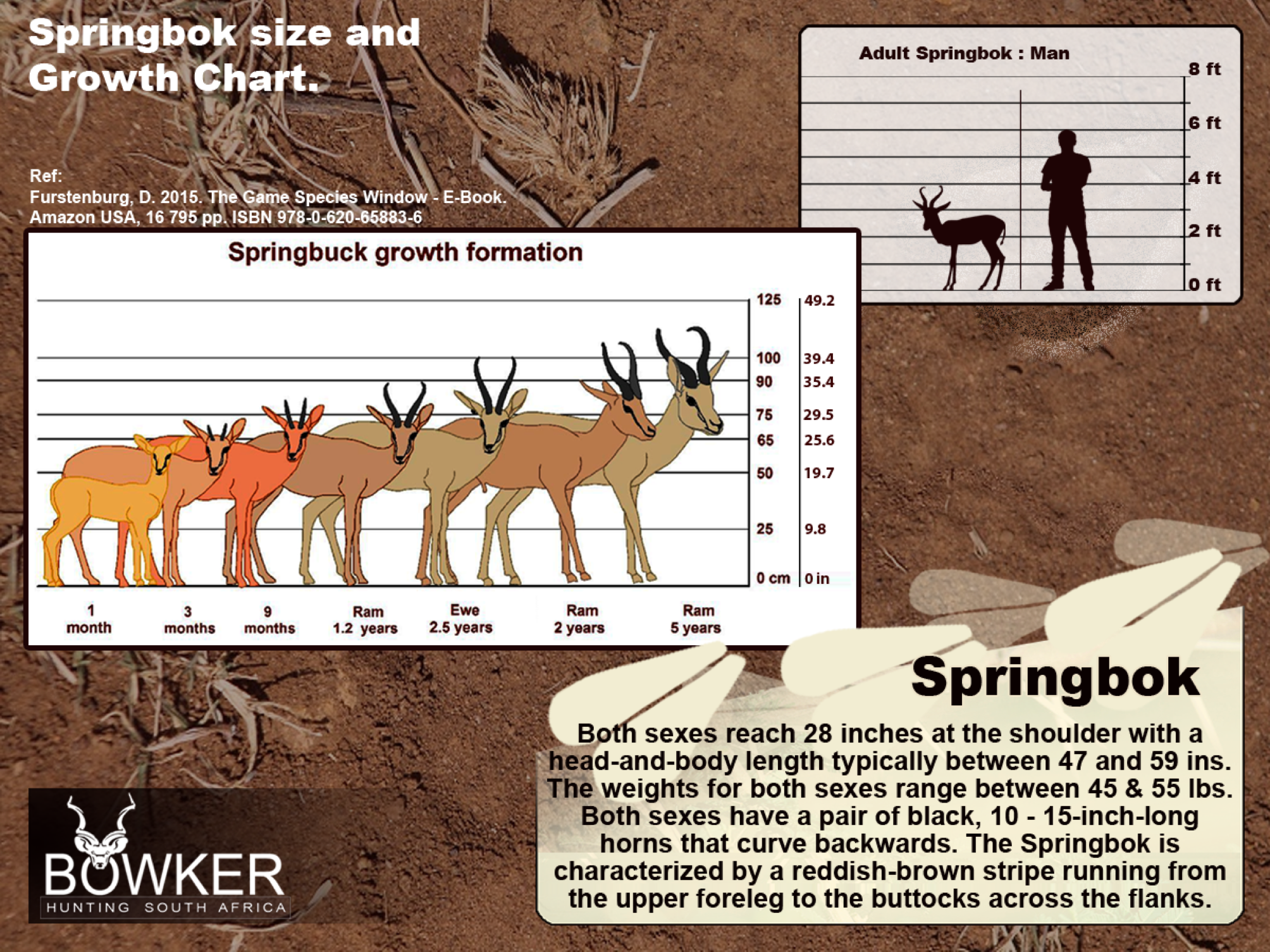 The Springbok’s distribution is mainly confined to southern Africa, except for a narrow extension into southwestern Angola, where it inhabits the South West Arid Zone and adjacent dry savannah of south and southwestern Africa.

The largest numbers occur on private game farms, mainly in the High veld of the Free State and Gauteng provinces, as well as the Karoo and Kalahari thornveld of the Western, Eastern, and Northern Cape provinces. The majority of sub-populations held on private land are still within the natural distribution of the species. 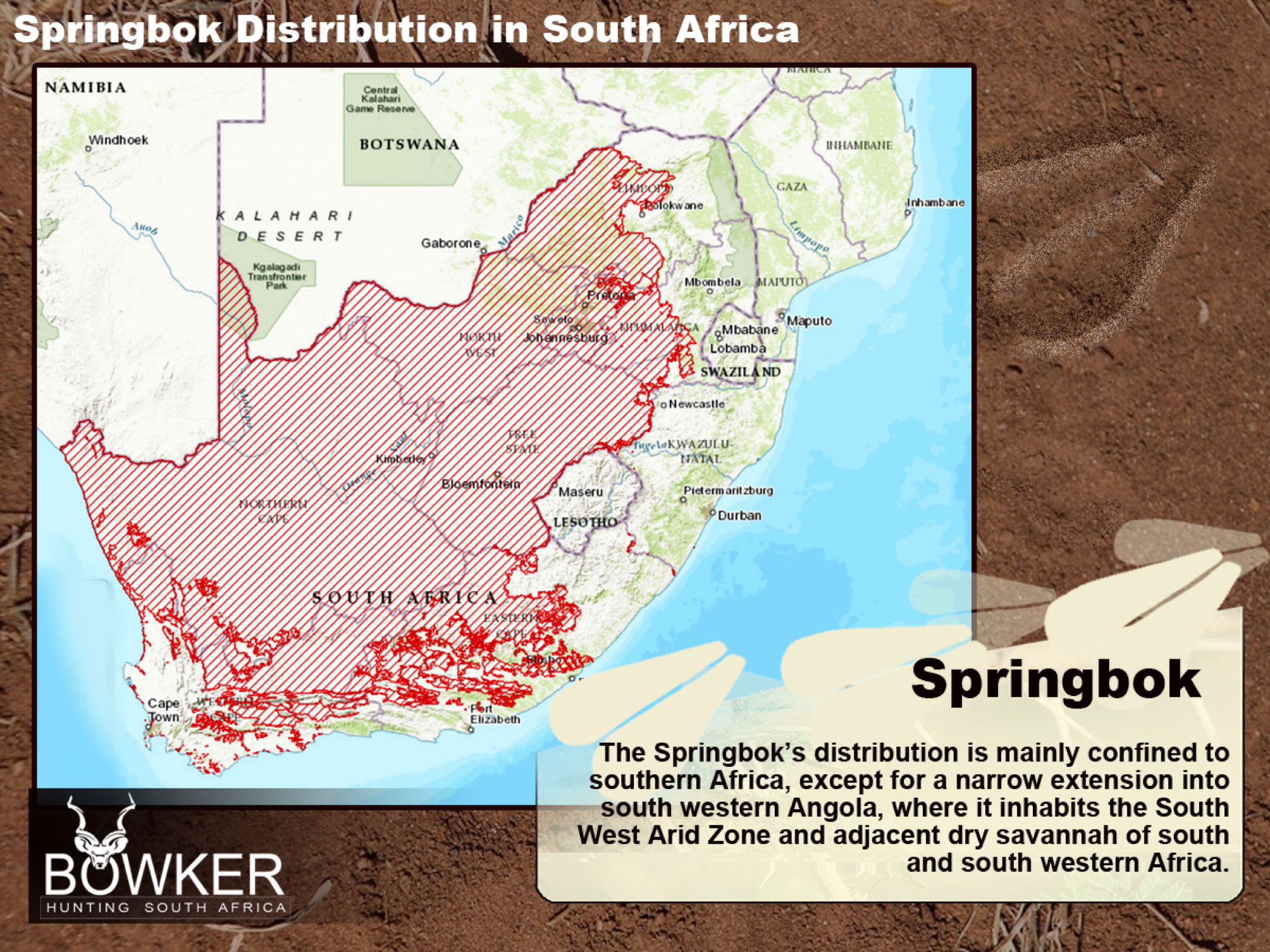 A unique feature of this lovely antelope is the pocket-like flap of skin on the rump which conceals a white crest. When the Springbok detects danger, it exposes a white ridge of hair by erecting the flap. This warns the rest of the group of imminent danger.

When excited Springbok opens the flap to reveal the crest while running and jumping jubilantly. This unique jumping is called “prancing” and is a sight to behold! Interesting jumping behavior can be observed during and after the rare rainfalls in the Kalahari. It is believed that after rains, particularly in the Kalahari; for the joy of living, the animals jump up and down like bouncing balls, stretching their front and rear legs simultaneously, and bending their heads down 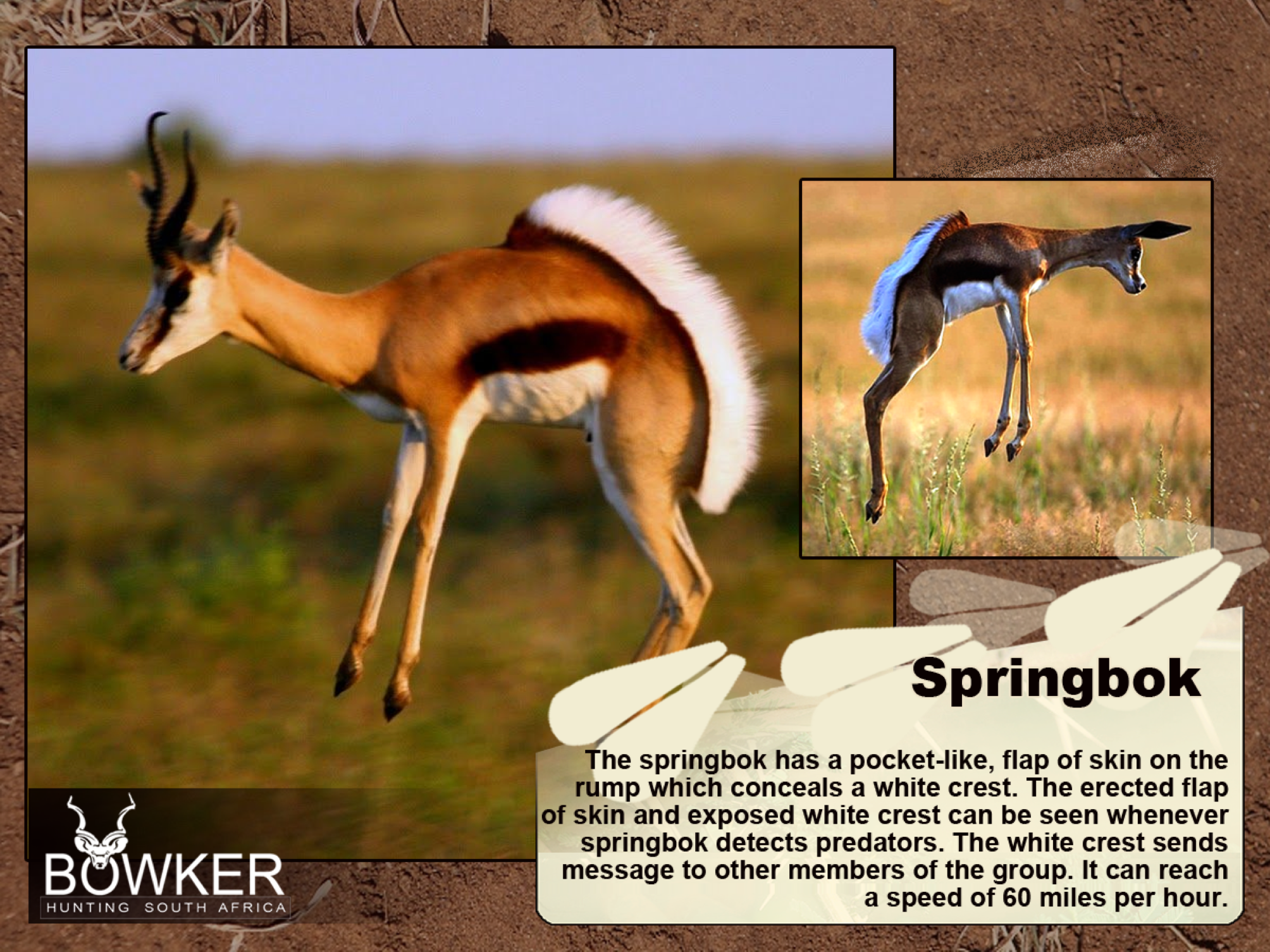 These antelope are mixed feeders, consuming both browse and grass. They prefer to utilize grass when it is young, but otherwise, browse karroid (semi-desert) vegetation which includes a variety of low shrubs and succulents. Springbok survives on moister they get from the fruits and succulent roots they eat, so they are not reliant on permanent surface water. 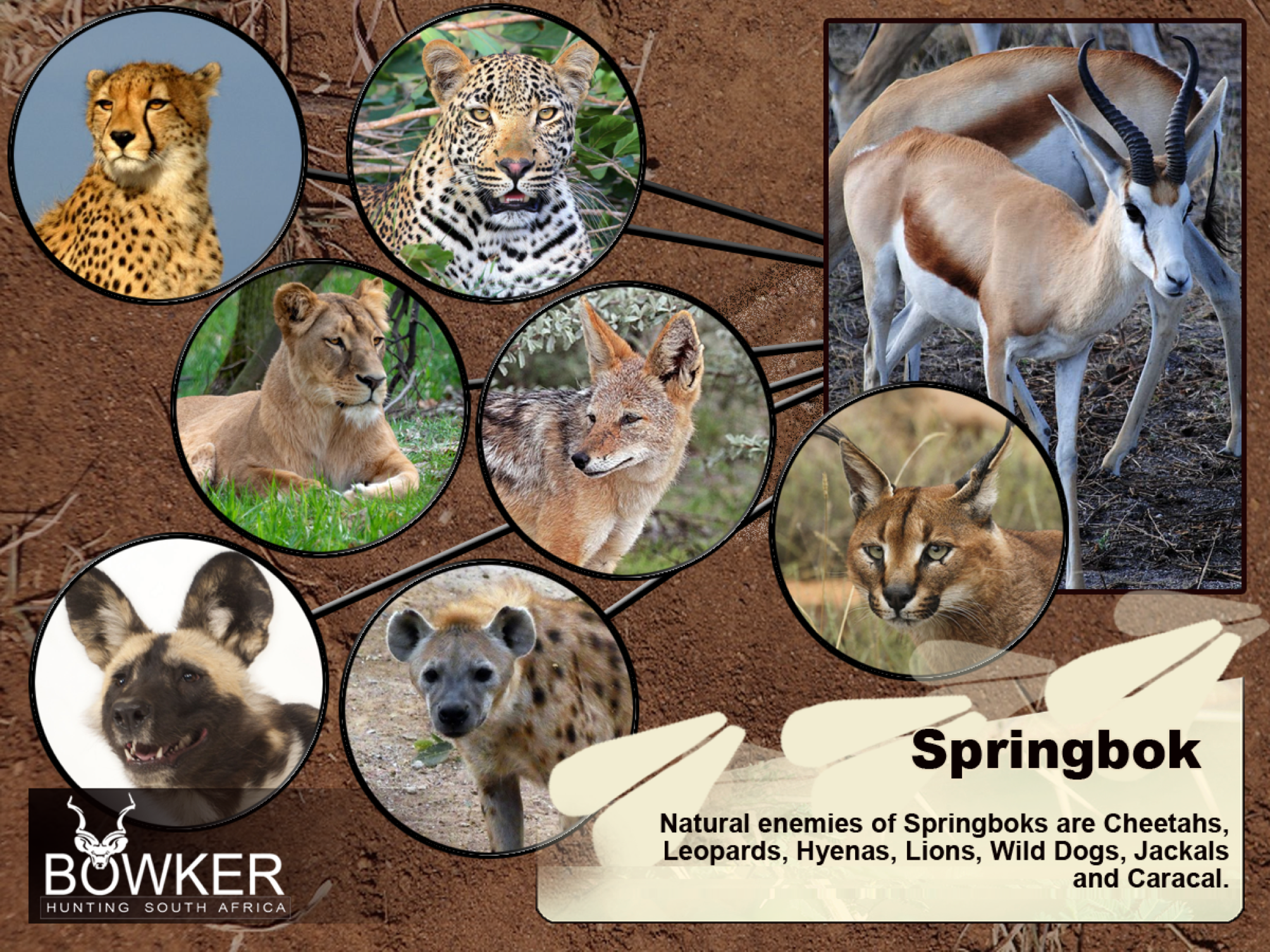 Depending on the weather, Springbok can mate all year round. Young are usually born at the start of the rainy season when food is abundant. The gestation period is 5 to 6 months and ends with one baby being born and hidden in the bush or tall grass. The calf weans at about 6 months. 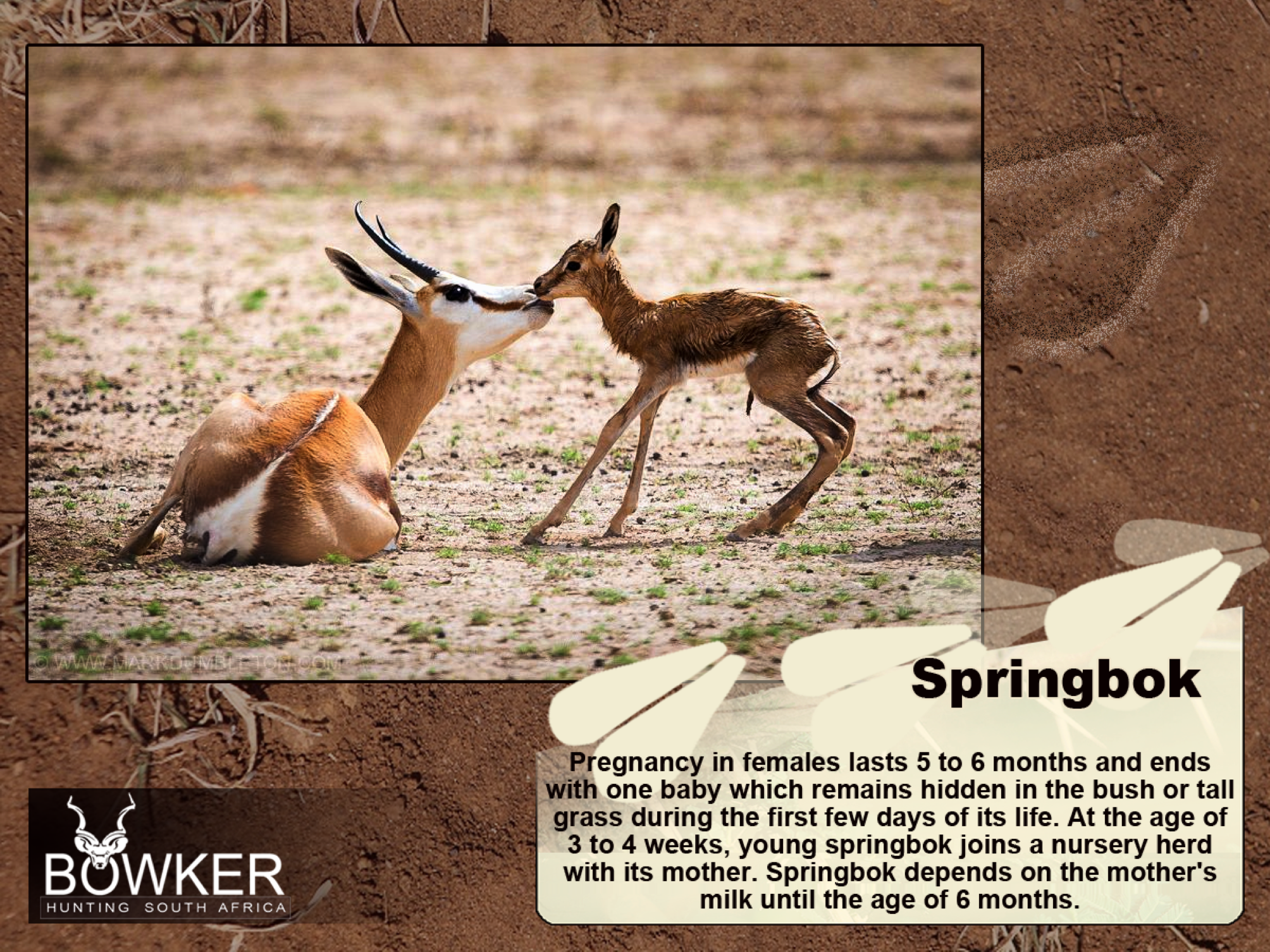 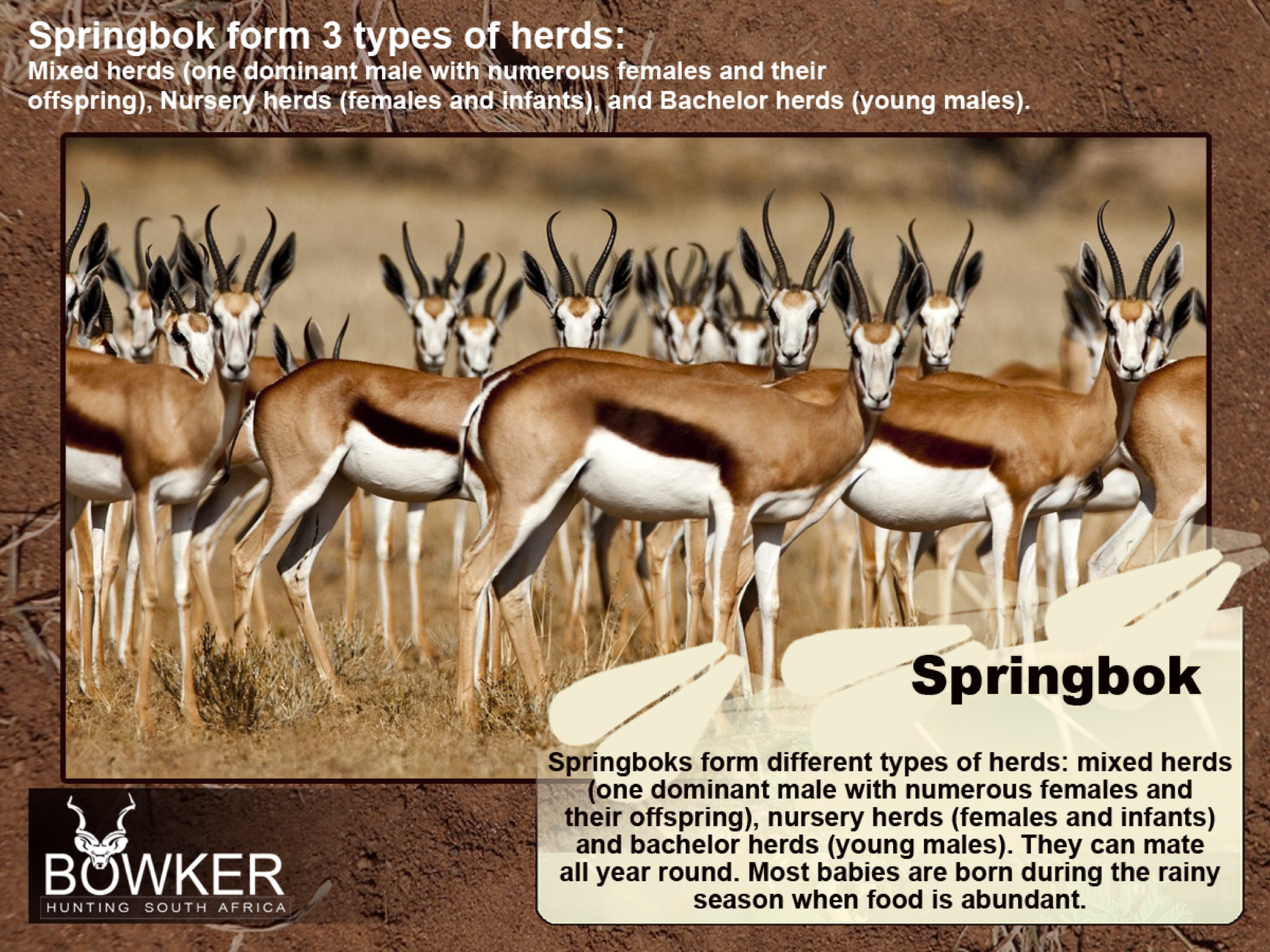 Hunting springbok can be a challenge due to it's excellent senses and the fact that they are fast sprinters. Stalk carefully, keeping the wind in your favor and get as close as you can. Springbok is shot mainly in the open plains, and stalks can be tricky. Sometimes a longer shot will be required. If you can approach within 250 yards, you are doing well, and best take your shot. The flat-shooters will be the right rifle when hunting springbok. 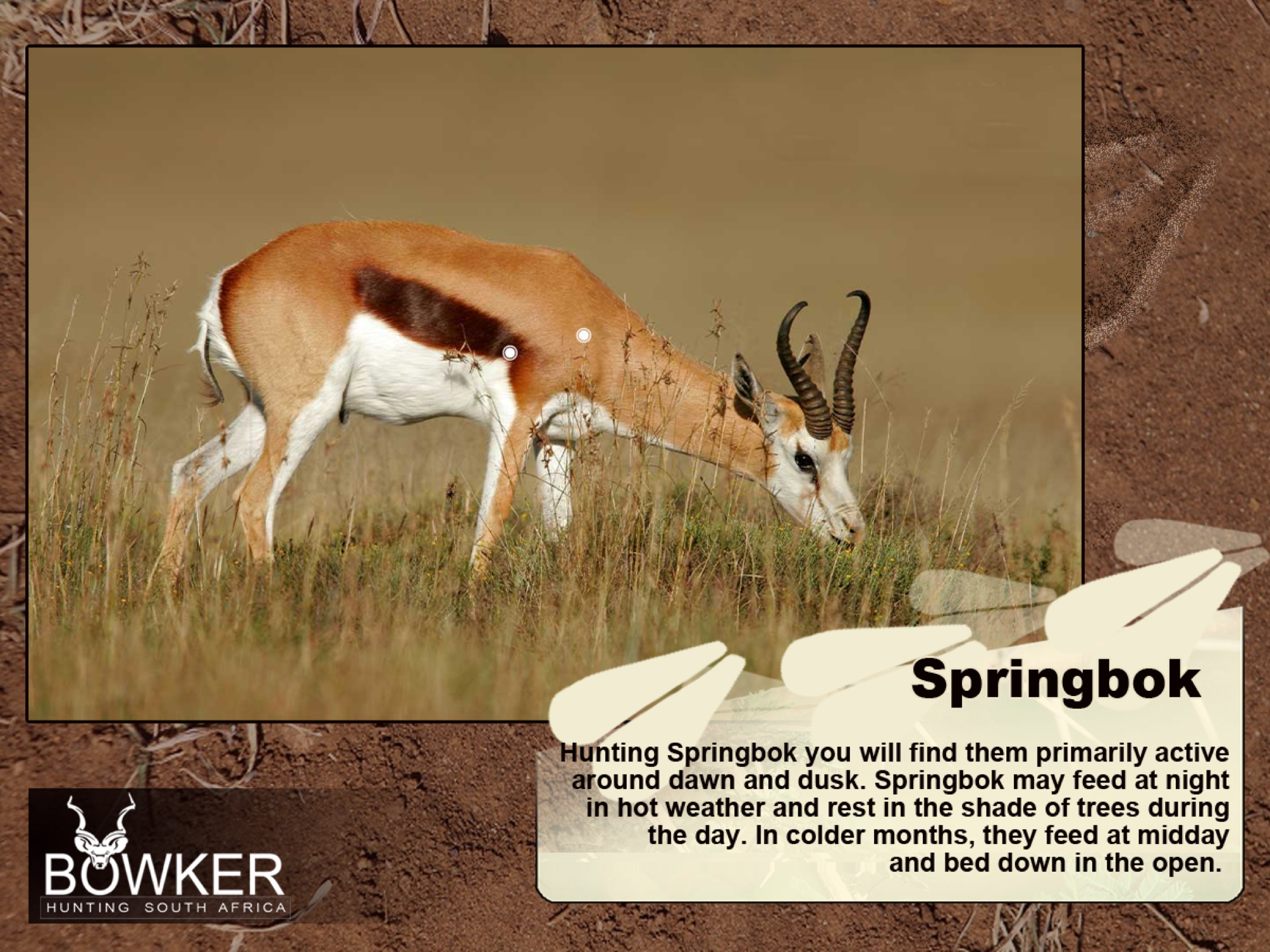 Your Springbok ram trophy should have an average shoulder height of around 28 inches, weigh about 50 pounds, and have a horn length of approximately 12 inches. The Safari Club International Score for a Springbok is 31. The trophy is measured by adding the length of each horn and the circumference of the bases. The trophy quality lies with the width of the bases, the overall length and the curls on the tips of the horns. 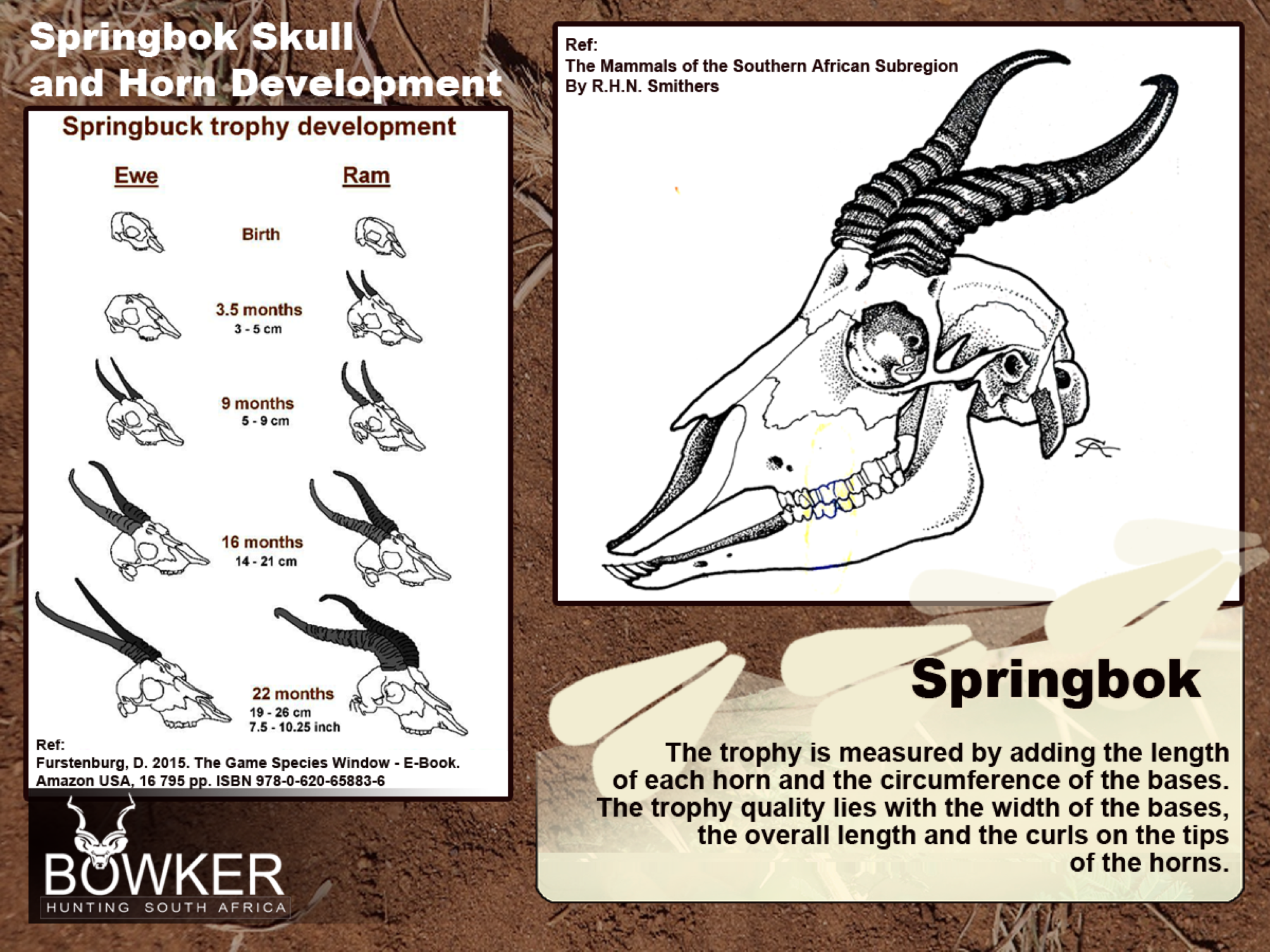 A great trophy to hunt while on Plains game hunting safari. Springbok is included in nearly all of our hunting packages along with Kudu, Gemsbok, Blesbok, Impala, Warthog, and Mountain Reedbuck. 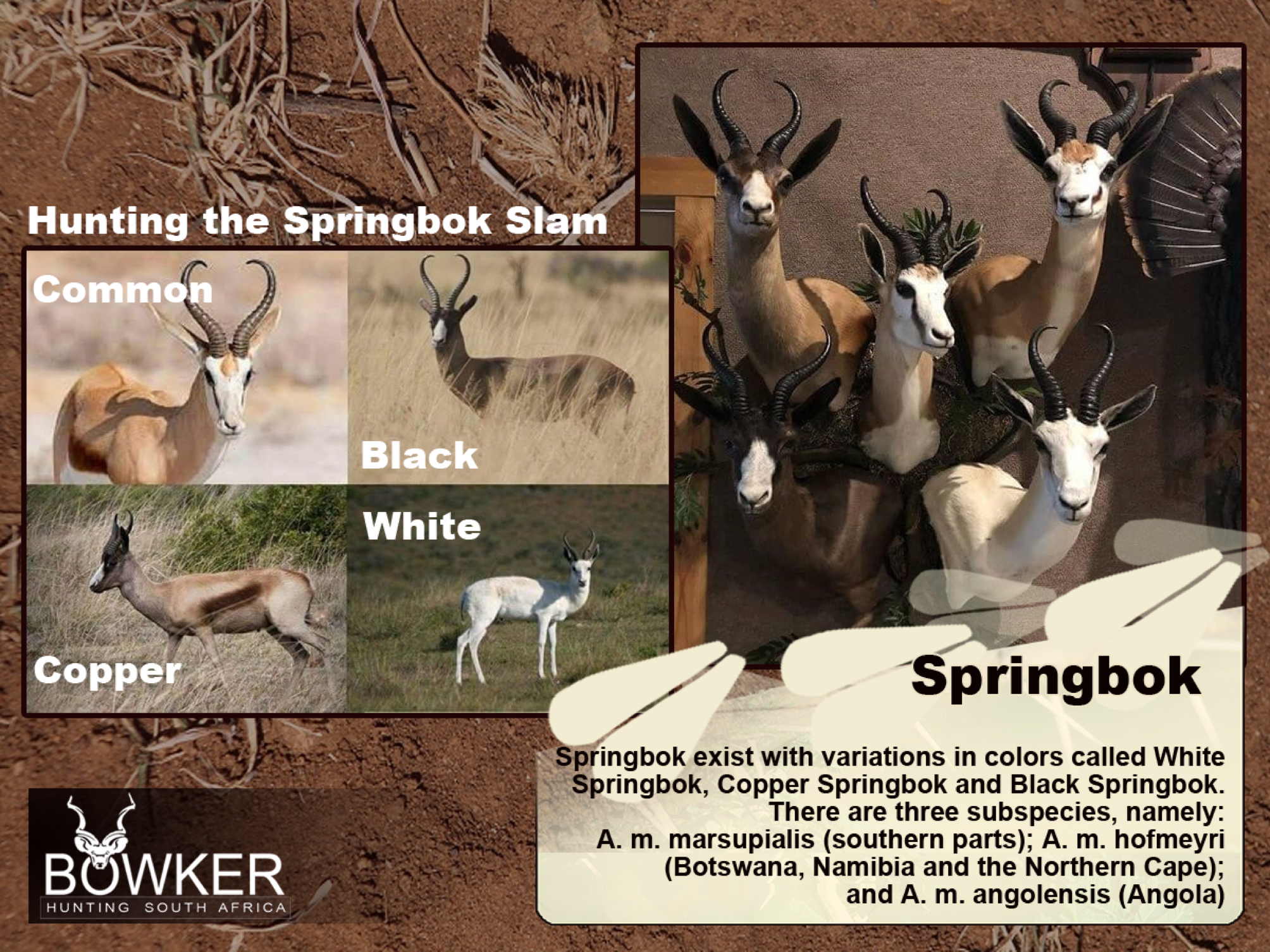 And quite tasty coming off the braai!

PHOENIX PHIL said:
And quite tasty coming off the braai!
Click to expand...