The Mystery Of The Wild Horses From The Namib - Namibia

A story that captivated the people.

The Wild Horses of Namibia
The herd of the Namib Desert Horse probably has several origins, but with a common denominator: in the early twentieth century, before the First World War, the demand for horses declined. The cavalry regiments operating in Southwest Africa had excess stock and the studs that supplied them had excess stock. The solution mutual to both organisations was to turn the horses loose. Not a responsible thing to do, but it’s a practice that still exists today; people shy away from their responsibility and turn unwanted horses loose.

In the Namib it turned into an inspiring tale of survival: the horses, from all the various sources, gradually congregated on the Garub Plain not too far from Luderitz. This is a desert environment and the point about Garub is that it’s where the first manmade waterhole was sunk, to provide water for the steam trains running on the Luderitz line. Most of the wild game in the Namib is desert-adapted and can go long periods without drinking, not so for horses. The horses must have sensed or smelt the water and made their way to it, thus gradually forming a herd.

In 1991 the first aerial census was carried out and identified 276 individual horses. The following year there was a drought which lasted almost 2 years and devastated the herd. This year (2016) numbers have recovered and just topped 150 individuals.

Namib Desert Horse herd origins
There are three probable sources of the Namib herd. A significant source is probably German nobleman, Baron Hans-Heinrich von Wolf who lived at Duwisib Castle. He had a stud of 300 and it appears that after WW 1 there was no-one to look after them and they went feral (The baron was killed in action in 1916). At a similar time the South African Expeditionary Force that had taken control of the Lüderitz- Keetmanshoop line during the First World War appears to have had more horses than they required. An astonishing 15,000 horses were shipped from Germany to Namibia in 1904. And the third source is a ship wreck: a cargo of thoroughbreds was en route from the UK to Australia and was wrecked near the mouth of the Orange River. Horses are strong swimmers and it’s not beyond imagination to conject that some of them swam ashore and joined the herd. Genetic tests have been performed, but none so far has proved conclusive. 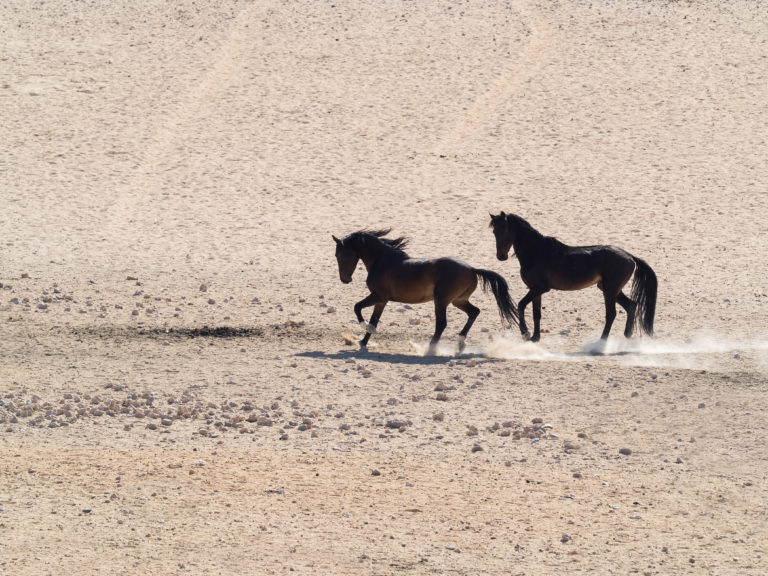 There have been several population studies in recent years which have revealed fascinating facts about their group dynamics and remarkable ability to survive and thrive in a desert. Dr Telané Greyling, who will be joining the BHS ride in April 2017, has lived and worked in Namibia for many years and is an authority on the Wild Horses of the Namib. The Namib-Naukluft National Park authorities have now assumed responsibility for the herd and their future looks assured.

There have been several theories proposed over the years as to the origin of the wild horses. The two most likely stem from the period between 1915 and 1925. During World War One, Union of South Africa troops were stationed at Garub. Reports from the time make reference to 10 000 soldiers with 6 000 horses who pitched camp on the dusty expanse at the edge of the Namib Desert. They relied on the water from the borehole that was used to replenish locomotives at the nearby railway line and supplement the water for the town of Lüderitz.

The German forces had set up a stronghold in the hills at Aus, 25km to the east. The base comprised a series of entrenchments, supply routes, a radio mast and housed two planes, which bombed the Union camp intermittently. The last attack was on the 27 March 1915 to mask the Germans’ retreat, scattering the Union horses. 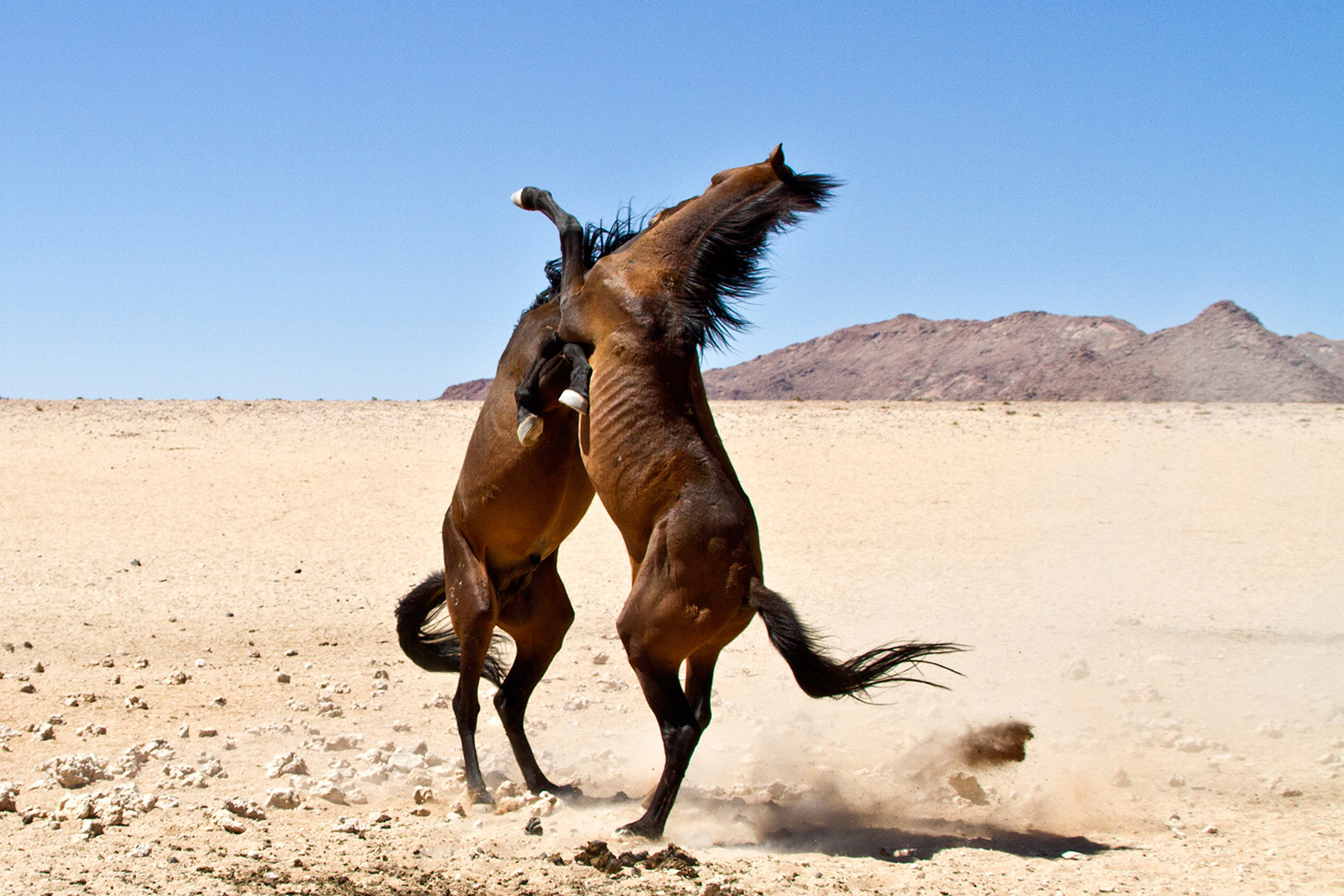 ‘In the morning of 27 March the indefatigable pilot officer Fiedler flew to Garub and caused great bewilderment by successfully dropping bombs onto the enemy camp and among about 1700 grazing cavalry horses.’

It is thought that the Union forces might not have had sufficient time to catch all the dispersed animals before advancing on the retreating Germans, although some soldiers would have remained at the camp after the troops moved off.

Another more probable theory appears to be the missing puzzle piece as to the origin of the horses that formed the core of the wild horse population. Emil Kreplin, who was the mayor of Lüderitz from 1909 to 1914, had a stud farm at Kubub, south of Aus. Here, Kreplin bred workhorses for the mines and racehorses for the flourishing town of Lüderitz that had boomed in the diamond rush sparked in 1908. In photographic evidence of the Kubub stud horses, unearthed by hobby-historian Walter Rusch, there are remarkable similarities in conformation and characteristic markings between the Kubub horses and the present-day wild horses showing traces of Hackney, Trakehner and Shagya Arab breeds.

Kreplin was interred in the Union of South Africa during the hostilities and later lost his fortune in the depression years in Europe. It is assumed that during or after the war the horses, ownerless and not contained by fences, would have begun to scatter, leaving the overgrazed Kubub area in search of better grazing and following the scattered rainfall. They would have eventually made their way to the permanent water source at Garub, becoming wilder over time and linking up with any remaining Union horses and any other abandoned horses in the area.

‘Namibs’ as a breed in their own right

Substantiated biologically and historically, the theories can thus be brought together. Any horses that were abandoned in the turmoil of war would also have gathered in the area around Aus, finding water at the springs after the rains and at the Garub borehole.

The horses lived in the protected Sperrgebiet diamond area, which provided safety from hunters and horse capturers. From as early 1908 the German colonial administration had established a restricted area, which extended about 100km inland, and was strictly controlled. Garub and surrounds were part of Sperrgebiet II. Nobody was allowed access to the area, with the only exception made periodically from the 1950s until 1983 in times of serious drought to provide emergency grazing for farmers.

Garub’s borehole was maintained by the South African Railway (SAR) for their steam locomotives until the 1960s when diesel replaced steam. Afterwards water was pumped for the railway workers who maintained the track and their animals. From 1977 Consolidated Diamond Mines (CDM) maintained the drinking trough and covered the cost to ensure that the horses were kept watered.

In 1986, that section of Sperrgebiet II was incorporated into the Namib Naukluft Park.

For 100 years the horses were able to develop in almost complete isolation, generation by generation, through seasons of drought and abundance, becoming a pure breed through decades of natural selection. They are now regarded as a breed in their own right, the ‘Namibs’.

Interesting article. Other than the need of some groceries for the two studs and those at the watering hole, they are fit, good looking horses from some obviously good stock.
The bravest are surely those who have the clearest vision of what is before them, glory and danger alike, and yet notwithstanding, go out to meet it.”
-Thucydides
Tolerance is the virtue of a man without convictions.

Feral horses are a problem and compete with native wildlife for scarce feed, emotions run wild when it concerns a horse!
Bowhunter addict
You must log in or register to reply here.

Crushed By A Horse In British Columbia

The King of the Kalahari