The hunt was over. A 30-inch Bongo was in the salt. No more stress on us. We still had 4 days left of a 14-day hunt in the Lebeki area of Cameroon. Over dinner, we decided that we would use the remaining days to cover the area that we missed during the hunt.

Not so early, the next morning found us wandering through the densest forest that I have ever seen. The Pygmies led us on a quest to find a so-called (magic lake.) We were so tired from walking bent over or crawling that when we came upon a small stream, we decided to walk in it, as there were fewer roots, saplings and vines in it.

After a lifetime, we arrived at the lake. It really was magic. Mist still hung over it and it was very quiet. The Pygmies sat down in a circle and was silent. We did not need an invitation to fall down and recover. That is why they are only 3-4 feet tall and not 6ft+ as we were. This magic lake was the size of halve a rugby field and the forest came right to the edge. Water grass and lilies was visible in a few places. We were silently looking at this dreamlike wonder of nature when ripples appeared on the surface and came our way.

All the Pygmies lay down and we did the same, wondering what is happening. 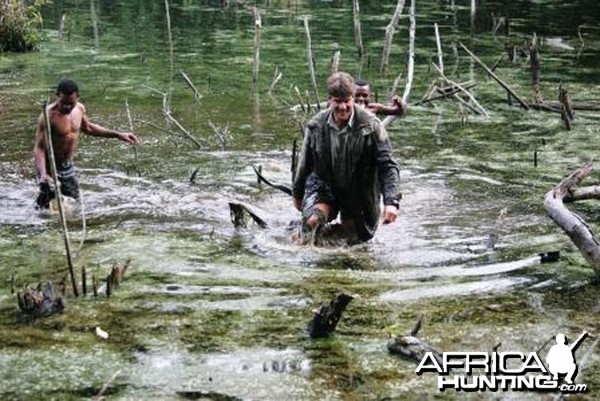 Dauw, our chief tracker came over to me and whispered (Tunga-tunga). I did not know what he was trying to tell me, until he pointed to something coming out of the mist over the water. I blinked and stared. The biggest male Forest Sitatunga that I ever dreamed of was feeding in the lake. He submerged completely and came up a few feet closer with a mouth full of water grass.

This could not be possible. Yawan had his 90lb. Hoyt Viper with 700gr. custom carbon arrows tipped by 210gr Steelforce broad heads ready. We had to move a few meters to get to an opening where he could shoot. Every time the Sitatunga stuck his head under the water, we moved as fast as we could. This was not as easy as it sounds. The tunga came closer still. He was also facing us and more than half his body was under the water.

?3 yards at the base of the neck. Was all I said to Yawan as the Tunga went under again. He was at full draw when the æœagic antelope came up at 20 meters and the arrow flew. He went under in a flash and slowly the water turned red. I saw the arrow disappear completely just before he dived and new that he was dead. After 2 or 3 minutes he surfaced and I recovered him. Never before have I seen such beauty. The lake, mist, forest and the Sitatunga made the perfect moment. It was magic. 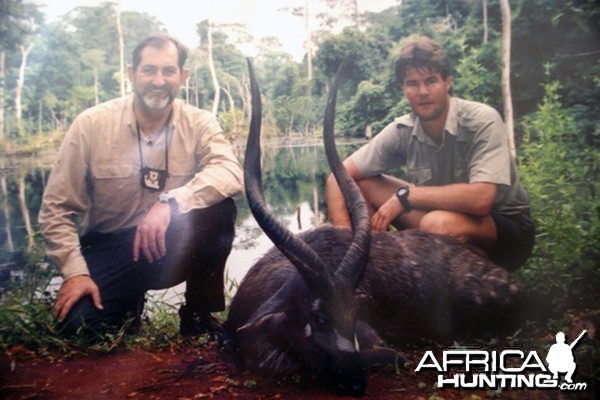 A record book Bongo, and the unofficial, new world no. 1 Forest Sitatunga with 28 1\4 inch horns made this the best safari any PH or client could hope for.

Back in camp, I was deeply moved by the outcome of the safari. This was a fairy tale. The (Magic Antelope) as the Pygmies call it, is just that, and we were part of its magic.

Fritz Rabe
Askari Adventures
Last edited by a moderator: Dec 1, 2016
You must log in or register to reply here.