The kudu with its magnificent spiralled horns is one of Africa’s most gracious and handsome antelope. It is the only indigenous antelope at present enlarging its distribution naturally. Wildlife ranching and the private sector also have generally had a positive effect on this species, as it has been widely reintroduced onto private properties within its natural distribution.

The common name kudu is derived from the indigenous Khoikhoi language of Southern Africa. The scientific name is derived from Greek: Tragos denotes a he-goat and elaphos a deer; Strephis means ‘twisting’ and Keras means ‘horn.

Greater kudu may be distinguished from a similar species, the lesser kudu (Tragelaphus imberbis), by the presence of a throat mane. 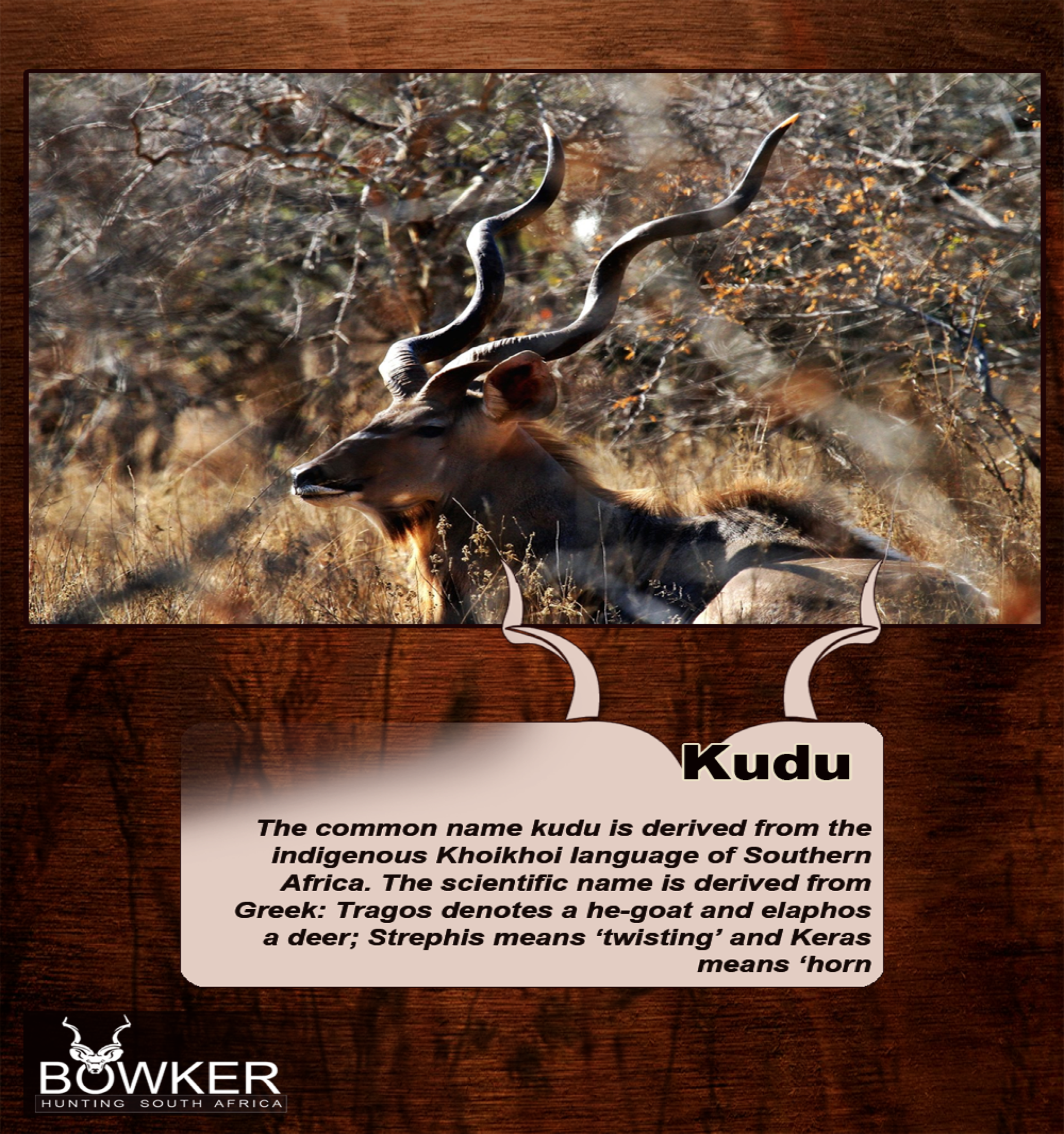 The Great kudu is a large antelope with tawny colouring and thin, white, sparse vertical stripes. Greater kudu may be distinguished from a similar species, the lesser kudu (Tragelaphus imberbis), by the presence of a throat mane. The male has long black twisted horns. Females do not have horns 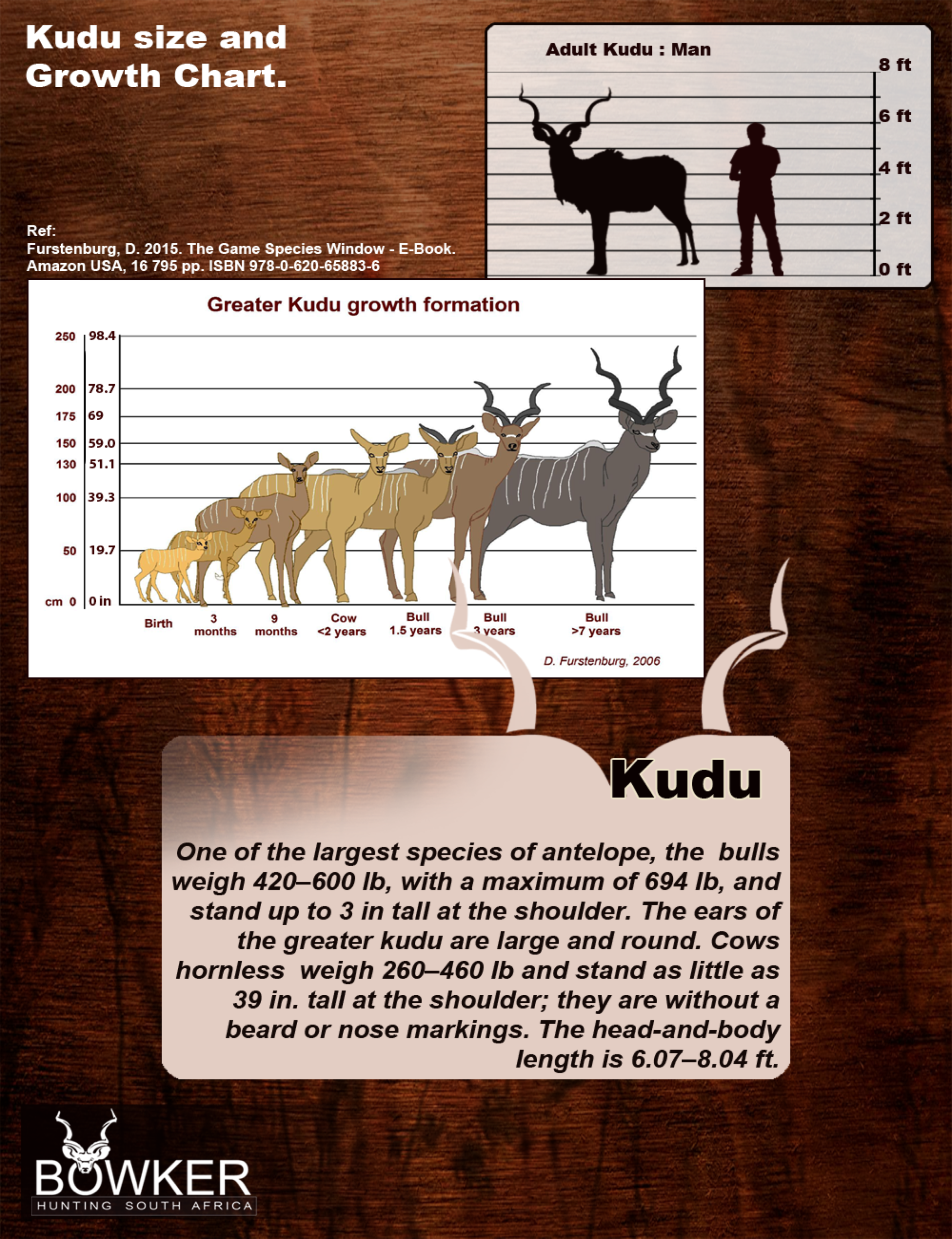 Greater kudus are found extensively throughout Southern Africa, in South Africa, Botswana, Zimbabwe, Namibia, Mozambique and Zambia and even further north in Tanzania, Kenya and parts of Angola. 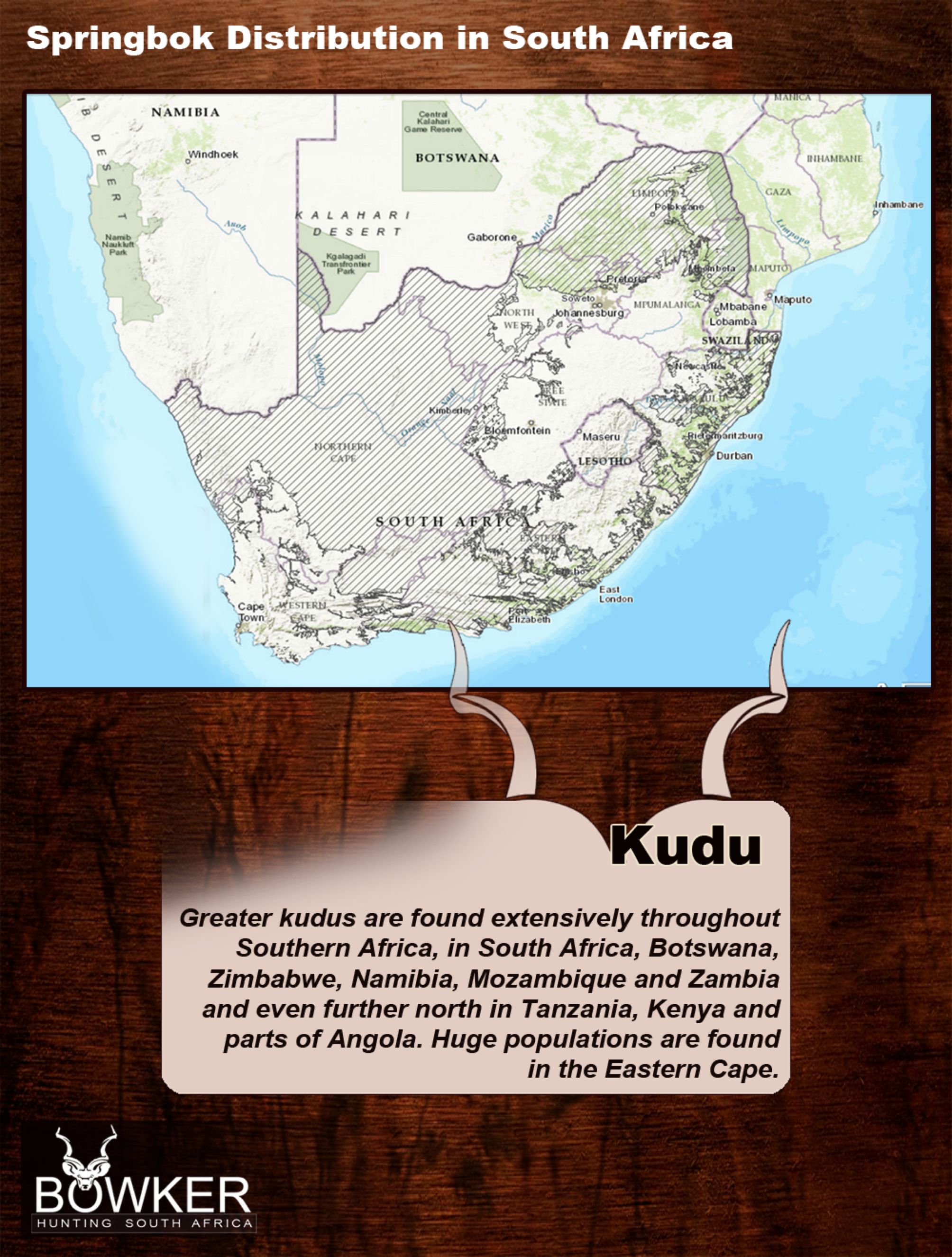 Kudu are highly alert and notoriously hard to approach. When they detect danger – often using their large, radar-like ears – they give a hoarse alarm bark, then flee with a distinctive, rocking-horse running motion, the male laying back his horns to avoid overhead obstructions.

Their cryptic colouring and markings protect kudus by camouflaging them. If alarmed, they usually stand still and are very difficult to spot. 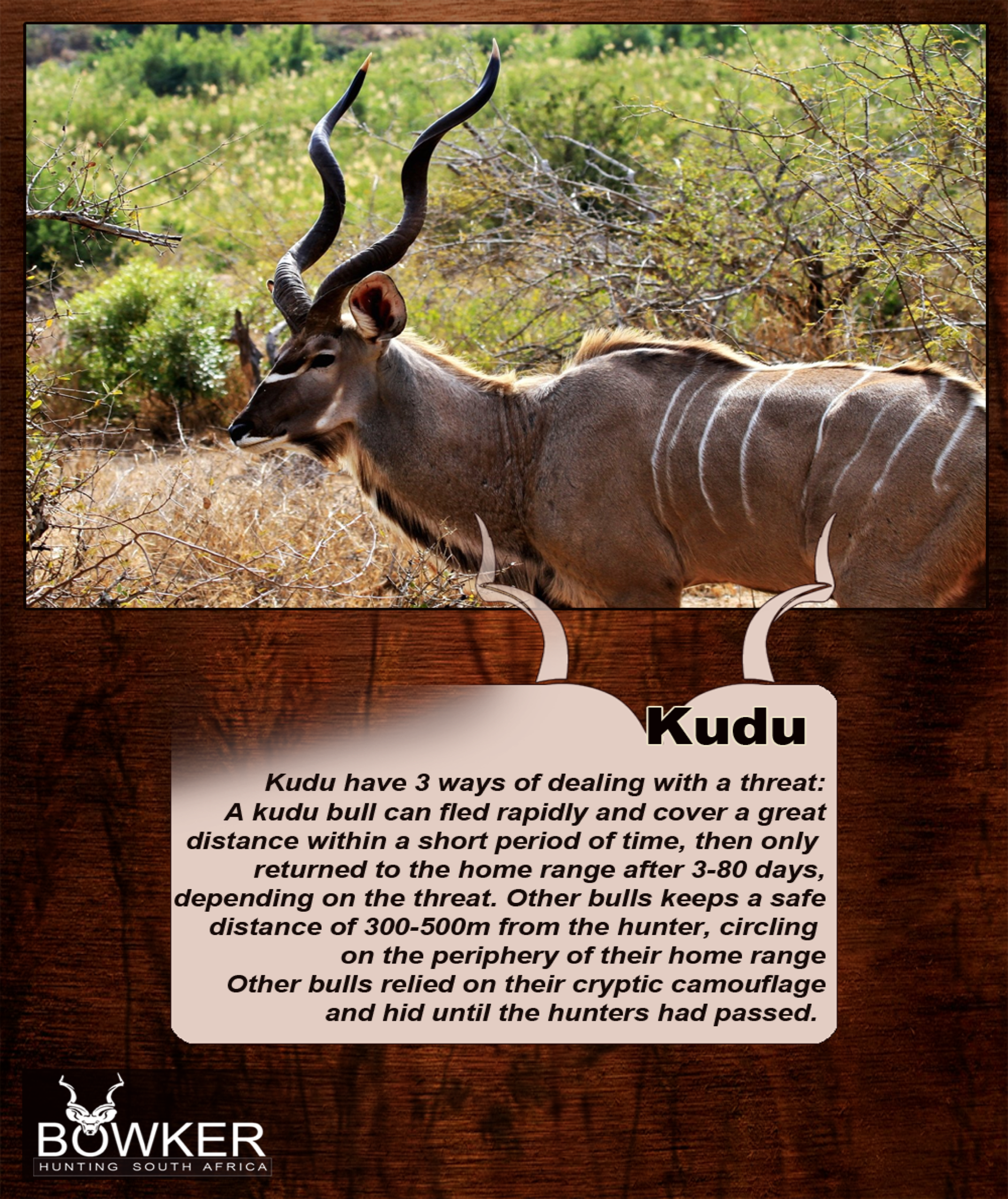 They can be found in a very wide habitat range including hilly areas, slopes of mountains with trees, woodlands, bush thickets, riverine areas, bushveld and wooded savannah areas.The mean home range size is 90-350 ha during wet summer periods and may expand to 600ha during droughts. Predators, such as lions and leopards, African wild dogs, hyenas, and sometimes pythons, hunt kudu and their young. 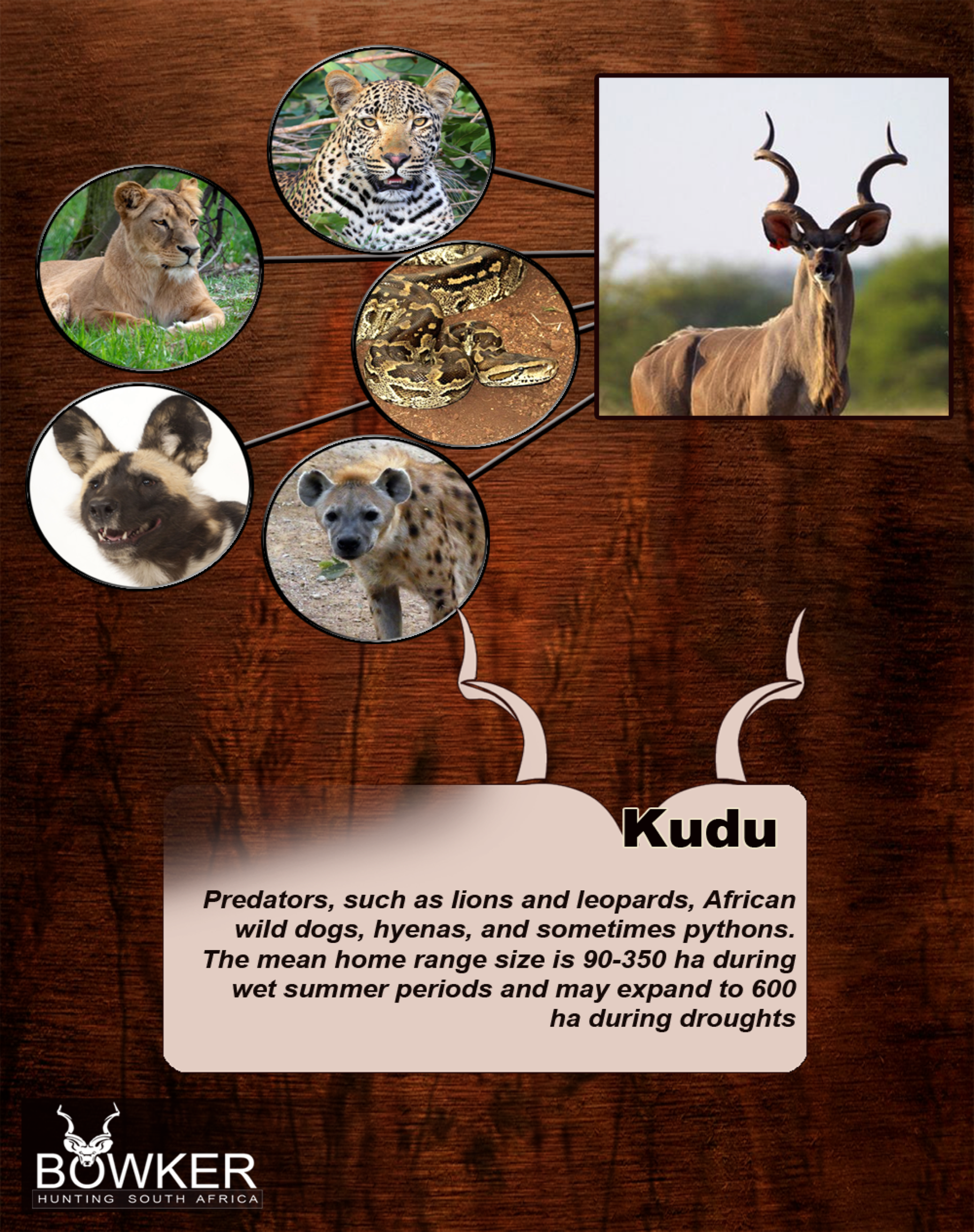 Like many other antelopes, male kudu can be found in bachelor groups, but they are more likely to be solitary. Their dominance displays tend not to last long and are generally fairly peaceful, consisting of one male making himself look big by making his hair stand on end. Males are seen with females only in the mating season, when they join in groups of 5–15 kudu, including offspring. A pregnant female will leave the herd to give birth to a single offspring. She will leave the newborn lying hidden for 4–5 weeks while coming back only to nurse it. 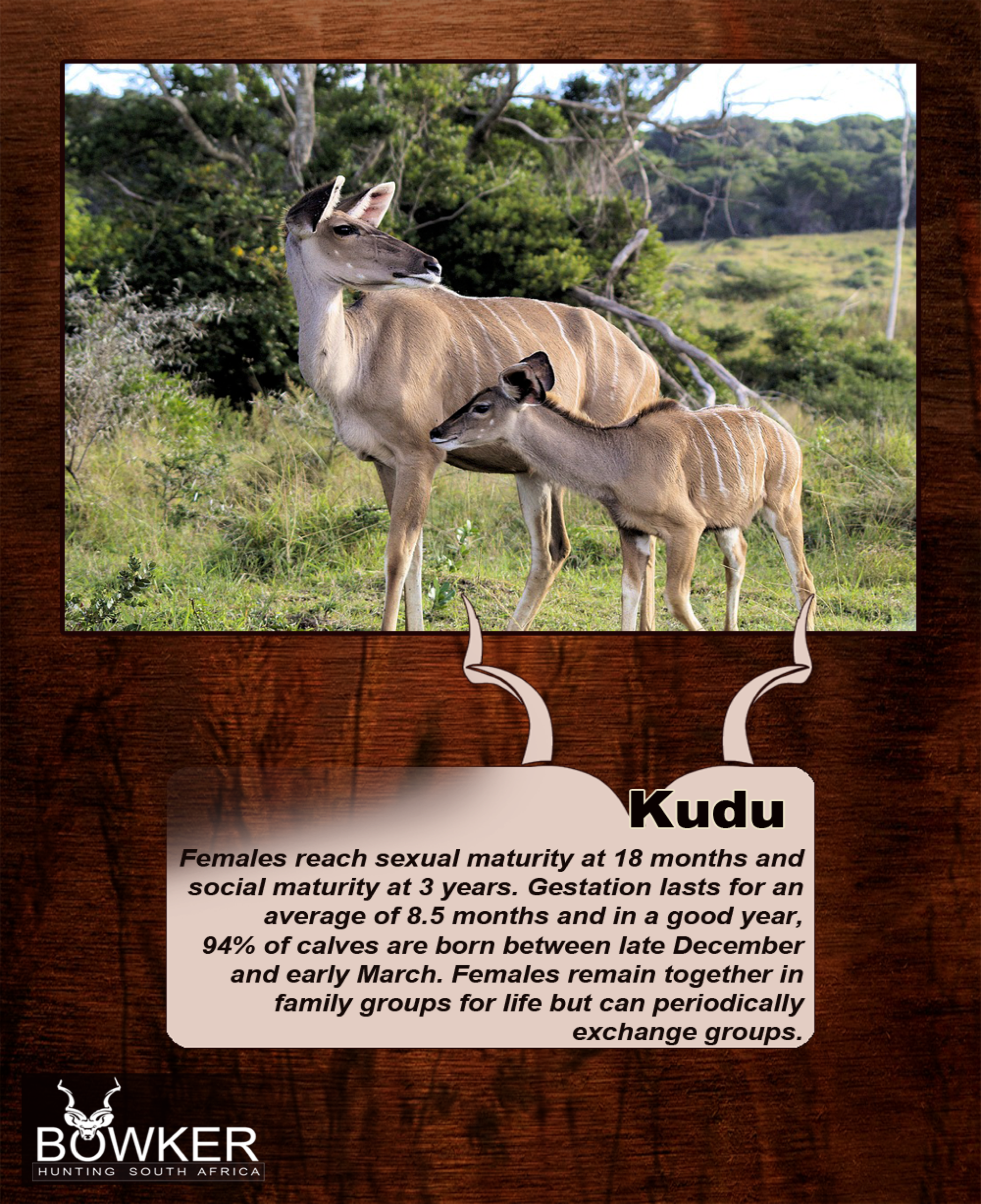 Herds of over 20 usually split up into smaller groups. Young cows remain with their mothers' unit, but young bulls form bachelor groups when they reach sexual maturity, normally at two years. Adult Bulls that have won the right to mate will join herds of females and their young in mating season, but favour other habitats out of the mating season. No territorial spacing exists amongst bulls, but they do show age and hence size-graded dominance hierarchies. 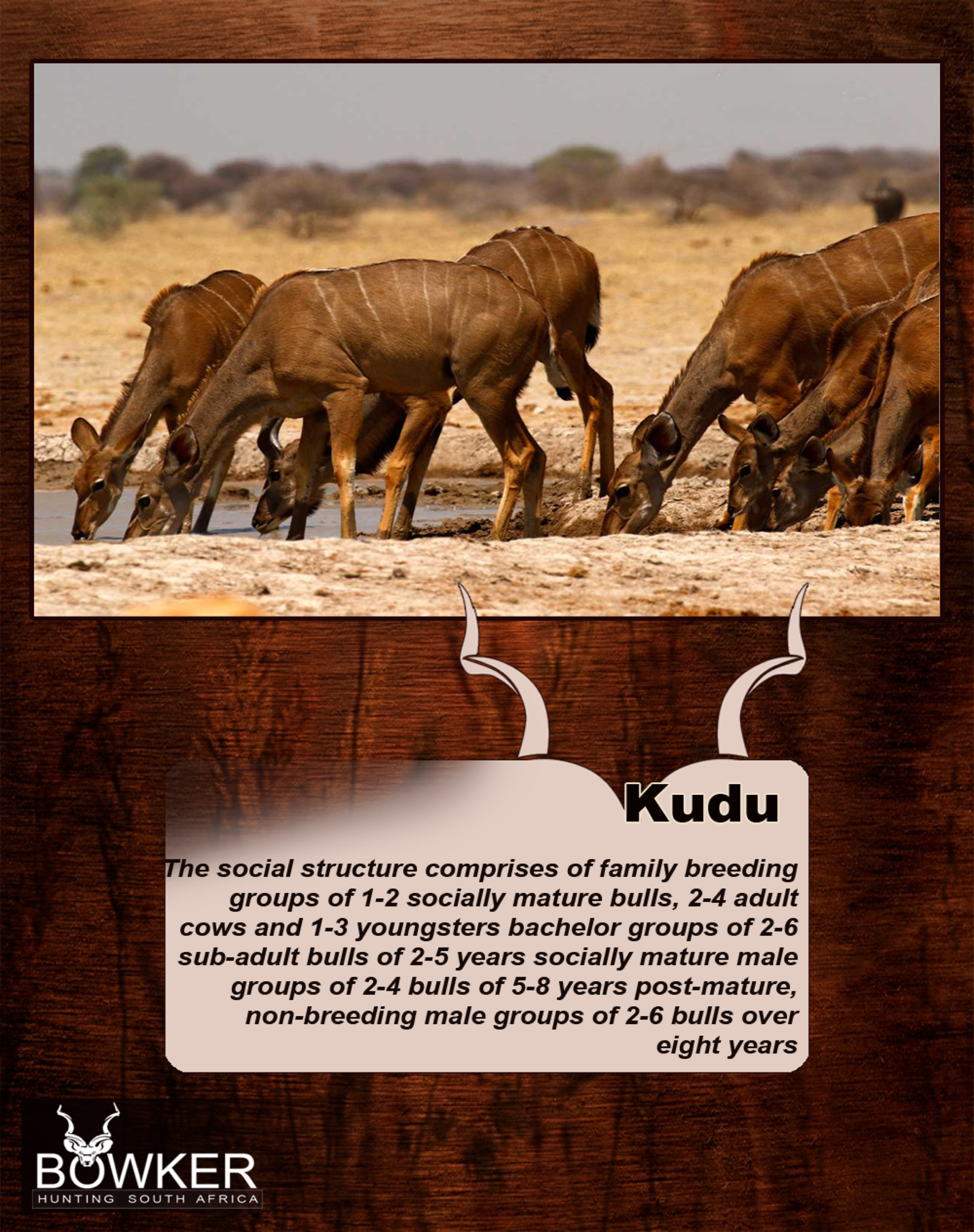 Some of the best kudu hunting methods include stalking their feeding areas early in the morning, or ambushing the bulls as they return from cover and on higher grounds. You can lie in wait at watering holes at midday, still-hunting in thick cover, or tracking. Avoid hunting kudu with . 270 or lower calibre rifles.

If you're after a good kudu trophy, you will want to avoid head and neck shots. Instead, go for the high heart or lung shot. 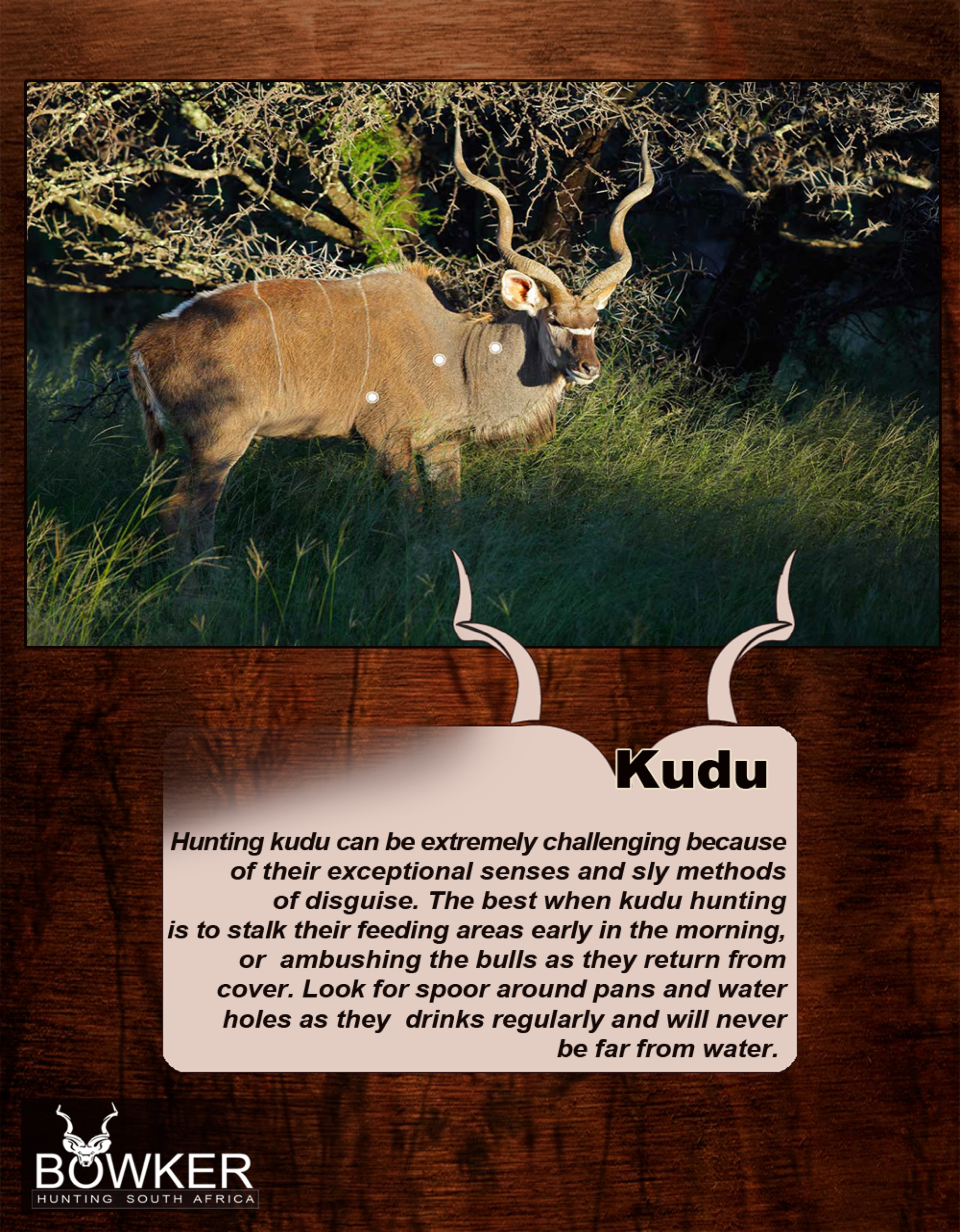 Horn lengths in the low 50's are fairly common; 55 inches and over can be considered a really good trophy; and 60 inches and over is exceptional. The Eastern Cape Kudu is considered a subspecies of the greater kudu and horns length will be around 5 - 10 inches less than its northern cousin and darker in color. 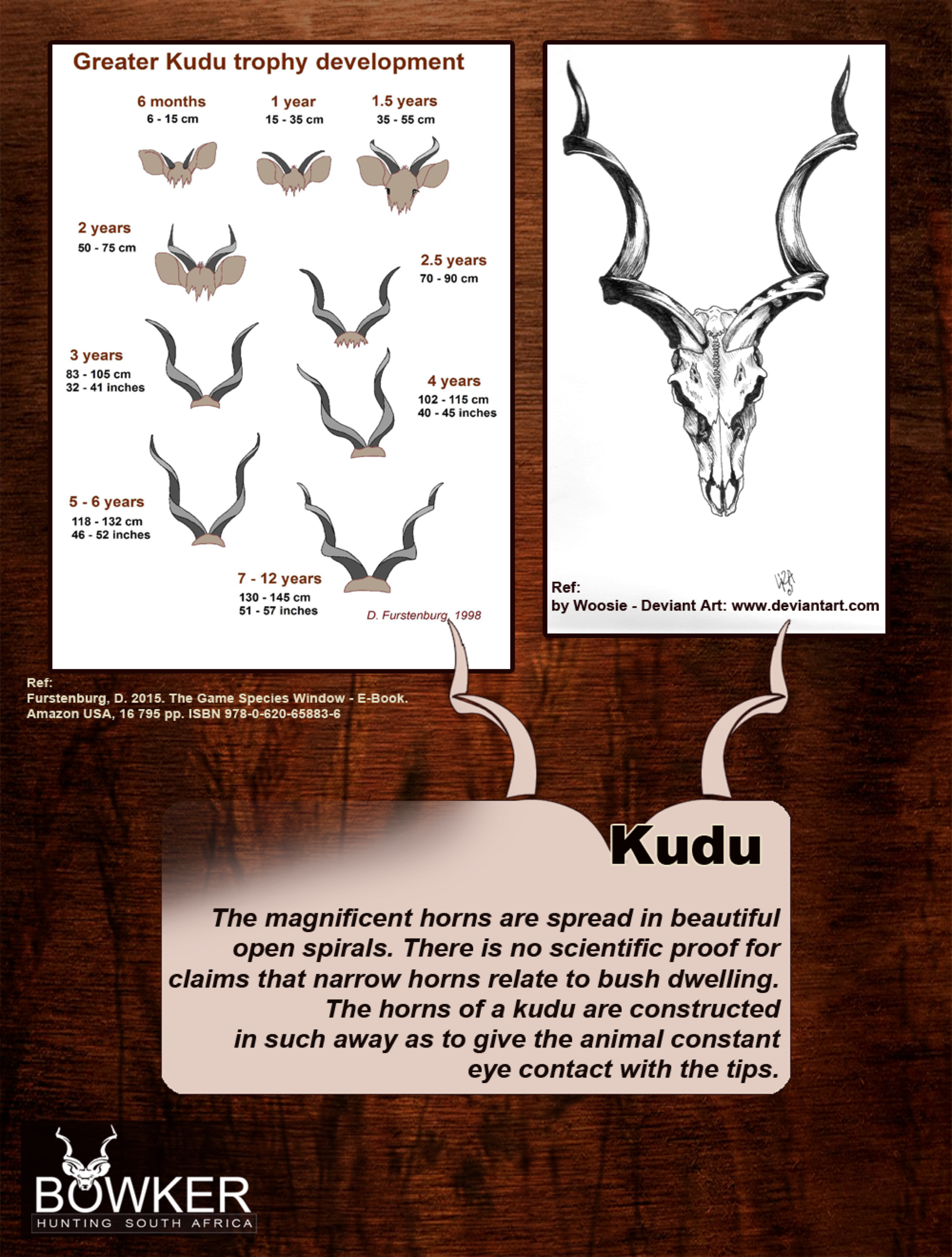 The magnificent horns are spread in beautiful open spirals. There is no scientific proof for claims that narrow horns relate to bush dwelling and wide horns to plains kudu, as the two forms are found in both habitats. However, narrow-horned kudu are more mobile in thickets and are seen moving more frequently in thicker vegetation, whereas a wide horned kudu tends to conceal itself rather than to move. The horns of a kudu are constructed in such away as to give the animal constant eye contact with the tips 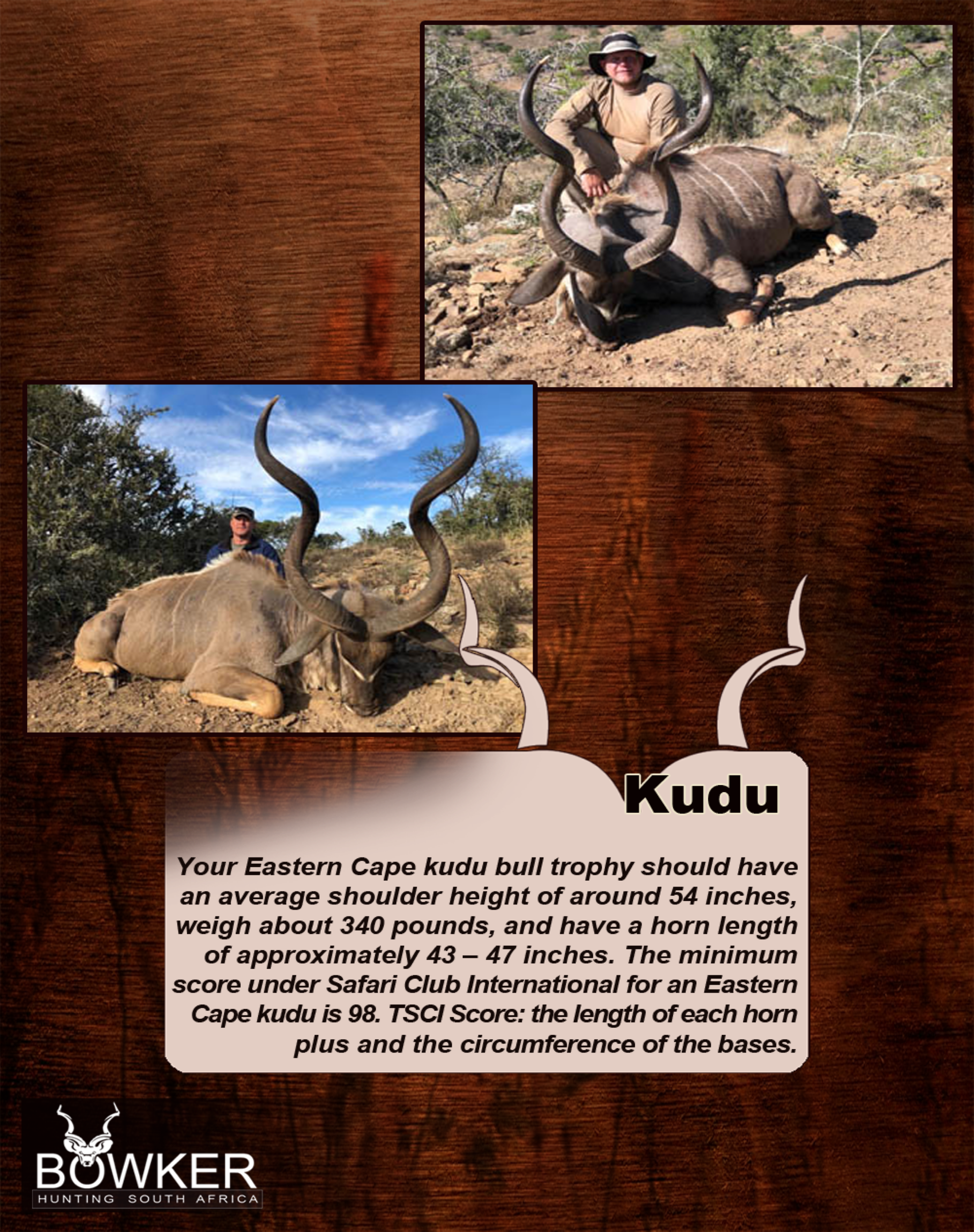 Great presentation, of Aficas one of most iconic animals!

@anyone knowledgeable, in the description it mentions that eastern cape kudu are a smaller subspecies of greater kudu. Can anyone elaborate on this?

I’m supposed to go hunting in June in eastern cape, and kudu was on the hit list, I’m now doubting perhaps...

For sure you should have a kudu on your list. The Eastern Cape kudu horns are on average a little smaller but darker in color and in that respect sometimes more impressive than its northern cousin.

Have a look here for Kudu trophies from the eastern cape which should set your mind at ease. 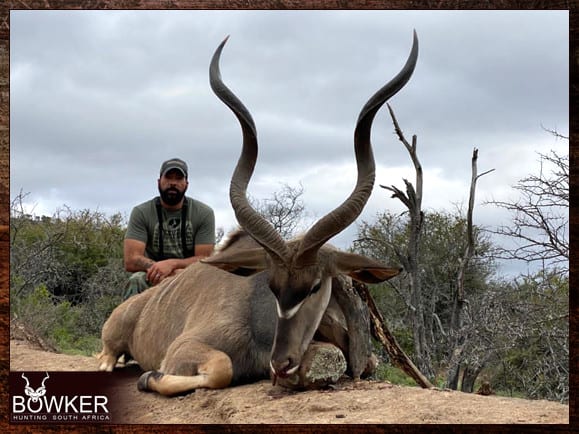 Kudu Hunting | A Truly Magnificent Trophy for Any Hunter.

Kudu Hunting is nearly always the first trophy for a Hunting safari in Africa. A truly magnificent animal and a difficult hunt at any time.