https://www.range365.com/double-barrel-bolt-action-rifle
The Double-Barrel, Bolt Action Rifle
The motivation for the man who designed it? Being charged by three elephants simultaneously.

The motivation for the man who designed it? Being charged by three elephants simultaneously.

High-powered, double-barreled rifles have been the choice of dangerous game hunters for ages, for some very simple reasons: they’re easy to maintain and operate, are very reliable, and they’re able to be chambered for the kind of elephant-killing caliber loads like .458 Win Mag or .375 H&H, that just don’t work in a semiautomatic. Therein lies the conundrum. By going with a break-action gun, a hunter is limited to two shots before needing to reload. And if you need a third shot while hunting dangerous game, you’re probably in a situation that doesn’t allow for a shell-by-shell reload.

This post from revivaler.com showcases a solution to this problem that you’ve likely never seen before: a double-barrel bolt action rifle.

A company called Fuchs & Szecsei produces several versions of the concept, which was borne from a hunting experience. In 1989 Hungarian Joseph Szecsei was charged by three elephants, according to the post. He survived, and decided that a double rifle or even a good bolt action isn’t enough when the world’s most dangerous is running you down.

He set out to design a rifle with all the advantages of a double rifle, and of a bolt gun with a rapidly accessible magazine. The result was the bolt action double rifle.

But certainly semi-autos could be designed to handle the dangerous game cartridges, and some have been, but they’re complicated. They require a gas system and a fairly clean works to run perfectly—but more importantly, semi-autos are illegal for hunting in many places around the world. 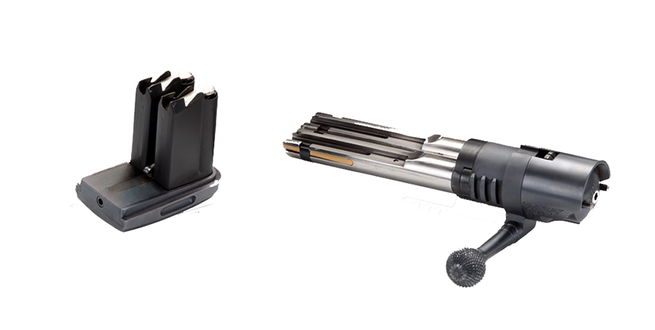 The bolt and double magazine from the company's .17 HMR bolt action double rifle.

The post says that, to keep the weight down on the sizable firearm, the manufacturer made extensive use of titanium in the construction, allowing for a double magazine and a double-sized bolt action while keeping the gun handy and controllable.

The rifle comes in both side by side and over/under configurations and in calibers ranging from .470 Capstick down through the .416 Remington Magnum and .375 Holland & Holland Magnum for African and Asian safaris. Calibers then drop to include the European 9.3 x 62mm, 8 x 68S, and the old standby American .30/06 all the way down to the diminutive .17 HMR rimfire.

Each manipulation of the bolt chambers a round from each stack of the double box magazine. It then shoots like a normal double gun, with a separate trigger for each barrel. Once both barrels are fired, the bolt is opened and pulled back, ejecting the spent casings from both sides of the gun at the same time before two more rounds are chambered.

The smallest double bolt gun is the Hummingbird in .17 HMR, which could be a great small game gun.

Fuchs also makes regular double-barrel rifles, bolt action rifles, and double shotguns. One of their heaviest hitters is the Fuchs King of Africa, a double gun chambered for .577 Nitro Express, which will almost guarantee a stop of just about anything with two 750-grain bullets.

The guns don’t come cheap…actually you have to contact Fuchs just to get a quote, so these are more than just hunting arms, they’re works of art and investments for future generations.

You can see all their models here.

So, what are your thoughts?

A toy for the very rich, this thing must be very clumsy to handle.

If I was going to shoot 3+ rounds of .416 Rigby inside of 10 seconds, I would want a very heavy rifle to help absorb the recoil. And maybe a back brace for afterwards...
https://www.facebook.com/insanebowhunter/
E

Shut up and take my money.
I am a sucker for thing like this...

I believe they would Fuchs you right out of a lot of money!
"Montana seems to be what a small boy would think Texas is like from hearing Texans" John Steinbeck

Do they make one with a bolt handle and front sight that are not obviously designed by a 12 year old pimp?

Looks like a mega - pimped Blaser to me...
"I have taken more out of alcohol than alcohol has taken out of me.” Winston Churchill

Does it come in a three barrel version??????

Relying on Mauser M98,.... but having an ever lasting love affair with Mannlicher-Schoenauers....
R

If the main reason was to have access to three quick shots it seems to me that a 3 barrel drilling might be the better way to go.

tarbe said:
Do they make one with a bolt handle and front sight that are not obviously designed by a 12 year old pimp?

Beat me to it! I shoulda kept reading.
HUNTERS make importation bans work!

tarbe said:
Do they make one with a bolt handle and front sight that are not obviously designed by a 12 year old pimp?

Wait is the pimp been a pimp for 12 years or is the supposed pimp actually 12 years old?

Tom Hawk said:
Wait is the pimp been a pimp for 12 years or is the supposed pimp actually 12 years old?
Click to expand...

But has not had time to develop good taste!

Nyati said:
A toy for the very rich, this thing must be very clumsy to handle.
Click to expand...

The Jam-O-Matic by Blamo… That’s right fellow Sportsmen yes you too can sell a kidney to a Chinese Billionaire and buy a rifle guaranteed to double feed a jam each and every hunt…Hurry and buy today?!

Royal27 said:
Beat me to it! I shoulda kept reading.
Click to expand...

The guns are custom made, so you can get a left handed version if you want
You must log in or register to reply here.