the crew behind tracks across africa

People ,
Thanks for the warm welcome on my first post , glad to be here ..

Many people referenced that they enjoy our TV shows , let me take a moment to just say , they are not at all MY TV shows , I am merely the guy in front of the camera , but behind the camera, behind the editing desk you will find a team of incredibly dedicated artists in their fields ,these are the people who deserve the main credit

Our camera crew deserves the most credit , these guys are supposed to stand still , film steady and make sure that the light , white balance and every other setting on their cameras is perfect as the world in front of them is dissolving into a mixture of dust , snot and lead !!! these men , some of whom I have worked with for close on 20 years are the people who are the real heroes in the field ..

People often ask who our cameramen are ..here they are ..

Andy macdonald in his fourth year with us keen , ambitious and highly competent ?here is nothing andy wont do .. 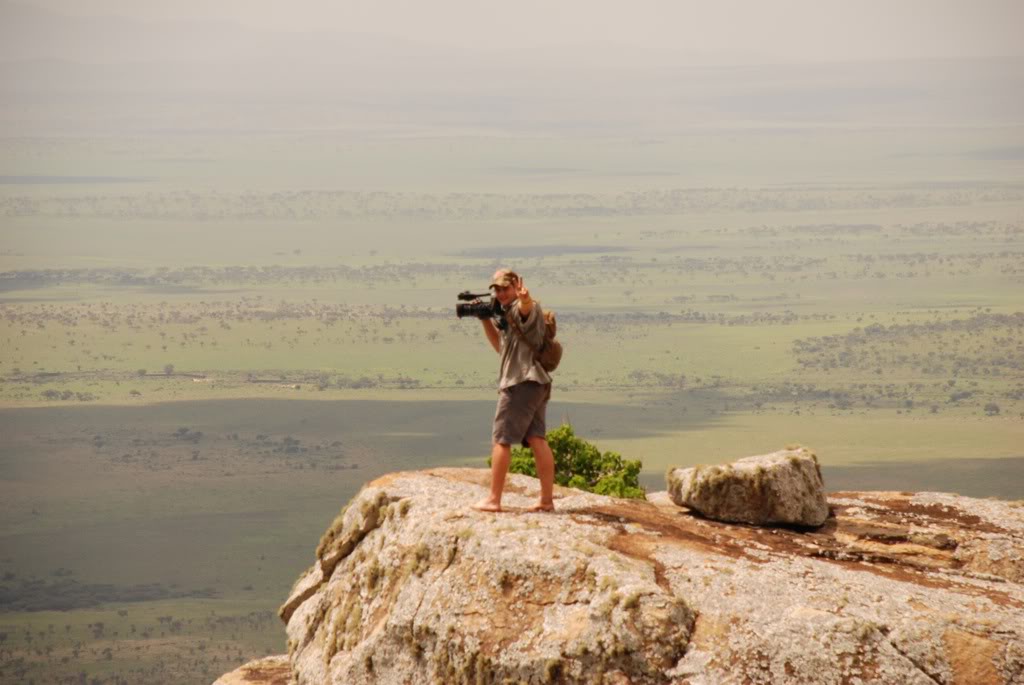 Doug king , going into his 6th year with us doug is one of the most exceptional artists you will ever come across behind the camera , not only does he have an incredible eye , his ability to edit and show the unique angle is amazing 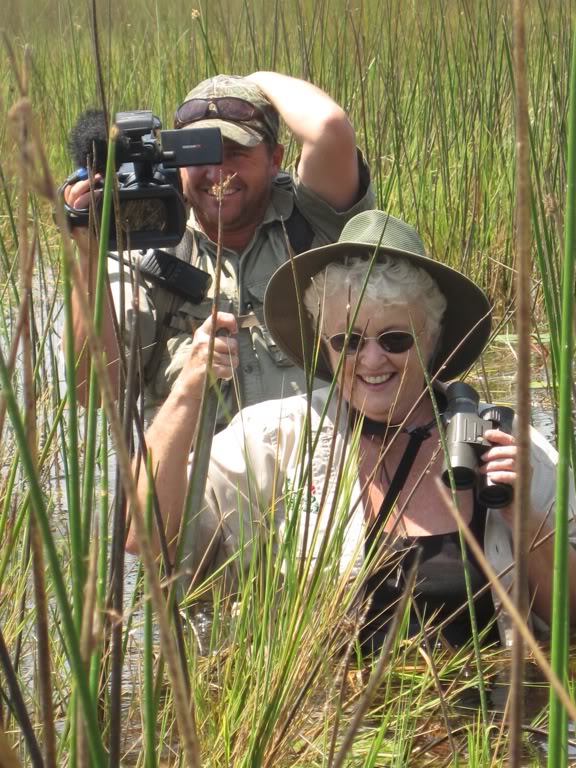 Simon Elton who has worked with me for almost 20 years ! we have faced and done a lot together ,from getting lost in the mountans to diving for crocs uncannily steady in the midst of everything he is a man who you want by your side when you get in a jam 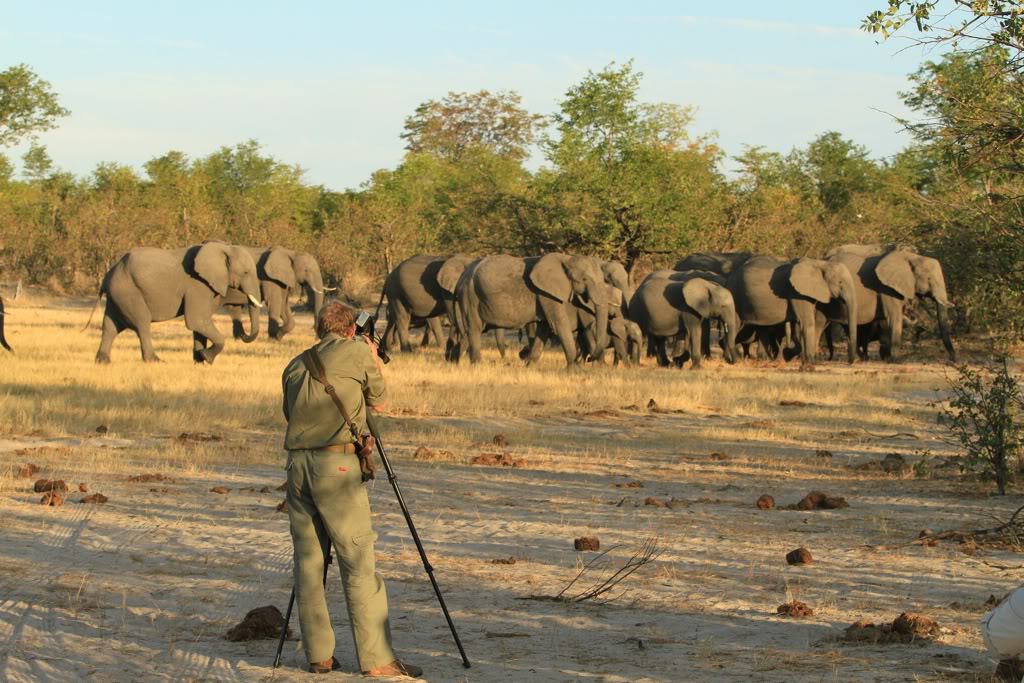 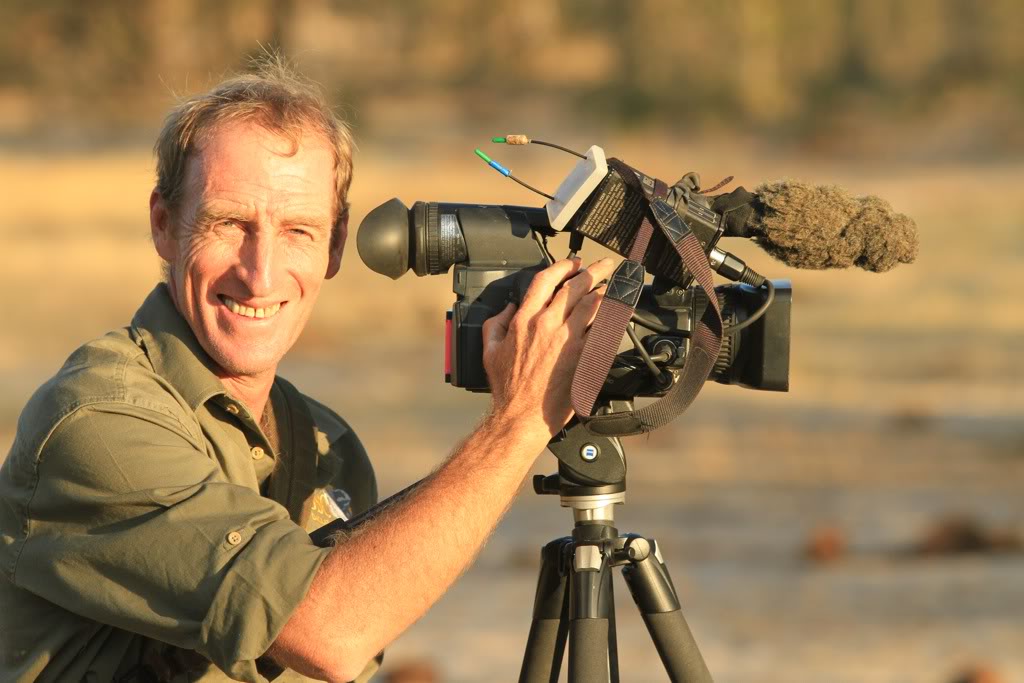 Renz Palermo , just 4 years ago got thrown into the deep end , on his first hunt supposed to be observing only , the lead cameraman twisted his knee and on renz first ever day filming a hunt we had a young cow charge that I had to kill ?t just three yards ?oday he is rock steady and a tremendous asset to the team .. 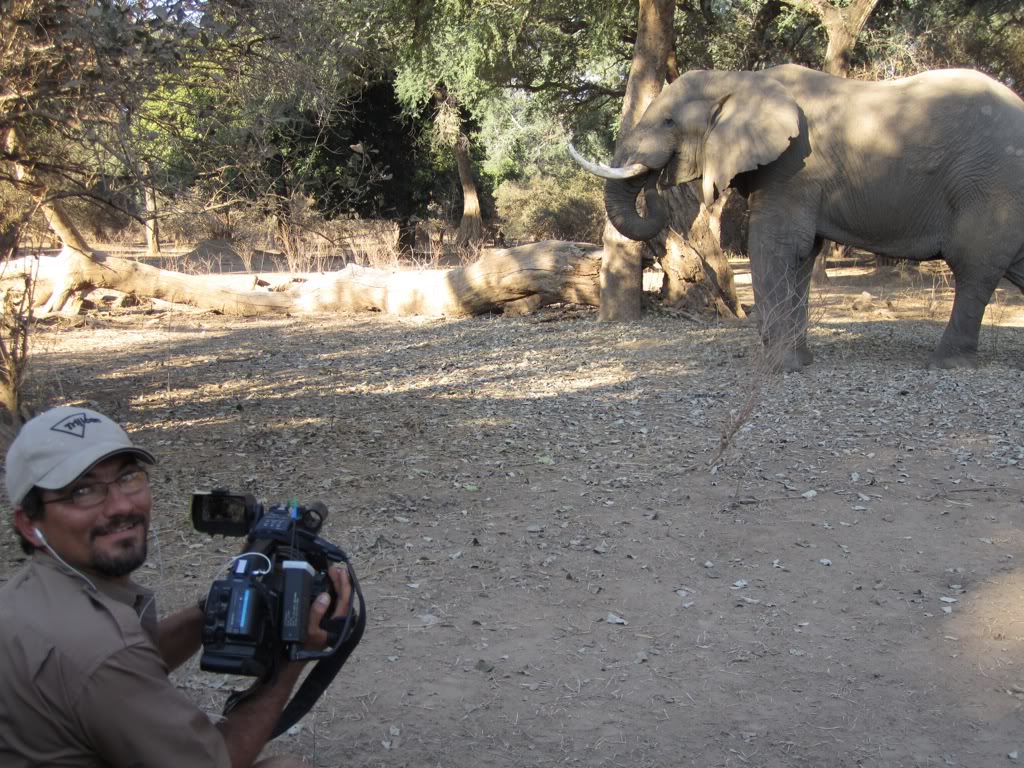 This season we have two new guys on the crew , Ted Miller from the states who is doing a lot of our èœ‰ï½ªorld filming for us as well as some Africa and Doug Greaves , who has been in the industry a while but this is his first season with us ..

Then behind the scenes we have Christy Funke who runs the editing office , what a talented girl she is , and what she can do with a computer is amazing here she is hard at work doing studio stuff with me 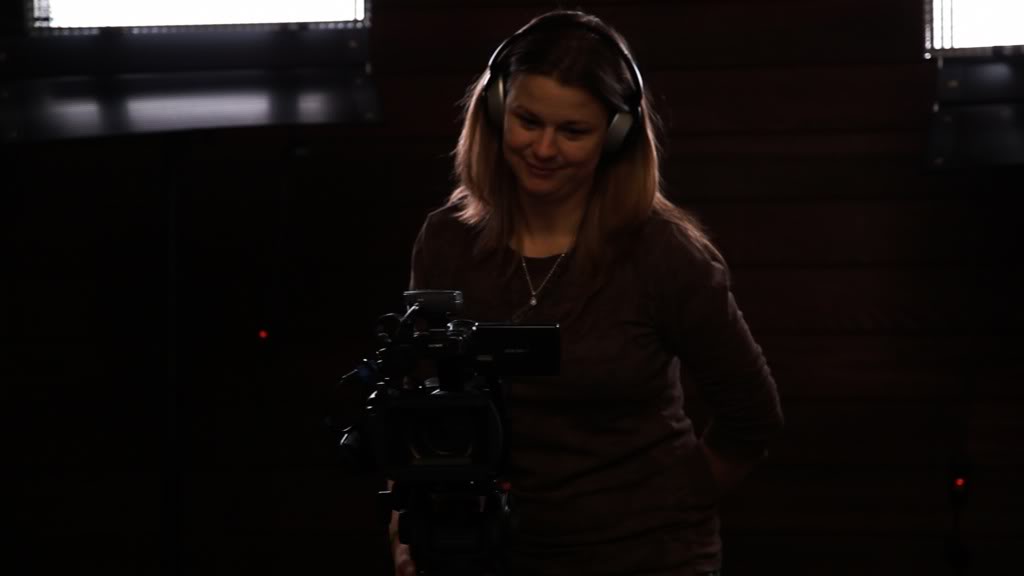 and heres a link to a youtube clip that she put together for the 2012 season of tracks across Africa , I think itsï½´ a great look into what the combined talent of our crew can produce from the intense front line to the artistic to the studio and cutting


Tyler hill , in his past life a combat cameraman in the marine corps edits one of our shows ?ery talented and a guy who has also spent many years in a kind of hunting scenario I hope most of us never get to see !! here he is with an elk that I took in wyoming ... 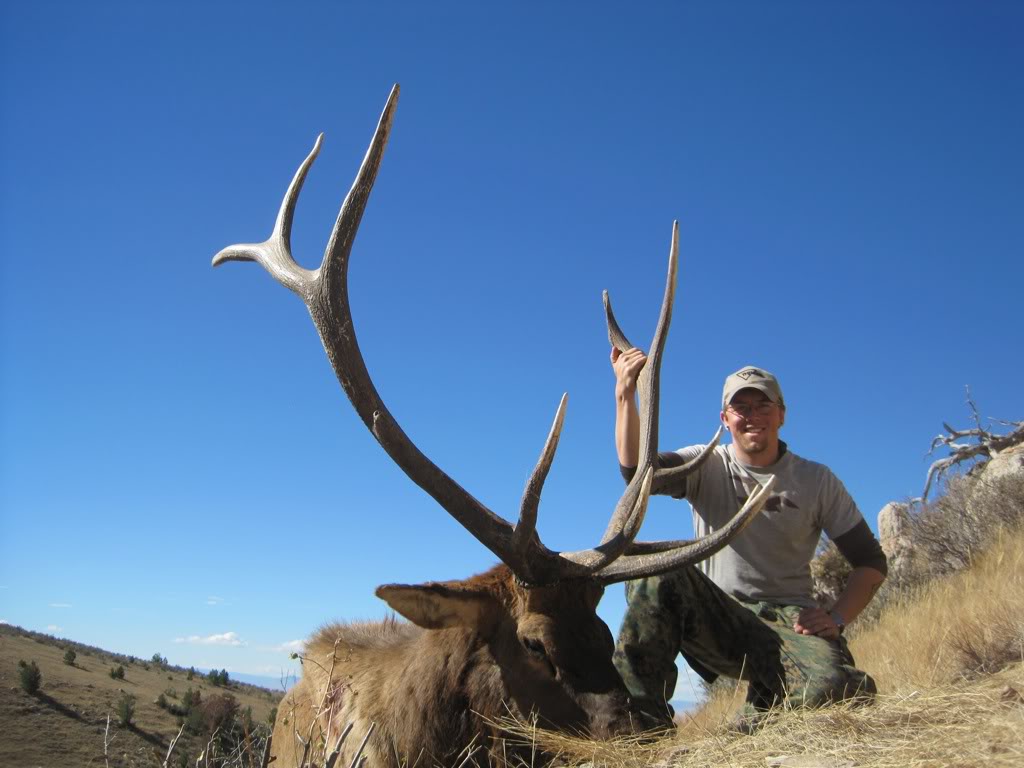 Enjoy people and thanks for the opportunity to introduce our team of incredible people ...

Thanks for the insight into the world behind what we see!
R

Like any business, it would not exist with out the employees. Thanks for sharing with us and the camermen appreciate the exposure too.
"A Dream can be relived, again and again in Africa."

Thanks Ivan, has to be a great crew!
B

Ivan, Thanks for posting these folks names and faces. I've enjoyed the show for years and have always wondered who did that great work. It always takes a team. A good team will always beat a good player. A great team will always be a winner. TAA is a winner and your team is a great team. Please thank them, for me, for the hours of pleasure they have provided.
Bfly

thanks blackfly , without a team indeed we are nought !
B

It's nice that you acknowledge the crew. Tell everyone how much we enjoy the show. The show is sometimes on in the physician's lounge of our operating room. I just hate it when they call me back to the OR right before the shot. Keep 'em coming!
E

+1, Ivan i own a business myself and employees are the backbone and should be recognized.

thank you people , i will be showing the guys (and gal) this thread and they will be very proud i am sure ...thanks for supporting our team ...

Thanks it is the little things that make things fun smoothly...
C

Stuff like this sure takes a good team. Well done Ivan

Absolutely agree with the others Ivan. Teamwork and the climate in which that team performs are the key to everything - back in the day, in my old profession, we called it "command climate." You and your team are putting together a first rate product. I assume many of them likely supported "Beasts of Legend" as well. Truly wish you every sort of continued success in the future.
"We sleep soundly in our beds because rough men stand ready in the night to visit violence on those who would do us harm" American Novelist - W. Churchill

Thanks Ivan for sharing its good to know that the guy in front of the camera appreciates the fantastic team behind the camera. Tell them Thanks for us. Bob
Enjoy Life Now! It has an Expiration Date.

Its funny how I would think the star of the show was the success behind any series 20 years ago. Now I am self employeed and there is nothing that can speak more for a man than the people who stand behind him. Next week I leave for a month long safari in zimbabwe, botswana, and south africa. I have men that are capable of running every single aspect of my business allowing me to enjoy the thing I love to do second most in life (behind being with my family). I pay my men very well and I constantly tell them how much I owe the and appreciate them. I hope that, like my employees, your crew realizes how much they are needed and respected.

As for your crew, thank you so much. I look forward to catching your program on the outdoor channel every single week. Right now all I am seeing are re-runs so please guys get back out there and get me some fresh material. Your program is one of the last true safari shows making my weeks bareable.
C

controlled_feed said:
Stuff like this sure takes a good team. Well done Ivan

TRACKS ACROSS AFRICA NEEDS YOUR VOTE !!
2 3

THE BEST OF "TRACKS ACROSS AFRICA"

What happen to "Tracks across Africa"?

Africa huntings supported people you should never use
7 8 9