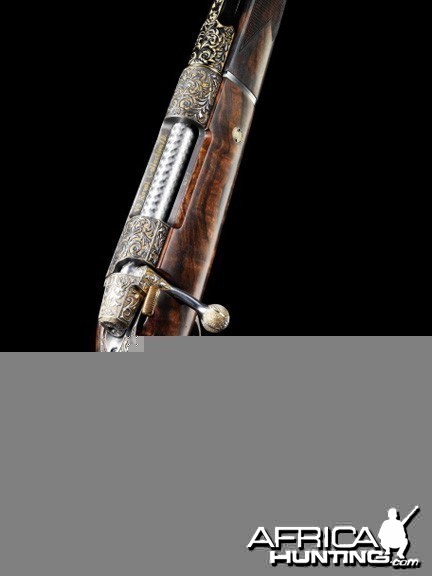 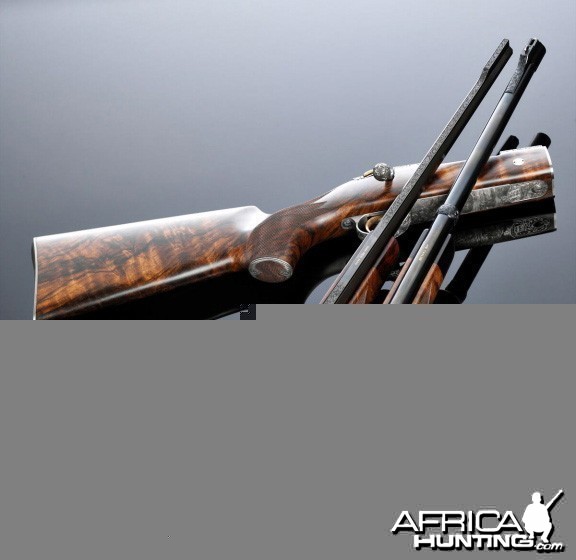 Swedish gun and rifle maker VO Vapen, founded in 1977 by master gunsmith Viggo Olsson, constructs the world's most exclusive handmade hunting rifles. The production of VO rifles is limited to a small number of examples each year. The company holds a royal appointment to H.M. King Carl XVI Gustaf of Sweden, and has recently found great success with ultra-exclusive rifles made for the Middle Eastern market. H.H. Sheikh Mohammed bin Zayed Al Nahyan of Abu Dhabi's Royal Family is another VO enthusiast. 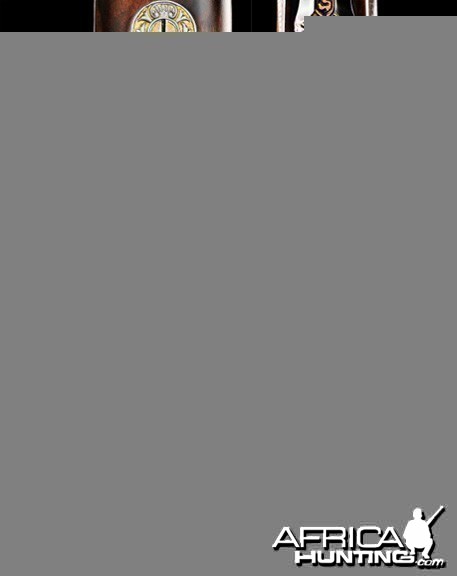 In addition to completely bespoke orders, VO makes several limited edition collections and special editions. The foremost of these is the one-of-a-kind H.H. Sheikh Zayed Bin Sultan Al Nahyan Mosque Rifle, designed as "a tribute to the most magnificent building we have ever seen" in Abu Dhabi and to the man who created it, priced at $825,000. This masterpiece includes a grip cap with engraving, gold inlays and 36 multicolored diamonds mimicking the design of the mosque's amazing chandelier. 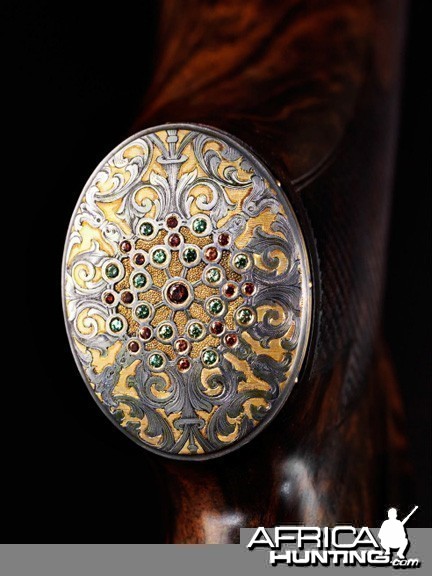 The Royal Collection United Arab Emirates Edition (above), is designed to be nothing short of the world's most exclusive rifles and limited to only 100 pieces. Specific models have been dedicated to members of Abu Dhabi's Royal Family and bear their engraved portraits, and are priced at $525,000. Other collections include the Big Five, designed as a tribute to five big game animals (lion, leopard, buffalo, rhino, elephant) and Ernest Hemingway, "the passionate hunter who brought safari hunt to the public attention," nicknamed the "Big Papa," limited to six pieces at $375,000 each; the Viking Collection, inspired by Viking mythology and featuring engravings of Norse gods and 24-carat gold inlay at $275,000 apiece; and the Royal TD Collection, initially created for H.R.H. Prince Carl Philip Bernadotte of Sweden, at $125,000 each. 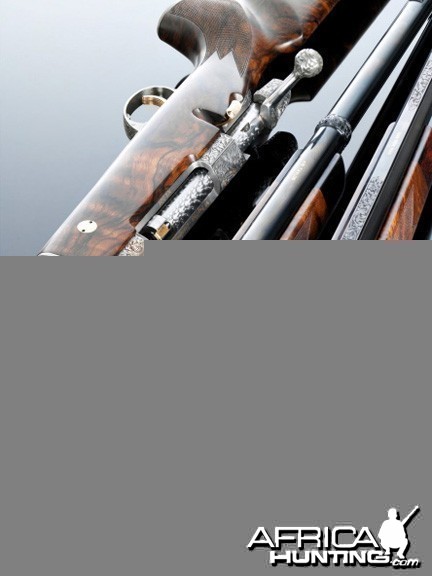 All VO rifles are based on their patented takedown system, allowing the owner to use several different calibers on the same rifle. In addition to precious engraving and inlaying, the stocks are made of the finest European walnut root, hand-selected by Olsson. When the humidity is at the correct level, the roots are washed and the bark is shaved off, then the roots are cut into planks on a homemade saw. Throughout the next three years, the planks must be stored in different facilities where the moisture is gradually drawn out of them. 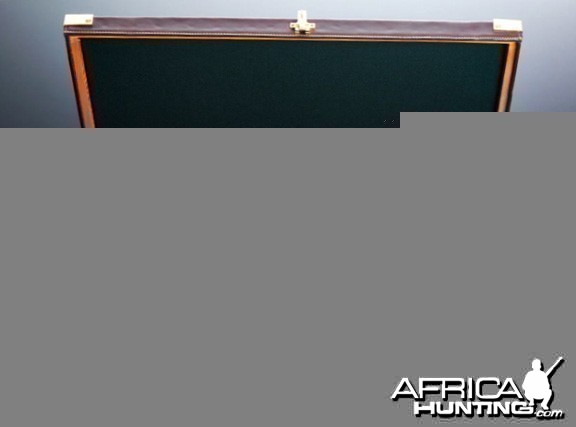 The moisture is checked and when it has the right balance, the plank is cut into one or several stock blocks. Clients can also choose their own walnut root plank and have it tailor made to their own measurements. Next comes the oil treatment of the stock, which takes about five weeks. The result is a silky finish that gives life and depth to the natural beauty of the walnut root. VO reminds us however that, "No matter how beautiful a rifle is, at the end of the day it will always be judged by accuracy. And one thing we can assure you – you can not blame your VO rifle if you do not hit the target. correctly the manufacturer says and I say " ITS NOT THE RIFLE BUT THE MAN BEHIND THE RIFLE.

Thats an amazing piece of craftsmanship monish, do you know what the rifles two chamberings are?

Wow that is quite the craftmanship!!
T

Those are some beautiful rifles! And please tell us what they are chambered in Monish.

Well...........while the craftmanship is obviously superb, I must say that, to me personally, much of the metalwork and engraving goes beyond elegant and falls into the 'tacky' department.

Interesting, I don't see provision for a scope mount yet the 300 winmag barrel has no sights on it.
S

Kiwi505..........well my aging eyes could be failing me, but I believe if you look closely you will see the screw plugs where the action is drilled and taped. They are nicely blended into the engraving, however the slots for the screwdriver are visible I think.

I think that you are right. Interesting, I thought that engraved bases would be provided on such a rifle!
B

Yes, it is definitely has screws on the action for scope mounts, I guess they were waiting for S&B to stick gold leaf all over a scope so it would match the rifle...
I agree with you skyline, even if I had that sort of money to blow on a firearm, I wouldn't want all the 'bling' on it. But I guess that level of ornamental metalwork would appeal to its intended recipient!
B

One born every minute. Then again what would you expect from the guy that commissioned the work. Money aside, its tasteless, like a gold plated Ak-47. Give me one of John Rigby Rifles any day or one of D'Arcy Echol's Legends.

Skyline said:
Well...........while the craftmanship is obviously superb, I must say that, to me personally, much of the metalwork and engraving goes beyond elegant and falls into the 'tacky' department.
Click to expand...

bushmantim said:
. . . even if I had that sort of money to blow on a firearm, I wouldn't want all the 'bling' on it. But I guess that level of ornamental metalwork would appeal to its intended recipient!
Click to expand...

You three gentlemen have summed up my feelings quite well. Although I too agree that the craftsmanship is of a very high quality I view the overall result as pure gaudiness.
There are many degrees of wounded . . . there is only one degree of dead

BH206L3 said:
One born every minute. Then again what would you expect from the guy that commissioned the work. Money aside, its tasteless, like a gold plated Ak-47. Give me one of John Rigby Rifles any day or one of D'Arcy Echol's Legends.
Click to expand...


Oh, I don't know, I have seen much more tastless work!!!

BH206L3 said:
One born every minute. Then again what would you expect from the guy that commissioned the work. Money aside, its tasteless, like a gold plated Ak-47. Give me one of John Rigby Rifles any day or one of D'Arcy Echol's Legends.
Click to expand...

My thoughts as well, especially since VO Vapen rifles are built around Zoli actions.

Well the rifle is destined for Abu Dhabi and having just visited Dubai (next door), it will fit right in. Arab art has always appeared 'garish' compared to European taste.

Last century it was the Indian Maharajas, now it is the UAE sheikhs setting the pace.

I doubt it will ever get fired. Just another bragging piece for the owners inner circle.

Kiwi505 said:
I think that you are right. Interesting, I thought that engraved bases would be provided on such a rifle!
Click to expand...

Kiwi505, I see the screw plugs as well,,, but,,, I might be considered an a$$ for saying this, I doubt this rifle is one that will ever be shot, EVER. It is one of those "impress the Jones' pieces", "Look at what I have". I hope I'm wrong, this is beautiful craftsmanship, with a lot of time put into it.

sorry,but that is not for me !
on the ocean or in the bush.
D

i hunt hard with my rifles and all have “little memories”, dings from things like crossing alaskan rivers still unnamed in the middle of the brooks range chasing griz or caribou. not to mention the rain or snow or any other type or weather that would force me to leave a rifle such as this in the safe. my rifles look like they get used, and i find that a measure of pride. not to discount this kind of high end rifle. it is truly a work of art but for me personally it would never leave the safe except to show the boys when we are swapping stories and sipping outrageously priced but outrageously delicious single malt scotch. my 2 cents...

If I had the money (which I don't) and wanted to spend it on engraving etc. I'd go for Peter Hofer guns. Much more elegant in my opinion and everything is done in house. 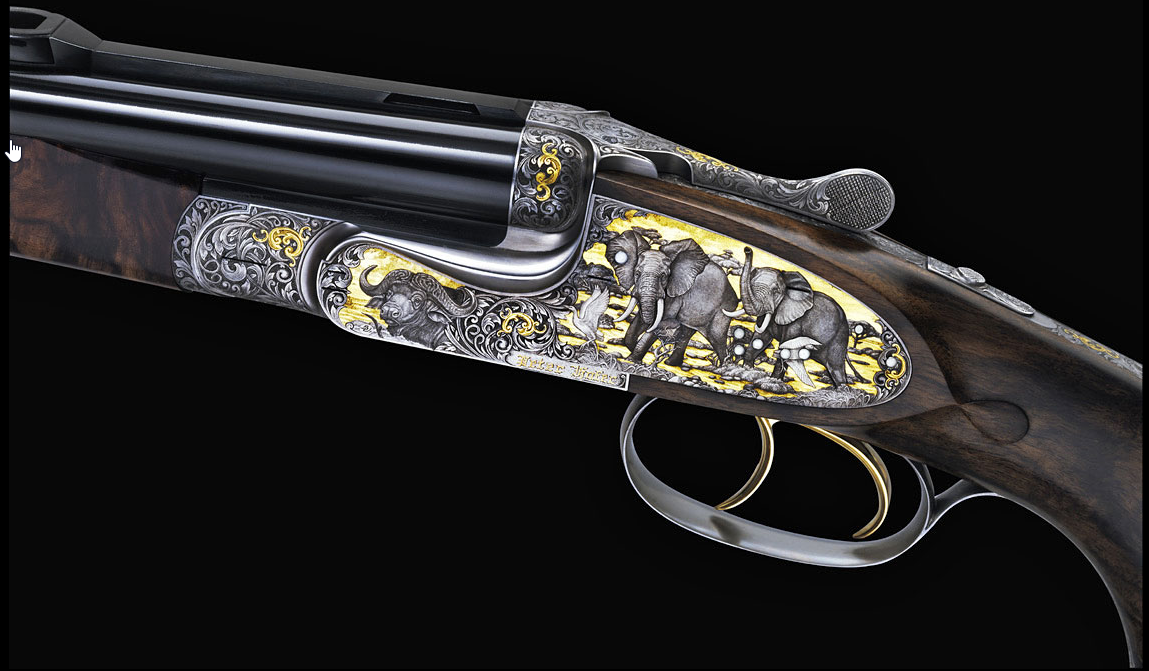 The FFAL index to assess a rifle