This cartridge is a very good compromise between killing power, usability and availability of rifles and components. Its is a perfect cartridge for hunting all species in Africa from elephant to plains game as small as duiker. For this range of use you only need two loads. Many professional hunters are relying on this caliber. Some manufacturers are now offering factory loads and also factory rifles are on the market.

-The supply of belted cases and .458 diameter bullets is plenty compared to other big game cartridges. New on the market are Hornady factory loads and properly head stamped brass as well.

-It is very easy to convert rifles, esp. .458 WinMag to this caliber. Because there is no standardization, Lott and Watts are often mixed up. Modern reamers for the Lott are with a case length 2.850". Another improvement of the Lott concept is the forming of a "ghost shoulder" providing a parallel neck. The resulting OAL of 3.650" fits in magazines of most rifles used for conversion. The magazine capacity keeps the same and is usually 3 to 4 rounds and more than with the bigger cases. The Lott is the most powerful cartridge based on the case head diameter of the H&H belted case.

-With 400 gr bullets you can develop loads for plains game, which show a flat bullet path and a point blank range up to 225 yards. With a good readjustable scope the rifle is appropriate for the "one rifle safari"!

-With a good recoil pad the rifle´s recoil is manageable and the weight still below 10 pounds, so you can walk with it for hours in the heat of Africa.

-In emergency, you can use .458 WinMag cartridges and a lot of safari camps in Africa have some Lott ammo kicking around.

Penetration is a very complicated matter and test results are highly dependent on the methodology and and the test medium used. The only value of artificial target media such as wood, wet paper, gelatine and others is to compare one bullet to another in that particular medium. Plywood and shooting into baffle boxes has little bearing on penetration in animals.

Penetration in big game is often limited by the stability of the supercavitation bubble and unexpected bullet paths as reported often in big animals is due to this effect.

The supercavitation itself is not primarily responsible for more or less penetration. It only keeps the rotational stabilization going on, without supercayitation it would stop by friction. When the bubble collapses, the unstable bullet normally will veer off, in my terms penetration has stopped. By chance the bullet may go a bit further, it is not exactly predictable. There is no non cavitating bullet, but different bullet design shows different duration of the cavitation bubble. The Kynoch profile shows about 70 cm stable penetration, the SuperPenetrator, optimized for animal tissue, about 250 - 300 cm. You don´t need this extreme penetration under normal hunting conditions, but it shows very stable penetration in game and no deviation, tumbling, bending or fishtailing and a up to fourfold penetration length in animals. The research on stable penetration of hunting bullets was not done with the intention to introduce new bullets on the market. It was done just for a discussion with ballisticians, who claimed the impossibility of straight line penetration with RN bullets. 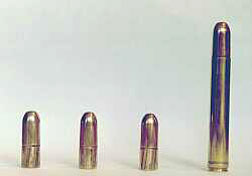 This loads with an appropiate scope are an ideal combination for all game in africa from baboon to elephant!
Last edited by a moderator: Dec 1, 2016
Norbert Hansen
www.grosswildjagd.de
You must log in or register to reply here.