The "Campaign to ban trophy hunting"

Forgive me if this sounds a bit disjointed, but I'm writing this on the go! I must bring to your attention to today's online headlines of The Mirror (see: https://www.mirror.co.uk/news/uk-news/wealthy-brit-revealed-one-most-14151635.amp) where the "Campaign to ban trophy hunting" has identified and villified an individual hunter: 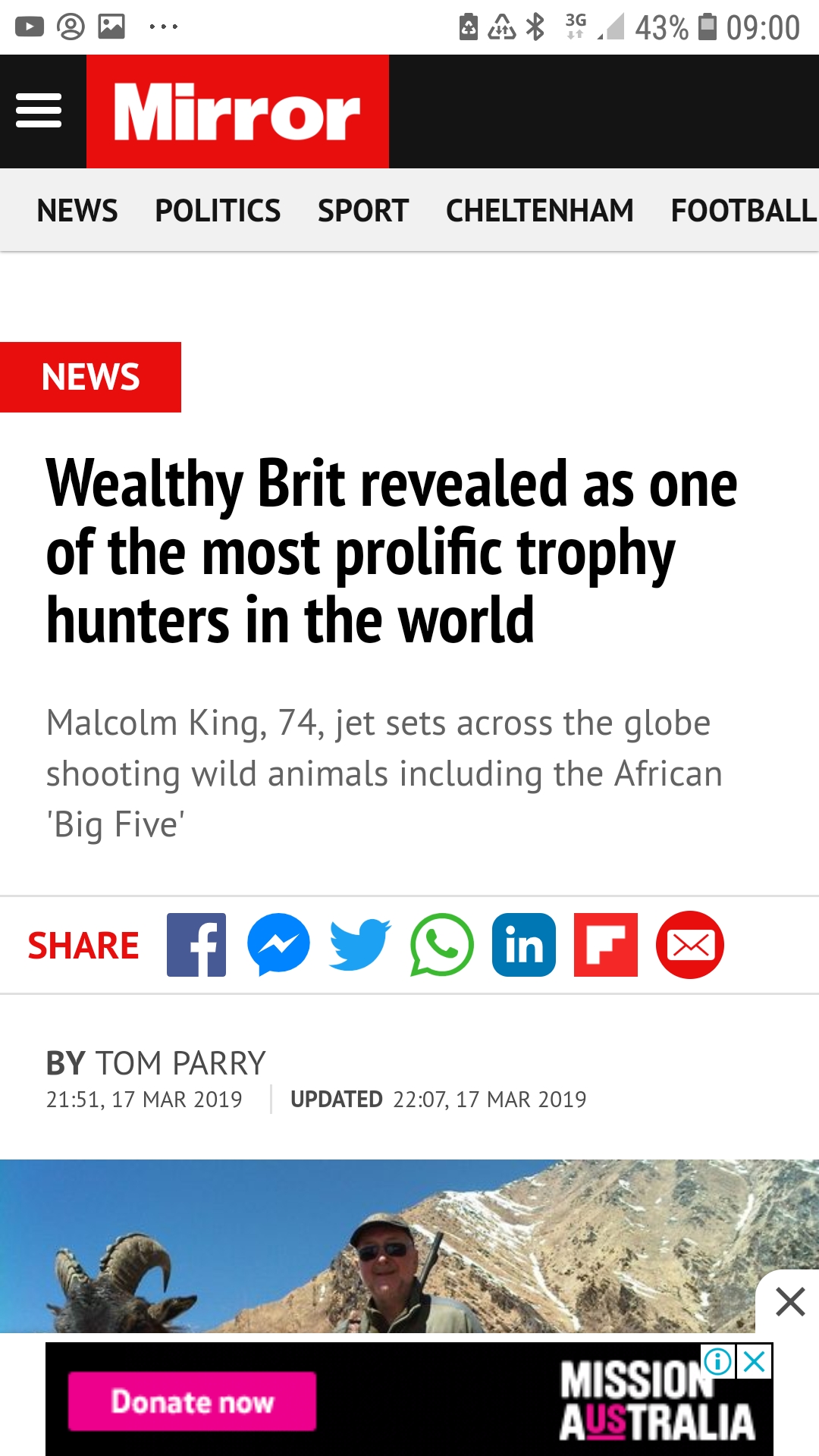 Without going into an examination of the minutiae, this report is loaded (no pun intended) with the usual overt bias and slurs to influence the ignorant masses such as: "travels around the globe shooting wild animals for fun", and that he: "is among the world’s ‘elite’ big game hunters – very few have amassed so many of the industry’s obscene awards".

Only at one point in this prejudiced report is a brief response permitted from this legitimate hunter. It ends with another biased quote: "The CBTH said 1.7 million animals have been killed by trophy hunters in the past decade, of which more than 200,000 were endangered species."

Personally, I'd like to know where they get their data, and if these 200,000 "endangered" animals is a misrepresentation of that legitimately hunted within agreed quotas? Anyway I looked up the "Campaign for the ban of trophy hunting" bantrophyhunting.org/about and their site quotes a lot of figures, which one must reasonably question as they've even posted up an essay from a 14yo kid!! No doubt they regard this kid is an "expert"!!

Nowhere did I find any reference to my oft' quoted fact: "The WWF Director General, James Leape, stated publicly on DVD: "Hunting species in a sustainable way will continue to be a part of conservation - and should be!" (BBC DVD, 2006, "Planet earth", Episode 14, "Living together")" Perhaps this little fact doesn't sit right with their agendum!!

Anyway, I'd implore all members to make an online response outlining this sites bias and hypocrisy - as it's only by us showing a united front, and that we won't stand for this lying down (Huh?) - that we can defend our sport, and the proven positive impact sport hunting makes upon conservation.

IMO as this is another prejudiced attack by the antis, maybe we should all take the fight back? Any ideas? I've responded by highlighting their hypocrisy as being a part of society which condones the operations of abbatoirs, the plethora of televised fishing and cooking shows - and all without a single uttered word in protest!!

I'd first of all suggest, NOT linking these organizations web page, FB pages anywhere. It only promotes them.

That's funny, I thought the wealthy Brit and prolific hunter was Dudders......

He's a Jet setter for sure.

Please do not misconstrue my suggestion to remove hyperlinks from replies as criticism of a well thought out reply to any Anti Campaign.

xyz biased muppets VS www.xyzbiasedmuppets.com
(note that many websites will automatically create a hyperlink if you use the www format. This address is a dead end, but a Hyperlink is still created.)

The more references and links the higher up the search chain you climb.

The more they reference AH on their sites and in their posts the higher AH goes up the Google ladder. So, post more conservation content here to AH to be read by the new visitors.
Last edited: Mar 18, 2019

If they only knew !

The thing they do not realise is, If they ban the import of trophy's I will still go hunting it will not stop me.
Last edited by a moderator: Mar 18, 2019

It just reduces the taxidermy bill.

I love my mounts, but they are not the reason I hunt. 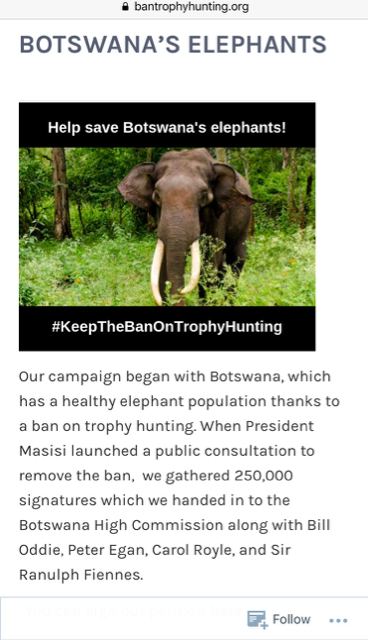 I mean come on......... the least the creator of this website /administration person could do is a simple google search of the correct elephants that they are trying to save would help,
Unless there is a special some something in the water in Botswana or I have photographed thousands and hunted a handful of the wrong types of elephants on my home continent.

YA getting to the point where taxidermy may take a back seat. But not just yet!
Tommorow is promised to no one. Go live your dreams.

LivingTheDream said:
@johnnyblues I had to read your post 3 or 4 times, I'm still not 100% sure it is you, lol.
Click to expand...

LMAO
Tommorow is promised to no one. Go live your dreams.

Between the wrong ele in the photo, and the claim the population is healthy due to a lack of trophy hunting

, you can really see how desperate they are.

Help me out here what is actually listed as endangered that is allowed to be hunted by western hunters? I can only come up with Black Rhino. White Rhino and lion are threatened as per USFWS. What am I missing?
Now I know their numbers are totally fabricated.
Philip

Philip Glass said:
Help me out here what is actually listed as endangered that is allowed to be hunted by western hunters? I can only come up with Black Rhino. White Rhino and lion are threatened as per USFWS. What am I missing?
Now I know their numbers are totally fabricated.
Philip
Click to expand...

The E in CITES stands for Endangered. I think it this case anything with a conservation status of Threatened which included Vulnerable, Endangered and Critically Endangered would count. The only animals not are near threatened and least concern.

In the end, we know the larger problems are habitat loss and local extinction. Wherever there is a healthy population, utilization helps the species(and the other species that benefit from the habitat being protected.)

Here’s the chap who wrote the article. I sent a quick polite message. I urge others to do so to

https://www.facebook.com/TomParryUK/
You must log in or register to reply here.